Jeff and I left Highlands Ranch, Colorado, at 3:30 and arrived in Eureka, Colorado, around 11:00 after having breakfast at Starvin' Arvin's in Montrose, Colorado.  We changed into climbing gear and made our way up the canyon with intentions of climbing First Gully since we were denied by the route a couple years ago due to limited ice.  As we turned the corner, a party was on the second pitch of First Gully.  We continued up the valley to climb Second Gully, but there were at least two parties still on this climb.  We looked to the right at Goldrush and climbers were also on this route.  We turned and looked across the valley to see a party bail off the first pitch of Stairway to Heaven with nobody else around.  So we decided to head over and take a look at this classic ice climb in southwest Colorado.

Jeff led out at 12:30.  Pitch 1 consists of two curtains with easier ground above both steeper sections.  Despite the standard ratings, we definitely thought the second curtain was WI3+.  The pitch was a full 60 meters, and the first belay was at bolted anchors directly in the middle of the climb.  Jeff also took pitch 2 which was generally easy ground with only two shorter WI3 steps that led to a large tree belay to the right of the start of pitch 3.  This was also a full 60 meter pitch.  Fortunately for me, the crux pillar was fairly coned out which shorted the WI4 climbing of pitch 3.  After the pillar, the grade eased to WI3 and there was a bush belay on the right which I backed up with a couple of screws.

A this point, we were feeling pretty good about our progress given the generally late start we had and decided to continue climbing.  Jeff took pitch 4 which was probably the easiest of the five pitches we climbed.  It starts out on WI3 for about one-half of the climb and then gives way to a bit of snow slogging to bolts on the right side of the base of the final pitch.  Pitch 5 was extremely wet, and after I got two-thirds of the way up, I radioed down to Jeff and told him I didn't think it would go.  I think he was a bit surprised and told me to do what I thought was best.  Fortunately, I didn't and decided to try and finish the climb.  I buried the biggest screw I had in solid ice, pulled my hood over my helmet for protection, and ran out a steeper chimney of WI3+ for about 20 feet in the wettest ice conditions I've ever climbed.

Although the water was literally poring down the ice, my soft shell pants and jacket did fairly well keeping my core dry.  I was happy and satisfied that we completed the climb considering it was late in the day and relatively challenging for the two of us.  I built a three screw anchor to bring Jeff up on and suggested on the radio that he climb fast.  When he got to the shower section of the climb, he understood what I was talking about.  When he pulled over the lip, I asked if he brought his snorkel with.  Jeff reached the top anchor at 3:45, so given our abilities we climbed fairly efficiently with quick belay changes and no mistakes.

All five pitches were a full 60 meters.  Since it was late in the day and nobody was below us, we decided to rappel the route.  I built a deep V-thread at the top of pitch 5 to get us to bolts at the top of pitch 4.  We rappelled pitch 4 to the frozen bush belay.  From the bush, we made it to the huge tree near the pillar at the bottom of pitch 3 which took us to the other set of bolts above the first pitch and back to the base of the climb.  The five rappels took an hour, so we were hiking out by 4:45.  After hiking out and checking into the Prospector Motel, we headed over to Mother Cluckers for dinner and a few beers. 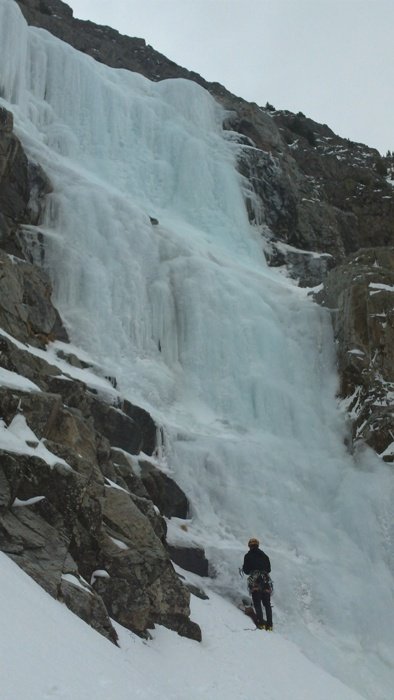 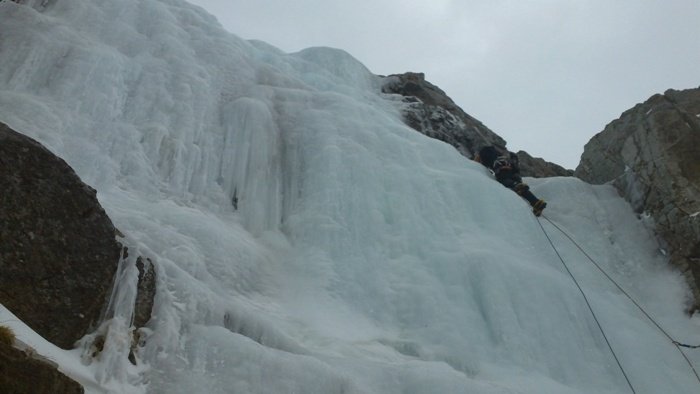 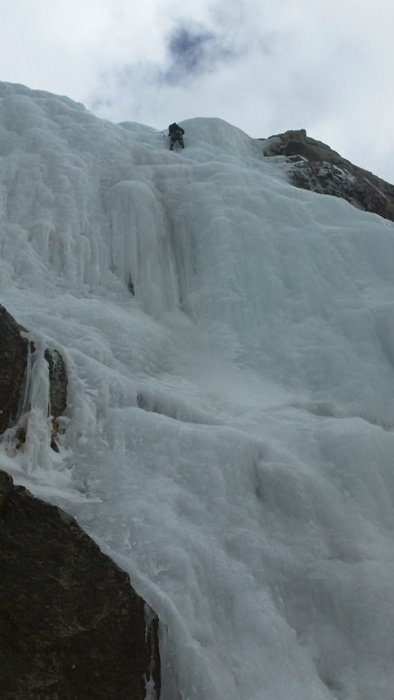 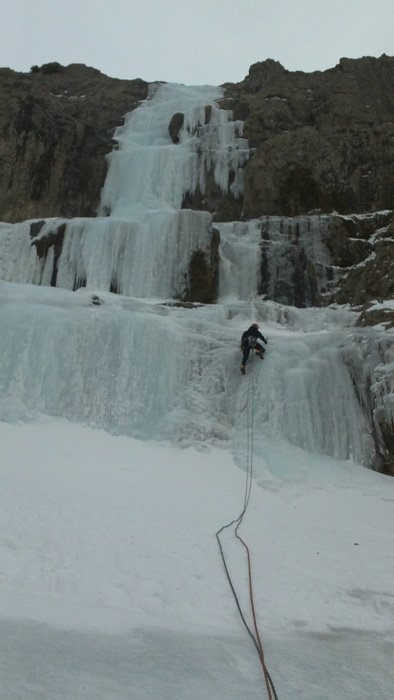 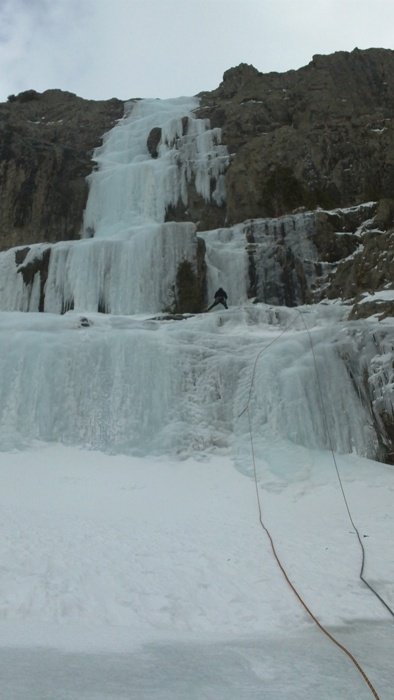 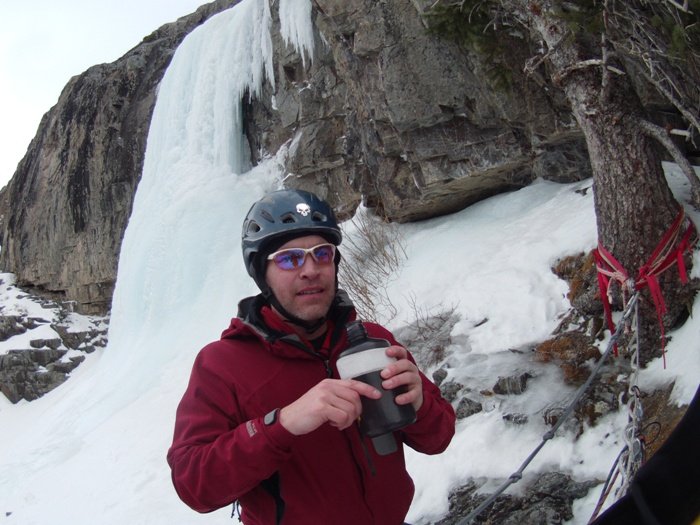 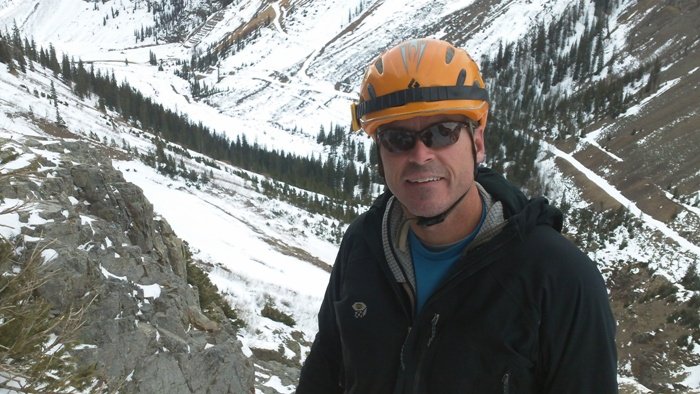 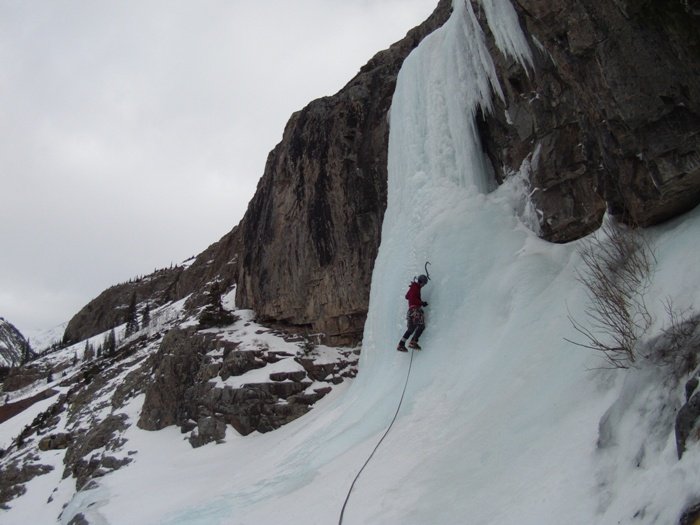 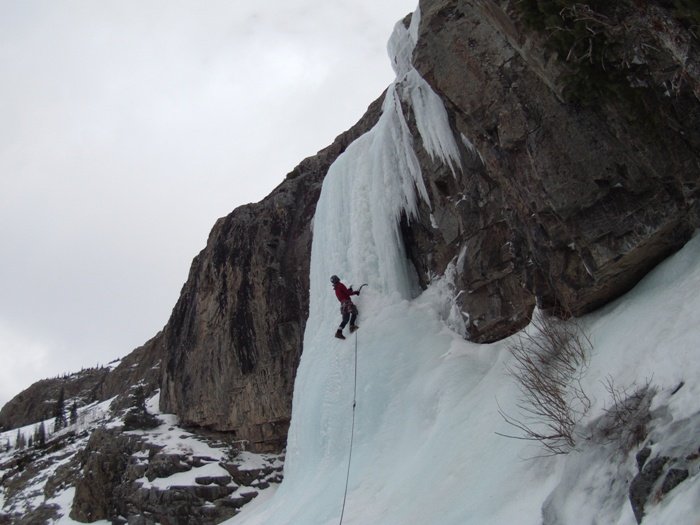 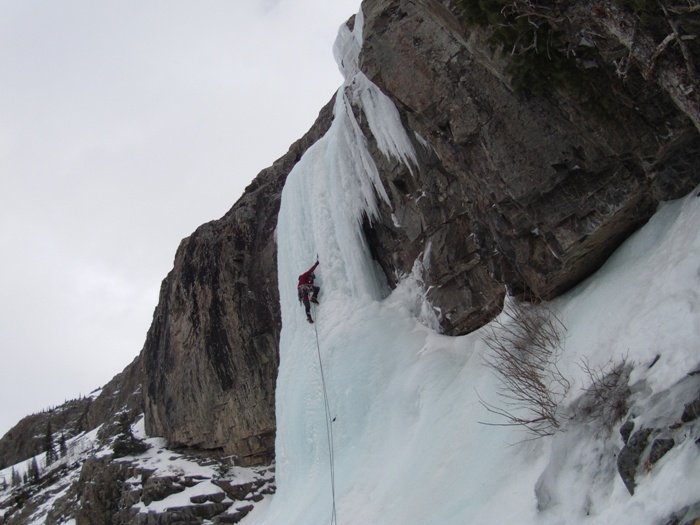 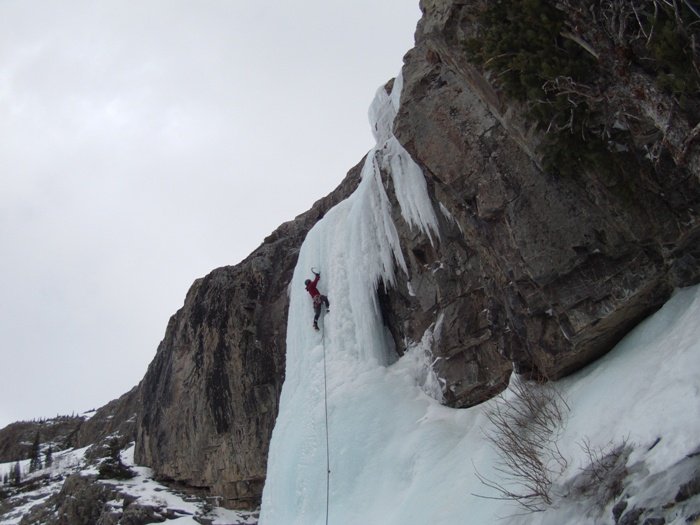 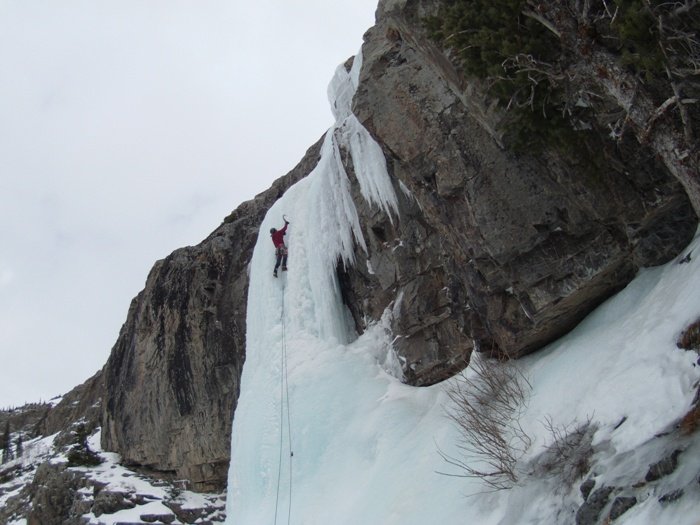 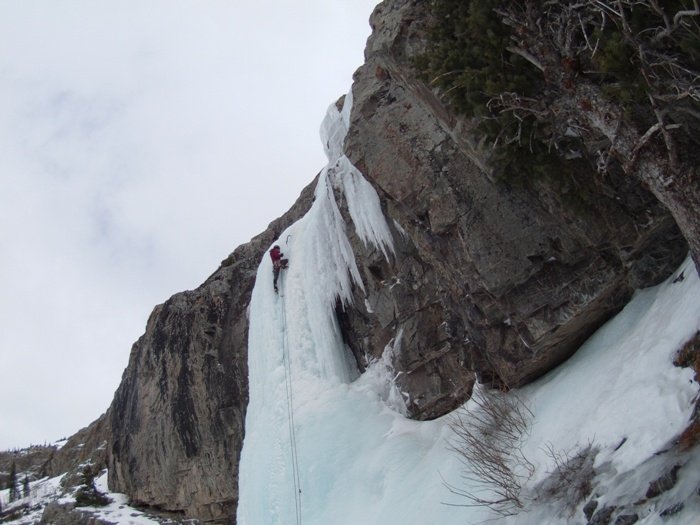 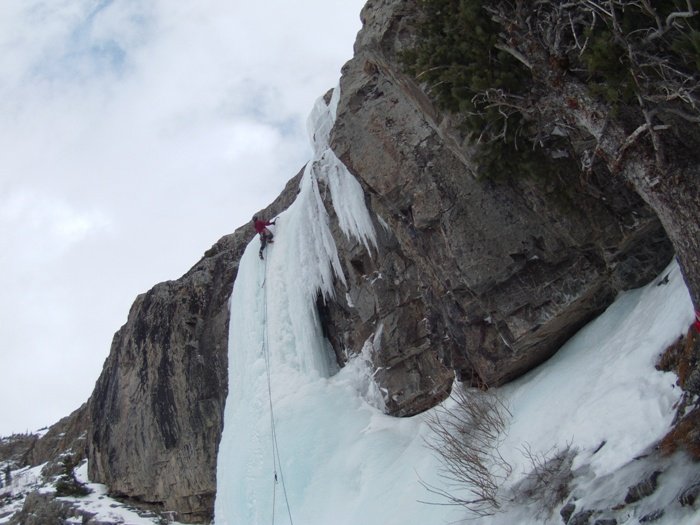 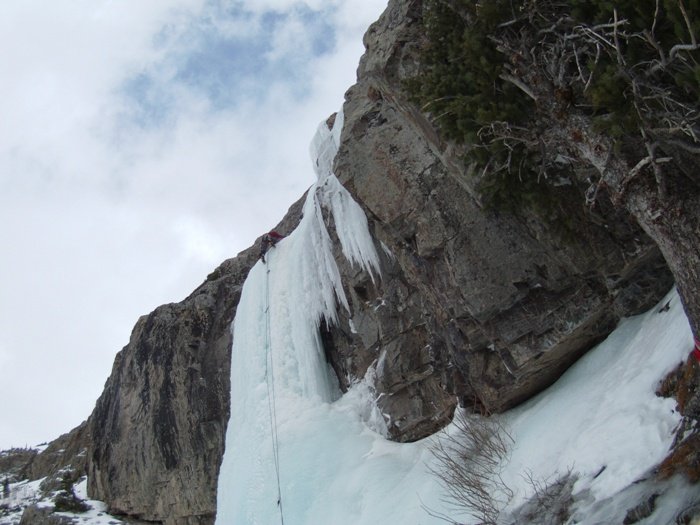 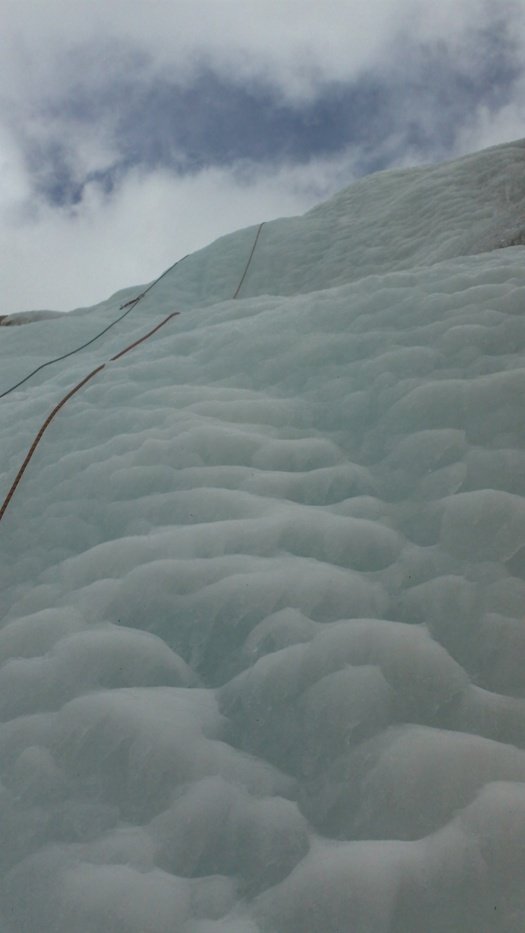 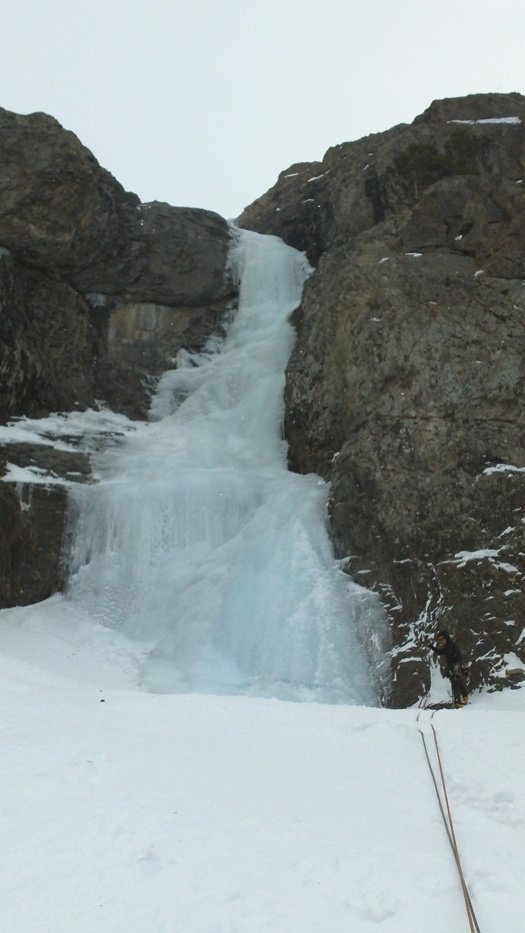 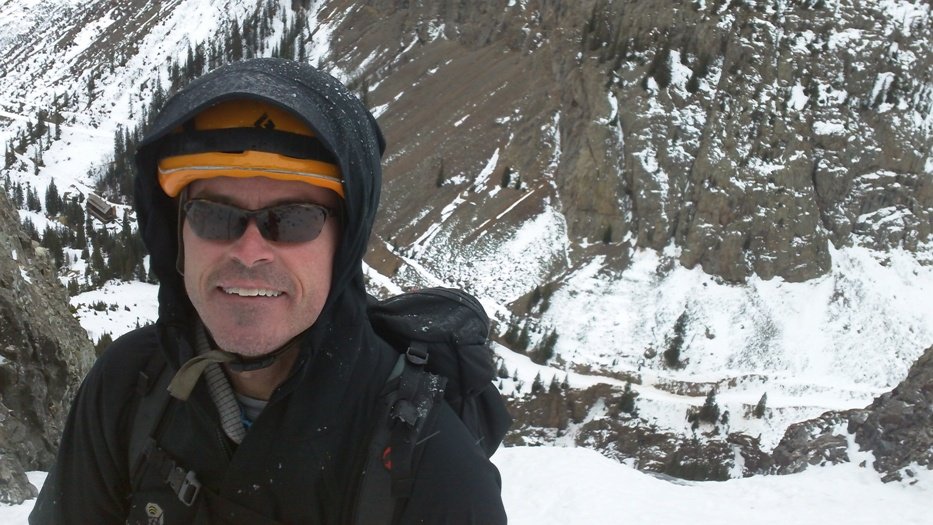 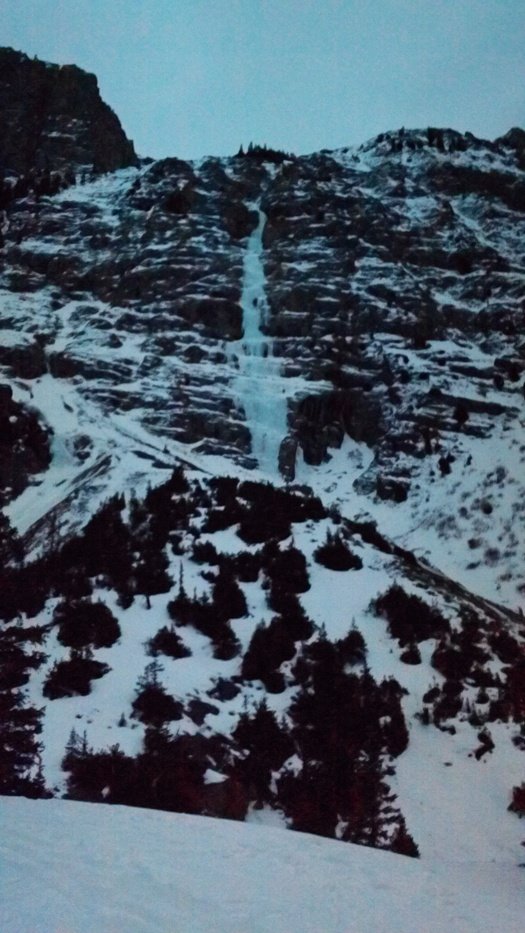