We climbed the Northwest Couloir and descended the South/Red Couloir of Crestone Peak from 9,800' on the road leading to the South Colony Lakes Trailhead.  Although Ferenc is listed as a hiking partner, Aaron and I were with him only for the backpack in and approach to South Colony Lakes.  After ascending the Northwest Couloir, he completed the traverse to the Crestone Needle and then tagged Brokenhand Peak for good measure too.

Our trip to Crestone Peak was thwarted early by two downed trees that blocked the South Colony Lake Road at 1.5 miles.  After transferring all my gear to my expedition pack, we started towards the upper four-wheel-drive parking lot at approximately 8:00.  The few miles to the upper trailhead, although unexpected, went quickly and we set up camp in the dark and prepared for the next morning.  We planned on waking at 4:00 for an alpine start.

We started as scheduled, and the trail to Lower South Colony Lake was almost entirely snow covered.  Once at the Humboldt Peak trail junction, we ascended the switchbacks to the saddle west of Humboldt Peak at 12,860'.  At this point, we started hiking west and skirted Point 13290 on its south side.  This portion of the hike proved to be more challenging than expected, and we definitely found ourselves in several sections of class 3 scrambling.  The wind was rather strong which unfortunately drained my energy and hindered progress.  Nevertheless, we finally reached the Bear's Playground and made the final approach to the base of the Northwest Couloir.

I previewed the coulior from Saguache, Colorado, the previous day and it appeared as though it contained continuous snow.  Sadly, this wasn't the case and the couloir was melted out for approximately 150' near the base and again about two thirds of the way up for 200'.  Nevertheless, we had a pleasant climb in the snow and worked our way through the rock when encountered.  The initial rock wasn't too bothersome, and the first extended section of snow was great climbing.  The larger section of rock in the middle was a bit more tricky and both Aaron and I felt there were a couple of class four moves to contend with.  After this rock, the snow was finally continuous to the notch at 14,180'.  The final section was an exciting ascent as the snow narrowed down to a very narrow and steep chimney.

When we reached the notch, Teresa Gergen and Kirk Mallory were there to greet us.  We said hello as they started their descent down the Red/South Couloir.  Aaron and I scrambled to the top of Crestone Peak.  Surprisingly, we ran into Mark and Sarah Richardson with whom I had just climbed the Y Couloir on Pikes Peak.  We visited a while, and then they were off to complete the traverse with Ferenc.  After our summit photos, we went back to the notch and I quickly scrambled up to the East Summit of Crestone Peak.

Although less steep than the Northwest Couloir, the descent down the Red/South Couloir was relatively challenging based on snow conditions and our fatigue.  We glissaded when we felt comfortable, and soon found ourselves at the base of the couloir looking up at a 700' climb to Brokenhand Pass.  There is a trail, so it was tolerable for the most part.  The northeast side of Brokenhand Pass still contained a lot of snow, so we plunge-stepped and glissaded.  The hike back to the four-wheel-drive trailhead seemed much longer that the approach.  It ended up being a 10 hour day for us. 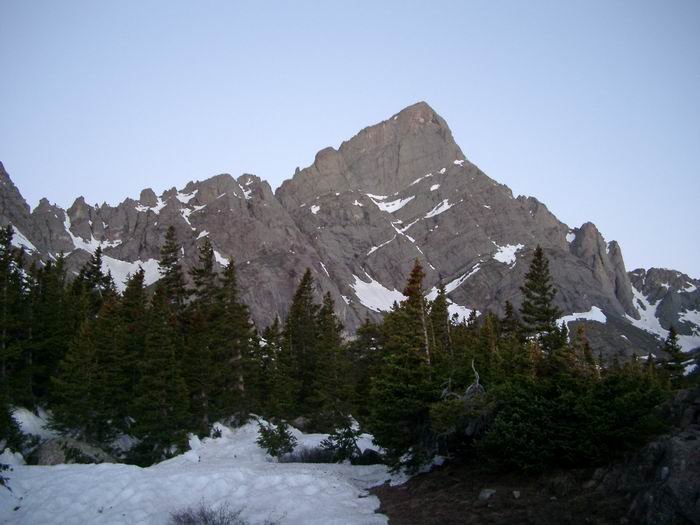 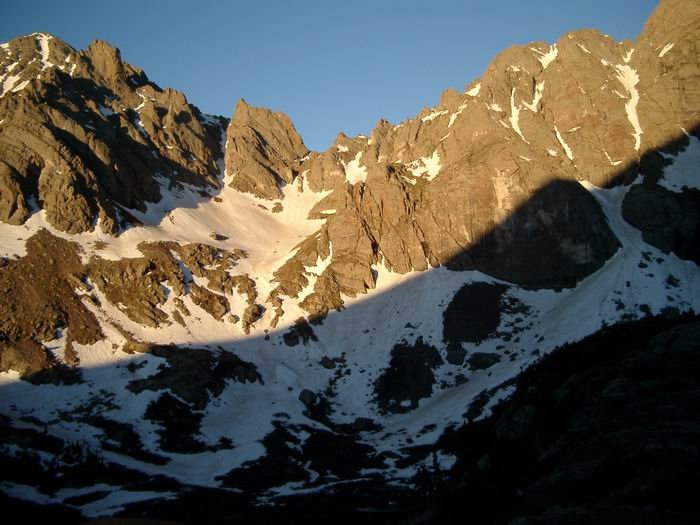 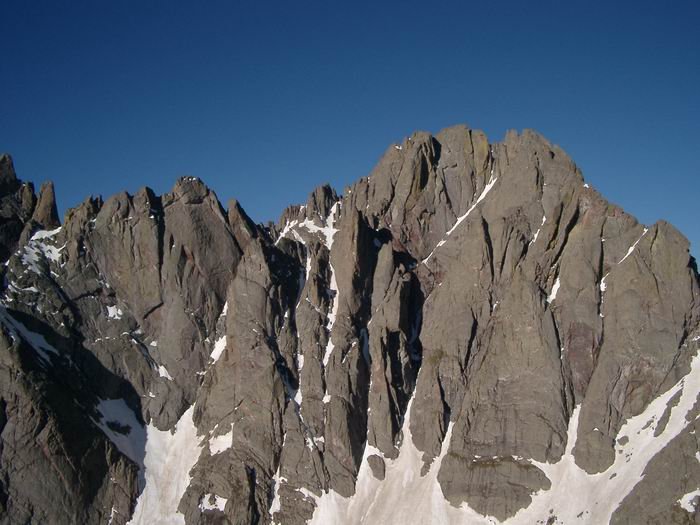 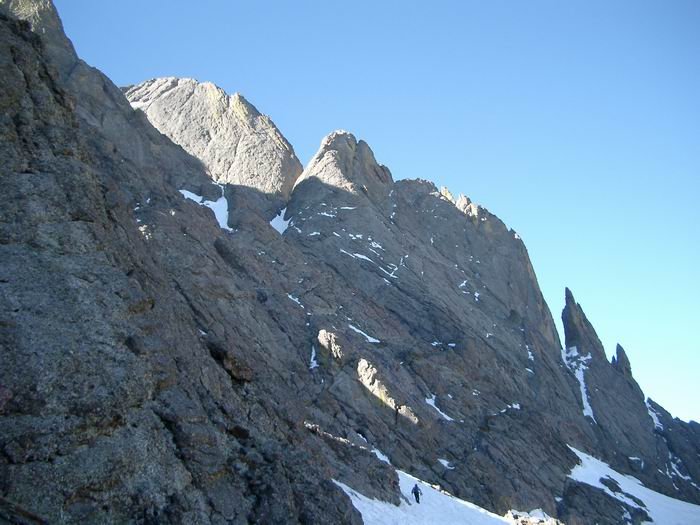 Traversing to the base of the Northwest Couloir. 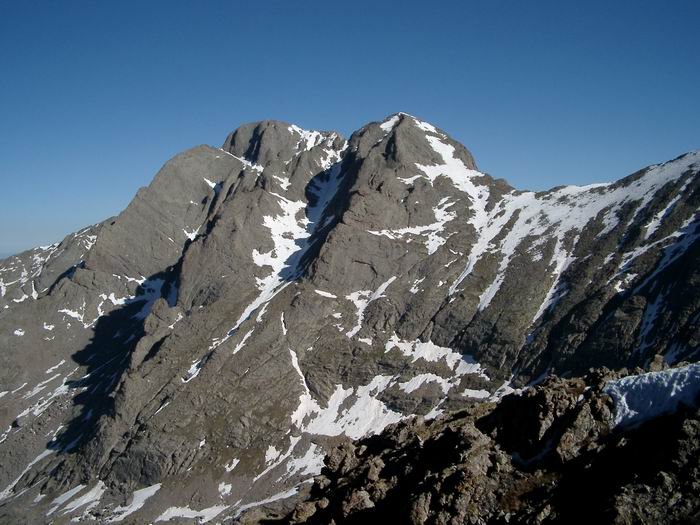 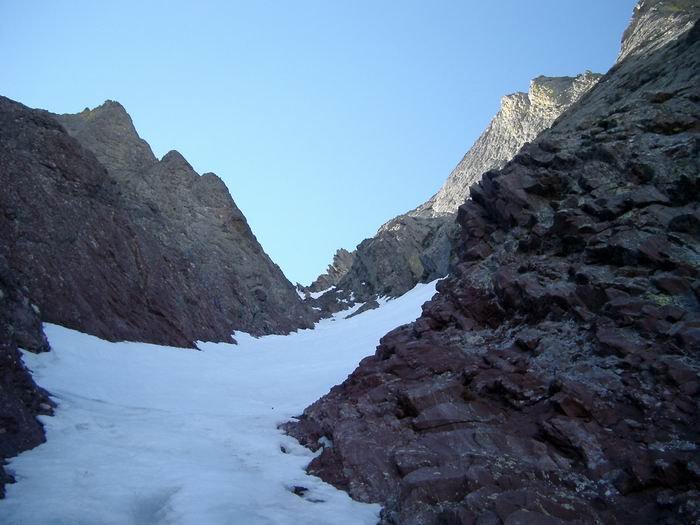 Looking up the couloir from the base of the climb. 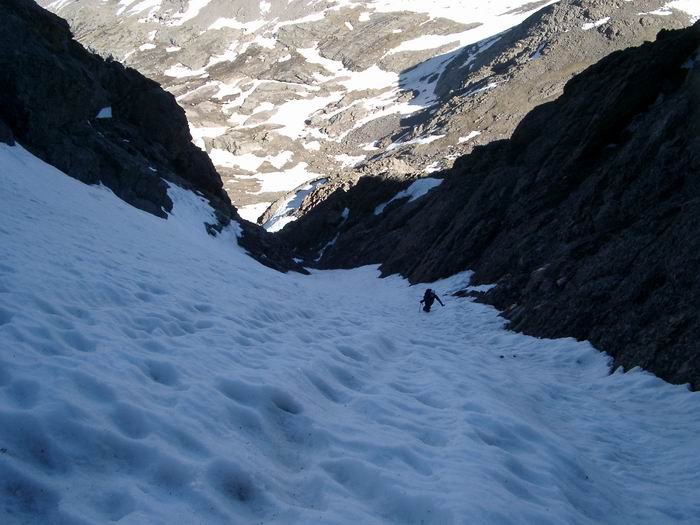 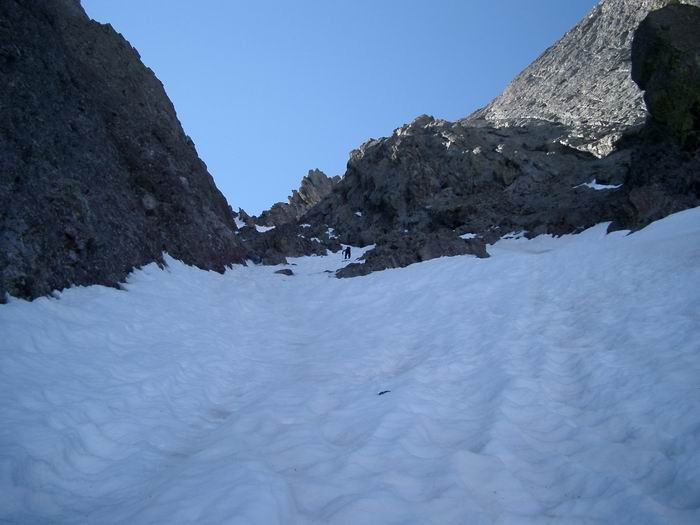 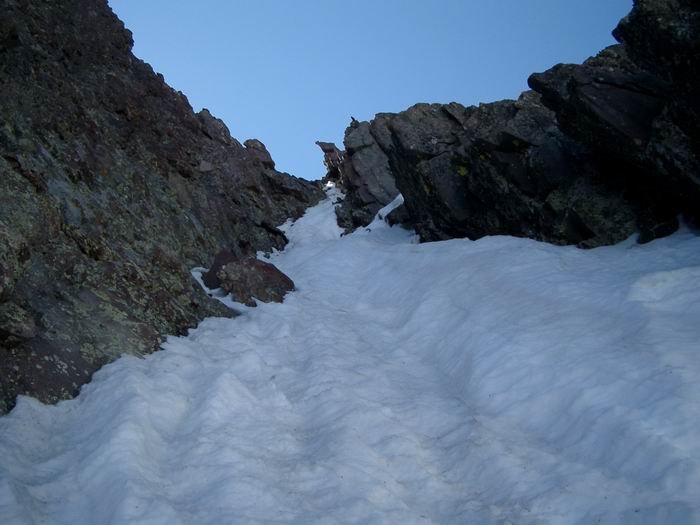 Narrow exit of the Northwest Couloir. 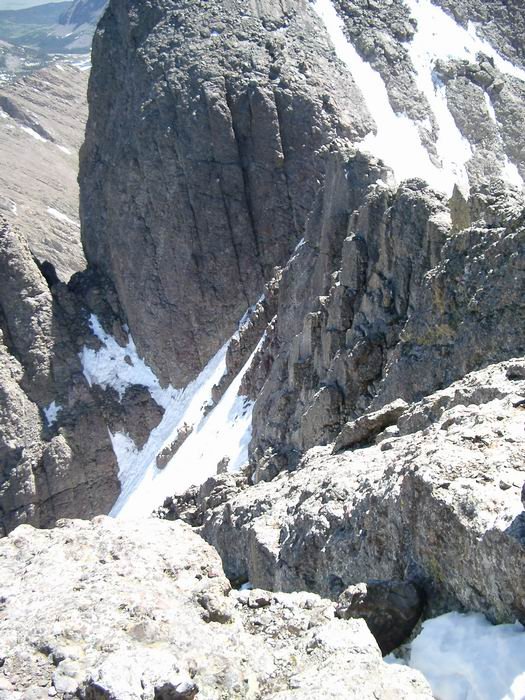 The upper section of the couloir from Crestone Peak. 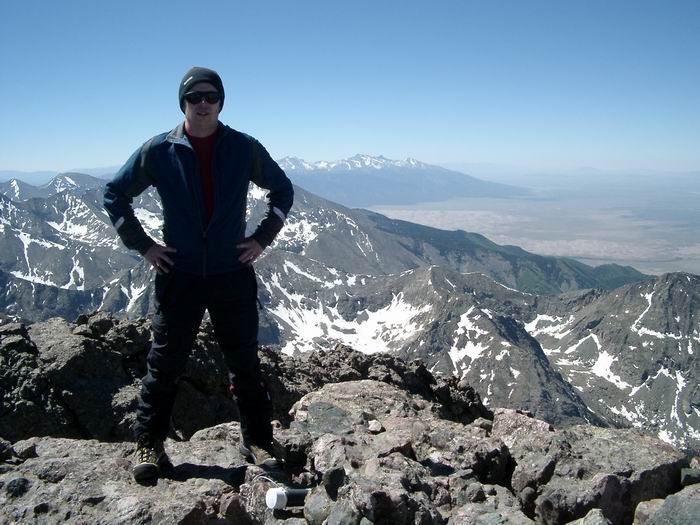 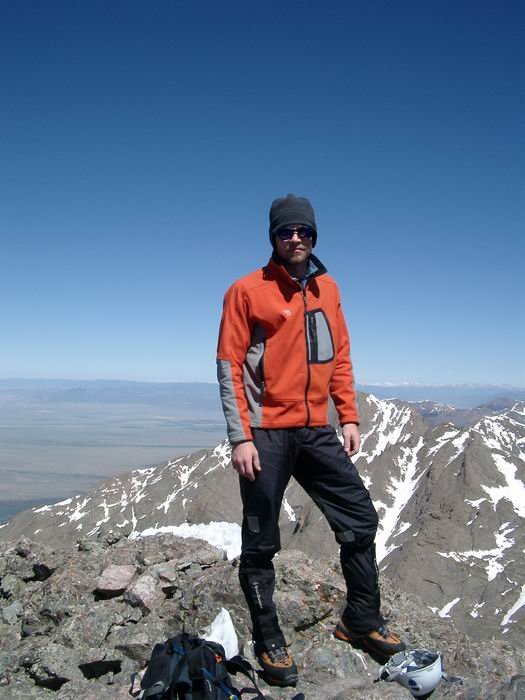 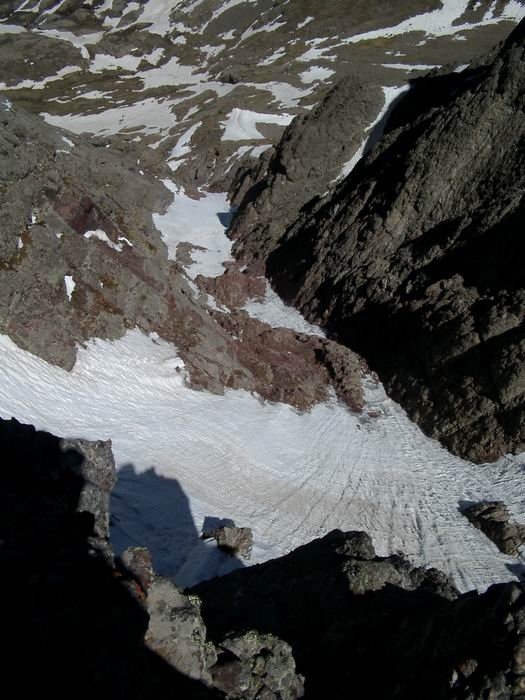 Looking down the entire length of the couloir from the notch. 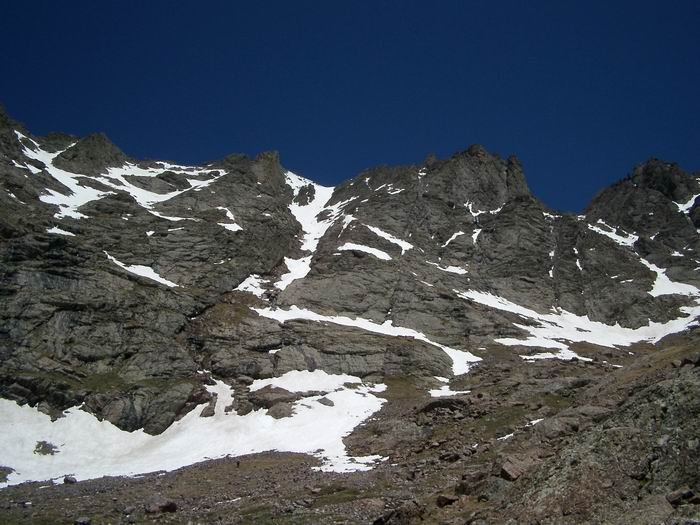 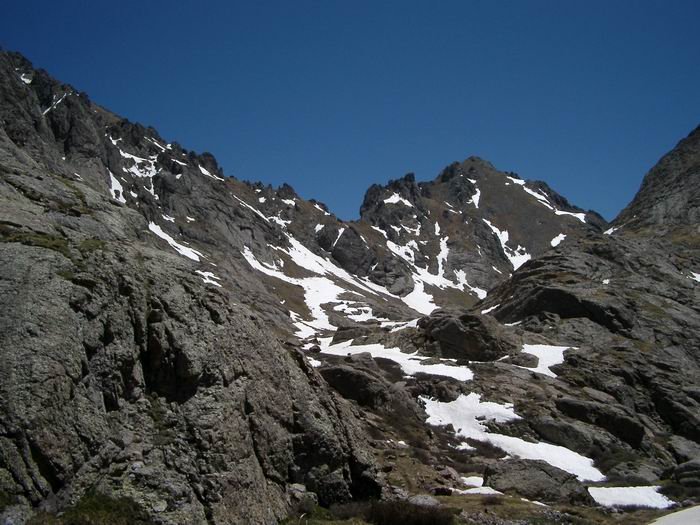 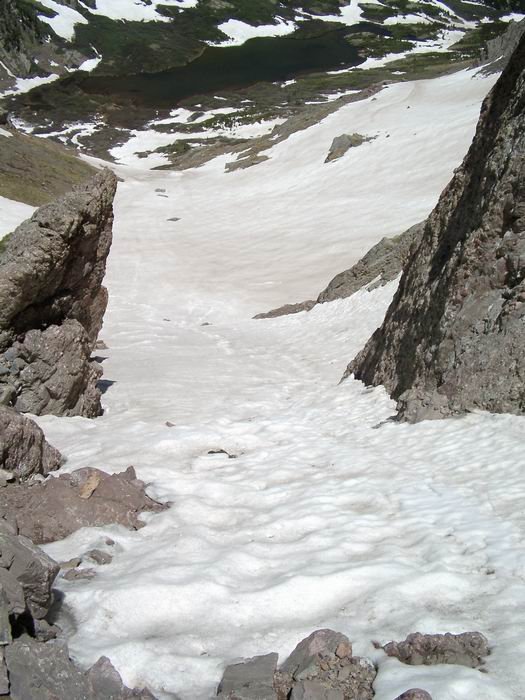