President Bush gave Federal government employees Friday off for former President Reagan's funeral, so I decided to honor him by trying to climb a mountain.  I left Highlands Ranch, Colorado, around 3:40 in the afternoon and was at the Willow Lake Trailhead shortly before 8:00.  I was initially going to day hike these peaks, but at the last second I thought I would try and break up the trip and backpack into Willow Lake.  After rearranging all of my gear, I left the trailhead at 8:20 and was able to avoid using a headlamp for almost an hour.  The approach to Willow Lake is on a well-maintained trail with a relatively gentle grade of 15 percent.  There are numerous switchbacks and I found the path easy to follow.  Despite this, the weight of my pack slowed me considerably.  I am more used to a 20 to 30 pound daypack, so my pace was automatically adjusted quite a bit.  I took a 20 minute break at 10:10 to take my final insulin shot for the day, get a drink of water, and put on my soft shell.  The wind had picked up and the temperature had dropped to the point where I was getting slightly chilled.

I determined that I was approximately 600 vertical feet from the lake, so I pressed on.  More switchbacks, more wind, and more darkness.  By 11:20, I crossed a sign that stated there is no camping within 300 yards of the lake, so I figured I had arrived.  I hiked for another 15 minutes and then set up my bivy, sleeping pad, and sleeping bag.  I fell asleep around 12:15 to a starry sky.  Although my alarm was set for 4:00, I sharply awoke at 3:45 only three and a half hours after falling asleep.  It was still dark and the wind was blowing loudly.  Not wanting to fall back into a deep slumber, I lightly dosed off as my alarms systematically woke me over the next 45 minutes.  I was hoping the sun would come up and wind would die down.  Finally at 4:35, I organized my daypack and grabbed a quick bite to eat.  Even though it wasn’t light out yet and the wind was still blowing, I figured it was now or never so at 5:05 I started to climb to the benches above Willow Lake.  This didn’t take me long as I had unknowingly hiked to the northeast corner of the lake the night before.

By the time I was above Willow Lake, I was able to see the route ahead and look back to the approach from which I had just come.  Willow Lake and the basin below Kit and Challenger are amazing and beautiful areas.  After surveying the mountain, I determined that the Kirk Couloir appeared to have sufficient snow for a safe climb.  I began traversing below the northeast side of Challenger Point to reach a large snowfield at the base of the couloir.  The snow conditions were favorable and my crampons bit into the snow perfectly.  The climbing was straightforward until around 13,000’ where the Kirk Couloir becomes steeper and narrow.  The guidebook states that the final 800’ of this couloir is 48 degrees.  When I reached this section, I changed my climbing technique to front-pointing with my ice axe in a high-dagger or low-dagger position.  This was the first time I had used the pick of my axe for climbing in this manner.  I enjoyed this portion of the climb a lot, but am fairly certain that I wouldn’t want to be on terrain much steeper without protection.  The couloir eased up as you approached the top and was also melted out near the 13,780’ saddle between Kit Carson Peak and Challenger Point.

I removed my crampons and took a break as I caught my first glimpse of the mountains to the south.  I didn’t cache any gear, because I wasn’t sure what the remaining route looked like.  After reaching the 13,940’ saddle between Kit Carson Peak and The Prow, it became obvious that I was going to be able to negotiate Kit Carson Avenue without crampons.  I utilized the ledge to the southeast side of the mountain and gained the east ridge in relatively short order.  It wasn’t long before I was on the summit enjoying the views of Willow Lake, the Crestones, and Challenger Point.  It was cold, so I didn’t stay long and started my descent.  I circled back around the peak and unfortunately missed Kit Carson Avenue on the way back.  After getting hung up on some nasty cliffs, I looked up and saw my error.  I regained the ledge and was back at the 13,780’ saddle after crossing a few small snow bridges.

With only 300’ to go to get to Challenger Point, I felt satisfied with my hike and progress for the day.  I took a few more photos on top of the point and started down the north slopes.  I stayed on the ridge until I came across another snow-filled gully to the west that I decided to descend.  This ended up being a mistake.  I hit a wall physically, the snow was too sun cupped for a glissade and also too soft for my crampons which immediately began balling up.  I struggled down the snowfield and finally made it back to Willow Lake.  I took some photos of the large waterfall at the east end of the lake, repacked all of my gear, shouldered my somewhat lighter backpack, and headed out.  The hike out was arduous and my knees took a beating.  Despite this, I enjoyed the scenery which I was unable to view the previous evening because of my late night hike in.  I drove back to Denver and began packing for the weekend which I spent in Estes Park, Colorado, and Rocky Mountain National Park hiking with my family. 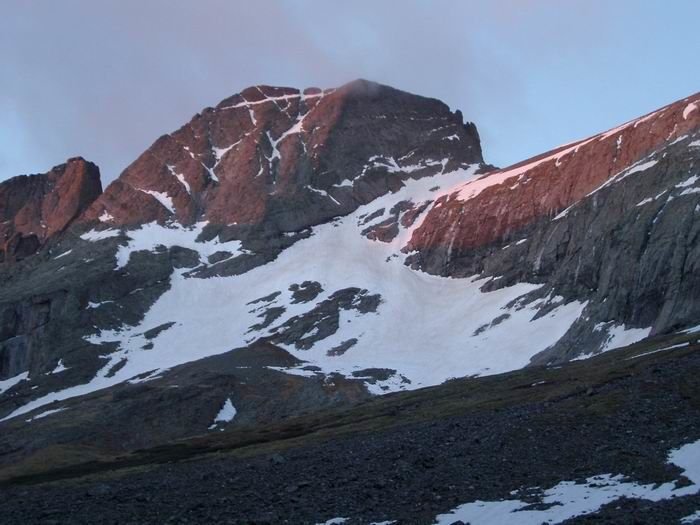 Kit Carson Peak and the Kirk Couloir from the benches above Willow Lake. 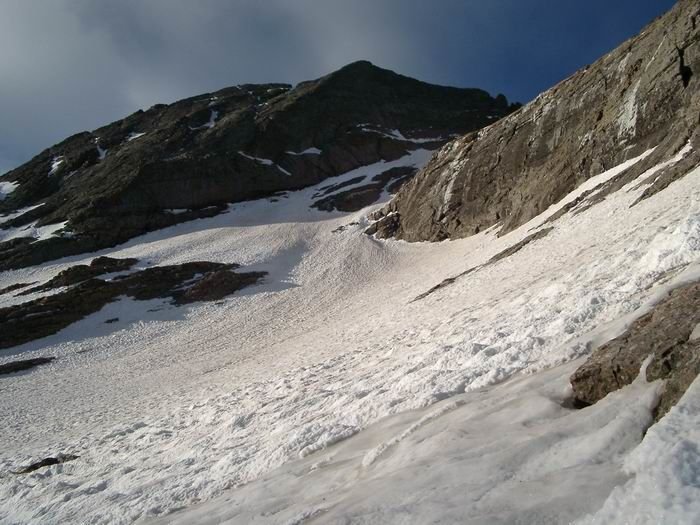 Approaching the base of the Kirk Couloir. 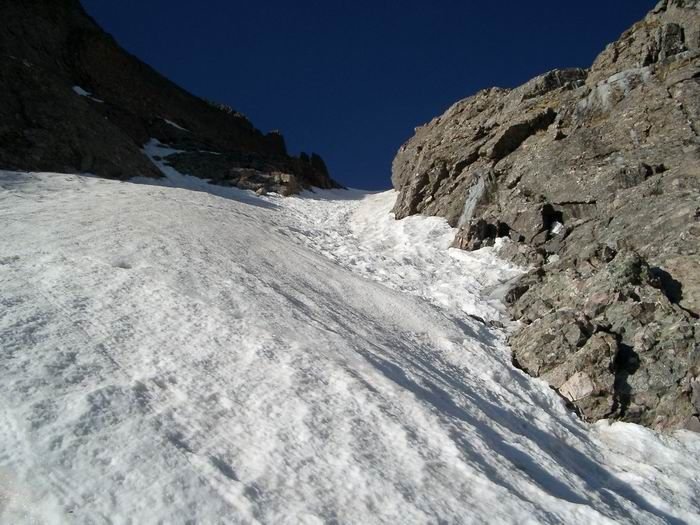 Looking up the Kirk Couloir. 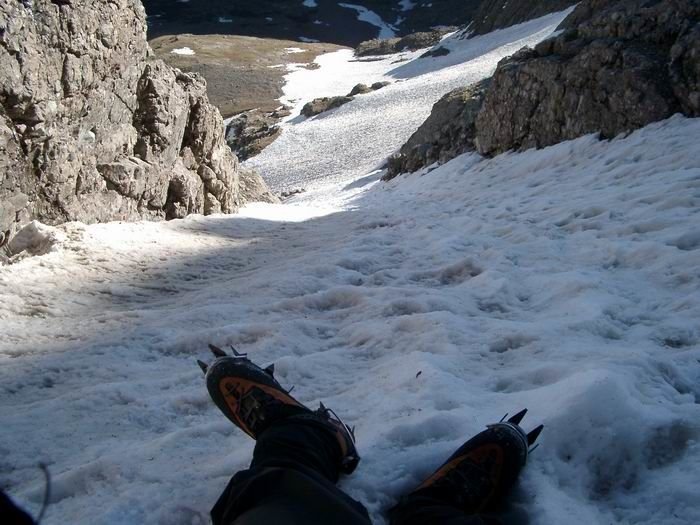 Looking down the Kirk Couloir. 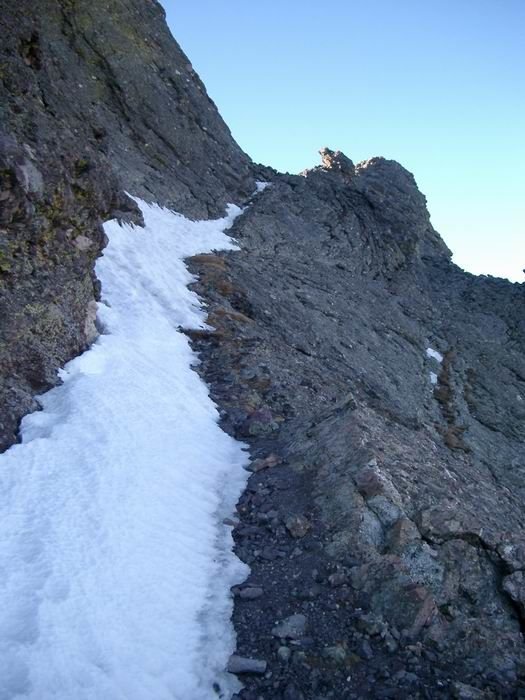 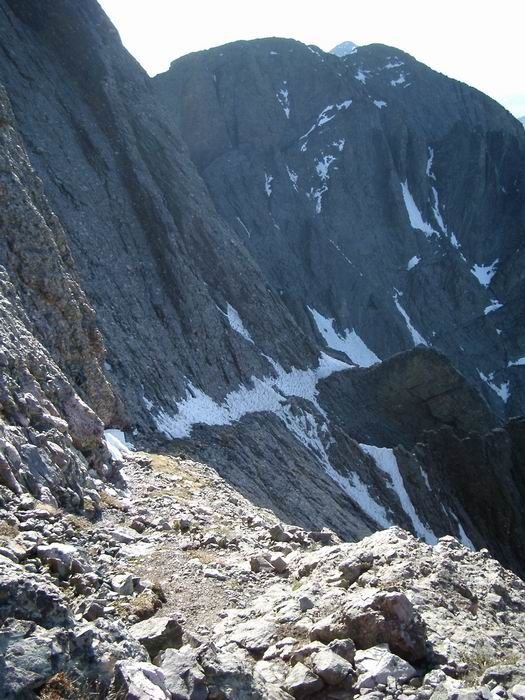 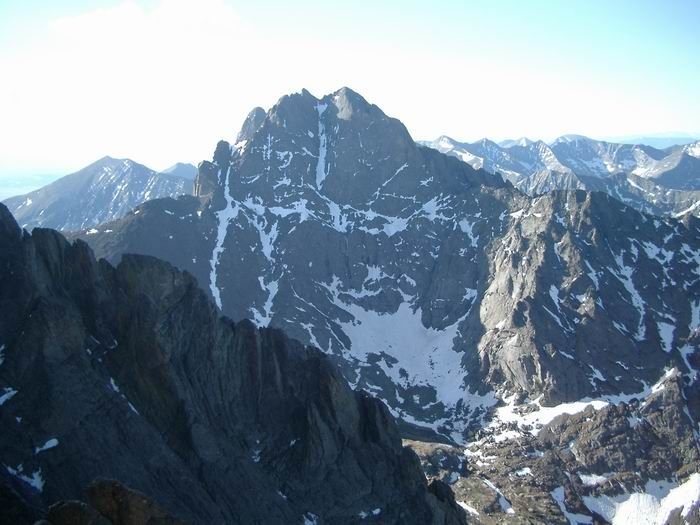 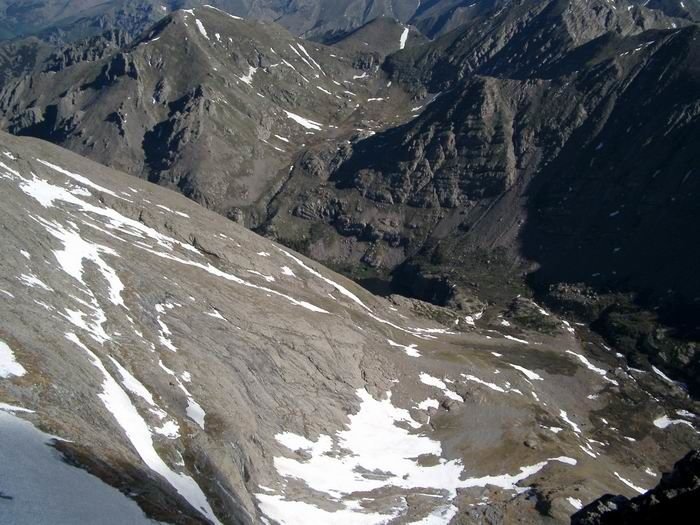 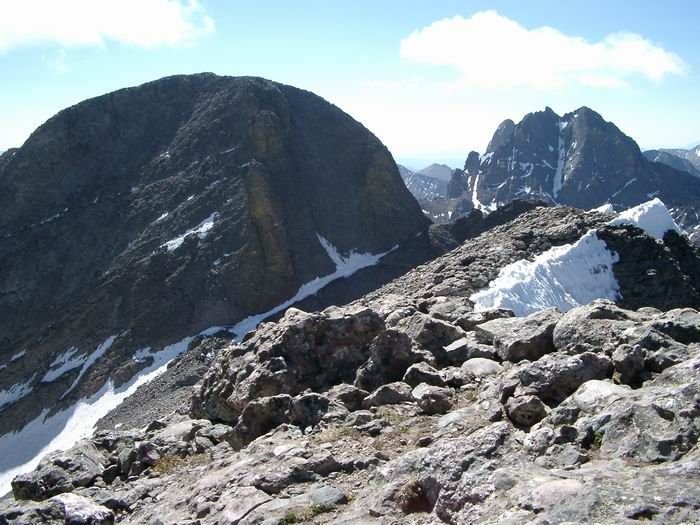 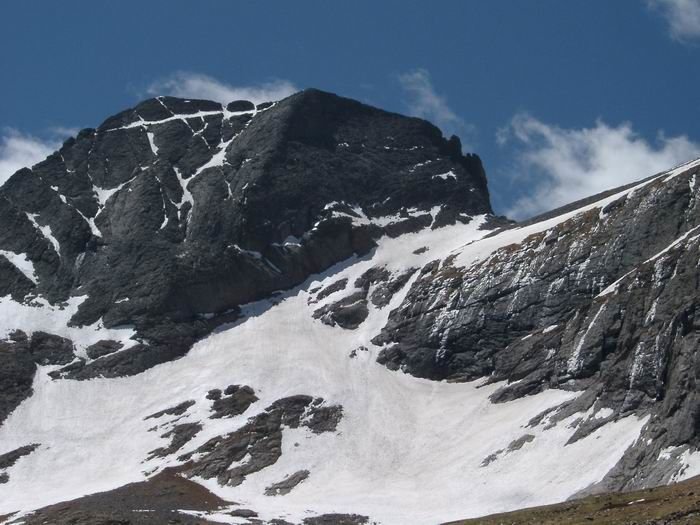 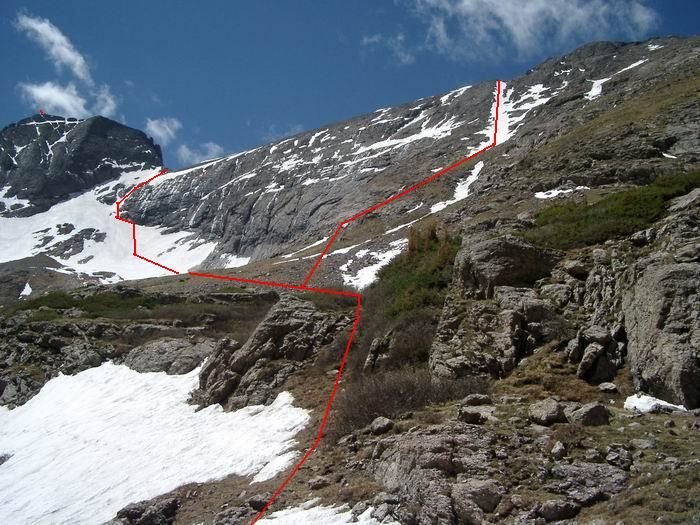 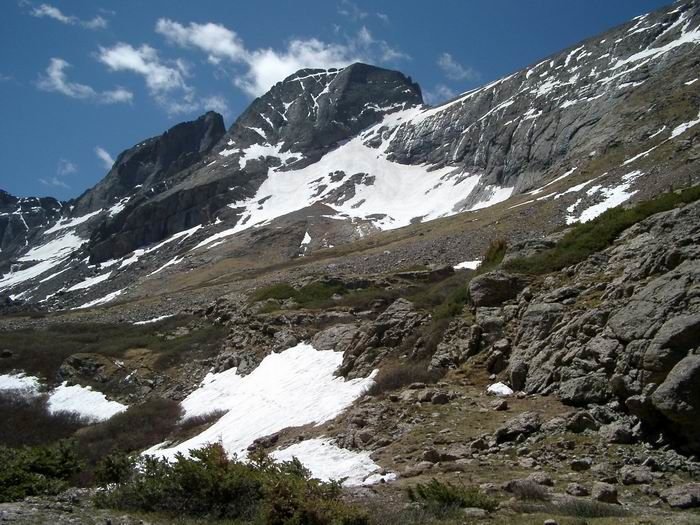 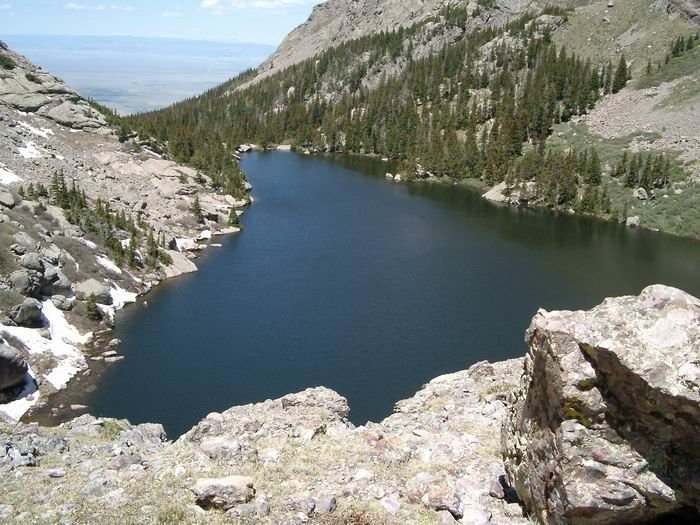