According to the new Light Imaging Detection and Ranging (LIDAR) elevations, Dallas Peak is actually 13,812'.  However, the data on my website is from the older map elevations and I am not that motivated to go through and update the elevations.

After hiking the Colorado 14ers (53 Peaks), many people continue to climb the 100 highest summits in Colorado referred to as the Centennial Peaks.  There are 47 additional high 13ers between 13,800' and 13,999' that you have to hike to reach 100.  I casually hiked 16 of them from 2004 to 2018, but actually had eight interim years where I didn't summit a Centennial Peak between my first and last peak.  I didn't make it a goal to hike them all until 2019 when I found out my climbing partners were going to finish them.  My first Centennial Peak was Red Mountain on September 23, 2004, and my final Centennial Peak was Dallas Peak 18 years later on September 24, 2022.

Brian, Kevin, and I have been climbing partners since 2005.  The three us climbed the 14ers fairly quickly in the mid 2000s.  After completing that list, our focus turned towards more technical climbing including easy alpine multi-pitch rock climbing and lots of moderate ice climbing.  We still did several hikes and occasional peak-bagging, but peak lists were't a priority.

After realizing the Centennial Peaks were in reach, we decided it would be great idea to finish the Centennial Peaks together this summer.  I was sitting on 99 peaks since the Fall of 2021, Brian needed to hike three peaks this summer, and Kevin had to put in a little work this year to get down to one left.  After Brian hiked Rio Grande Pyramid and Vermillion Peak and Kevin knocked off Jupiter Peak and Jagged Peak, the stage was set.  We watched the weather and saw a pretty clear weekend coming up so we drove to Telluride, Colorado, on Friday and hiked to 11,400' south of Dallas Peak.

We set up our backpacking camp next to a good water source and went to bed fairly early.  The forecast was calling for a blue bird day and we only had about 3,000' to climb with day packs the following day so we slept in until around 7:30 am.  Before long, we were slogging up the south slopes watching the upper south face loom larger as we got closer.  We stopped for a quick break beneath the first shorter cliff band where we stashed our trekking poles and the climbing and route-finding began.

The first section involved some class 3 climbing through a weakness on the far left side of the first cliff band and then did an ascending traverse back northeast through steep and loose rubble.  We worked our way to a large cairn on a shallow saddle southeast of the summit and then turned north on use trails.  Route-finding became a bit more challenging when you get to the east side of the mountain, but we finally scrambled our way up to the first short class 4 pitch.  There is a bit more scree hiking at this point and then we finally saw the rappel anchor from the summit, so we knew we were getting close.

We identified the second short class 4 pitch that we all thought was a bit awkward; however, none of us had rock climbed that often lately so I guess everything is relative.  From the top of the second class 4 pitch, you actually cross over to the north face of the peak and we ended up slowing down here due to snow and ice on the ledges that was not very confidence inspiring.  Traversing over to the base of the summit pitch was a bit sketchy, but we eventually did make it to the ledge and set up an anchor.

Kevin led the first section of the summit pitch and brought Brian and I up to a large loose ledge to the right of the climbing line.  From here, I worked back to the route and finished the climb to just below the actual summit.  Brian and Kevin quickly joined me and the three of us took the final steps together to the top of our final Colorado Centennial Peak.  Not bad for three old alpinists!  The weather was perfect and the sun felt great after being in the shade on the north face for around 30 minutes.

We celebrated with a group hug and a Manhattan cocktail that Kevin carried to the summit.  We enjoyed our time in the sun and were pleased with our accomplishment and finishing the high 100.  After several photos and snacks, we made the rappel through the large chockstone, scrambled down to the first class 4 pitch, did another rappel, and then quickly found ourselves back at the large cairn we passed on the way up.

The descent through the loose talus and lower class 3 section went quickly and we were back at our trekking poles before we knew it.  The slog back down to the trail was uneventful and we finally made it back to base camp.  We made water, packed up camp, and had a few miles to hike out.  We stayed at a hostel near Sawpit, Colorado.  After getting cleaned up, we went into Telluride, Colorado, for a meal and a few beers.  We got back to our hostel after celebrating in town and then sat in the hot tub for a bit before going to sleep. Our first good view of Dallas Peak on the backpack in Friday afternoon. The weather was good and the colors were changing. The south slopes and south face of Dallas Peak. Looking back down the south slopes. Looking up at the towering south face of Dallas Peak. Kevin scrambling to the cairn below the large cliff bands. Working our way towards the east face of Dallas Peak. Kevin and Brian taking a break before working up the east side. Brian scouting the route.  Dallas Peak is the center tower. Kevin and Brian scrambling up to the more technical climbing on the peak. The snowy traverse to the base of the summit pitch on the north face. Kevin working his way over to the summit pitch on the sketchy traverse. Kevin getting ready to fire up on the sharp end of the rope. 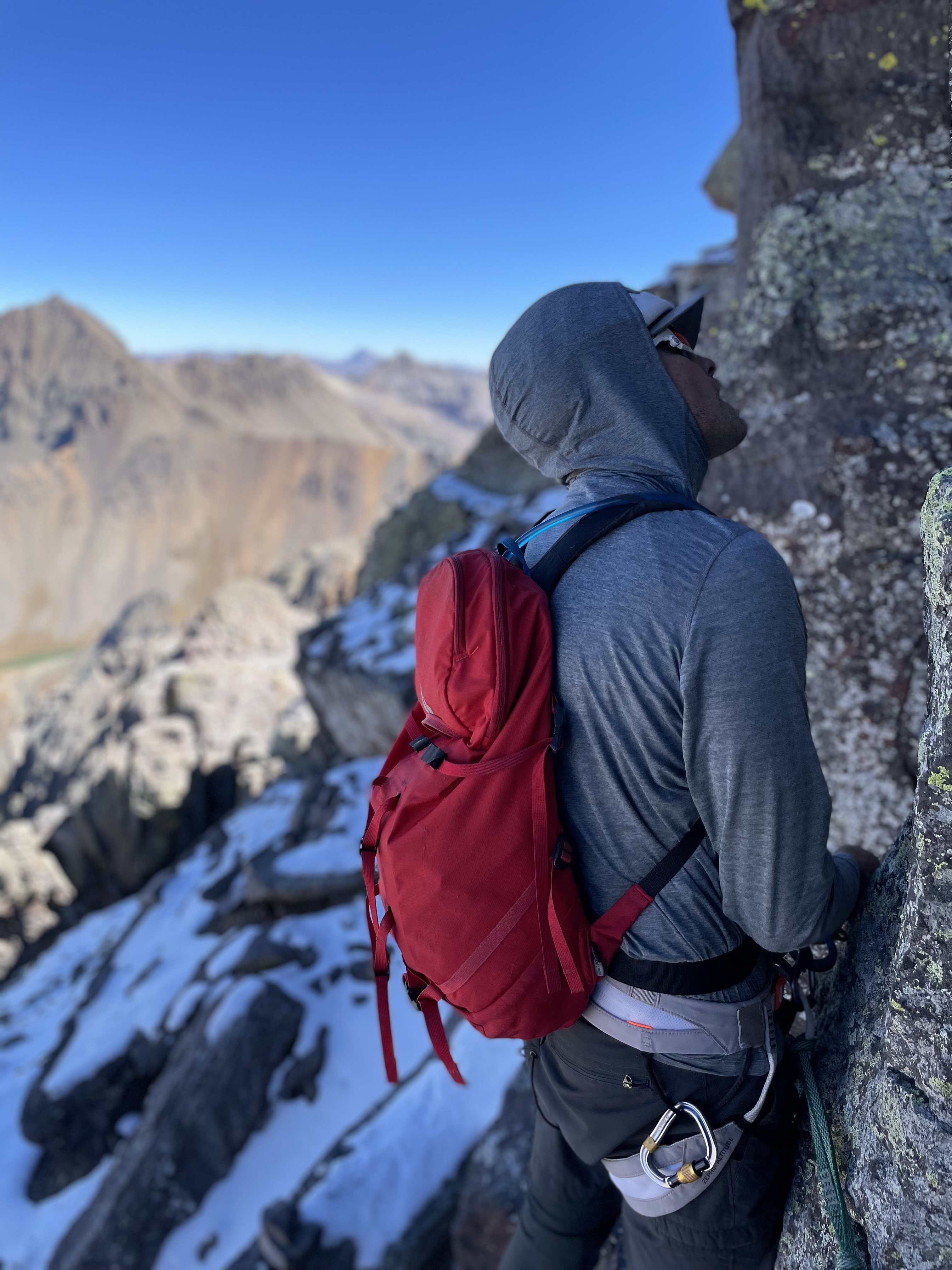 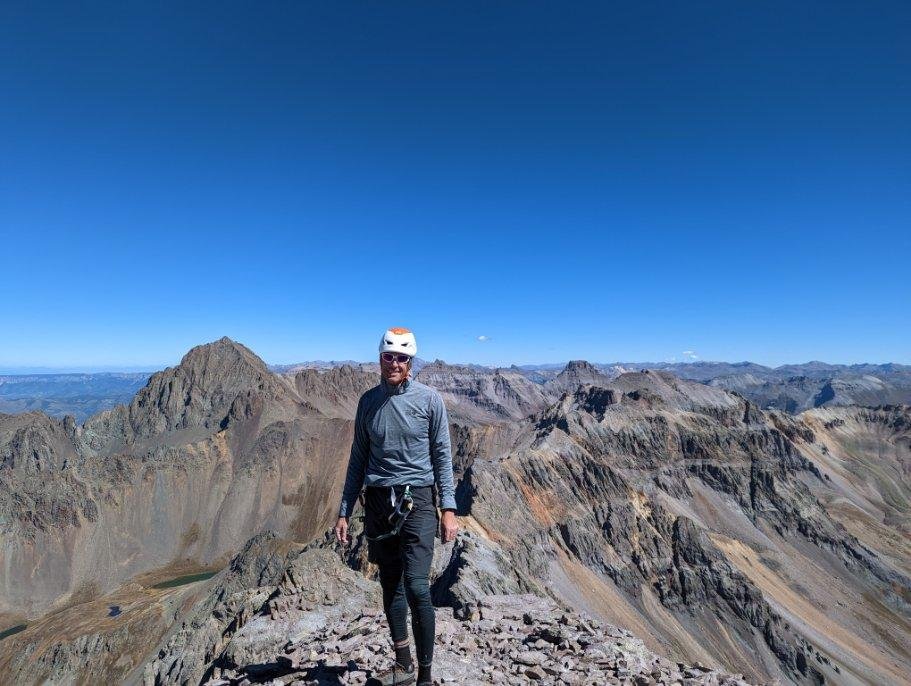 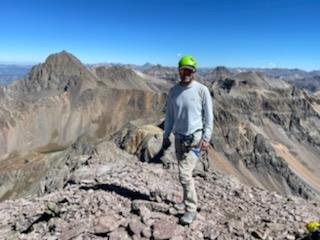 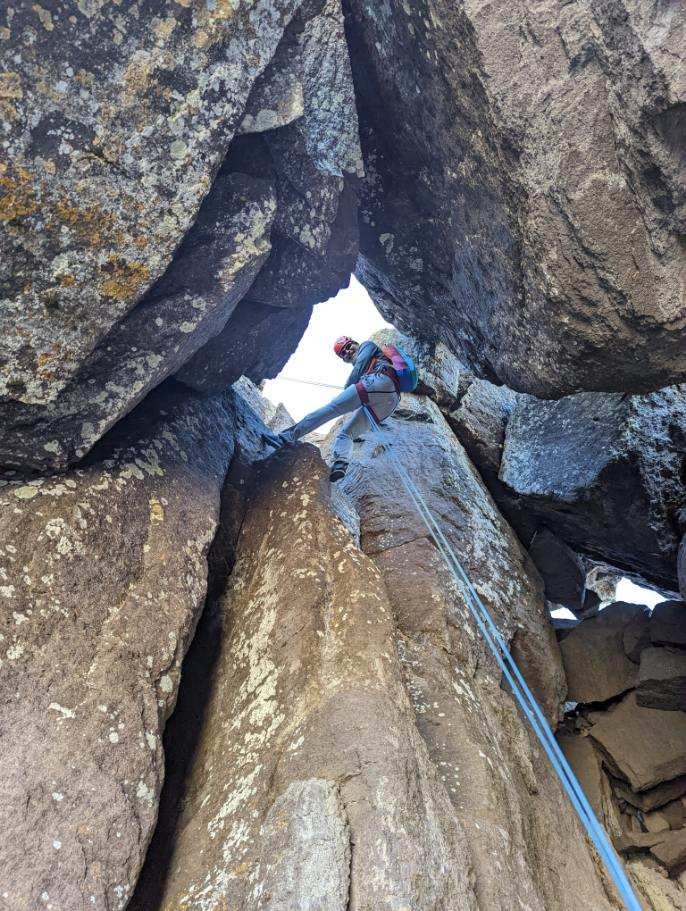 Brian and Kevin at the base of the first rappel below the chockstone. Brian leading the way back down the mountain. 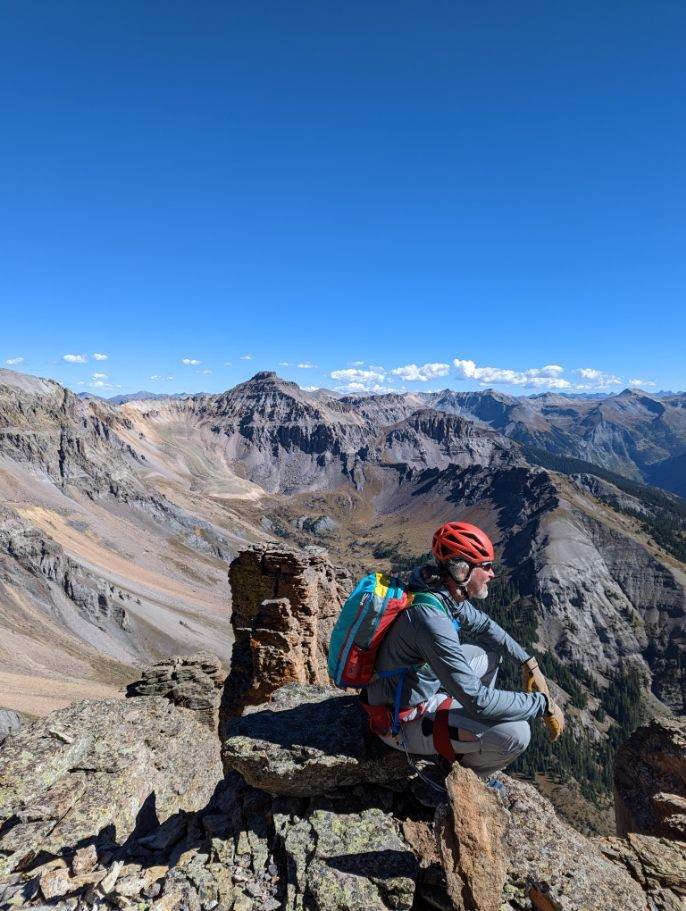 James taking in the views on the descent. One last look at Dallas Peak on the hike out. Leaf peeping on the hike back to the trailhead.