Thunder Pyramid was my 93rd Centennial Peak.  We hiked the west face starting from Maroon Lake.  I left my residence at 4:00 pm on Thursday and made my way to Snowmass Village after stopping in Gypsum, Colorado, and having dinner with my daughter.  I know a guy who owns hotels in Aspen, Snowmass, and Glenwood Springs, Colorado, so he let Tony and I stay there for free.  Tony had to drive from Durango, Colorado, and I was already sleeping when he arrived around 10:30 pm.

We got up at 3:45 am and drove from Snowmass Village to the Maroon Lake Trailhead.  Both of us had made reservations online and were able to park in the day use area.  We started hiking up the trail at 4:50 am.  We maintained a fairly slow pace throughout the day and just wanted to stay safe given Thunder Pyramid's reputation for being loose and moderately dangerous.

We crossed West Maroon Creek on a snow bridge about 100 yard south of where the actual trail goes and then bush-whacked back to the well-maintained trail.  We were only on it for a short bit before we turned east, left the trail, and started the climb.  The introduction was over and the work was about to begin.

The initial section of the climb starts with a short traverse on rocks, then scrambling up three rock gullies and one grass gully.  At the top of the grassy section, we traversed north, crossed a creek coming out of the drainage between Thunder Pyramid and Len Shoemaker Ridge, and saw the rest of our route.  We picked our way up grassy slopes and rock until the route became a snow climb.

Stupidly, I recommended we leave our crampons and ice axes at the trailhead since it seemed as though it was summer conditions.  This was a poor decision because instead of climbing approximately 1,000' of a moderate snow climb, we ended up scrambling up the ridge to the right of the snow line on loose and crappy rock.  Nevertheless, we finally got to the point where the snow was melted out and the rock rib turned more technical so we worked our way back to the standard route and to the saddle to the south of Thunder Pyramid.

The final scramble to the summit was fun and on the best rock of the day.  The route we took did have a short section of class 4 climbing up a chimney just before the top of the peak.  We were grateful to climb the peak and spent 20 minutes on the summit after arriving at 10:40 am.  The descent was a bit easier than I anticipated, but we did get rained on for about 30 minutes while hiking out.  After reaching the standard trail on the descent, we finished the last of our water, put on a bit of sunscreen, and stripped down for the hike out.

We got back to the trailhead at 3:10 pm for a 10 hour and 20 minute car-to-car day.  I was spent and tired.  The day was longer than I expected due to route-finding and loose rock, but a couple of beers and some conversation perked me back up.  Tony headed south back home, and I stopped off and had dinner with my daughter again in Gypsum, Colorado, on the way home.  It felt good to hike this peak and tick it off the list. 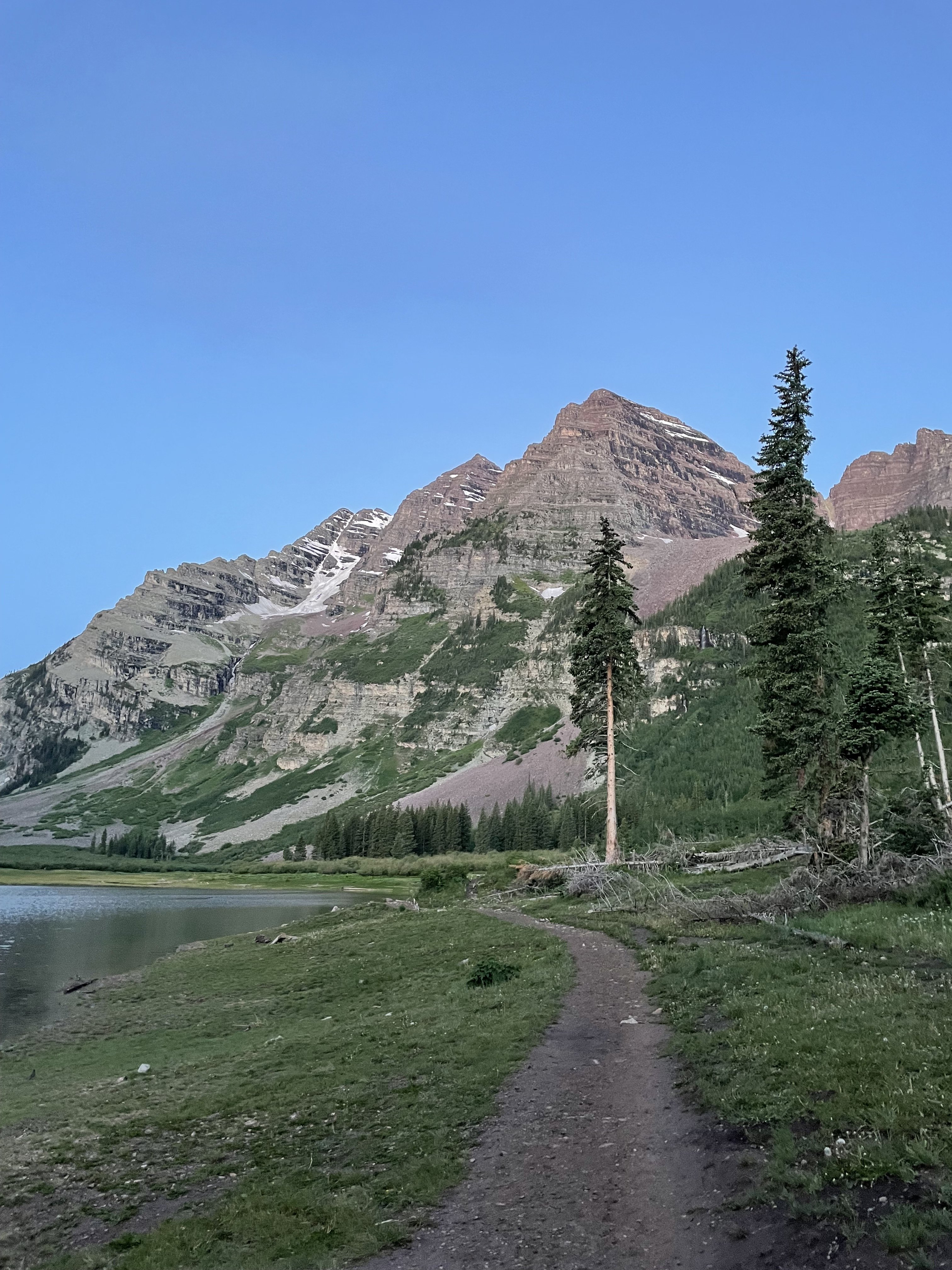 The Maroon Bells from Crater Lake. 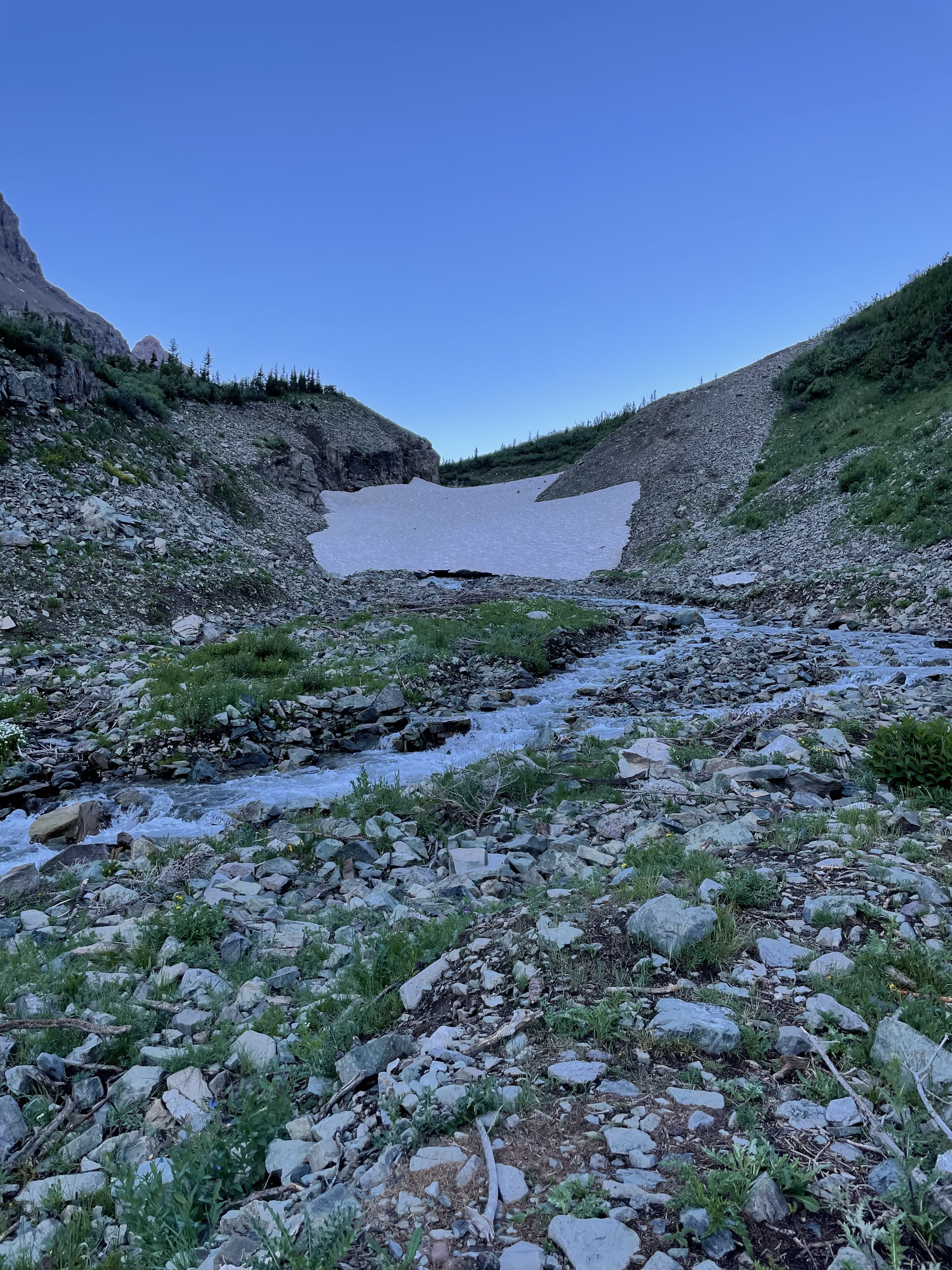 The snow bridge we crossed on the hike in. 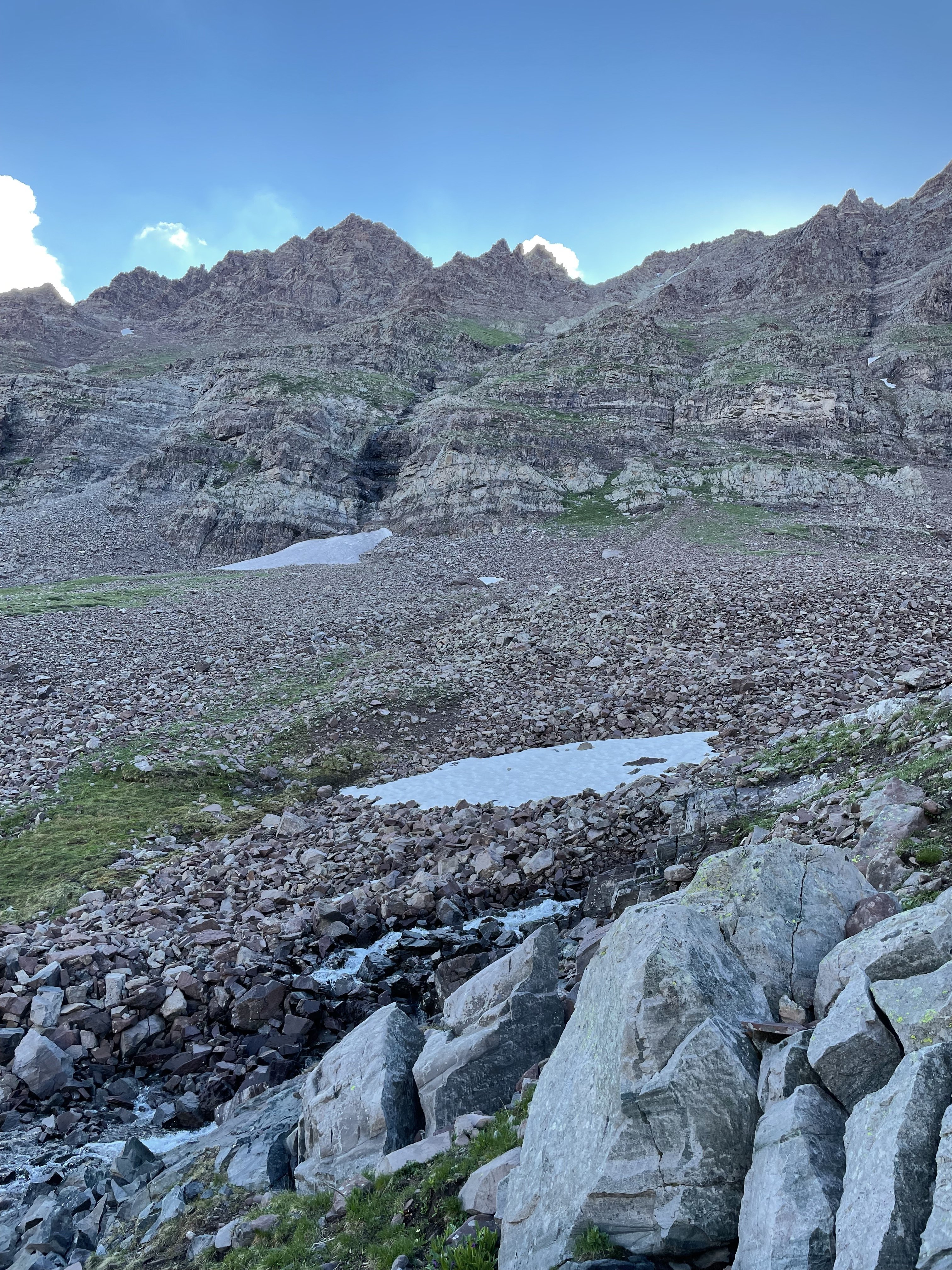 The route after climbing the initial rock and grass gullies. 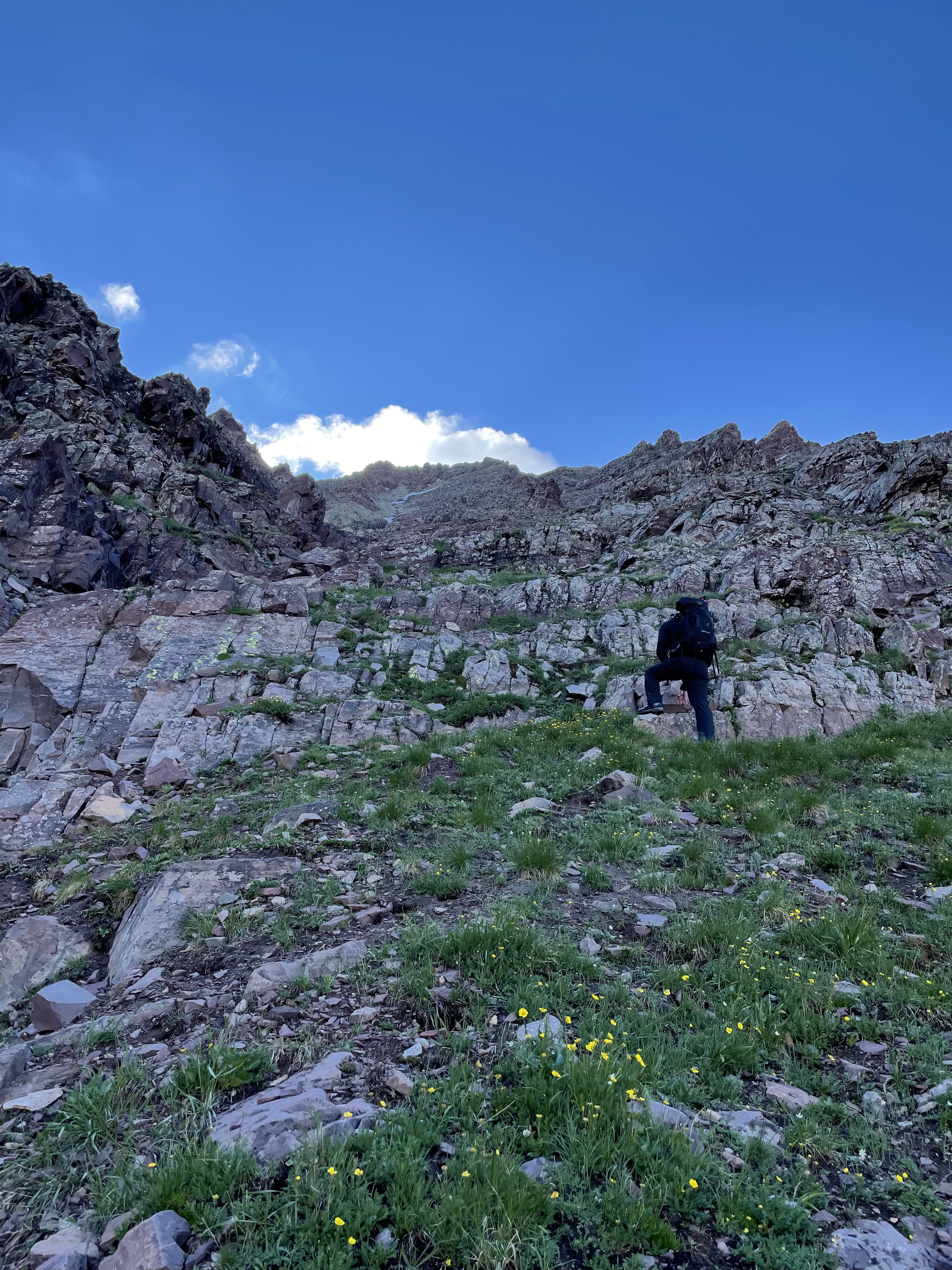 Tony working his way up the west face of Thunder Pyramid. 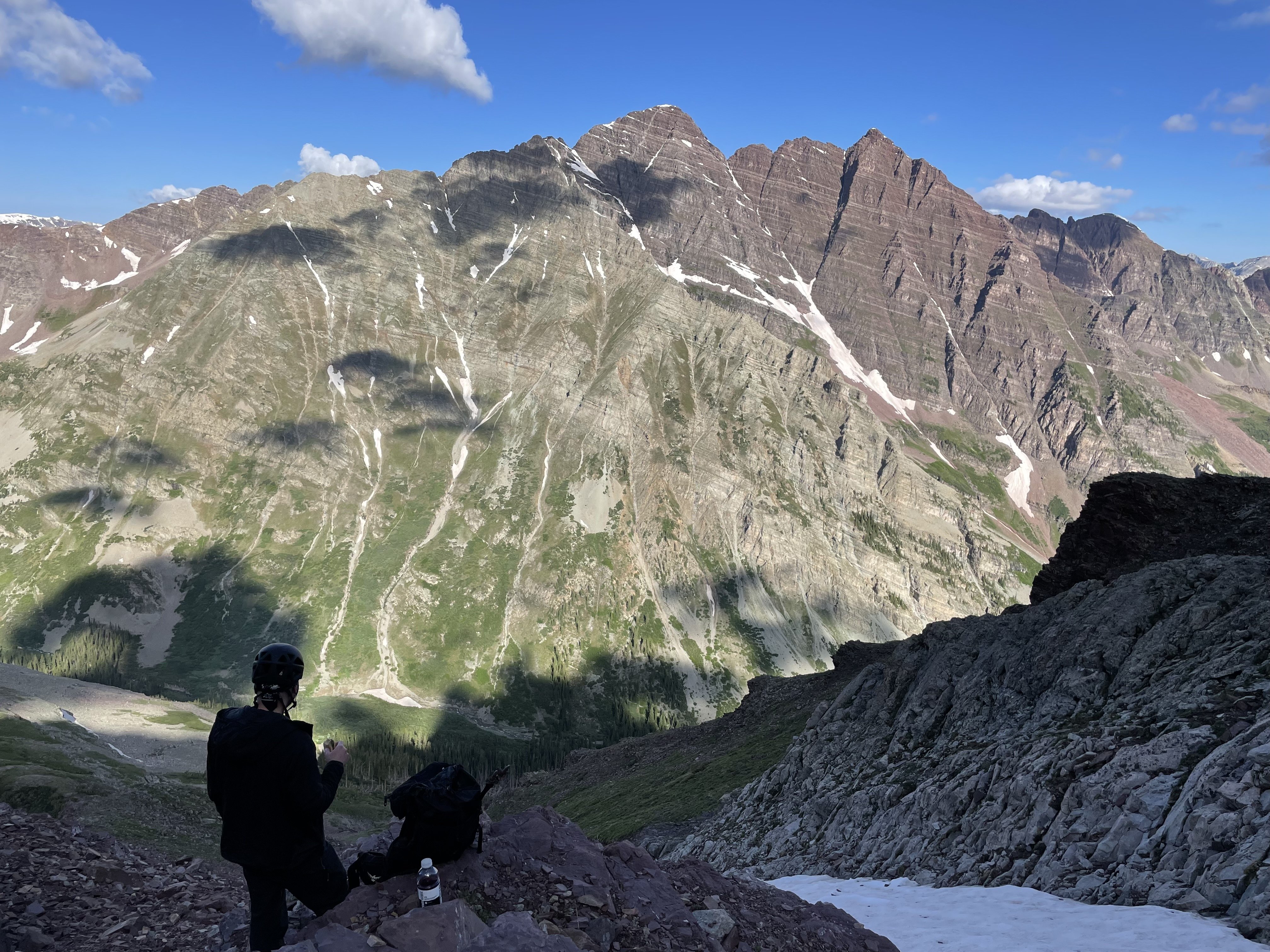 Tony taking in the views of the Maroon Bells. 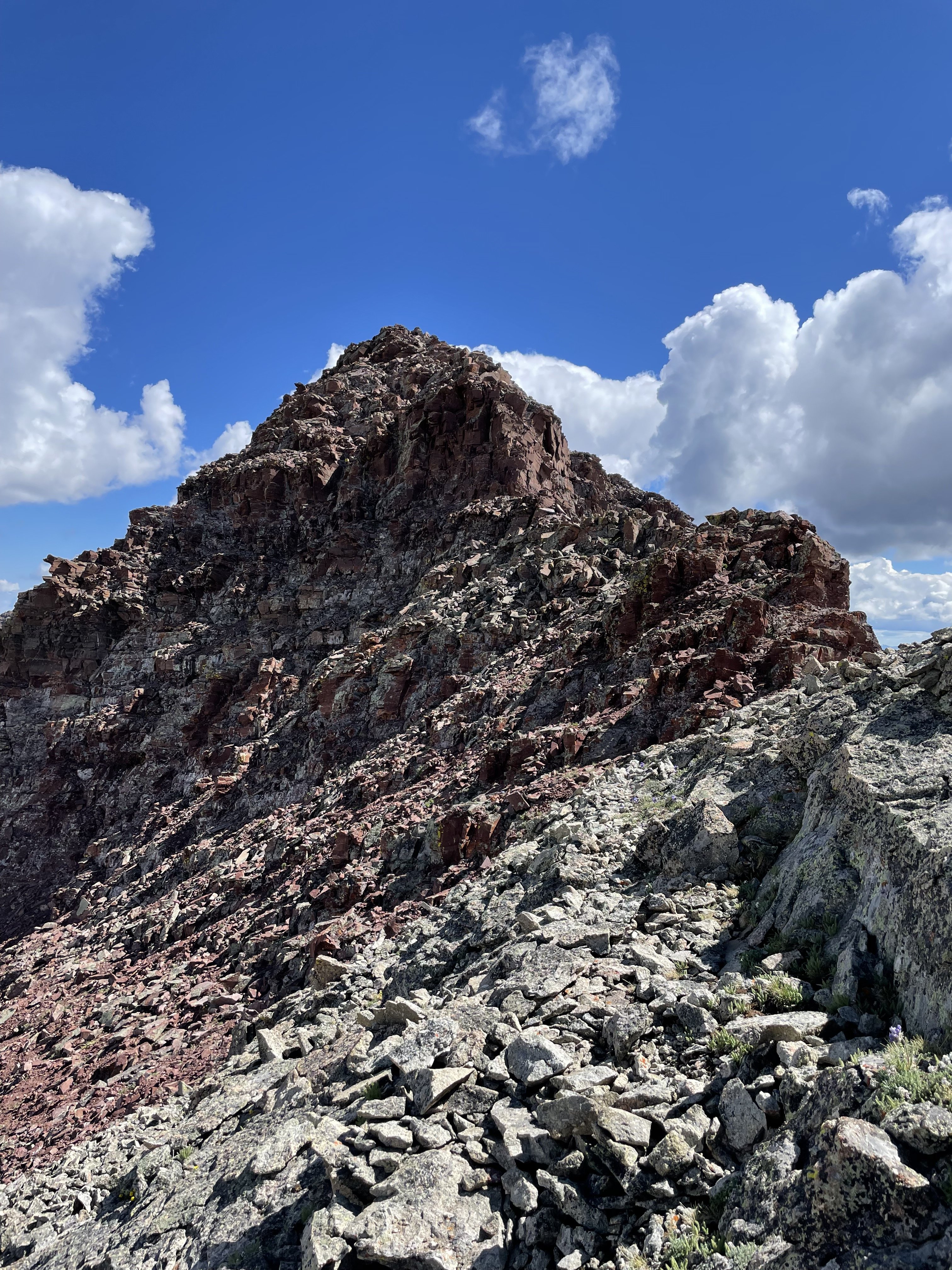 The final ridge to the summit of Thunder Pyramid. 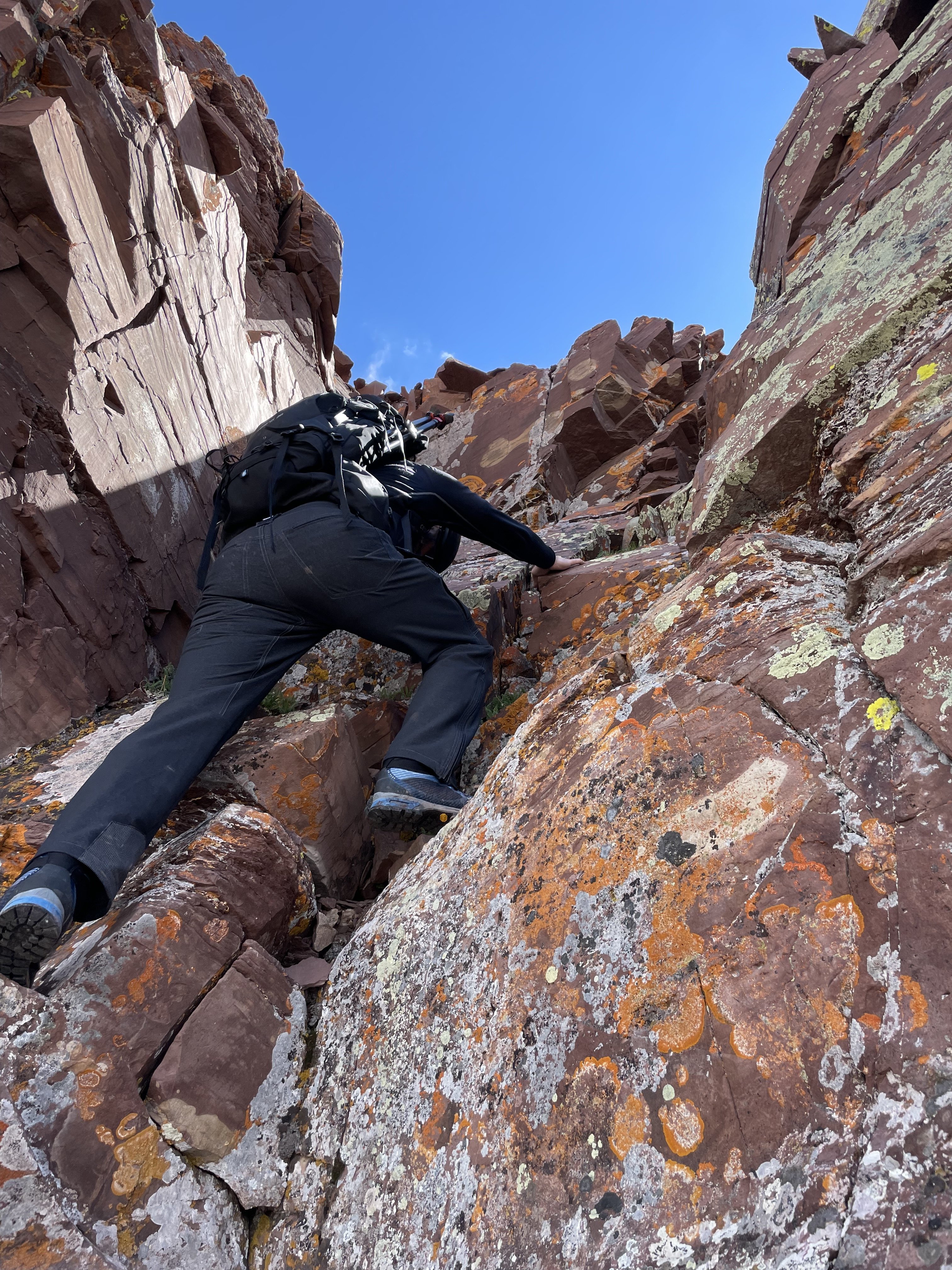 Tony scrambling up the class 4 chimney. 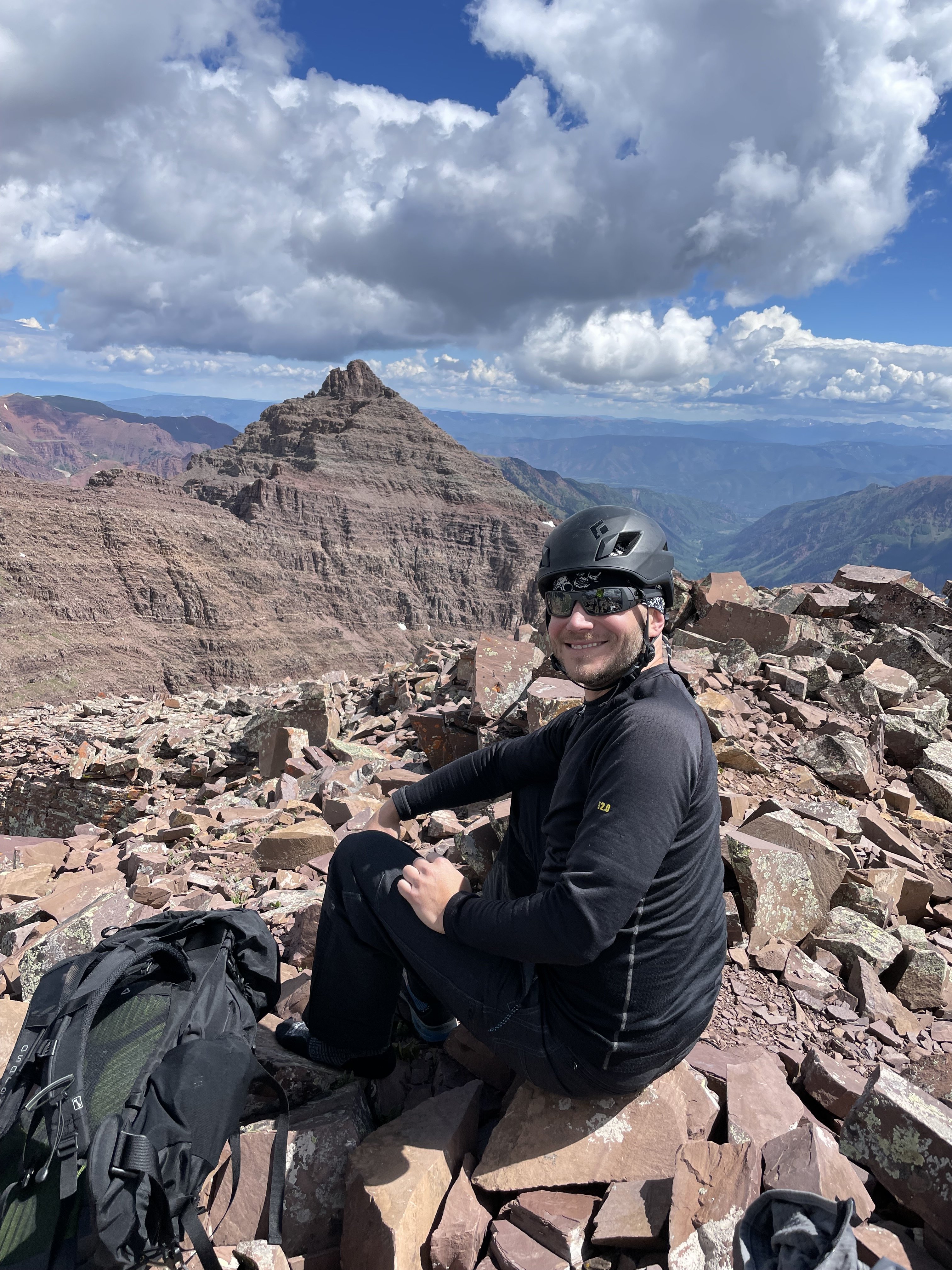 Tony's summit photo with Pyramid Peak in the background. 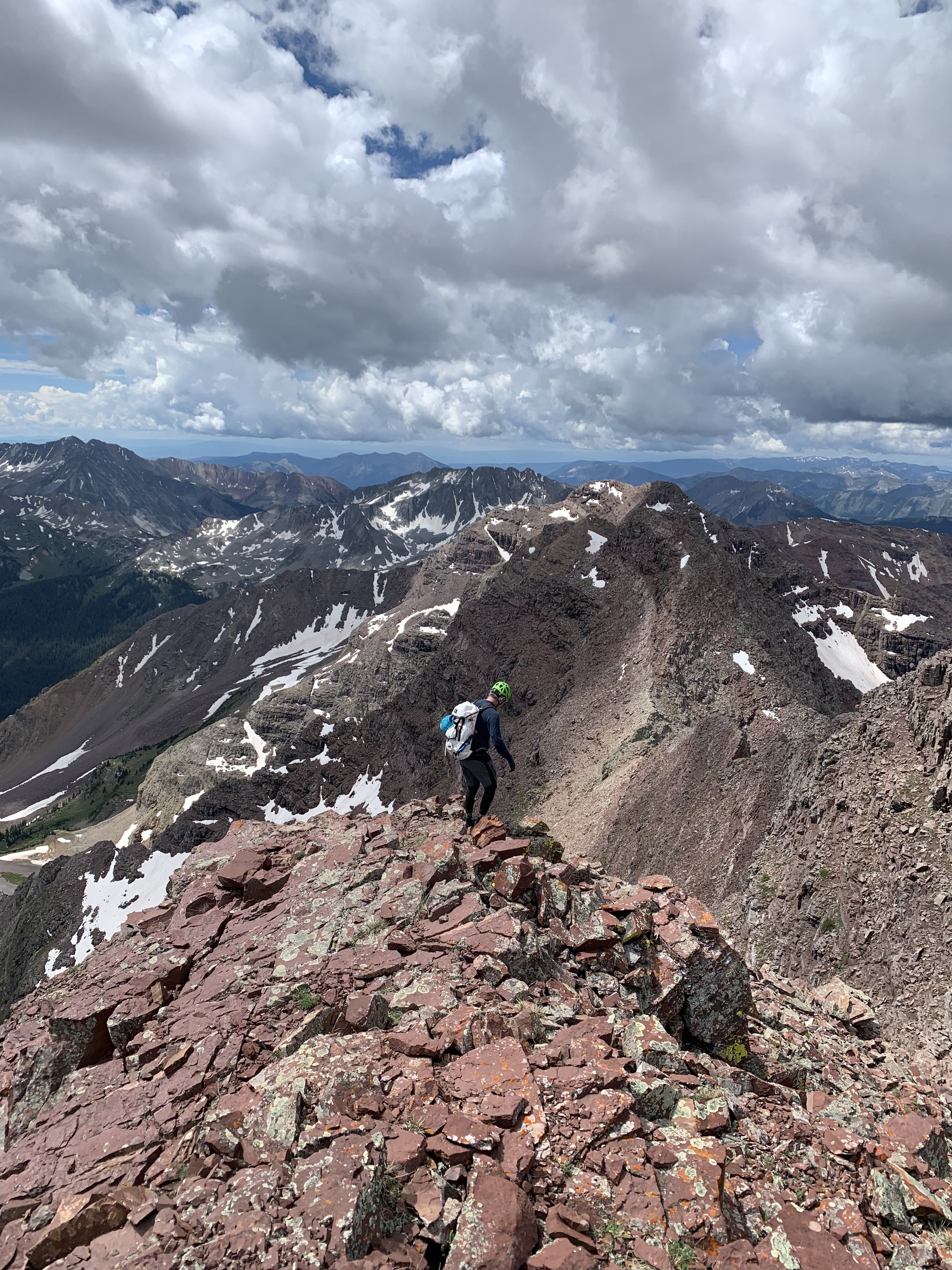 Starting back down the peak on the summit ridge. 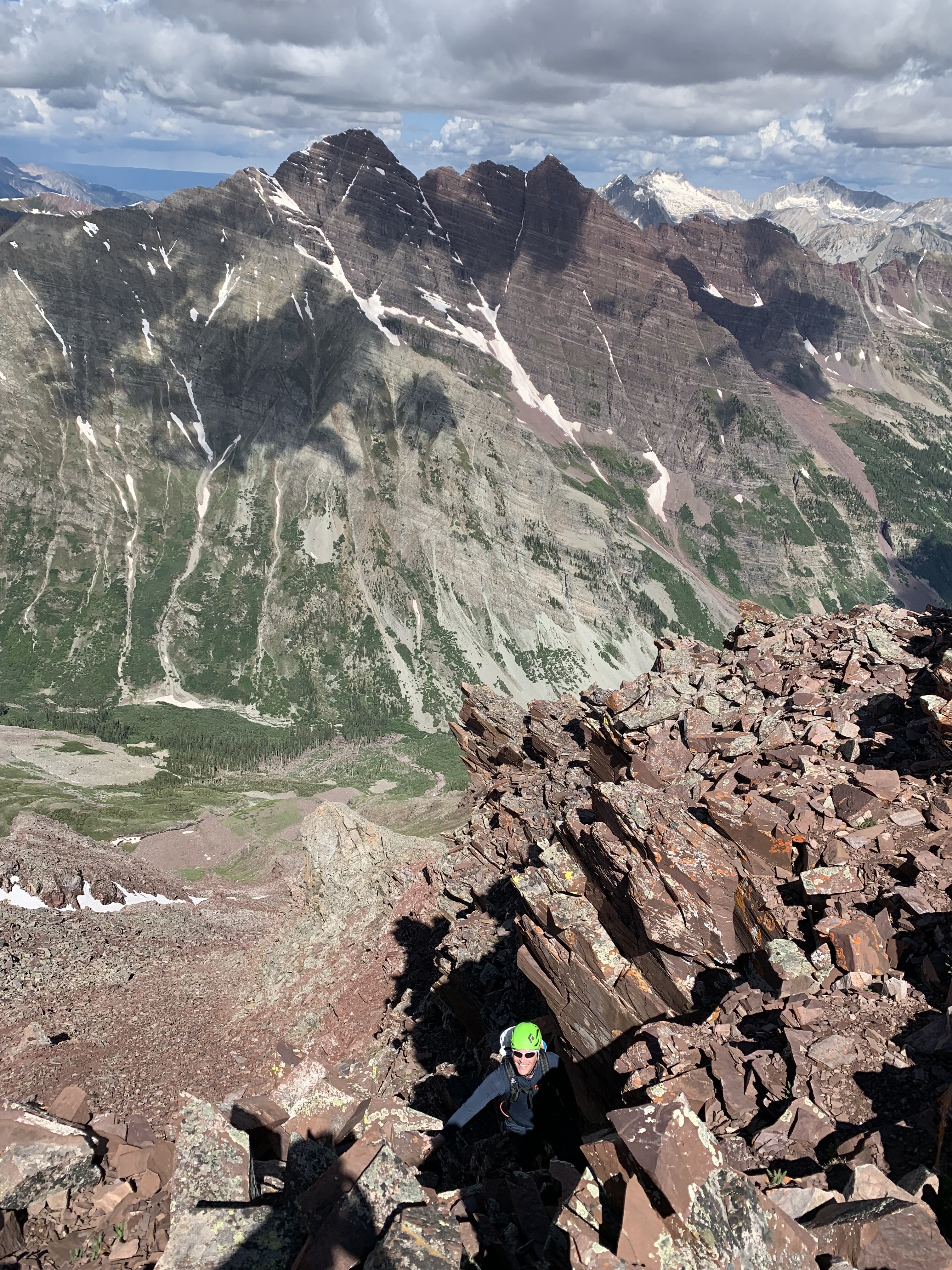 James down-climbing the crux with the Bells in the background. 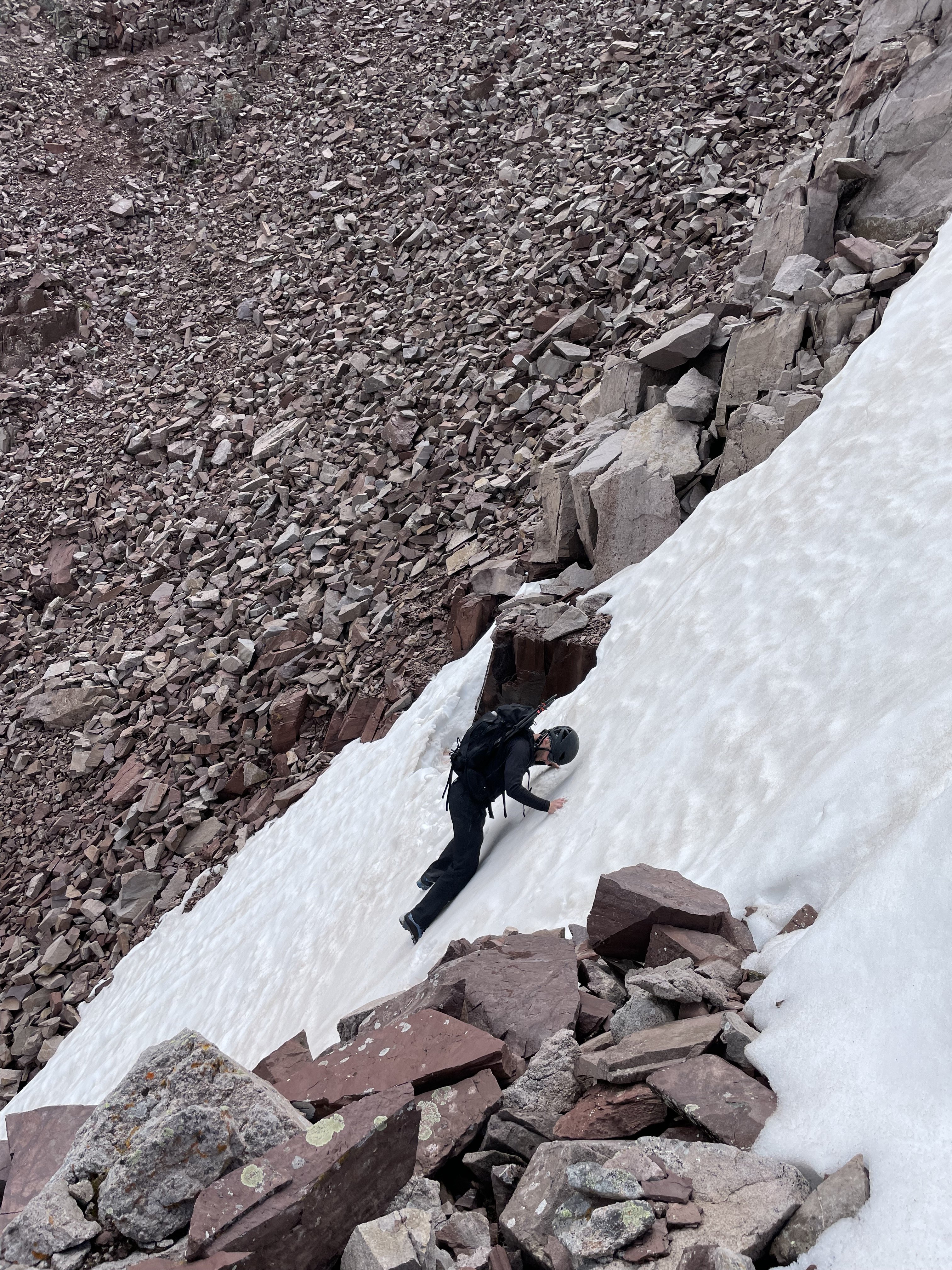 Tony crossing the small finger of snow we had to make our way across. 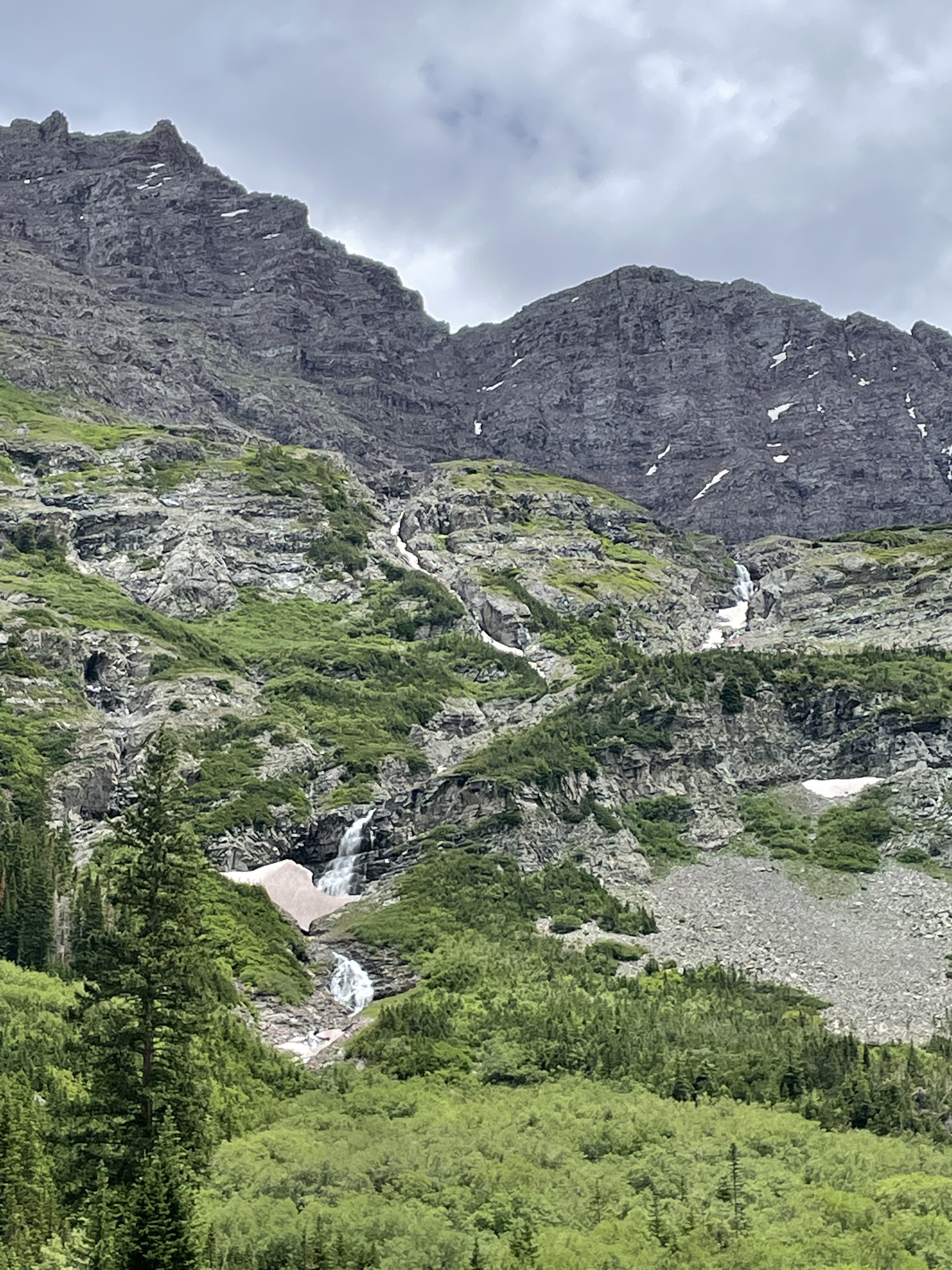 Waterfalls on the hike out. 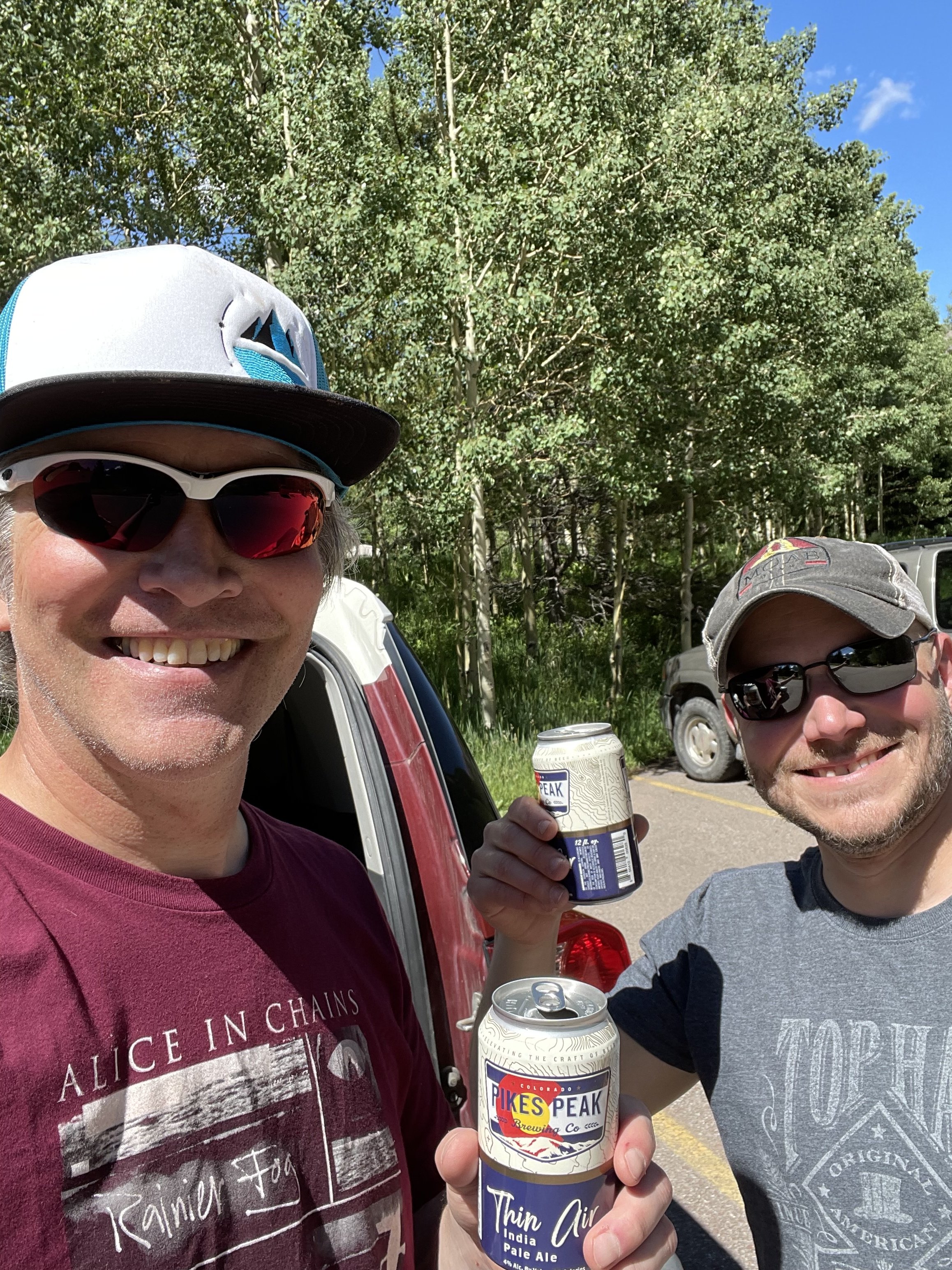