The next five reports are a combination of a week in the San Juan Mountains to climb four Colorado Centennial Peaks including Jupiter Mountain, Jagged Mountain, Pigeon Peak and Turret Peak.  I feel as though the route we took and the itinerary we planned was the most efficient way to summit all four peaks in one trip.  We rode the Durango-Silverton Train from Durango, Colorado, to the Needleton Trailhead.  Brian and I hiked to the upper Chicago Basin and climbed Jupiter Mountain.  We then carried over Twin Thumbs Pass north to Lake 11754.  We day-hiked Jagged Peak from the lake and then carried over Noname-Ruby Pass to the meadows at 11,600' in Ruby Creek.  We day-hiked Pigeon and Turret Peak and then returned to the Needleton Trailhead by going down Ruby Creek.  It was a successful and memorable trip for the both of us.

Jupiter Mountain was my 96th Centennial Peak.  We hiked the southwest slopes starting from the Needleton Trailhead.  Brian and I drove from Denver, Colorado, to Bayfield, Colorado, on Sunday and stayed with a friend before boarding the Durango-Silverton Train at 8:00 am on Monday morning heading for the Needleton Trailhead.  It appeared as though we had a great week of weather ahead of us in order to hike and climb the four Colorado Centennial Peaks in the area.

We started hiking from the trailhead at 10:50 am and made it to camp 1 at 11,200' in the upper Chicago Basin around 2:30 pm.  We set up camp, hydrated, ate, and rested for a bit before deciding that the weather was holding and we should hike Jupiter Mountain this particular evening.   We left camp at 4:15 pm and I made the summit of Jupiter Mountain at 6:30 pm 20 minutes after Brian had arrived.  It was a beautiful evening and it felt good to tick one of the four peaks we wanted to climb off the list early in the trip.

Given the lateness of the day, we didn't stay on the summit long and returned to camp at 8:05 pm with our headlamps on.  I was feeling poorly when I got pack to our tent and immediately laid down to rest as Brian also relaxed.  After 20 or 30 minutes, I threw-up quite a bit but started to feel better afterwards.  We went to bed knowing that we had a fairly modest day ahead of us since we had already made the summit of Jupiter Mountain. 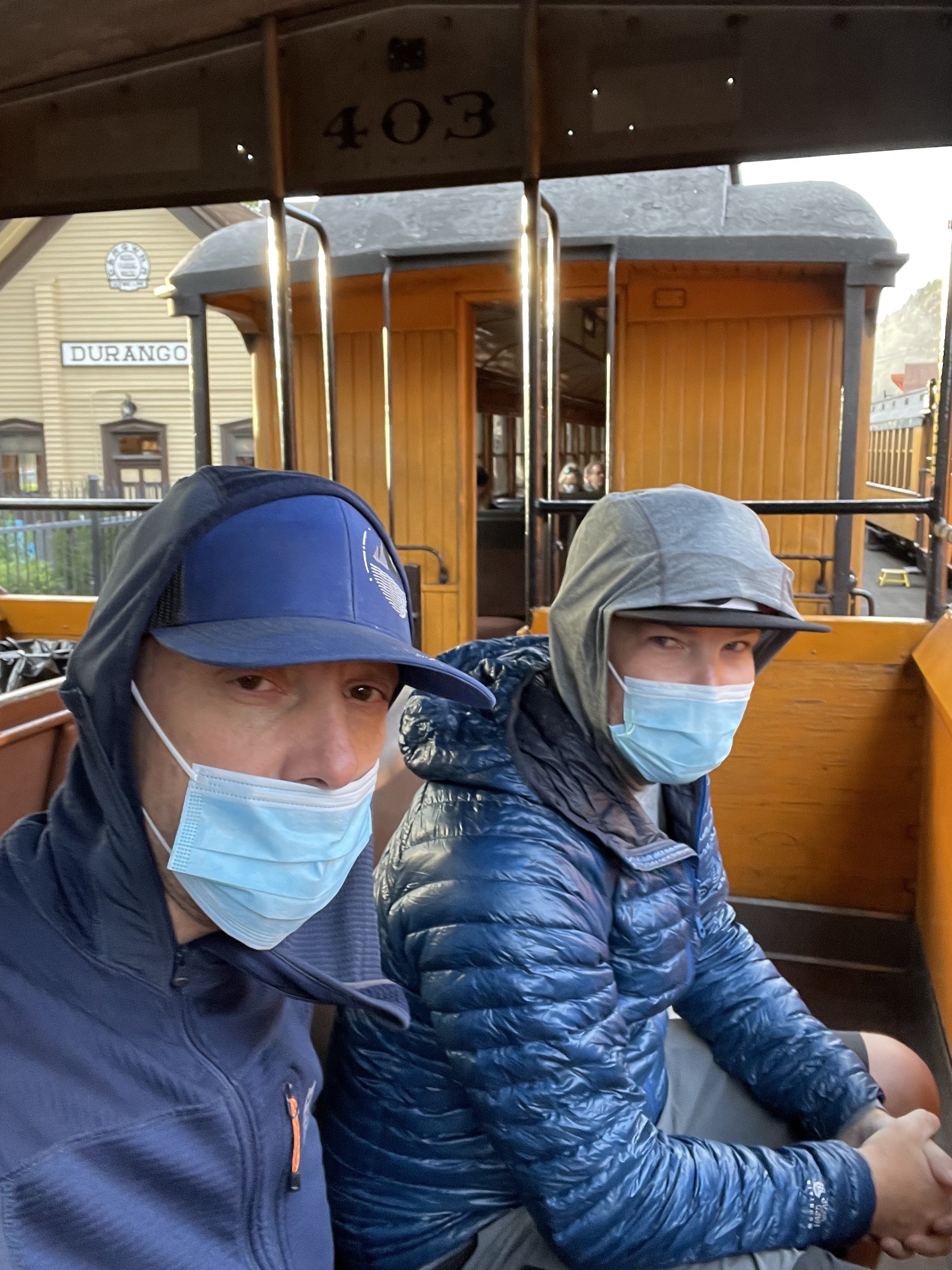 The Durango-Silverton train in Durango, Colorado. 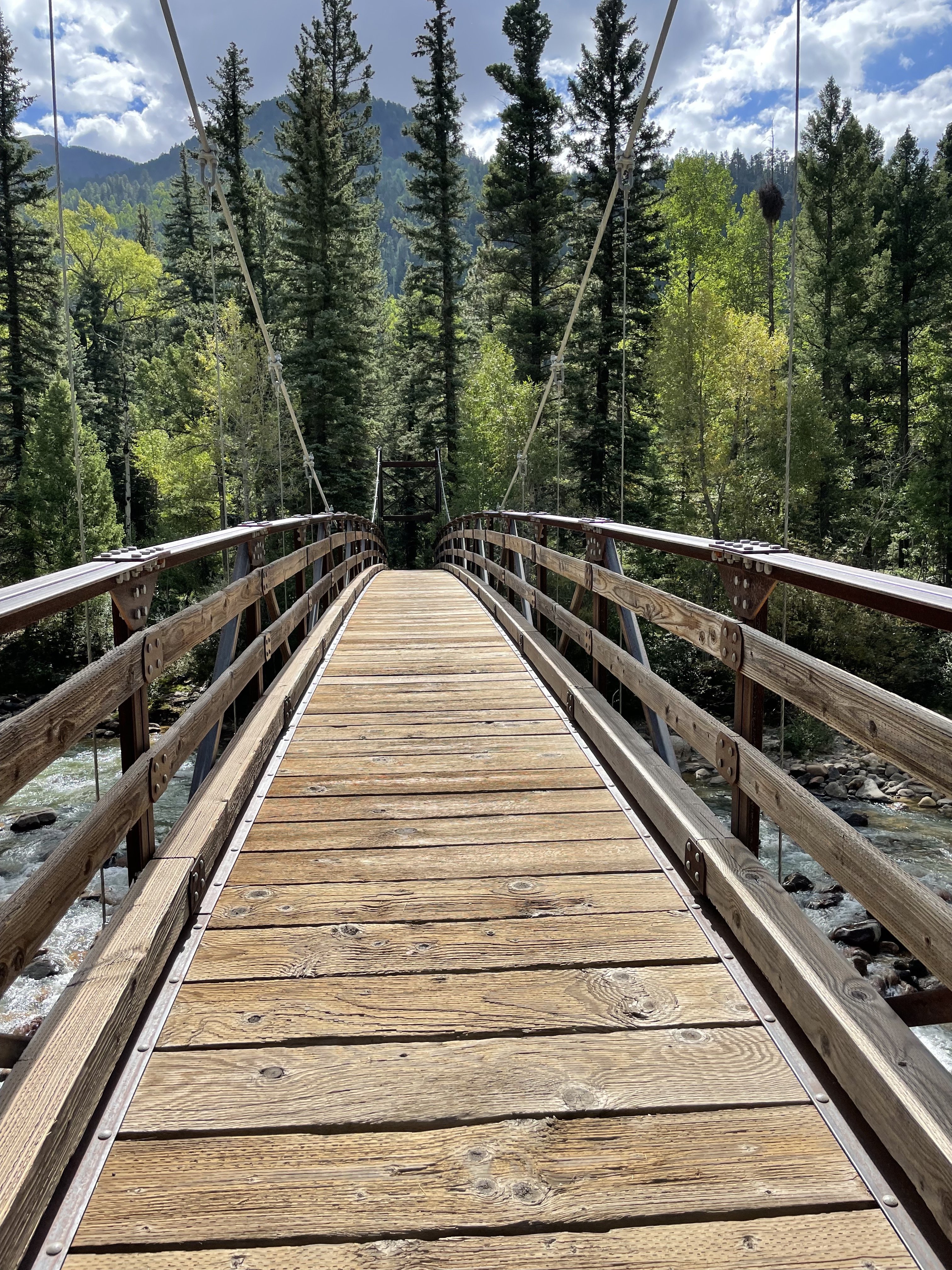 The beginning of our backpacking trip. 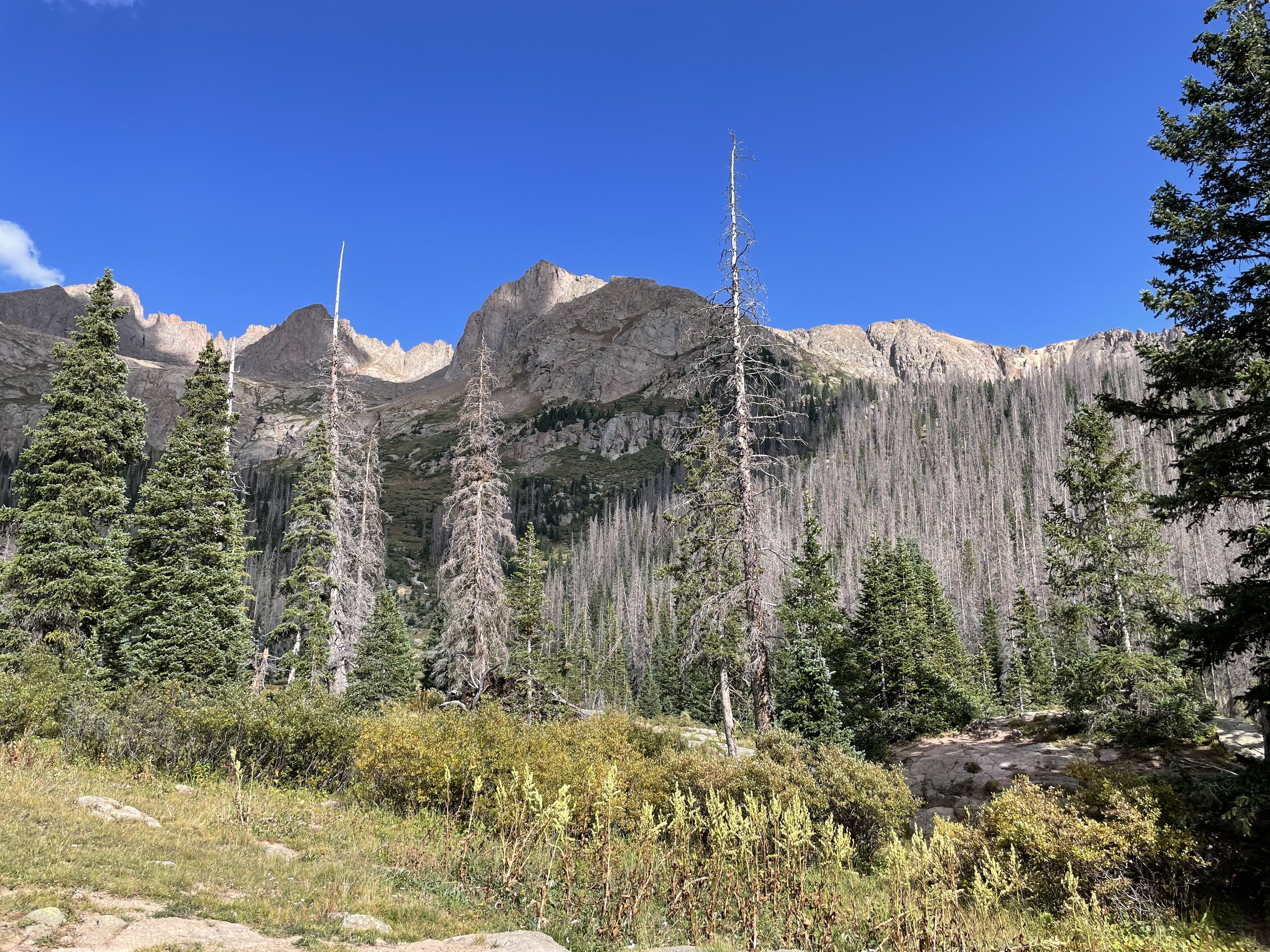 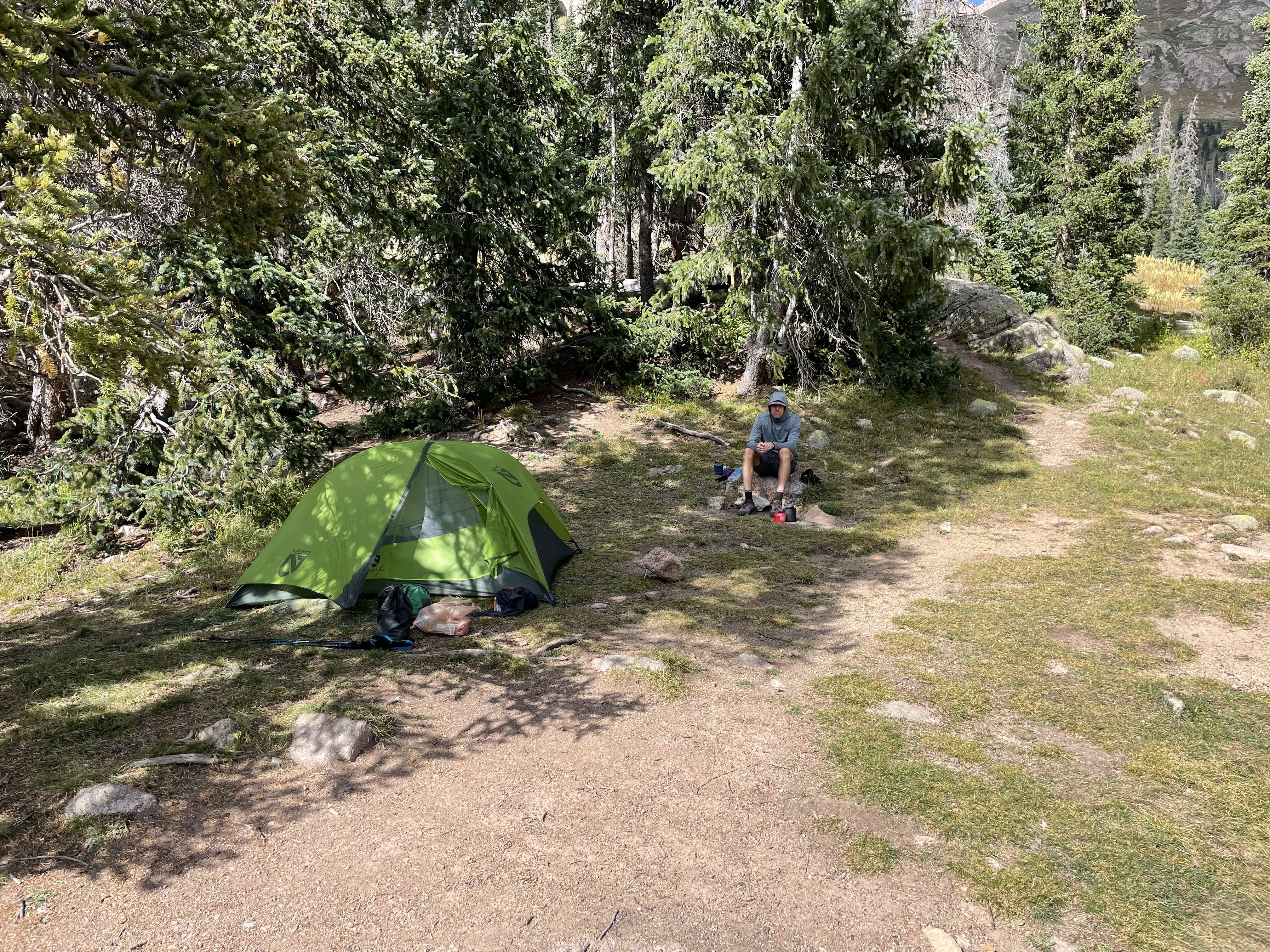 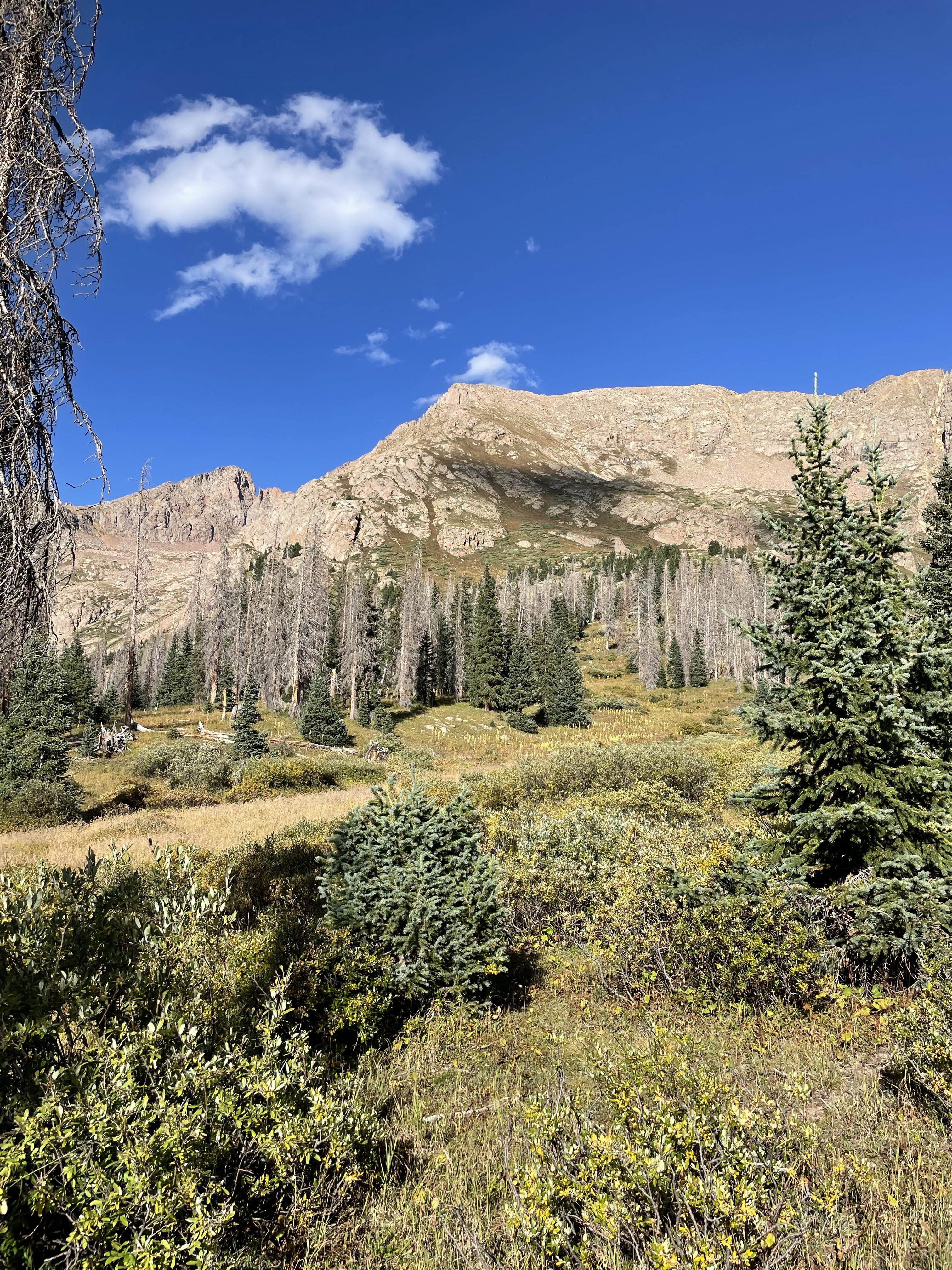 Jupiter Mountain from the southwest. 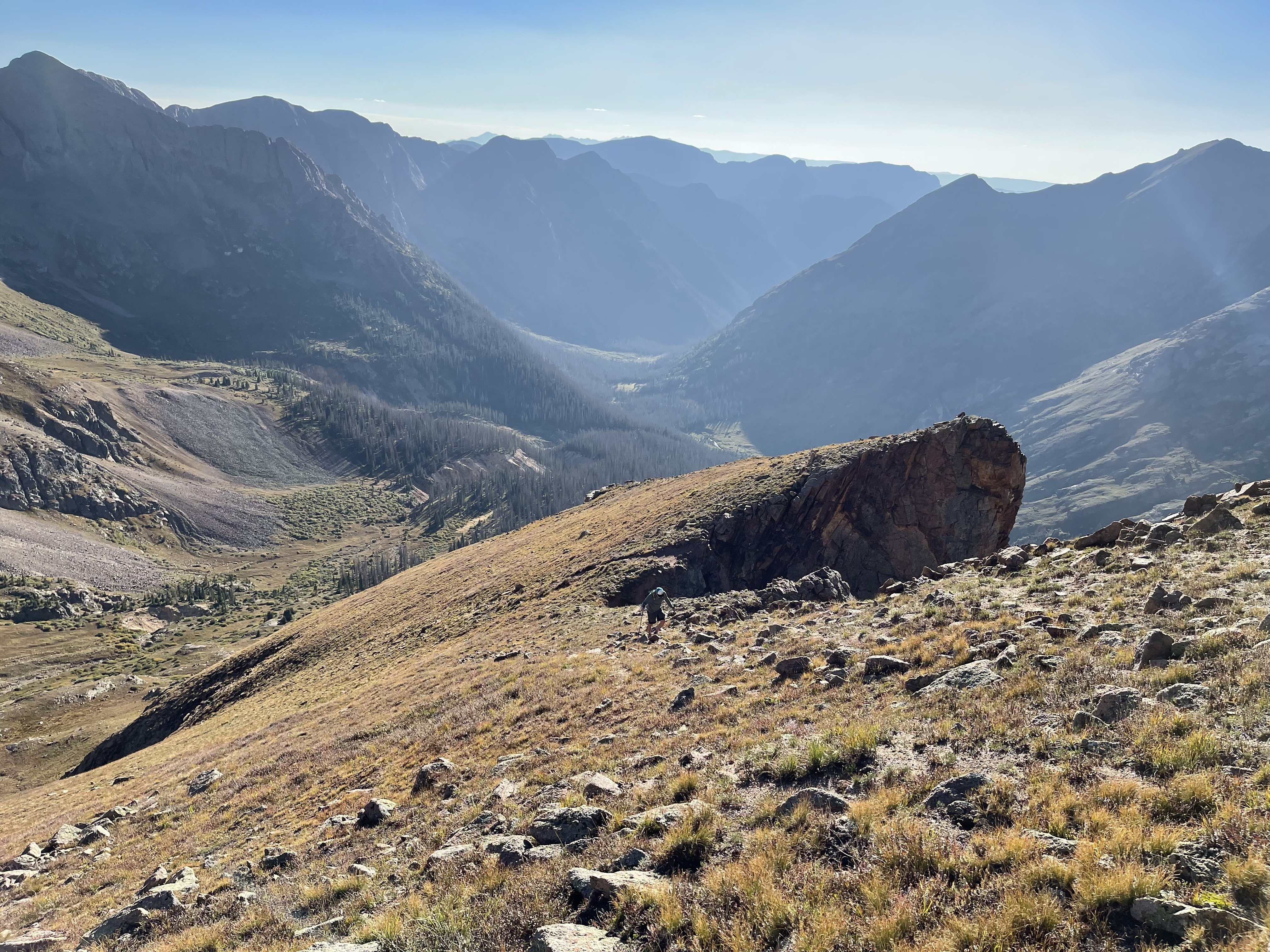 James hiking up the southwest slopes of Jupiter Mountain late in the evening. 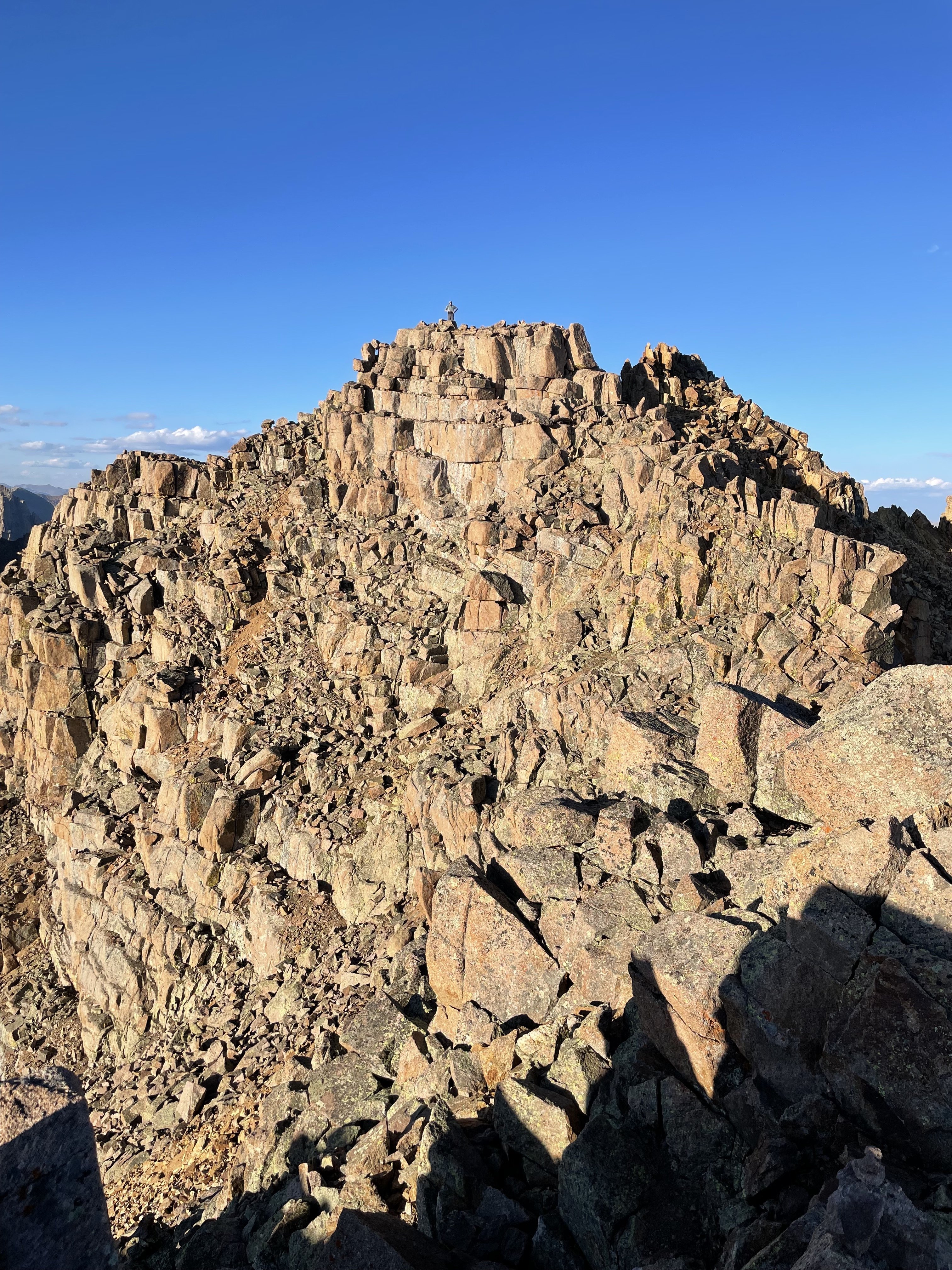 Brian on the summit of Jupiter Mountain. 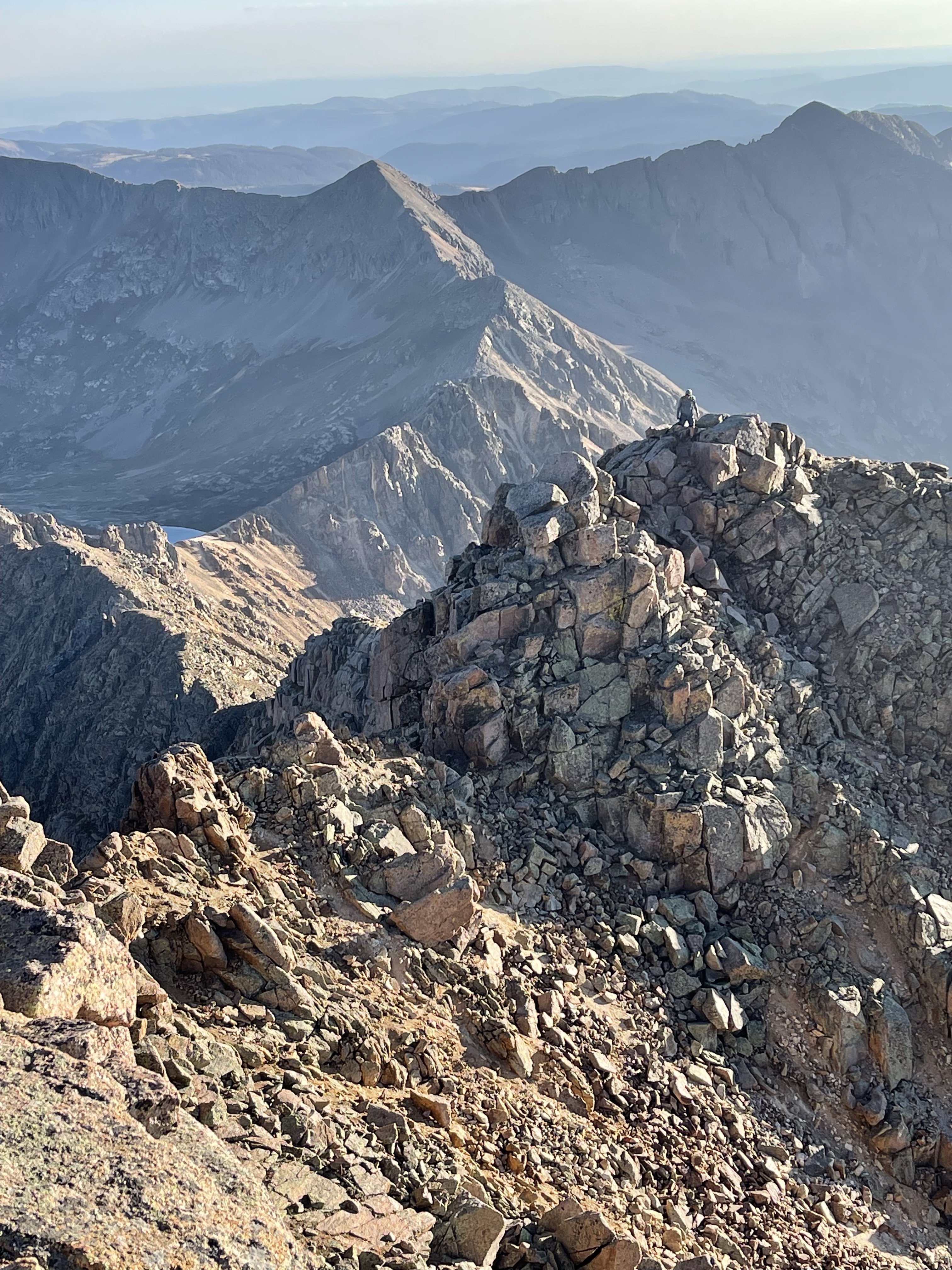 James making his way to the summit of Jupiter Mountain. 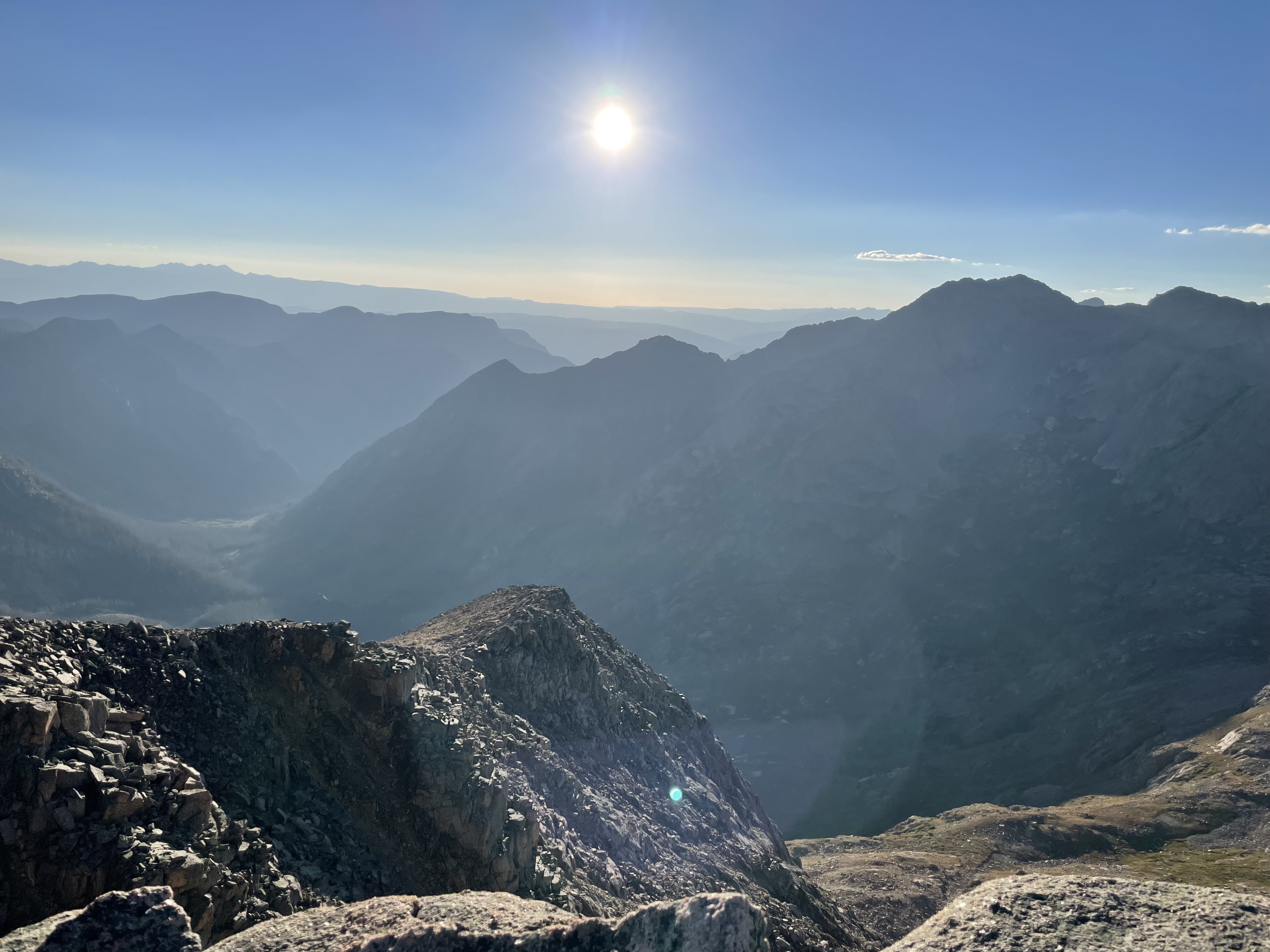 Views to the west from the summit. 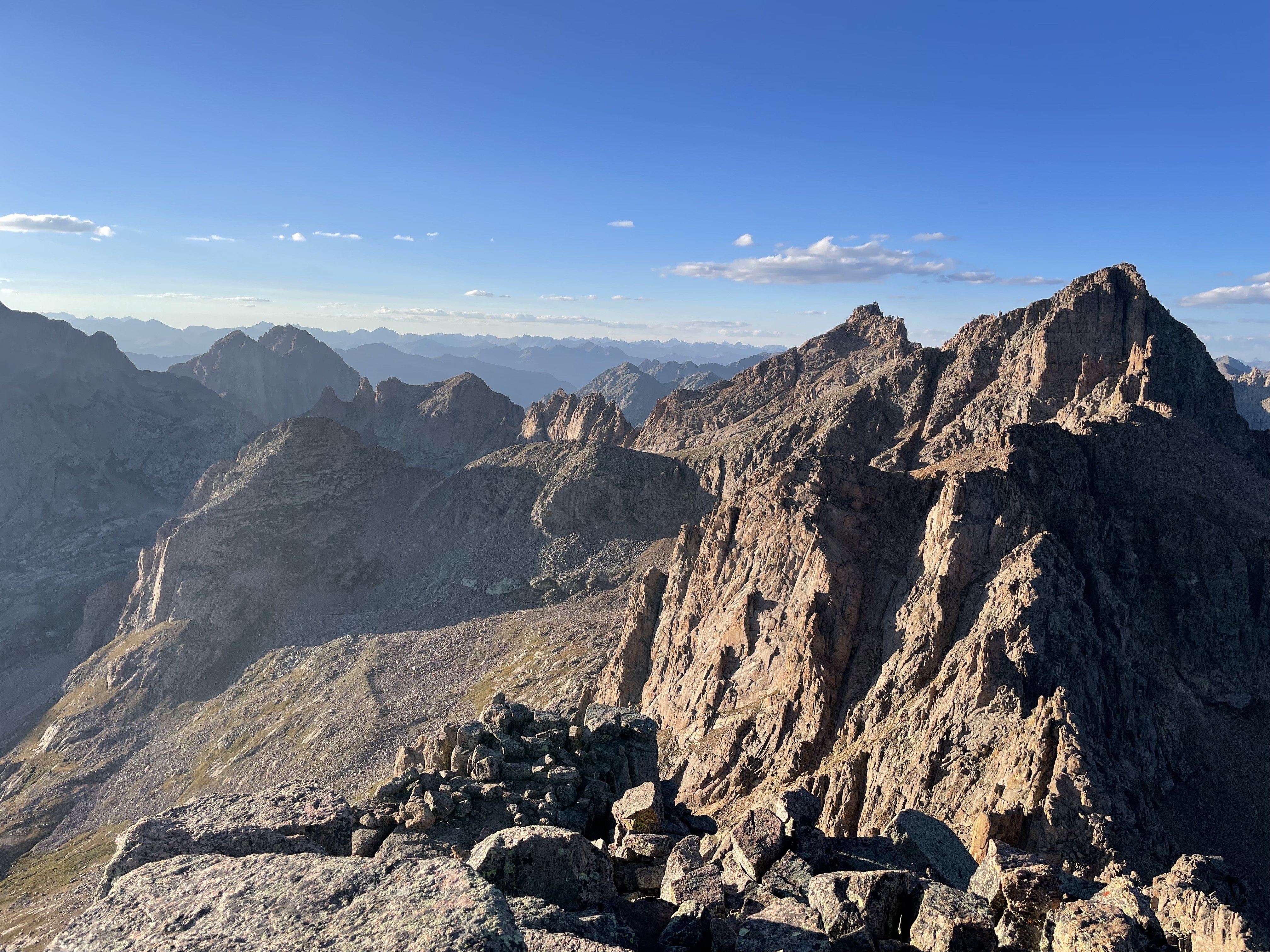 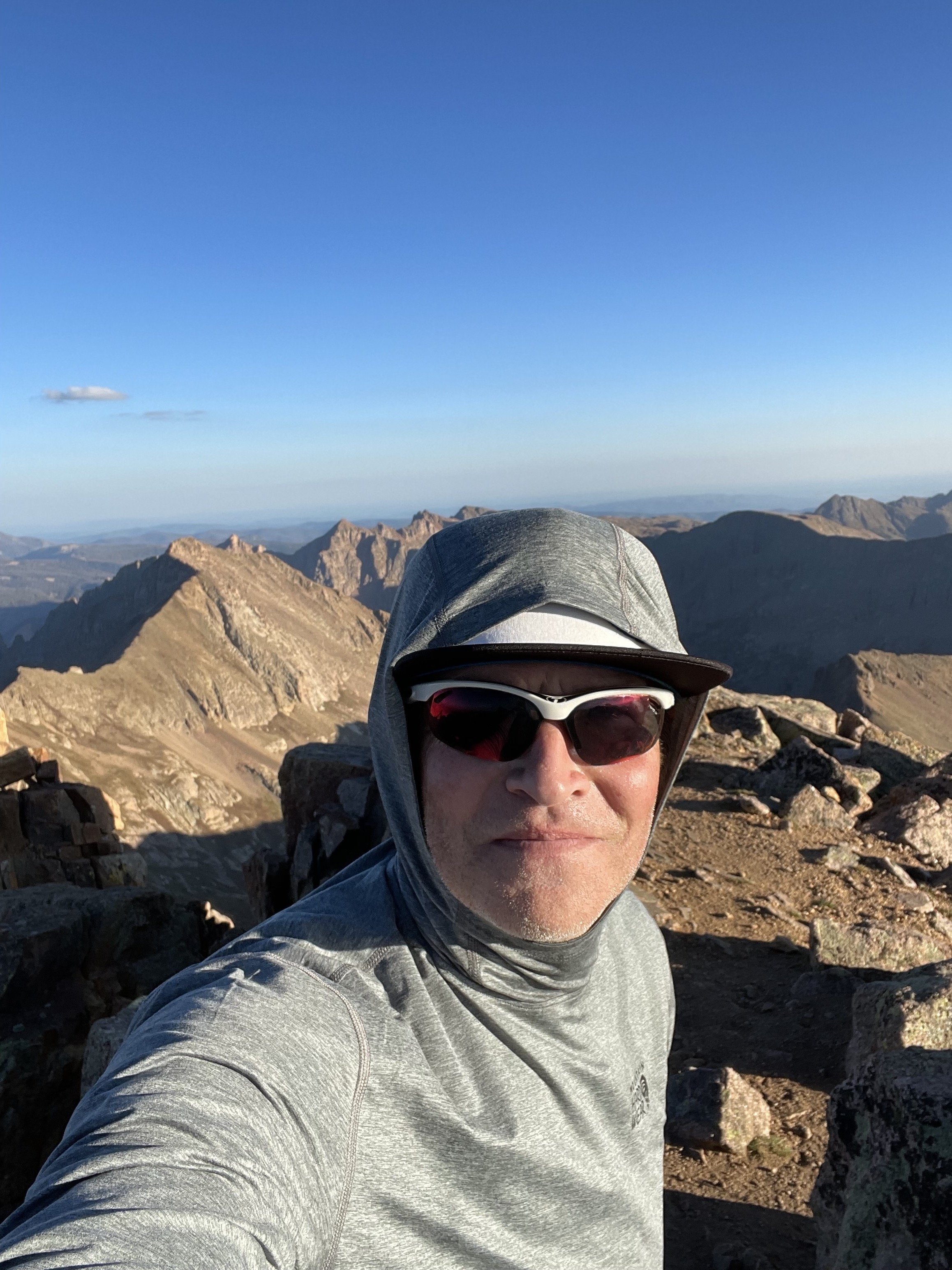