I climbed the east face of Cronin Peak, a Colorado Centennial Peak ranked 75th tallest in the state.  Due to the heavy snow pack this year in Colorado, I was able to make this hike a snow climb.  The most popular routes are the north or east ridge from Baldwin Gulch.  Although the east face gets skied regularly, I wasn't able to find any climbing trip reports of this route.  When I caught my first glimpse of the peak and saw several possible snow lines from the base of the face to the summit I was excited to attempt it.

Formerly known as North Carbonate, this mountain was officially named Cronin Peak by the Department of Interior on May 12, 2005.  Cronin Peak is named in honor of Mary Cronin (1893-1982) who became the first woman to climb all the Colorado 14ers in 1934.

On Thursday evening, I was able to drive two miles up the four-wheel-drive Baldwin Creek Road until avalanche debris blocked further progress.  I found a pull out to park in and fell asleep around 10:30.  I woke up at 3:05 and was hiking in the dark at 3:30.  After 20 minutes and one mile, I had to deal with the Baldwin Creek crossing at the standard four-wheel-drive trailhead.  The water was high and running relatively fast.  I found a short area about 30 yards south of the road crossing and basically had to jump into the creek for ten feet with the water to my thighs at the deepest point.  I put grocery bags over my socks before I put my boots on and then I put garbage bags over my boots when I crossed.  It helped, but my feet still got wet.  The second crossing a short way up the road had a two-log bridge for hikers, and the third crossing wasn't that wide or difficult to negotiate.

I continued hiking up the road in the dark on the standard route to Mount Antero.  I struggled with low blood sugar and stopped to eat something a few hours into the hike.  When I reached 12,000' where the switchbacks start on Mount Antero, I left the trail and traversed southwest to an unnamed lake at the head of Baldwin Gulch.  I was able to avoid most of the snow patches on the traverse, which wasn't too difficult as I tried to stay above tree line.  Once at the lake, I hiked more easterly over snow and rock fields to the base of the east face.

I reached the snow climb at 6:00 just as the sun was hitting the summit of Cronin Peak.  I geared up and started up the center of the face picking the most direct line.  Snow conditions were perfect and I used my Salomon S-Lab X Alp Carbon GTX mountaineering boots with aluminum crampons.  These boots are essentially stiff trail running shoes with a built in gaiter.  They are light weight, but adequate for easy and moderate snow climbs.  There was 1,200' of snow climbing, which ends very close to the actual summit.

I made it to the top at 7:30 and spent 30 minutes eating, drinking, taking photos, and signing the summit register.  The wind wasn't as bad as Mount Hope last week, but there was still a stiff breeze.  I also changed my socks, which was incredibly awesome.  My feet were fairly cold from the creek crossing and snow climb.  The fresh dry socks were quite a relief and I felt like a new person with them on.  I descended down the north ridge until I found a suitable point to drop east back to the unnamed lake.  The snow was too firm to glissade.  As I traversed back to the Mount Antero trail, I came across an abandoned campsite.  It was kind of creepy with a gas grill, food and garbage scattered about, a mattress, and hundreds of pill bottles.  I thought it might be a meth lab or something.

I don't have a tool to measure slope, so I don't know how steep the face was, but I didn't think it was to bad.  Maybe 40 degrees at the steepest point near the top.  Anyway, the hike down the road was uneventful and I just walked through the creek and got soaked on the way out since I was only a mile from my vehicle.  I got back to my trailhead at 10:30 for a seven hour car-to-car day.  The road was moderately challenging and fun to drive both up and down.  I stopped at my favorite brewery on the way home, Eddyline Brewery in Buena Vista, Colorado.  After I got home, I went to Hobby Lobby and Home Goods with my wife! 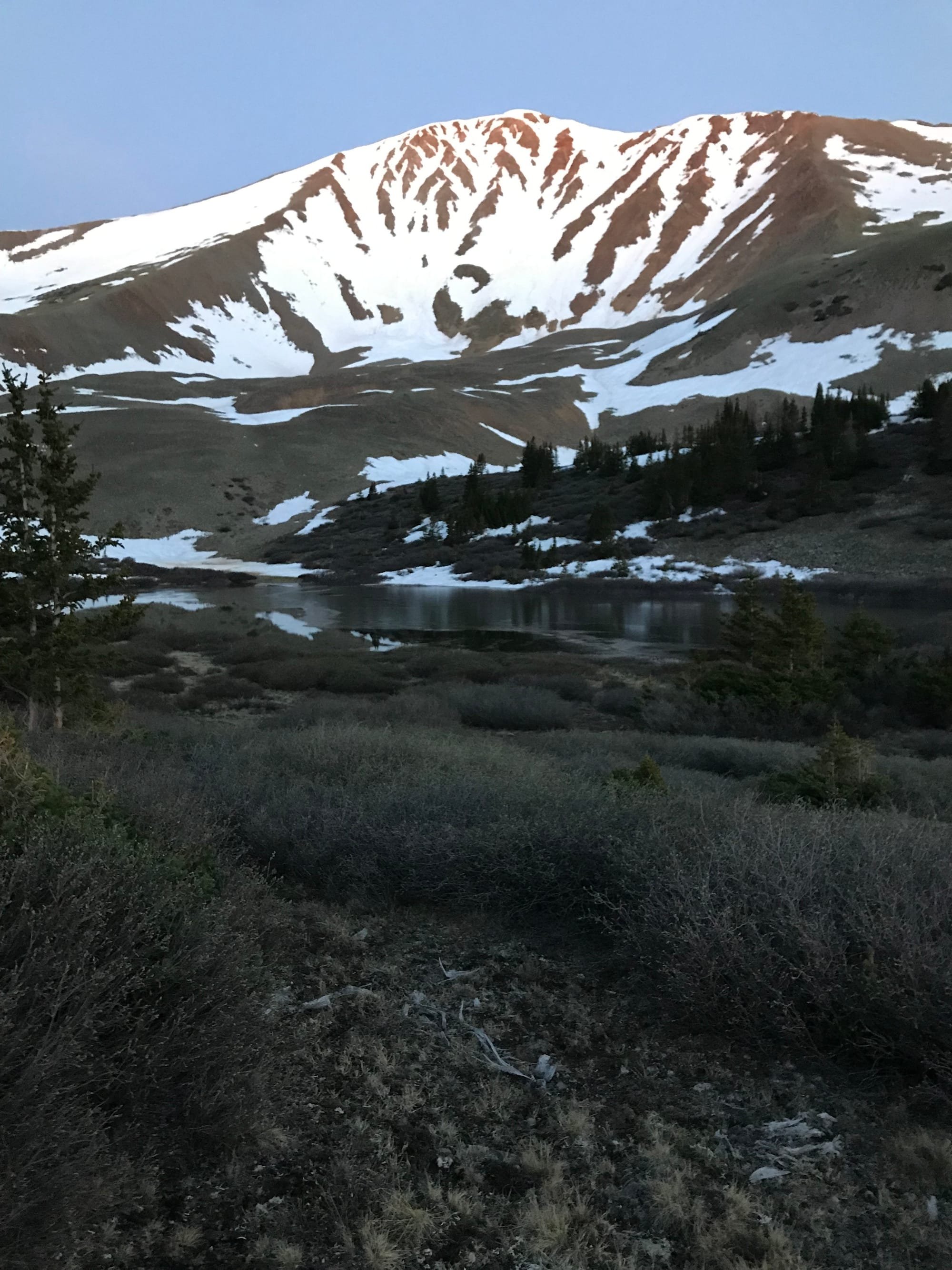 Cronin Peak from the unnamed lake below the east face. 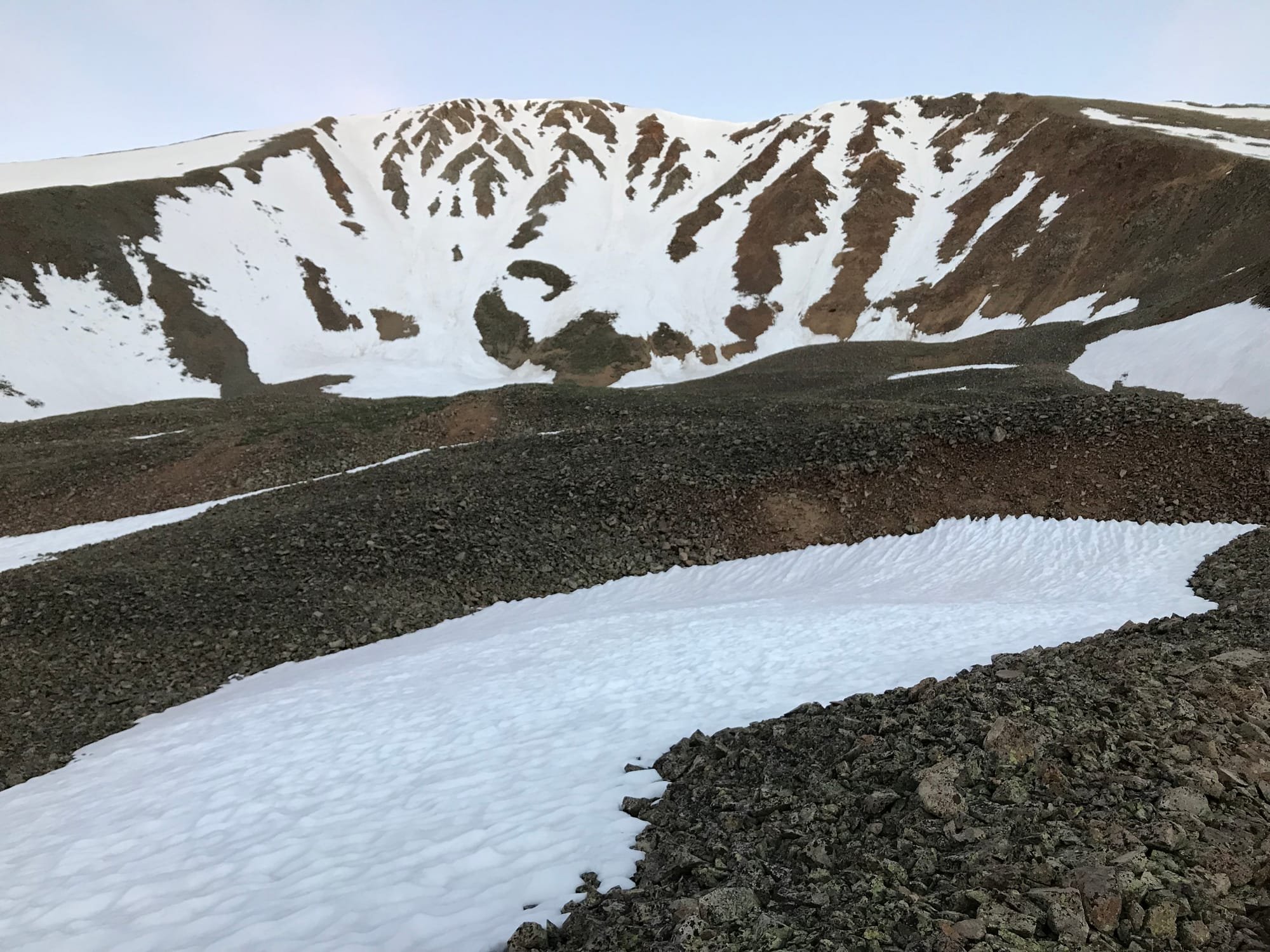 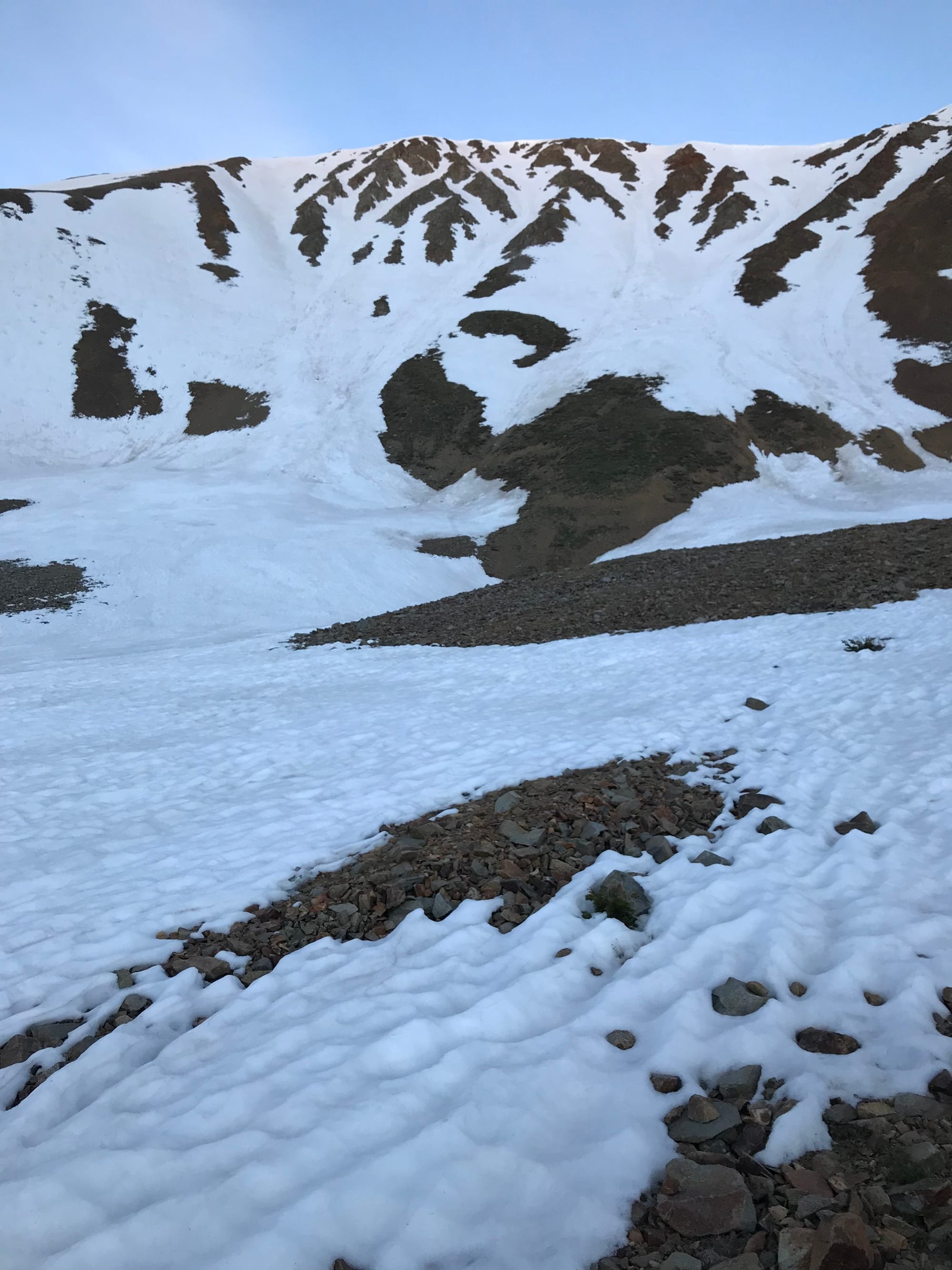 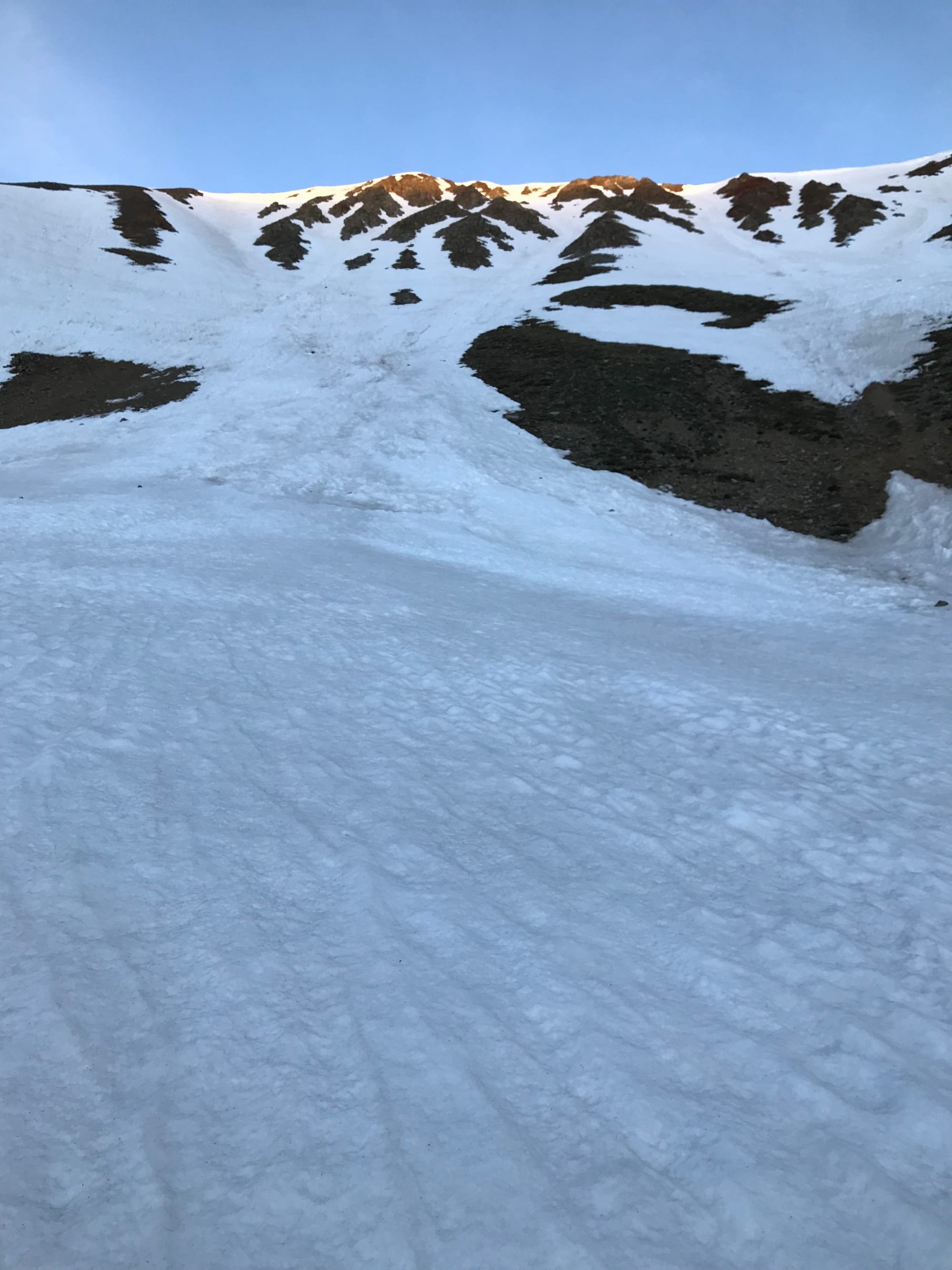 The start of the snow climb. 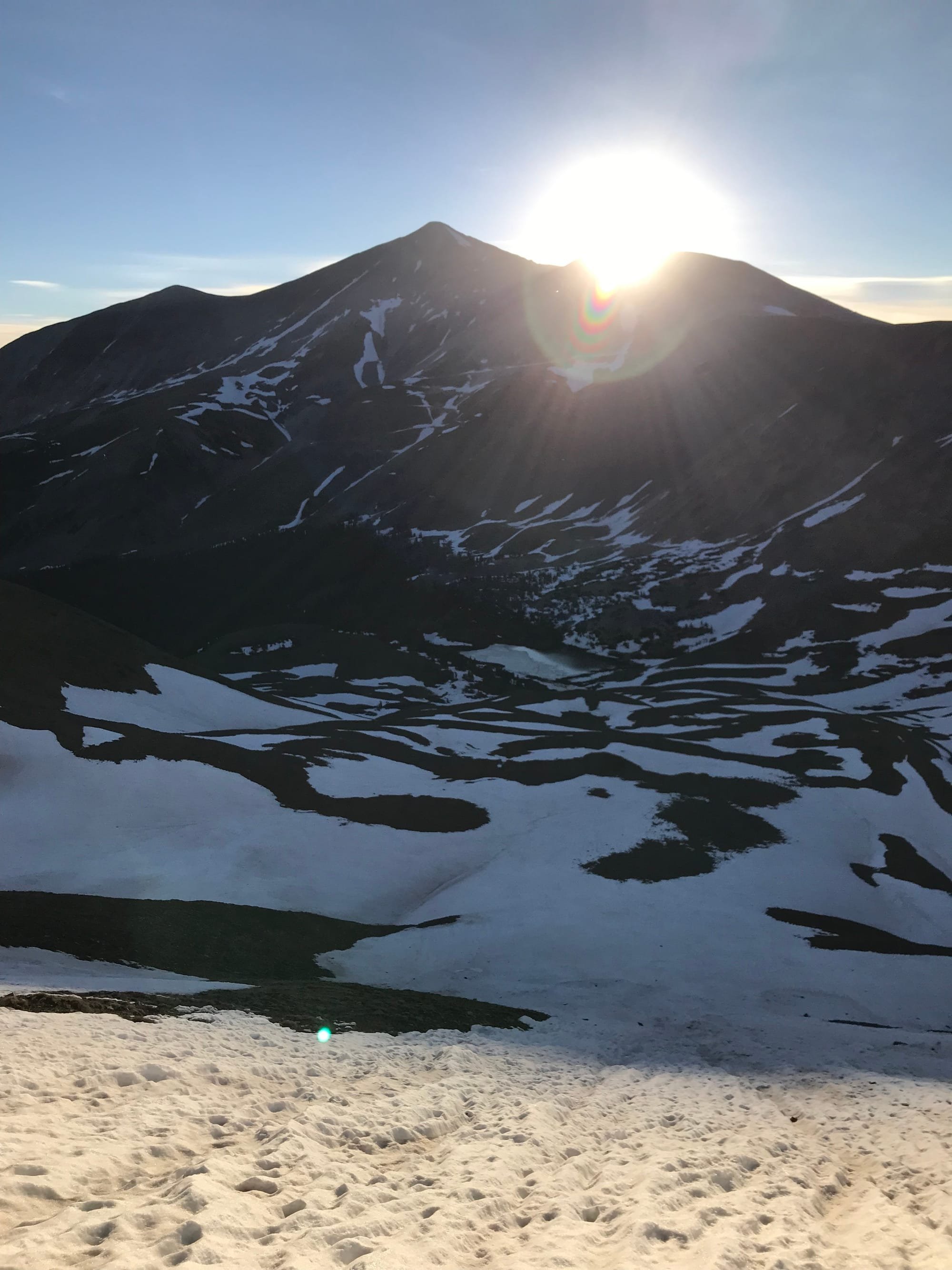 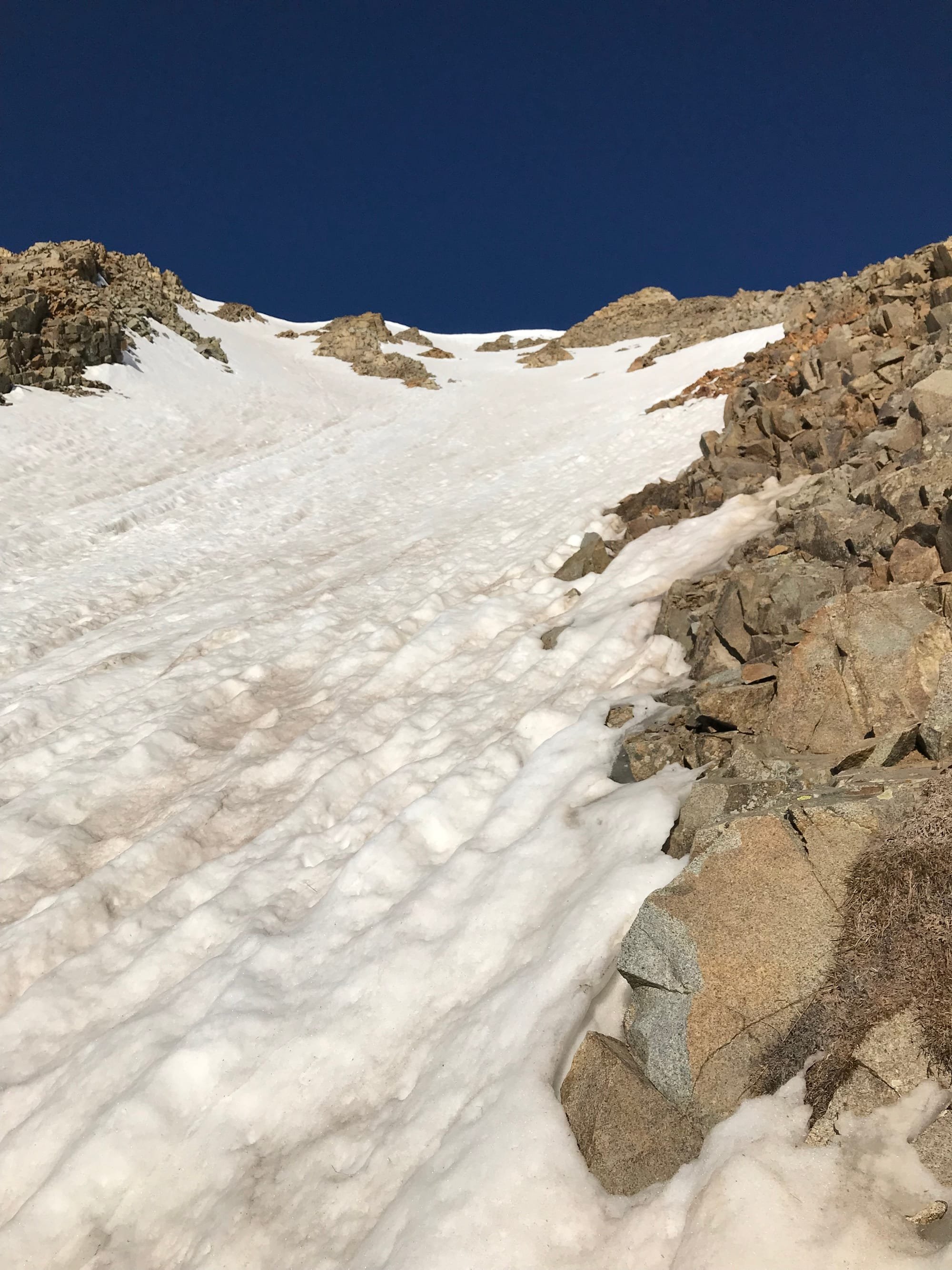 Looking up after climbing about one-third of the way up. 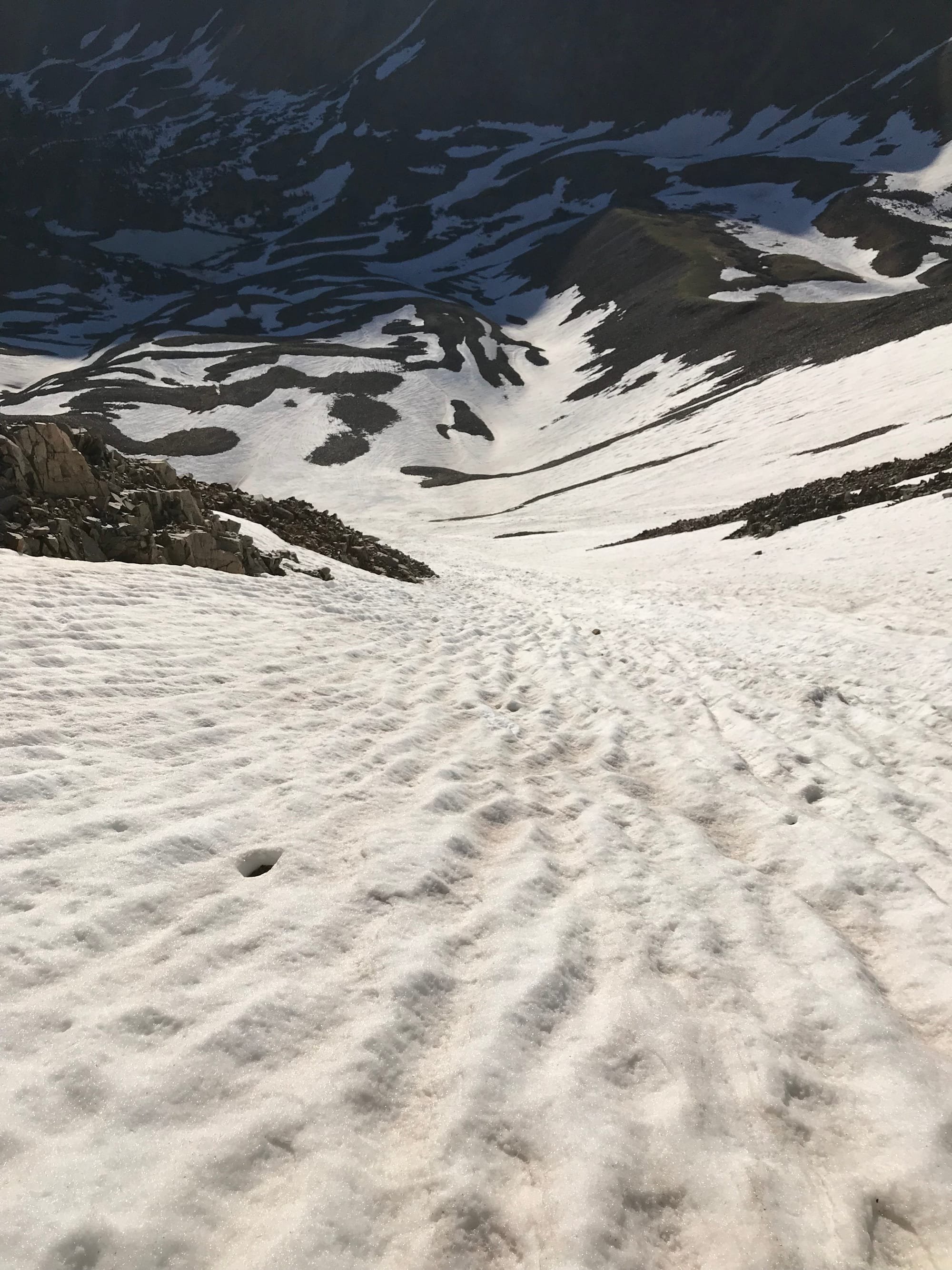 Looking down after climbing about one-third of the way up.

Looking up after climbing about two-thirds of the way up. 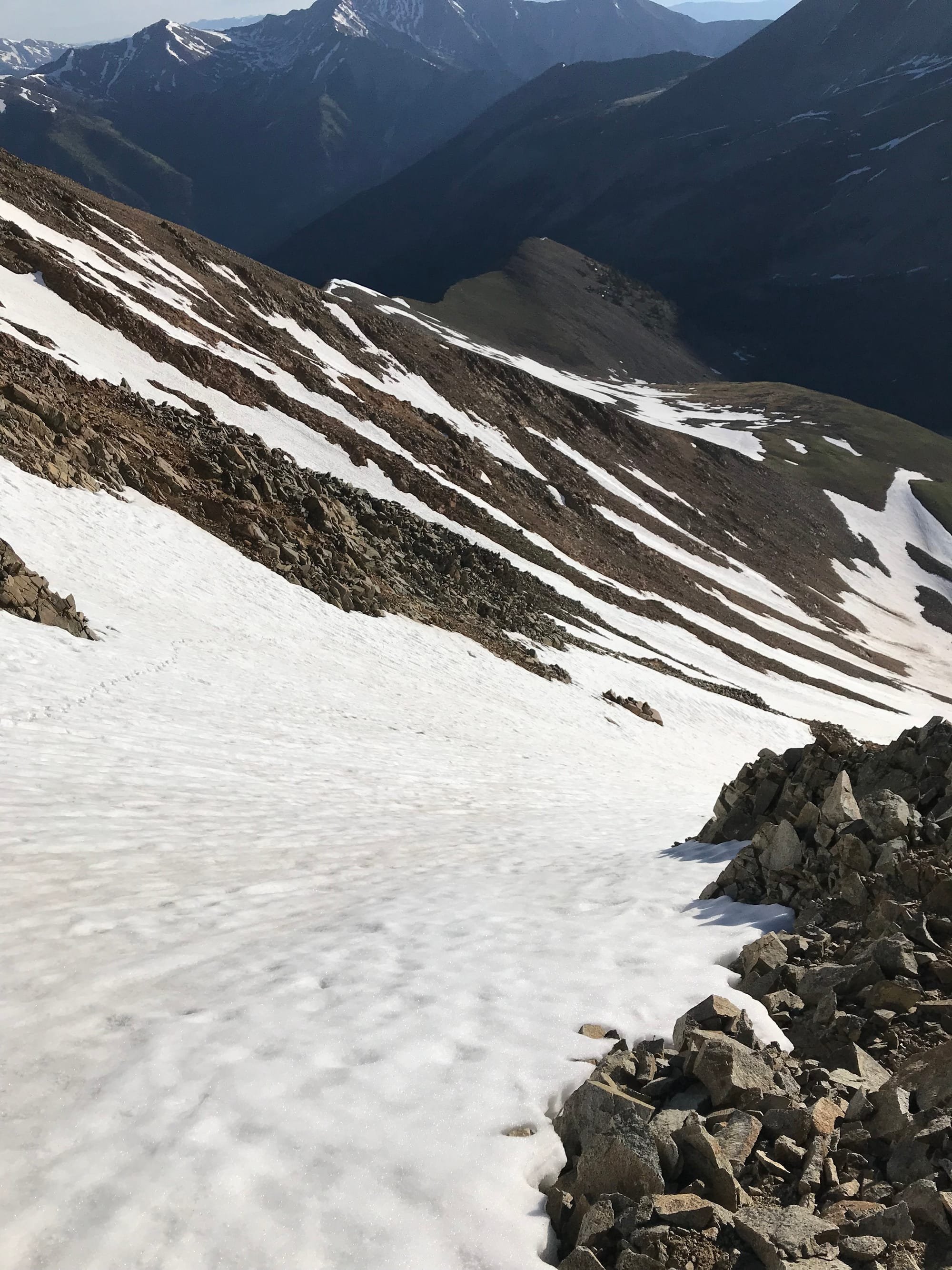 Looking down after climbing about two-thirds of the way up. 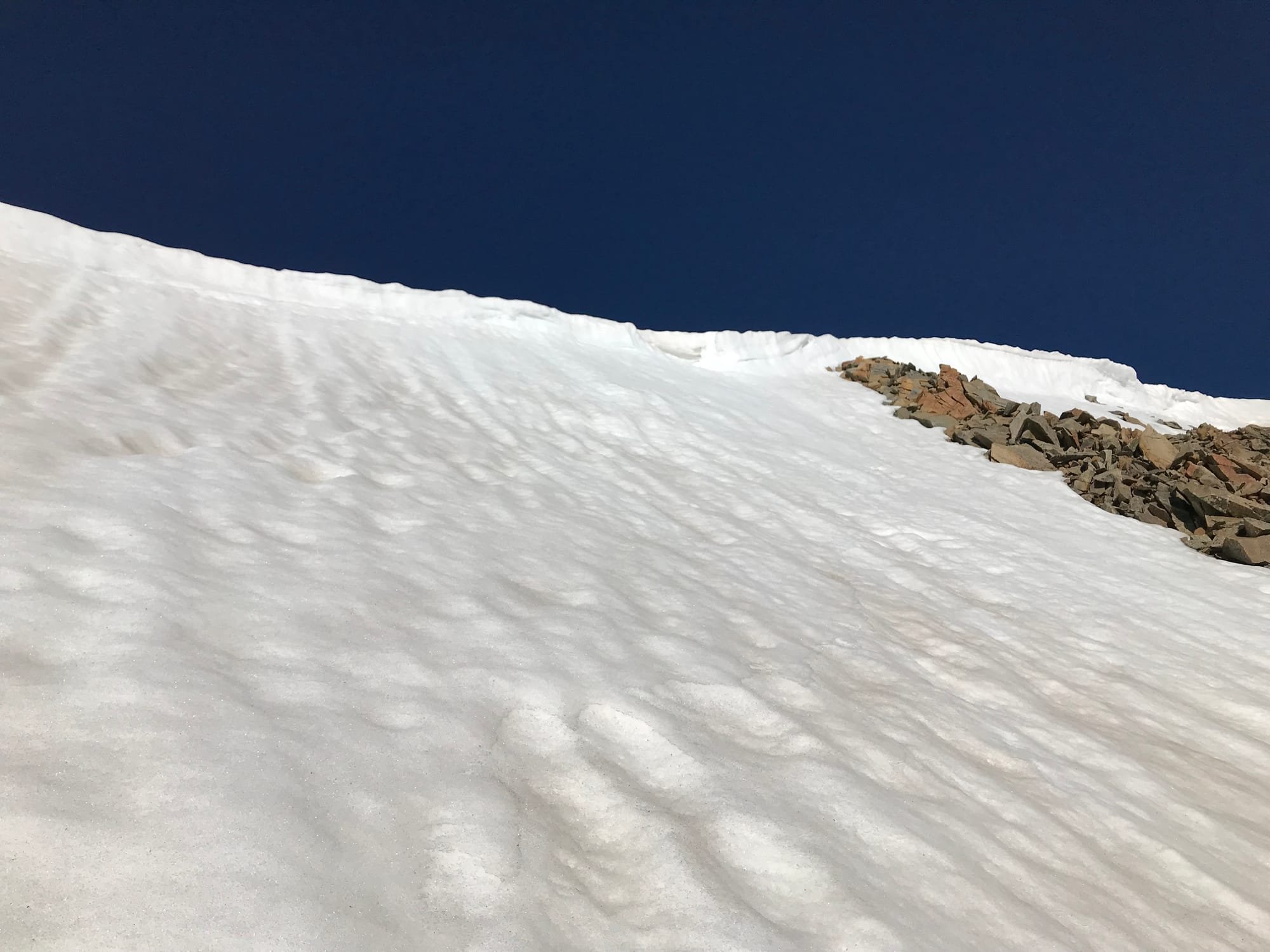 The top of the snow climb on the east face of Cronin Peak.

Looking down the full length of the climb on the east face. 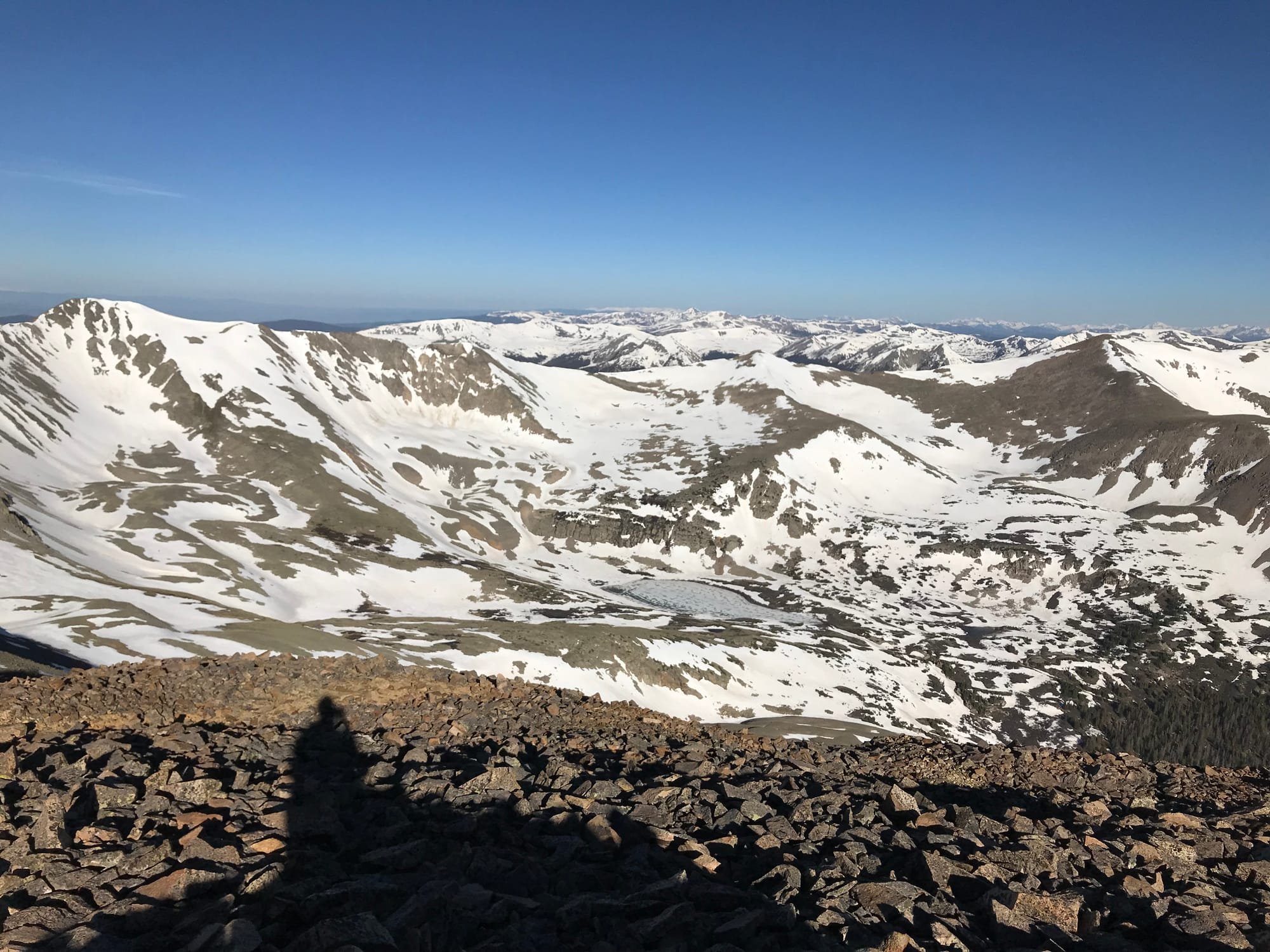 Baldwin Lake to the west. 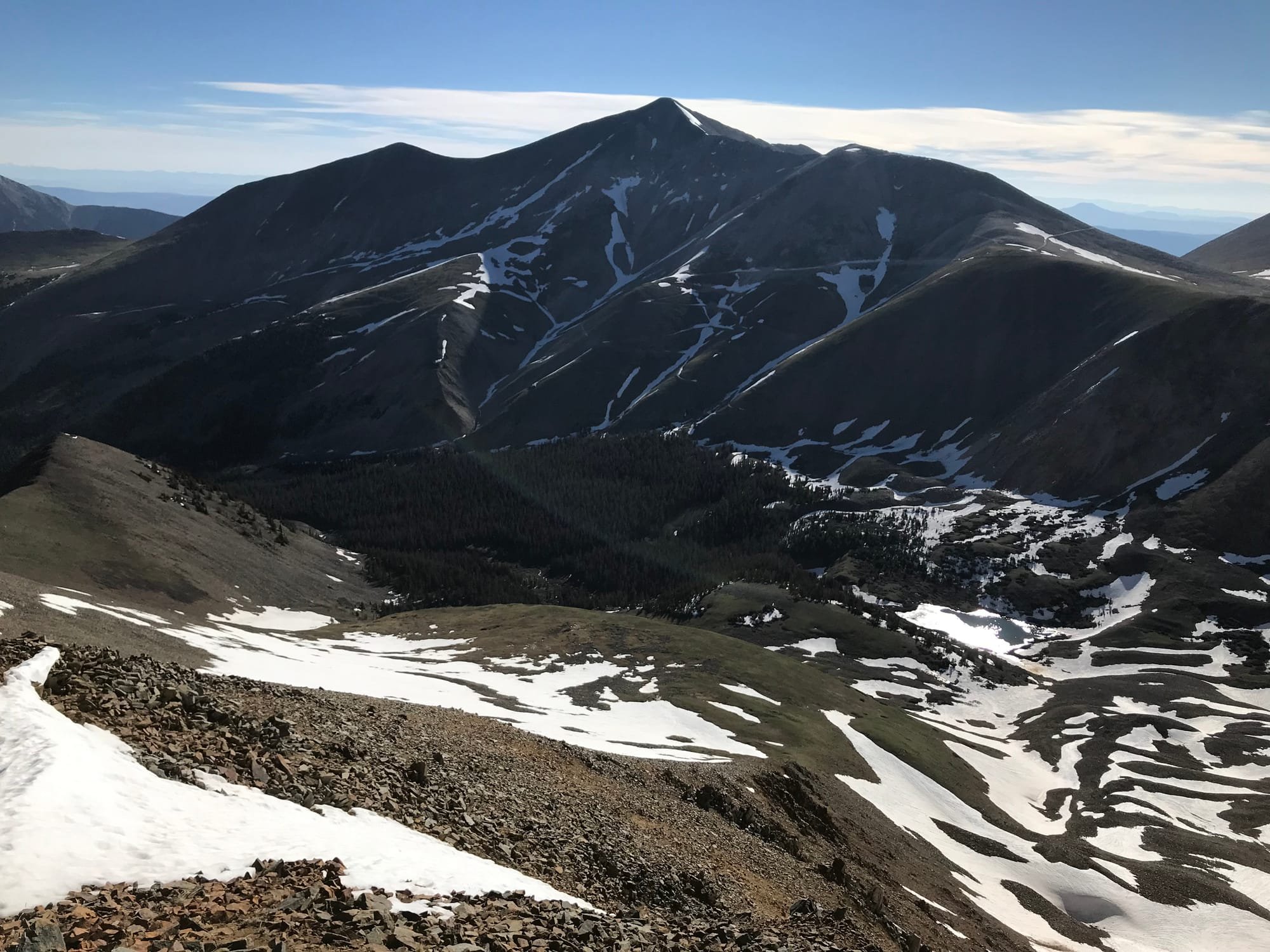 Mount Antero to the northeast. 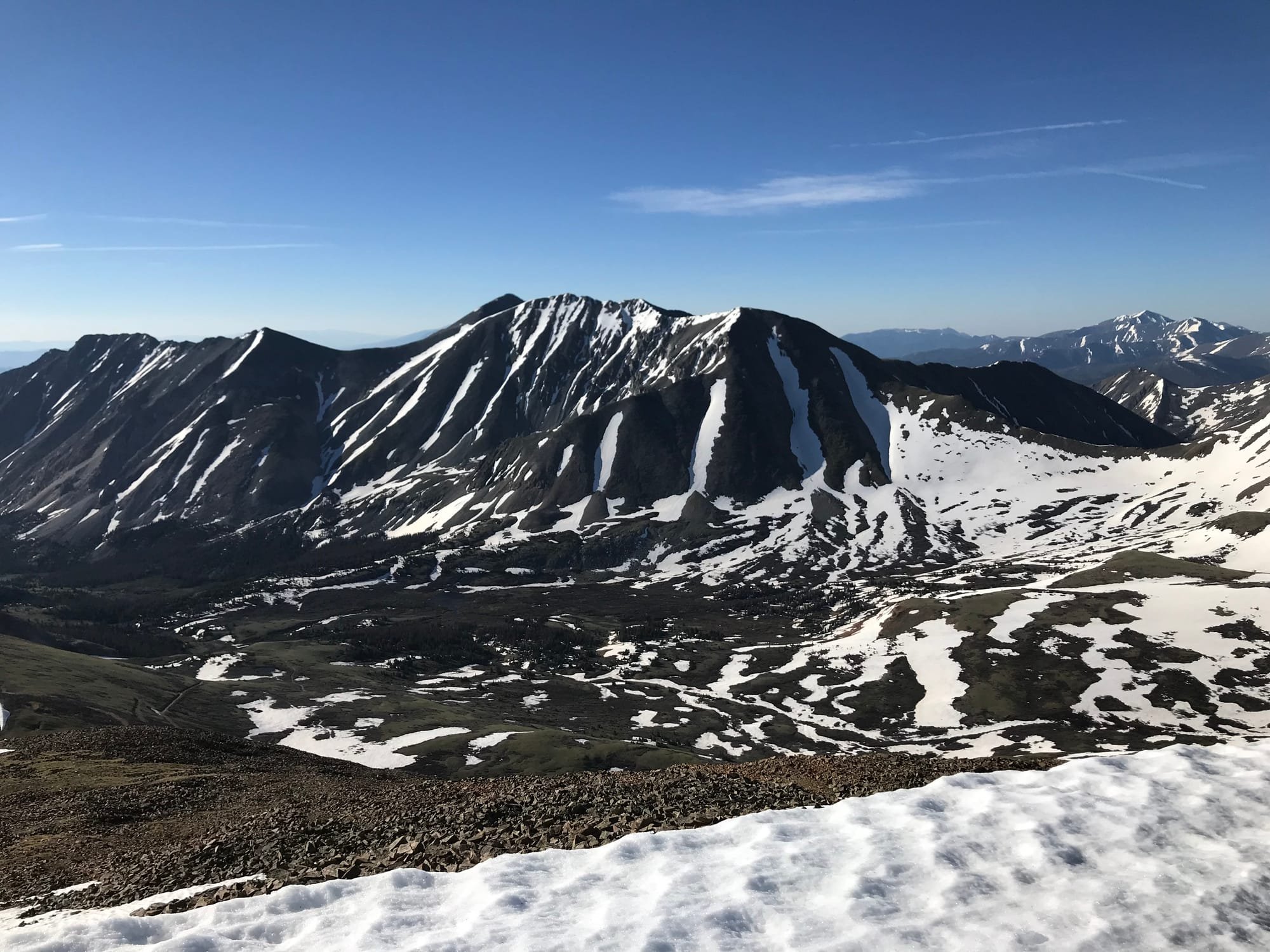 Tabeguache Peak and Mount Shavano to the southeast. 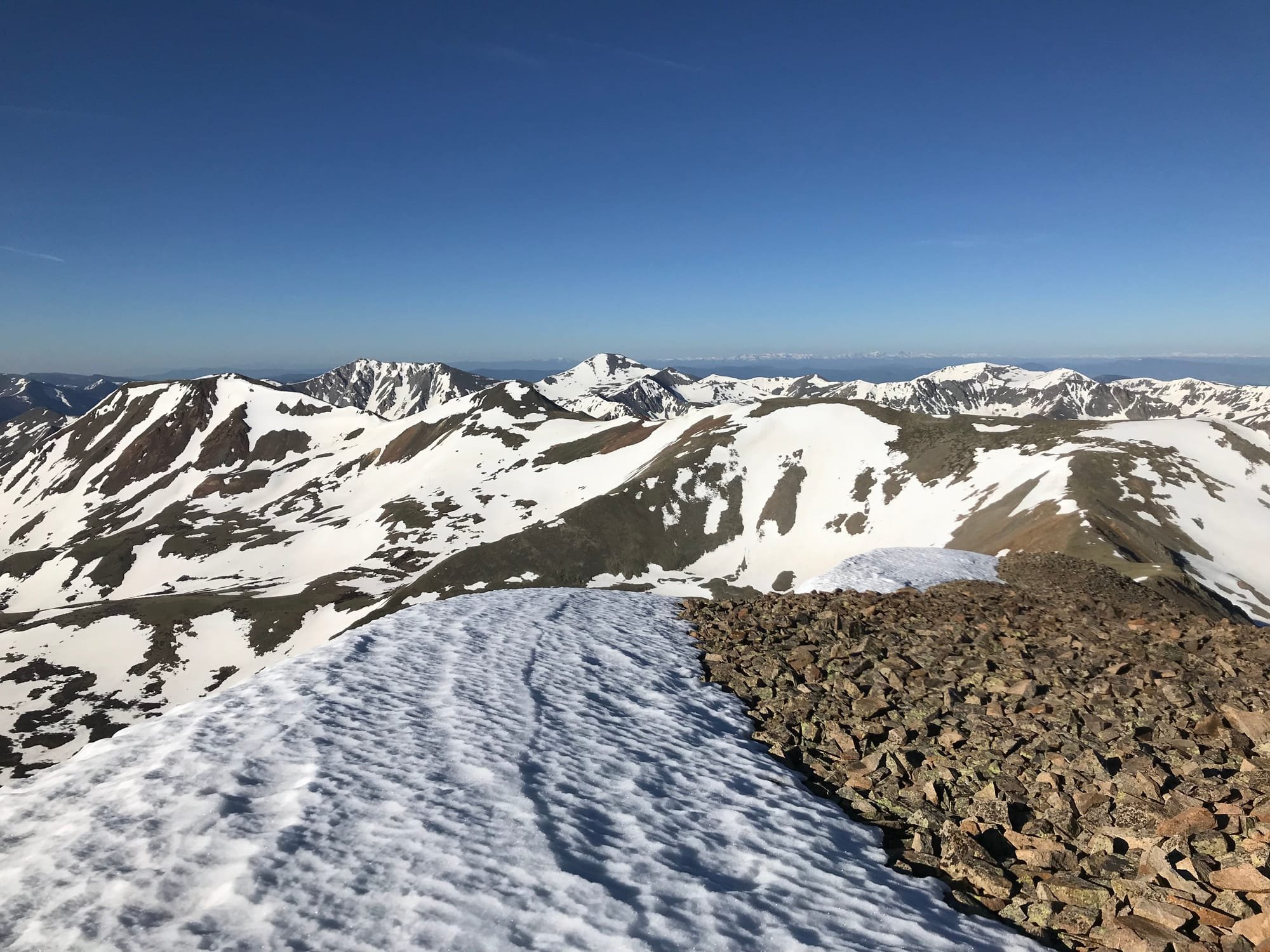 Views to the southwest. 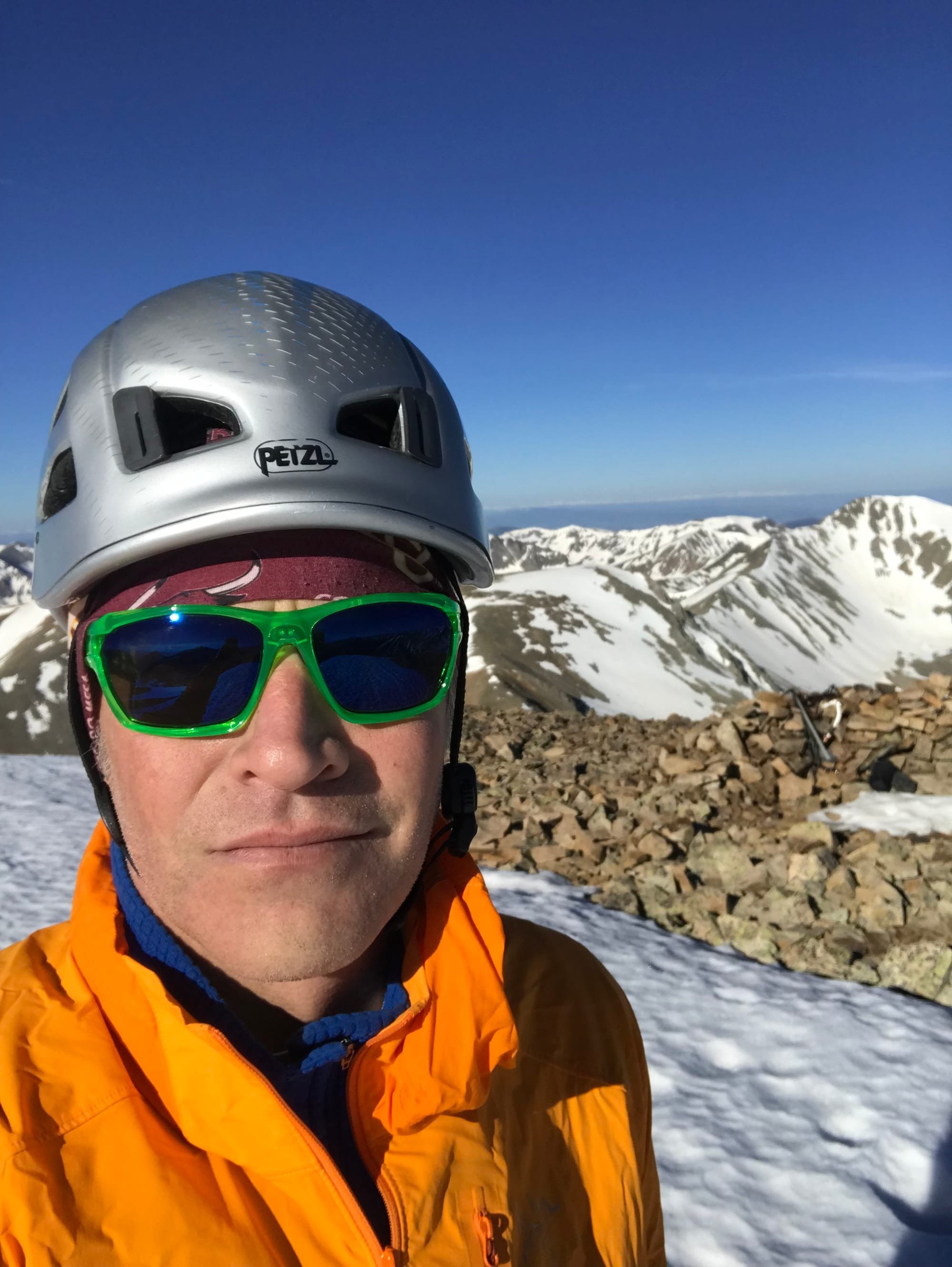 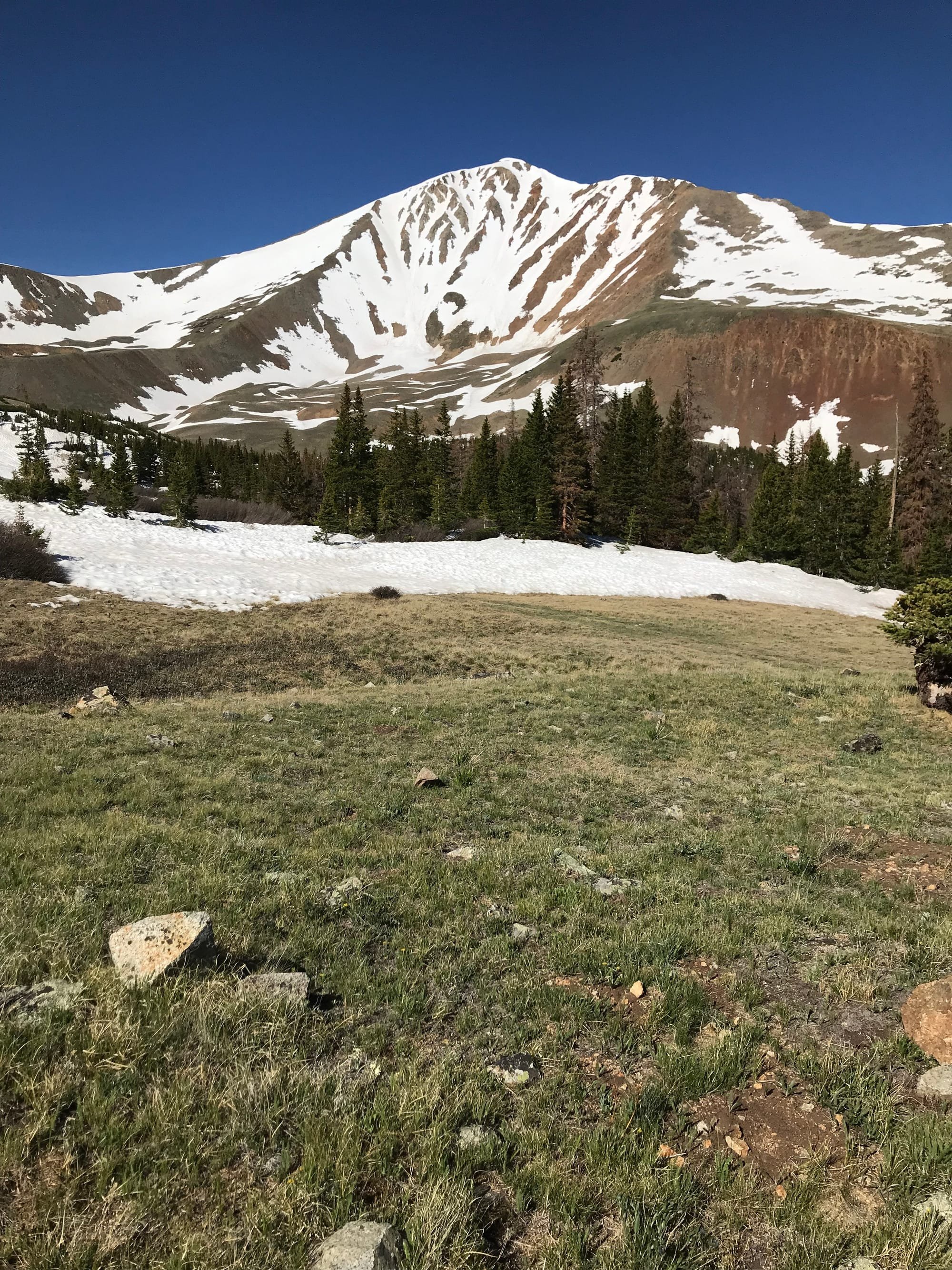 A parting shot of Cronin Peak on the hike out. 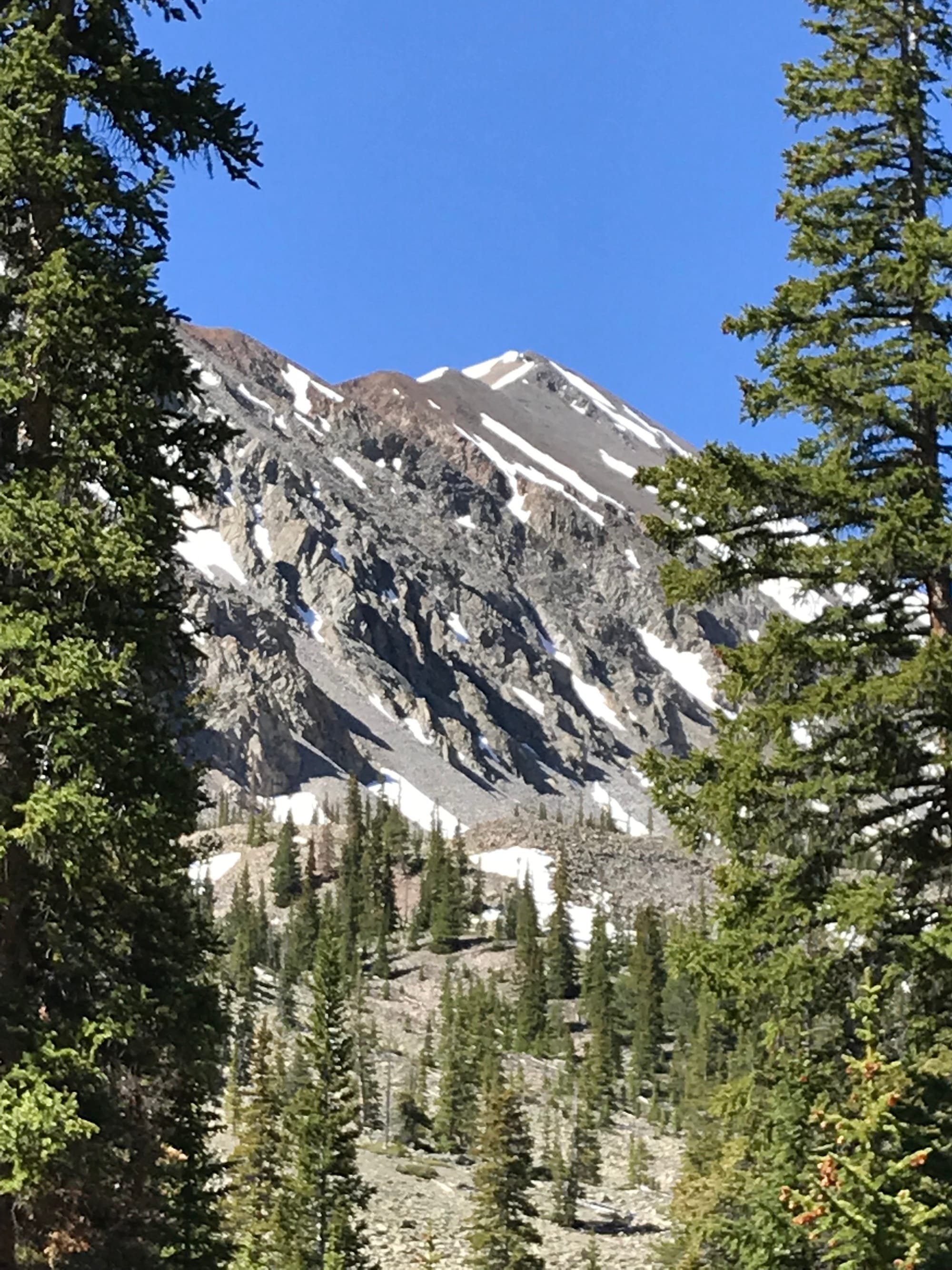 Cronin Peak from the four-wheel-drive trailhead.