After staying in Italy Monday night, we drove back to Chamonix on Tuesday, September 6, 2011, rode the lift back to the mountains, and hiked to the Cosmiques Hut again.  We had taken a couple days off from climbing and heard the weather was clearing, so we wanted to be in position to take advantage of better conditions.  The four of us got up early Wednesday morning and left the hut at 2:00 to attempt Mont Blanc.  Mont Blanc is the highest mountain in the Alps, Western Europe, and the European Union at 15,782’.  Our goal was to climb the Three Monts Traverse route.

The weather was less than ideal and seemed to deteriorate as the morning passed and we climbed the mountain.  We dropped from the hut to the Col du Midi and then began up the north face of Mont Blanc du Tacul.  We made fair progress on the headwall negotiating steep snow and two major crevasses before topping out on the Epaule du Mont Blanc du Tacul at approximately 13,450’.  From here we descended about 200’ to the Col Maudit where the wind really picked up.  The two parties ahead of us, which included a guide and his client, turned around and made their way back to the hut.  We quickly followed suit as weather conditions were simply not acceptable to continue.

After reaching the top of the headwall, I suggested we at least continue to the summit of Mont Blanc du Tacul as a consolation.  This mountain is one of the main summits of the Mont Blanc massif at 13,937’.  We had climbed the Chere Couloir on the peak, but did not summit so it seemed like a reasonable idea.  The initial slopes on the western shoulder of the mountain were fairly easy.  However, as we neared the summit the wind became increasingly strong and maintaining your balance was remarkably hard.  We fought our way up a narrowing ridge in the strong winds and gained the summit by scrambling up some exposed rock.  It was still dark because of our early departure from the Cosmiques Hut, so the only thing to enjoy was the satisfaction of climbing a peak in miserable conditions.  The blowing snow continued to sting our eyes as we quickly made our way back down the mountain and to the top of the steep snow that would lead us to the glacier below.

As we made our way back to the Cosmiques Hut, several parties were heading out for the day after sleeping in.  Our impression was that many of them were hiking to Mont Blanc du Tacul or simply stretching their legs because conditions were not improving.  After taking a break at the hut, we thought we would have a casual hike back up the snow arete to the Aiguille du Midi and then ride the gondola down to Chamonix.  Unfortunately, the weather remained relentless and the four of us ended up fighting our way up the narrow trail in limited visibility with extremely strong winds.  Although we made it safely back to the climber’s tunnel and cable car station, it was definitely a challenging climb with considerable exposure.

The winds were strong enough that the Telepherique was not running and we had to wait several hours to get back to Chamonix.  We checked back into the Hotel Richmond for one more night to contemplate the rest of our trip.  We made a strong effort to climb Mont Blanc, but ultimately didn’t get within striking distance.  It was alright to have at least made the summit of Mont Blanc du Tacul, but we were all still disappointed after having to turn around in our pursuit of Mont Blanc. 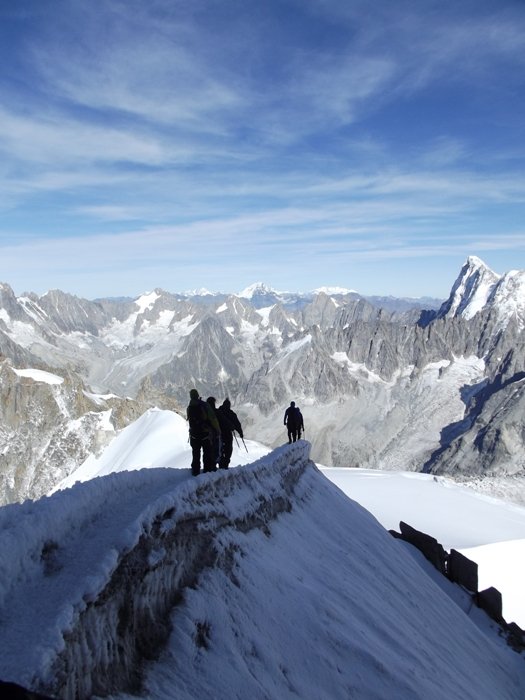 Hiking back to the Cosmiques Hut. 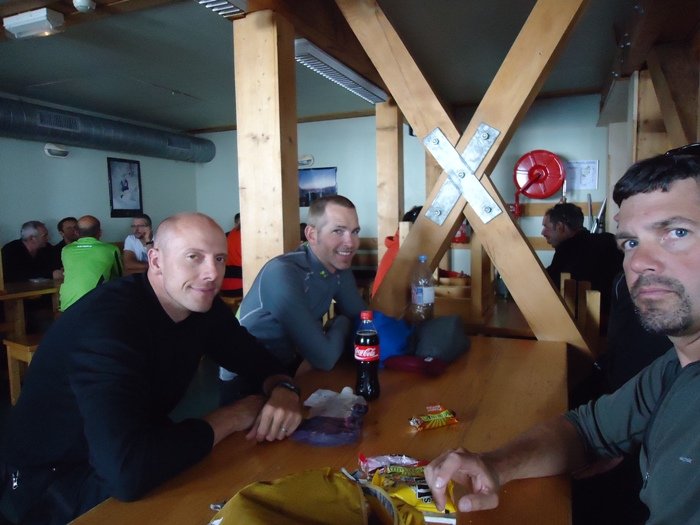 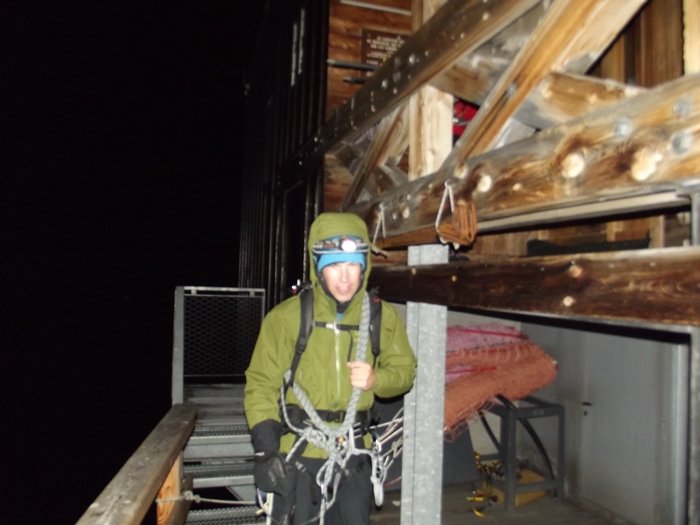 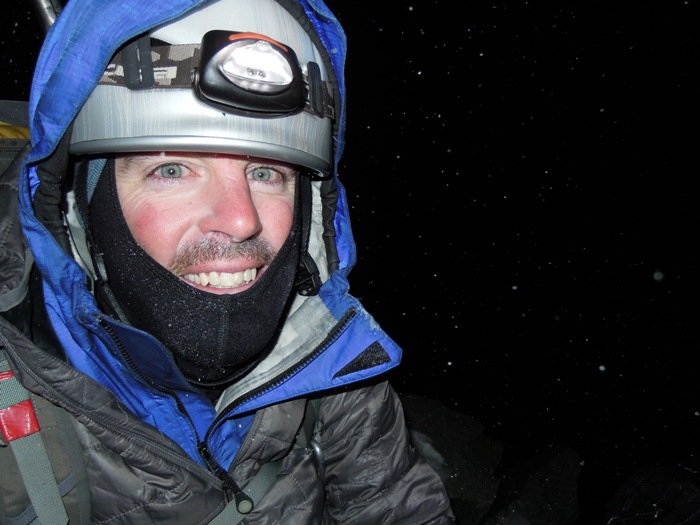 Kevin on the summit. 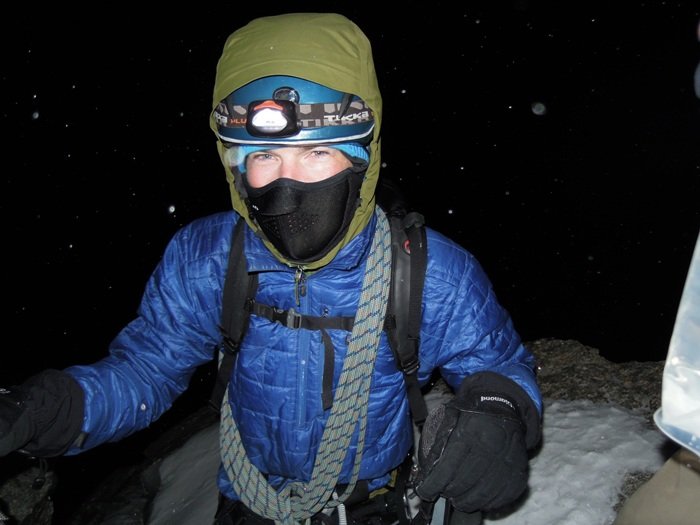 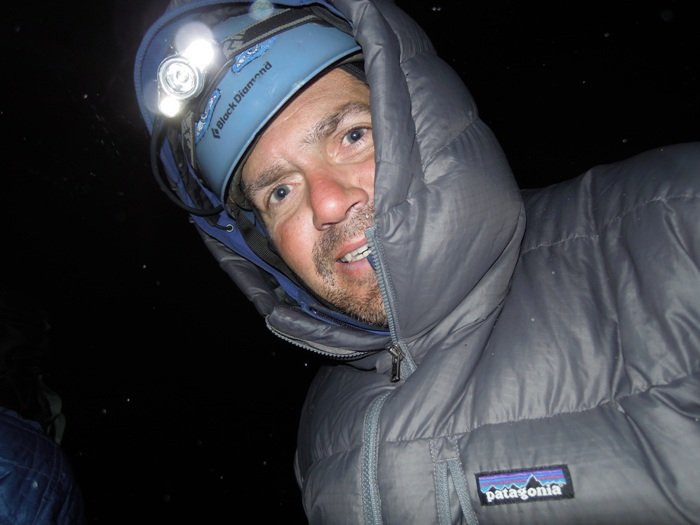 Scott on the summit. 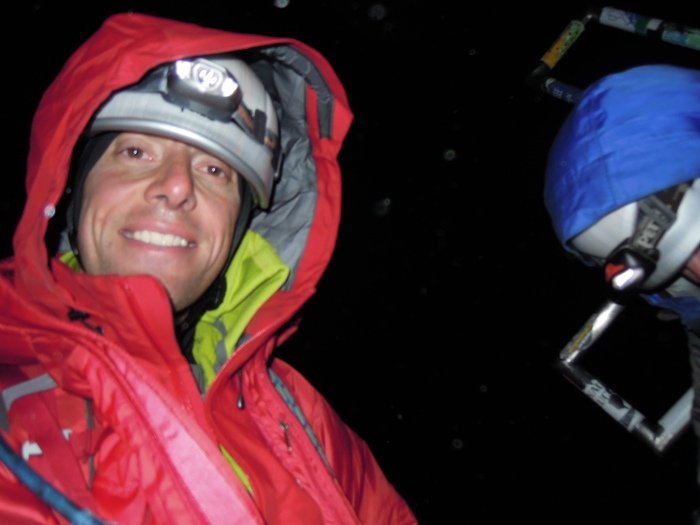 Brian on the summit. 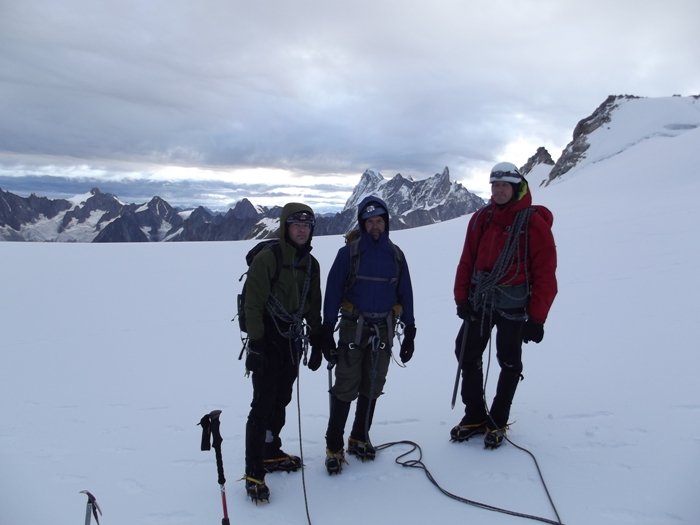 James, Kevin, and Brian back down on the glacier. 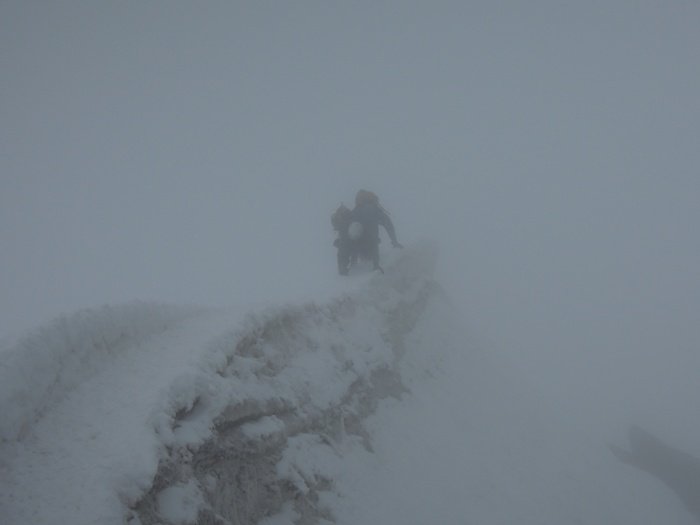 Kevin and Scott fighting their way back to lift. 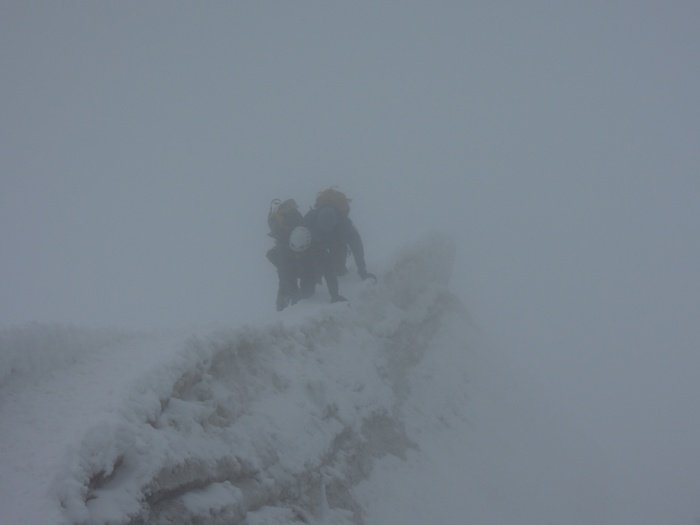