After climbing the Spiral Route on Notchtop Mountain the previous day, Jeff and I decided to tackle Blitzen Ridge on Ypsilon Mountain.  We left the Lawn Lake Trailhead at 4:30 and once again made quick work on the approach to Ypsilon Lake.  From the lake, we headed east then north on a climbers trail to the secluded Spectacle Lakes.  We scrambled back northeast to gain the initially gentle Blitzen Ridge.  You can also gain the base of the ridge by hiking north from Ypsilon Lake, but I was familiar with the scramble from Ypsilon Lake to Spectacle Lakes and it is fun with a few class 4 moves.

We followed information from online for climbing Blitzen Ridge which is generally accurate.  I led off around the left/south side of the first ace and thought it was all pretty much class 3 and 4 terrain.  I wasn't sure exactly where to go, so I did start climbing up when I neared the notch between the first and second ace which was low class 5, but I'm certain it could have been avoided if I stayed lower.  When I reached the second ace, I radioed back to Jeff and told him to start simul-climbing.  The second ace was the same as the first.  I stayed on the left/south side in class 3 and 4 class climbing until I neared the notch between the second and third ace where I went up some low class 5 rock before down-climbing to the notch.  Staying low seemed like it could have kept the climbing to class 4.

I gave Jeff a hip belay to the middle notch of the four aces.  Jeff grabbed the rack and started up what seemed like the only real roped rock climbing pitch of the day.  He went directly up the third ace to its summit where he was afraid three ferrets were going to attack him.  Lucky his yelling kept them at bay and he brought me up to his stance.  The line that Jeff took to the summit of the third ace felt like 5.4.  We did one short rappel off the back of the third ace and then did some class 4 down-climbing to get to the notch between the last two aces.

Jeff put me on belay for the fourth ace which felt like the crux of the day to us.  I basically headed directly right as our information told us, gaining little elevation.  The line I took seemed to have a couple of tricky traverse moves with very thin hands that felt like 5.5/5.6.  This initial section out of the notch was relatively short and once past the thin traverse the climbing turned to class 4/low class 5.  I may have been too high on the initial traverse as it seemed like there might have been easier ground slightly below me that may have been the 5.4 route.  I brought Jeff over to my anchor near the north ridge of the 4th ace, and then we were able to scramble over to the base of the headwall.

Jeff and I felt like the headwall and ridge to the summit was more fun than the four aces.  The scrambling was sustained class 3 and 4 with the initial headwall holding at least a few sections of low class 5 climbing.  We kept our rock shoes on for the beginning of the ridge and then switched over to trail runners once the terrain seemed to ease mostly to class 3.  We gained the summit after a lot of scrambling and were greeted with relatively strong winds on the Continental Divide.

I'm more of peak bagger and hiker than a rock or ice climber, so I planned our descent route over the top of neighboring Mount Chiquita to the south.  After we tagged our second 13er for the day, we descended southeast, then east, back to Chipmunk Lake where we picked up the Ypsilon Lake Trail back to the Lawn Lake Trailhead.  It ended up being a 12.5 hour day car-to-car.  Jeff mistakenly left his food bag with our PA pills in it on the trail after our first break early in the morning.  As a result, we completed the entire day with only one liter of water each.  The descent off Mount Chiquita took its toll on me and I was really tired after the climb. 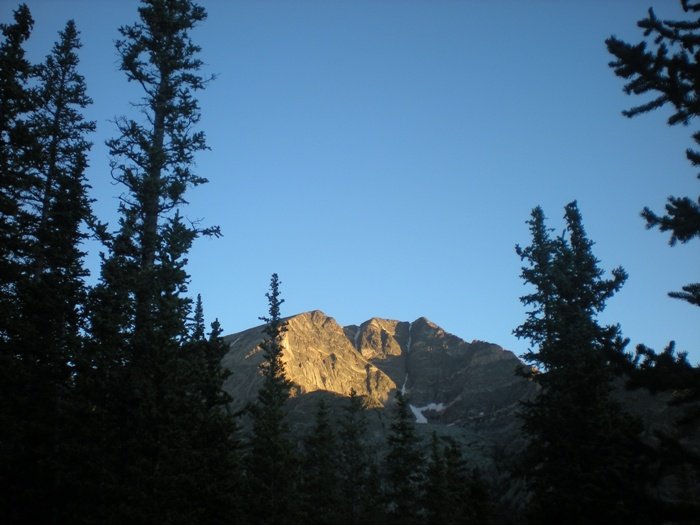 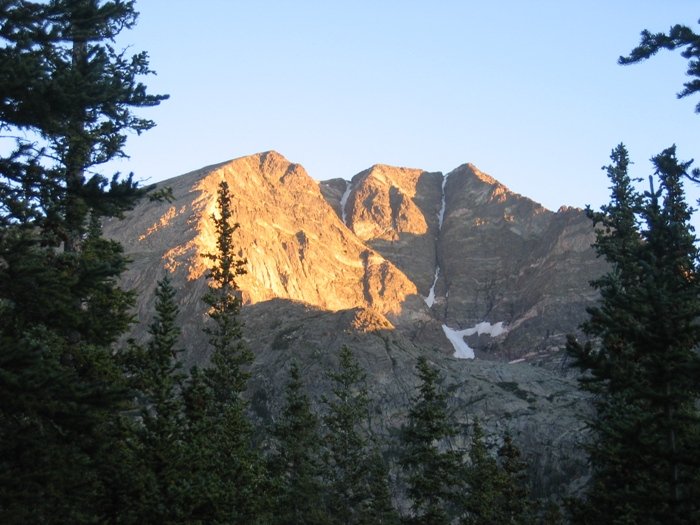 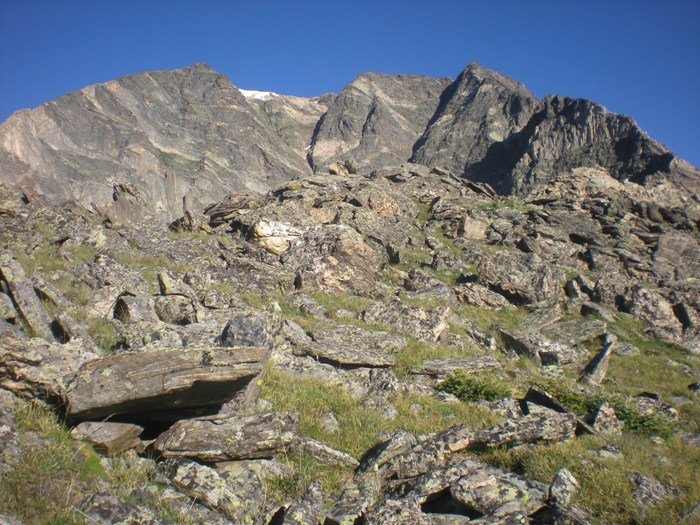 The gentle start to Blitzen Ridge. 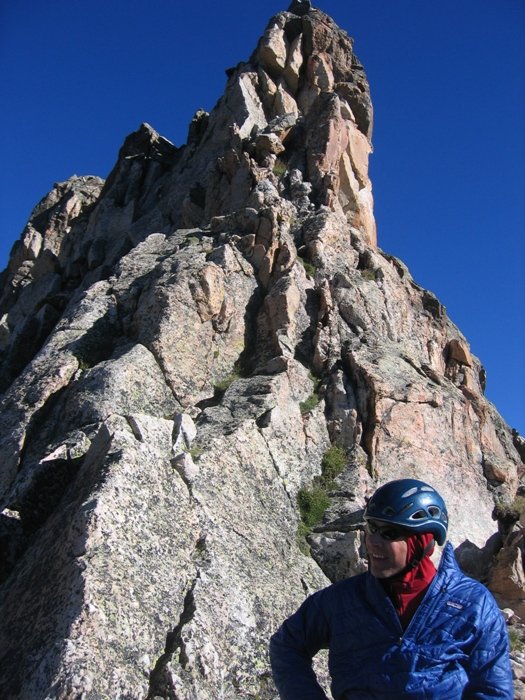 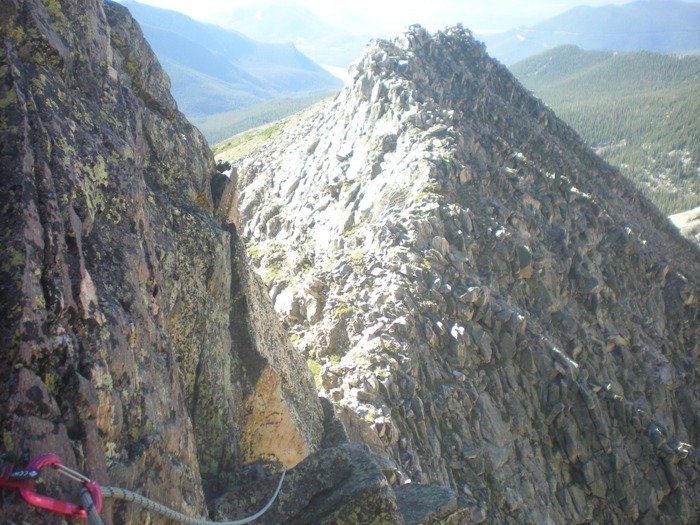 Looking back at the start of the four aces. 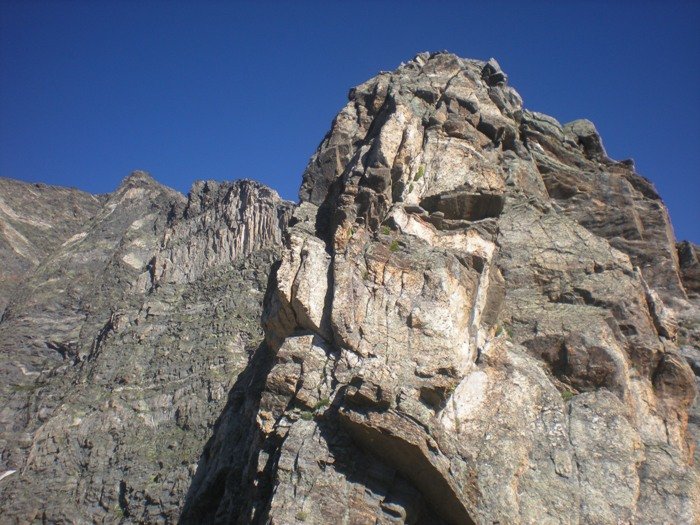 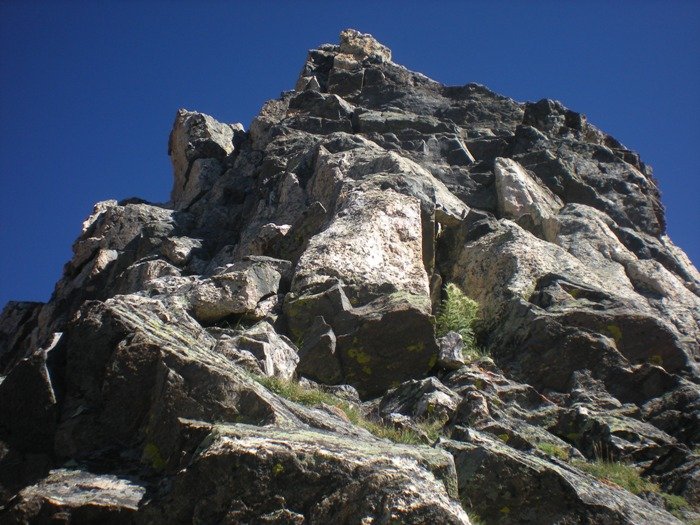 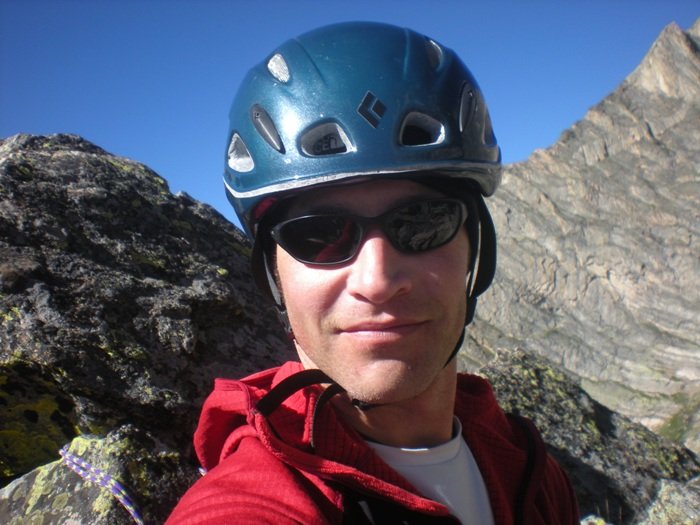 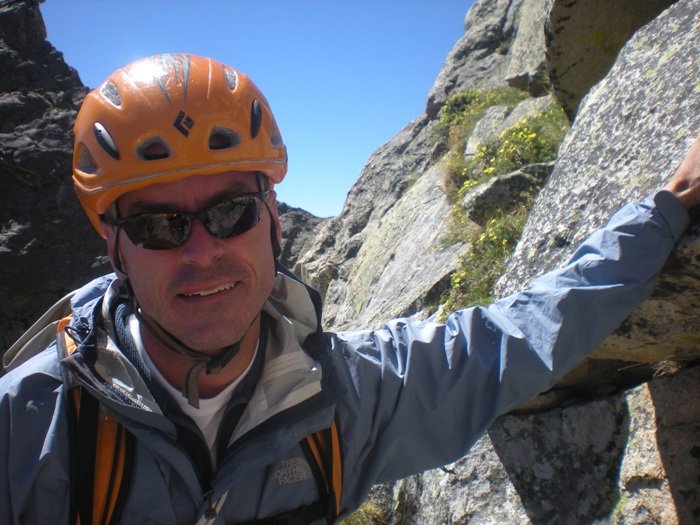 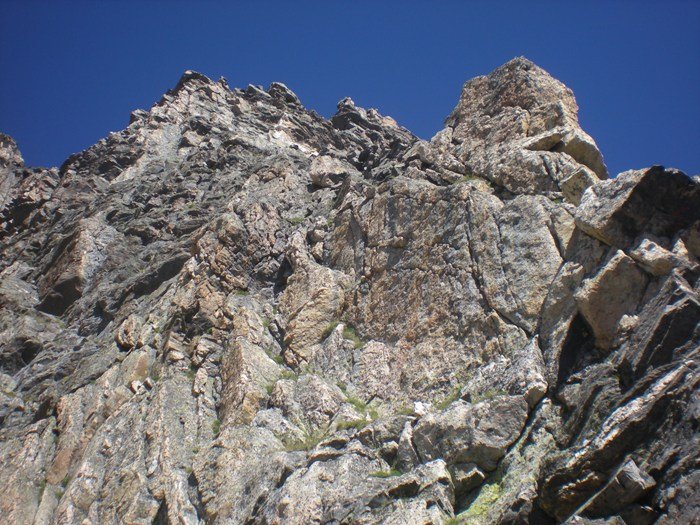 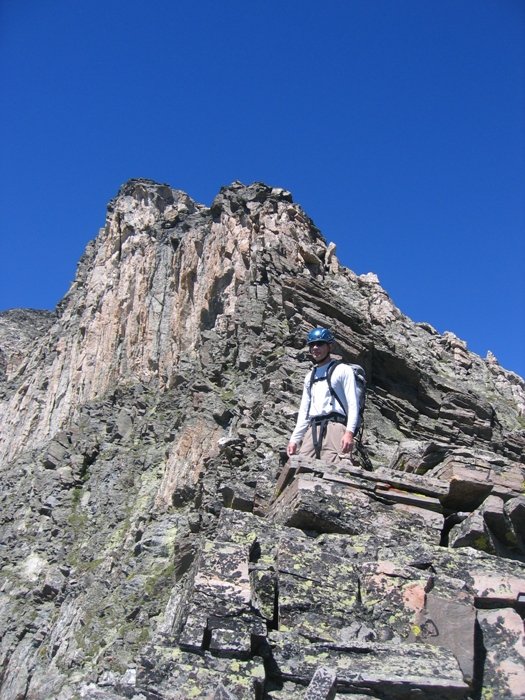 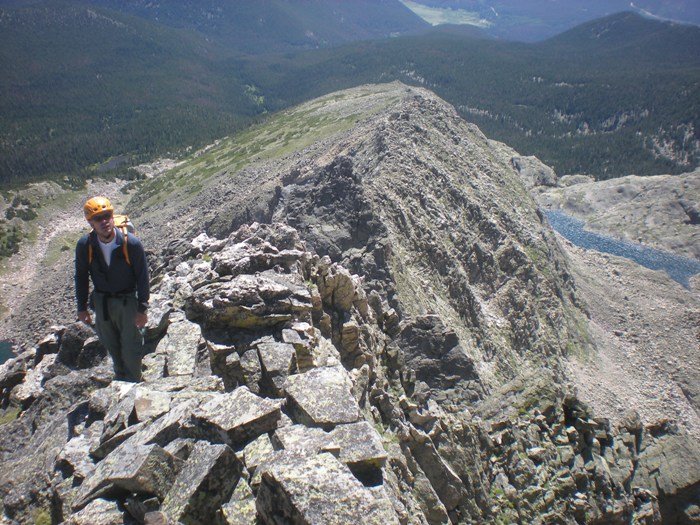 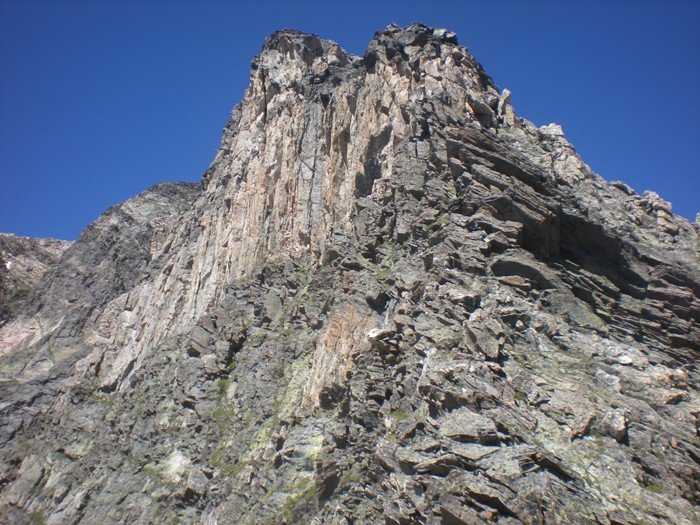 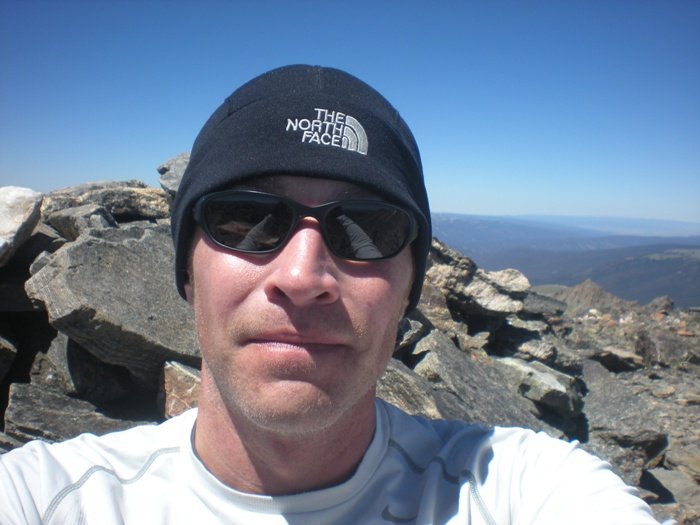 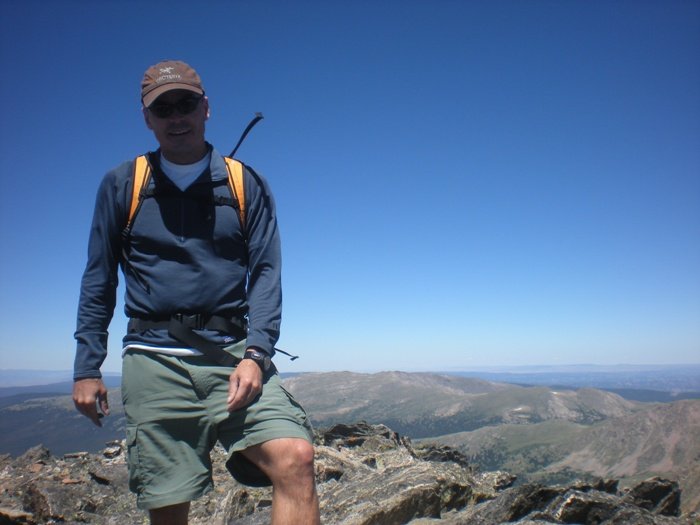 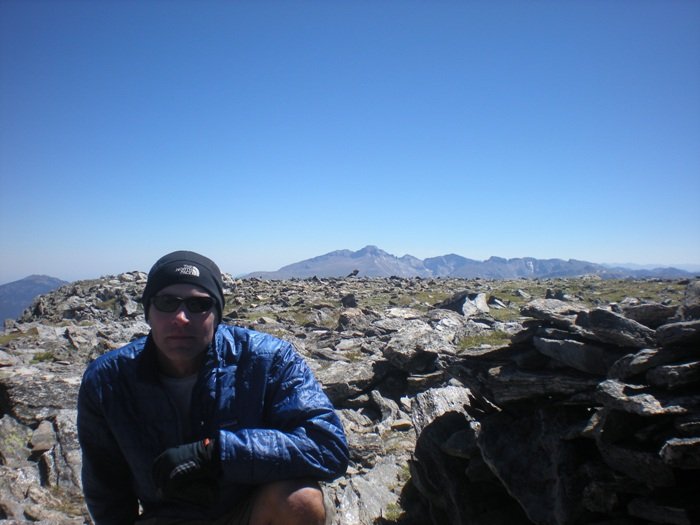 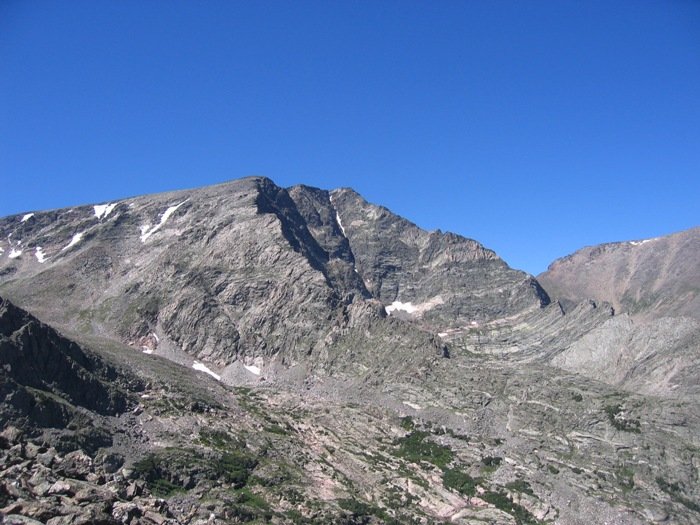 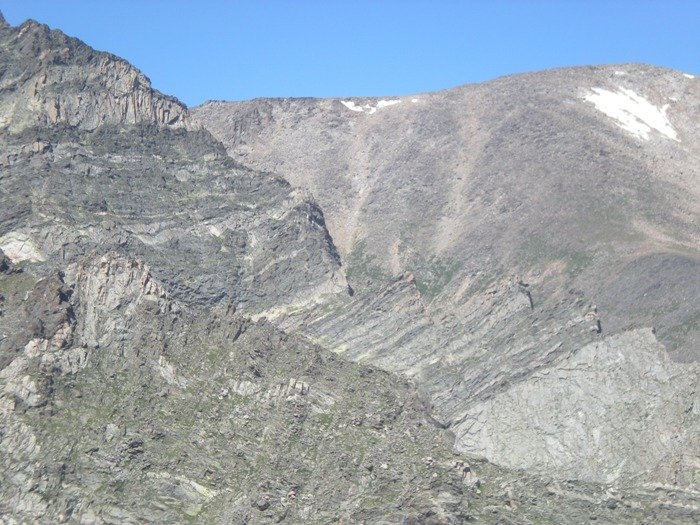 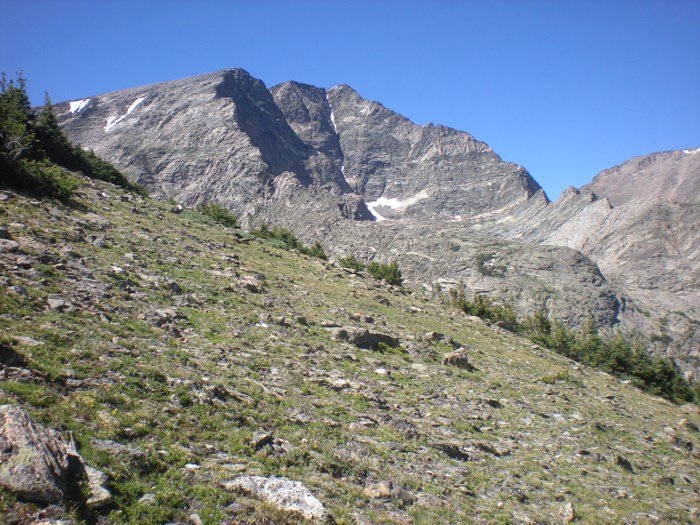 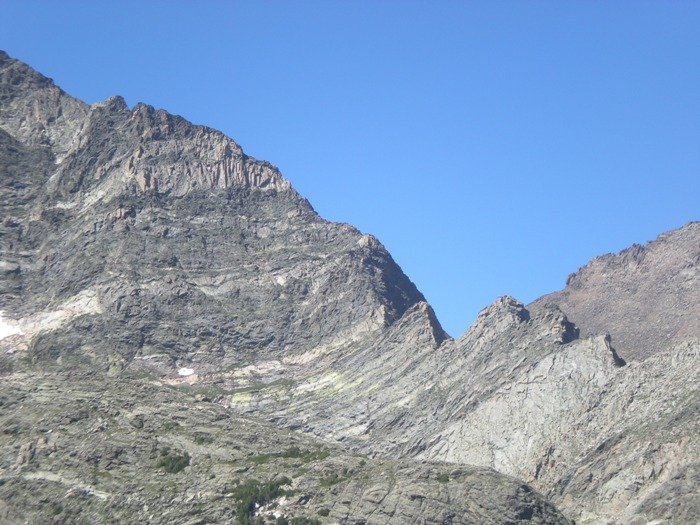