After climbing Rewritten in Eldorado Canyon the day before, Jeff decided that we should check out the Petit Grepon in Rocky Mountain National Park.  I honestly wasn't too keen on the idea, but considering that it was near the middle of August on a Saturday with an amazing forecast, I entertained his request because I didn't think we could even get on the route.  I didn't even bring my camera with on the trip because I assumed we were going for a leisurely Saturday hike up to Sky Pond to watch the trout and other rock climbers ascend the Petit Grepon and the Saber.  Jeff thought we should leave later to get behind the crowds since it will be busy and they may help us a bit with route-finding.  I thought it was a good idea because I could sleep longer, this would put more parties ahead of us reducing my chances of actually having to put on my harness, and late starts are generally never a good thing for an alpine rock route.  I was ready to take the gear for a walk.

We left the Glacier Gorge Trailhead at 6:00 and there were a lot of vehicles in the parking lot.  Hopefully there are four parties queued up at the base of the route by the time we get there.  The approach to The Loch, Lake of Glass, and Sky Pond went quickly and we soon found ourselves nearing the Petit Grepon.  There was only one problem.  We could only see one party on the Petit Grepon, and they were on the Southwest Corner route.  We were shooting for the easier South Face route.  As we continued up to the base of the climb, I finally asked Jeff if he had come to his senses yet.  He laughed as though I was joking.

It was 9:00 when we geared up under unbelievably blue skies and Jeff asked me if I was going to lead the first pitch.  I reminded him that it was the easiest pitch on the route and possibly the only one I could lead.  It was a fairly easy pitch although I found a neat chimney to ascend that I thought was around 5.5.  I got out of the chimney to much easier ground and worked my way to the grassy ledge at the base of the really wide chimney in the center of the face.  At this point I was still fairly certain that we'd get three or four pitches up the route and bail, so I offered to lead the next pitch also.  The second pitch (5.6) is an easy wide chimney that surmounts two large chockstones on the left to a huge cave.  I brought Jeff up and handed him the gear I had left from my lead.

The introduction to the Petit Grepon was over and more difficult climbing starts on pitch 3.  Jeff headed out of the safety of the cave to a left-slanting crack which then goes straight up after about 20'.  It seemed like an off-width crack to me that I used in addition to thin features I found on the face to the left.  Jeff did a good job leading the pitch (5.7) and let out a few grunts in the process.  He assured me the groans didn't reflect the difficulty of the pitch.  It was definitely the stiffest climbing so far, but Jeff felt comfortable on lead, and I still had my wits about me following.  Jeff belayed me from a huge ledge near the base of a smaller chimney after struggling a bit to find good anchor placements.

Since pitch 4 was only 5.6, I volunteered to lead again so I didn't feel totally useless to Jeff on the climb.  The pitch started off easy enough in the chimney, but increased in difficulty as I worked my way up on the face.  I made a few more moves on more vertical rock and reached a right upward sloping ledge after making a somewhat awkward mantle.  I then traversed over to the two fixed pitons at the base of pitch 5 and managed to get two more pieces of gear in to back up the pins and then brought Jeff up to my stance.  The crux pitch was directly above us and we were definitely on route with great weather and Jeff was feeling good.

Jeff opted for the easier unprotected traverse to the right out of the belay.  He got a good piece of gear in before heading up the sustained crux 5.8 section of the pitch.  He clipped a couple of pieces of fixed gear in addition to the two or three pieces he plugged in before pulling the crux with another loud grunt.  From my perspective, speaking as a novice climber on top rope, the crux actually wasn't too bad until the very top.  The unprotected traverse to the right out of belay was scary but more mental and you simply have to trust your feet.  After you traverse back to the left and get into the wide double crack, you just have to slowly work your feet and hands up and the holds seem to be there.  The difficult section for me was when I worked up to the featureless round blob rock with a thin finger crack on the left and small hold on right.  I got my left foot up to a good placement, but standing up on it and committing to the better hand placements higher above was difficult for me and I could see the potential for a fall.  Once I got my hands on the jugs above, I smeared my feet so I could reach even better hand holds and then it was over.  After this is was super easy terrain to a nice ledge for another non-hanging belay.  Nice lead Jeff.

With the crux pitch behind us, our confidence improved about our chances of success, but we remained in check and didn't get too excited at this point.  My spirits had even lifted and I was starting to feel good about the day.  I checked my blood sugar level, we ate and drank, and then we watched a party on the Saber for a short time.  Jeff asked me why I didn't tell him that I had rented out the Petit Grepon for the day.  We were both very surprised that we was only one other party on the route in such perfect conditions.  We read the route description from Mountain Project and the next three pitches were 5.7, 5.7 and 5.6/5.7.  Jeff was feeling good, so off he went.  We had a little confusion on the next two pitches, but stayed fairly close to the arête of the Petit Grepon on the east side.  Pitch 6 ended up being a fairly long pitch for Jeff and then pitch 7 was really short.  I'm fairly certain we missed the Pizza Pan belay and set up an anchor above it which is why pitch 6 was long and pitch 7 was so short.  Jeff led the short pitch 7 and belayed me from an extremely exposed ledge directly on the south arête.  At this point, we caught up to the party coming up the Southwest Corner route.  The climbing certainly wasn't as hard as the crux, but it was vertical and exposed.

Jeff had led pitches 3, 5, 6, and 7, so my strong start on pitches 1, 2, and 4 had definitely weakened.  Not only did Jeff lead more pitches than me, he climbed all the difficult ones.  I didn't want my man card revoked, so I geared up and decided to give the summit pitch a go.  The first 40' out of the belay were the hardest and after leading the pitch, I can understand the unusual 5.6/5.7 rating that is noted online.  The line starts out on a nice hand crack with a fixed nut buried deep which was actually hard to clip.  After working up the crack, you reach a rest ledge before heading up and to the right on more sustained and exposed vertical face climbing.  The difficulty eases to 5.5/5.6 after the first half of the pitch and you start to climb more closely to the actual arête or ridge crest which I peered over on occasion.  I finished the pitch and pulled over a large block to the small pinnacle summit of the Petit Grepon.  Jeff joined me where we congratulated each other and warmed ourselves in the sun.

The descent instructions we had were spot on, and we reached the ground after six relatively uneventful rappels from bolted anchors at each station.  We left our packs at the base of the climb and had the follower carry a small summit pack with our food, water, tag line and extra clothes.  We were happy with our success and still couldn't believe that no one else was on the route the entire day.  We packed up our gear after retrieving our packs and made the generally painless hike back to the Glacier Gorge Trailhead.  We ended up completing the climb in 14 hours car-to-car.  We drove into Estes Park for dinner and a beer at Smokin' Dave's Barbecue.  The day had finally caught up to us, and we were very tired but very satisfied with the climb. 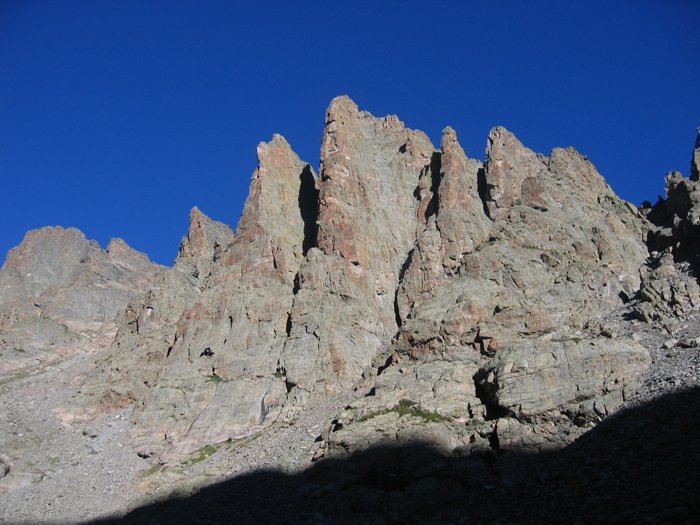 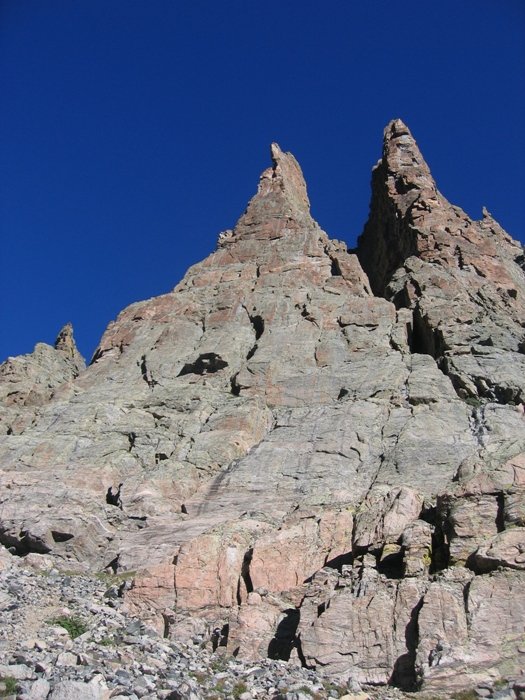 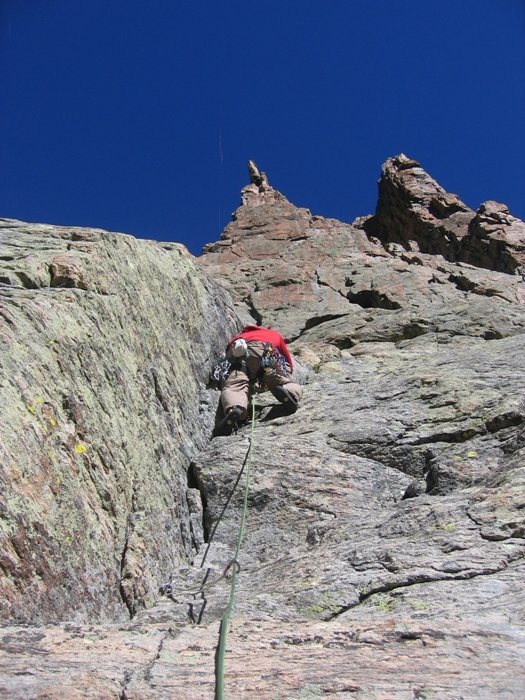 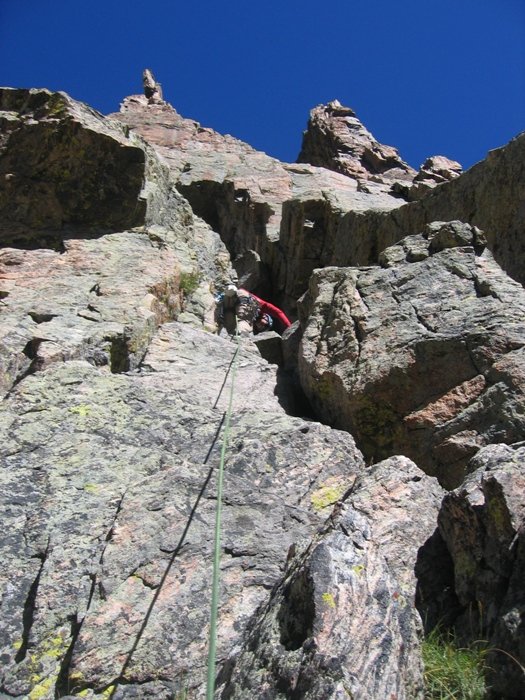 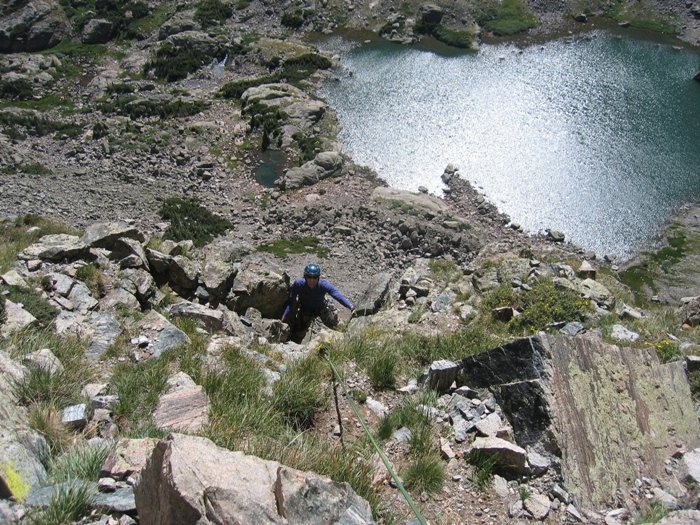 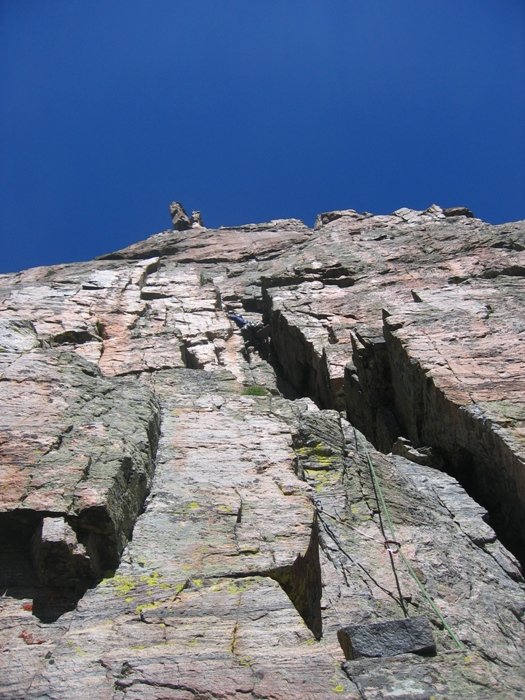 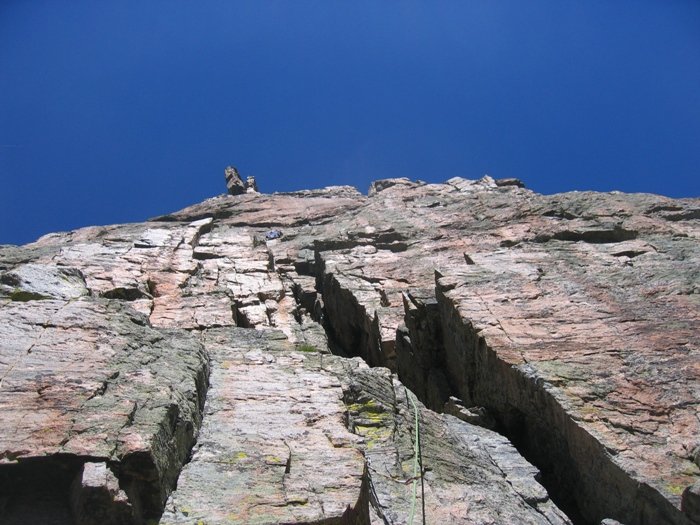 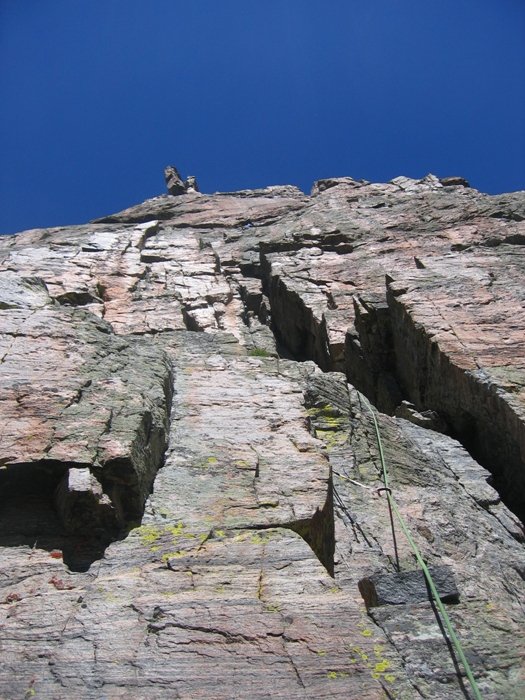 James at the top of pitch 4. 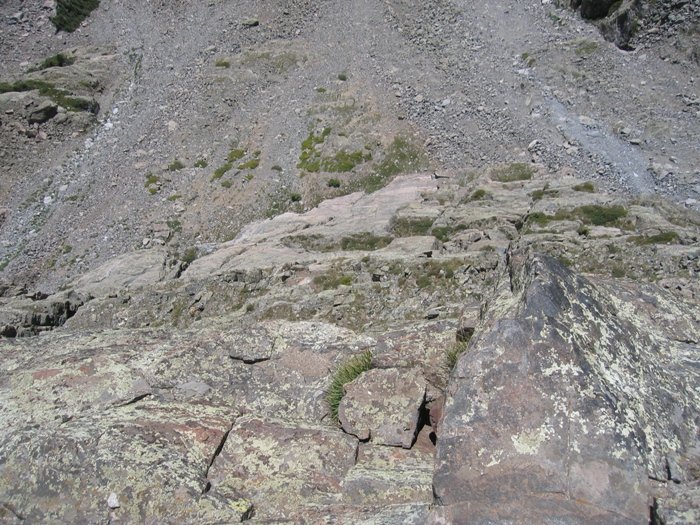 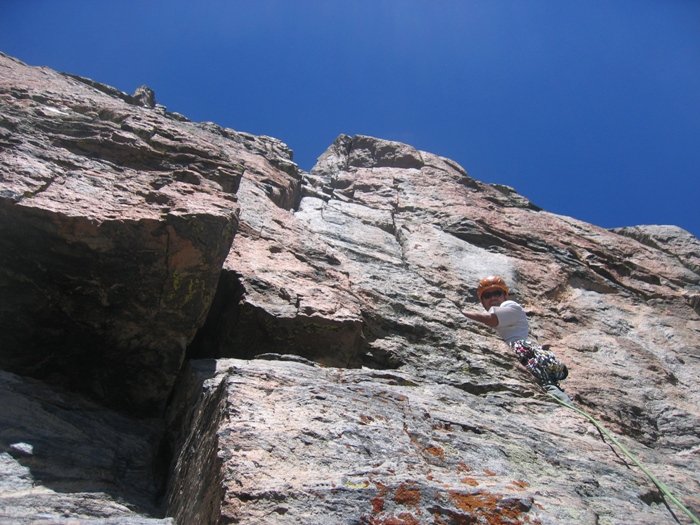 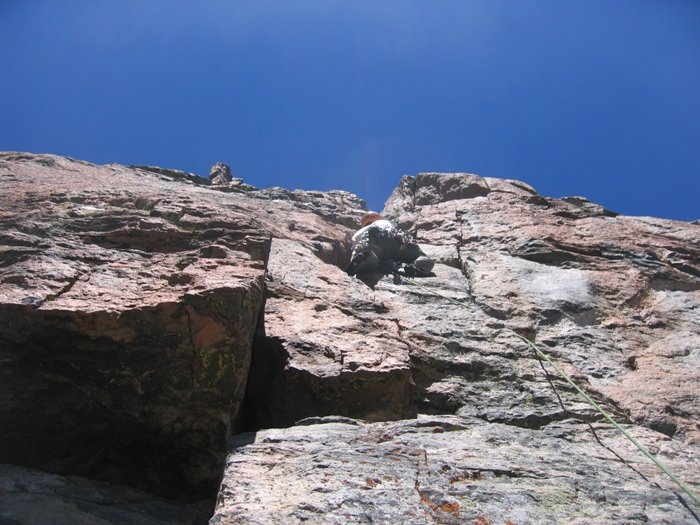 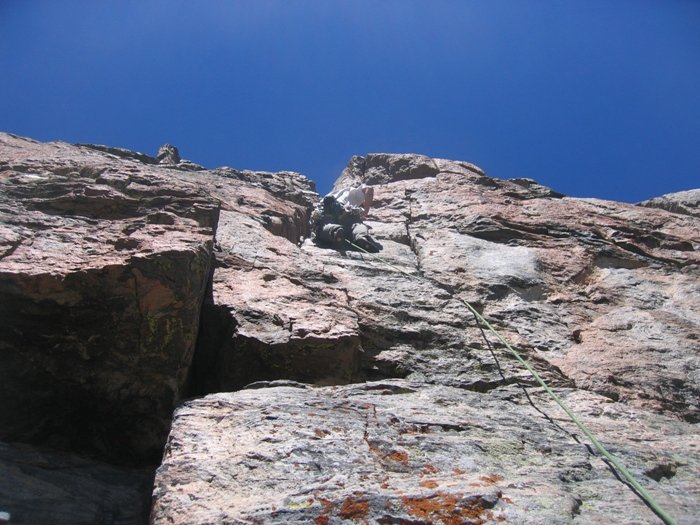 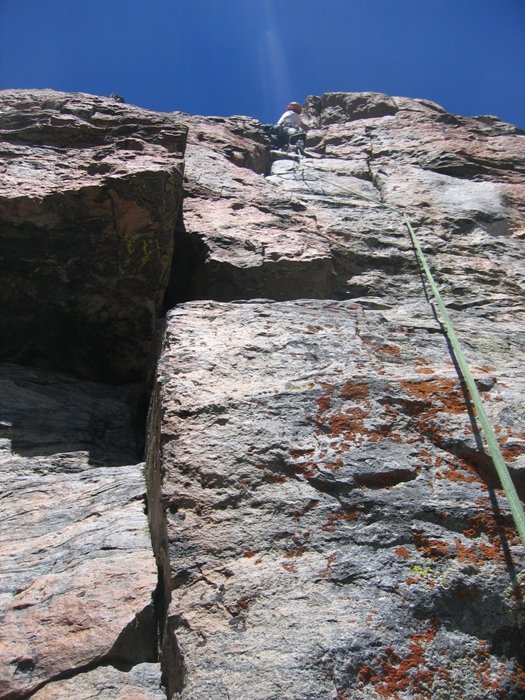 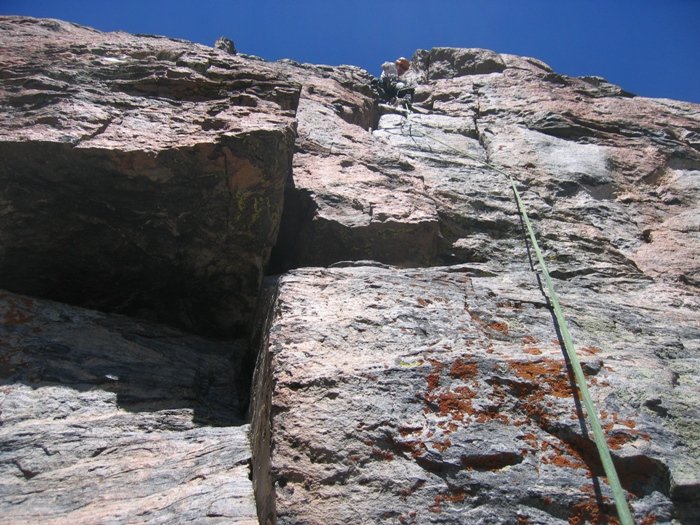 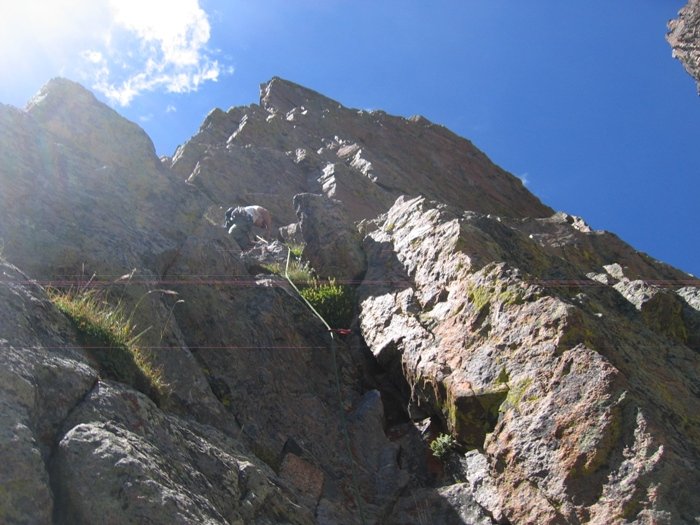 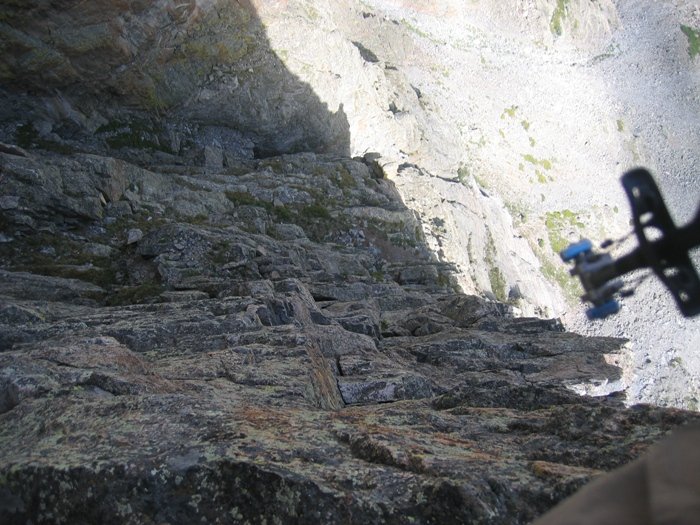 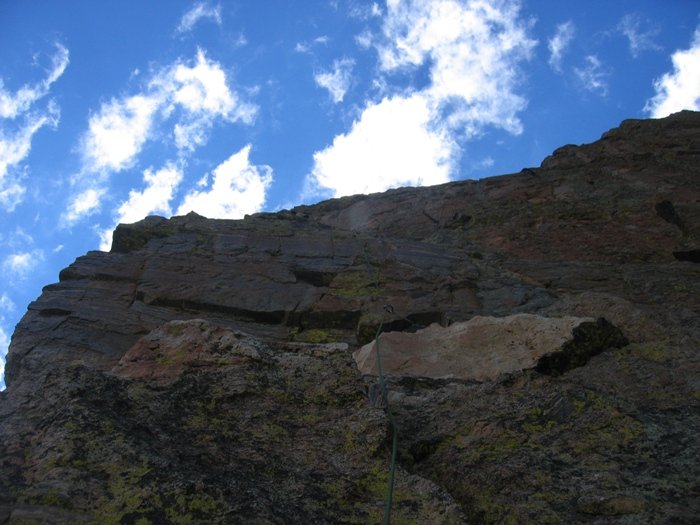 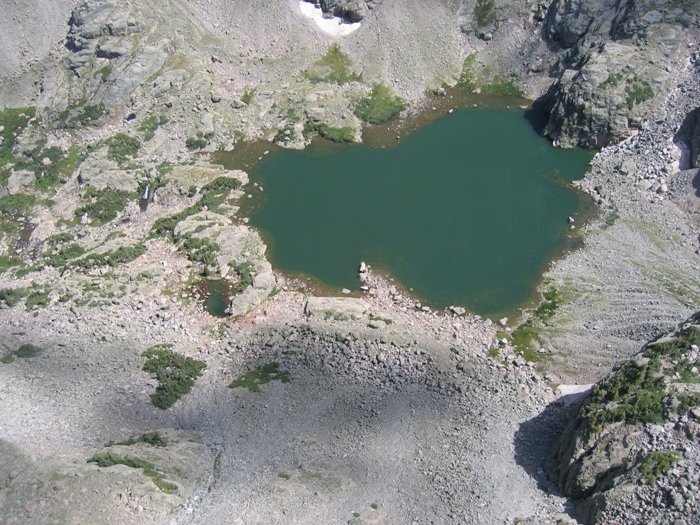 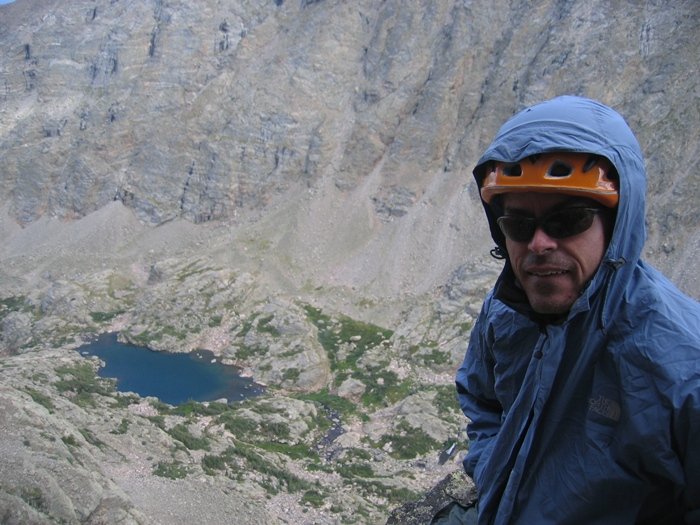 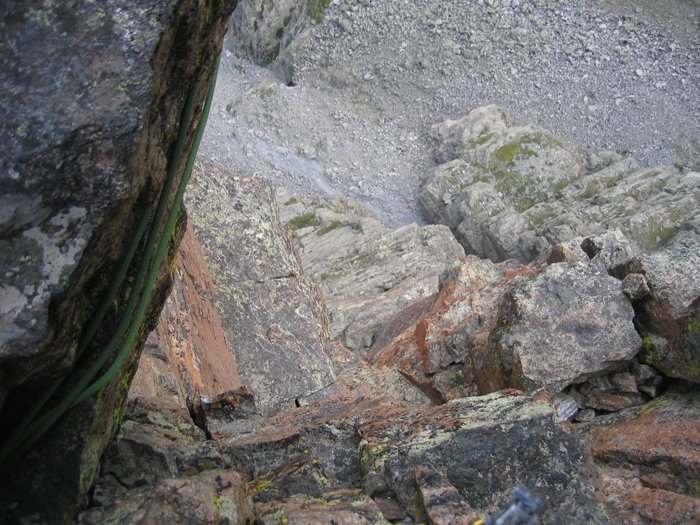 Looking down the west side of the Petit Grepon. 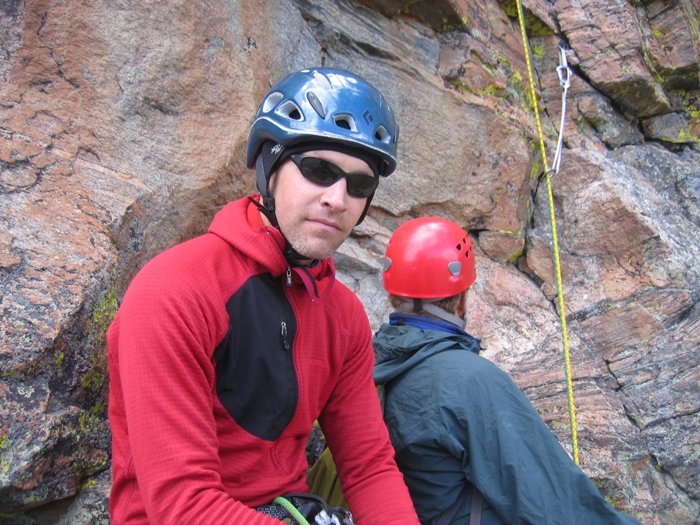 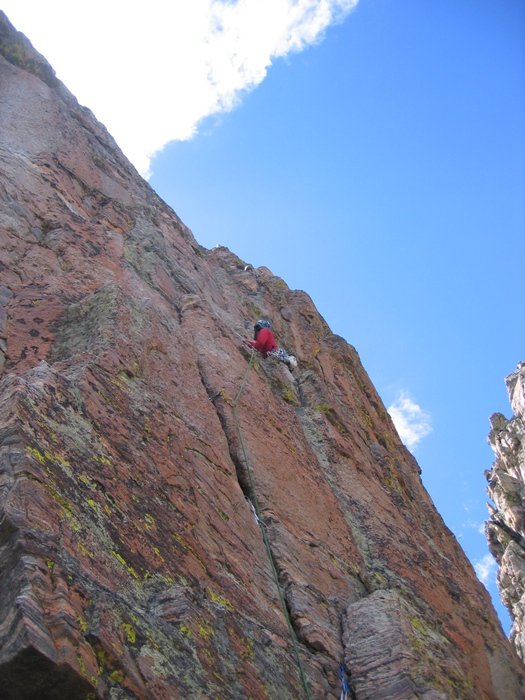 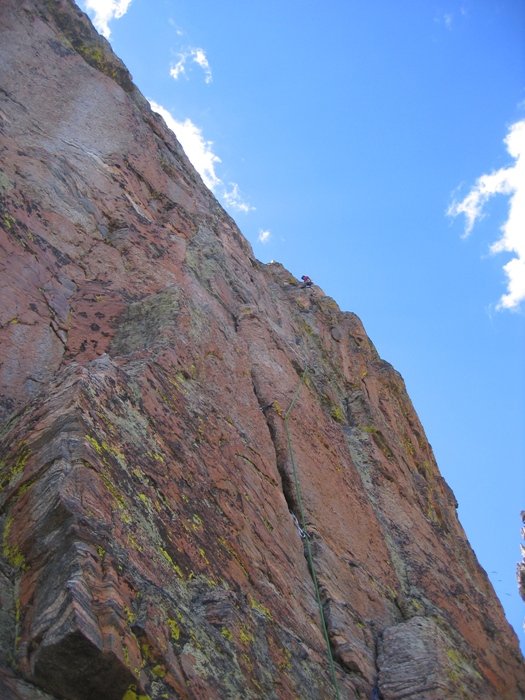 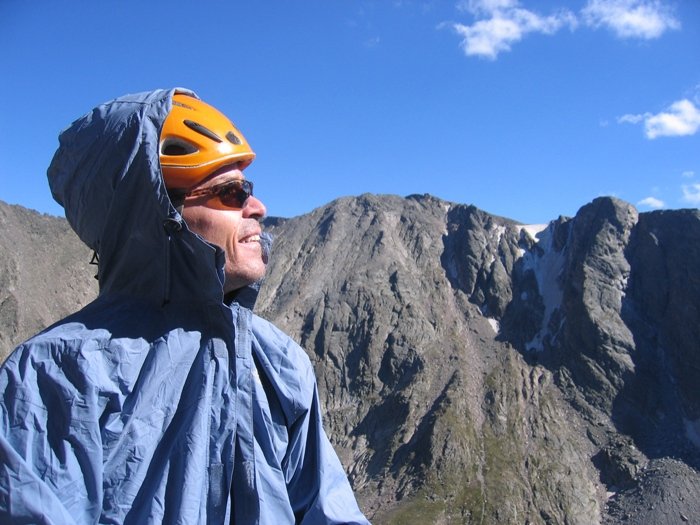 Jeff on the top of the Petit Grepon. 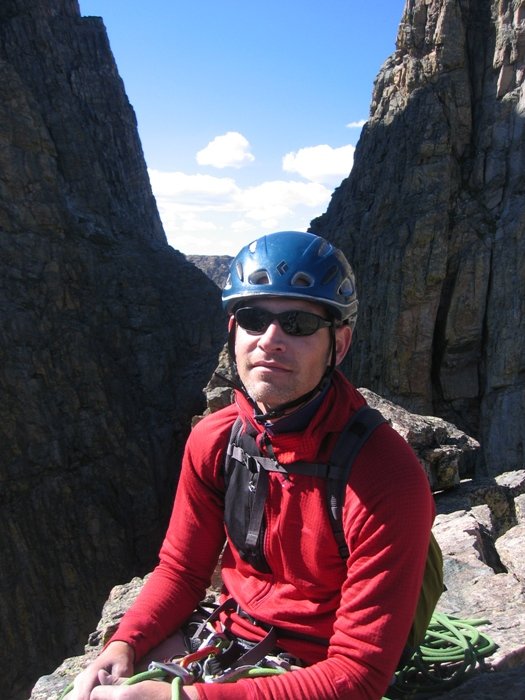 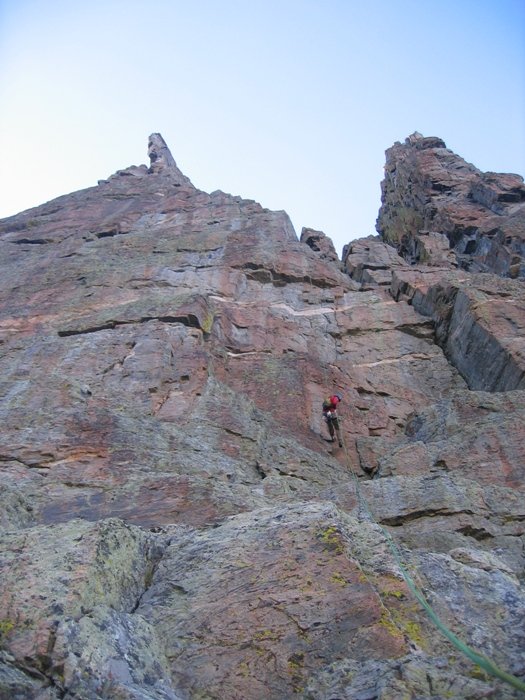 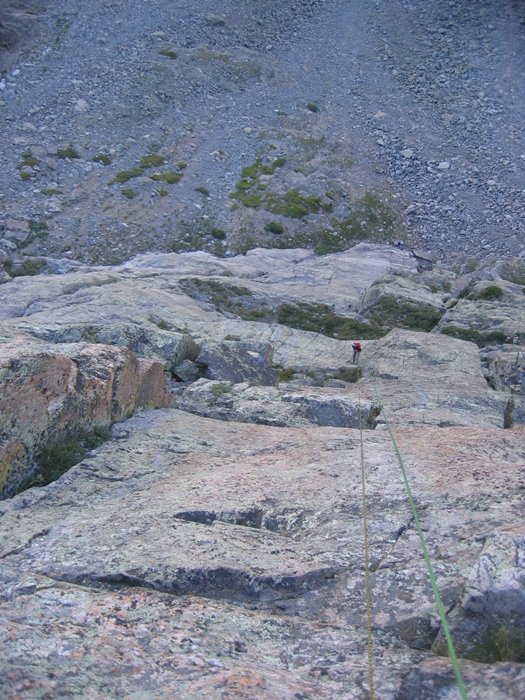 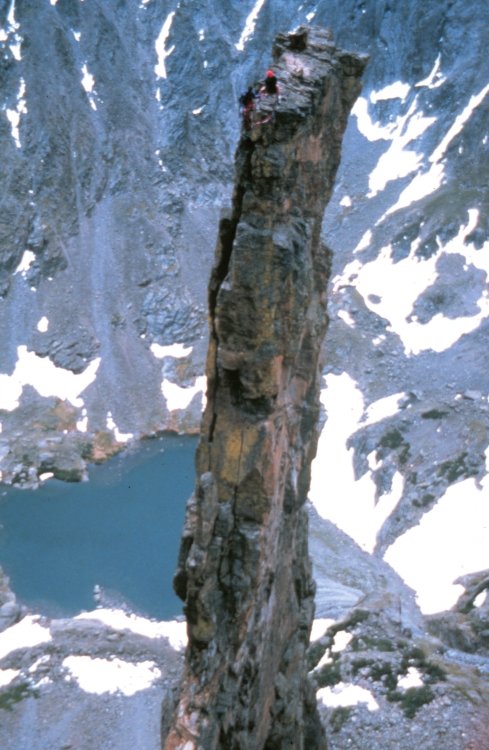 The Petit Grepon from the north.