Jeff and I left the Bear Lake Trailhead at 4:30 and made quick work of the approach to Notchtop Mountain in our attempt of the Spiral Route.  We hiked past Lake Helene and scrambled up to the west face of the mountain.  We decided to add two easy pitches of climbing to the standard route and start lower down on the climb.  I started out under dark skies and climbed up mostly easy forth and fifth class terrain with one short 20 foot section that maybe increased to 5.5.  Rope drag became and issue, so I stopped and Jeff finished the lower section of climbing on 5.5 to 5.6 terrain.  He was able to cross over to the start of the standard route and tie in the first pitch which felt 5.5.

As we looked for the next pitch that would lead us to the east meadows on the Spiral Route, Jeff spotted a fixed nut in the wall above us and encouraged me to give it a go.  I reached a good stance, clipped the nut, and was then stuck.  The rock above me was not vertical, but the holds were thin in comparison to what we had just climbed.  I finally gained the courage to make a couple of thin moves and reached another good stance.  I placed a couple of pieces of gear, continued up an easier crack, placed one more piece and quickly reached the meadows.  Jeff followed and when we reconvened, we both felt there were a couple of solid 5.7 moves below.

We coiled the rope and scrambled around the hanging meadows to the headwall below the notch.  In keeping with our theme of making things interesting, Jeff led the right side named Mornin' which is rated 5.7.  This was a very fun and sustained 5.6/5.7 pitch that made the route for us.  We both agreed that this line was definitely longer and more sustained.  We scrambled to the summit spire of Notchtop Mountain and then the crux of the day began.

Rappelling off the west face of the mountain in windy conditions proved to be relatively difficult and took much longer than expected.  We used the rope we climbed with and a 60 meter tagline.  On the first rappel off the summit, I overshot the first set of bolts and had to re-climb about 40 feet of class 4 terrain using a self belay technique.  Jeff got down to me easily and started down the second rappel and found the next set of bolts easily.  I reached him and then found the third set of bolts easily too.  However, when we tried to pull the rope for our fourth and final rappel it got stuck.  Jeff ended up reclimbing quite a ways back up the pitch on 5.7 terrain with a prusik around our two rappel strands that were still through the anchor.  After freeing our rope, he rapped down to me and we did the last rappel to grassy slopes below.

We scrambled down to our packs at the base of the early pitches we did and were hiking out in no time.  The hike out went quickly, but the day took longer than I expected with the difficulties we had on rappel.  It ended up being a 10.5 hour day car-to-car.  I'm not so sure traversing and down-climbing the gully wouldn't have been quicker on a windy day like we had.  Although not a terribly difficult route, it was within my abilities and I felt comfortable on the entire climb.  Jeff had climbed the route with a guide several years ago and was glad to return and do it independently. 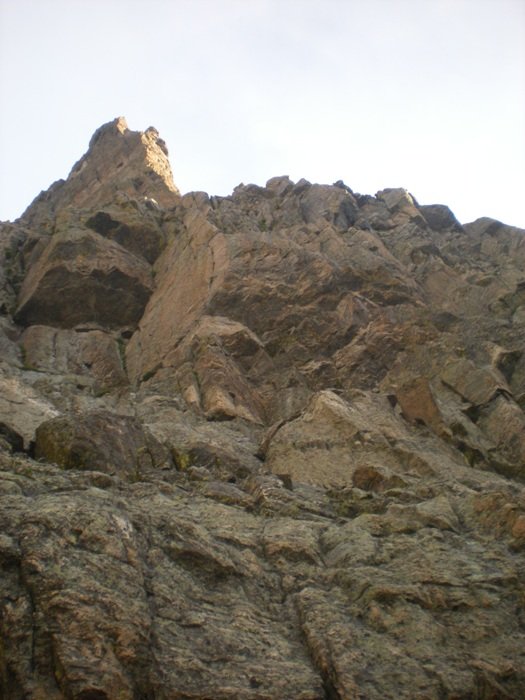 Miscellaneous pitches we climbed to get to the route. 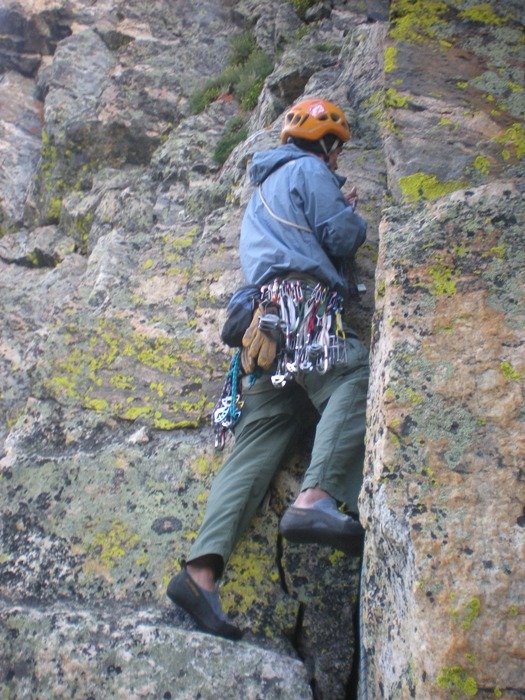 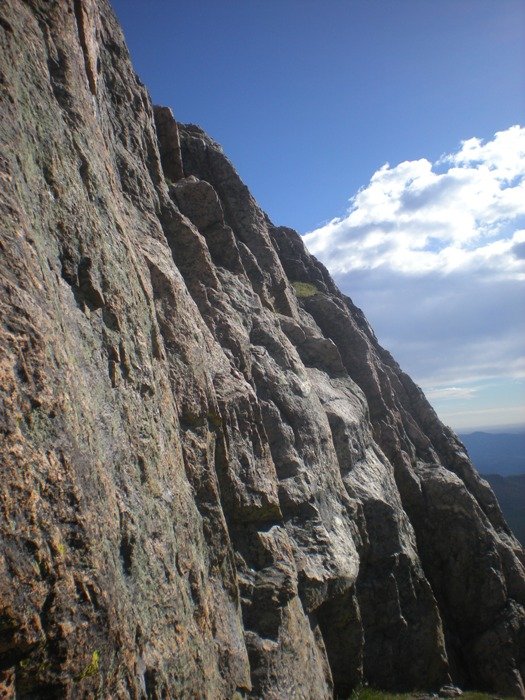 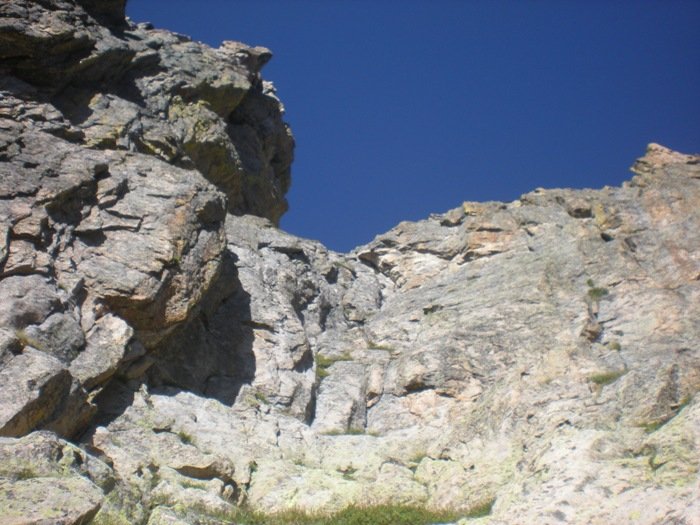 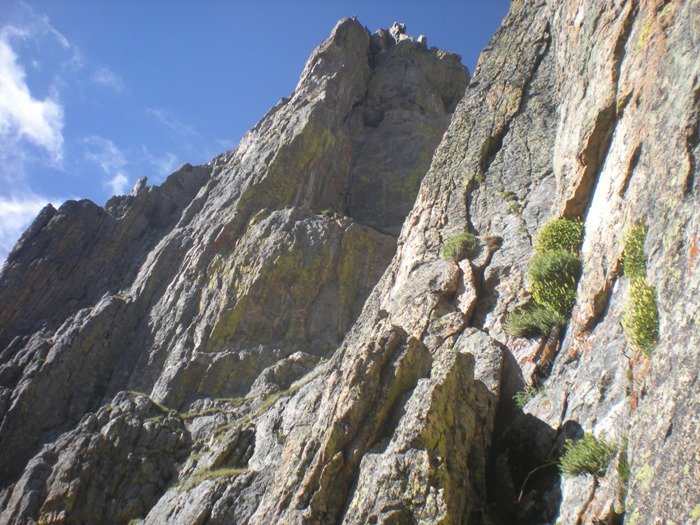 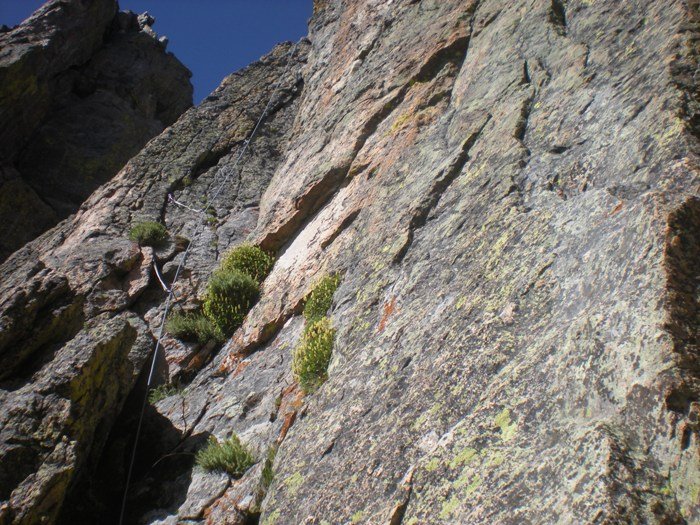 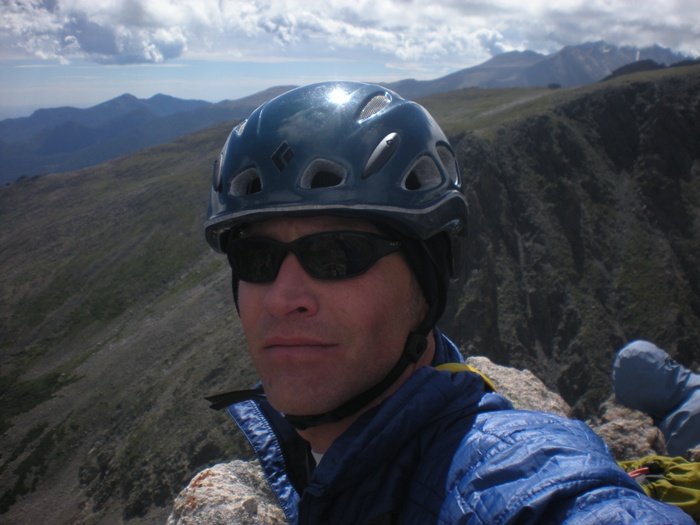 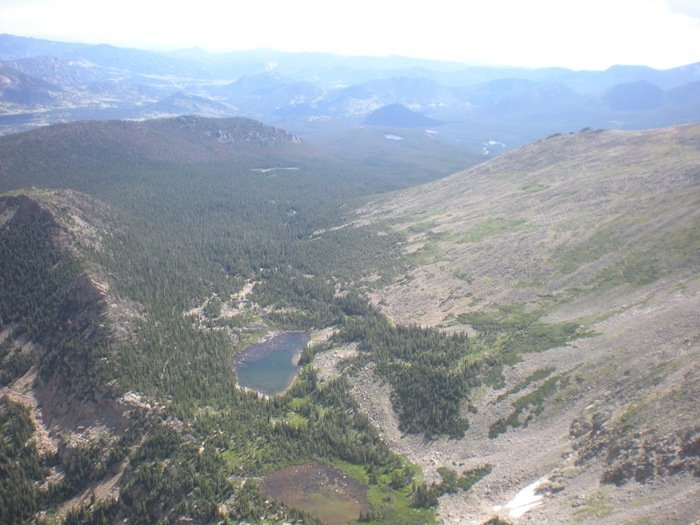 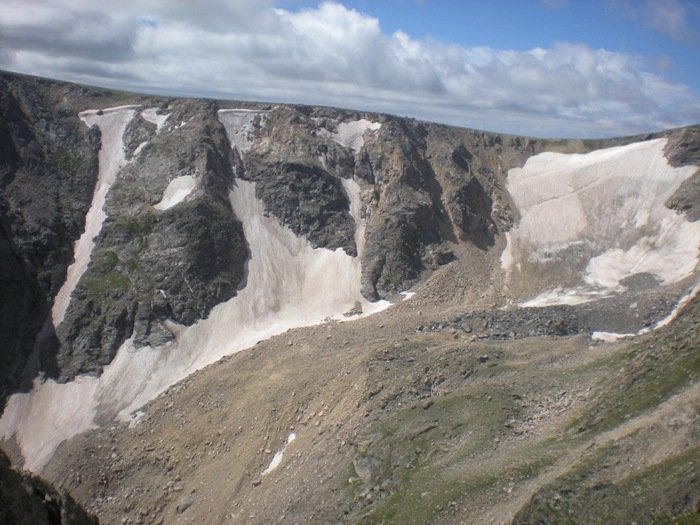 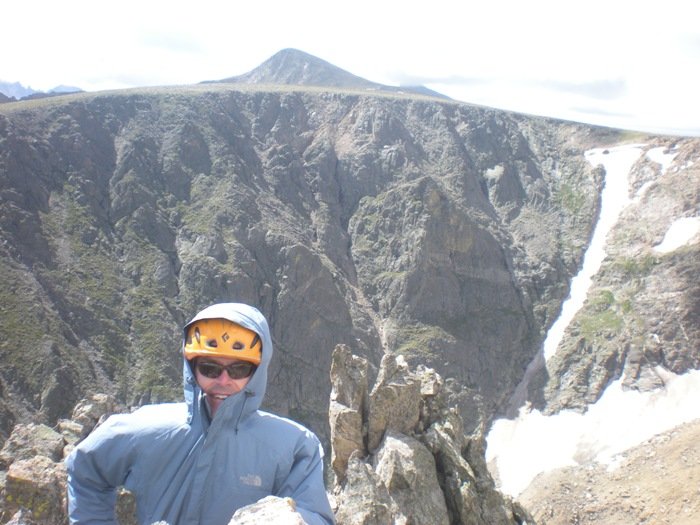 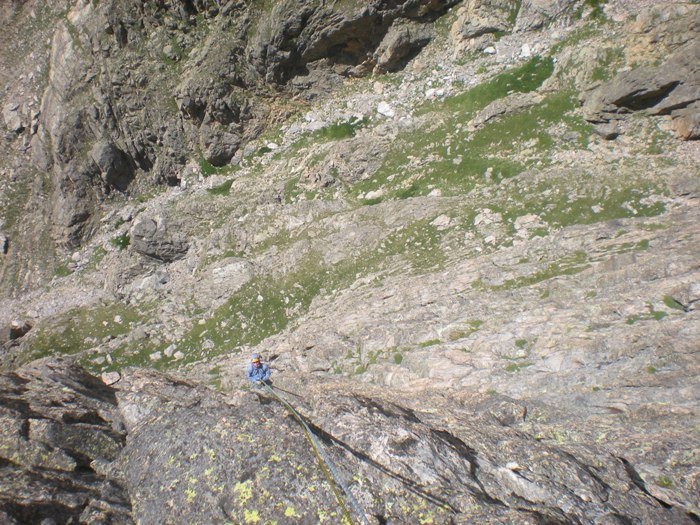 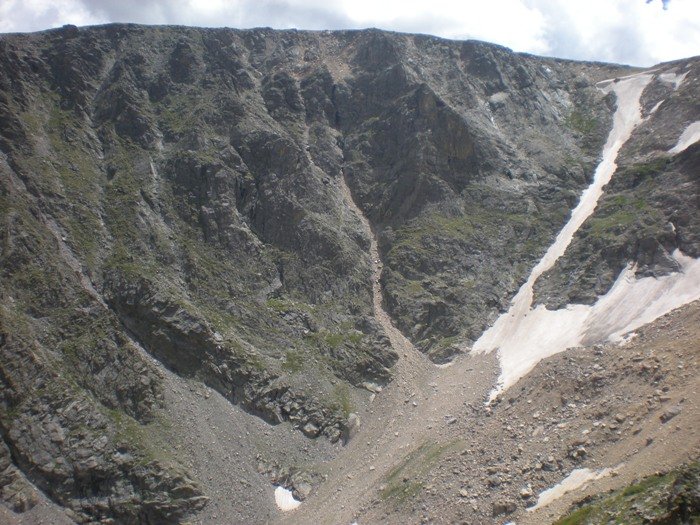 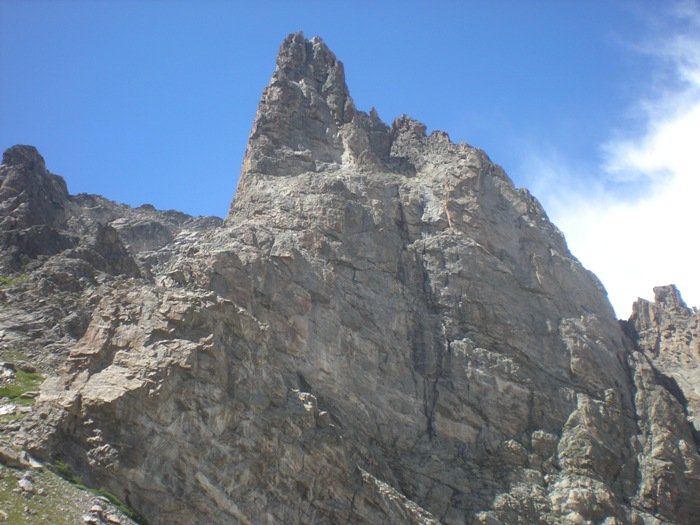 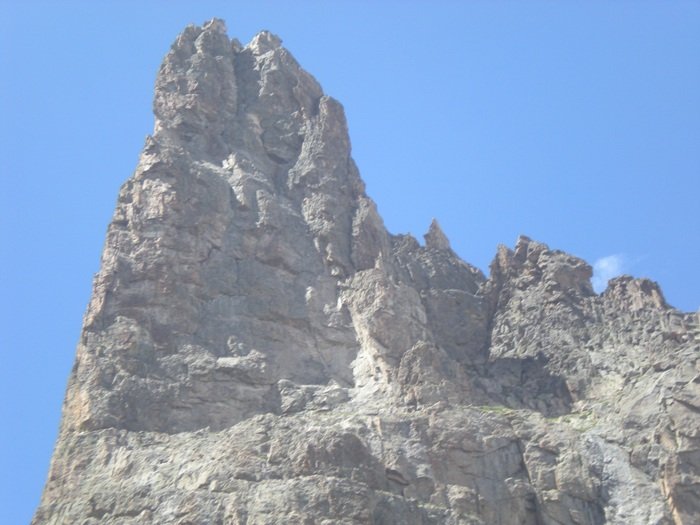 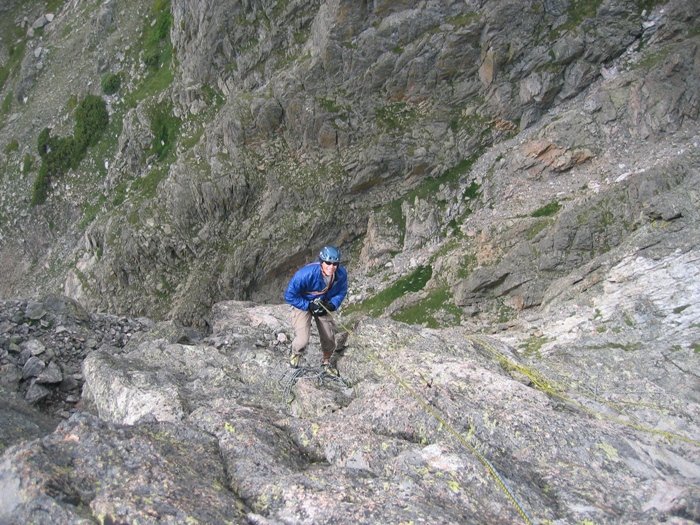