Jeff, Greg, and Alan allowed me to tag along on their winter attempt of Mount Antero in the Sawatch Range.  We left the Denver metro area around 4:00 and were hiking from the two-wheel-drive trailhead at 6:40.  We wore snowshoes from the trailhead to within approximately 1,500' of the summit where the terrain became loose talus with moderate snow coverage.  We opted for a nonstandard route which was a slight variation of the one I did in April 2006.

The snowshoeing on the road was relatively easy with a ski track ahead of us to help with floatation.  Once we reached the junction for Baldwin Gulch, the going got much slower.  We took turns breaking trail in the snow which ranged from 6 to 18 inches.  I had difficulty all day keeping my feet warm and luckily Greg had some warmers I used, otherwise I'm certain I would have had to turn around.  As we approached tree line where the road makes a slight turn southwest, we started directly up the west gully north of the switch-backing road above us.  Instead of continuing up the gully and turning right to the saddle south of Mount Antero as I did four years ago, Greg led us left to the west rib of Mount Antero.

Once the snow coverage became less, we dropped our snowshoes and began a somewhat annoying ascent up loose, snow-filled talus.  We all picked our line sometimes following each other and sometimes veering slightly left or right.  The day was starting to wear on me and I continually had to remind myself to take small steps and deep breaths.  In talking on the ride home, everyone stated the altitude, cold weather, distance, and elevation gain was challenging.  We topped out after six hours and quickly started working our way back down the annoying talus slope to our snowshoes.

After we got back to our snowshoes, we hydrated and refueled for the long hike out.  Jeff and I turned on our iPods for some extra motivation on the descent.  Fortunately, we had already put in a solid track and it was all downhill.  We all kept a pretty fast pace on the way out and completed the climb in nine hours car-to-car.  It was a good effort with a strong team. 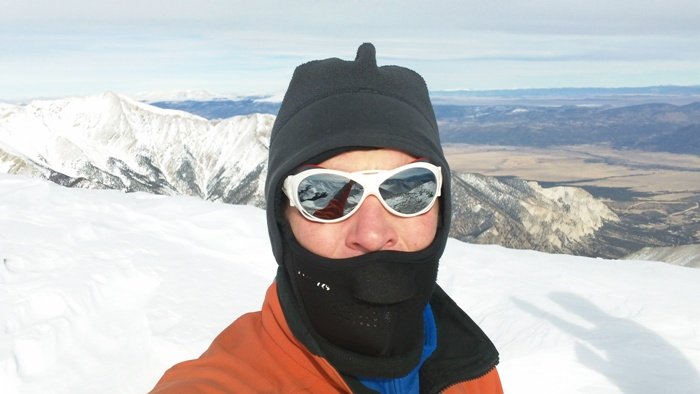