We had originally planned on climbing a day or two down by Eureka, Colorado, on some multi-pitch ice to escape the Ouray Ice Park.  Unfortunately, Red Mountain Pass was closed for our entire trip down, so Bob, Brian, John, and Kevin took off for Telluride, Colorado, early Sunday morning to ski.  Since we couldn't go to Eureka, Colorado, Jeff and I took the opportunity to climb Dexter Creek Slabs outside of town.  The route was in different shape than last year, but we persevered and completed the climb.

The approach was difficult as there was 8 to 12 inches of fresh snow to deal with.  It wasn't a nice boot pack like last year.  It took us longer, but we finally made it to the base of pitch one.  Jeff led the short pitch 1 (WI3) to a tree anchor.  The next section of the route was a snow climb last year, but I didn't feel comfortable free climbing it this year because it was a long stretch of WI2 under a new deep layer of snow.  You couldn't see your placements or feet very well.  I led this section clearing as much snow as possible and getting a couple of screws in to get us to the base of the steeper ice using an ice screw anchor to bring Jeff up on.  Jeff led this good ice pitch (WI3+) which ended up being a fairly steep section for us.  He got several screws in and when he yelled down that he was passing an old V-thread, I told him to clip it.  He finished the pitch and brought me up on a tree anchor.

I followed the pitch miserably.  My technique was bad, my footwork was worse, and I had the screaming' barfies when I got to the top.  I was beginning to think I drank too much the night before.  Once again, the next section was a snow climb last year, but this year it was WI2 covered in snow which made it harder than it should have been.  I knew I couldn't reach the top of the ice in one rope length, so I built an anchor about half way up when the difficulty increased to WI3.  When Jeff got up to my anchor, I realized that I had left my V-thread chord and hooker in my pack at the base of the last pitch.  We could have easily lowered off my ice screw anchor, retrieved the necessary gear, and resumed climbing, but I decided to test my mountain skills.

I connected my V-thread hole on the first shot and blew the excess ice out of the ice.  I cut off an appropriate length from his anchoring chord for a V-thread using the top of his ice tool pick.  I put a sling into one of the holes, inserted the chord in the other hole and through the sling, and then pulled on the sewn sling to get the cord through the V-thread.  It took me about eight tries to get the chord through the V-thread without a hooker, but it finally worked and I tied a double fisherman's knot to finish our V-thread.

I felt a little redeemed from my previous bad climbing and was ready to finish the route.  Jeff allowed me to finish the climb which was WI3/WI3+.  I felt much better physically and mentally on this portion of the climb and brought Jeff up on a tree anchor.  Similar to when I followed Jeff's harder pitch, now Jeff had cold hands as he finished off the climb.  We rappelled off the tree back to the V-thread I built setting off a fairly sizable slough.  We then rappelled off my V-thread back to our packs at the base of the start of the harder climbing.  We used an existing V-thread to rappel back to the tree above pitch 1, and then rappelled off the tree to get back to the base of the climb. 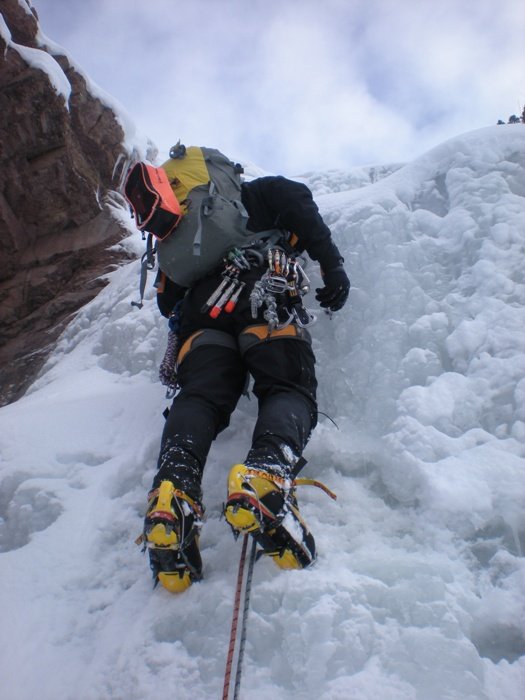 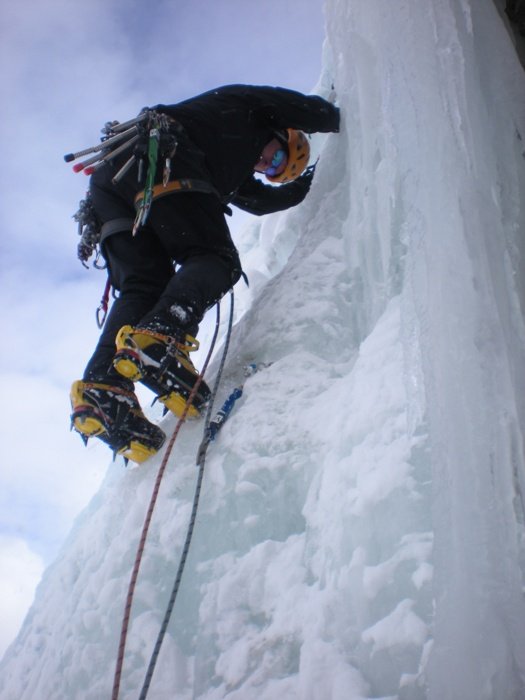 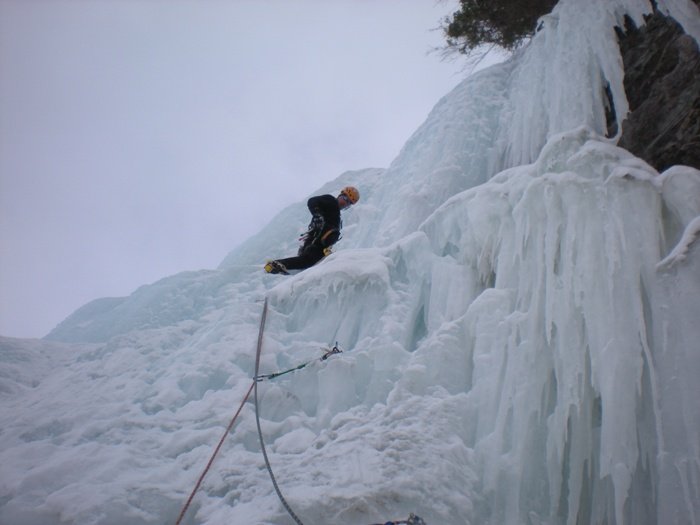 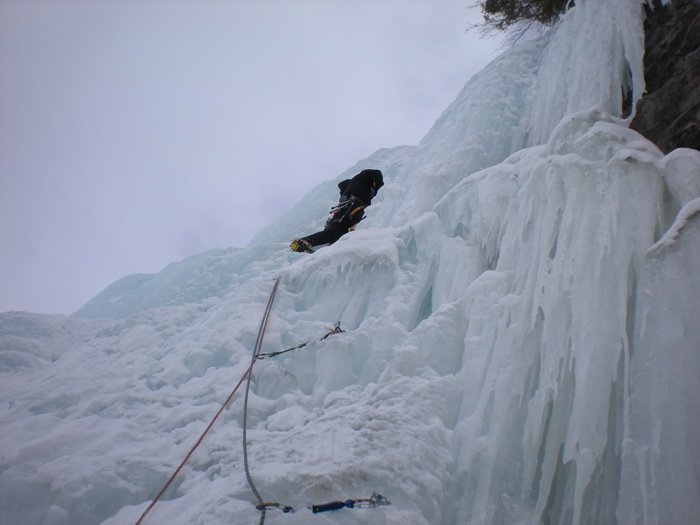 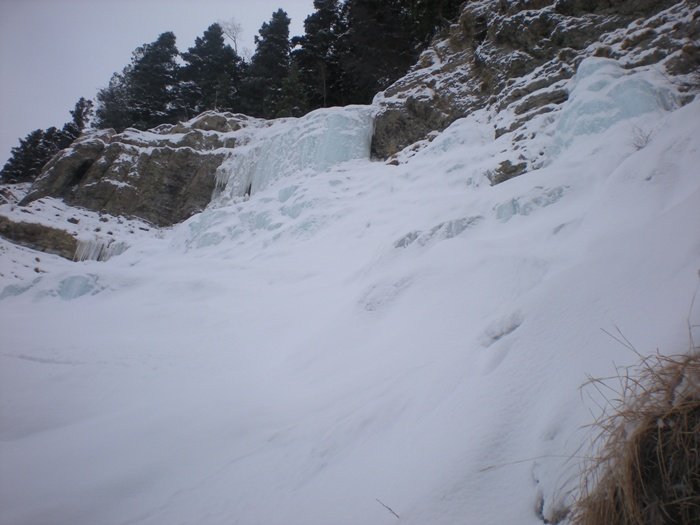 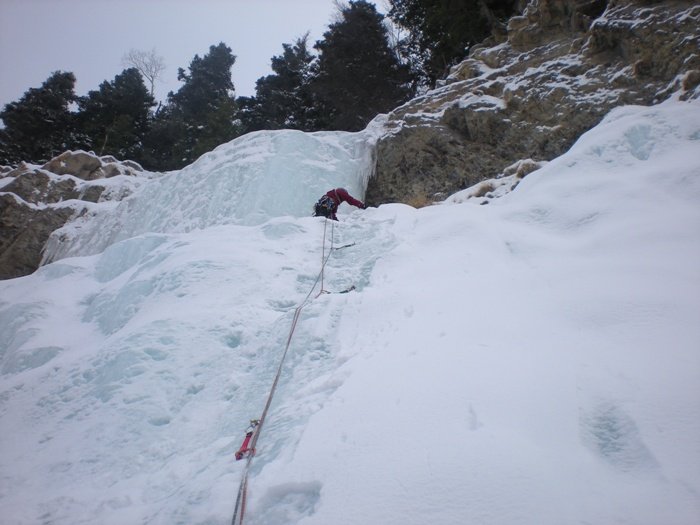 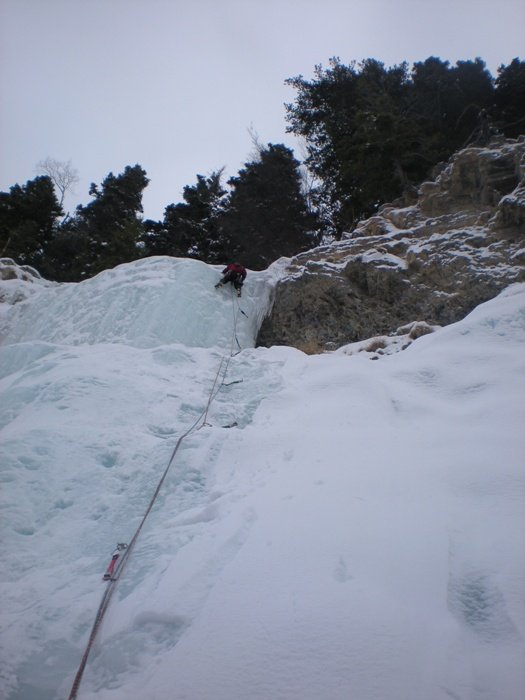 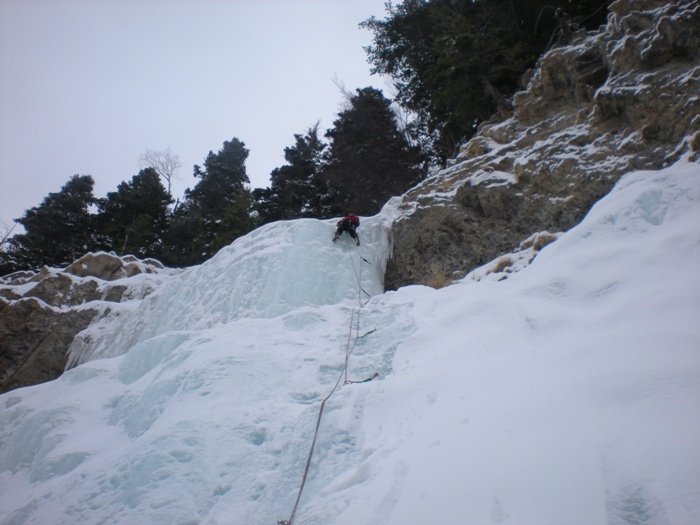 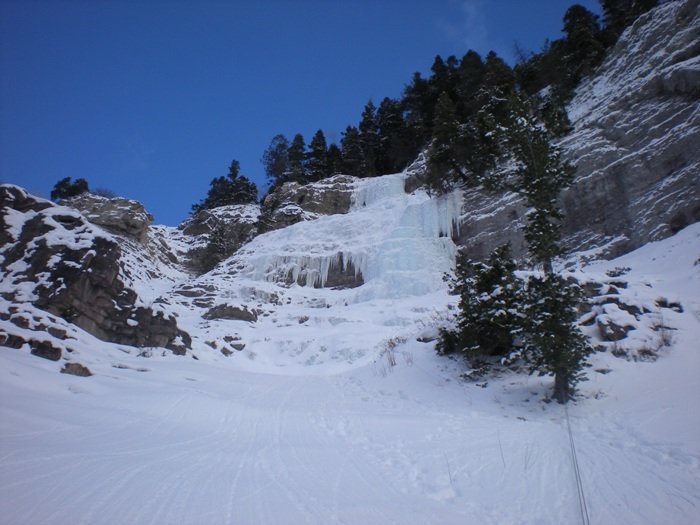 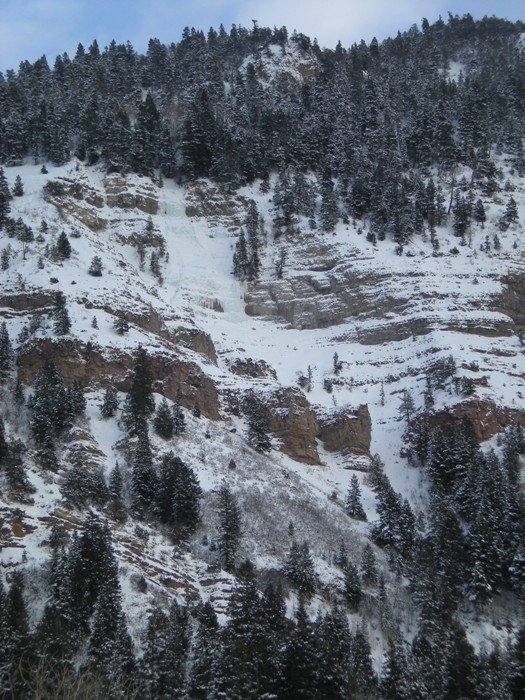