Jeff and I left Highlands Ranch, Colorado, at 3:45 heading back to Rocky Mountain National Park and Glacier Gorge.  We had just been in this area a month ago for our hike of Longs Peak via the Trough Couloir.  Recent information on the West Gully from a couple of friends indicated that the ice was crummy, the rock was wet, and the avalanche potential was high, which didn't sound promising.  The forecast for the day made it seem as though it was May 21st instead of March 21st.  I wanted to get at least one more ice climb in before hanging up the tools for the season and moving on to snow and rock climbing and hiking season.

We made it to Black Lake in 1 hour and 50 minutes for our first glimpse of the route.  As expected, the first easy WI2 section of the first pitch was snow covered and the middle pitch looked thin and manky.  We geared up on the snow slope leading to the route seeing enough ice to complete the climb.  The sun hit us just before I started up the pitch and I fortunately decided to shed a layer before beginning up.  The ice conditions weren't perfect, but they weren't terrible either.  I got to the base of the short steeper section of the climb where the second pitch usually starts and Jeff indicated that I still had a fair amount of rope left.  I cleared the short crux and worked my way up some easy mixed climbing below the base of the enduro slab upper pitch.  I didn't have enough rope to reach the ice at the slab, so I built an anchor and brought Jeff up.

Jeff moved the anchor to the base of the final slab pitch as I peeled another layer, changed sun glasses, and applied sun screen.  After joining Jeff, we swapped gear for the final pitch and I headed up.  After about 30 feet on the slab, my calves were burning and I was more tired than on the first pitch.  About two-thirds up the pitch, I clipped into a sixteen cm screw that someone forgot or bailed on and took a short rest.  I was running out of ice and rope and built a quick anchor to bring Jeff up on.  After reaching me, he climbed the remaining 25 feet of ice and gave me a hip belay in the snow to the top of the route.

We quickly found the rappel station and were back on the snow slope to the right of the enduro slab.  There was a short section of steep snow down-climbing before we started traversing climbers right.  Before long, we were back at Black Lake soaking up the sun.  We enjoyed the warmth and packed our gear while eating and hydrating for the hike out.  Despite the beautiful weather, we saw only one person heading toward the Trough until we got back to Mills Lake.  The hike out went quickly as we each listened to our iPods and said hello to people on the trail.  Our car to car time was 7 hours and 45 minutes. 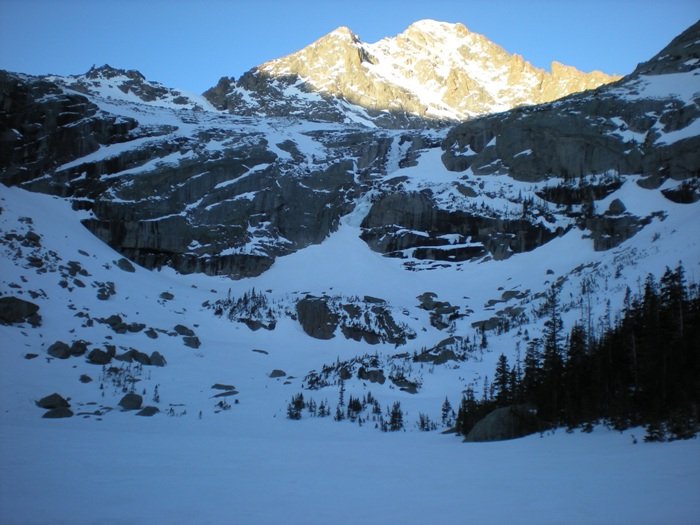 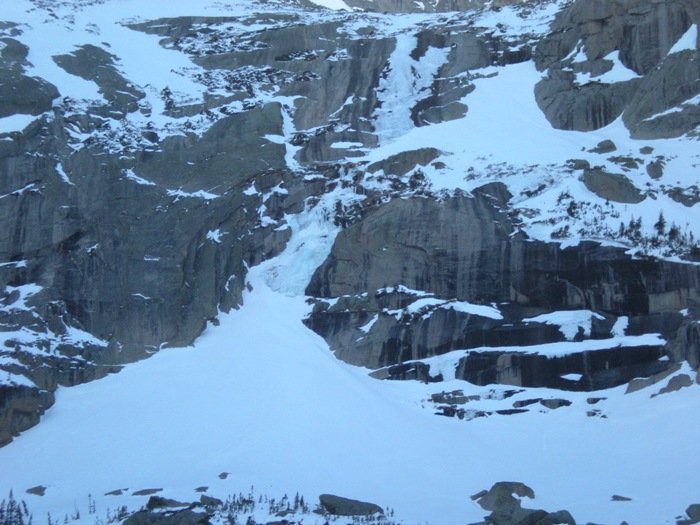 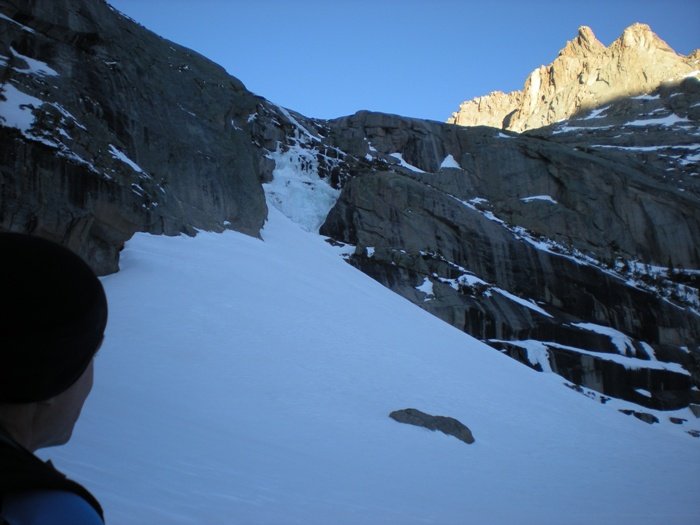 West Gully from the apron of the climb. 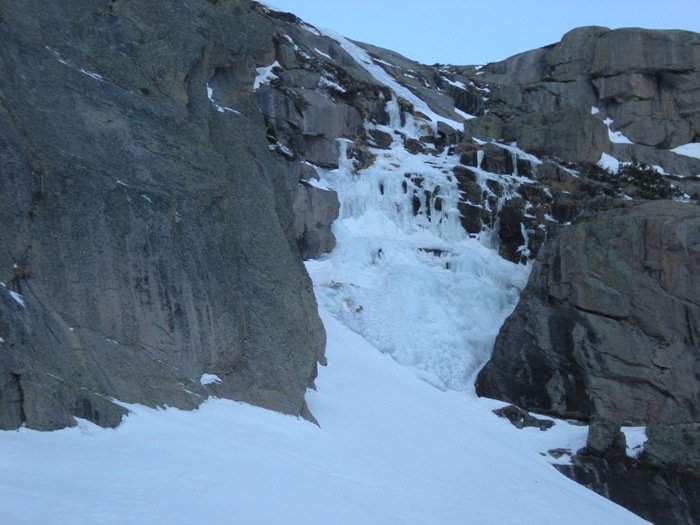 Nearing the base of the ice. 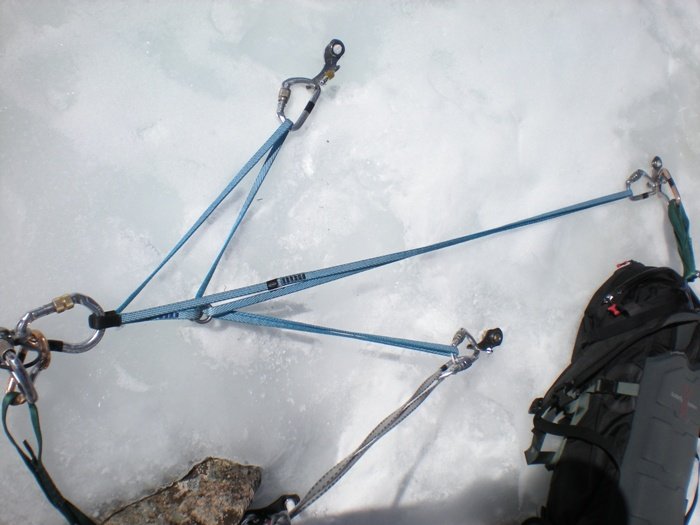 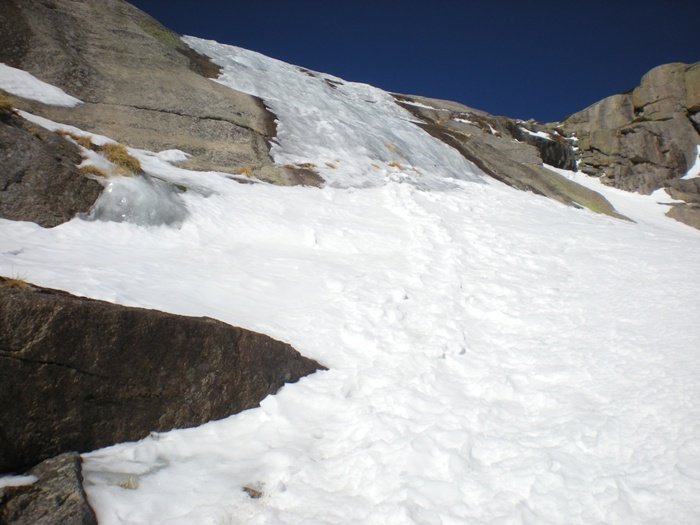 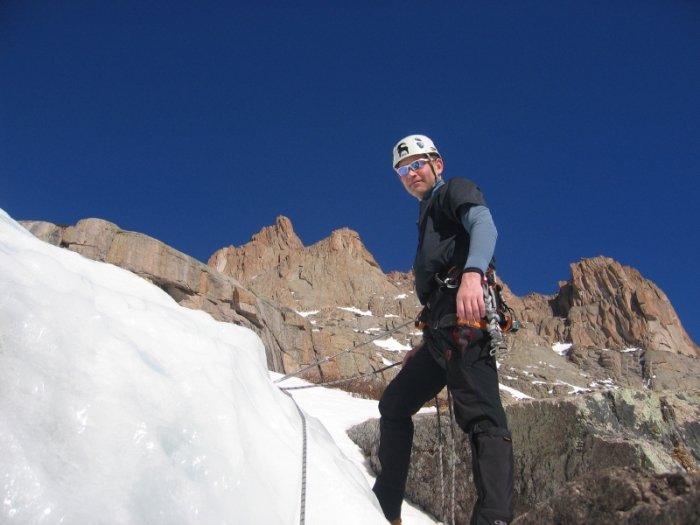 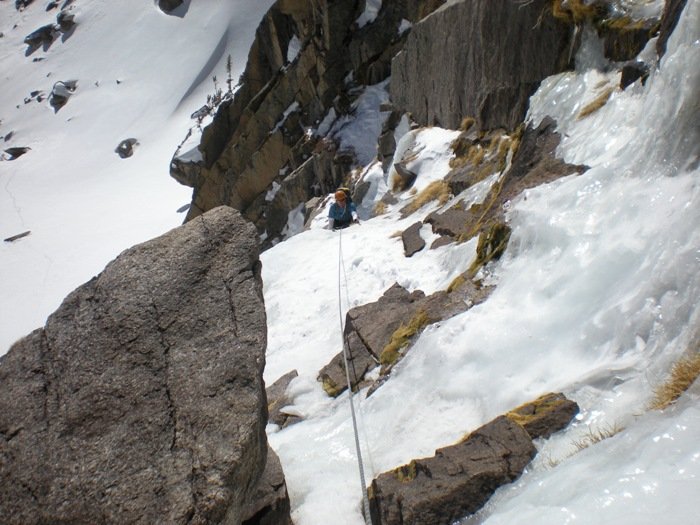 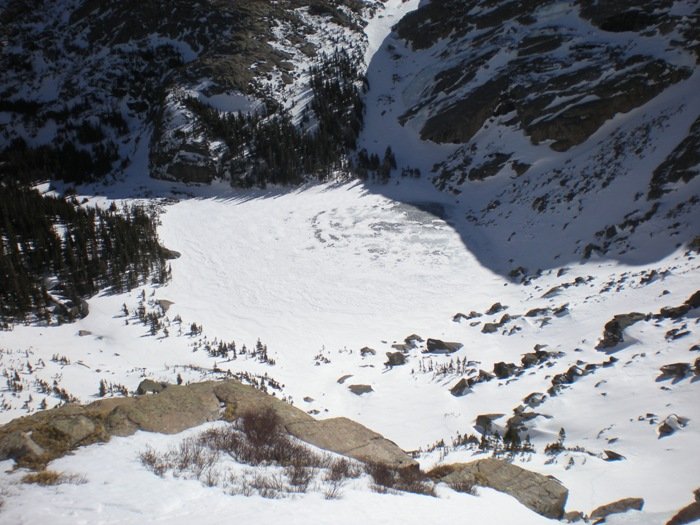 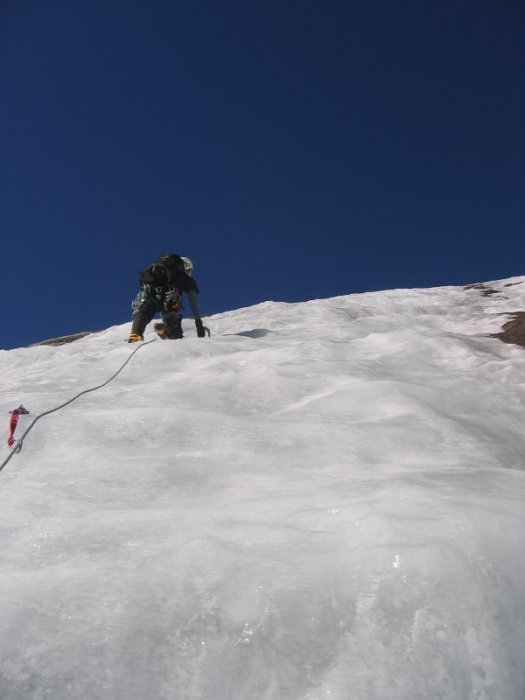 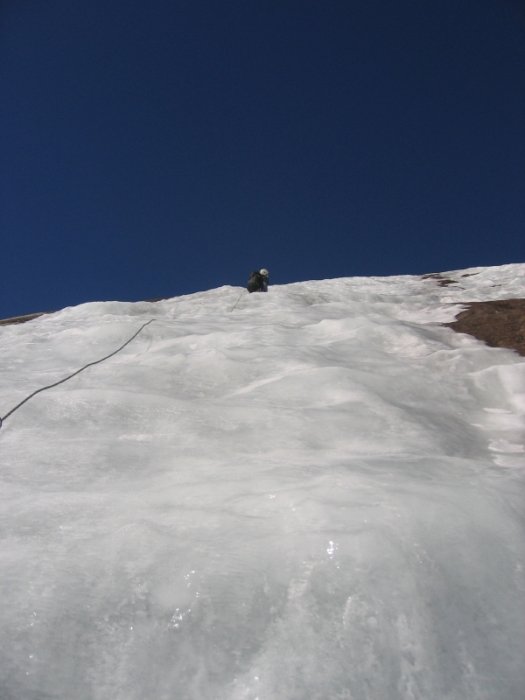 Looking up the last pitch. 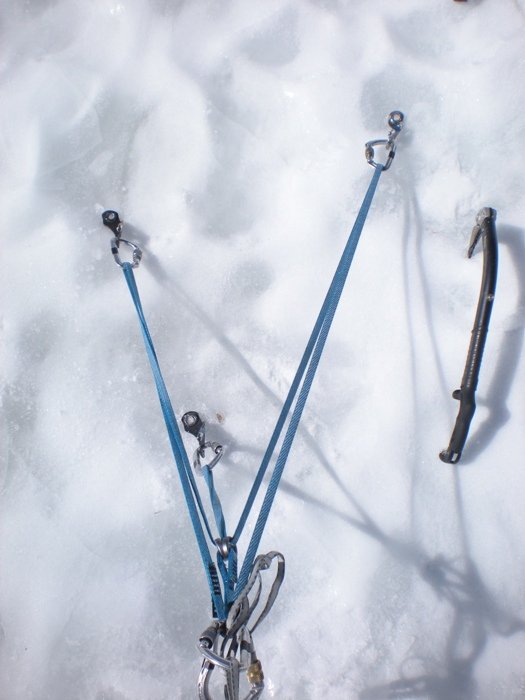 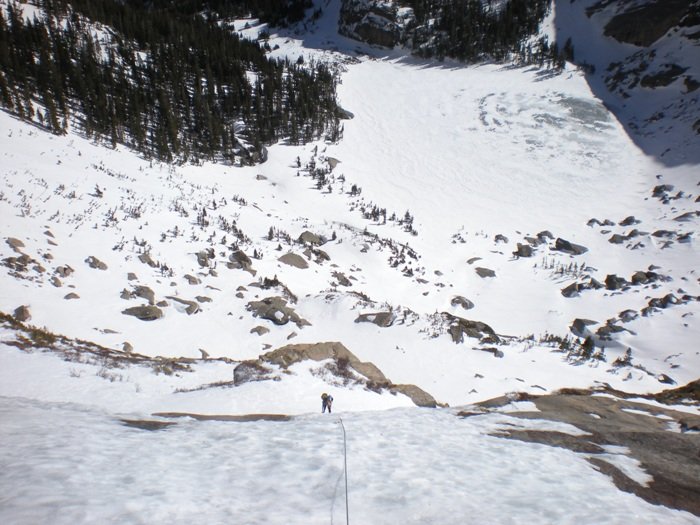 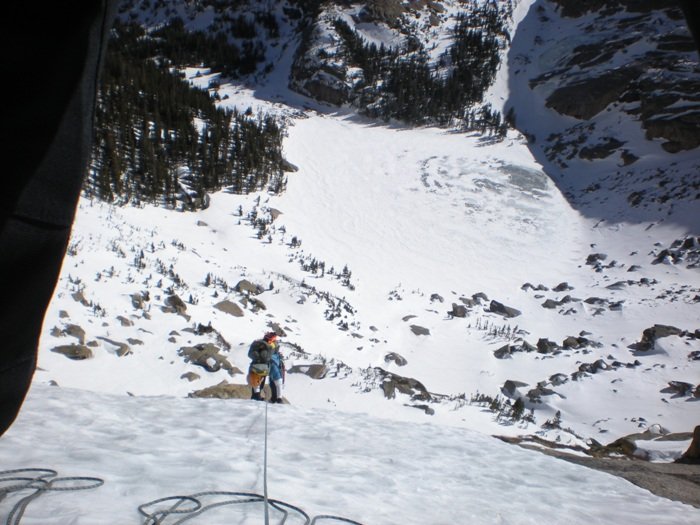 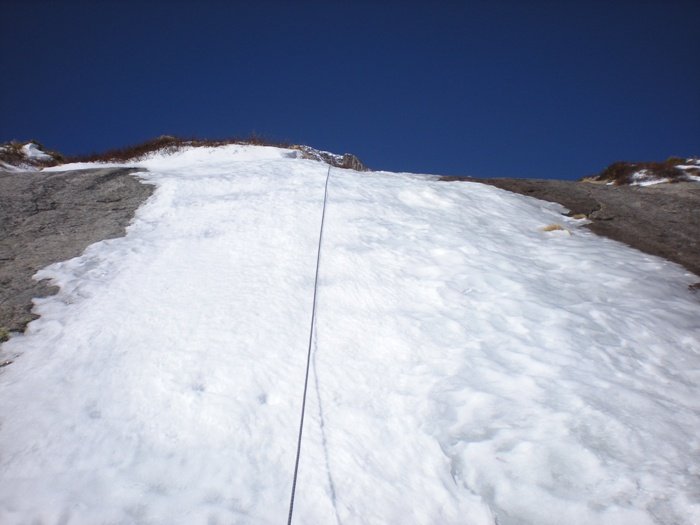 Running out of ice. 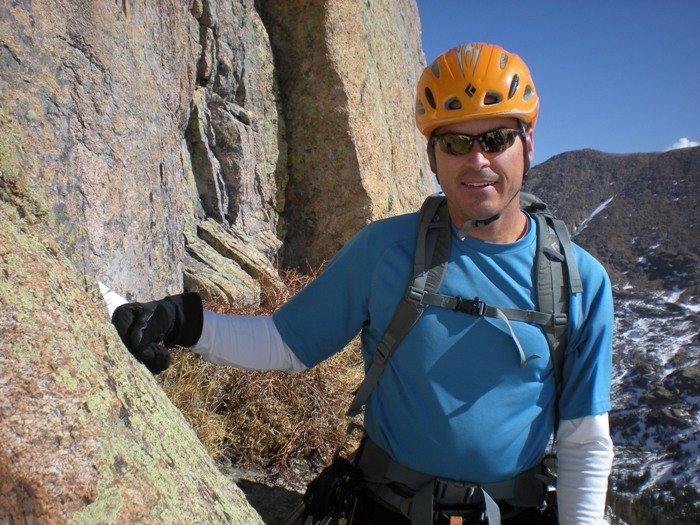 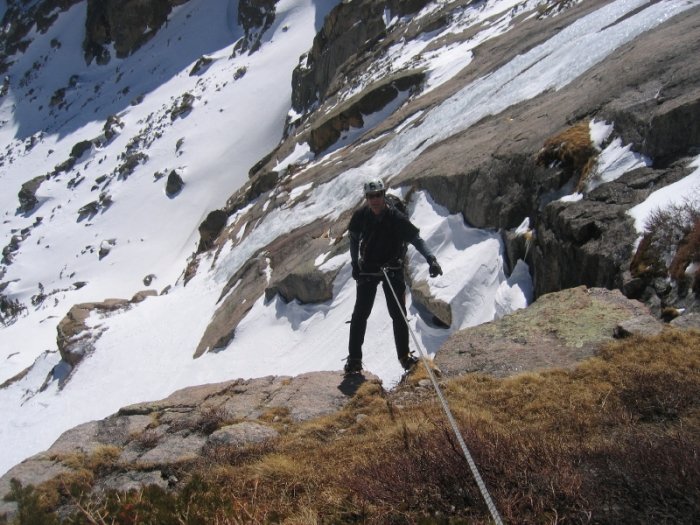 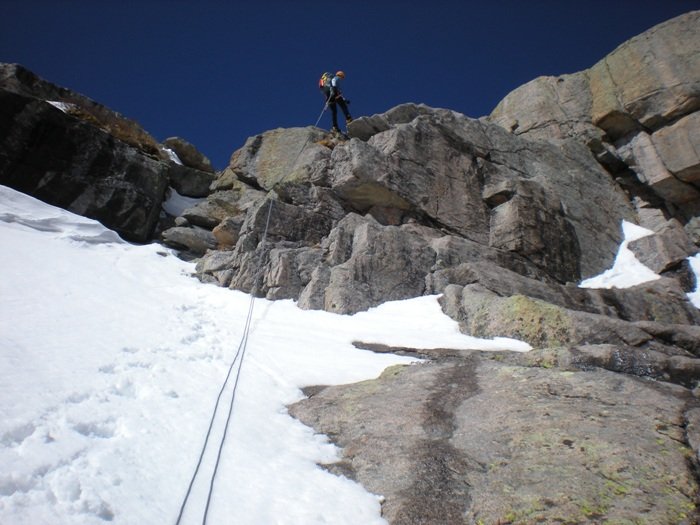 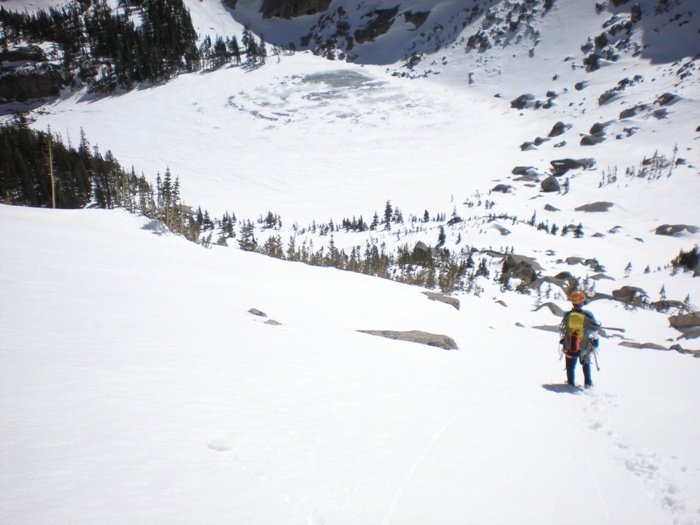 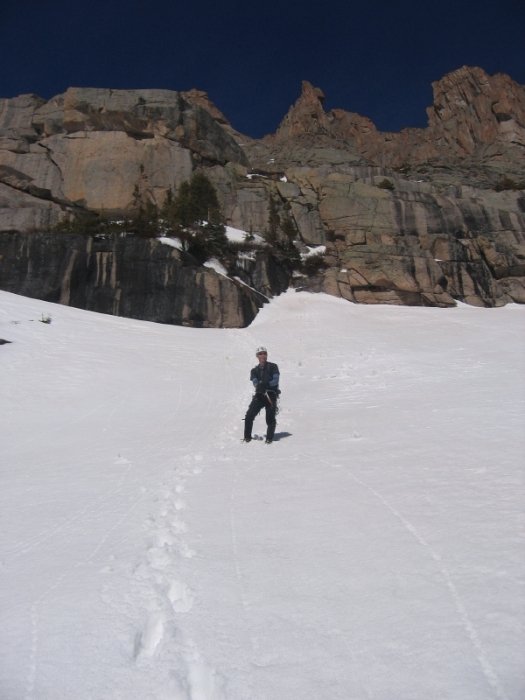 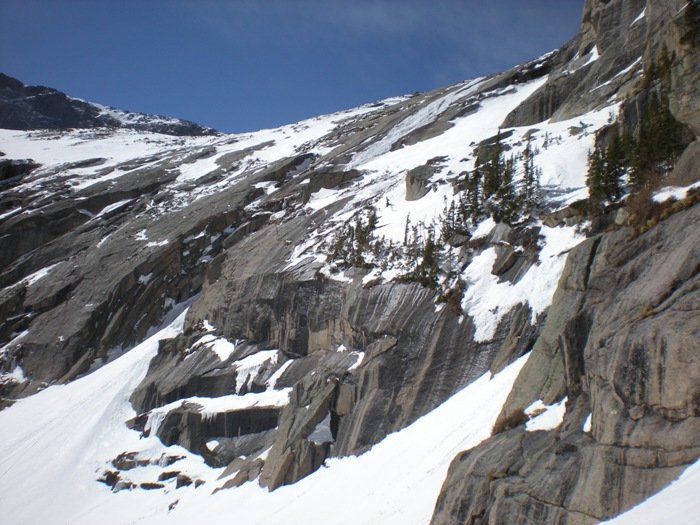 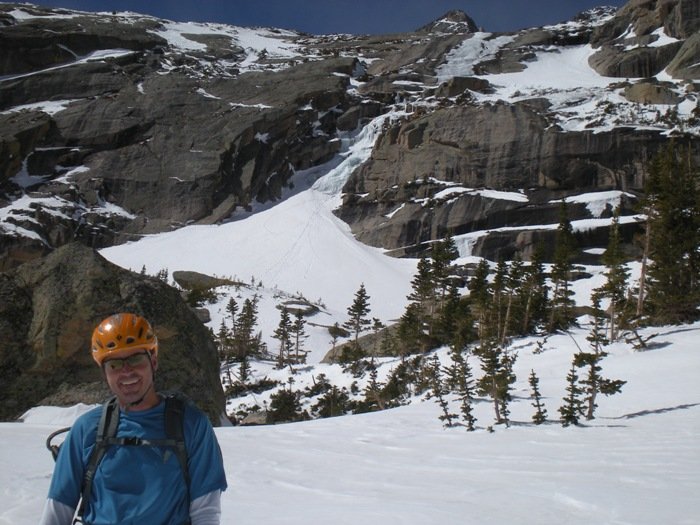 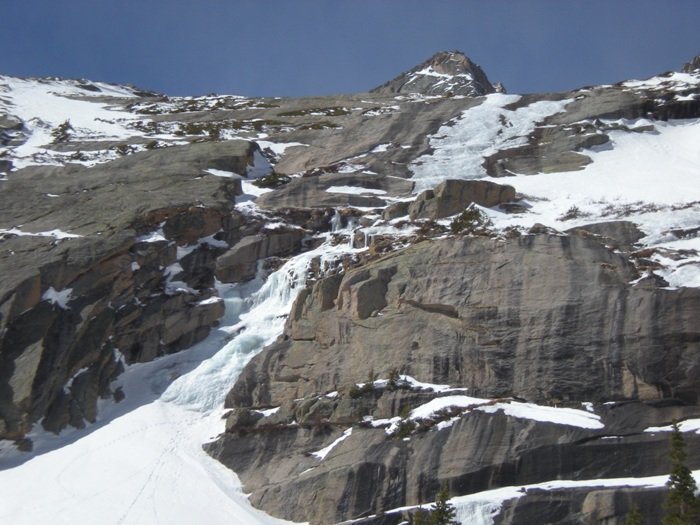 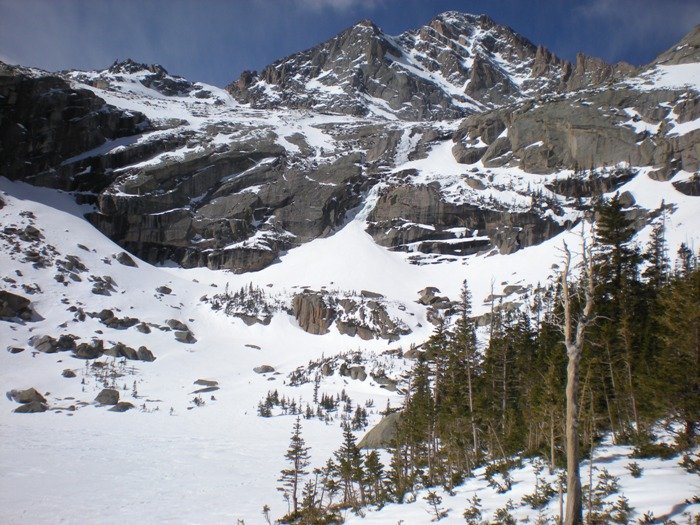