Since Jeff and I wanted to try some harder climbing but knew we didn't have the ability to lead traditional rock above 5.7, Jeff asked his friend Eli Helmuth to take us up Sykes Sickle on Spearhead.  Most of the grades I found online rate the climb 5.9+.  As Jeff and I ate breakfast, Eli arrived from his hike in during the morning.  There was still a relatively steep snowfield at the base of Spearhead so we traversed to the far left of the face and ended up completing three slabby traverse pitches across the lower left face to reach the Middle Earth Ledge and tie into the Sykes Sickle route after completing the first pitch of Spear Me the Details.

The first slab pitch went quickly and wasn't that steep or difficult.  The second friction pitch was more difficult and had a couple of delicate moves to begin the pitch.  The third pitch started up a large left facing crack and then continued to traverse to the right.  At this point, I was tied into the rope about 15 feet above Jeff.  I moved up the crack and then waited for Jeff to work his way up the more difficult lay back.  The next piece of gear was still above and to the right of me on the traverse.  As I stood there enjoying the scenery and waiting for Jeff I remember thinking... why is there so much tension on the rope.  The next thing I knew I was pulled from my stance and barrel rolling across the face.  Jeff came off and pendulumed to the right which pulled me off too.  Jeff swung around once and I rolled across two or three times before we were both hanging below the last piece of gear.  My hand was cut up and bleeding and I banged my shoulder and elbow relatively hard, but nothing serious enough that required us to bail.

After the third traversing pitch, we were almost on the Sykes Sickle route where the more vertical climbing began.  The fourth pitch had another thin traverse before moving into easier ground and heading up.  The fifth was the start of three consecutive 5.9 pitches.  Pitch 5 started off relatively easy and ended with a couple of difficult moves to the belay station.  The sixth pitch started near the base of the Sickle with an off-width climb, to another tricky thin traverse and then up a large crack to the belay station 30 feet below the roof of the Sickle.  Jeff belayed and I videoed Eli as he lead the crux seventh pitch with ease.  As he slipped out of sight, I asked him what happens if we can't climb it.  He clipped an extra sling to a fixed piece of gear and basically said pull on gear if you need to.

Jeff went first and struggled up the crux.  After hanging a while and grabbing gear, he pulled the roof and the difficulties were behind him.  He finished the pitch up to Eli and then it was my turn.  I started off relatively well but peeled off trying to stem across the crux and cut my other hand on the rock.  After I came off, was bleeding, and had a high heart rate, my only goal was to get up the pitch regardless of style points.  A real climber watching me would have been entertained by the flailing and thrashing about.  I pulled the roof as Jeff did with a left heel hook and felt I could breath again.  I continued up a large crack system leaving a trail of blood every place I put my left hand.  I peeked over a lip and not only did I see Jeff and Eli at the belay station, I also viewed the 5.7 slab traverse I needed to cross to reach them.  I was tired from the crux and disappointed to see the challenging climbing left.

Jeff and Eli joked that there were all kinds of jugs above me and I just needed to go for it.  I slowly worked my way up the pitch past the lone bolt trusting my feet on every move.  There were no jugs.  Upon reaching them, Eli took off for our eighth and final easier pitch of the day.  We shook hands at the top of the climb but balked at scrambling to the actual summit of Spearhead.  Eli lead us down the class 4 southeast descent route rather than going down the backside of Spearhead like we did earlier in the week.  Eli took off down the Black Lake Trail while Jeff and I returned to pack up camp and hike out Glacier Gorge.  We stopped at Ed's Cantina in Estes Park, Colorado, for fish tacos and a margarita on the way home. 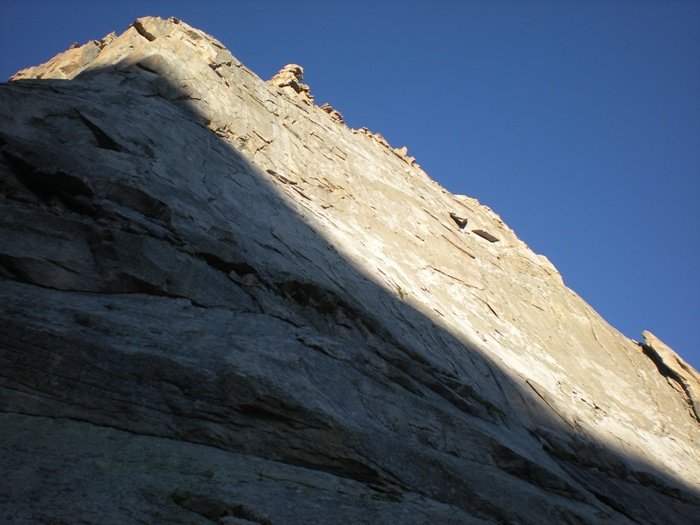 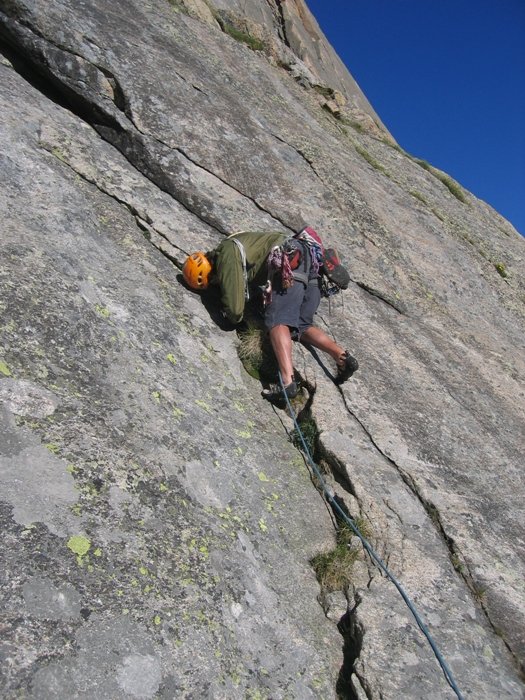 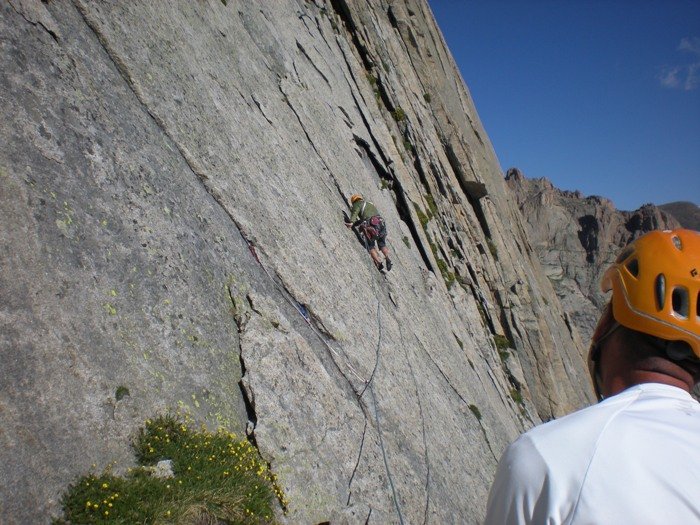 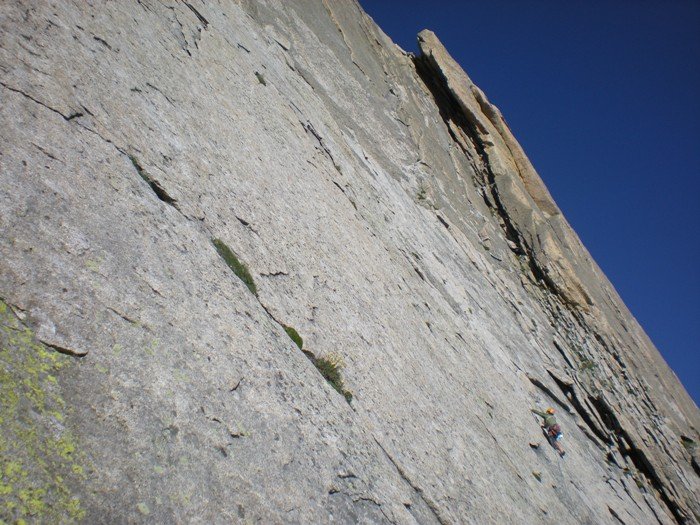 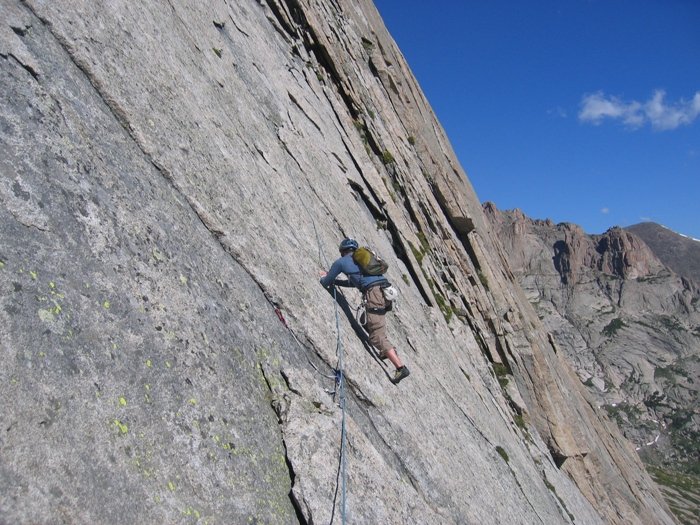 James on the traverse. 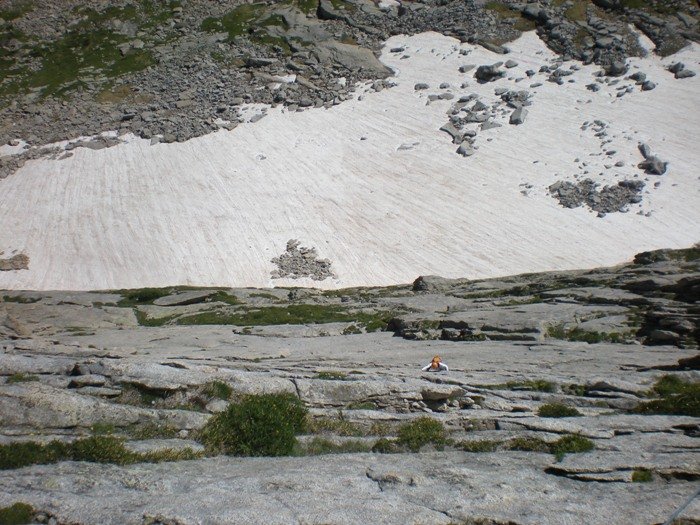 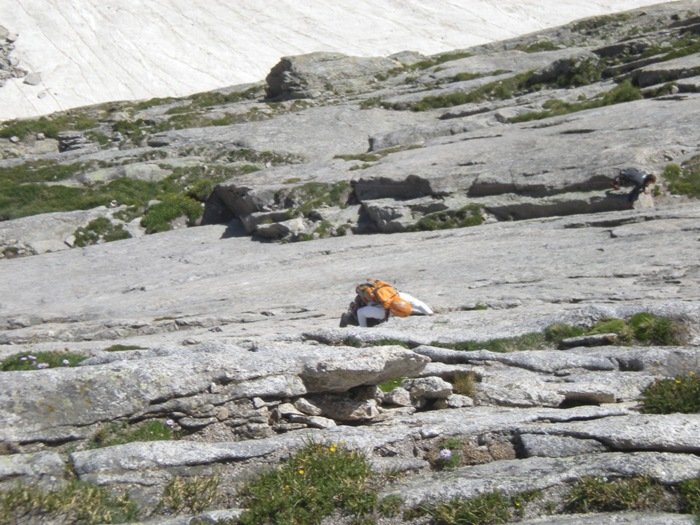 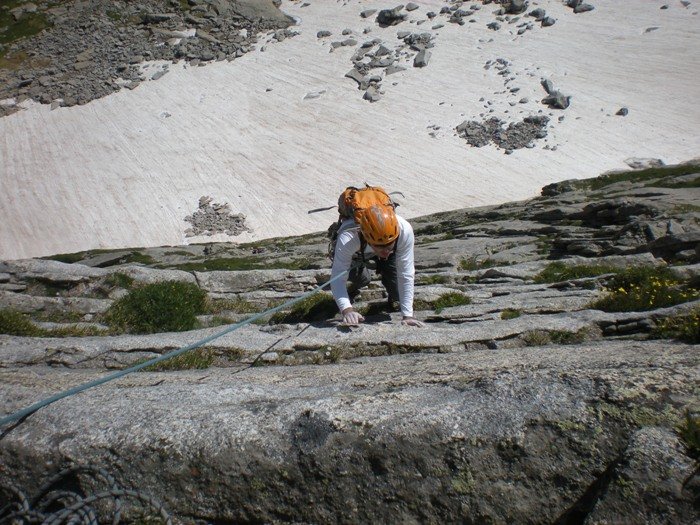 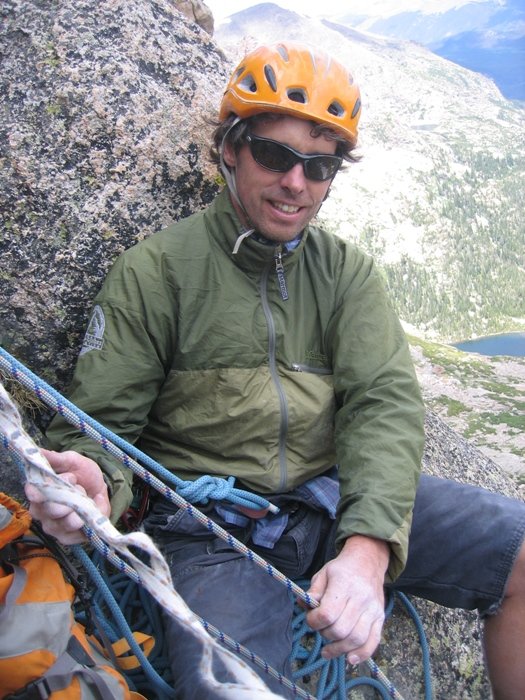 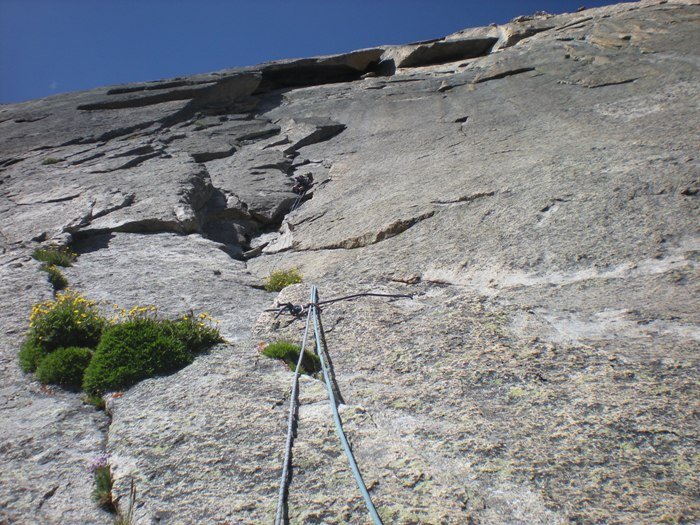 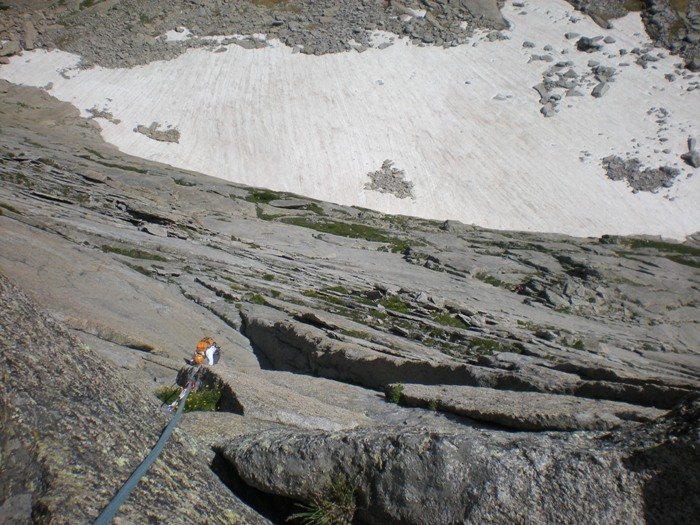 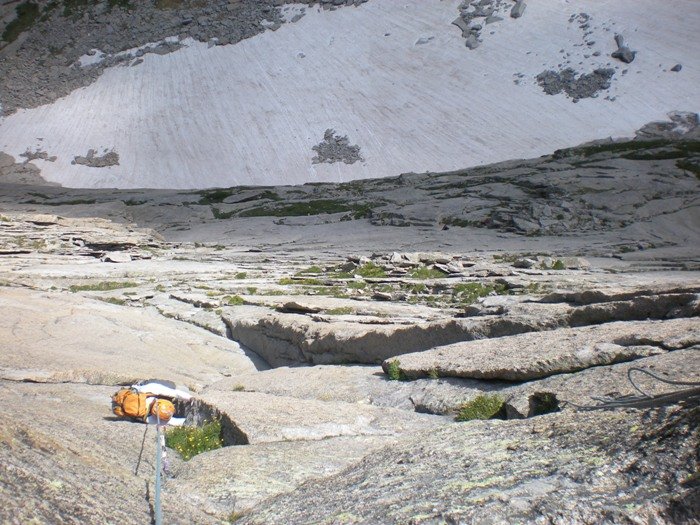 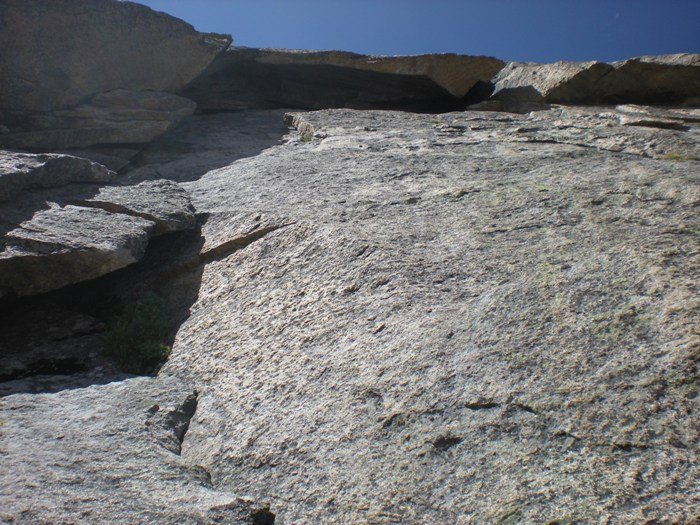 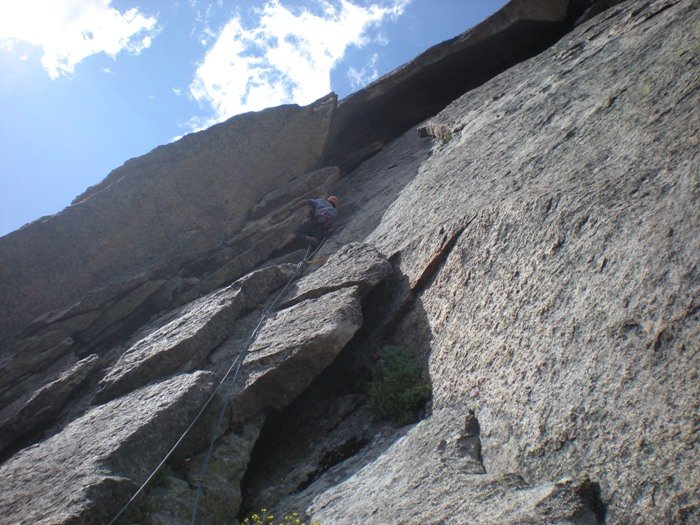 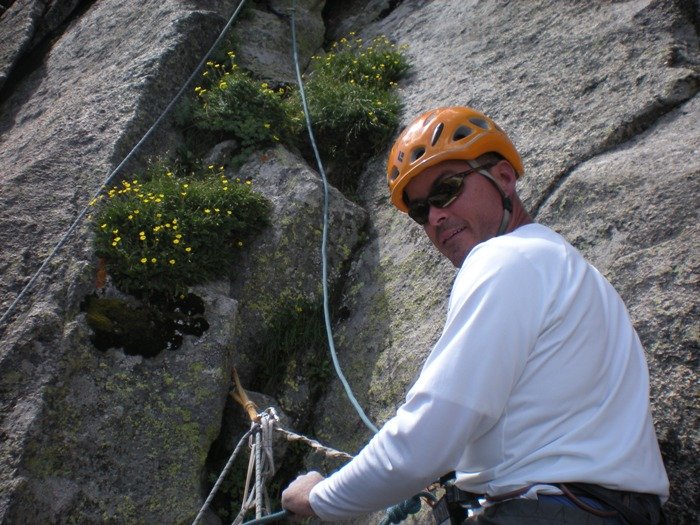 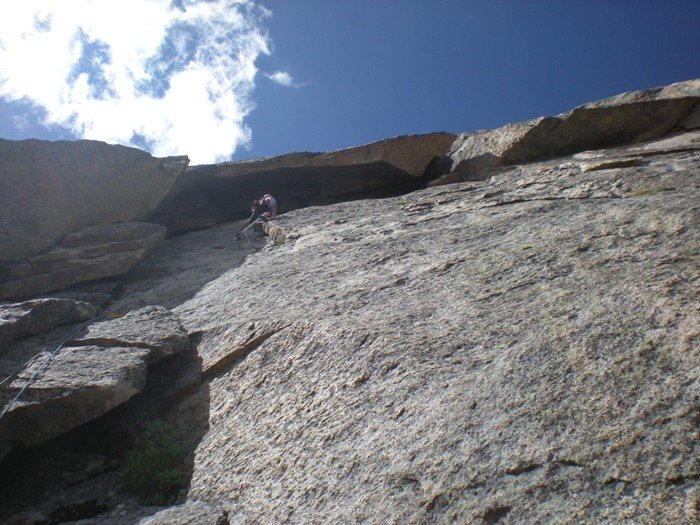 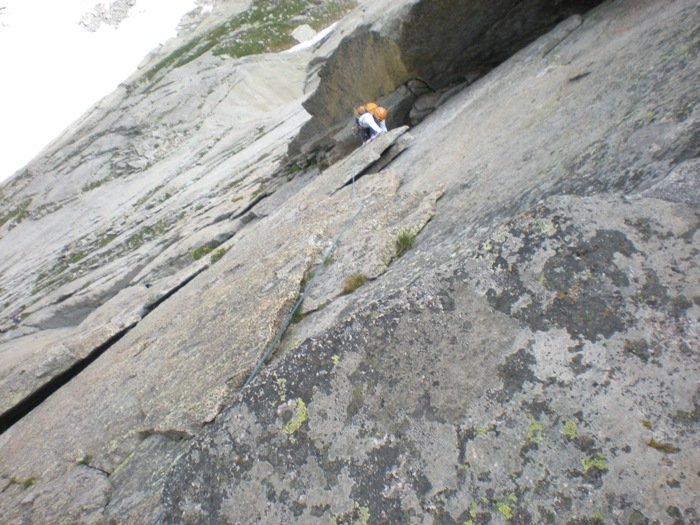 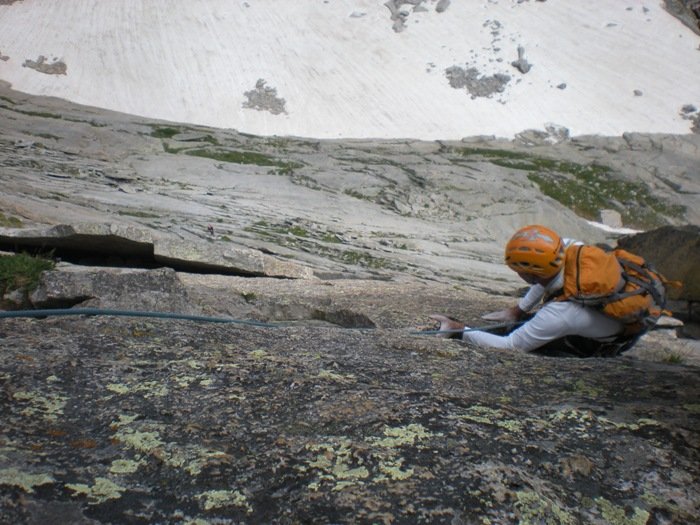 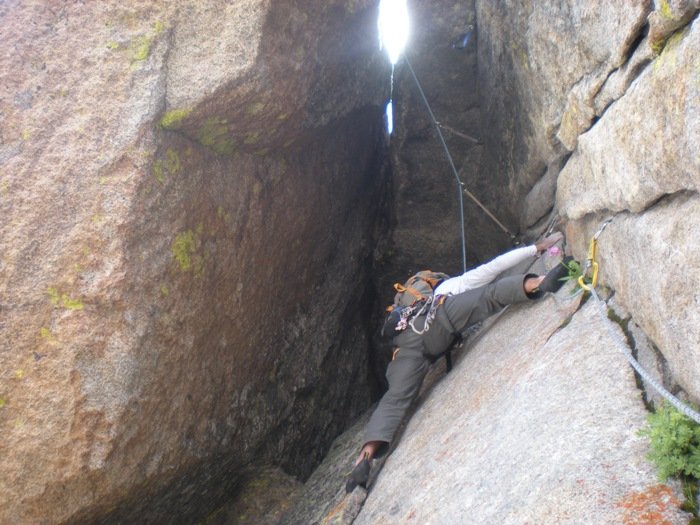 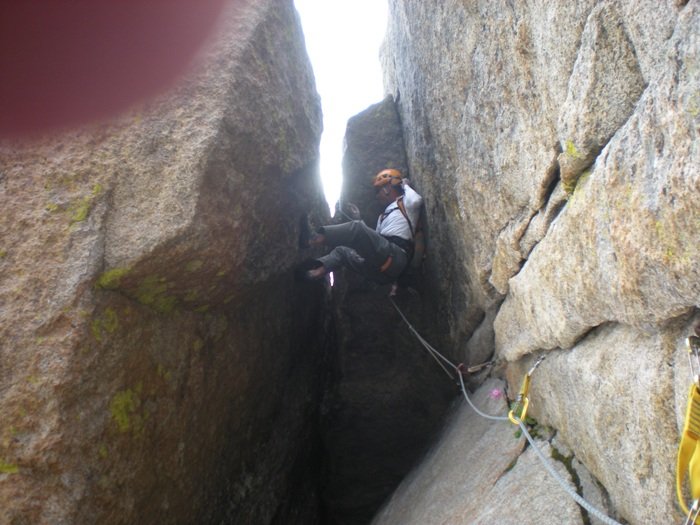 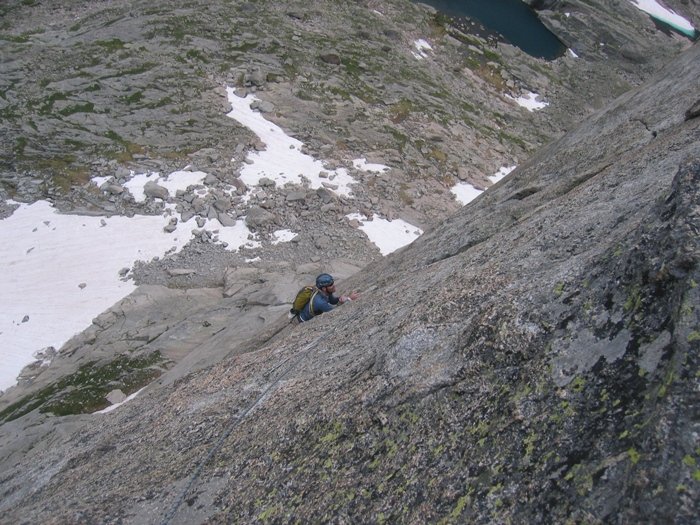 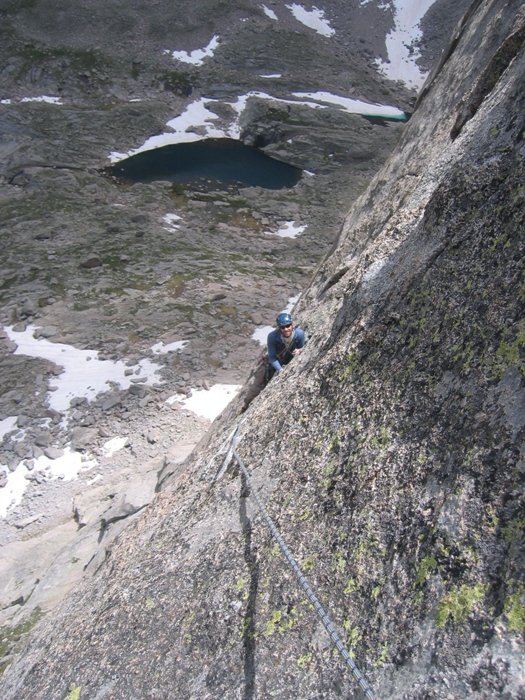 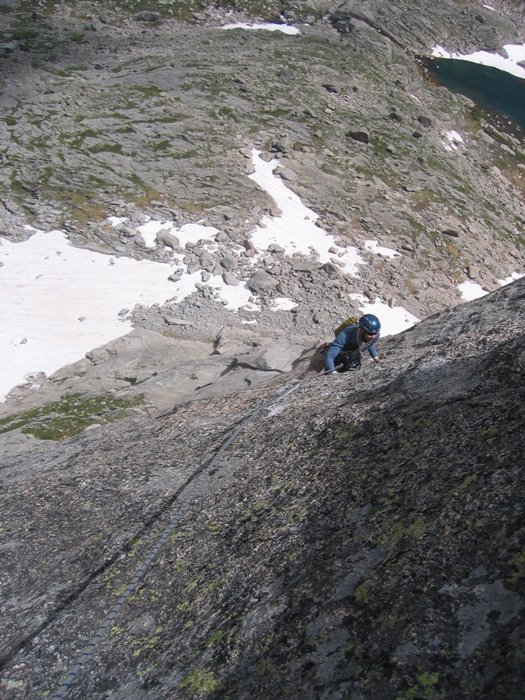 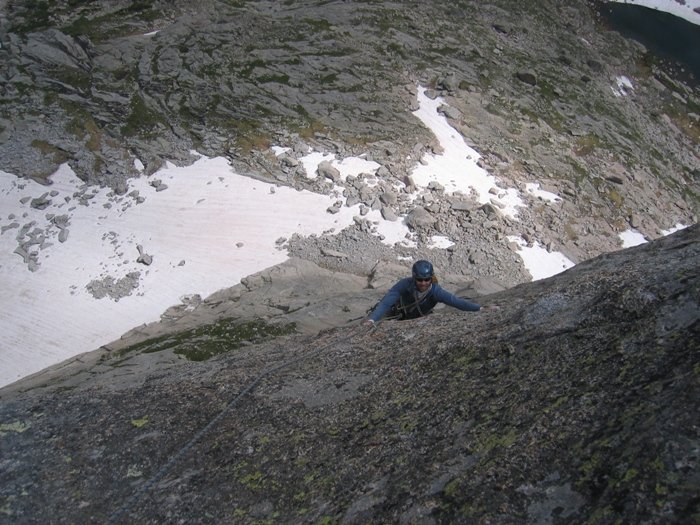 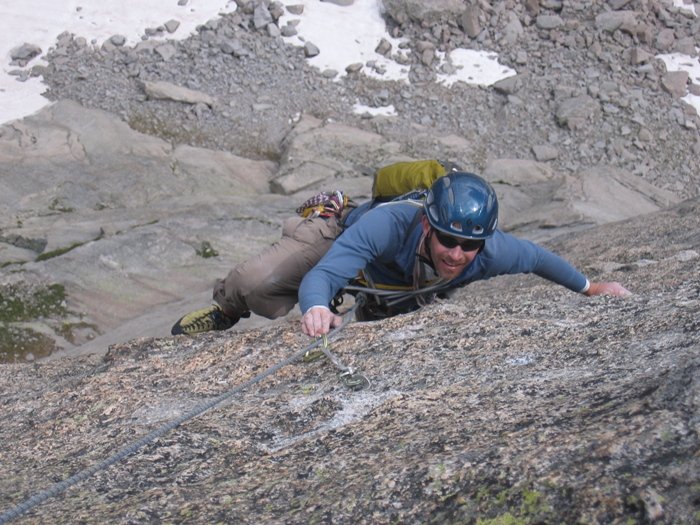 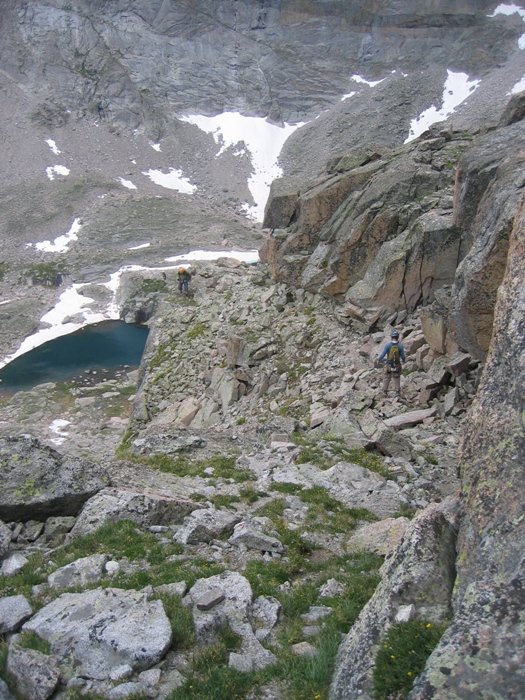 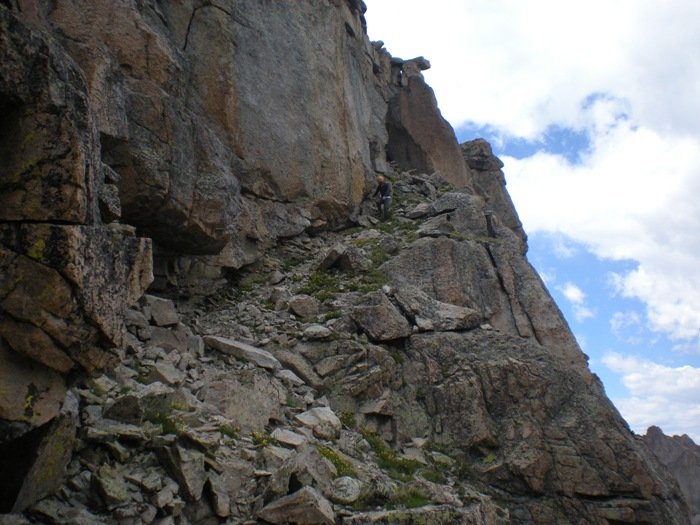 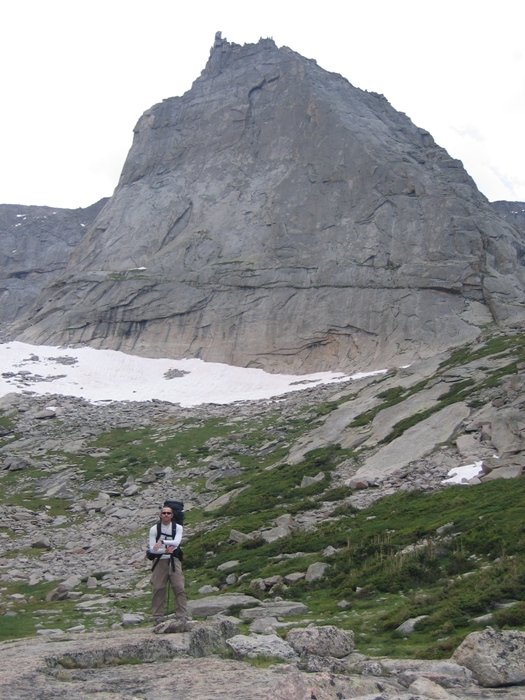 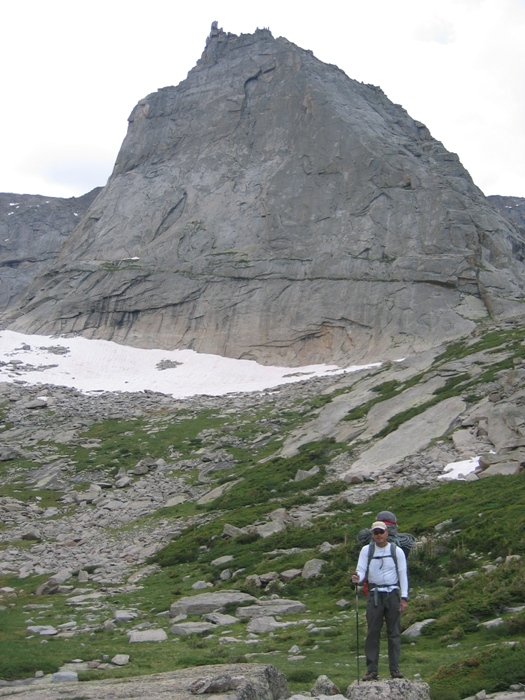