Jeff and I left Highlands Ranch, Colorado, at 4:30 to drive to Brainard Lake near Ward, Colorado.  We were hiking around 6:15 and made good time to Lake Isabelle.  Unfortunately, we ended up on the south side of the lake and I made the strategic error of continuing on the south side rather than backtrack a couple hundred feet to get on route.  As we bushwacked and post-holed our way west, we watched as several climbers and skiers passed us by hiking along the ice on the north shore of the lake.  This foolishly cost us some time and energy.  At Isabelle Glacier, all the other climbers went left or straight for Queens Way, Apache Couloir, or the Navajo Snowfield.  Jeff and I turned right heading for the Southwest Couloir on Shoshoni Peak.

Some friends recently climbed the western couloir which is considered the most interesting and challenging of the three couloirs on Shoshoni Peak's southwest face.  As we approached the apron of the climb, we were surprised to see four other people on the rock rib to the right of the crux.  The western couloir is simply a steep snow climb with a short technical rock step approximately one-third of the way up.  After the other climbers moved above the crux, we started up and were at the step in only a few minutes.  It was my turn to lead so I decided to give it a go.  I quickly realized the snow was in poor condition and there was little ice.  Nothing seemed to hold a tool stick, and I wasn't confident in my foot placements either.  I got a shallow piece of gear in at the base of the step and continued up.

I maybe should have backed off because of the terrible conditions.  There is a low class 5 rib to the right of the couloir crux that avoids the rock step and provides a great alternative to wallowing up the center.  Even traversing back into the couloir from above the step would have been easy on the rock rib route compared to the melting rock step.  Below the top of the lip, I slung a small ice pillar which I realized was weak but wanted some psychological pro.  In addition to water running in the cave under the chock stone, snow was finding its way down the couloir from the climbers above.  I worked my way up and gently tapped on the ice pillar for a possible foot placement.  I guess I didn't realize how weak it actually was because it crashed into the cave leaving my slings and carabiner to slide down the rope to my only piece of gear below.

I had two reasonable foot holds and a solid undercling with my left hand, so I started clearing away snow and swinging my right tool looking for a solid hold to pull the lip and get on stable snow.  I finally found a good crack above me for a solid cam and clipped in which provided me with a significant amount of relief.  Unfortunately, I still couldn't find a good tool placement, so I back-stepped against the left rock wall and ended up grabbing the gear to pull the lip.  I climbed another 40 feet to a small saddle and built a solid anchor to belay Jeff up on.  Jeff worked his way up fairly quickly and we were off.  My recommendation would be to climb this route early enough to keep in entirely a snow climb with the step not an issue, or climb the rock rib to the right of the crux which looked like it would take more and better gear.

We packed the gear, used the steps of the previous climbers and were at the top of the couloir quickly.  We scrambled over to Shoshoni Peak's summit, took a few photos, ate, and drank.  The party of four left about five minutes before our arrival.  It took us 5 hours and 5 minutes to summit.  We spent about 25 minutes on the summit and then descended the east ridge following the party of four.  I'll definitely return to the area to climb the Navajo Snowfield, Apache Couloir, or Queens Way. 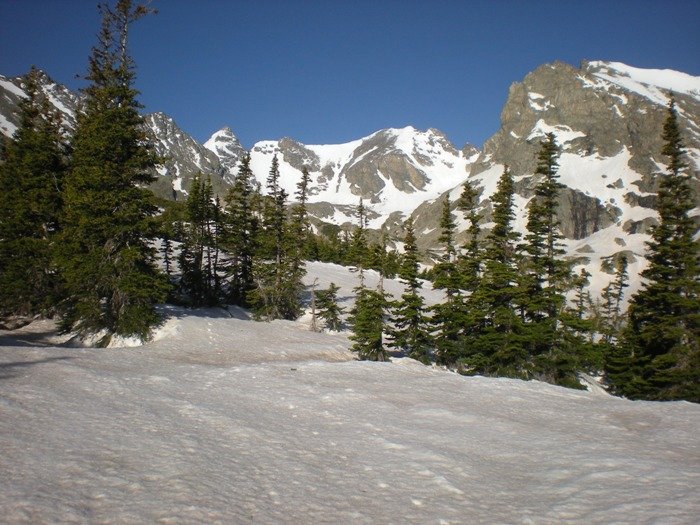 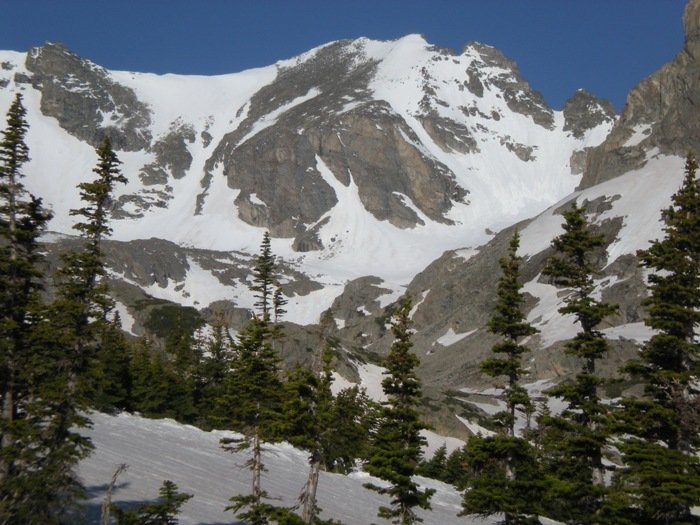 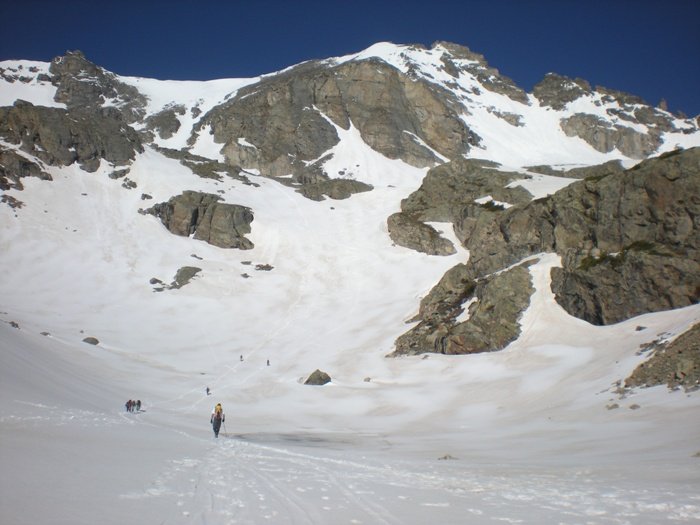 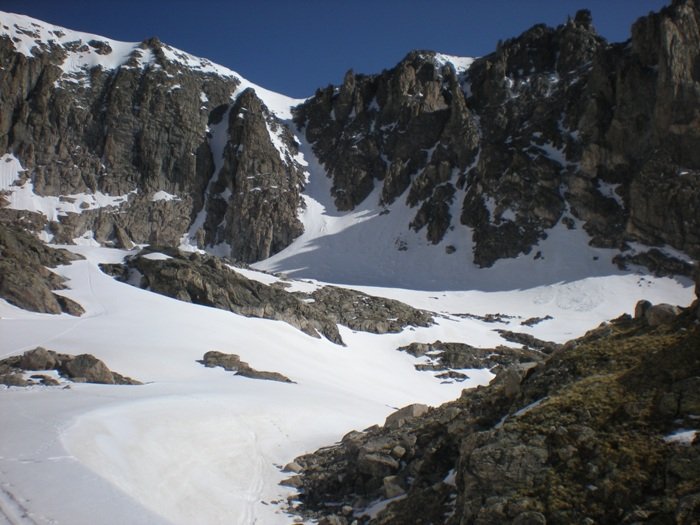 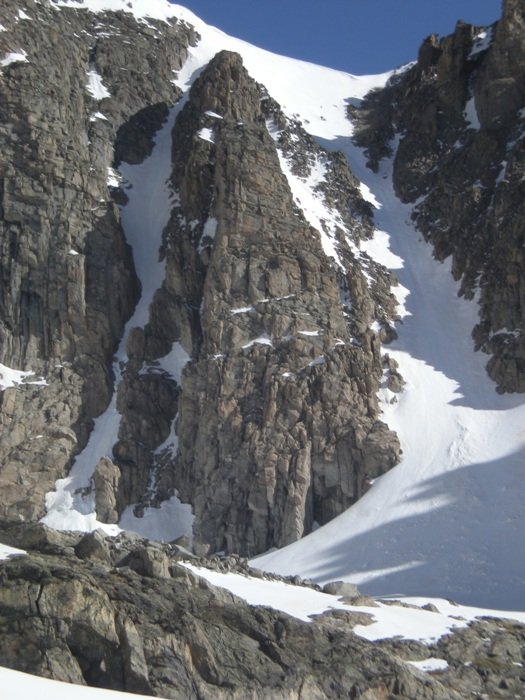 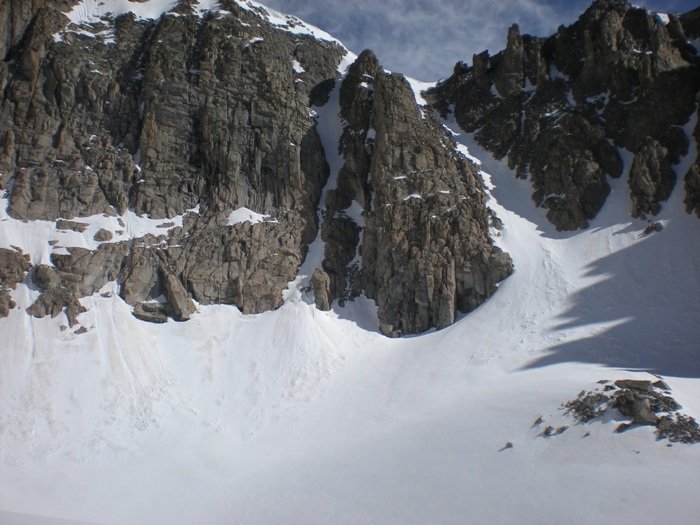 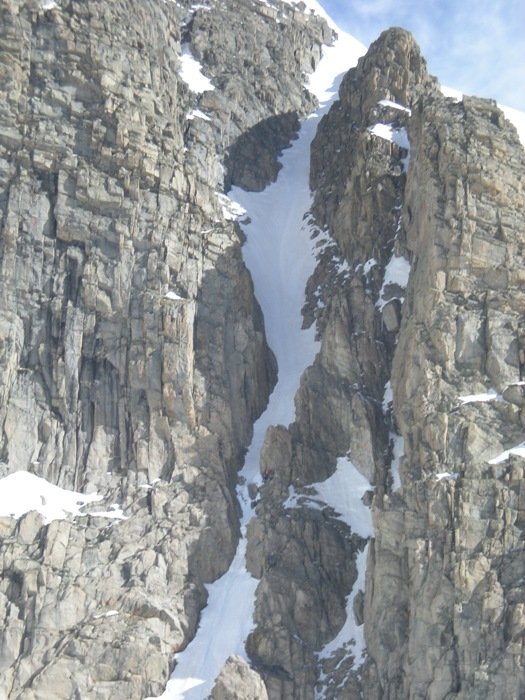 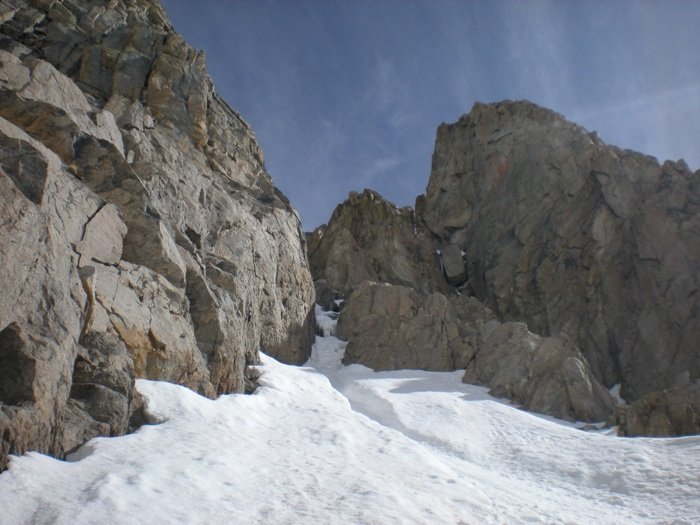 Starting up the couloir we climbed. 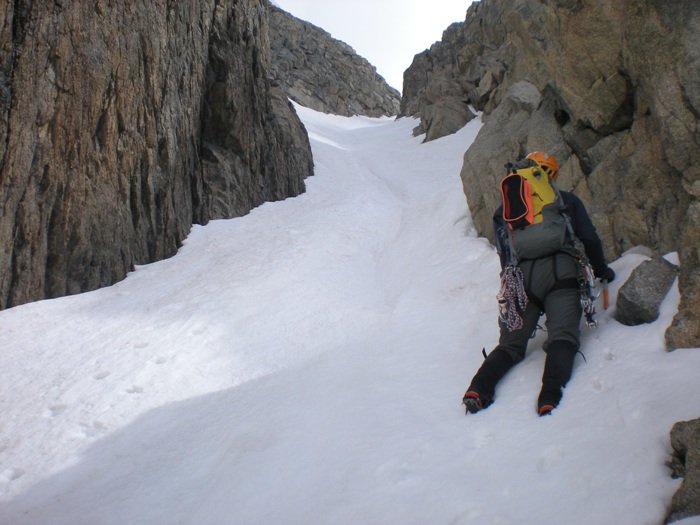 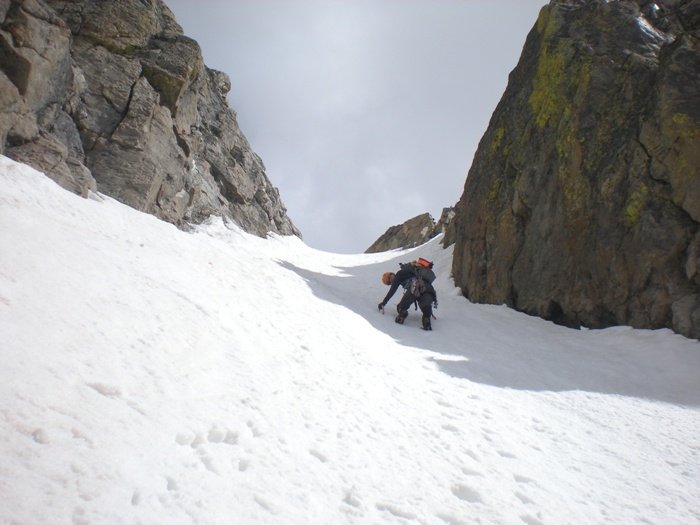 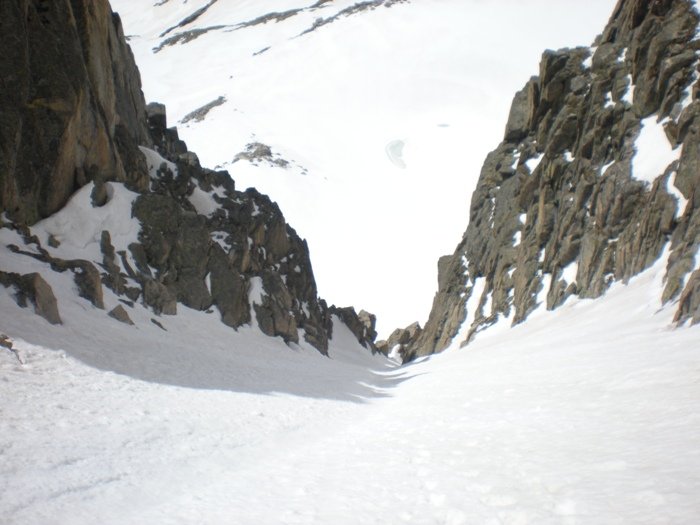 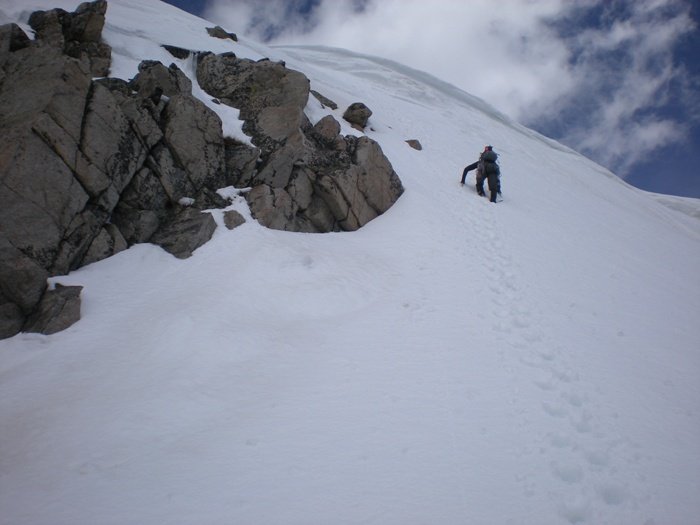 Jeff nearing the top of the snow climb. 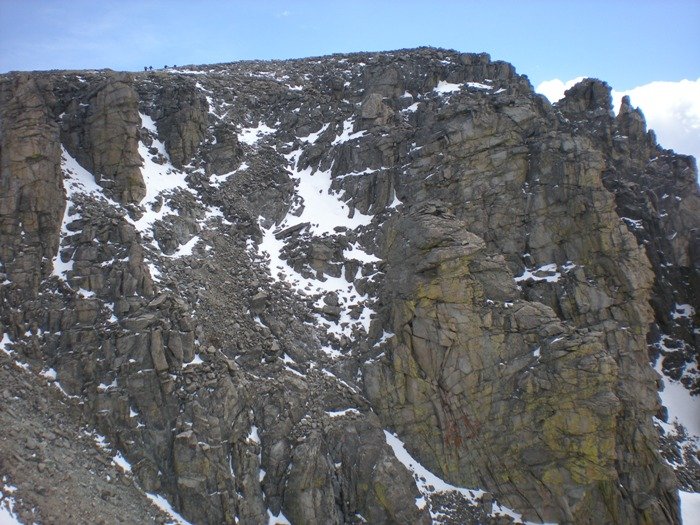 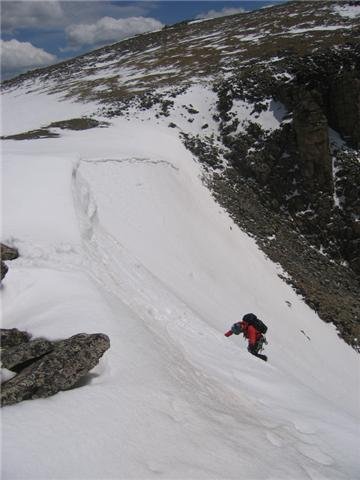 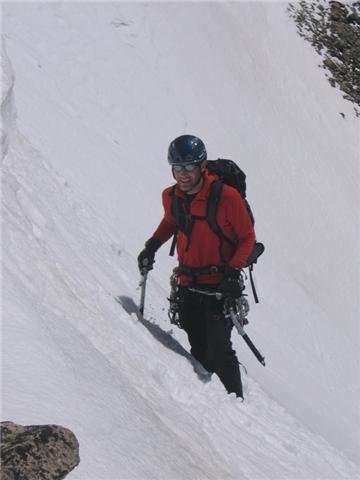 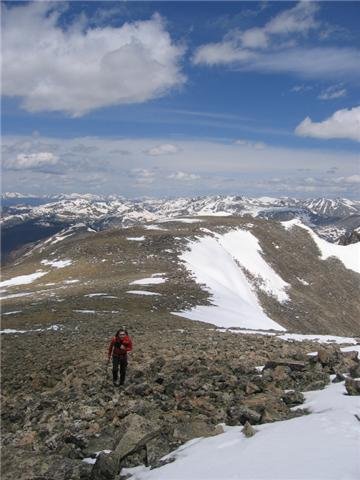 Hike to the summit. 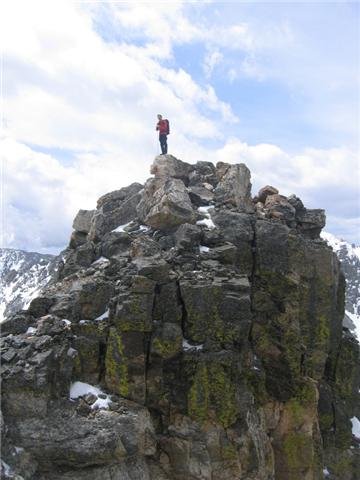 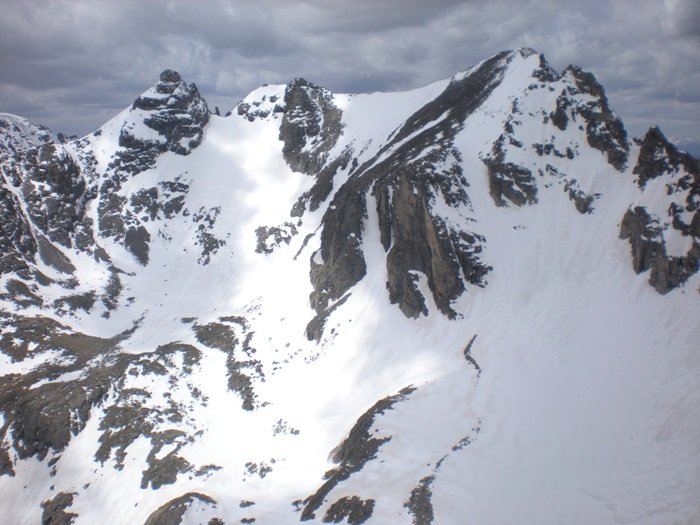 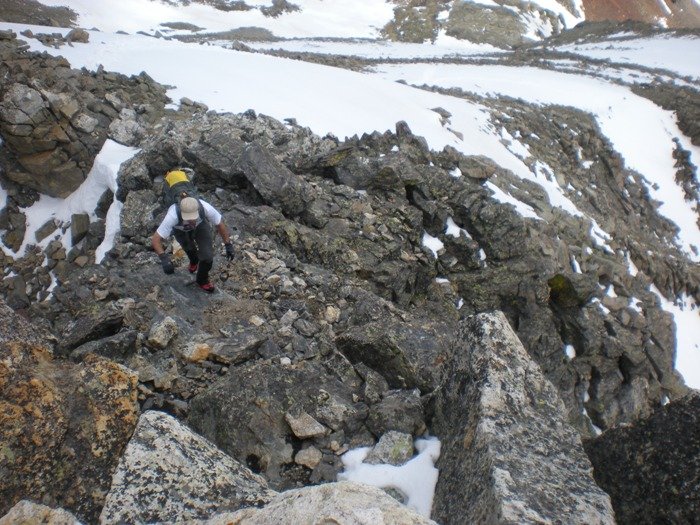 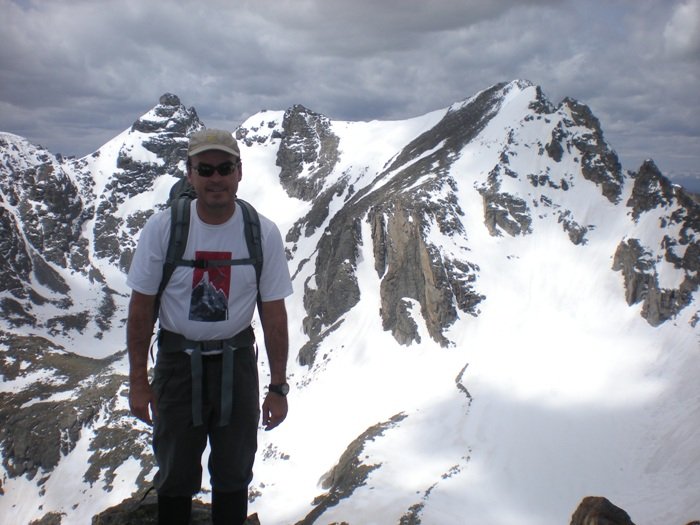 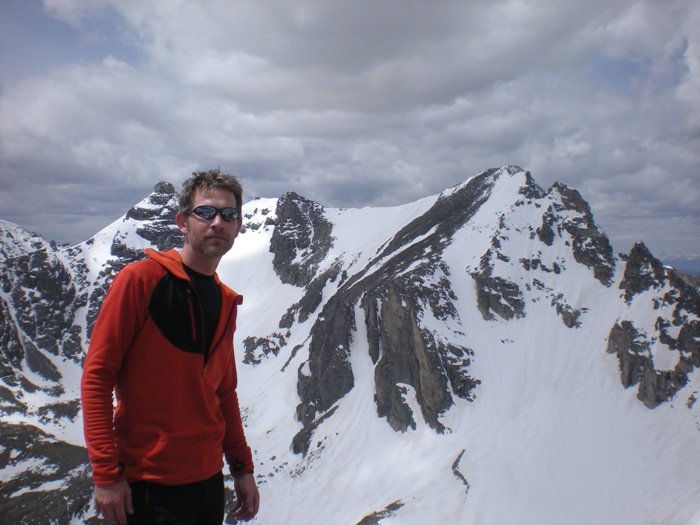 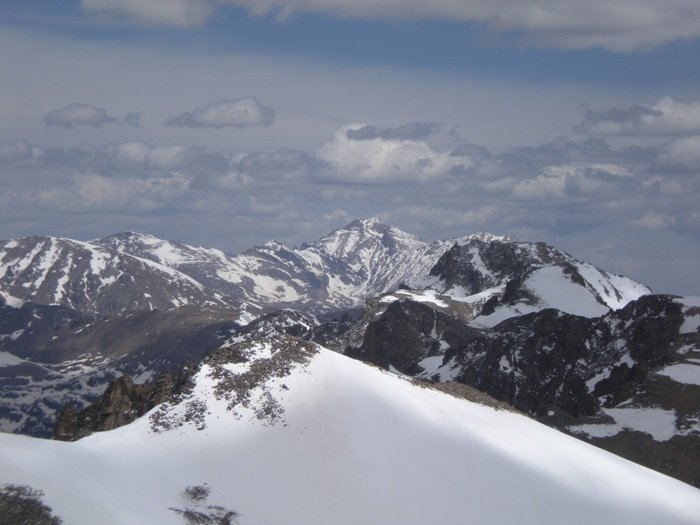 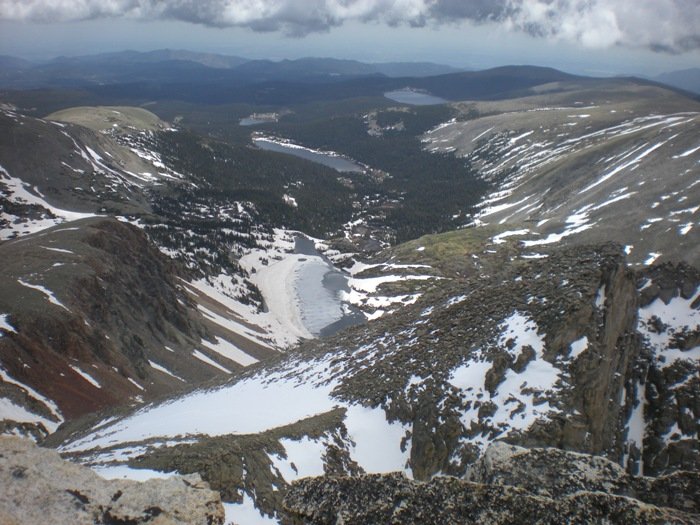