Brian and I had never been to the Never Summer Mountain Range, so we decided to check it out over Memorial Day.  The drive from Denver, Colorado, took a while but we were hiking by 6:30.  The first part of the hike is along the Michigan Ditch road which was easy.  Once we left the road, we used snowshoes to stay afloat in the basin to the northeast of the Nokhu Crags.  As we approached the Grand Central Couloir and Nokhuloir, it was obvious that they had already slid with a significant amount of avalanche debris at the base of the climbs.  It took about 2 hours and 15 minutes to reach the apron of the couloirs where we took 30 minutes to gear up, eat, hydrate, and take in the views.  The clouds had finally lifted to the point where we could see the top of the routes which didn't seem very far away.  Both these couloirs are relatively short and do not take long to climb.

We made short work of the Grand Central Couloir taking turns kicking steps.  Once in the notch between the Nokhu Crags, the wind from the west was noticeably chilly.  We scrambled around towards the southern crag but weren't too interested in trying to summit from this side.  Not only is the rock completely rotten, there was a layer of rhyme ice covering much of the mountain on the west side.  I mentioned to Brian since we were there, we might as well descend the Grand Central and also climb Nokhuloir.  He agreed, so that's what we did.  Before entering Nokhuloir, we did notice a brief shower of rock fall, but other than this the day was relatively uneventful.

After reaching the notch to the south of the southern Nokhu Crag, we snapped a few photos and I started to prepare for the descent.  Brian peeked around the corner and said he thought we could top out.  I honestly wasn't even thinking about the summit when he said this.  We left our packs at the top of the couloir, and after I grabbed my jacket we were on the summit after five minutes of scrambling up loose rock and talus.  We took a couple of photos and returned to the top of Nokhuloir.  Brian sat down at the top of the snow and started his glissade.  I followed in his path and actually yelled a warning because of the amount of snow building in the runnel.  We were quickly back at our snowshoes and hiking back to the trailhead..  The road seemed to take forever to hike out on, but we finished the trip after 6 hours and 20 minutes. 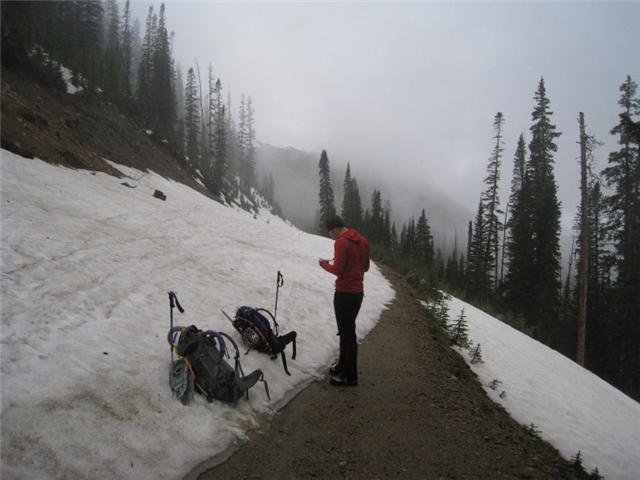 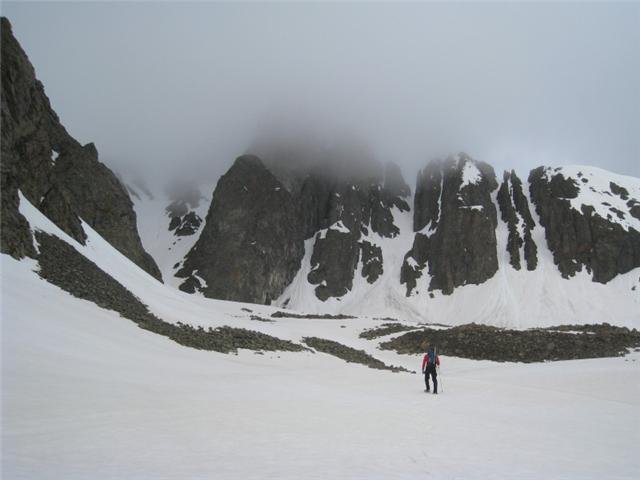 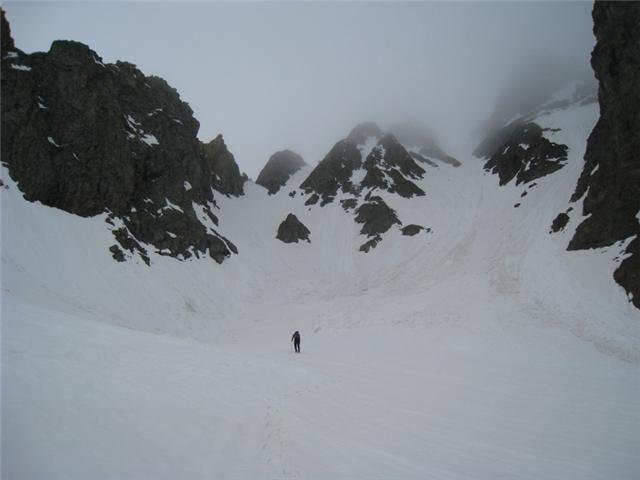 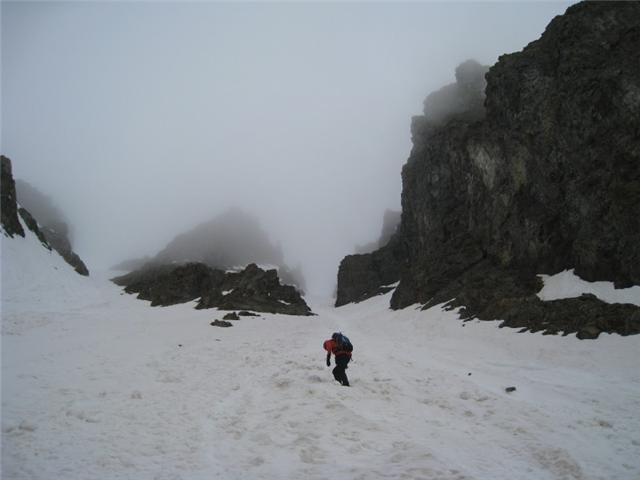 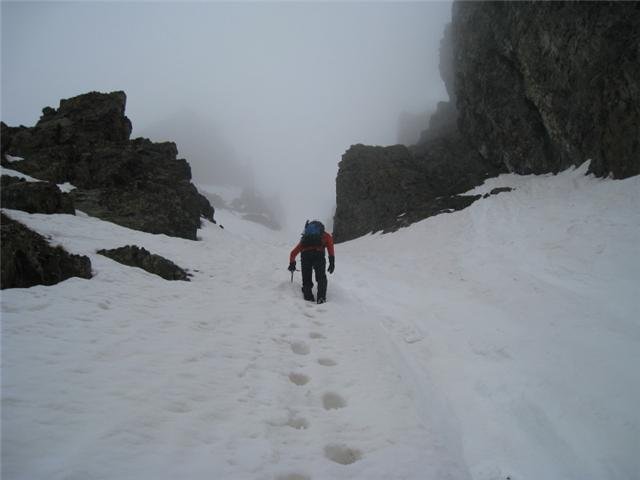 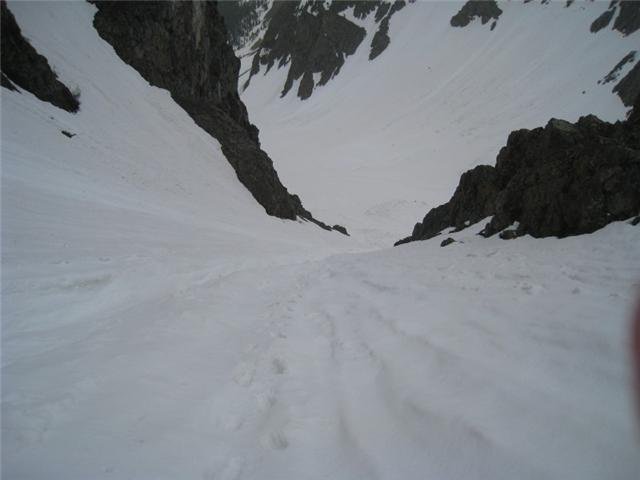 Looking down the climb. 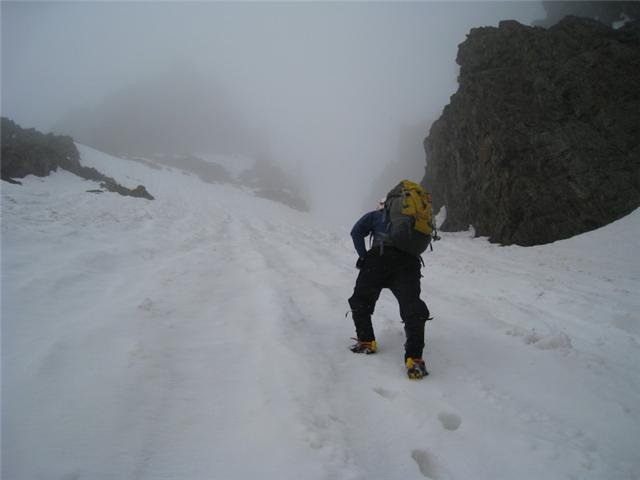 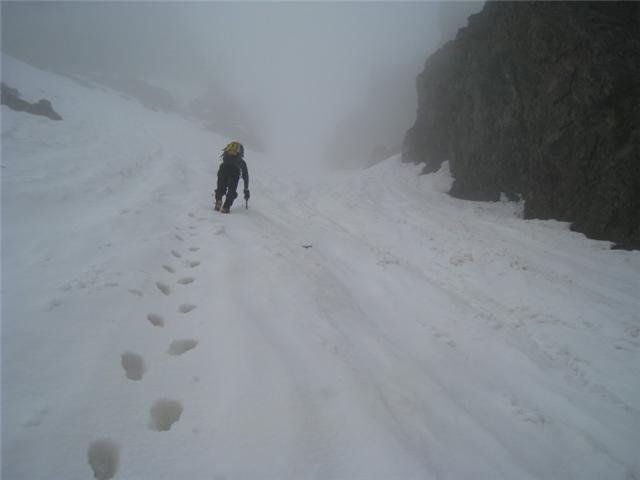 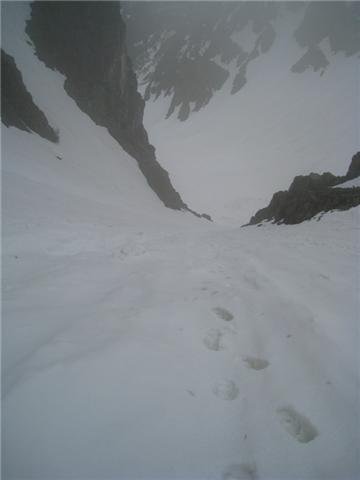 Looking down the snow climb. 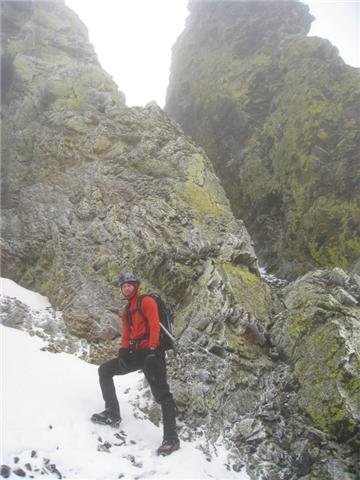 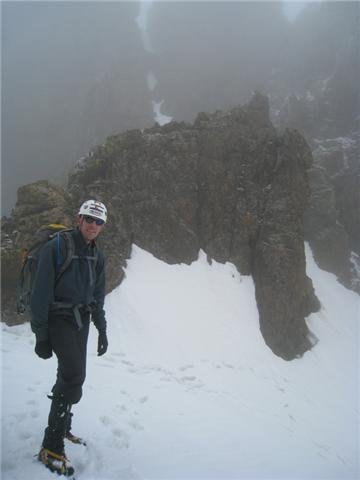 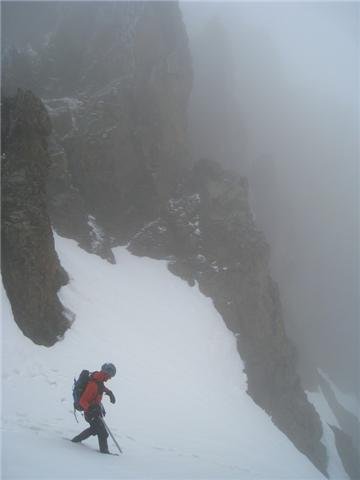 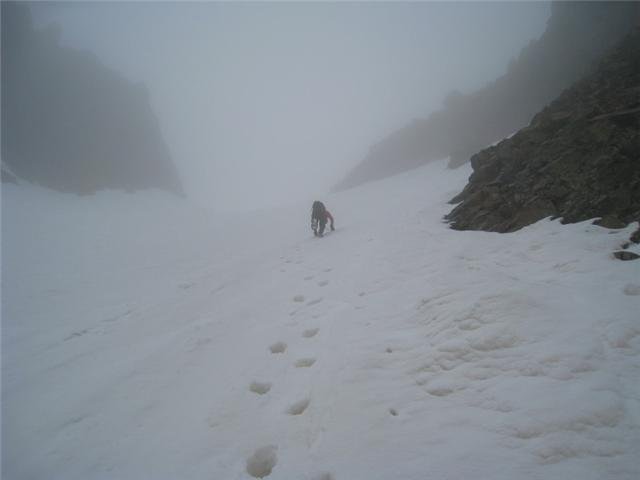 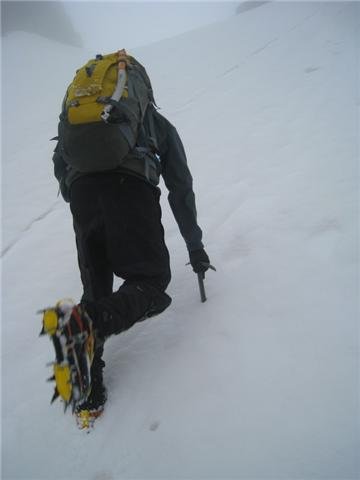 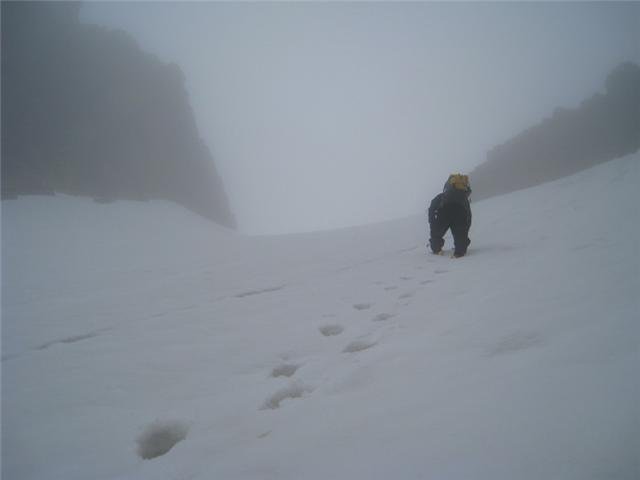 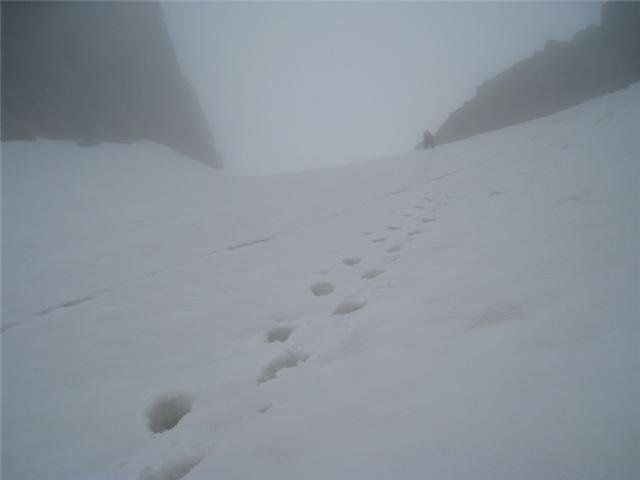 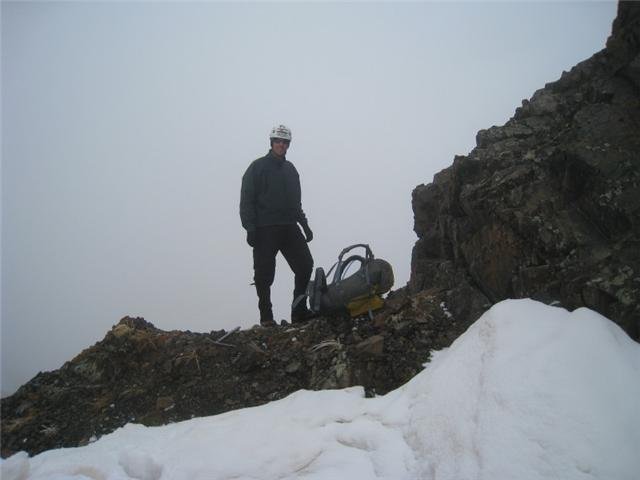 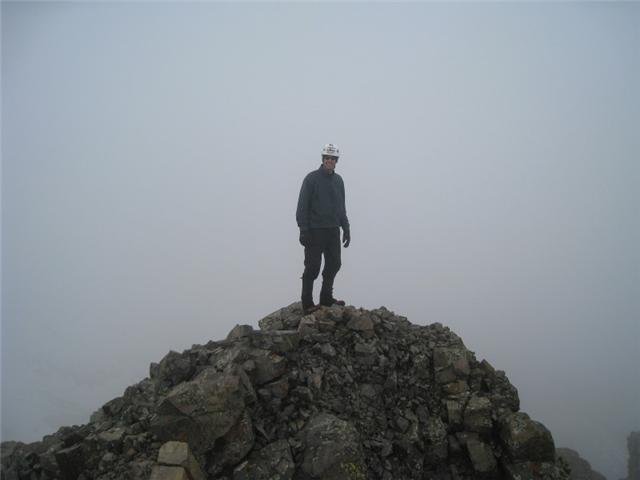 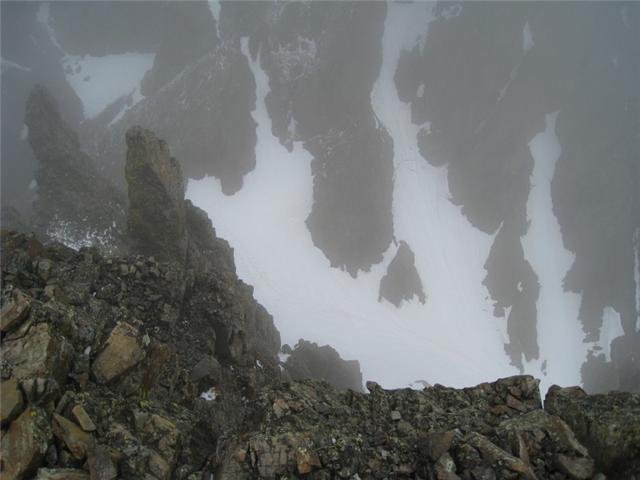 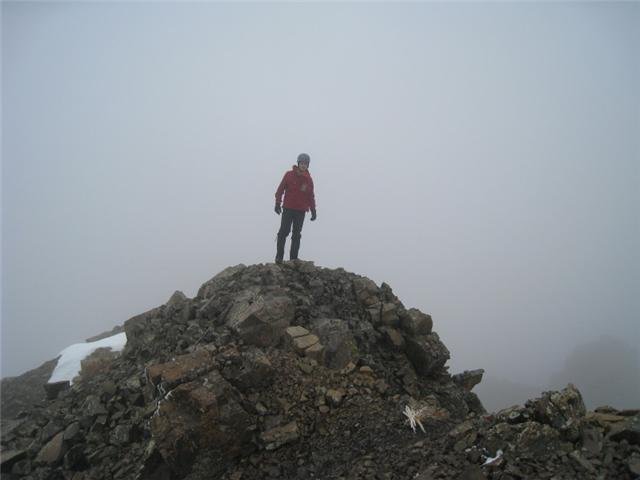 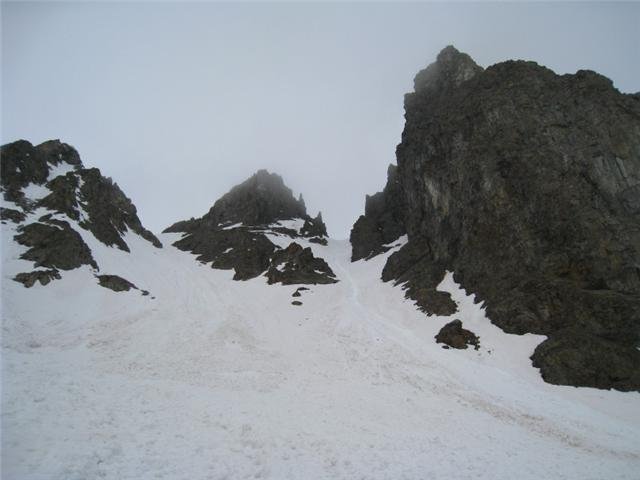 The two snow climbs we did. 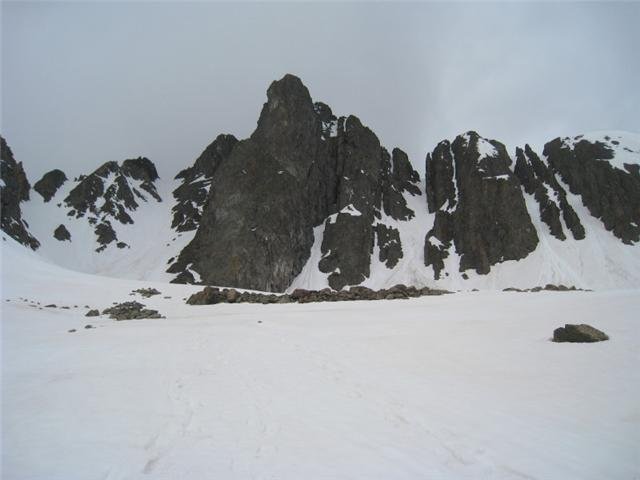