I had wanted to climb the Keyhole Ridge on Longs Peak for quite some time, so Jeff and I decided to make an attempt.  I got up at 1:45, and we left Highlands Ranch, Colorado, within a half an hour.  Jeff made good time on the drive to the trailhead and we were hiking at 4:00.  It was a Saturday in July shortly after the rating of the Keyhole Route went non-technical.  As expected, the parking lot was full and we didn't even drive up to make sure; we simply parked on the road at the first convenient location.  The hike in was uneventful, and we took a break at the Jims Grove trail junction and the Boulder Field.  By the time we got to the Boulder Field I wasn't feeling that strong, so I checked my blood sugar level which was low.  I ate some food to recover and we continued up to the Keyhole.  Unfortunately, continued to feel poorly.

I ate some more food after getting another low blood sugar level reading.  I was still feeling poor when we got to the base of the first pitch, but we geared up and I headed out anyway.  Jeff had already lead the route, so he let me have the sharp end of the rope for the entire climb.  I used the entire rope on the first pitch making it to within approximately 40' of the top of the large fin/tower on the ridge.  There are several options for climbing, and I stayed on the east side of the tower for the duration of the pitch.  I brought Jeff up to my anchor which I had built in a wide chimney.  We climbed this wide chimney and then traversed slightly left to a flake that takes you to the summit of the second fin/tower.  This was a short pitch, but I could not continue because of the excessive rope drag.  Unfortunately, my blood sugar had increased significantly by now and I took some insulin at this point.

It is not possible to easily climb up and down the ridge proper of the fin, so we essentially ended up traversing up the left side ridge, crossing over the top of the tower, and then down climbing back to the ledges on the west side of the rock formation.  For the third pitch, I down climbed from the tower to wide easy ledges and made my way up some low angled slabby ramps that lead to the final technical pitch of the climb.  Approximately half way up the ramp, we ran out of rope and simul-climbed a short way to the base of pitch four.  Although my blood was high, I was feeling better by now and really enjoying the day.  The weather was holding out despite a few sprinkles and the climbing was relatively easy.  The options on where to climb on the fourth pitch are fairly wide.  The climbing eased up fairly quickly on the pitch, so I stayed right and climbed a chimney back to the ridge to keep it interesting.

I brought Jeff up and switched over to my trail running shoes.  Since Jeff didn't plan on leading anything, he didn't even bring rock shoes with for the climb.  As we climbed the Keyhole Ridge we watched a line of people ascending the Trough.  Jeff warned me not to let my guard down once the technical climbing was over because there is a fair amount of scrambling to reach the actual summit.  Although I could see the top of the Trough and roughly estimate the distance to the summit, I prepared myself for 600' of scrambling.  Because of this, the final few hundred feet to the top didn't seem bad and before we knew it we were enjoying the summit in the sun.

Since the North Face still had plenty of snow on it and we did not want to bring crampons or an axe, we had conceded to going down the Keyhole Route.  I can honestly say I was more concerned about descending the Homestretch with hoards of people on it than climbing the Keyhole Ridge.  In fact, I witnessed a woman stumble and almost take a big fall on the Homestretch.  Our descent went fine, but it is difficult to pass in a few sections where the route tends to bottleneck.  After getting to the Boulder Field, it was iPod and cruise control time.  We ended up climbing the route with a car-to-car time of 9 hours and 45 minutes.  This was my eighth summit of Longs Peak by the seventh route. 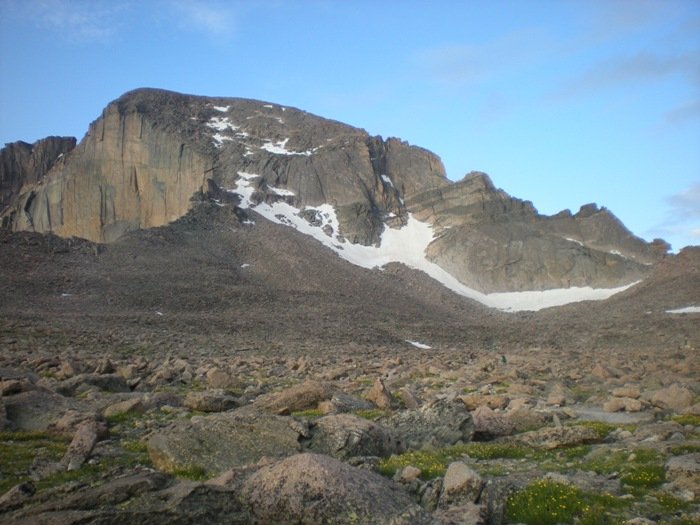 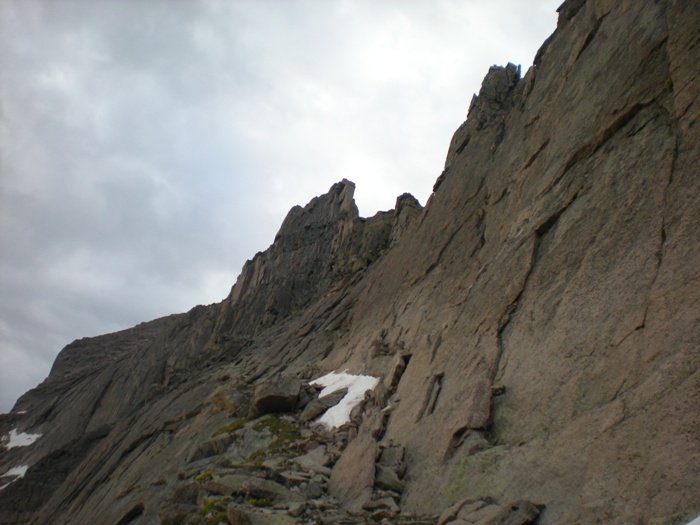 The ramp leading away from the Keyhole. 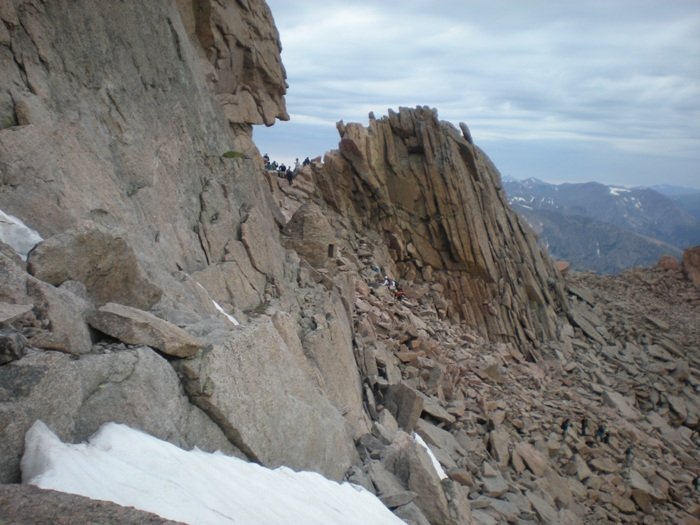 Lots of hikers near the Keyhole. 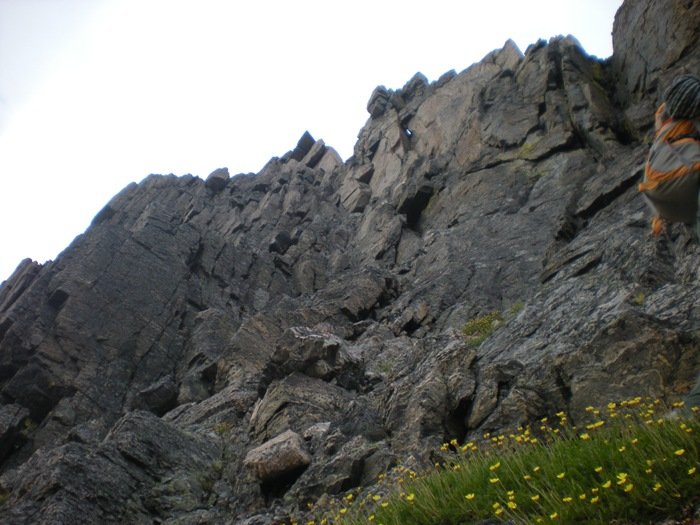 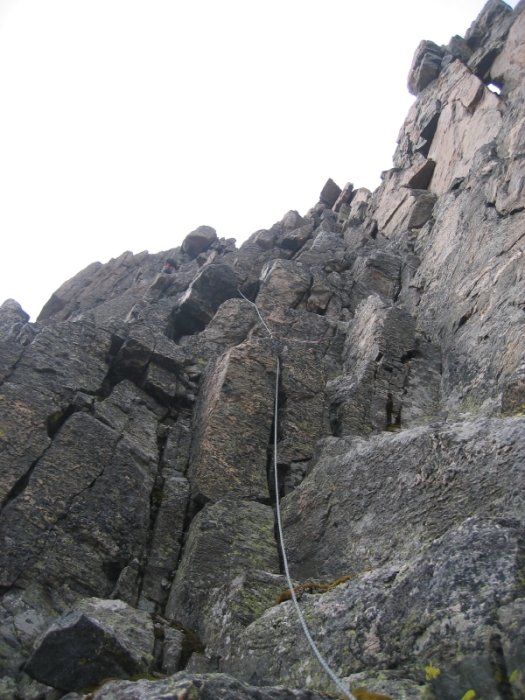 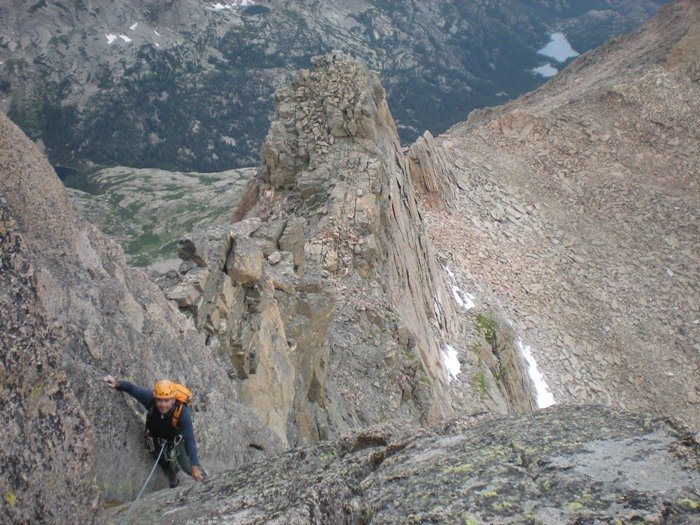 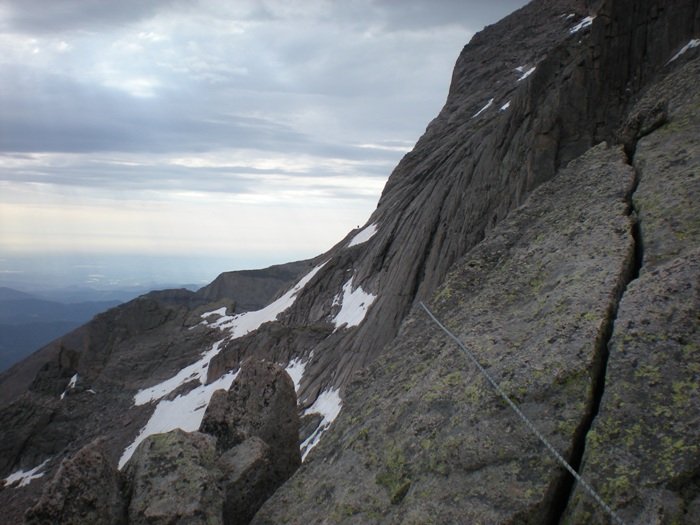 Climber on the north face route. 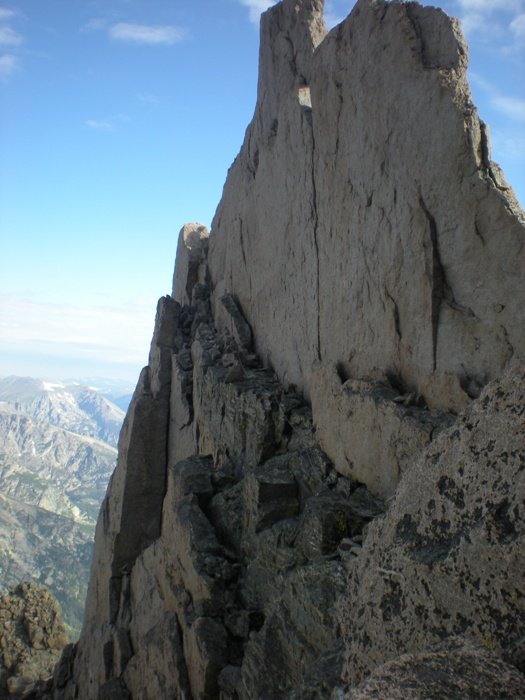 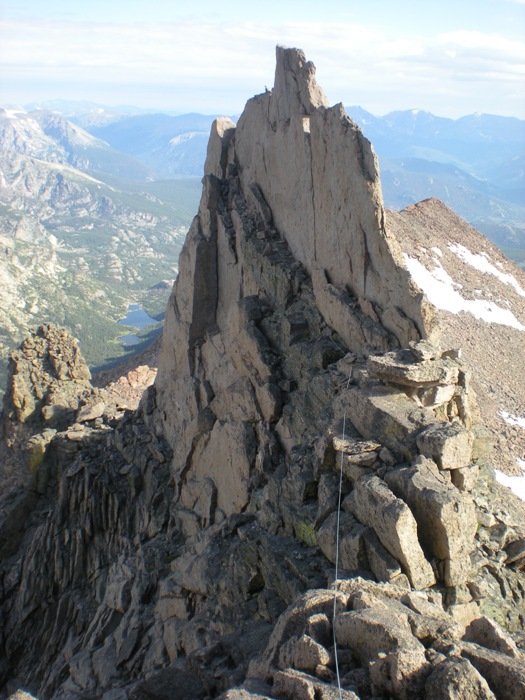 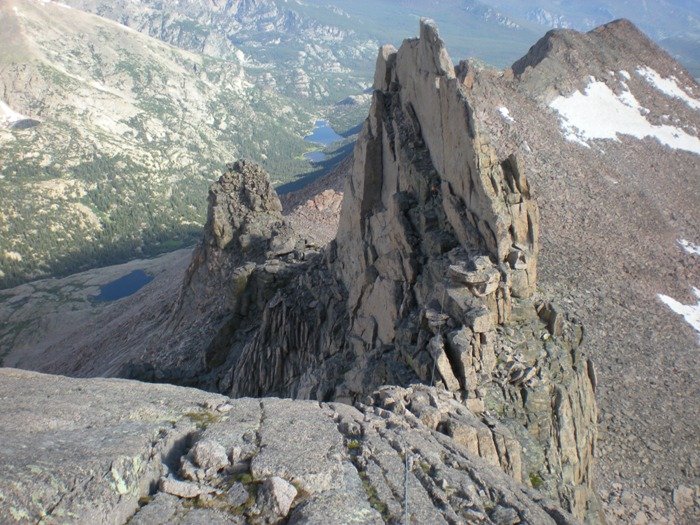 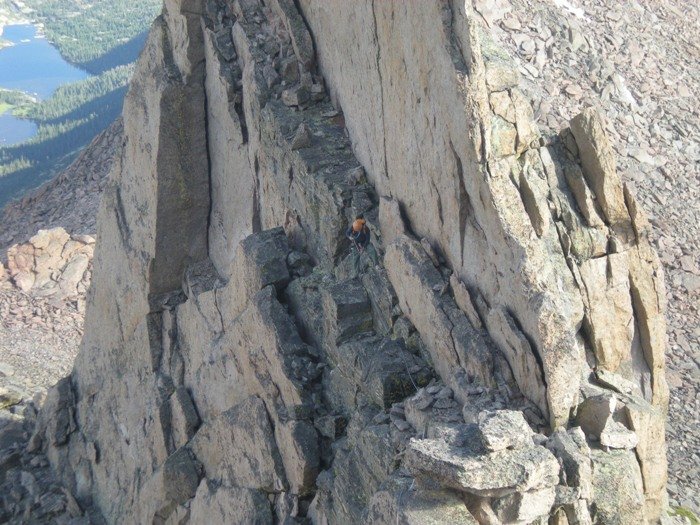 Jeff traversing to the final pitch. 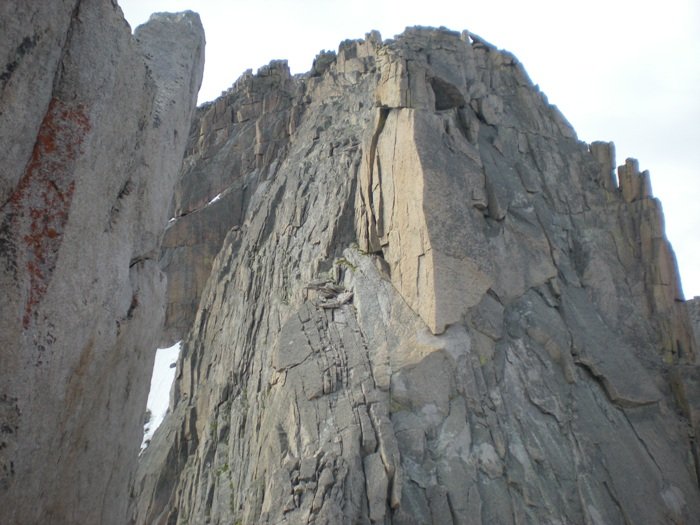 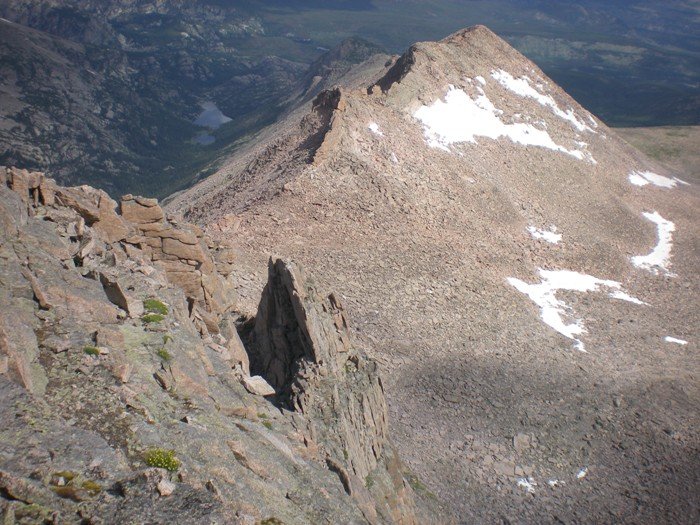 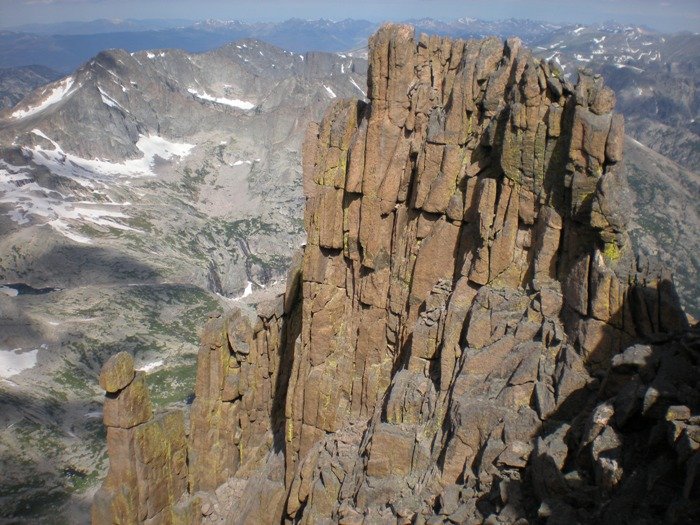 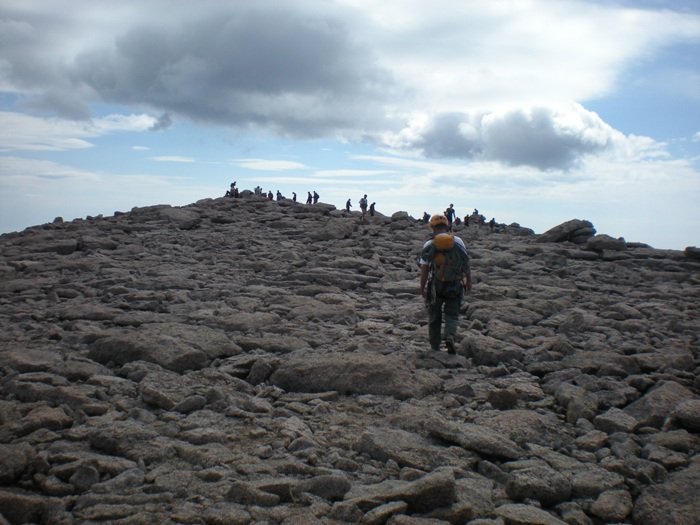 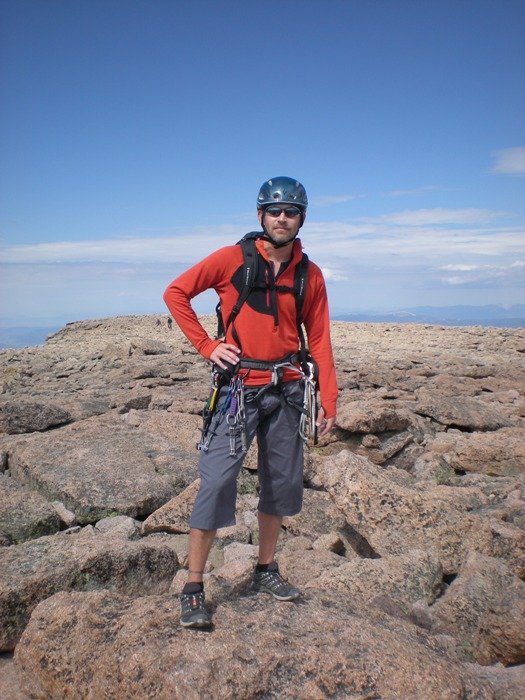 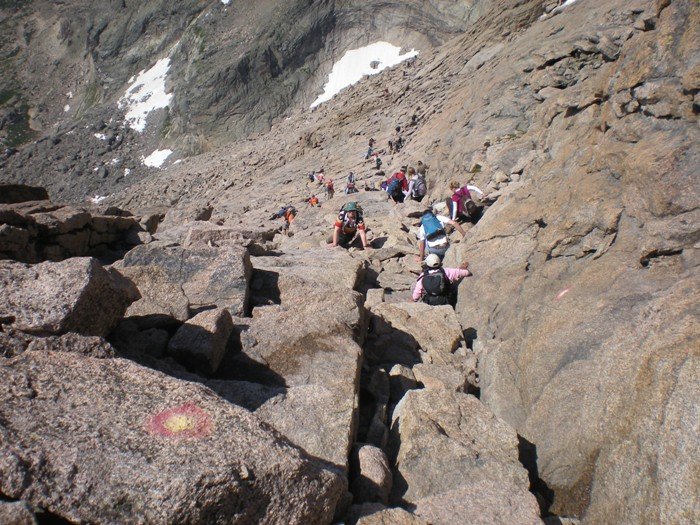 The descent down the Homestretch. 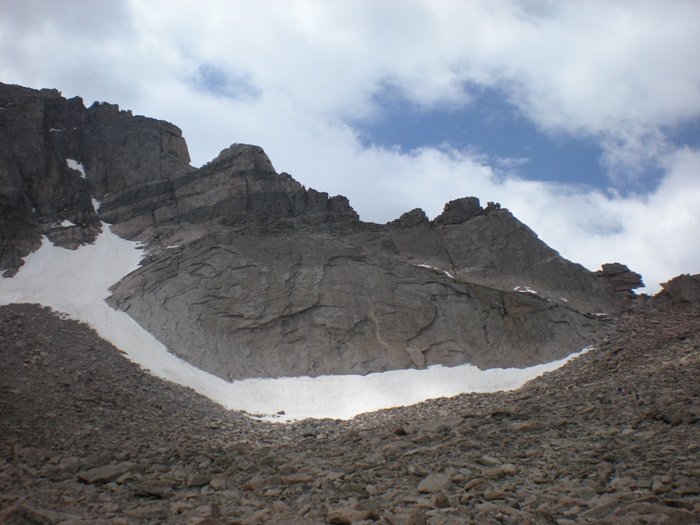