Jeff only had three mountains left to climb in order to complete the Colorado 14ers, so we went down to the southern Sangre de Cristo Range in an attempt to summit his remaining peaks.  Our original plan was to climb the northwest face of Little Bear Peak, complete the traverse to Blanca Peak, and then pick up Ellingwood Point on the way out.  It would have been a big day, but getting all three peak in one trip up to the basin made sense to us.  It rained for much of the night prior to our attempt which was a preface for things to come the next day.

We got up at 3:00 from around 8,800' on the Lake Como Road and were hiking by 3:30 after a quick breakfast.  We couldn't see a star in the sky all morning.  Jeff set a strong pace and I eventually reined had him to slow to my speed.  The hike to Lake Como went quickly and we soon found ourselves at the base of the northwest face of Little Bear Peak.  The tops of the surrounding peaks were socked in and the weather looked dismal.  We quickly conclude that Little Bear Peak is out of the question as neither of us want to climb wet class 4 rock.  We decided to hike the standard routes of Ellingwood Point and Blanca Peak and try and salvage the day.

Approximately 30 minutes after our decision to abort the northwest face of Little Bear it began to rain.  The slight drizzle wasn't a big deal and we continued up the basin.  By the time we got to Crater Lake, the precipitation had intensified so we decided to take a break in the mine shaft around 13,000'.  We sat in the cave for over an hour hoping the weather would lift; however, it continued to alternate between rain, sleet, and snow the entire time.  We grew colder and had to make a decision.  Although we both had rain jackets, Jeff had rain pants while I only had an additional base layer of tights which weren't as effective in the rain.

We ventured back into the fog and clouds.  Visibility was limited, so I was relying on my experience from my previous climb of Ellingwood Point exactly five years earlier.  We gained the ridge and accidentally ended up on the south side of the prominent gash in the ridge between Ellingwood Point and Blanca Peak.  A quick down climb had us back on route and ascending the ridge of wet and icy rock to the summit of Ellingwood Point.  We both were warm from the hiking and Jeff remained relatively dry while my legs were definitely wet.  The summit visit was short and we worked our way back down to the saddle between the two peaks.

In both of our minds, we had already made the decision to summit Blanca Peak too since the ascent of Ellingwood Point wasn't as bad as expected.  Since we were going to opposite direction, I was fortunate enough to get the other side of my body soaked and by the time we hit the summit I felt drenched.  We stayed for a quick picture and started back down.  A rapid drop in temperatures would have meant trouble for me.  We quickly worked our way down the ridge and back to the mine shaft we had visited earlier in the morning.  Although we were wet, we decided to take a quick break and try and dry out some.  We changed what little extra clothing we had and refueled with food and water.

Fortunately for us, when we left the cave for the second time of the day the rain actually started to let up.  Jeff and I started to dry on the hike out we were able to see the basin a bit more.  We ran into a few people near Lake Como, but it was apparent to us that most people stayed in their tents all morning.  The hike out was uneventful, but we did run into a some luck.  About two miles from our camp spot, we ran into a couple of brothers on four wheelers.  Jeff didn't hesitate at all to ask them for a ride down which they quickly agreed to.  After arriving back at camp, we took a nap and then had a hearty dinner of spaghetti and mashed potatoes.  We didn't have many views to enjoy during the day, but we persevered and met the challenge of mother nature.  Jeff had only one 14er to go. 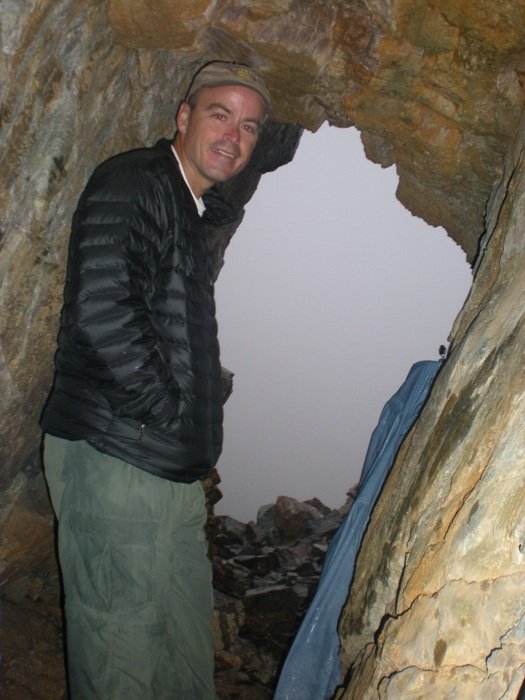 Waiting out the rain in the cave. 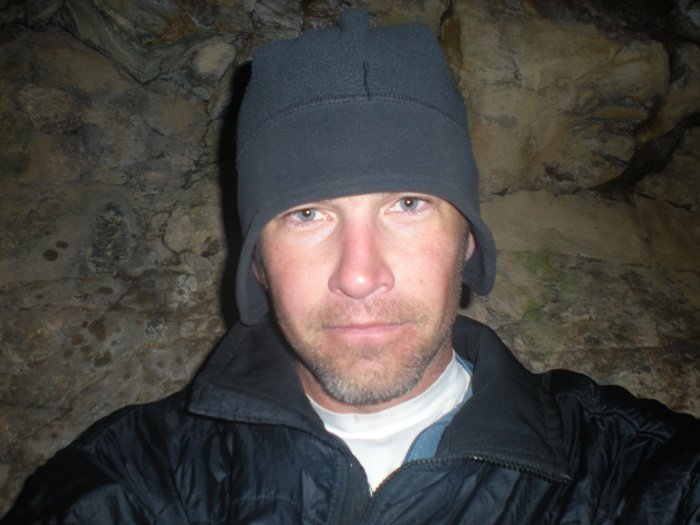 Sitting in the mine shaft. 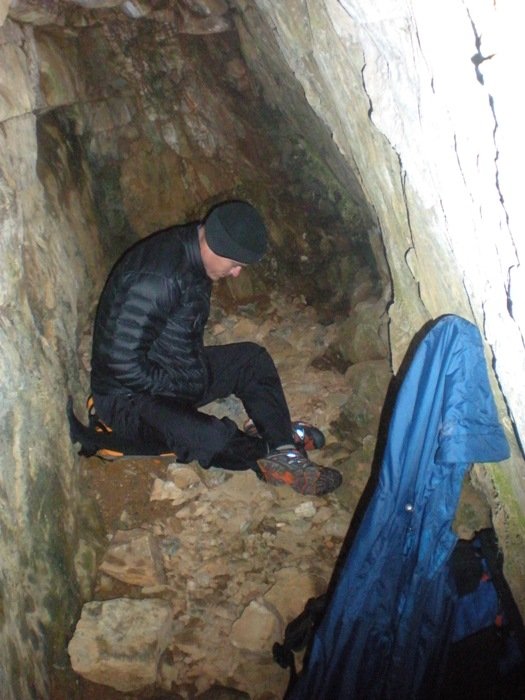 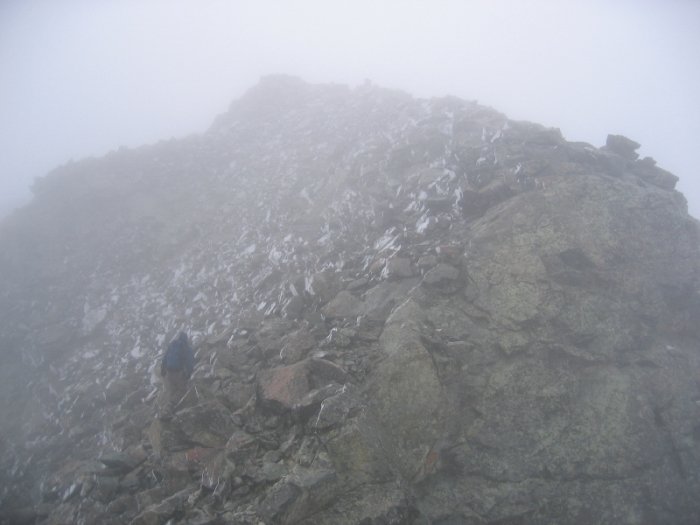 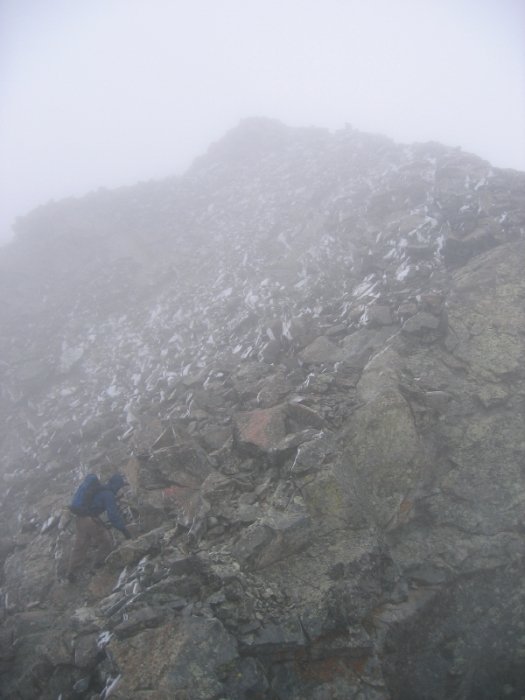 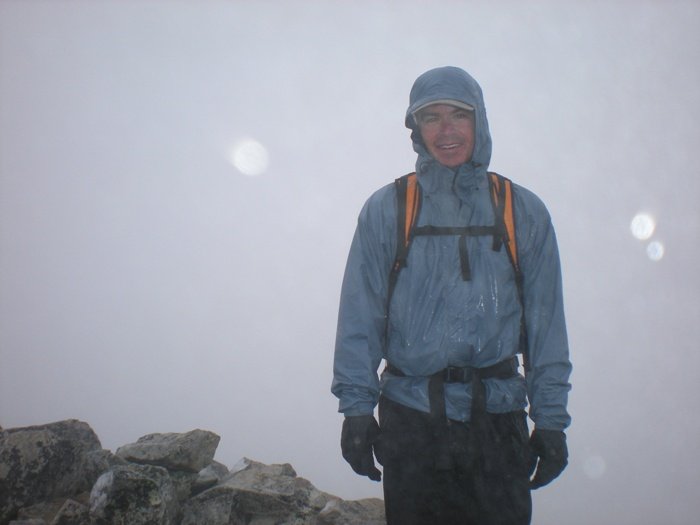 Jeff on the summit of Ellingwood Point. 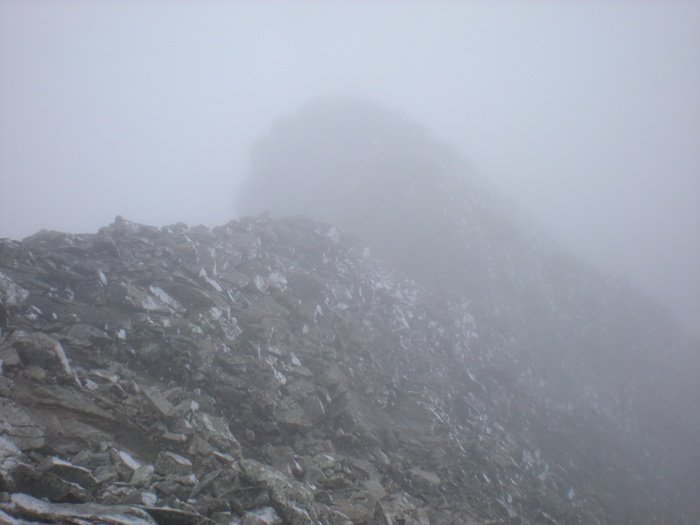 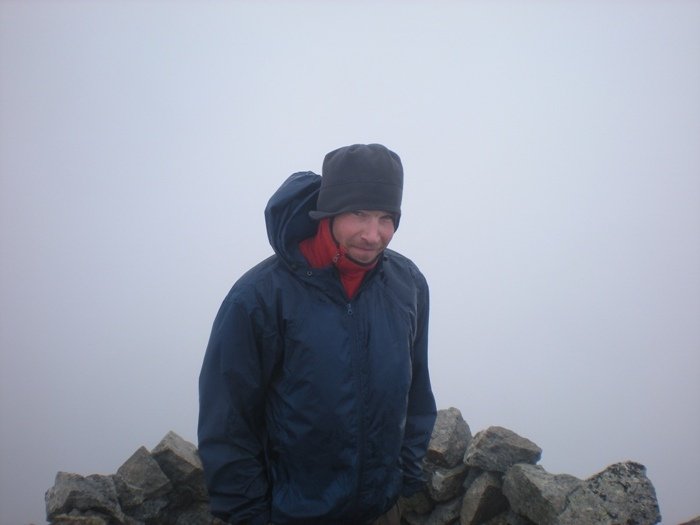 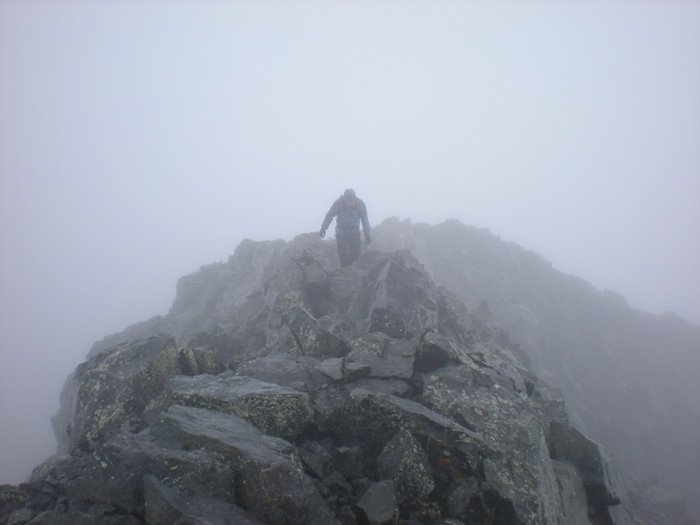 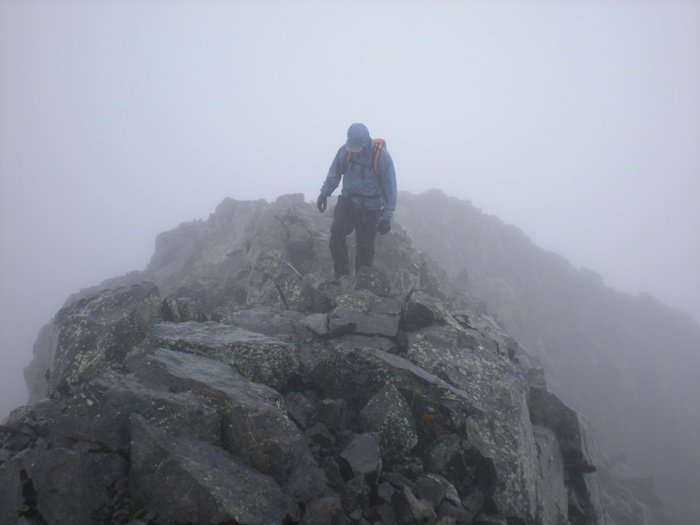 Jeff nearing the summit of his second to last 14er.