After climbing this route a couple of weeks ago, two friends of mine wanted to give it a shot.  Mark found another partner so although we all went up together we ended up climbing as two teams of two.  Scott and I hadn't been out together since the middle of June.  We didn't leave the Glacier Gorge trailhead until 8:00, but we made good time to the base of the route.  There was less ice than just 10 days ago despite a small storm that came through the Front Range the previous weekend.  The weather conditions for the day were acceptable; however, several times throughout the day a blanket of spindrift would flow down the mountain.  It literally looked like a waterfall over the entire route.  When a wave began, we all threw our hoods up, ducked our heads, and waited for the snow flow to subside.

John led the first pitch with Mark following and then Scott led behind him.  By the time I got to the first belay station, John started leading the second pitch and opted for a harder line to the left.  Since I knew I was heading right, I started up before Mark left the anchor.  I climbed the same line I previously did with less ice.  I extended my pro to help with rope drag.  Mark started up behind John as I built an anchor and prepared to bring Scott up.  Scott reached my belay station shortly after Mark reached John.  Scott lead the third snow pitch on the route.

John and Mark got into some difficult terrain and decided to bail after a couple of attempts to progress their route.  Scott brought me up and I started up the final pitch.  The bottom half of the route was relatively fun and easy; however, the ice thickness on the upper right part of the pitch was much thinner and didn't appear as though it would take screws.  I climbed left into a narrow off-width chimney and was able to get a great piece of rock gear in.  I then got two good sticks in high to the right of the chimney.  I swung out on the tools and carefully worked my feet up on the thin ice and rock wall on the left.  After establishing a relatively stable position, I was able to move my tools up again and then get on much easier snow-climbing terrain above the technical section of the pitch.

Scott followed the pitch but was unable to climb up the chimney because of snow and spindrift funneling down into it.  He ended up climbing the thin ice on the upper right part of the pitch because of spindrift.  When he finally got up to me, he indicated that the running snow didn't seem to quit and was like a constant mini avalanche.  The descent went smoothly and when we got back to Mills Lake, Mark and John had just arrived from a quick jaunt up to check out the Jewel Lake ice.  Mark also showed us his helmet that was dented from a piece of ice that hit him while on rappel below us.  We hiked out and returned to the car just before dark at 5:00. 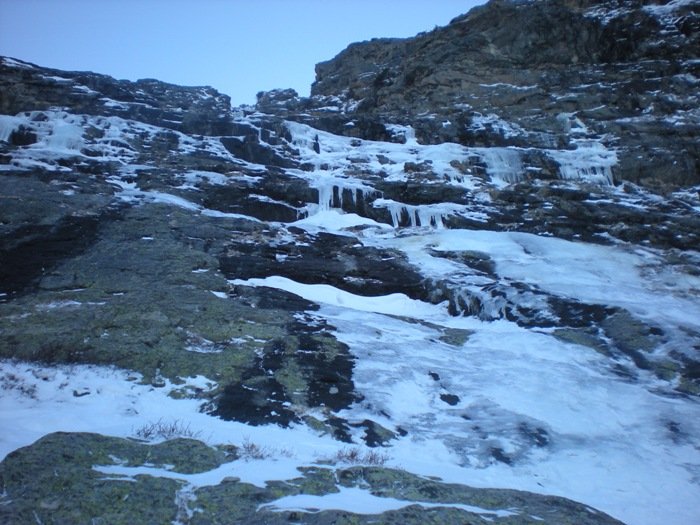 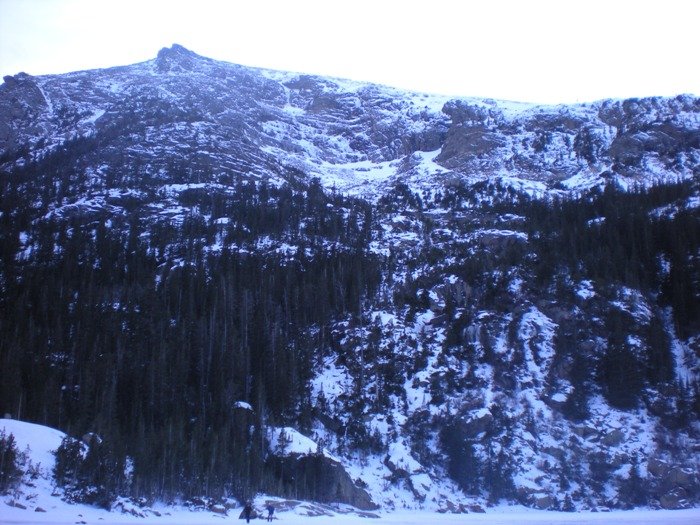 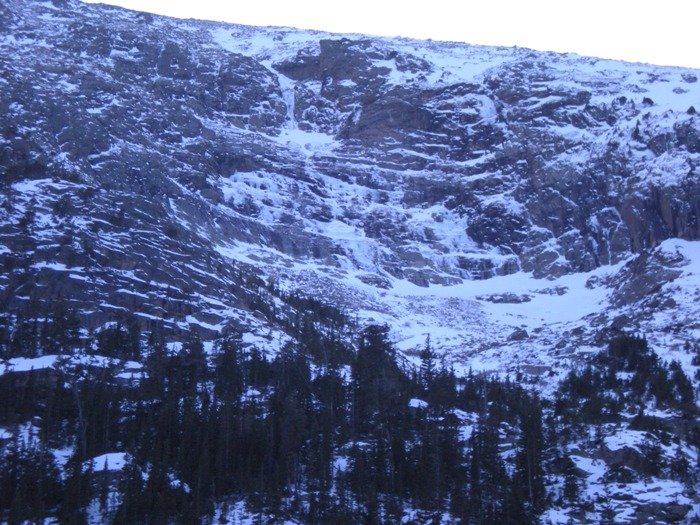