We couldn't resist the temptation to swing the ice tools again after a recently published trip report on the Flying Dutchman, so Brian, Jeff, and myself decided to check it out.  Although my initial thoughts were simply to climb the route, Jeff suggested we continue to the summit if the weather permitted.  This ended up being my 6th summit of Longs Peak by the 5th route.  There is obviously a fairly long approach for very little ice climbing, but as previously mentioned we felt like getting our tools out, we knew the ice was in, Brian and I hadn't climbed the Flying Dutchman Couloir, and none of us had done the Clarks Arrow route.

We left the trailhead around 4:45 and essentially ended up hiking to the base of climb separately after spreading out early in the hike.  It took us roughly 2 hours and 45 minutes to reach the snow in the Flying Dutchman couloir.  The hike in went well and the scramble around Chasm Lake wasn't difficult.  We geared up next to another party of two who started up the snow right before us but without crampons.  They stopped again a short way up the snow to put on their crampons so we passed them and made our way to the base of the ice.  They made it to the ice behind us and decided to free-solo the pitch, so we let them go ahead assuming it wouldn't take them long.  We quickly learned that one of the individuals had never ice climbed before.  Approximately 25 feet up the ice he nearly peeled off and took the express descent down the Flying Dutchman.  One tool and a foot placement blew out, and he quickly found himself belly down on the ice.  Fortunately, he caught himself and finished the climb.

The three of us made quick work of the short pitch using the conventional technique of ice screw protection, ropes, and belaying.  We scrambled up to the Loft and saw the sun reflecting on some climbable ice below it.  We hiked across the Loft to the beginning of the Clarks Arrow route and quickly dropped approximately 150-200 feet.  At this point, we began scrambling back north with none of us feeling particularly strong.  We took a short break after starting the ascent, and another below the Notch.  We then continued traversing to the base of the Homestretch and topped out after 7 hours and 25 minutes.

The wind was only occasionally annoying and we all commented on the beautiful October day we were having.  After refueling and hanging out the summit for 30 minutes, we quickly descended the North Face where we rappelled and scrambled down to the Boulder Field.  The technical pitches of the North Face appeared to be in good mixed climbing conditions.  We took a short break to remove a layer and take a quick drink of water.  We had limited discussion on the descent since the three of us were all listening to our iPods and focusing on the hike back to the trailhead.  It ended up being an 11 hour and 30 minute car-to-car hike. 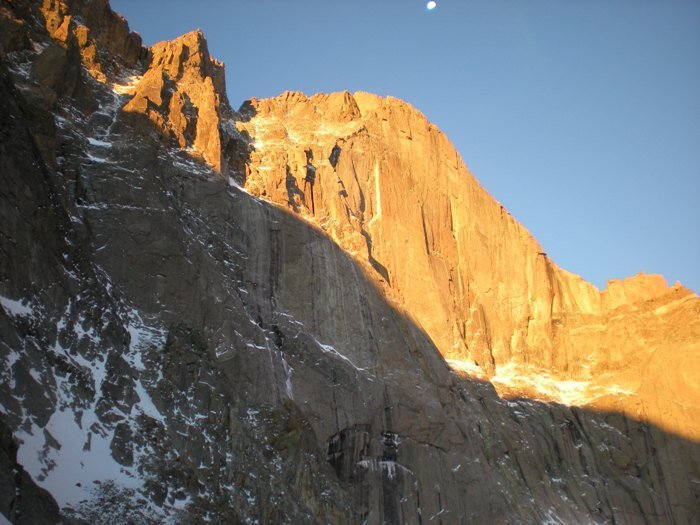 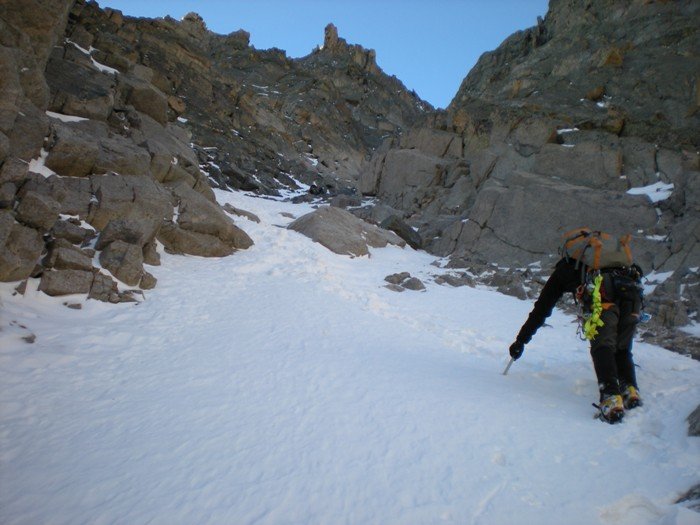 Jeff starting up the Flying Dutchman. 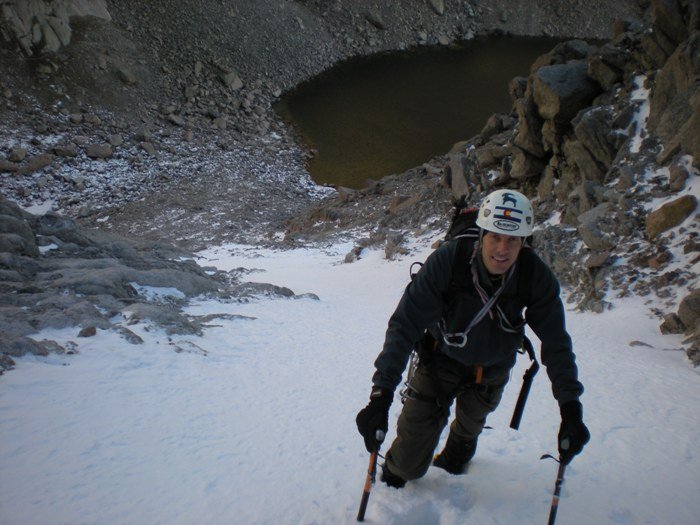 Brian with Chasm Lake below. 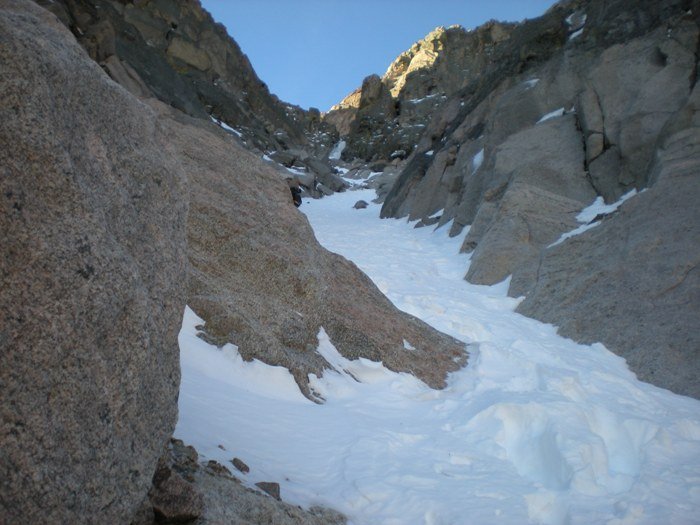 Our first look at the short ice pitch of the climb. 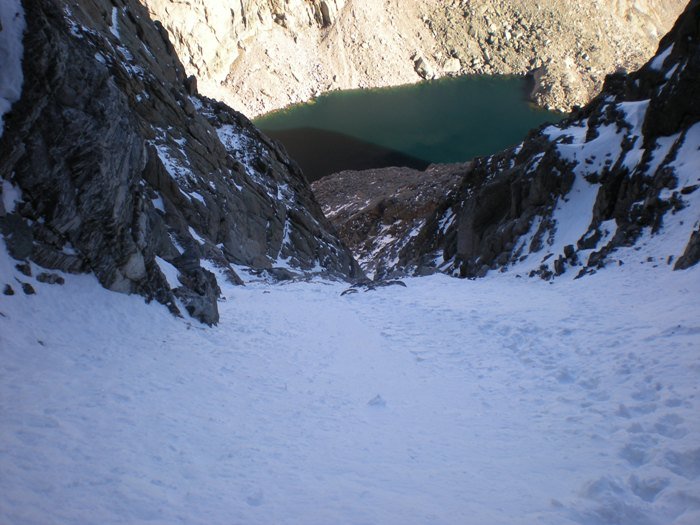 Looking down the Flying Dutchman. 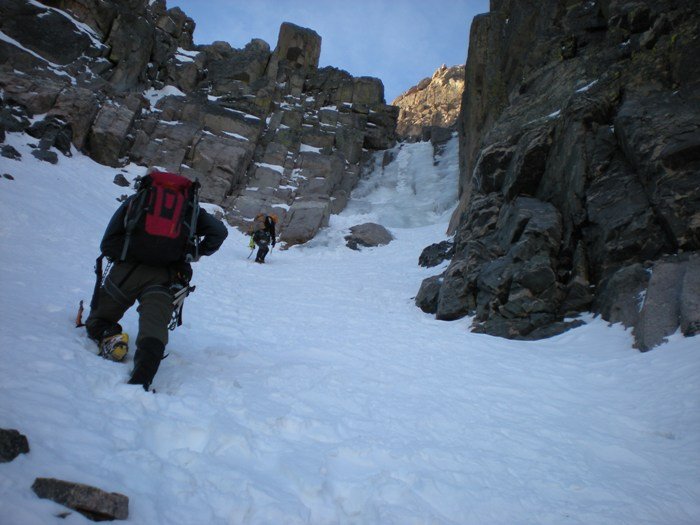 Approaching the base of the ice. 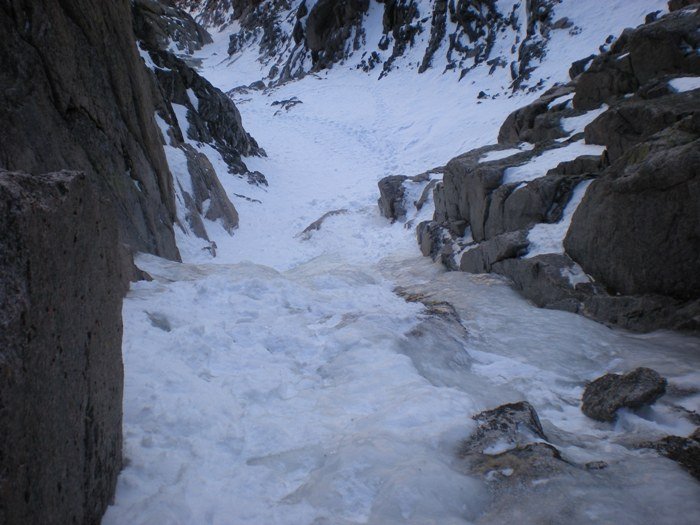 Looking down the short ice pitch. 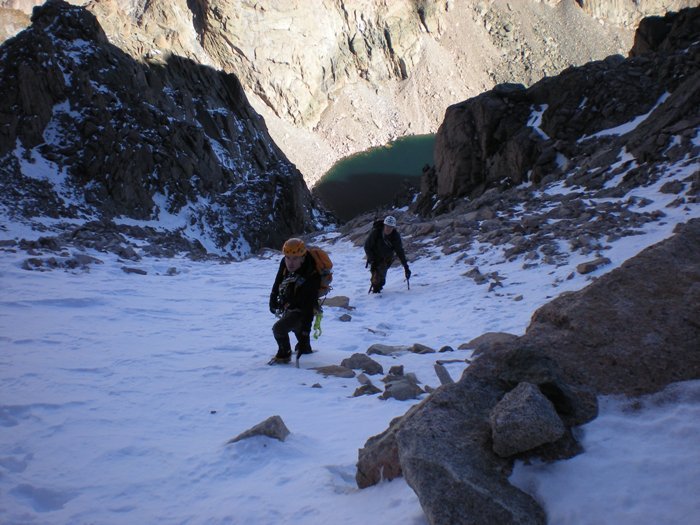 Jeff and Brian scrambling to the Loft. 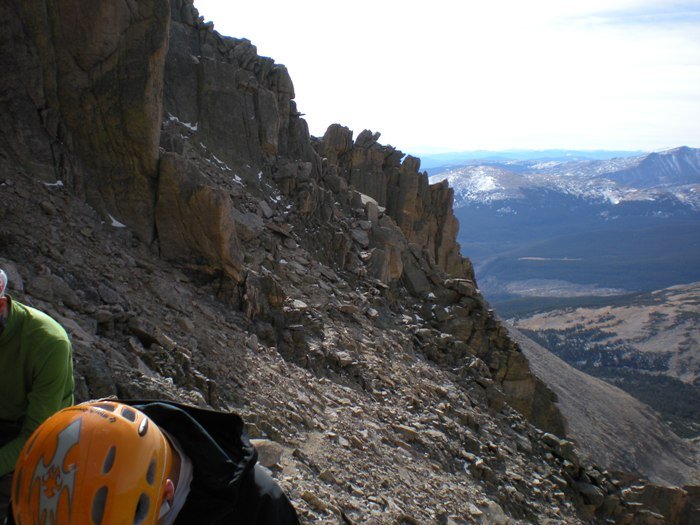 Looking down the Clarks Arrow route shortly after we started ascending. 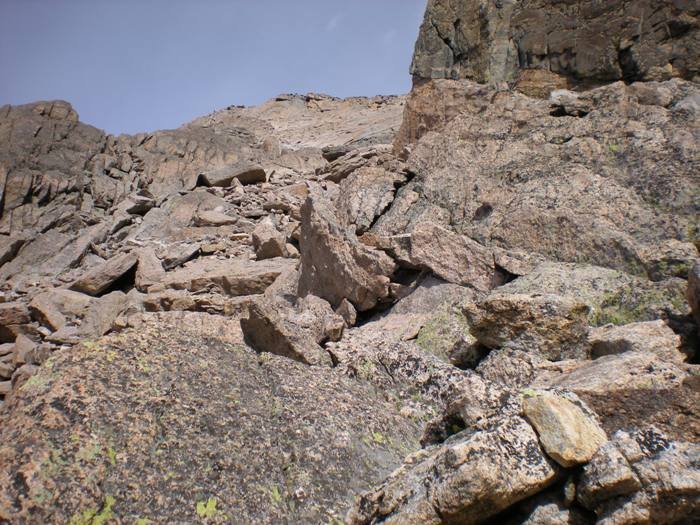 Looking up the Clarks Arrow route. 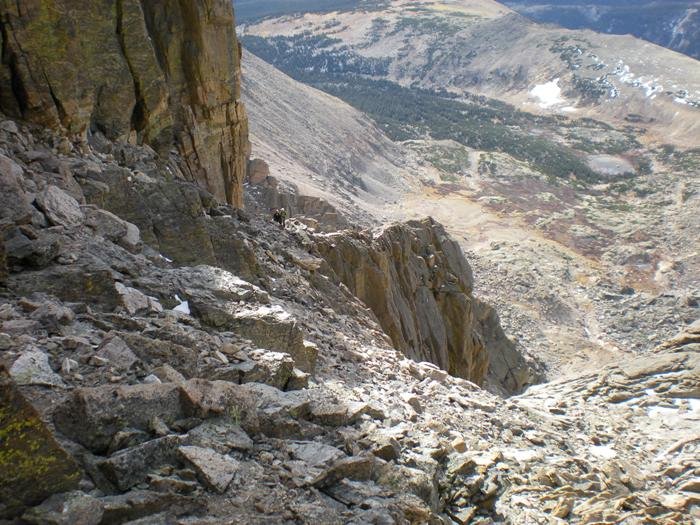 Jeff and Brian hiking up the Clarks Arrow route. 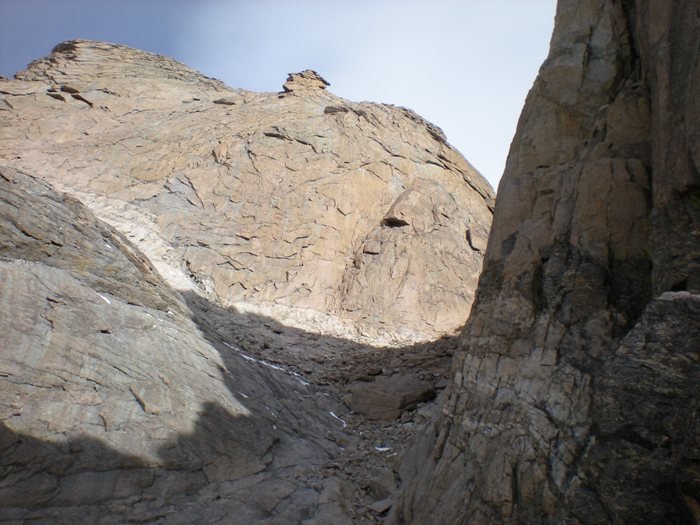 A left to the Homestretch and a right to the Notch. 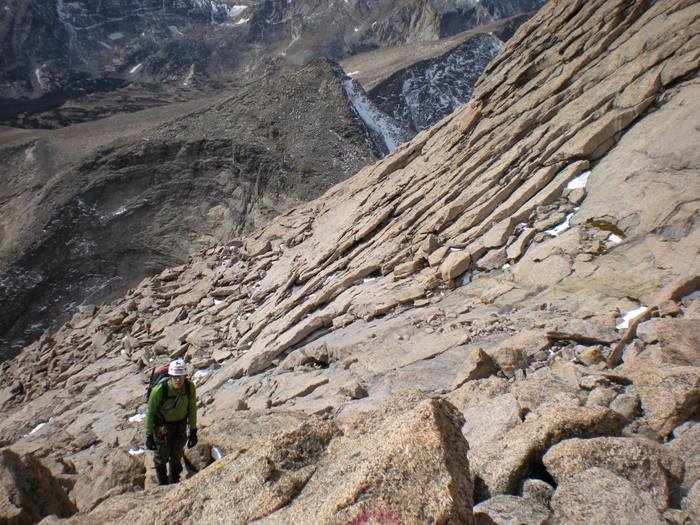 Brian on the Homestretch. 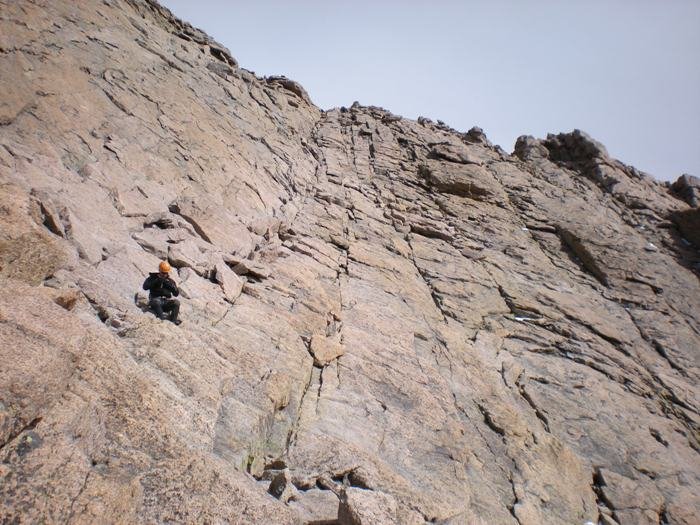 Jeff on the Homestretch. 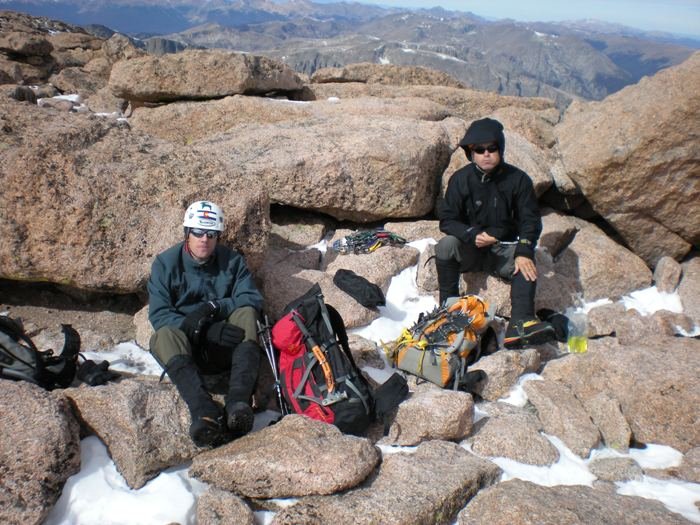 Brian and Jeff on the summit. 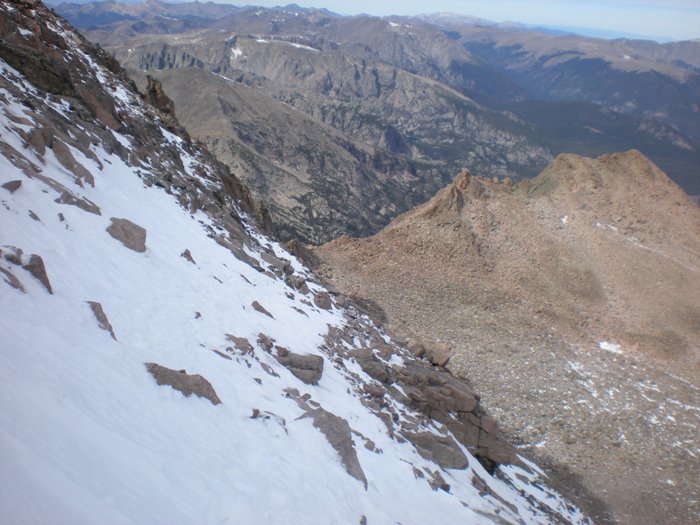 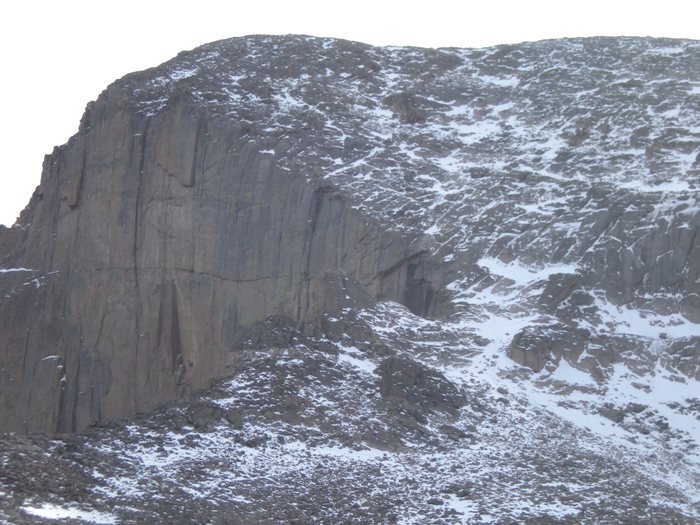