This was my fifth summit of Longs Peak by the fourth route.  Kieners has been on my short list for a while so I was excited to attempt this climb.  The trip came together at the last minute after I bailed on a friend to hike Saturday.  When the dust settled, the team consisted of James, Jeff, and John.  Although Longs Peak and the Boulder Field received 5 to 7 inches of snow on Thursday night, Jeff was confident that the route would go.

I slept in until 2:00 before grabbing my gear and riding bike over to Jeff’s house.  We picked up John on the way and were hiking from the Longs Peak Trailhead by 4:20.  As Jeff signed in at the trailhead register, another climber told us we should have an “interesting climb” given the recent moisture the area received.  He was going to attempt the North Face.  Although I didn’t say anything, I certainly thought the east side of the mountain would prove to be much easier than the snowy and icy north side.

I struggled with my blood sugar levels all day and started off with high readings.  After about an hour, I was extremely low and it was time for a break near the Jims Grove trail junction anyway.  We refueled and continued to Chasm Junction.  I was still feeling poor as my sugars remained low, and to top it all off I dropped my hat.  Jeff offered to go back and get it which cost us 20 minutes.  I ate some more and we worked our way to the ranger hut, Chasm Lake, and the base of Lambs Slide.

The recent snow likely made climbing Lambs Slide slightly easier; however, there were sections of solid alpine ice near the top.  In hindsight, I should have made a greater effort to avoid the ice because you were relying solely on front points with an alpine axe unable to penetrate the ice.  Fortunately we made the exit to Broadway without incident, but John and Jeff had to wait for me a while because I was still moving slowly.  We scrambled up the first section of Broadway to the point where I have normally roped up for the traverse.  Not surprisingly, Broadway looked totally different from my first two experiences.  Although we did not rope up at this point, we did keep our crampons on for the remainder of the traverse due to a dusting of snow that remained on the ledges.

Jeff started the traverse and was quickly at the second prominent point on the route immediately before the infamous step around move.  John and I joined Jeff who then proceeded to climb under the protruding rock.  The first time I completed the traverse we didn’t even realize we made the crux move.  The second time, we did the high traverse and avoided the step around altogether.  Since I didn’t think it was too bad the first time, I decided to try it again.  I successfully completed the move, but it seemed harder and more alarming when not on a rope.  John also went around instead of under.  If I ever traverse Broadway again without a rope, I will be executing the belly crawl to get past the crux.

A bit more scrambling put us at the base of the Notch Couloir.  After previously seeing the couloir full of snow, it was a bit weird viewing it under the current conditions.  It actually looked somewhat menacing.  The crampons came in handy again since there was some snow at the base of the Notch we had to cross to get to the first pitch of the Kieners route.  The first half of the first pitch was dry and fun; however, as you entered the narrow confines of the chimney near the end of the first pitch, the snow didn’t melt and the rock was a bit icy.  Nevertheless, we all made it up the pitch and completed the short traverse over to the base of the second pitch.

The second pitch was completely dry and as equally fun as the first.  After climbing this section, we packed up the ropes for the day and started an excellent class 3/4 scramble to the summit.  This was definitely one of the more pleasing scrambles that I have done.  Jeff had completed this climb before, so route-finding was not an issue.  As we approached the apex of the Diamond, we encountered the large block steps where another less dramatic step around move is executed.  This is also where you essentially cross over to the North Face and have an easy scramble to the summit.

Jeff was recently on the North Face and not totally keen on descending this route again given the loose rock and fresh snow.  Climbers from the Keyhole Route indicated that the Homestretch and Trough were in generally acceptable conditions.  As a result, we collectively opted to go down the Keyhole Route instead of the North Face.  The descent wasn’t too bad, but I didn’t let my guard down and am never totally comfortable descending snowy/icy rock.  Jeff and John cruised down quickly.

The Narrows and Ledges traverses before and after the Trough were a piece of cake.  I bonked again at the Keyhole and needed to eat some more.  We regrouped and removed layers at the Boulder Field to prepare for the hike out.  Jeff and I donned our iPods to assist with the remaining miles.  We stuck together for the most part between the Boulder Field and Chasm Junction, but I had to work at keeping up with Jeff and John.  At Chasm Junction, Jeff and I peeled a base layer off our legs since we had really warmed up over the last hour.

I had recovered from my blood sugar low at the Keyhole and decided to try and make up some time since my partners were patient with my pace throughout the day.  I also felt much cooler after removing my running tights.  We made good time on the way out, and I was actually surprised at how fast we hiked out.  Not realizing it at the time, I ended up passing the guy who was going up the North Face.  I didn’t think to ask him how his day was, so I don't know if they completed the climb or not.  It took us 7 hours and 10 minutes to summit and 11 hours and 25 minutes round trip. 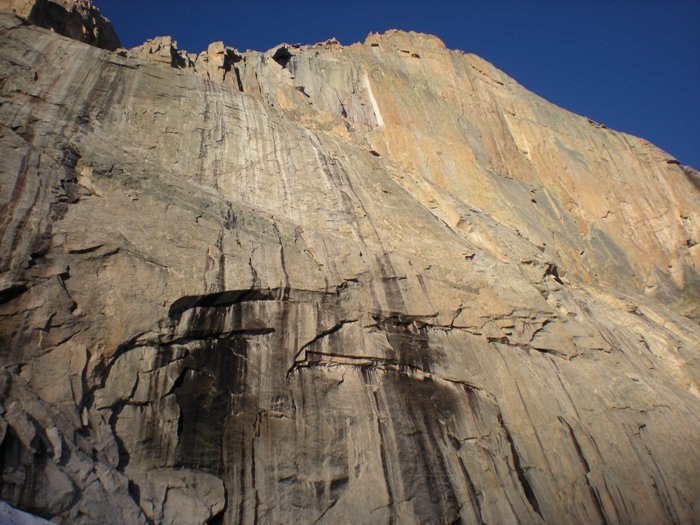 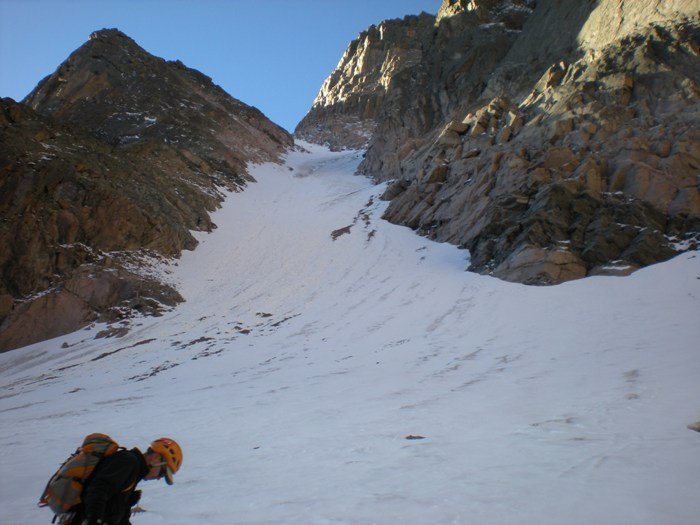 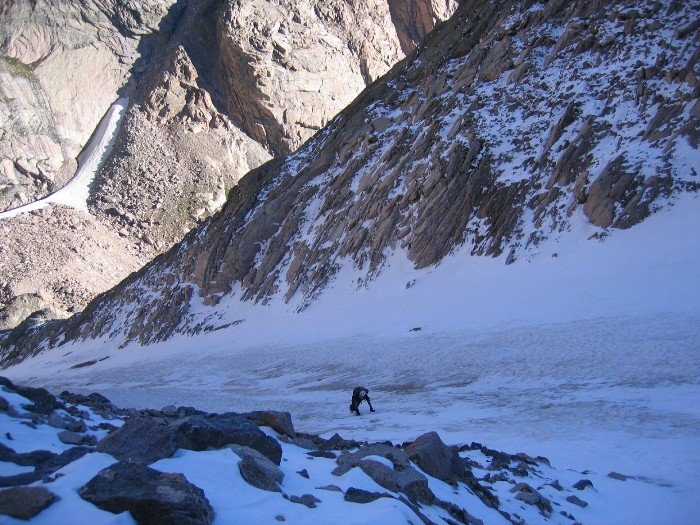 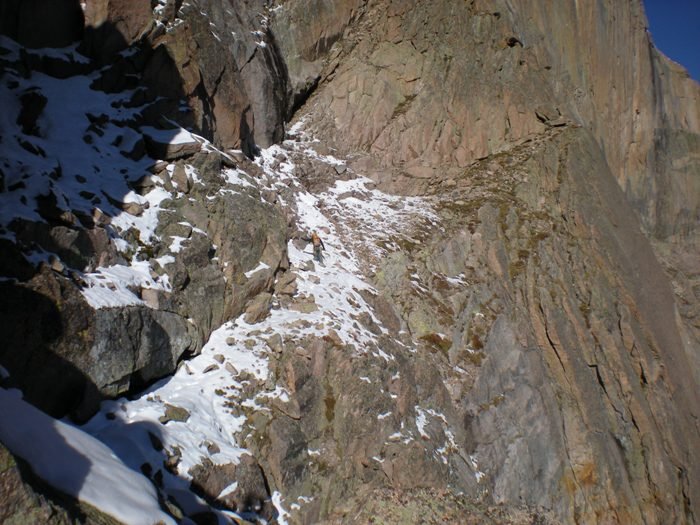 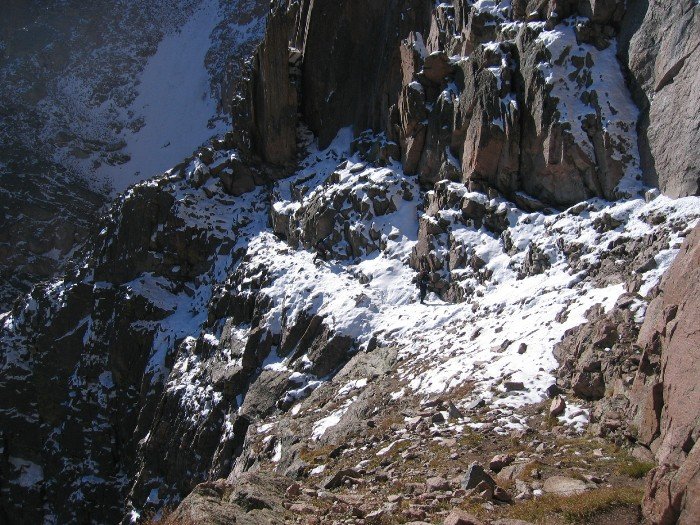 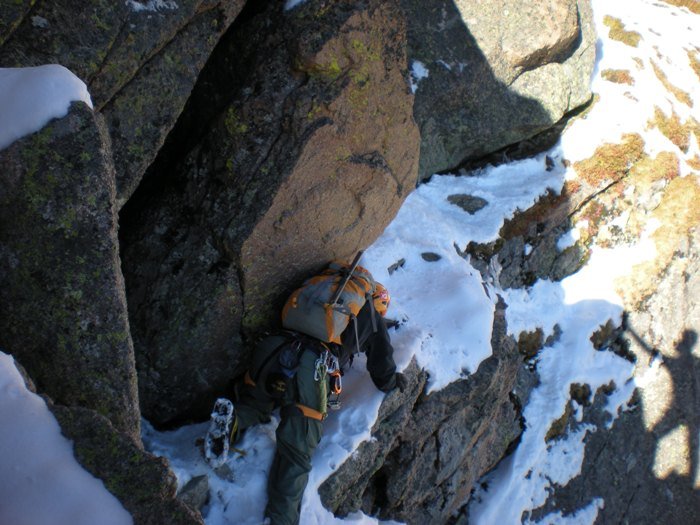 Jeff executing the step around move. 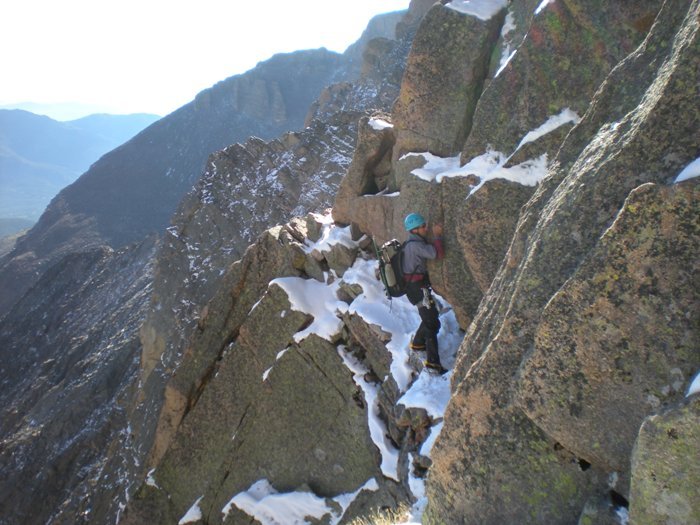 John executing the step around move. 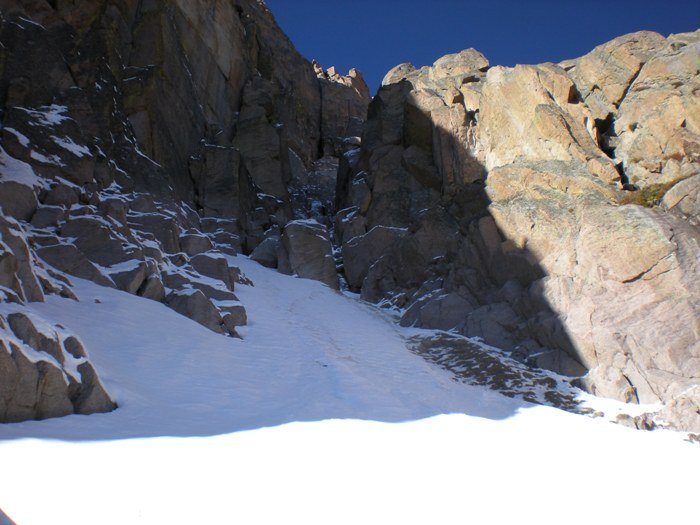 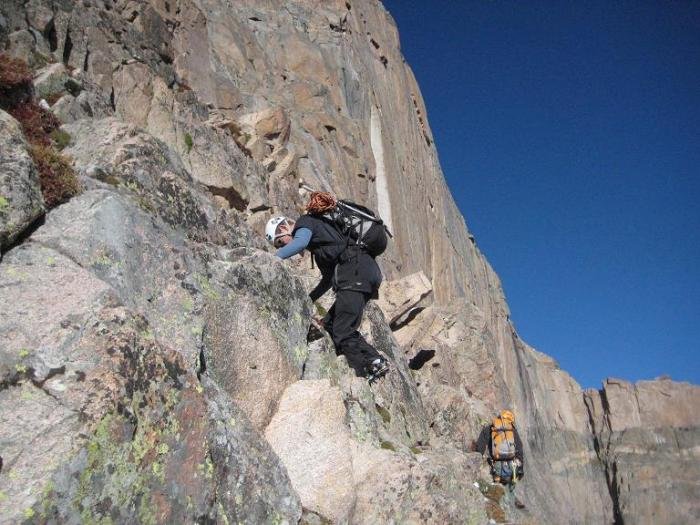 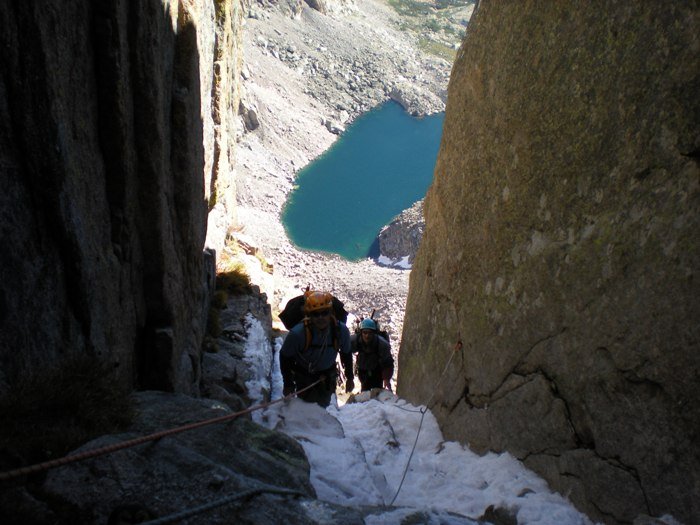 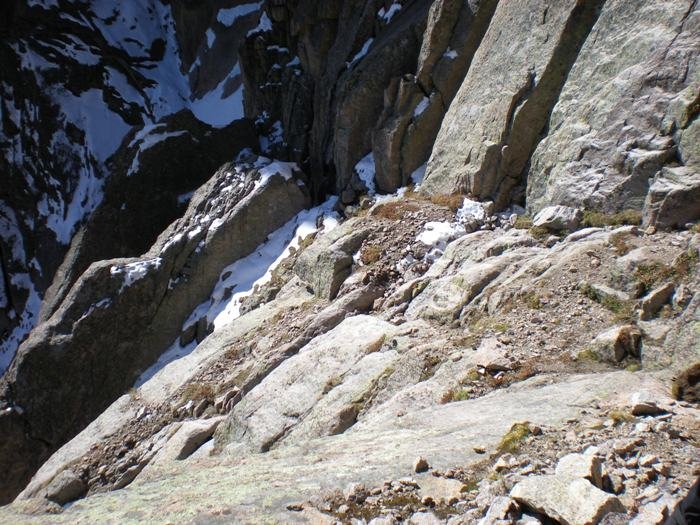 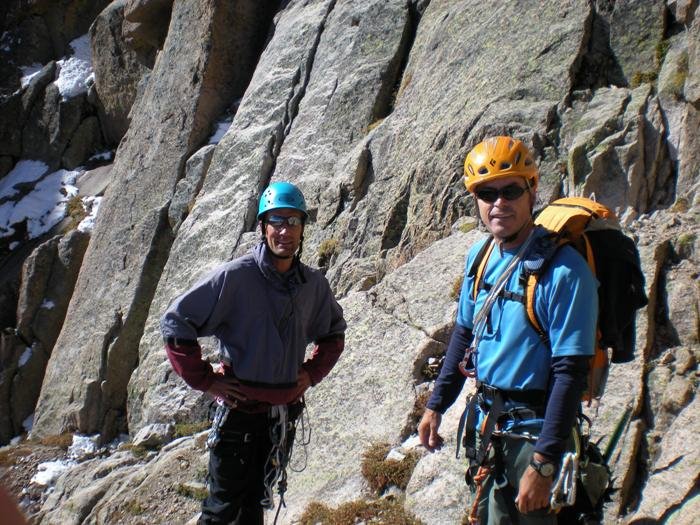 John and Jeff at the start of pitch 2. 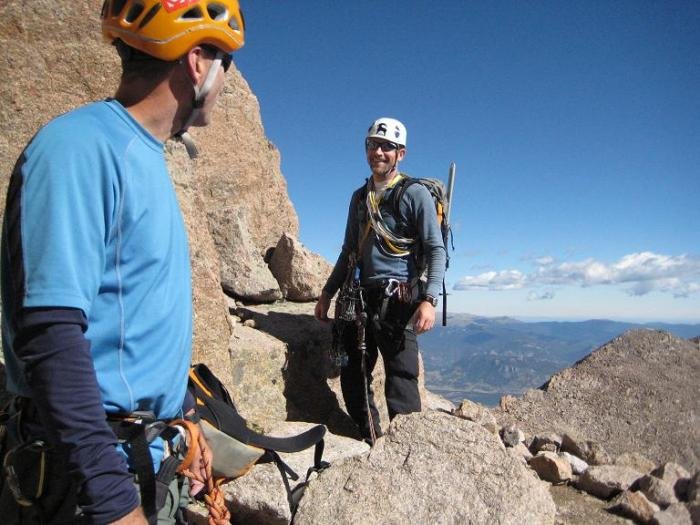 James at the start of pitch 2. 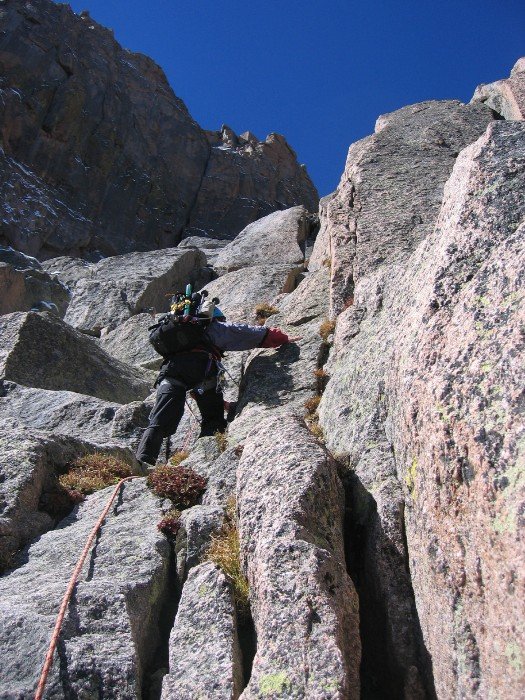 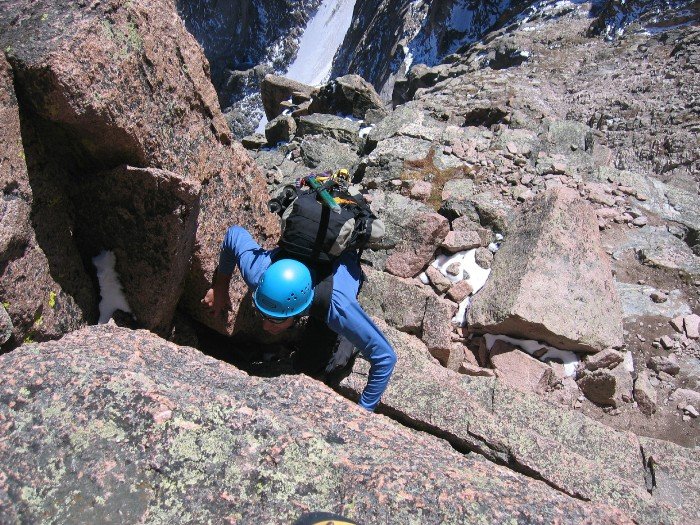 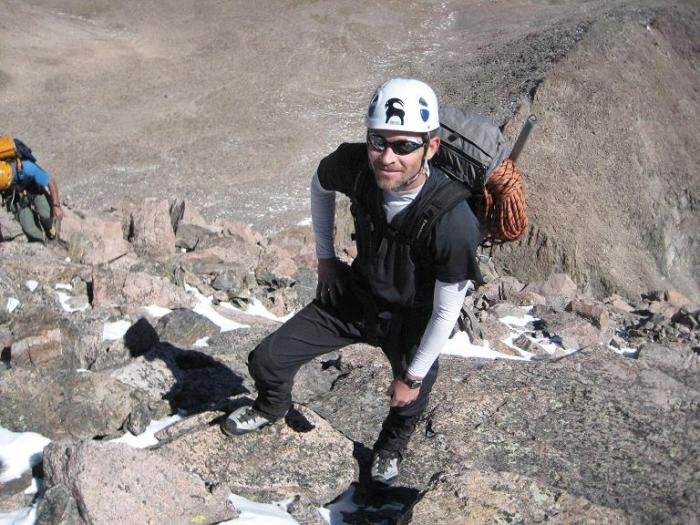 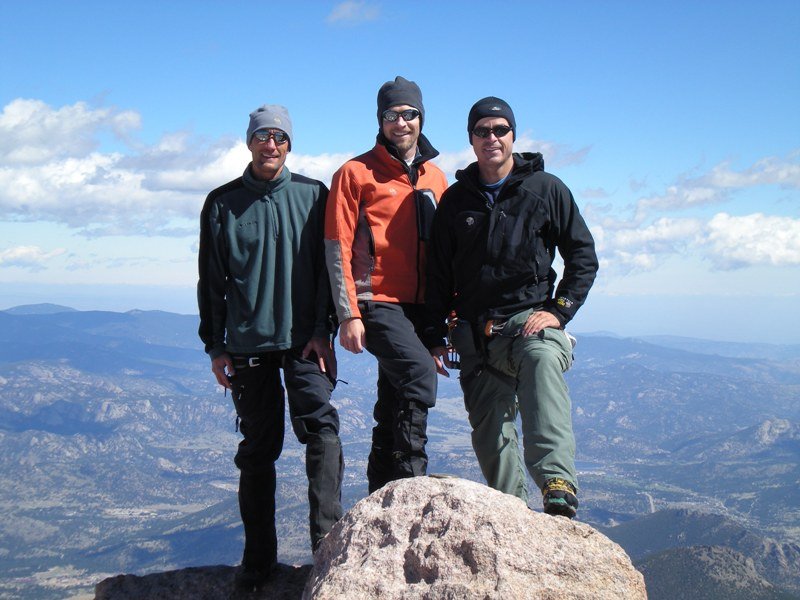 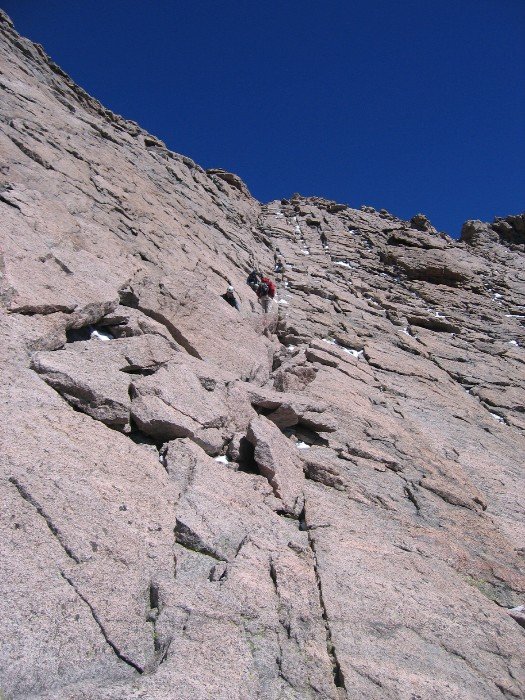 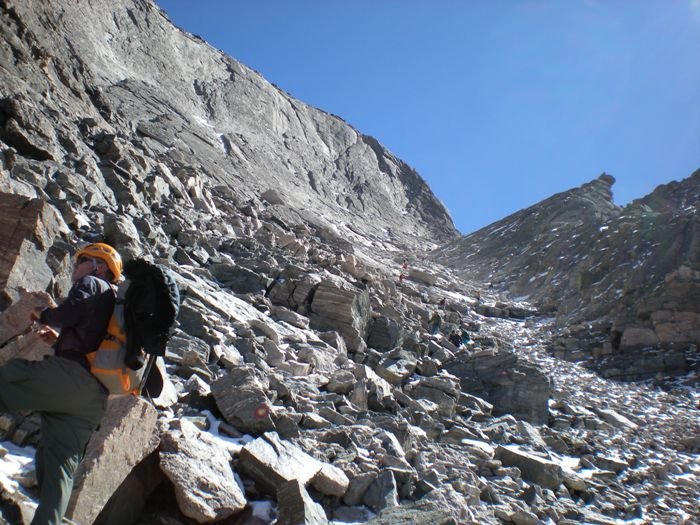 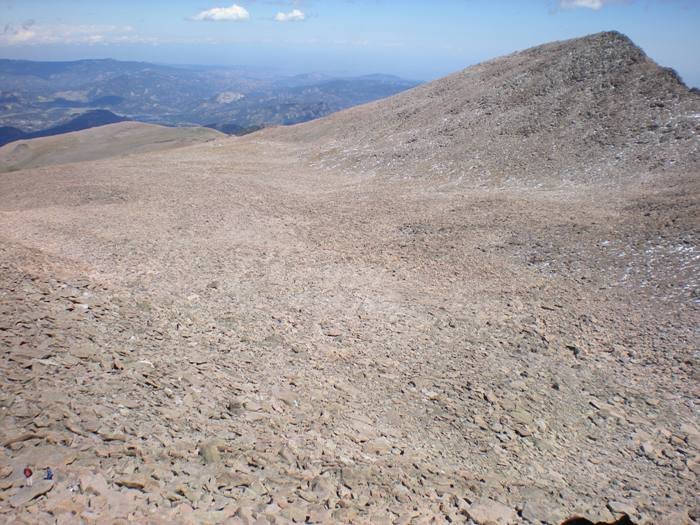 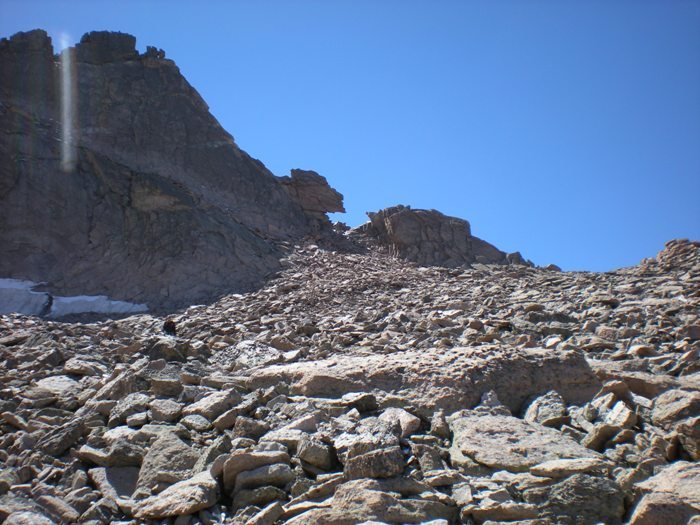 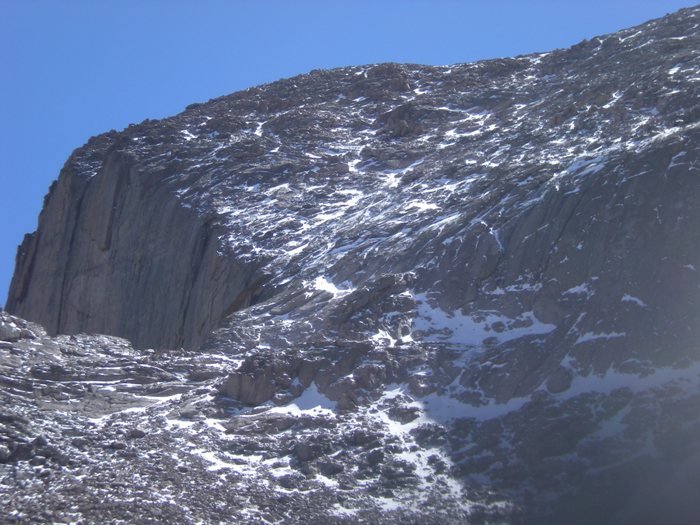 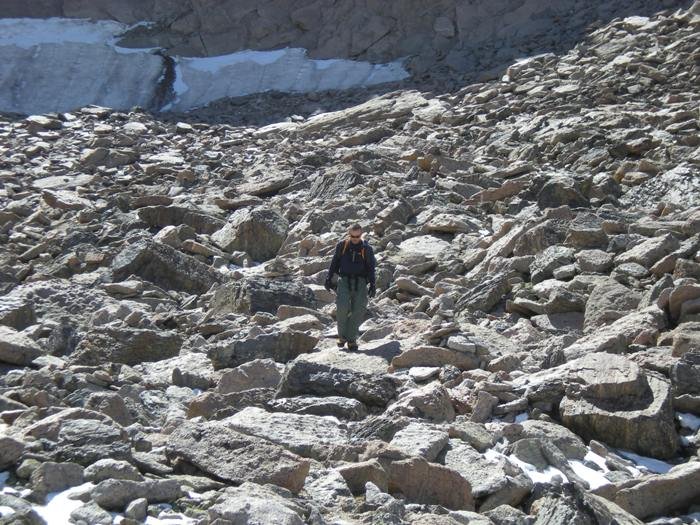