I wanted to climb the Dreamweaver Couloir on Mount Meeker, so after reading a couple of recent trip reports that indicated the route was in, I asked Brian and Kevin to join me.  Doug was a last minute addition to the team.  Dreamweaver Couloir is generally rated AI3/M2+ and is a classic climb next to the Flying Buttress on Mount Meeker's north face.  The approach is from the Longs Peak Trailhead toward Chasm Lake.

I was up at 11:00 (pm) after a couple of hours of fitful sleep to pick up Brian, Kevin, and Doug in Denver, Colorado.  No one else got any sleep on Friday night.  We were hiking by 2:30 and made good time on the approach to the base of the climb in approximately three hours.  The trail was snow free except for a small section on the south side of Mills Moraine.  Previous climbers had kicked steps in the snow sections of the route making it a fairly easy climb.

After ascending the apron, I climbed through the first narrow section of the route which was mostly snow covered.  After exiting the chimney, I heard a faint yell above me that was followed by the sound of rock fall.  As I looked up, a basketball sized rock came crashing down the couloir heading straight for me.  The rock careened off the mountain about 20 feet in front of me and cleared my left side by three feet.  I was relieved, but Brian was climbing the chimney that the rock funneled into while Doug and Kevin waited below.  The rock missed Brian by two feet and also cleared the climbers below.  After the initial adrenaline rush wore off, my legs felt as though they had been knocked out from underneath me.  It was definitely one of the scariest moments I've had in the mountains.  We all confirmed that everyone was ok and continued on.  I guess no matter how safely you climb there will always be objective hazards that are unavoidable.

The section above the first chimney was snow filled so no rock climbing was necessary.  The ribbon of snow did narrow again into a second chimney before turning into scree for approximately 200' before the Flying Buttress saddle.  This melted out section was where a solo climber above us launched the rock down the couloir.  We regrouped at the saddle of the Flying Buttress where you have the option of going left up a M3+ chimney or scrambling right.  Above the saddle, it was snow filled again with several hundred feet of snow climbing before the couloir narrowed significantly to the first crux.  Doug went up first as the rest of us waited below.  One by one we made our way up the chimney and continued on with more snow climbing.

After only a short distance, we approached the second crux which was now alpine ice.  Kevin and Brian were going to set some anchors and protection for practice for their upcoming Mount Rainier climb.  I decided to get out of their way and climbed the ice after telling them I'd wait on the summit.  Although short with fairly thin alpine ice, the second crux was fun to climb with the tools actually sticking on most swings.  Above the ice was a small section of more snow and then a scramble to the summit.

The wind picked up, so after eating, drinking, and organizing my gear, I laid down out of the wind to wait.  After a while, I got up to see if there were any signs of Doug, Brian, or Kevin when I noticed they were near the east summit of Meeker.  After a quick wave, they changed course and made it over to the true summit.  Everyone ate and drank, but we started down after a short period of time.  It didn't take long to descend to the Loft, and there are cairns marking the way to the ledges below.  We caught a couple of glissades back towards the ranger cabin below Chasm Lake.  We all stripped off layers, changed back into our approach shoes, and loaded up for the hike back out.

This was a really cool alpine climb.  The approach was easy on a trail, the climb was steep, the cruxes kept you on your toes, and the views of the Diamond, Ships Prow, and Flying Buttress were amazing.  All of us climbed with two tools and we didn't use protection on the route.  (Brian and Kevin ultimately decided not to practice setting anchors and screws because there were climbers below them.)  It was a 9.5 hour day.  We ended the climb with some mexican food and beers in Estes Park before driving home. 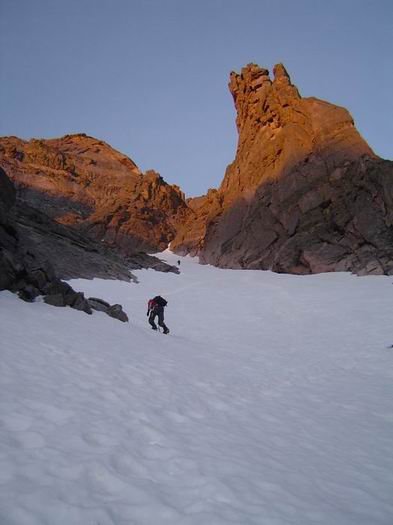 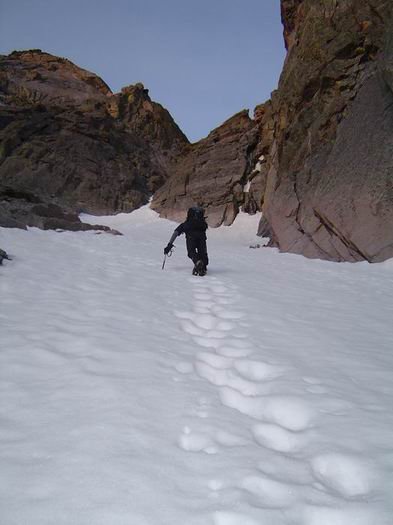 Starting from the base of the couloir. 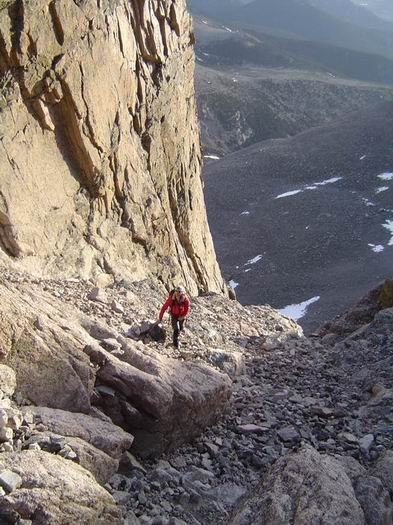 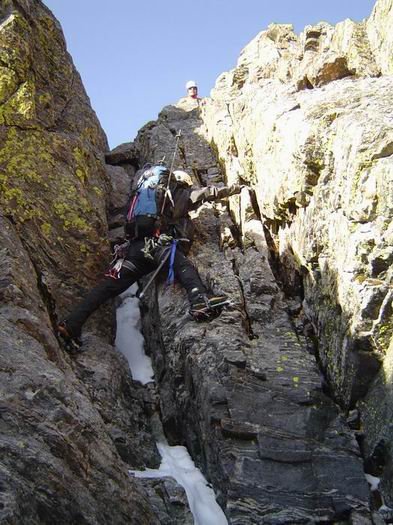 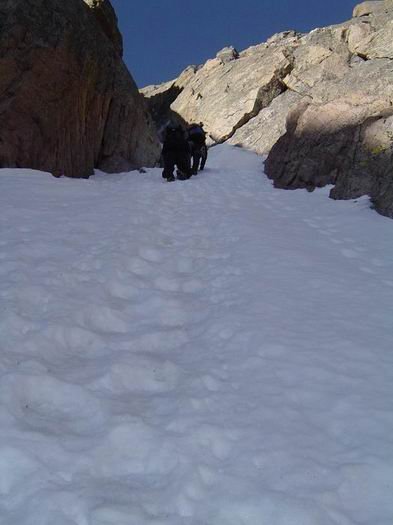 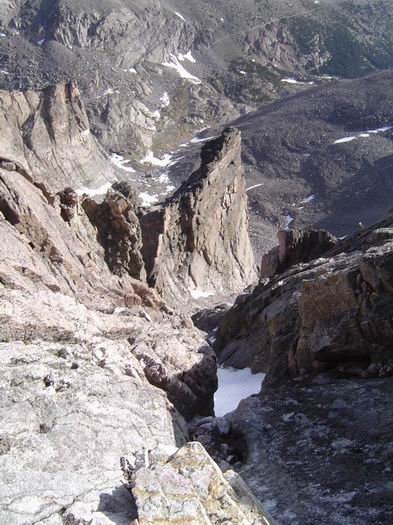 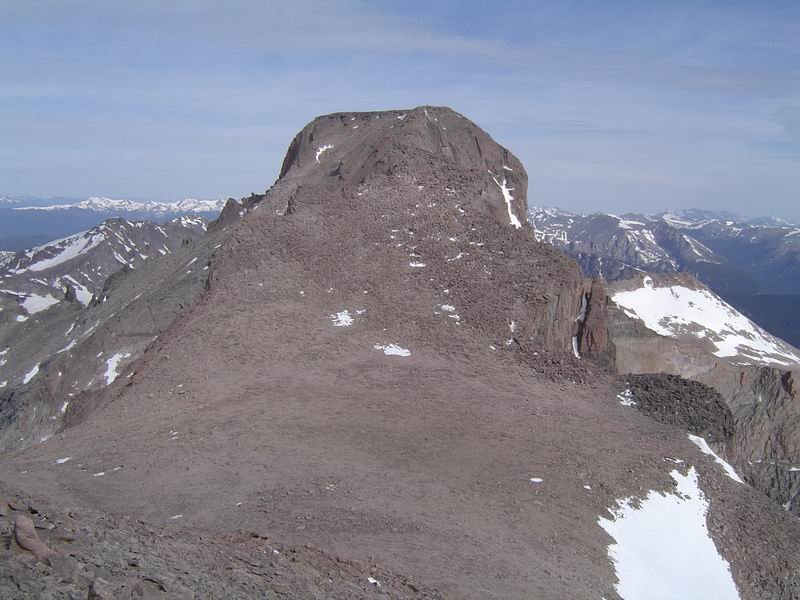 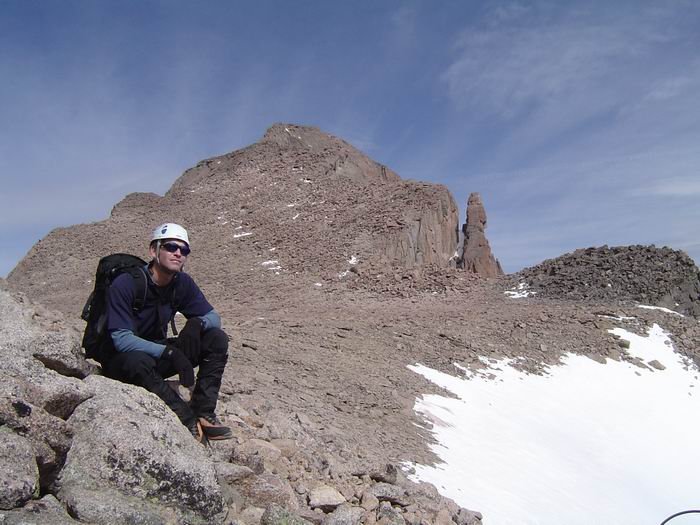 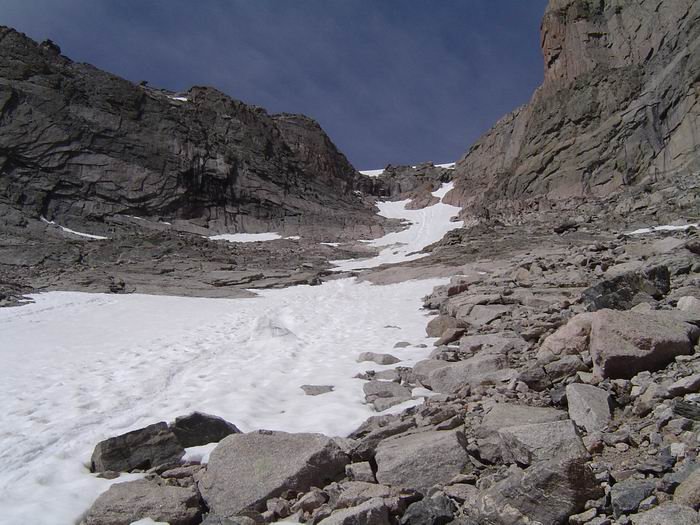 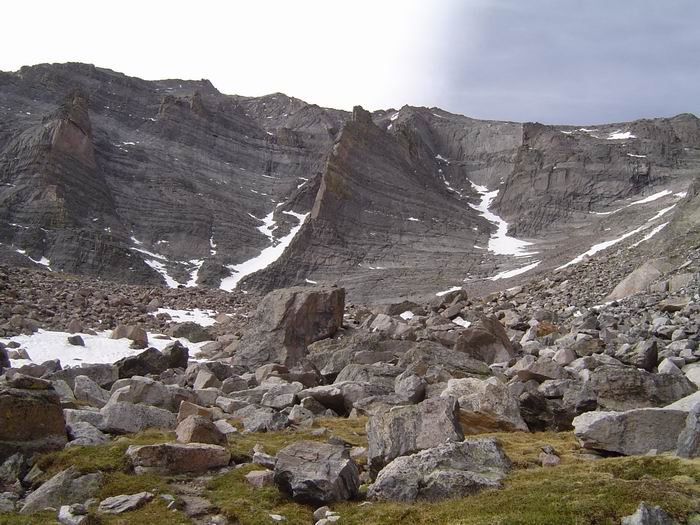 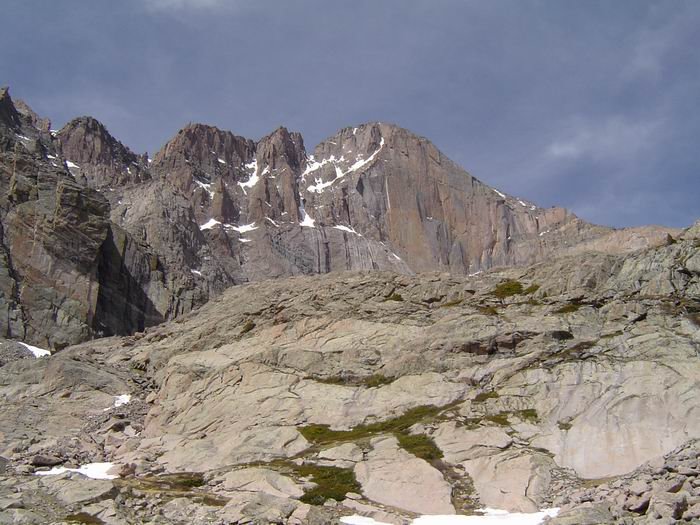 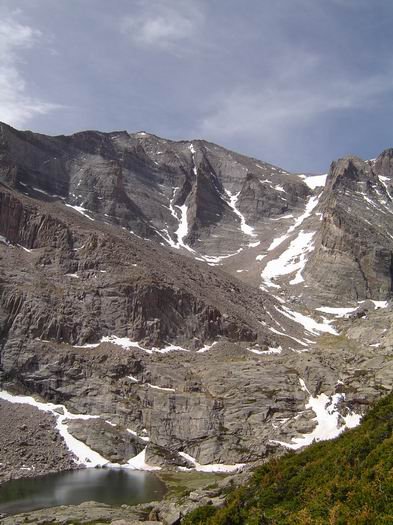