Aaron and I completed an unconventional or nonstandard route on Mount Antero in less than ideal weather conditions.  Although it is April, is sure felt like winter to us.  We started from approximately a quarter mile up from the lower Baldwin Gulch Trailhead and ascended the west gully of Mount Antero, which is just north of the numerous traditional switchbacks.  This gully deposited us on Mount Antero's south ridge at 13,750' leaving approximately 500' to climb on the normal route to the summit.

Aaron and I left Highlands Ranch, CO, around 8:30 Thursday night to stay with Mark Richardson at his condo in Silverthorne, Colorado.  We arrived around 10:00 and finalized plans for the next day.  We had originally wanted to attempt one of the north face couloirs on Missouri Mountain.  However, we soon came to the realization that most north facing couloirs are not set up this early in the year.  In addition, the forecast took a slight turn for the worse, so we decided on Mount Antero as a backup plan.  We set the alarm for 4:00 and wanted to be hiking shortly after 6:00.

Mark wasn't feeling well the next morning, so he bailed and Aaron and I were off.  At least we got to crash at his condo and save some driving time.  Our hope was that the Baldwin Gulch road would be open to the four-wheel-drive parking area and we would have a nice leisurely hike.  We had no such luck as the road still has large snow banks in shaded areas relatively low on the road.  In addition, a downed tree blocked access about a half mile up the road so we started hiking at 6:30 after only driving a short distance up the road.

We hiked to the four-wheel-drive parking lot in just over an hour where we crossed the creek and began following a broken trail southeast up Baldwin Gulch.  Temperatures were cool and the snow was firm, so post-holing was not an issue.  We actually left our snowshoes at the trailhead.  After hiking for just under a mile, we left the snow covered road as it turned slightly southwest and hiked towards the mouth of the main gully south of Point 12772.  This gully provided an easy snow hike to approximately 13,200'.  This was a direct approach to Mount Antero's south ridge.  Unfortunately, the final 500' to the ridge were fairly unpleasant as you are in a moderately steep gully with loose rock.

We finally gained the ridge where Aaron cached his pack and we picked up the standard trail to the summit 500' away.  Although it had been snowing on us all day, we were protected in the gully from the wind and cold.  Once on the ridge, the protection was eliminated and the elements were much more noticeable.  As we started up the ridge, the snow accumulating on the rocks was now becoming a nuisance.  In addition, Aaron was becoming fatigued as this was his first hike at elevation in quite some time.  The weather was increasingly more of a factor as visibility remained low and snowfall was heavier.

We finally topped out with absolutely nothing to look at but each other.  Aaron had to dig deep to make the final push and was extremely exhausted.  However, because of the weather we had to descend immediately with little rest.  We returned to Aaron's pack and dropped off the ridge back into our rubble filled gully.  Being back out of the wind and cold was helpful.  The descent back to the snow field wasn't as bad as expected, but the snow covered rocks kept it interesting.  We had hoped to glissade all the way back to the entrance of the gully, but the angle just wasn't steep enough.  This gully would provide an easy ski descent of around 1,200' or more.

We primarily plunge-stepped down the gully as the snow continued to fall.  We followed our tracks back down to the road and out to the four-wheel-drive parking area.  Hiking out on a nice wide road was a relief and we made it back to the vehicle after a 9 hours.  It certainly would have been nice if that gully had been snow filled all the way to 13,750' below Mount Antero, but when it is I'm sure the approach to the gully up the road would be more difficult due to snow lower down the mountain.  We didn't use our crampons, but Aaron did use his axe on the ascent mainly because he didn't have trekking poles.  Neither are required for this route.  Post-holing wasn't an issue, but we had a cool day where the snow didn't soften significantly. 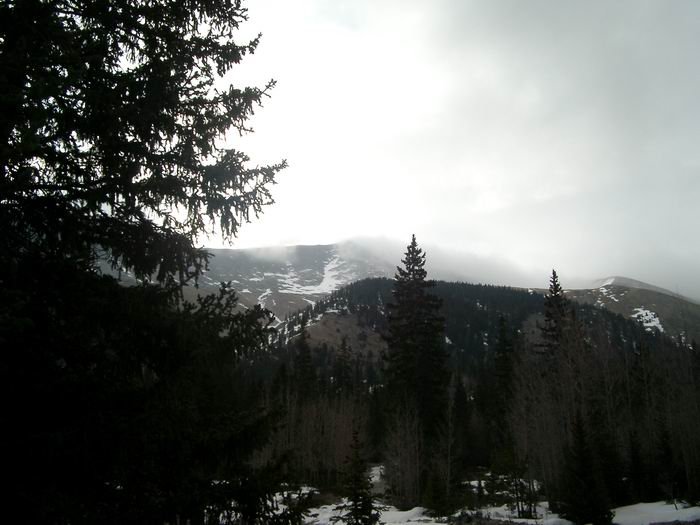 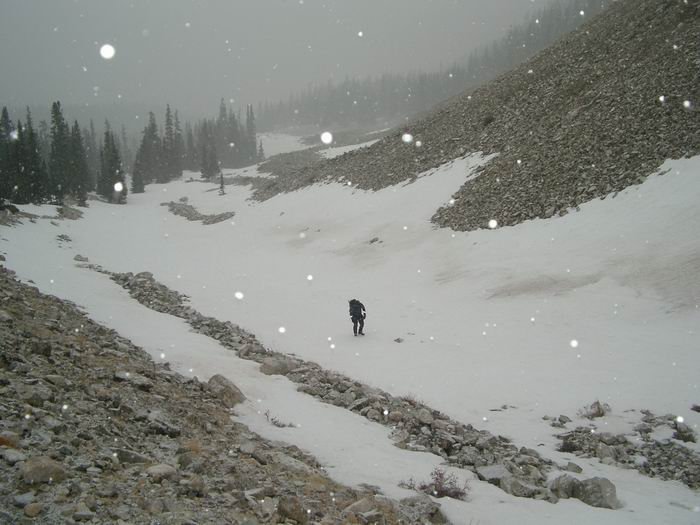 Arron starting up the gully. 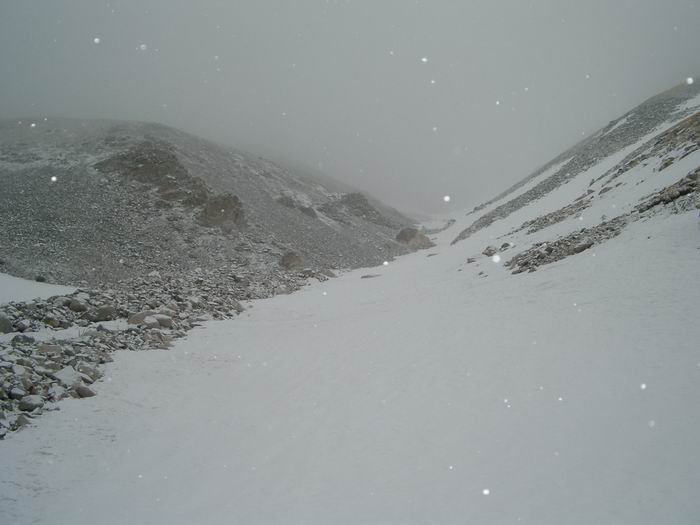 Looking up the gully about half way up. 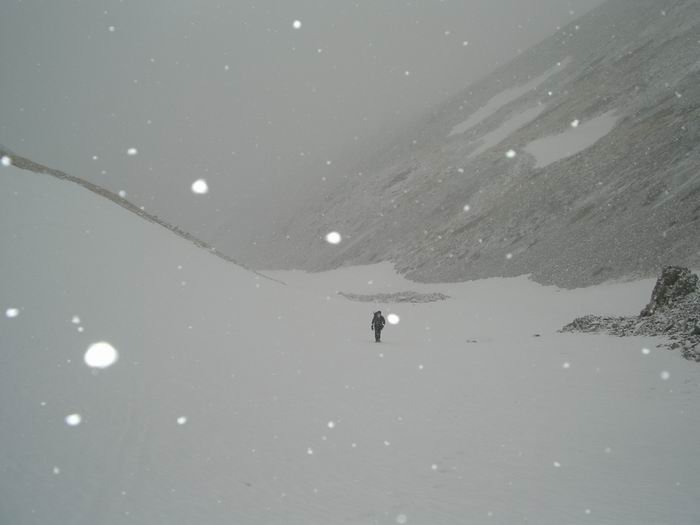 Looking down the gully about half way up. 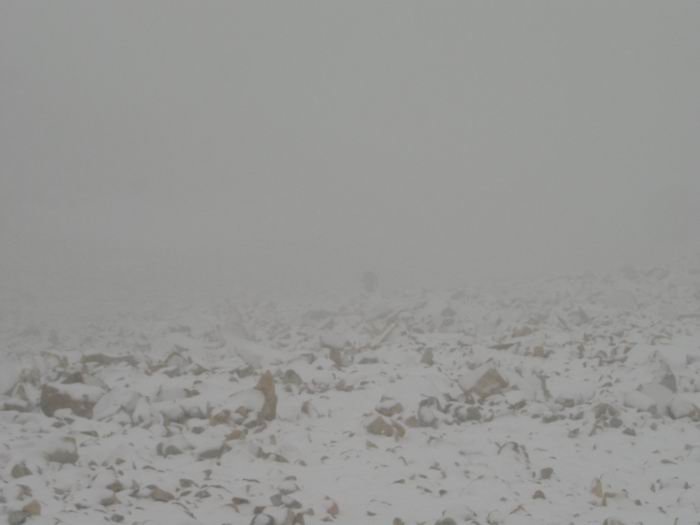 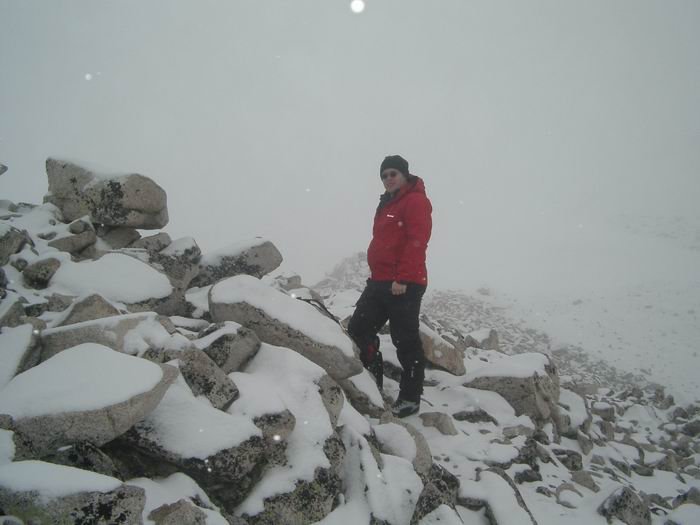 Aaron on the ridge after the gully climb. 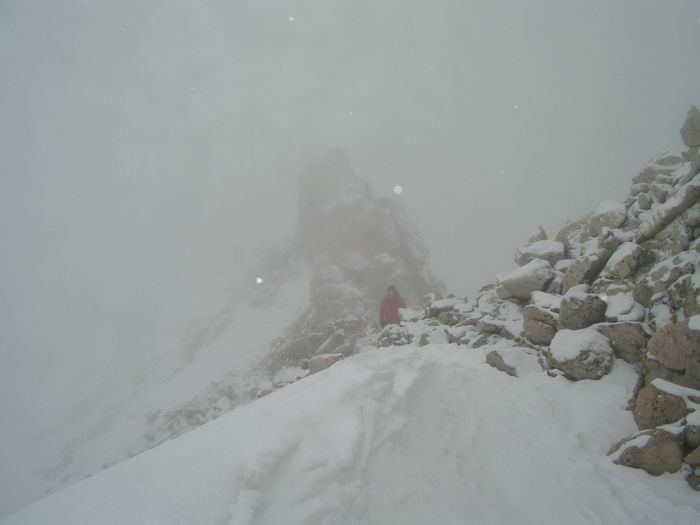 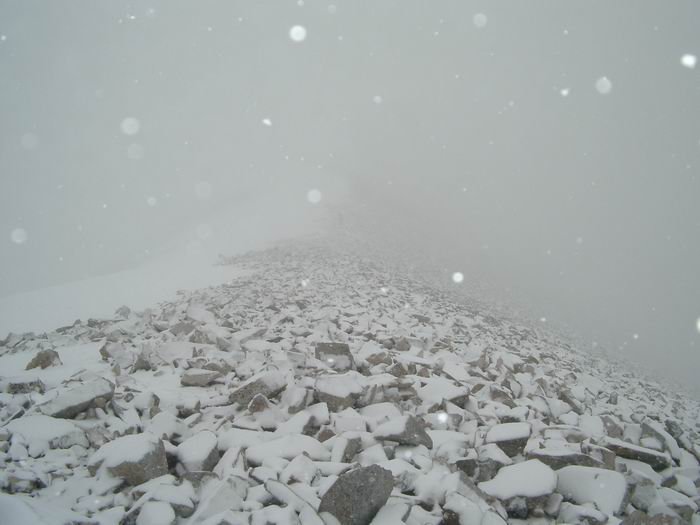 Looking down the ridge in poor weather conditions. 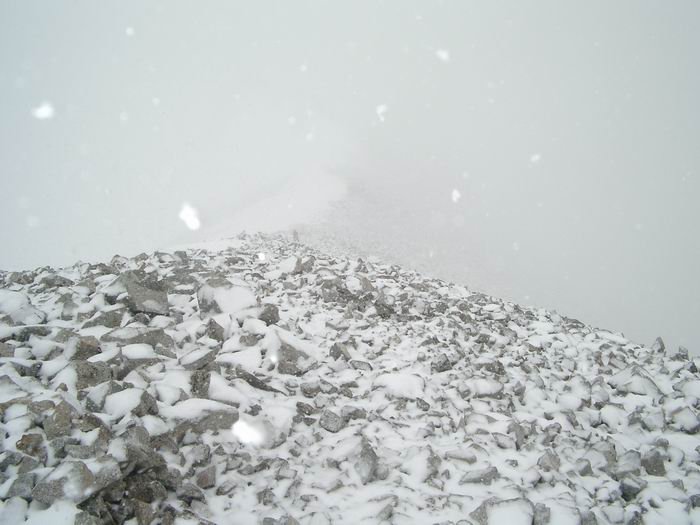 Nearing the summit of Mount Antero. 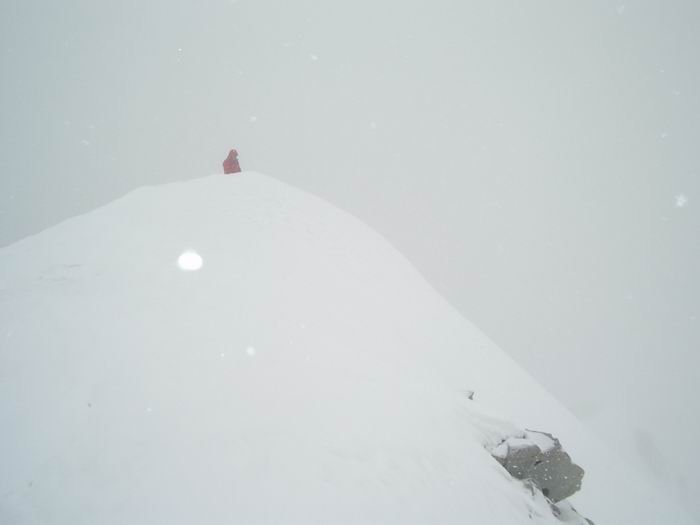 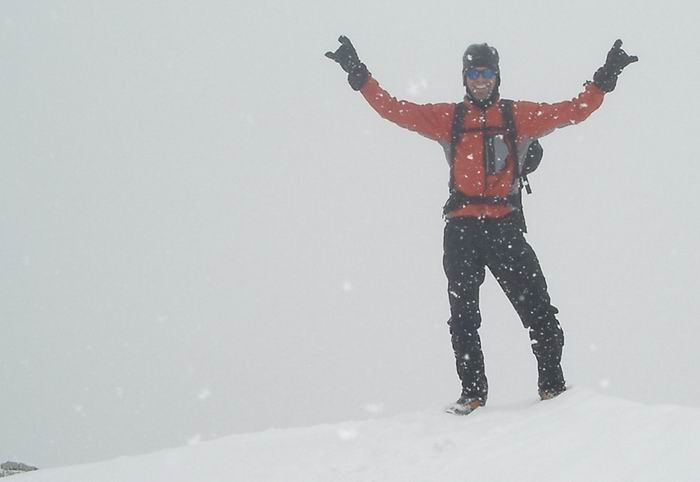 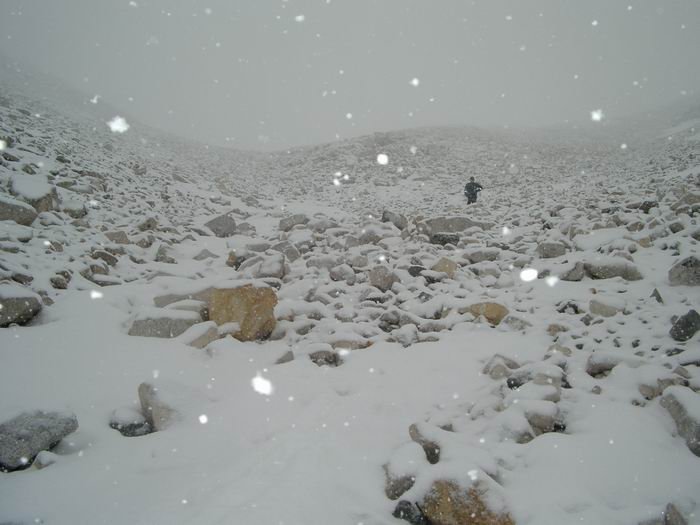 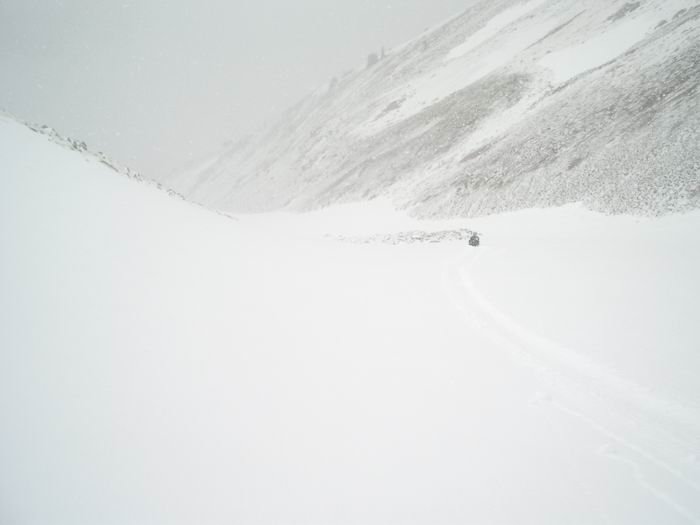 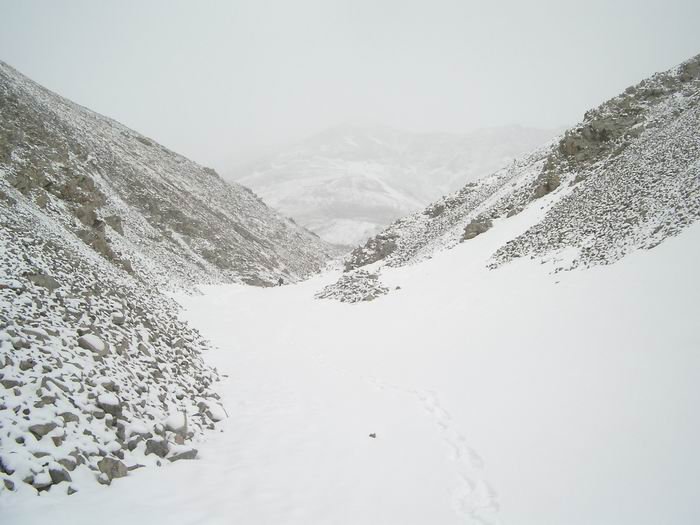 Looking back up the gully on the descent. 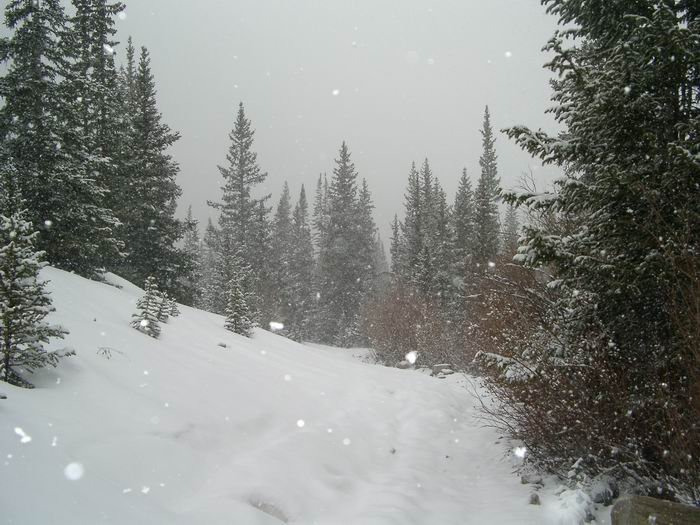 Hiking out on the road.