I made plans earlier in the summer to climb Crestone Needle with Kevin since it was my remaining Sangre de Cristo 14er.  As the middle of September came around, Layne, Karen, and Jim joined our party.  Layne rode with me to the South Colony Lake two-wheel-drive trailhead and then caught a ride up the road with a coworker of mine, Tom Milinowicz, who was going to climb Crestone Needle on the standard route.  I caught a short nap in my Trooper before Kevin, Jim, and Karen arrived around 8:00.

The first time I went up the South Colony Lake road it was dark and raining.  This time it was only dark, and we made it up in 1 hour and 15 minutes.  Tom and Layne had secured a couple of camp spots for Kevin, Jim, and Karen while I simply slept in the back of my vehicle.  Our initial plan was the Peak to Needle Traverse.  Layne suggested earlier in the week that we also add Broken Hand Peak and Crestolita Peak to our loop.  Kevin and I thought is sounded like a good idea at the time.  We went to sleep under an extremely bright full moon.  The wind blew noticeably throughout the night.

We were on the trail to South Colony Lakes at 4:00 and quickly found ourselves climbing to Broken Hand Pass.  As we approached the pass, the wind picked up considerably and we hunkered down to add a layer.  My primary goal for this trip was the Peak to Needle Traverse.  I made this point fairly clear to everyone over the roar of the wind and decided that if it did not let up once we descended off the saddle, I was going to pass on Broken Hand Peak and Crestolita Peak.  Fortunately, the wind died down to a tolerable level after we got off the pass.

We made the summit of Broken Hand Peak with extraordinary views of the surrounding area.  We headed west to the Broken Hand Peak/Crestolita Peak saddle where we took a short break.  My blood sugar was low, so I had something to eat.  We traversed across Crestolita Peak’s east slopes to the prominent North Couloir without dropping any additional elevation past the saddle.  It was bit tricky entering the couloir, but we eventually all got inside and started to scramble.  The walls of the couloir were confining, and the rock was moderately loose.  I stopped twice to put on my sunglasses and remove a layer before reaching the summit.  With a smile on his face, Layne said two down, two to go.

We made short work of the descent to Cottonwood Lake and the base of the South/Red Couloir of Crestone Peak.  On the way, we filtered water and took another short break at the lake.  Immediately upon starting up the South/Red Couloir, I was feeling poorly.  I assumed the day was simply starting to take its toll on me.  Layne raced up the couloir as I struggled to keep him in sight.  Kevin was kind enough to keep me company on our climb to the summit.

Once on top, we reunited with Jim and Karen who did not attempt the two other 13ers.  We celebrated with a few photos on top of Crestone Peak.  I had climbed the Northwest Couloir of Crestone Peak this past spring, so it was great to return to the same peak via a different route.  I took a slightly longer break and finally ate something of substance.  I knew that if my condition didn’t improve, I wouldn't be able to complete the traverse.  As Jim and Karen went up the Crestone Peak’s east summit, Layne, Kevin, and I started our descent back down the South/Red Couloir to find our exit point to begin the traverse.

We quickly found a cairn marking the start of the Crestone Traverse.  As we regrouped at the cairn, I indicated to Layne and Kevin that if I felt as weak as I did climbing Crestone Peak on the start of the traverse, that I would have to opt out and simply return over Broken Hand Pass.  Fortunately, I started to feel better and didn’t bail.  I actually felt stronger on the traverse and down-climbing the south route on the Needle than I did earlier in the day.  The food I ate on top of Crestone Peak boosted my blood sugars and got me back to reasonable form.

As far as the traverse goes, I was surprised at how far you have to drop.  It really seemed like we just kept going down and down.  Generally speaking, the route-finding was moderately difficult.  If we seemed to dead end, one of us would spot a cairn to point us in the right direction to assure us that we were on the right route.  Teamwork helped greatly too.  On several occasions, we took turns scouting the route while the other two waited for confirmation of where we should go.

There was only one occasion where we got held up for more that a minute or two.  We climbed up a gully that we thought was supposed to take us near the ridge crest.  As the gully narrowed, we ran into a large overhanging chock stone.  I climbed a 20 to 25 foot pitch up a narrow chimney to the left of the chock stone which I thought was easily 5.3 or 5.4 based on my limited experience.  Once on top, I indicated that I thought that climbing was a lot harder than anything I anticipated on the traverse and it looked like more of the same above me.  Layne made a scouting run as I waited on top.  Upon his return, we learned that we needed to go through a small notch and continue traversing rather than climbing up the gully.  I carefully down-climbed and we pressed on.

We found the correct gully to ascend towards the ridge crest after traversing on some steep slabs.  We circled around the bottom of the south gendarme and another small point until we were standing at the bottom of the crux.  The wind was slightly stronger as we started up the ridge.  Everyone did great; however, we were fairly certain that down-climbing the pitch would be more challenging.  We signed in the summit register, and started down Crestone Needle’s south route.  The wind on the descent was brutal.  I had to brace myself several times during gusts.  Of course the fatigue likely magnified the effects of the wind, but everyone agreed that it was still strong.

We regrouped on the top of Broken Hand Pass and began the long hike back to camp.  It went quicker than I expected as we worked our way back down to the lake and four-wheel-drive trailhead.  I think it was about a 14 hour day with the traverse taking us 3 hours and 30 minutes.  We loaded up the Trooper and Tom’s vehicle and began the drive down the road which took longer than the ride up.  I dropped Layne off at his vehicle in Colorado Springs, Colorado, grabbed a burger, and was home at about 11:45 that evening. 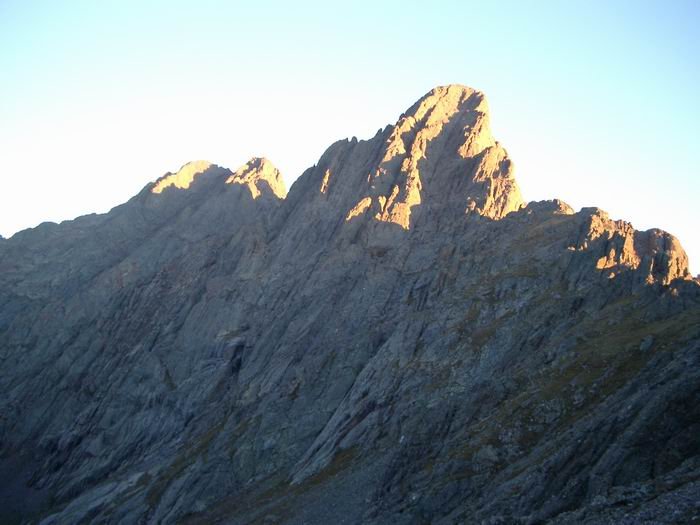 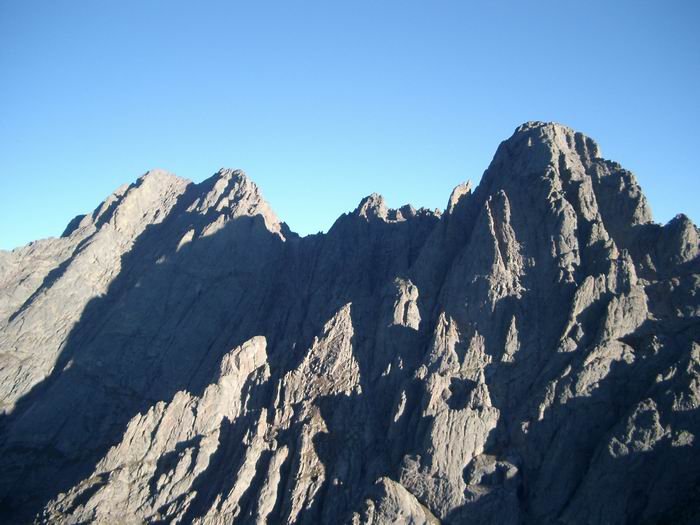 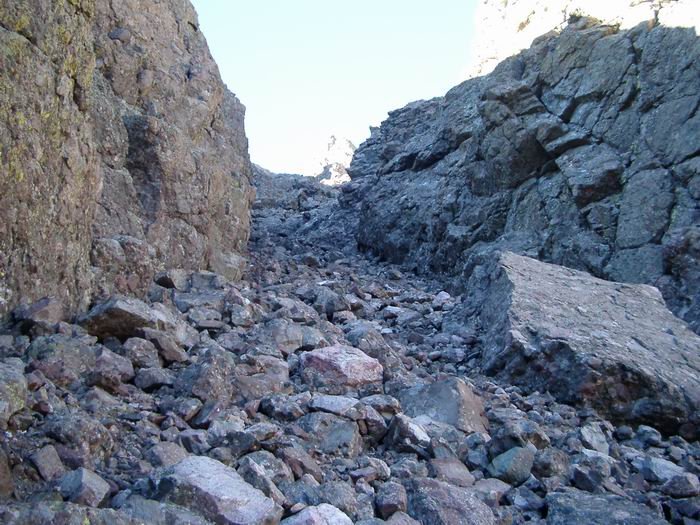 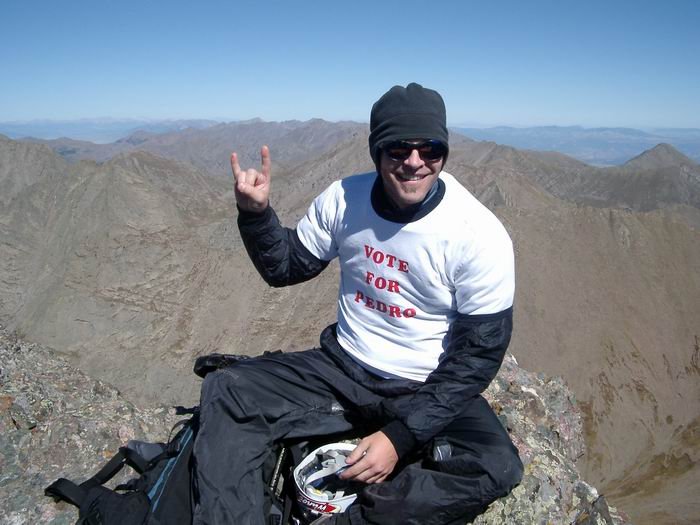 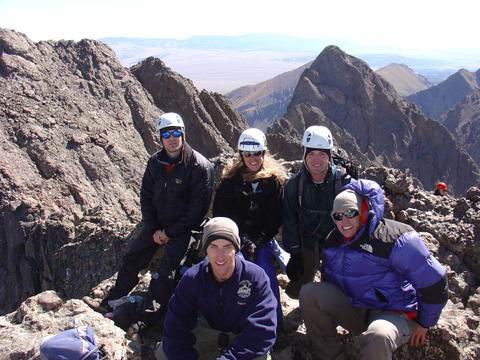 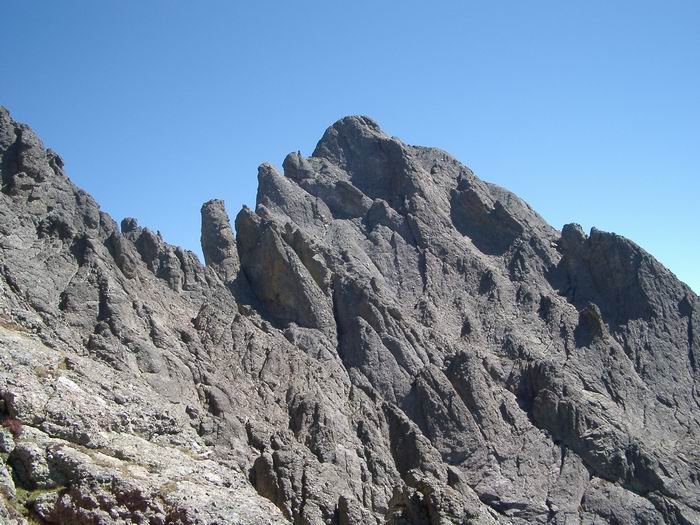 Crestone Needle from the traverse from Crestone Peak. 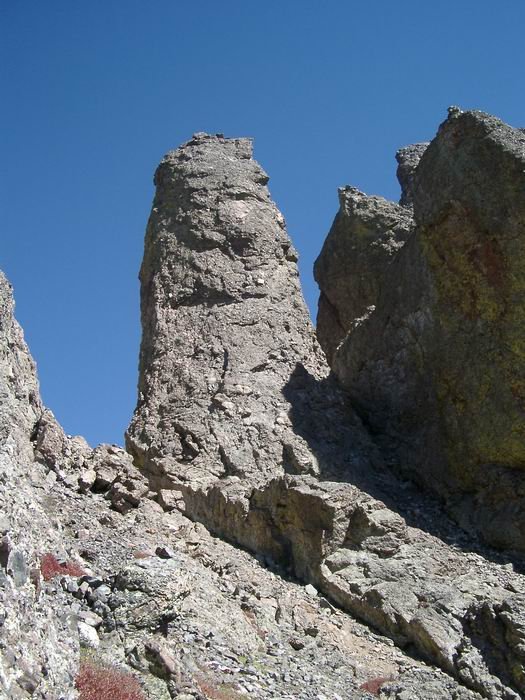 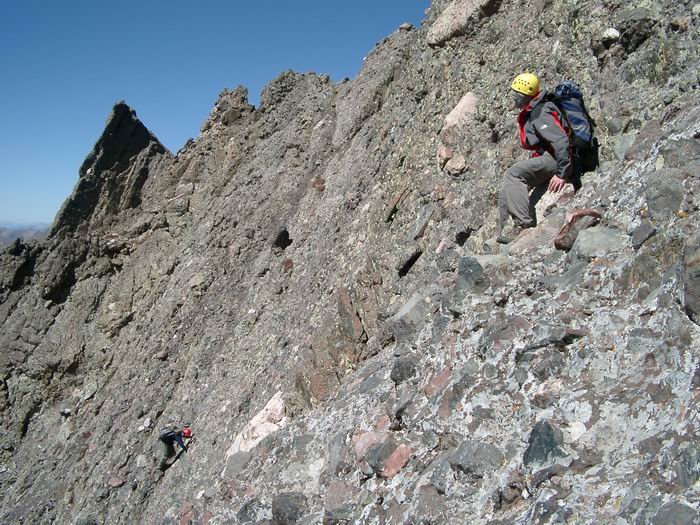 Kevin and Layne on the traverse. 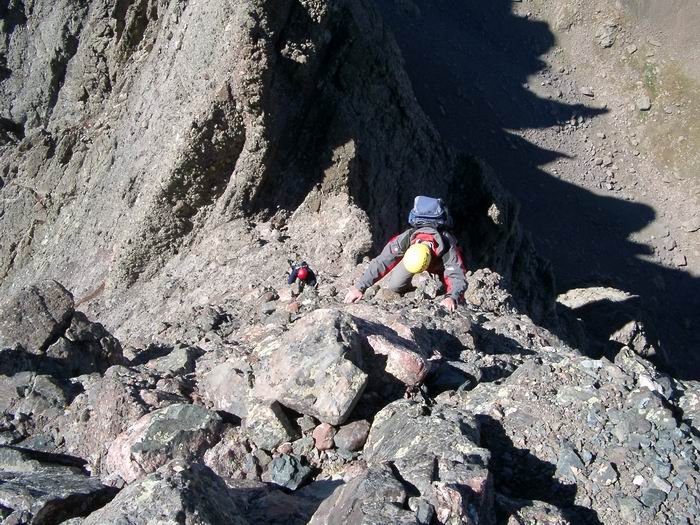 Kevin and Layne on the crux of the traverse. 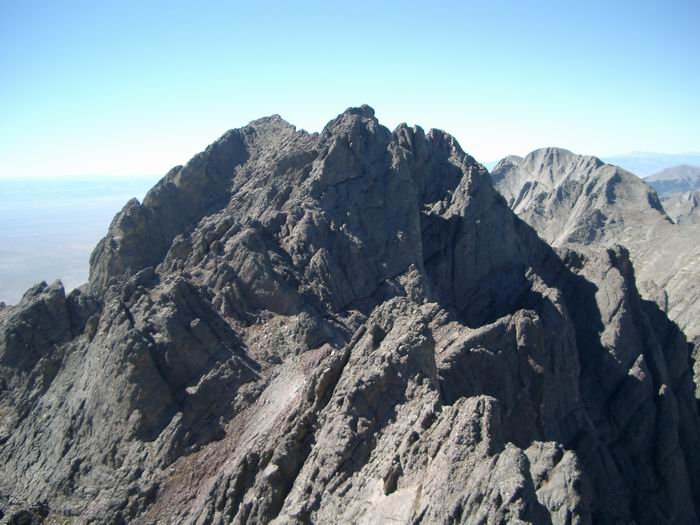 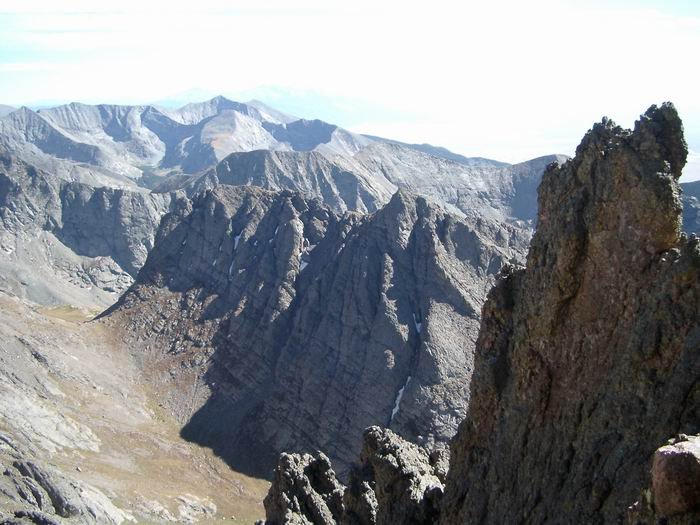 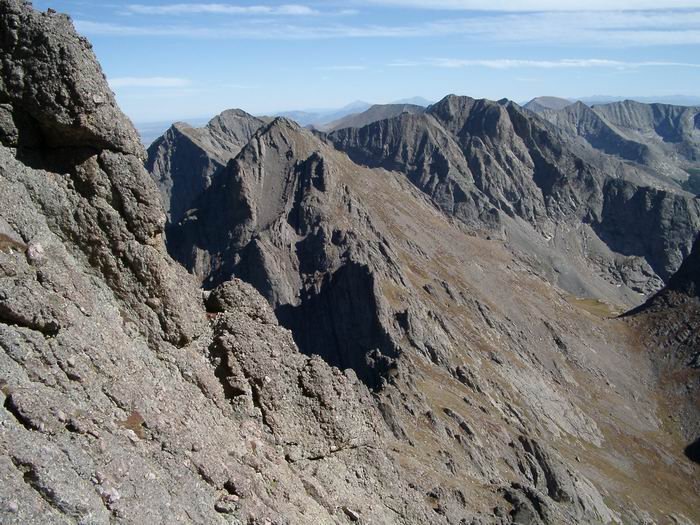