We climbed the east ridge of Sunshine Peak from the Mills Creek Campground.  It took us six hours to ascend and just over three to descend after our summit time.  We hiked for approximately 1,500’ before reaching snowline.  After this, it was 2,500’ of breaking trail and snow shoeing to the narrow ridge leading to the summit.  Snow conditions varied greatly.  For the most part, we generally sank into the snow between six to twelve inches; often times more and occasionally less.  We removed our snowshoes for the last 500’ and finished on foot with ice axes because of the steepness and exposure encountered.

Since I had a couple of weeks of work scheduled in Durango, Colorado, I thought I’d take advantage of the trip and attempt a 14er in southwestern Colorado.  I decided to try Sunshine Peak after reading a relatively recent trip report and learning about trailhead access.  I had never been to the San Juan Mountains and was unfamiliar with the area.  I did not want to hike solo, so I posted for climbing partners on a couple of message boards.  Surprisingly, this trip ended up being a reunion of climbers from my attempt of Mount Yale last April with the addition of Jamie.

The trailhead is accessible with a two-wheel-drive vehicle and the snowline was relatively high because of the southern exposure of this route.  We started hiking at 6:30 and were making slow but steady progress.  From the statistics of the hike, it is fairly obvious that the entire climb is steep.  After negotiating the cliff bands above the road, we worked our way into the trees.  When viewing a map of the area, you can see that the Mill Creek Campground has a small drainage on either side of it.  We generally climbed on the east shoulder of the west creek between the two drainages.  We utilized game trails when convenient and even picked up a climbers trail with sporadic cairns at one point.

The snow was not strong enough to hold our weight without snowshoes, so they went on almost immediately upon reaching the snow around 11,000’.  We continued to work our way north-northwest in the trees.  Because of the difficulty of trail breaking, we changed leaders frequently in order not to burn anyone out.  When following, it was almost as if you were simply hiking a steep trail, but when leading, the climbing was strenuous and difficult.  On our second break after gaining 2,000’, Jamie decided it just wasn’t his day.  Fatigue and a slight case of altitude sickness had already taken its toll and he informed us that he was not able to continue.  He returned to the trailhead and hitch-hiked back to his vehicle in Lake City, Colorado.

Greg, Carl, and I soon made it to tree line.  We continued our routine of trading leaders, hiking slowly but surely, and taking our scheduled breaks.  The weather was sketchy and visibility was limited at times; however, the wind was nominal and we decided to keep going.  At approximately 12,500’, we reached a flat shelf.  We made our way across this area and began ascending the triangle shaped slope to the more narrow and prominent east ridge of Sunshine Peak.  As we reached 13,200’, the climb was beginning to wear on us and the group began to spread out slightly.  I feel as though the televator on my MSR snowshoes helped me out a lot on this steep hike.  The televator lifts your heel, reduces calf fatigue, and makes climbing easier and more efficient.

We took a final break together at 13,500’ where there were vertical cliffs to the north.  We could finally see the remainder of the route and east ridge of Sunshine Peak.  It looked corniced and steep.  Only 500’ from the summit, we removed our snowshoes and broke out the ice axes.  Despite its steepness, the snow was more wind blown which reduced post-holing some.  Greg even opted to put on his crampons when we reached a very steep and slick 40’ pitch of snow.  We stayed to the right of the ridge and cornice.  My eyes had been playing tricks on me.  Because of the white snow and sky, I had a difficult time with depth perception.  Rocks on the shelf that looked 100’ away were often several hundred yards, and now as I gained a small hump on the ridge, the summit looked 200’ vertical feet above me.

I thought we had made fairly good progress and was disappointed to see what remained of the route.  I started to plow through now soft and deep snow determined to make it to the summit.  Surprisingly, after only 20’ of difficult work, I popped out over a small cornice and realized there was nowhere else to climb.  I was actually a bit confused after my previous assessment of how far we had yet to go.  I walked across the summit to verify we had made it and then returned to look back down the east ridge and yell to Carl and Greg that I was on top.

Greg and Carl arrived shortly and we congratulated each other on our successful climb.  It was 12:30.  I estimated that to continue over to Redcloud Peak and back would take at least another 2.5 hours.  I’d like to say we decided not to attempt Redcloud Peak based solely on the questionable weather, but we realized that we were spent.  Happy with what we had accomplished, we decided not to tempt fate.  The views were limited, and after approximately 45 minutes on the summit we started our descent.

The return to the trailhead was generally uneventful.  We took a break at 12,800’ where we strapped on our snowshoes again.  Another break was needed at tree line and then at snowline to remove our snowshoes.  Unfortunately, we got off track below the snow and didn’t ever pick up the climber’s trail.  We struggled through some cliffs higher up on the mountainside and even ran into some extremely loose and rotten talus, which was unpleasant.  Finally, we were back at the trailhead at 4:30 where we said goodbye and began our respectively long drives to Colorado Springs and Durango, Colorado.  I felt like we had assembled a strong team.  We all agreed and openly admitted that none of us could have summitted solo.  Excellent teamwork, good route-finding, and a little luck with the weather made this a great winter 14er climb. 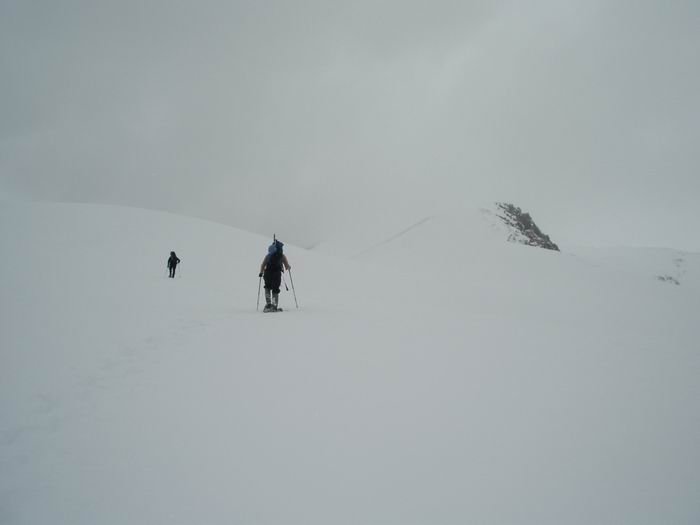 Showshoeing on the shelf. 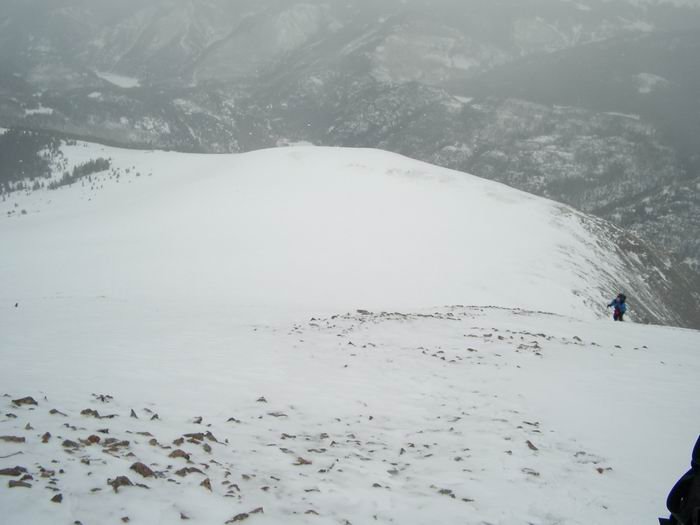 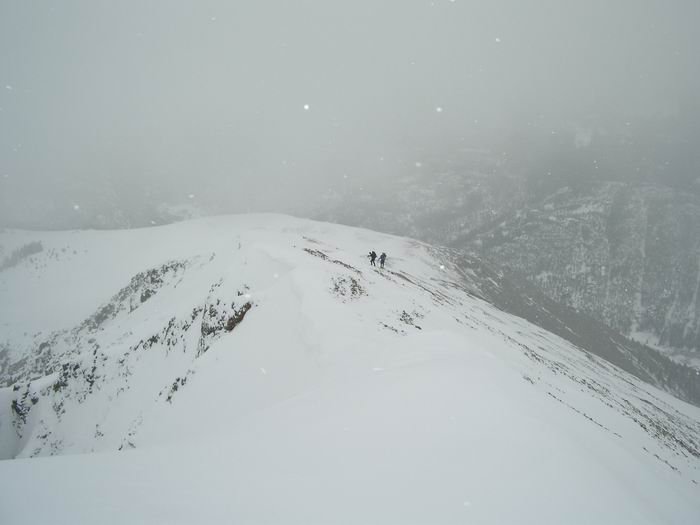 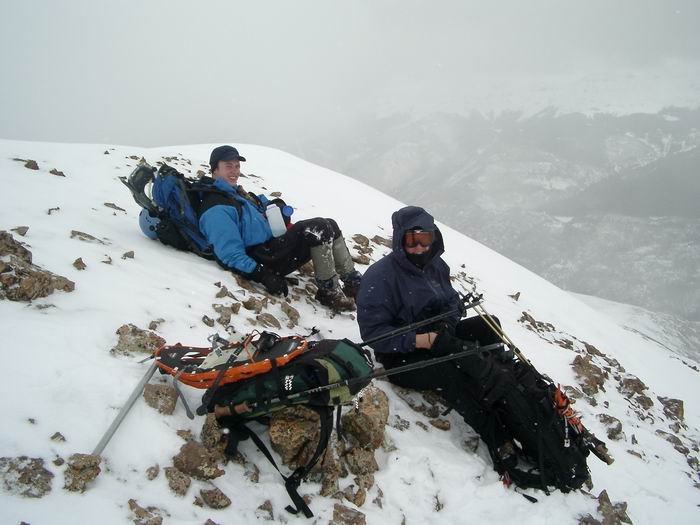 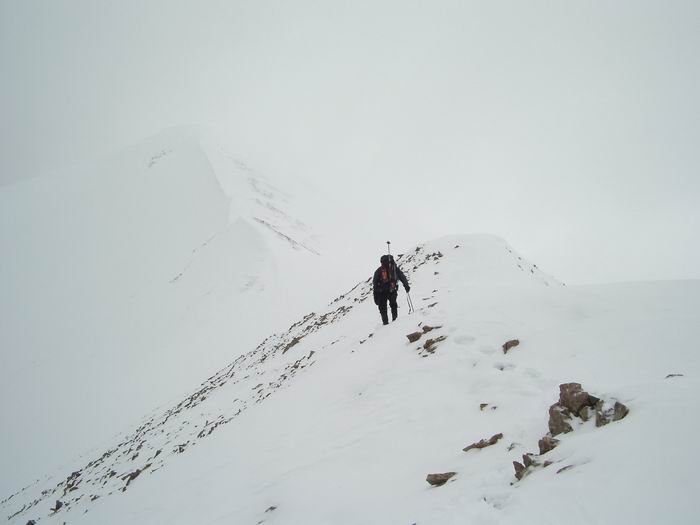 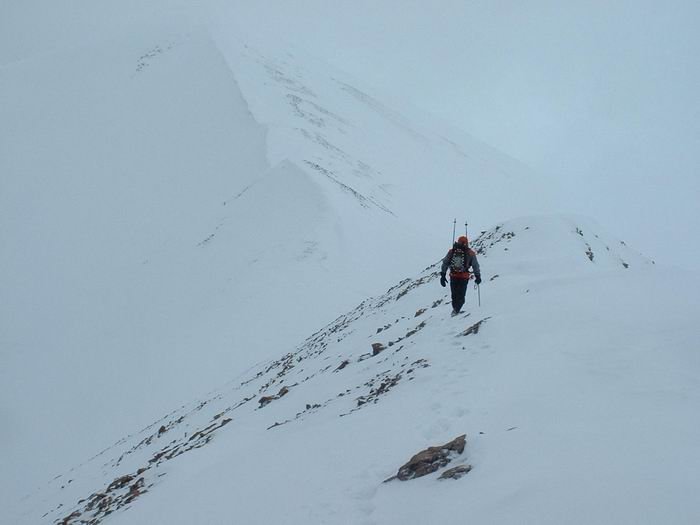 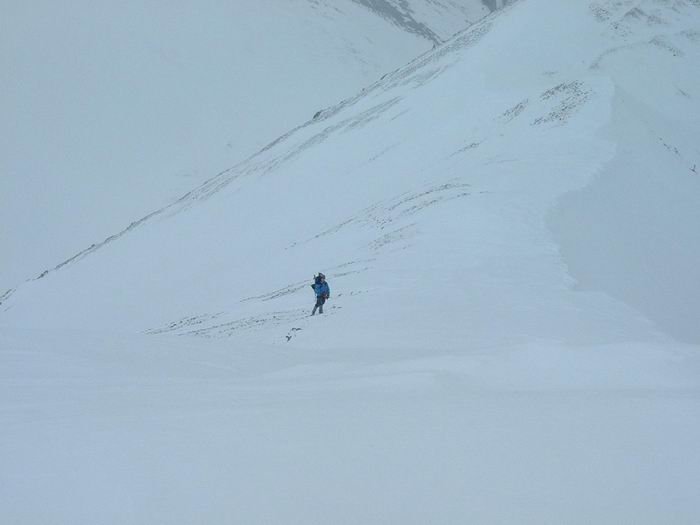 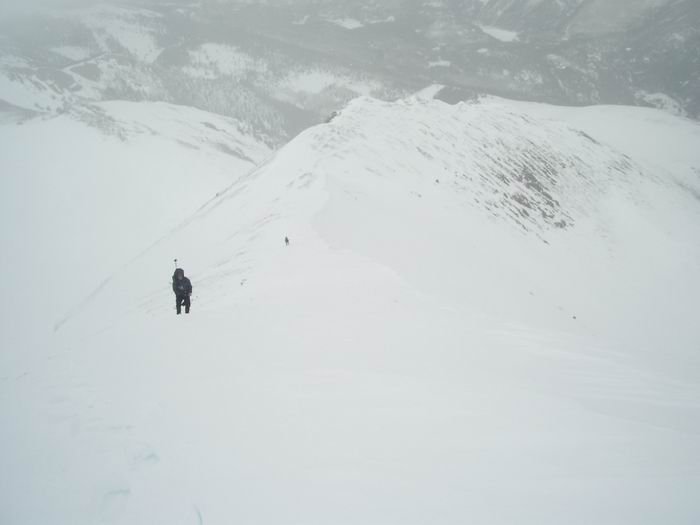 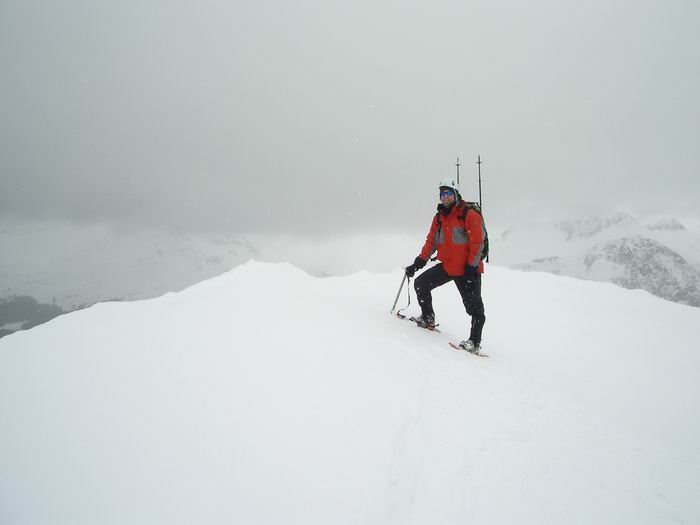 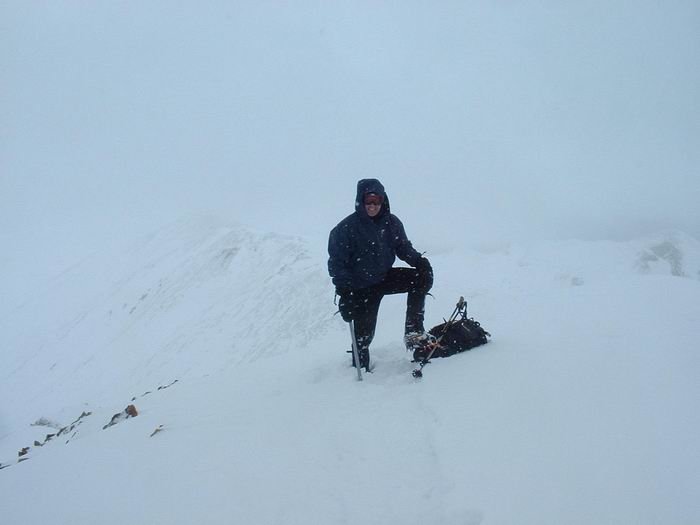 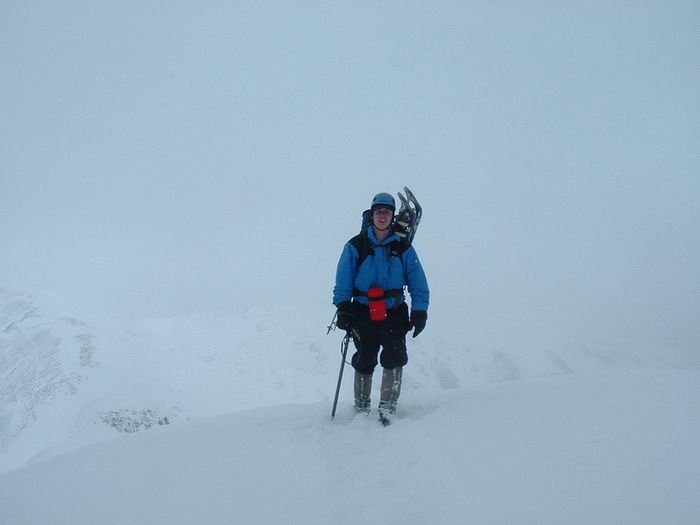 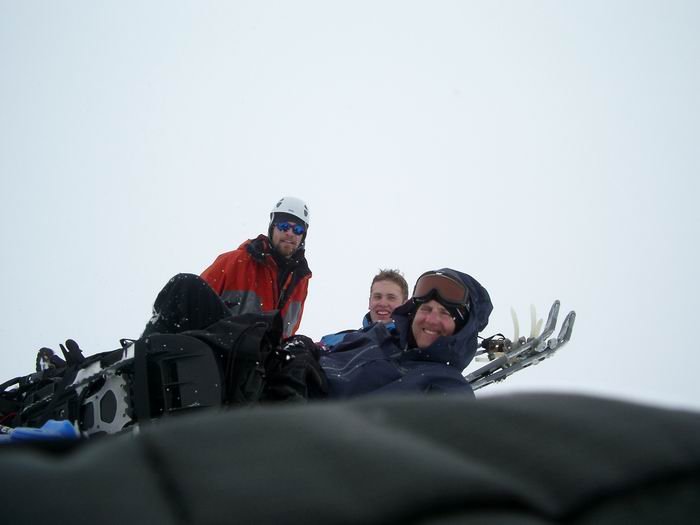 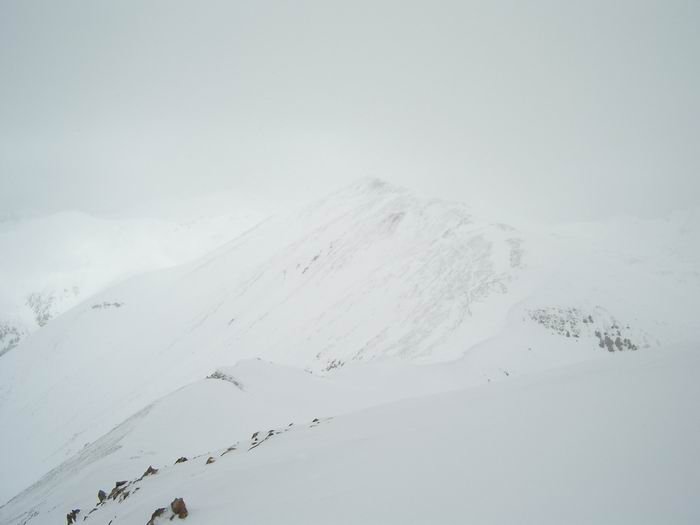 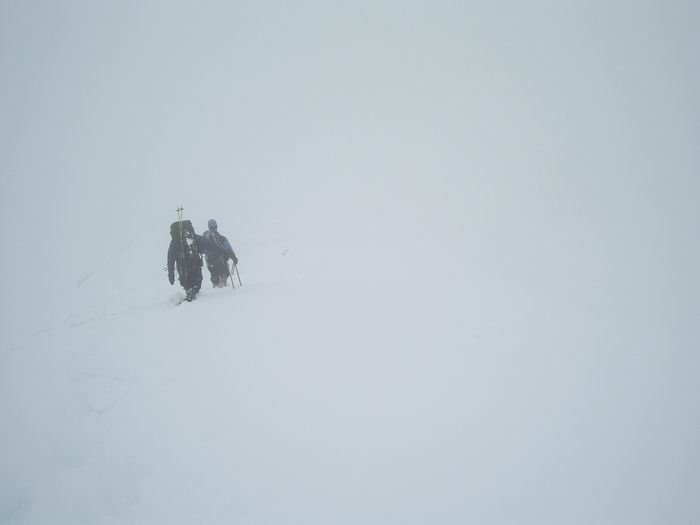 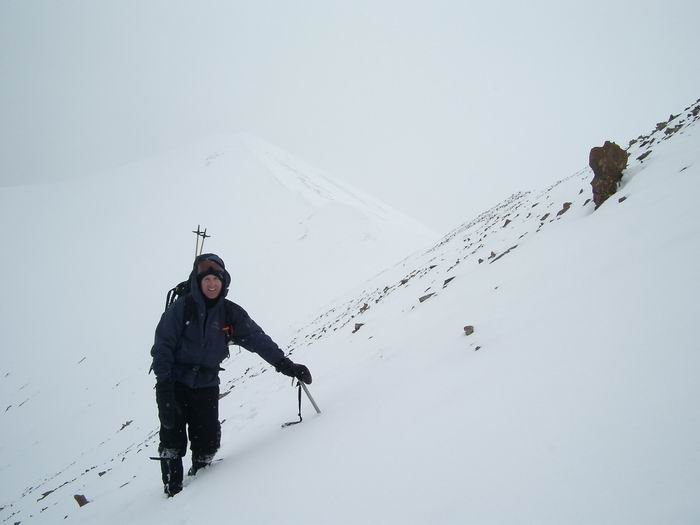 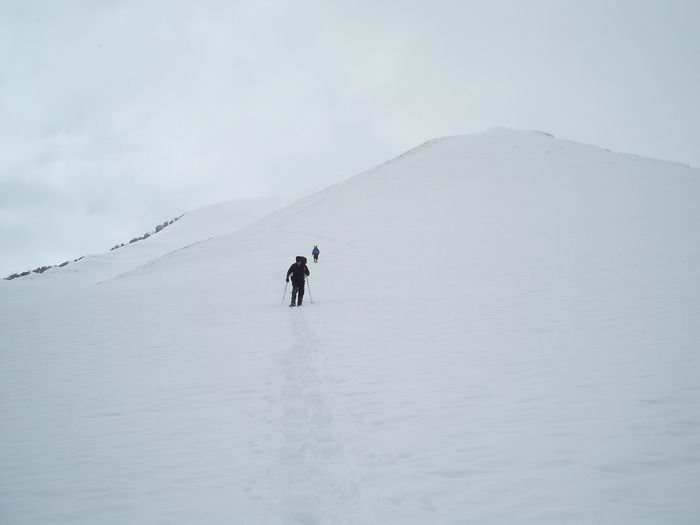