We climbed the Maroon Bells by ascending the northeast ridge of North Maroon Peak, traversing to the south, and then descending the south ridge of South Maroon Peak.  The route we chose had many pros and cons.  We had considered the Bell Chord Couloir for a final snow climb of the year, but with no recent trip reports and warm temperatures over the past couple of weeks, we decided against it.  We wanted to climb both peaks, so then the discussion turned to the traverse.  Most of our research revealed that the general consensus is that the climb is easier from south to north.  However, the long slog up the south ridge of South Maroon Peak didn't appeal to us either.  At last, we decided to ascend the northeast ridge, get at least one of the peaks, assess the weather, and if we felt good, go for the traverse.

We left the trailhead later than we wanted to at 5:00.  It didn't take long to reach the trail junction at Crater Lake and start gaining elevation up Minnehaha Gulch.  The turnoff  to cross Minnehaha Creek was relatively easy to locate and rather than having to ford the creek, we crossed it on a snow bridge.  The climber's trail is well-defined and we were pleasantly surprised at its condition as we continued south below North Maroon Peak.  There is a good trail to approximately halfway up the second gully.  Route-finding is definitely not a significant issue on the northeast ridge.

While climbing the first gully, we noticed a party descending above us.  We were impressed at either their speed or start time for their hike.  After talking with them, we learned that they actually bivied at 13,000' after running out of daylight the previous evening.  They were all in acceptable condition, but looked pretty spent.  Shortly after talking with them, we located the point where you need to traverse over to the second gully.  There was a large cairn out on a point with a dirty fleece jacket hanging from it.  We identified another cairn and possible crossing point into the second gully.  The lower route we took had a solid trail, and we felt as though we were on route.

We didn't run out of trail until about half way up the second gully where we started to look for cairns.  Keeping the climbing to class 3 was relatively easy, and we soon found ourselves on the northeast ridge.  From here to the summit, the climbing was straightforward with only one small chimney to climb that approached class 4.  It was well protected and there were only a couple of small snowfields to cross on the ascent.  There was a climber with a guide on the summit when we arrived 4 hours and 45 minutes after we started our hike.

The climber was attempting to convince his guide to take him across to South Maroon Peak, but was unsuccessful.  Our discussion quickly turned to the weather and how everyone was feeling.  The weather was holding, so Mark, Sarah, and I decided to attempt one of the four great fourteener traverses.  We dropped off of North Maroon Peak and began our adventure.  The climbing was straight forward as we followed climber's trails, cairns, and primarily just the ridge down to the first crux of the traverse.  We discussed and considered our options as six climbers were descending South Maroon Peak heading in our direction.  The north pitch definitely gave us more headaches than the southern one.  After locating the old slings, I explored the area and found a 30' vertical chimney that I felt relatively comfortable with to the northwest of the rappel station.  I slowly down-climbed the chimney with only an 8 to 10 foot ledge on the bottom to catch a fall.  I felt somewhat protected and thought there were plenty of reasonable holds.

Once back on solid ground, we assessed a shorter pitch to the right of the one I had down-climbed.  Sarah and Mark came down this one.  Although the holds appeared more sporadic, it was shorter with more protection on the bottom in case of a fall.  I spotted them down and helped with foot placement after they lowered their packs to me.  The second crux was only a short distance down the ridge, and we were fortunate to watch some of the other six climbers ascend it.  This pitch proved to be much less problematic, and compared to the first one, we were down in no time.

Getting down to the top of the Bell Cord Couloir took a bit more time, and I'm convinced we likely could have kept the climbing easier, but we generally took the most direct route regardless of difficulty.  Rather than dropping off the ridge to the west, we down climbed a couple more short, steep arêtes and chimneys.  The climb to South Maroon Peak seemed easy after what we had already been through.  I can only recall one move that required some careful consideration.  We stood on top of South Maroon Peak after completing the traverse in 2 hours and 30 minutes.  Certainly not lightning speed, but not bad for three rookies who had never been on the route before.  We took photos, ate, drank, and contemplated our descent.  For the most part, we wanted to reverse the route and return the way we came.  We were now familiar with the terrain, and thought it would be the easiest option.  However, it would require an additional 200' of elevation gain and the clouds were starting to build up.  We decided to play it safe and finish the 360 degree loop down South Maroon Peak's south ridge.

In hindsight this was a bit of a mistake.  The route finding on the south ridge was more difficult than what we previously encountered, and the descent from 13,300' on the ridge back down to Maroon Creek was brutal.  The loose rock was challenging almost the entire way down, and fatigue was taking its toll.  We spread out so as to not kick rocks on each other, but it still wasn't completely avoidable.  All of us took a number of spills.  We worked our way over to a snowfield caught a short glissade.

I dropped down to the trail that ties into the standard trail at the Bent Tree Campsite.  The glissade sliced two huge tears in the seat of my shell pants, but it was worth it to me.  After Mark and Sarah arrived, we finished the beautiful hike back to Maroon Lake taking in the views of the surrounding area.  We got rained and hailed on briefly, but nothing too serious.  The descent of South Maroon took us 5 hours and 30 minutes.  Counting 25 minutes on each summit, it was a 13 hour and 35 minute day.  This was the most technically challenging hike I have been on.  There is lots of class 3, enough class 4, and even some class 5 climbing if you want it.  However, we all agreed, that it wasn't as difficult as expected. 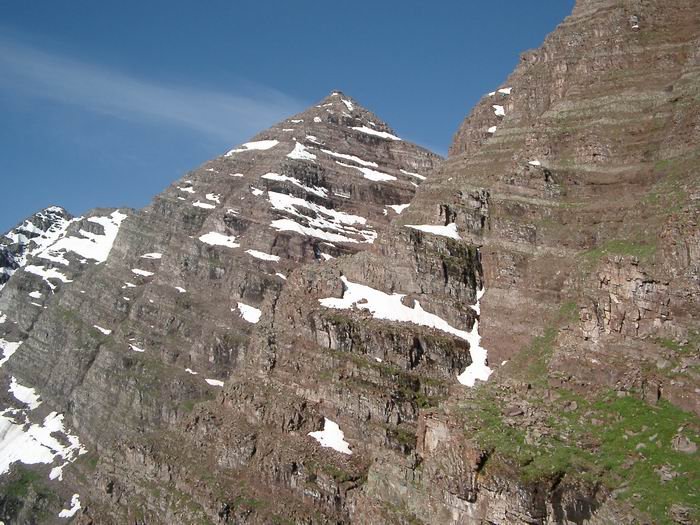 South Maroon Peak from where we entered the second gully. 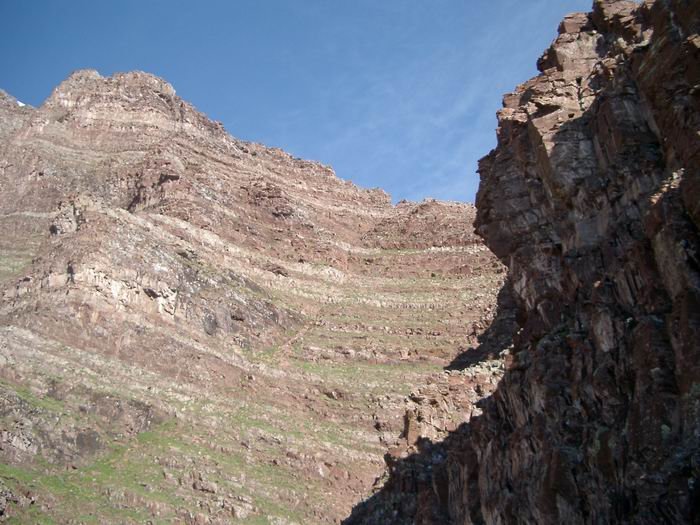 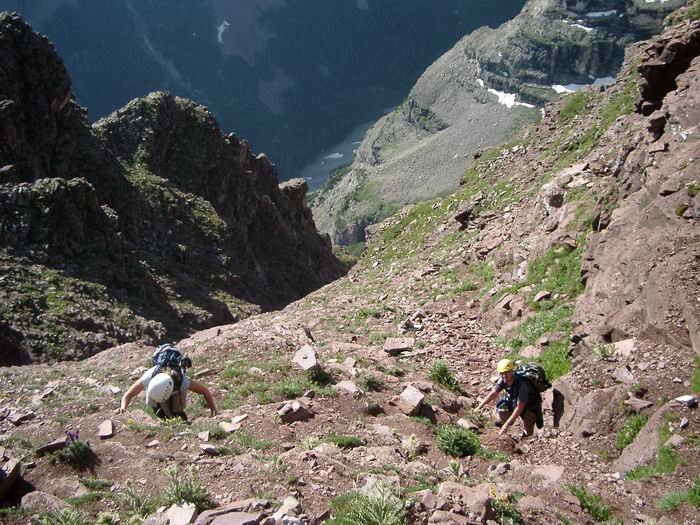 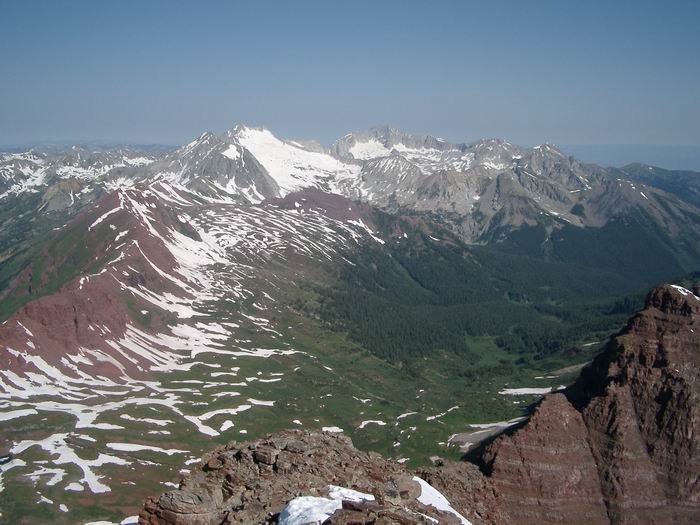 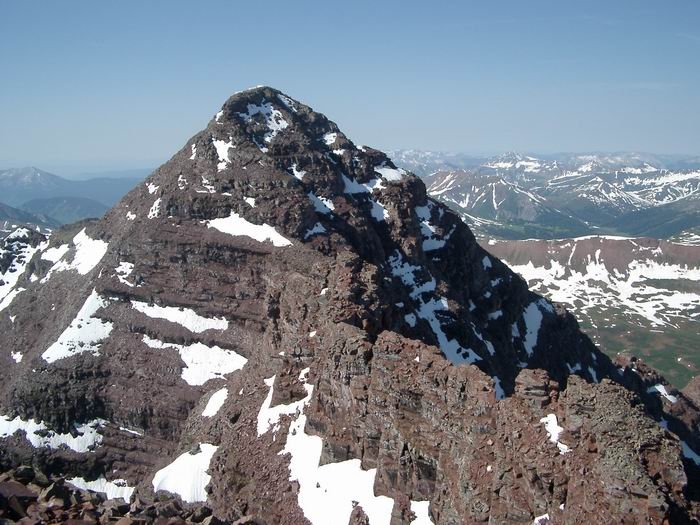 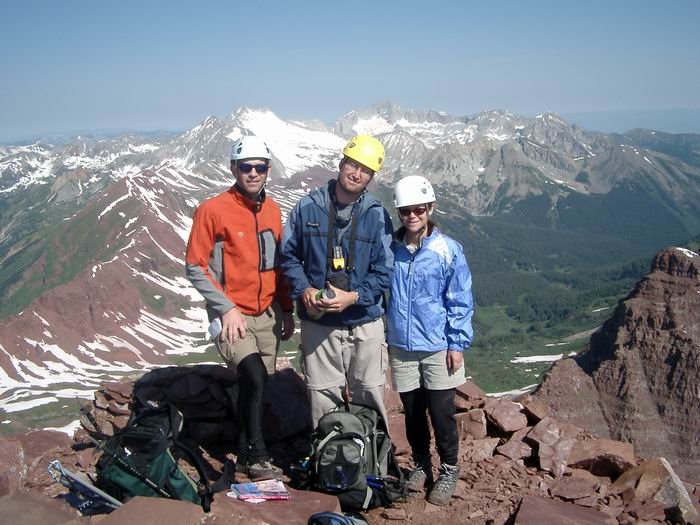 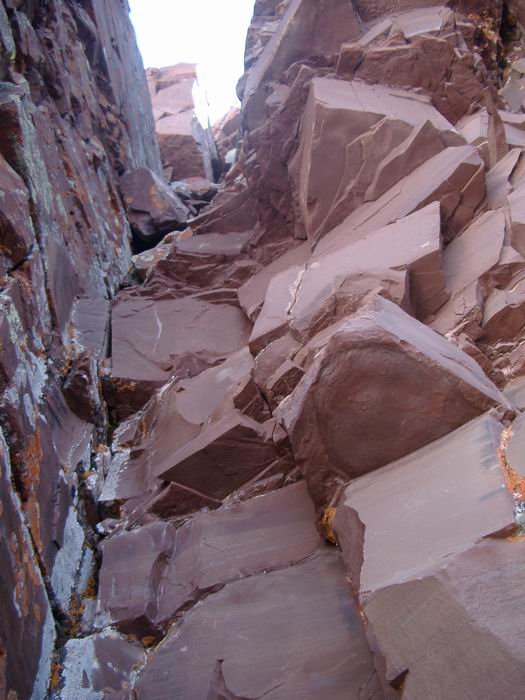 The chimney I down-climbed at the first crux. 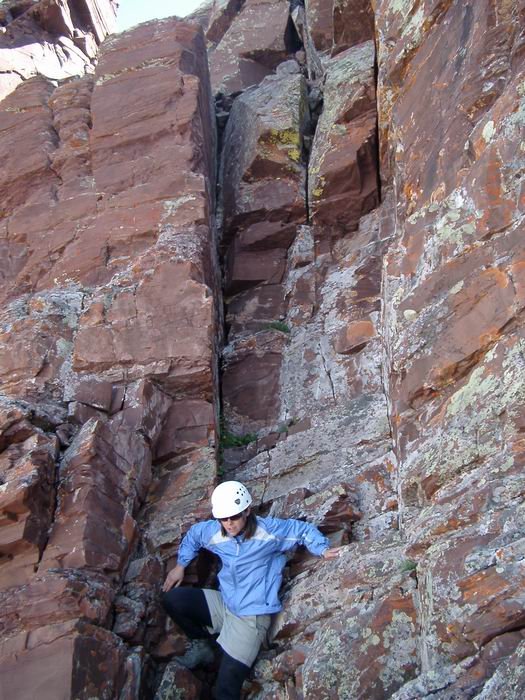 The chimney Mark and Sara down-climbed at the first crux. 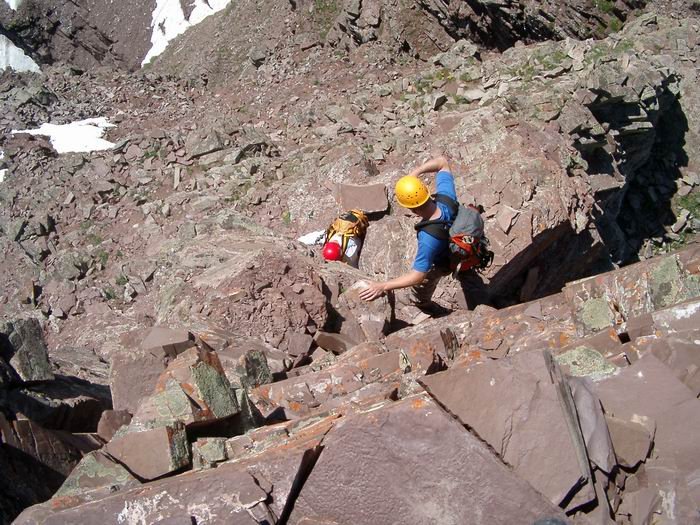 Looking down at the second crux as a party ascends. 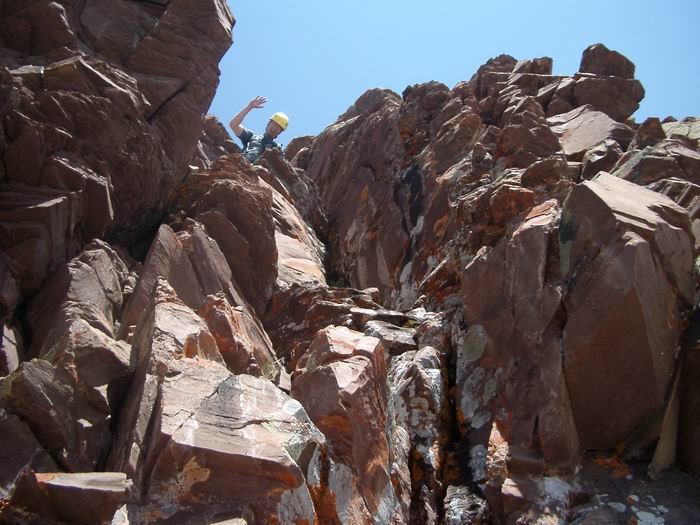 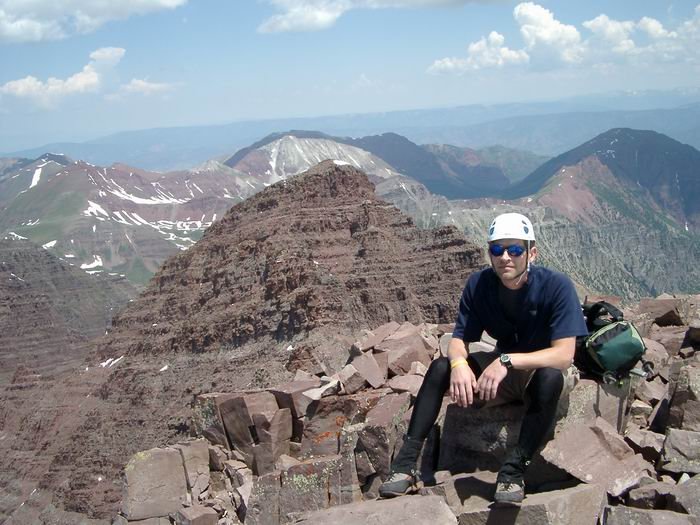 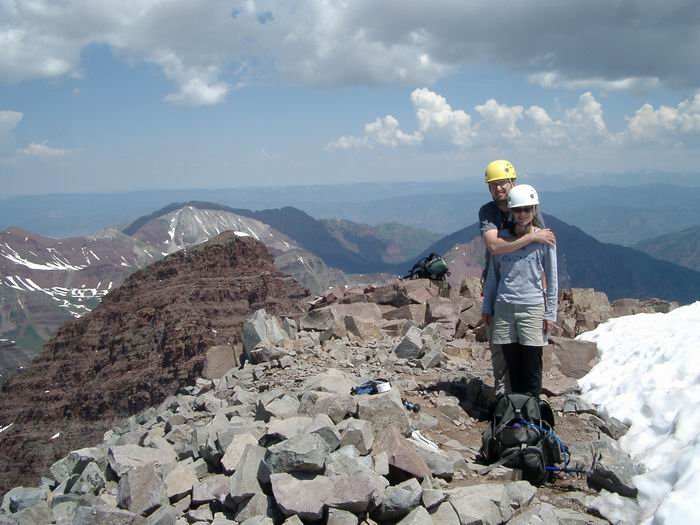 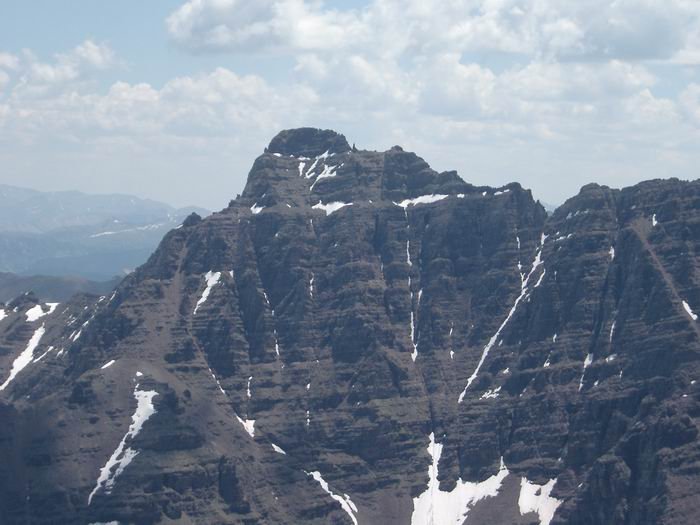 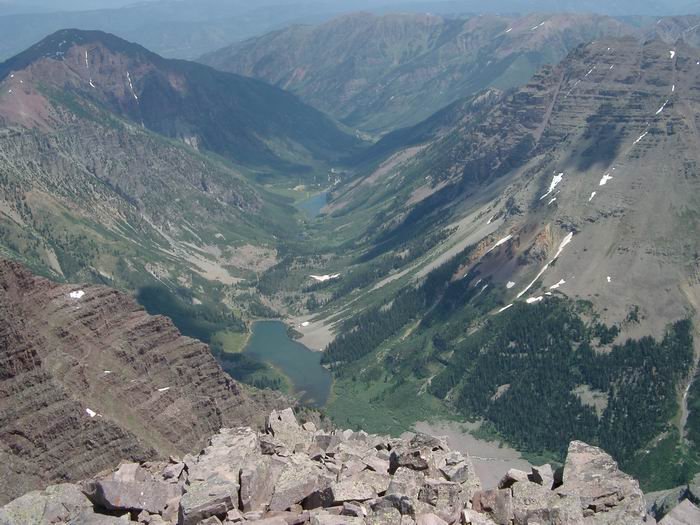 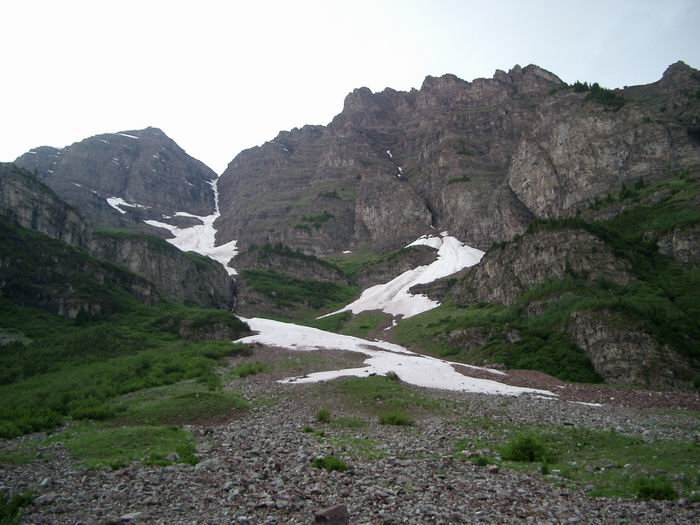 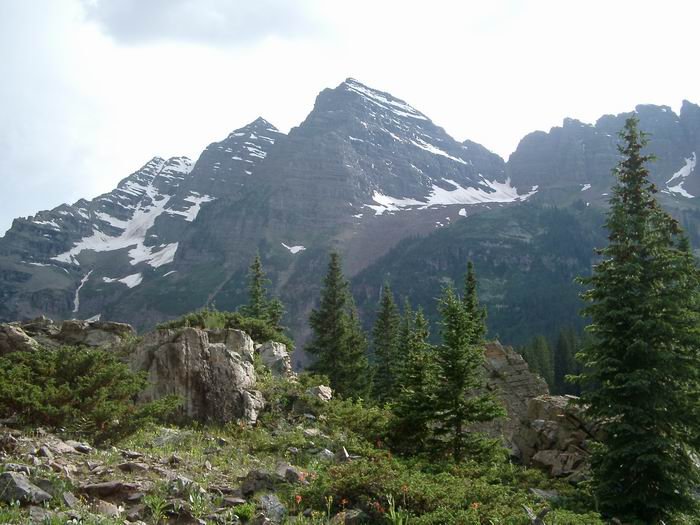 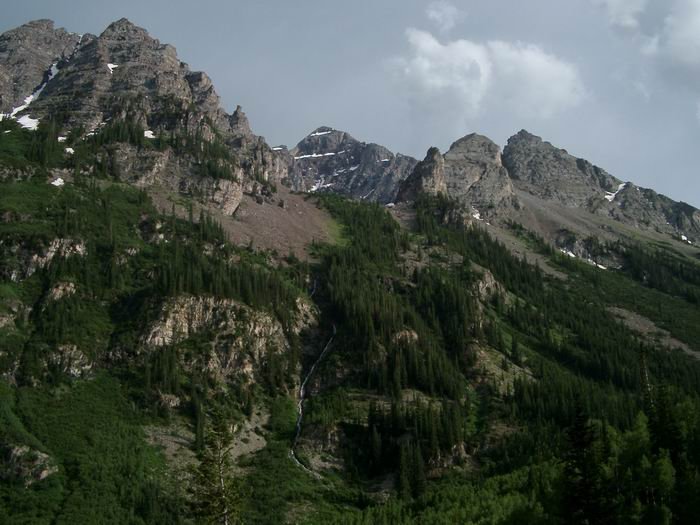