Brandon picked me up at the Las Vegas Airport while driving to Lone Pine, California, from Salt Lake City, Utah.  We met Chuck, Mark, and Renee at the ranger station in Lone Pine, California, after they made the drive down from Boise, Idaho.  After getting our permits, we drove up to the Whitney Portal to get a camping spot, rent our bear canisters, and have a burger.  We visited around a fire for a while before calling it a relatively early night.

We awoke the next morning and quickly prepared our large backpacks.  The scale at the trailhead indicated I had the heaviest pack at 41 pounds, while Renee was the lightweight winner with only 25 pounds.  The first hour of backpacking was slow as we played leap frog with other groups and tried to find a pace for everyone.  After a while, Mark and Renee cut Brandon, Chuck, and I loose, and we broke into two parties.

Once at Trail Camp, we found an adequate location for our three tents and Brandon and I began to scramble up the south side of Wotans Throne.  We had limited knowledge of the route, but we managed to make the summit.  After smearing up some slabs above Trail Camp, we scrambled up a loose scree slope to a headwall.  After climbing a bit to the left and running into a dead end, we back tracked to the top of the scree slope to analyze the route to the right.  There was a very well protected and narrow chimney that I worked my way up and Brandon followed after throwing his day pack up to me.  We scrambled a short distance and encountered another moderately difficult section of climbing on some steep slabs above and to the right of the chimney.  After this, it was easy scrambling to the summit.

I wasn't able to find a route rating on Wotans Throne, but from my experience in Colorado, I would have rated it class 4 with the two more difficult sections. The upper section may have been avoidable.  They probably aren't rated that high in California, but I haven't quite figured out the differences in scales yet.  After radioing Chuck in camp, we decided to head down.  The north and northwest slopes appeared as though they would be easy to descend and then we would just have to circle around to the west to return to camp.  Brandon agreed, so that is exactly what we did.  The northwest slopes made for a quick descent and avoided the technical climbing experienced on the way up the south route.

We had dinner and went to bed early.  I am generally concerned about low blood sugar reactions in the back country, so my food bag is usually loaded with lots of sugar.  To further avoid problems on summit day, I didn't take my late night insulin shot in anticipation of a relatively big hike the following day.  This ended up being one of the biggest mistakes I've made with regard to hiking and my diabetes.

Brandon and I started up the switchbacks shortly after 5:00 the following morning.  On our first break, I indicated to Brandon that I wasn't feeling well.  The next stretch went better until about 500' below the summit.  Extreme thirst and fatigue were slowing me down considerably.  I made the with no celebration as I continued to feel poorly.  We passed Chuck on our way down.  He was only an hour behind us.  We told him we were going to still try Mount Muir and that he should wait for us near the base of the turnoff for this peak.  My condition worsened as we approached the cairn and climber's trail for Mount Muir.  I tried to recover by eating, but I wasn't able to force anything down.

The thought of some scrambling and climbing didn't improve my condition, but it did help my spirits and give me something to look forward to.  We scrambled up to the ridge crest where I pulled out our information and studied the route.  Similar to Wotans Throne, we initially made one wrong decision, but then nailed the route after retreating a short distance.  Again, I'd easily rate the last 50' of climbing class 4, but the only information I found on the internet had it at class 3.

After down climbing to the Whitney Trail, I worked my way back to Trail Crest struggling with the 120' of gain.  Chuck and Brandon arrived shortly, and I indicated I'll likely need some of their water to get down.  They were both feeling great and agreed to help me out.  I had to break every 15 minutes and wasn't improving.  We were all speculating on what was wrong.  It could have been dehydration, over-exertion, heat exhaustion, or low blood sugar.  All of these were reasonable diagnosis; however, I had my doubts regarding all of them.  Finally, about half way down the switch backs, I told them that the thirst and fatigue were symptoms of high blood sugar levels.

I said we just need to get back to camp so that I could take a shot of insulin.  In my confusion, I forgot I had my insulin and diabetes kit in my pack along with me.  After Chuck and Brandon lightened my load and took some of my gear, we hiked for another 10 minutes before I kneeled down and began puking.  It was a pretty good wretch and I lost at least the last liter of water I drank.  At this point, I think I scared Chuck and Brandon who thought the situation had just got serious.  Chuck took off down the trail to recover my insulin which I had, and Brandon took my pack and the rest of my gear.  I thought it was better to continue than to wait and rest.

I only took a couple of sips of water to rinse my mouth and finished the hike back down to Trail Camp with Brandon.  Chuck was scrambling to find my kit, which of course he finally found in my pack that Brandon carried down.  After checking my blood, I confirmed my suspicion with an extremely high reading.  I took a shot and rested.  About 1 hour and 30 minutes later, I got my reading down to a reasonable level and started packing up camp.  Given that it only took Brandon and I 2 hours and 30 minutes to hike out the 6.2 miles to the Whitney Portal, I feel like I recovered relatively quickly.

We went from the highest point in the lower 48 states (Mount Whitney) to the lowest point (Death Valley) in a 14 hour period.  We checked into the Stratosphere in Las Vegas, Nevada, around 12:30 at night.  We got a few weird looks walking down the middle of the casino in desperate need of a shower and a huge backpack on.   I still wasn't able to eat that night as I threw up again and my body continued to reject any food until the following morning.  Even then, my throat was sore from puking.  I basically hiked 17 miles and went 36 hours on nothing more than one GU packet and some water.

I realize that the valuable lesson learned on this mini-epic of mine really only applies to me, but I thought I'd share it anyway.  I still think Mount Whitney was pretty cool and thought the climbing to Wotans Throne and Mount Muir was the highlight of the trip. 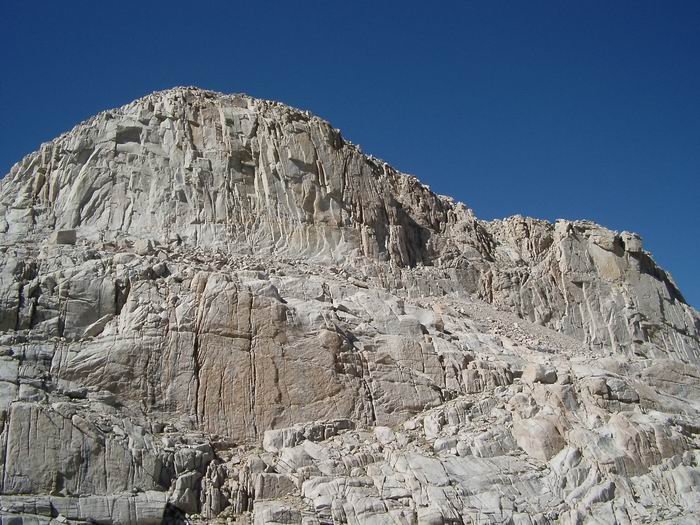 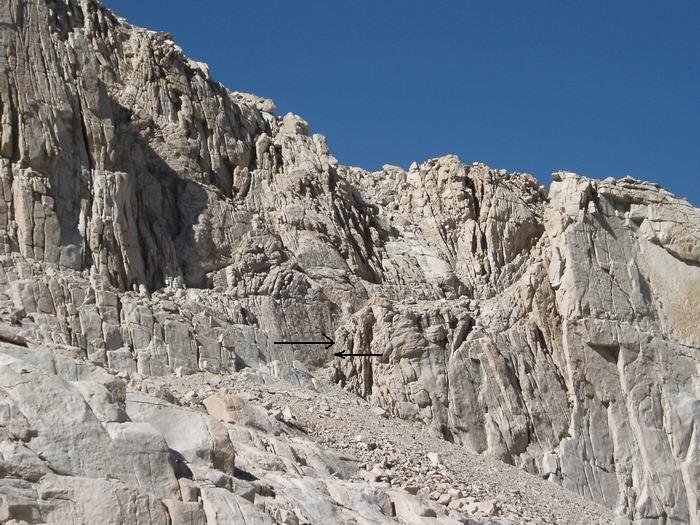 A close up of the chimney used to access Wotans Throne's south route. 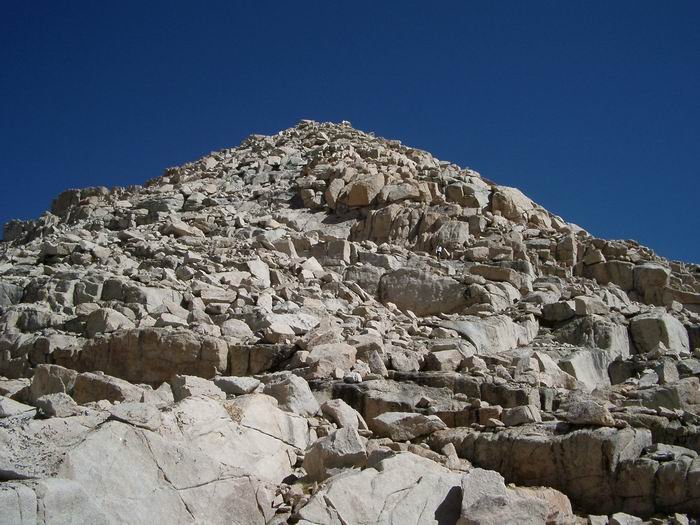 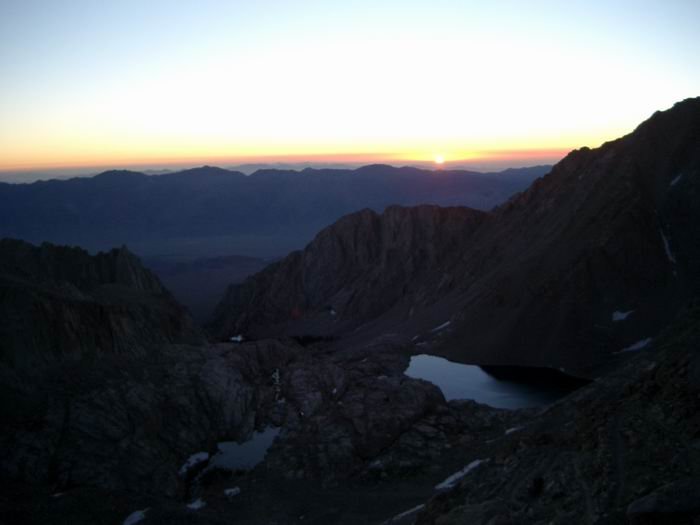 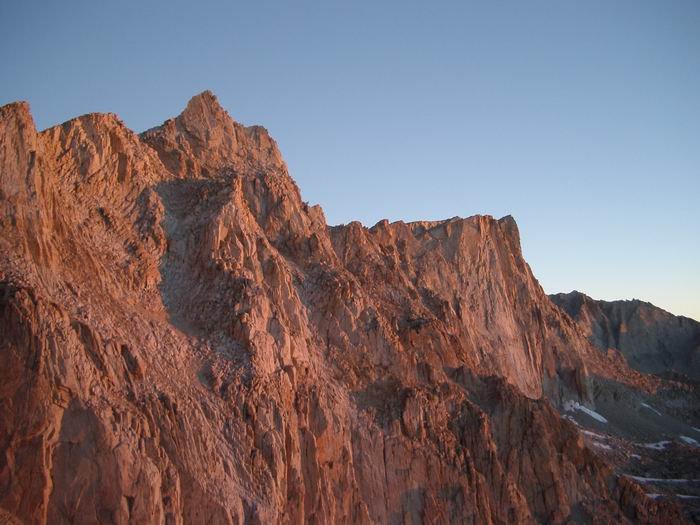 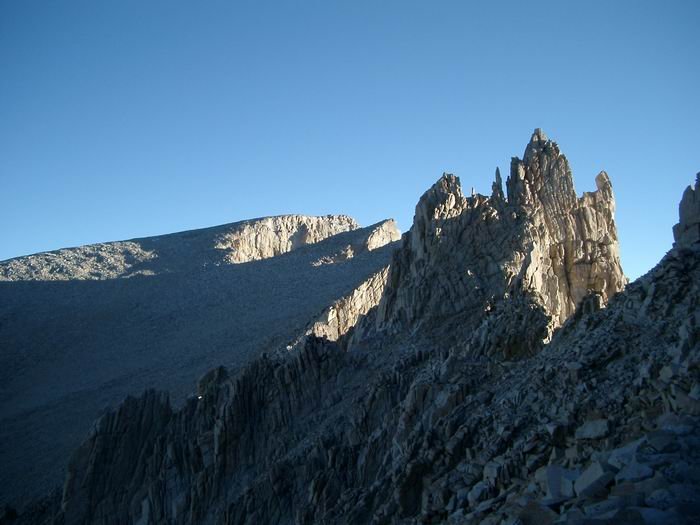 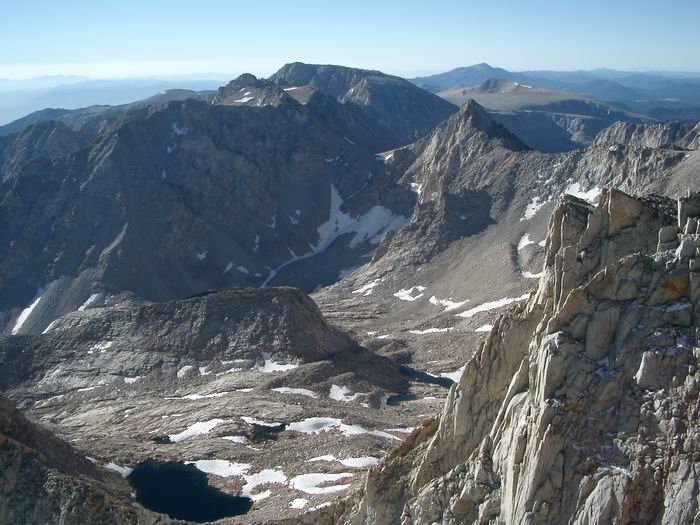 Wotans Throne in the center of the basin. 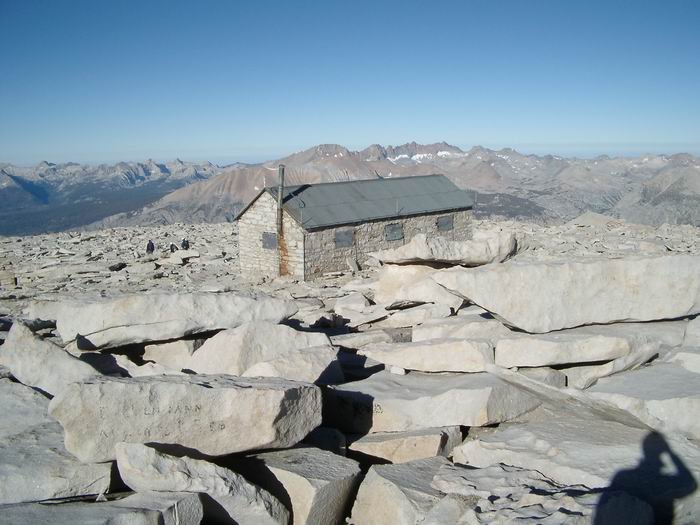 Cabin on the summit of Mount Whitney. 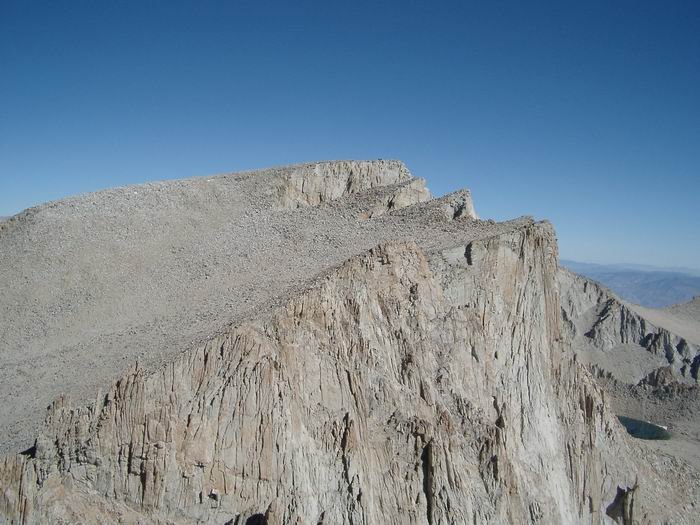 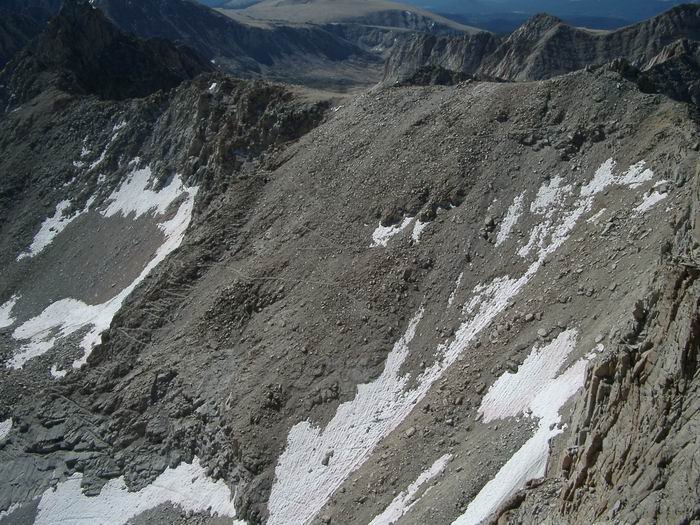