I backpacked in to Navajo Lake from the Navajo Lake Trailhead and was gently rained on for much of the hike.  By the time I reached the lake, the precipitation increased in intensity and I ended up sitting under a tree for over an hour before it let up enough for me to find an adequate camp spot.  The rain gear and pack cover came in handy once again.  I ended up on the northeast side of the lake in a small grove of trees right next to the trail.  I read a little, cooked dinner, and was sleeping early in the evening.

I had prepared my summit pack the night before, so I was hiking shortly after I awoke the following morning.  I hiked east into Navajo Basin and wasn't feeling in top form.  As I started up Mount Wilson's north slopes, I finally noticed at least two other parties ahead of me.  The climbing is straightforward, although I feel as though I started to traverse to the southwest a bit early.  I gained the notch that allowed me to look into Kilpacker Basin and knew the crux was right above me.  I stayed directly on the ridge to the summit where four others were already enjoying their morning.

I'm not sure if I'm loosing my nerve, or just becoming a bit wiser, but I have started limiting my solo hiking on more difficult trips.  I had posted for a partner for this trip with no response, so I basically decided one peak would be enough.  Two ladies on the summit came from Silver Pick Trailhead.  The other two climbers (Tony and Maggie) were a married couple from Salida, Colorado, who were also camped at Navajo Lake.  I nonchalantly asked what was on everyone's agenda for the day.  The females said they were going to climb Wilson Peak on their way back to Silver Pick, and Tony indicated that he and Maggie were entertaining the idea of the traverse to El Diente Peak but weren't certain.

Before Tony finished his sentence, I quickly told him I was in.  They had not yet committed to the traverse, but after a brief conference they decided to go for it.  I think the fact that El Diente was one of three remaining 14ers for the couple made the decision slightly easier.  So after quick introductions we were off.  We quickly made it back to the notch where my second of four great fourteener traverses would begin.

Oddly enough, our greatest route-finding difficultly of the entire traverse occurred within 10 minutes of beginning.  As I began climbing to the coxcomb described in in guidebooks, we questioned whether we had dropped far enough.  I decided to climb up and scout the route before we all continued.  I felt comfortable and then noticed a cairn.  I indicated that I was certain we were on the right track.  The exposure on certain areas of the ridge is extremely fun and enjoyable.  The two major areas where you descend off the ridge to the south are well cairned.  Tony and I evenly shared the lead for the entire traverse.

We worked around the Organ Pipes, crossed over to the north side of the ridge, and made the summit.  This was a truly pleasing climb with some great people.  I especially liked the complement from Maggie who thought I was 17 years old.  I guess glacier glasses conceal a lot.  We didn't stay long and debated our descent route.  I was fairly set on El Diente's north slopes.  Tony and Maggie agreed that it was the most direct way back to camp; however, our only concern was that the north couloir was still full of snow.

We traversed back under the Organ Pipes on the south side and gained the ridge at 13,900'.  We crossed over to the north side and descended to the headwall of the couloir.  The rock above the couloir was extremely loose, and the snow was much harder and steeper than anticipated.  I ventured out on the snow, but didn't feel comfortable.  As I climbed back to Tony and Maggie's position, I asked Tony to survey the rib to the west of the couloir.  After a quick analysis, Tony thought it would go and I concurred.  Tony made short work of the small ridge with great route-finding to get us to a smaller snow field to the west of the main couloir.  At this point, we caught a short glissade of 300' to 400' and were quickly back in Navajo Basin.  I said farewell to Tony and Maggie as I quickly hiked back to camp, packed up, and essentially ended up backpacking out in the rain just as I had backpacked in.

If I were to do it over again, I would absolutely do the route in reverse order.  Not because I think the traverse would go easier (I feel it would be the same either way), but because you could get an awesome snow climb in with the traverse and descend an easier class 2 route on Mount Wilson's north slopes.  I felt as though the couloir was still in good climbing condition and it was near the end of August.  In terms of difficulty, I thought the Wilson/El Diente traverse was less technical and shorter than the Maroon Bells traverse.

It took me 2 hours and 45 minutes to backpack into Navajo Lake from the Navajo Lake Trailhead.  It was 2 hours and 50 minutes from Navajo Lake to Mount Wilson.  The traverse took 1 hour and 40 minutes.  I forgot to measure the time it took from El Diente back to Navajo Lake, but I am certain that it took longer to descend El Diente Peak than the traverse.  Gravity didn't help much on the severely muddy trail as I slopped back to trailhead in 2 hours and 30 minutes.  I'm not sure if my statistics are accurate for this combination either. 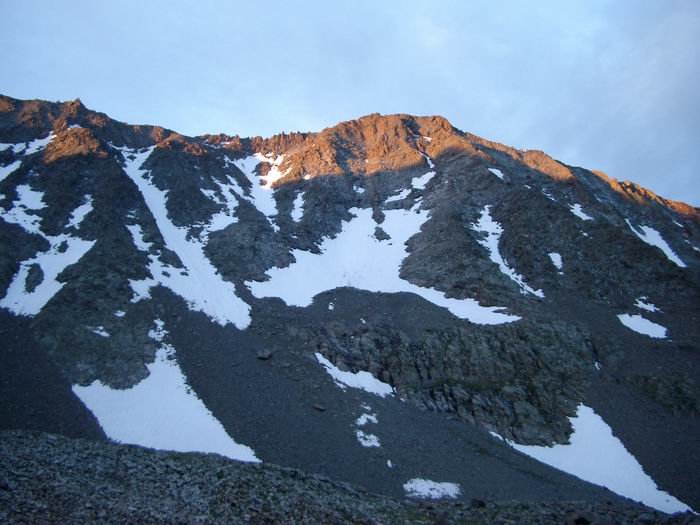 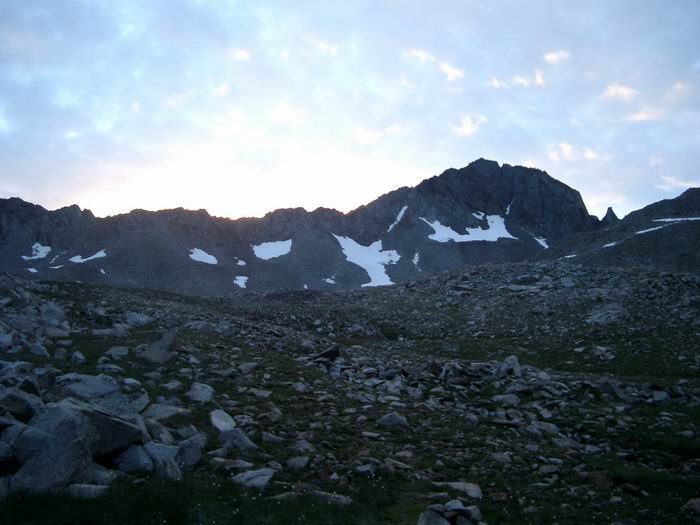 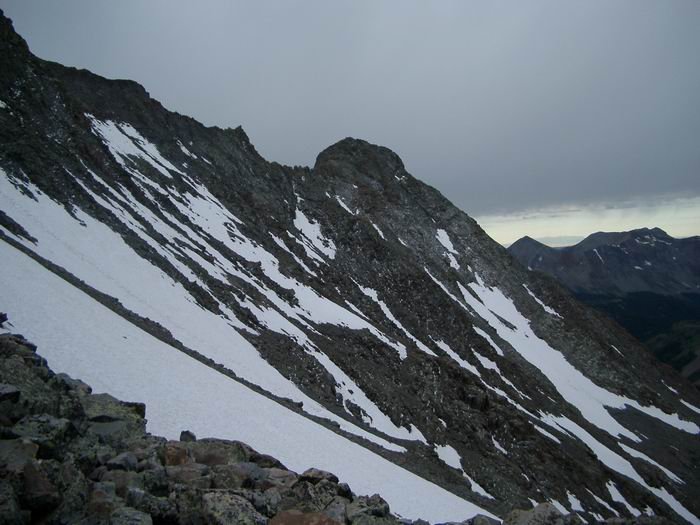 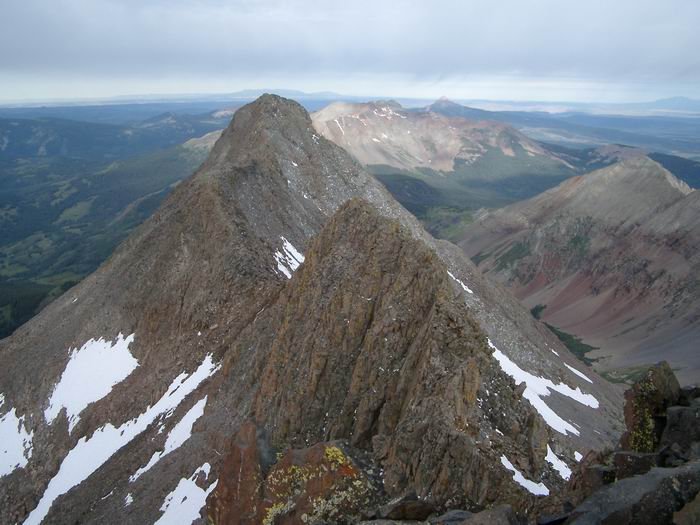 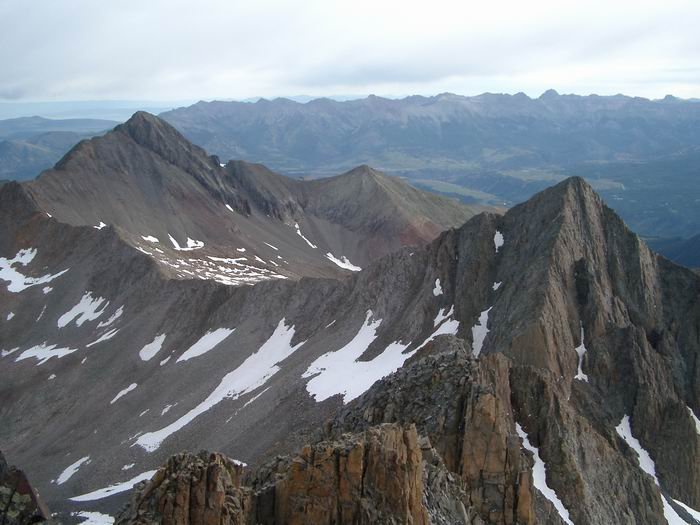 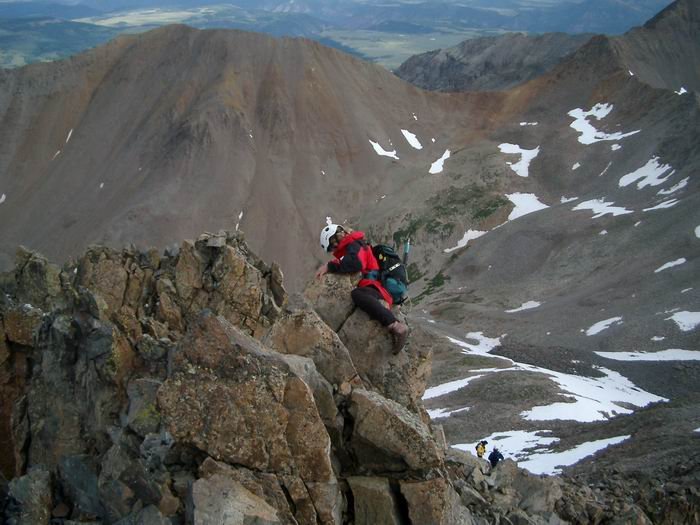 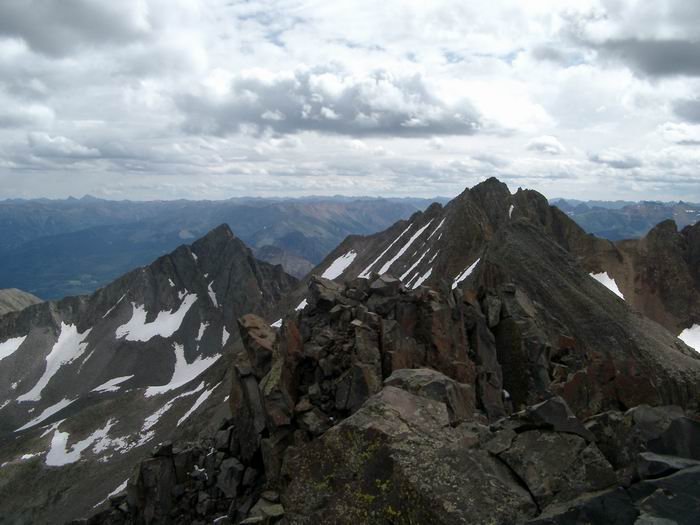 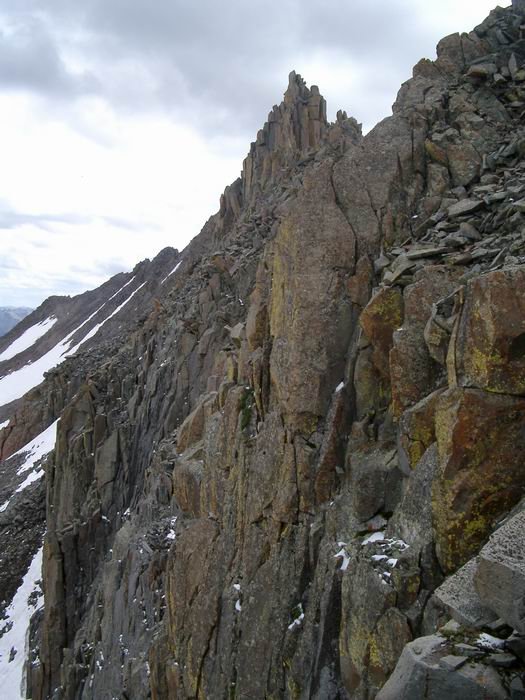 Headwall at the top of the North Couloir of El Diente Peak. 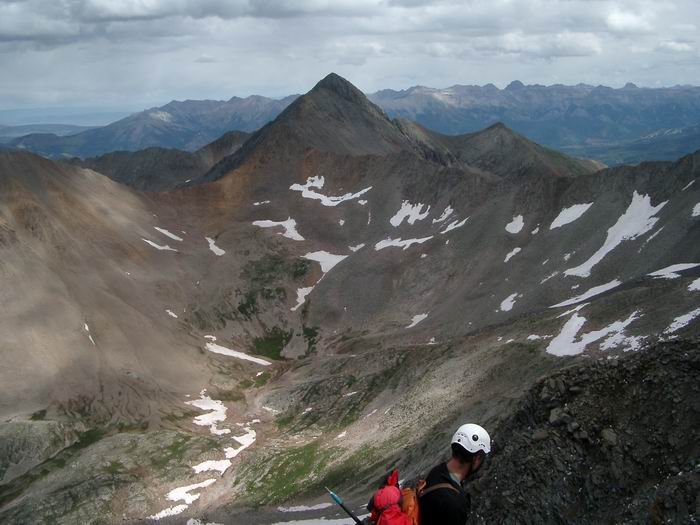 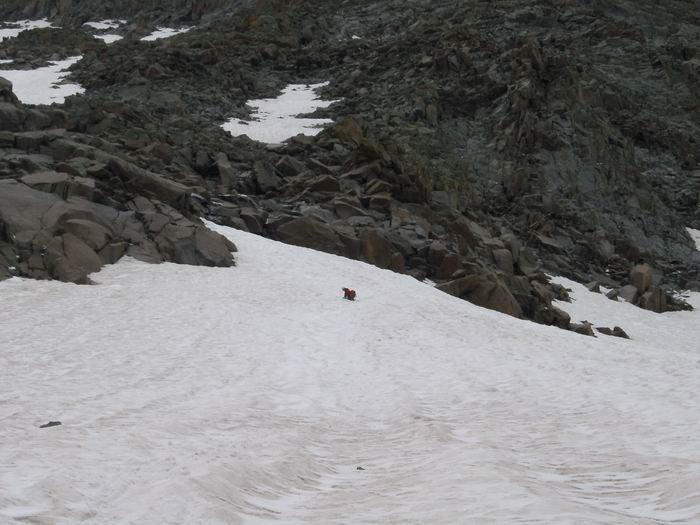 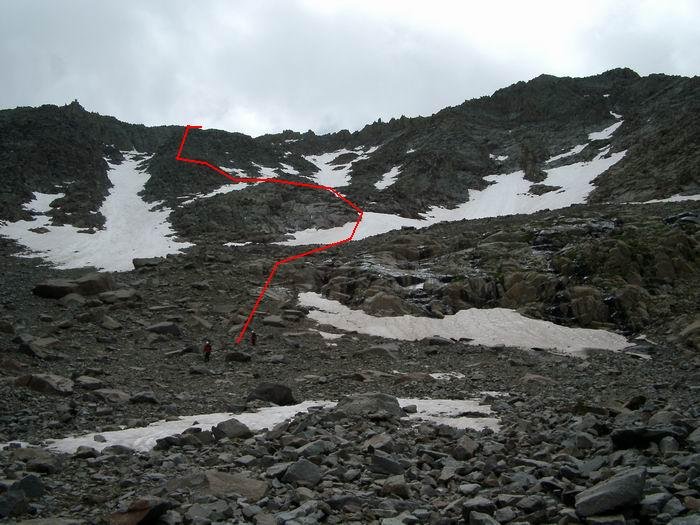 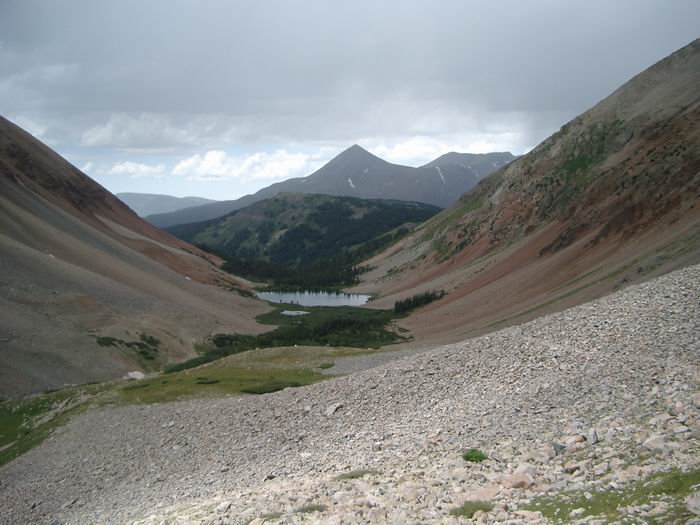