This was a consolation hike that turned into a scouting hike that should have been a climb of Mount Machebeuf.  I had originally planned on hiking Square Top Mountain from Guanella Pass today.  Unfortunately, when I got to the pass, the wind was blowing extremely hard and there were about 15 search and rescue vehicles in the parking lot.  I wasn't sure if they were training or if they were looking for someone.  I observed from the Trooper for about a half an hour until someone walked by and I asked what was going on.  The person informed me that they were looking for a hiker who was supposed to be back Saturday night; it was Monday morning.  I didn't want to add confusion to the problem, and I was not very anxious to start hiking in really strong winds, so I drove back to Georgetown, Colorado.

I was bummed about driving into the mountains and not doing something.  I thought briefly about St. Marys Glacier again, but I'd already been up their a couple of times.  Then, I remembered a fork in the Mount Parnassus trail from last week.  A co-worker told me it went to Herman Lake.  I decided to settle for a nice snowshoe hike below tree line to avoid the nasty weather.  I was the first one up the trail on Presidents Day at 9:30.  I had lost time due to the detour to Guanella Pass, so I figured I'd go as far as I wanted.  A little less than one mile into the hike, I noticed an interesting ridge to the north of Herman Gulch.  I knew Mount Machebeuf was also to my right, so I was looking for a possible route for future reference.  The ridge was mostly clear of snow and looked challenging.

After approximately 1.5 miles, I decided to leave the comfort of a well-packed trail and start scrambling up a loose and partially snow-covered scree slope.  I was now slightly past the ridge on the trail and could see the somewhat protected gully on the west side of the ridge.  There was bare scree up to the base of the rock ridge, so this route provided the easiest access.  I only had to wade through thigh deep snow for a short distance before reaching the slope.  The terrain was more steep and rotten than expected.  I cached my snow shoes once on the rock to check out the climb.

I struggled up the loose scree to the ridge which consisted of solid rock.  I was a bit uncomfortable crossing the slope right at the base of the rock ridge, so I followed the gully up a couple of hundred feet on the left side of the ridge until it turned east up a large chute.  I scrambled up the chute and gained the ridge.  I could now look back southeast down Herman Gulch.  The rock dropped off precipitously and I was now standing on the ridge that I had eyed when down on the trail.  The Herman Gulch trail was becoming more busy as I watched several snowshoers pass below me.

Although the ridge above me was much more stable than the talus I had just ascended, it looked fairly steep and was class 3.  Add in the fact that the wind was blowing , some snow existed on many of the ledges and cracks, and I was in heavy stiff-soled boots made things even more interesting.  I assumed I would get up a couple more hundred feet and cliff out.  However; each time I thought I was stuck, I found another route.  The climbing was constant and fun.  I kept telling myself that I'll go just a bit further to see the rest of the ridge.

Before I knew it, I was at the top of the rock looking down a steep couloir.  Just above me, the slopes of Mount Machebeuf leveled off and the summit was only a stroll away.  I had to cross the couloir without an ice axe to be certain of the final section to the summit, but some big horn sheep had made a slight path across it that I followed.  Once on the other side, I was able to see that the climbing was over and this was a viable route.  Since I knew I could make it through the rocks and wasn't sure if what I was looking at was the actual summit, I called it a day and returned home.  When I finally looked at the map and realized I was only 325' from the top, I was a bit perturbed.  Especially given the fact that I had made it through the most difficult section of the hike. 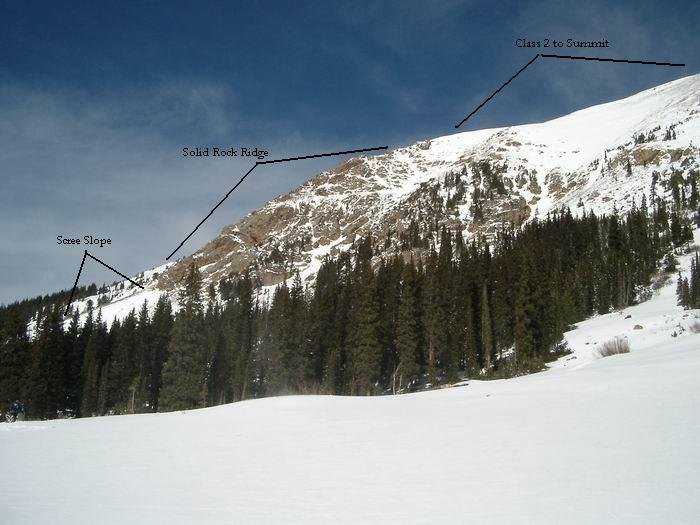 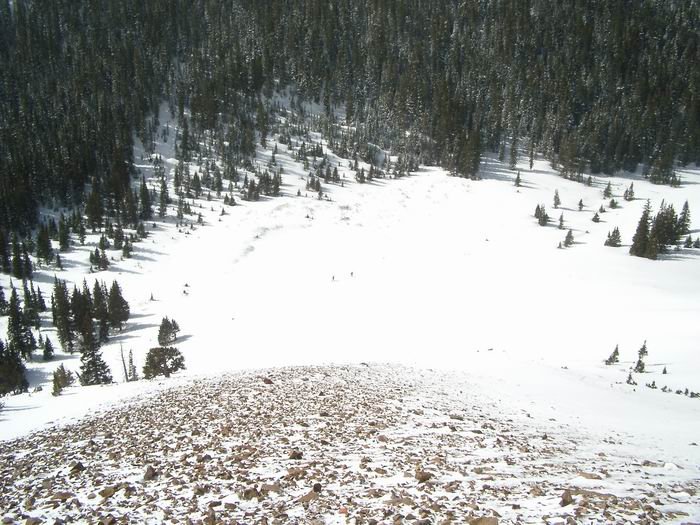 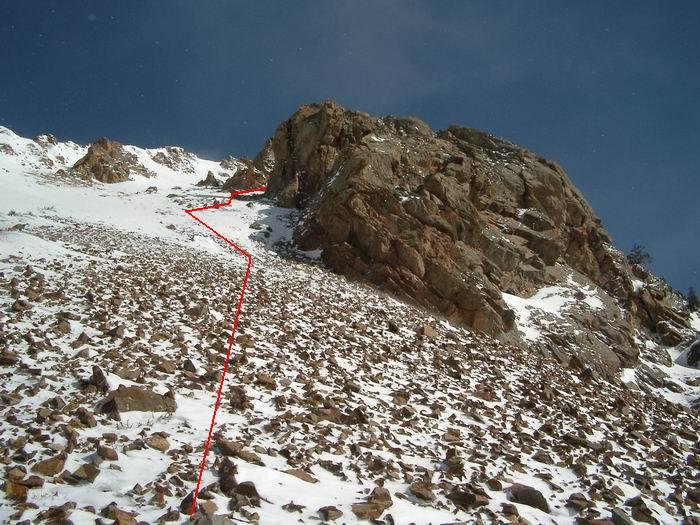 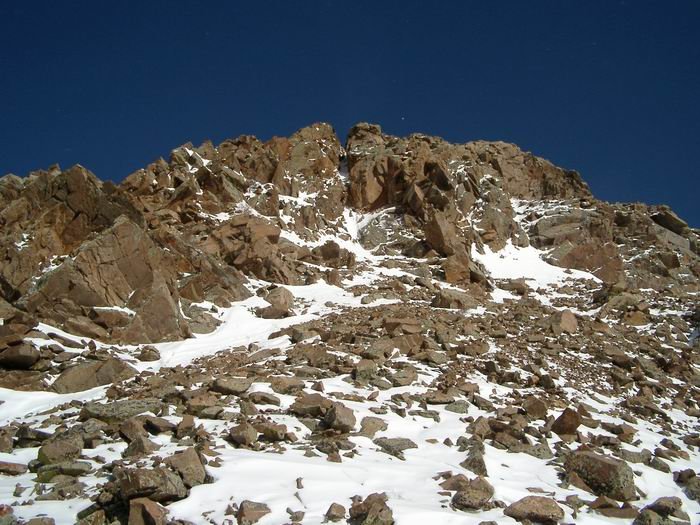 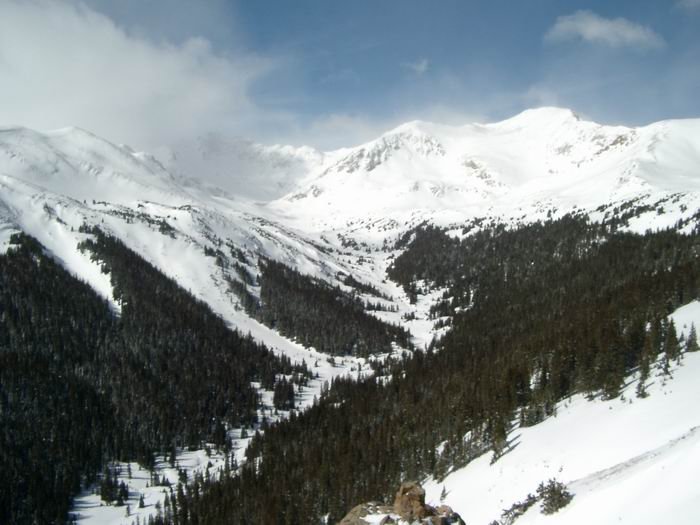 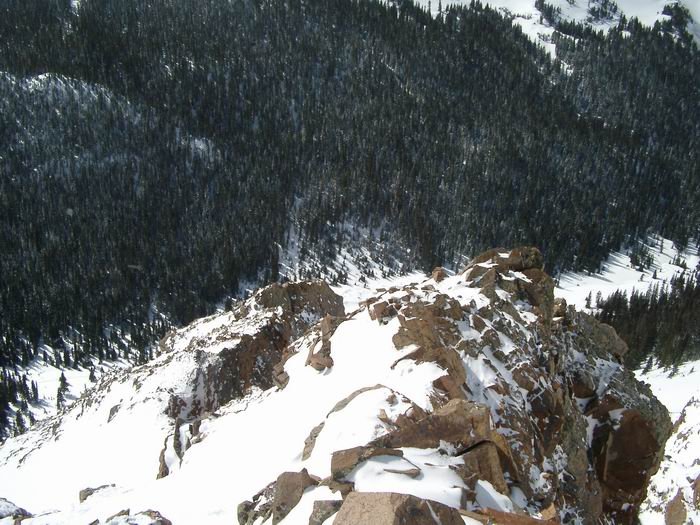 Looking down the ridge. 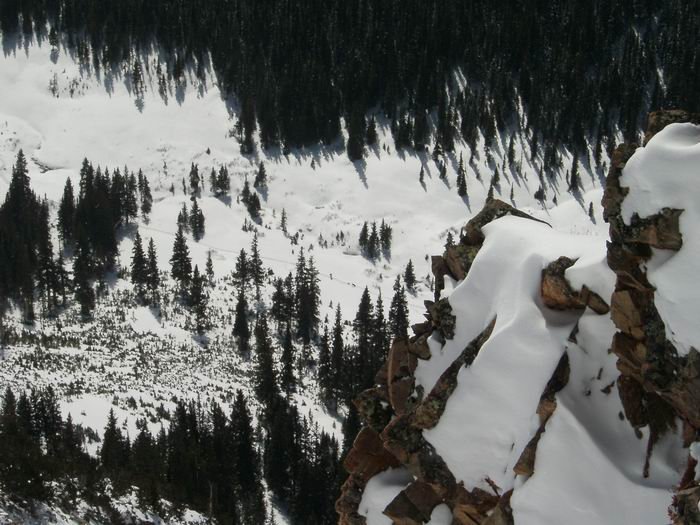 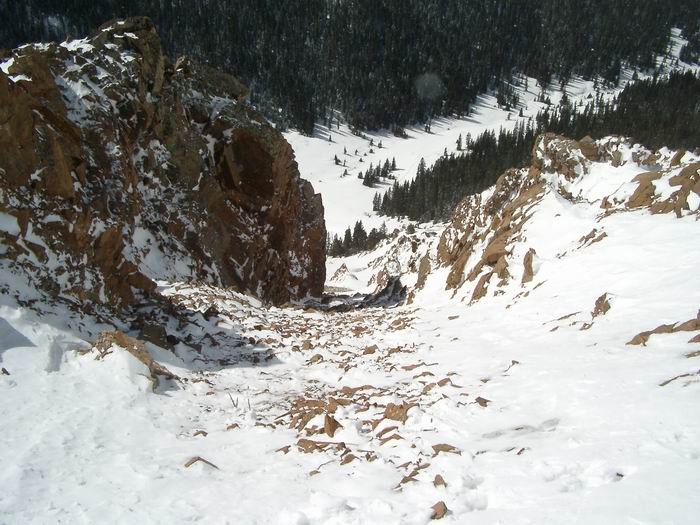 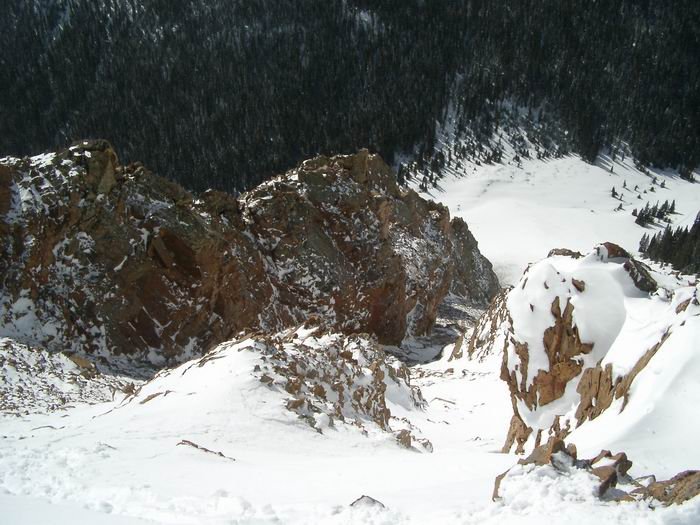 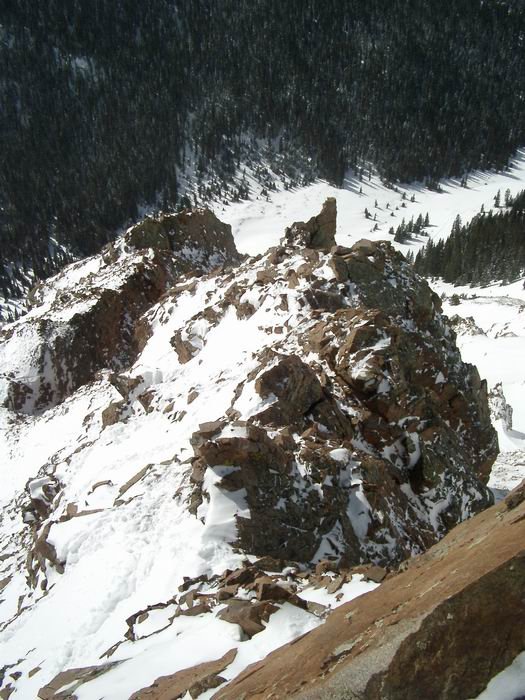 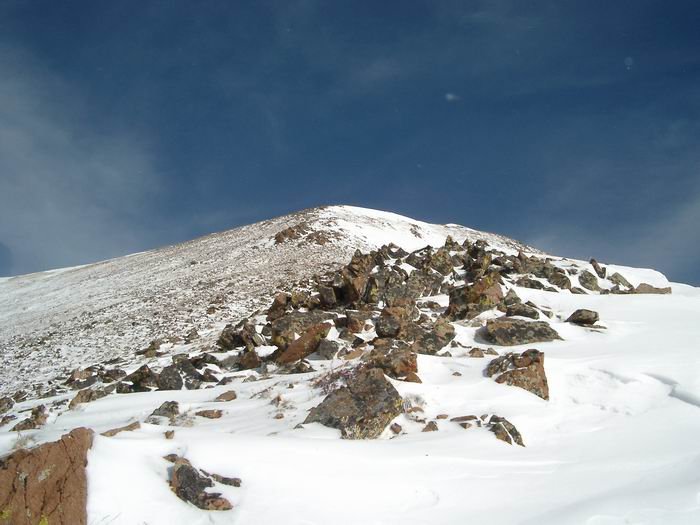