Mount Evans is considered an easy 14er with many tourists visiting via the paved road that leads to the summit.  This was my last Front Range 14er, and I chose a route that basically circles the entire peak and results in hike that is a bit more difficult than many of the standard routes.  I decided to sleep in until 4:30 and get a later start than I had on my last couple of climbs.  I reached Summit Lake shortly after 6:00 and was hiking at 6:30.

I had originally planned on starting from the saddle between Mount Evans and Epaulet, but the Colorado Department of Transportation closed Mount Evans Road at Summit Lake earlier in the week.  As a result, I started from the lake and hiked up the road for over a mile before heading over to Epaulet Mountain and Epaulie.  These aren't particularly spectacular peaks, but they are named and mentioned in the guidebook, so I decided to check them out.  The first couple hours of the day were cold and windy, and I wasn't feeling too good or enjoying myself.  By the time I was descending the gully towards the valley that Abyss Lake sits in, it had warmed up significantly and I started to feel better.

The gully was full of loose rock but wasn't too difficult to negotiate.  I reached the unnamed lake at 12,360' and began climbing directly west just to the left of Point 13641 on Mount Bierstadt's east ridge.  I now felt better on this steeper section than I did on Mount Evans Road.  I quickly gained the ridge and passed a couple of hikers completing the same loop I was minus Epaulie, Mount Epaulet, and Mount Spalding.  Mount Bierstadt's east ridge was definitely the high point of the day.  I felt as though the class 3 climbing in this section was more difficult and fun than the Sawtooth.

The crux of the ridge is Point 13641.  I tried to go directly over it, but got hung up on a ledge and ended up skirting around to the north before regaining the ridge and reaching the point.  From here the climbing decreases in difficulty and Mount Bierstadt is in full view for the rest of the hike.  The summit was crowded and from the conversations I overheard, everyone had come from Guanella Pass.  I remained on the summit only long enough to eat, drink, and take a few photos.  It was turning out to be a spectacular day in the mountains.

I dropped off Mount Bierstadt's north ridge to begin the Sawtooth traverse.  I didn't do much research on the route but found it relatively straight forward.   I stayed directly on the ridge until I approached the saddle.  I continued down and passed below the saddle unsure of where to begin climbing again.  After going over a couple of small ribs and bypassing some of the initial gendarmes, I picked up what appeared to be a faint trail and scrambled to the crest.  This was the correct decision, and from this point the route is well cairned as you hike across ledges on the west side of the ridge.  I climbed north again on some rotten rock before popping out on the flats north of the Sawtooth.

After completing the traverse the day turned into a slog.  I pulled out my trekking poles and hiked northeast to Mount Spaulding and then south to pick up Mount Evan's northwest ridge route.  There is a trail most of the way with huge cairns to guide you along the southwest side of the ridge crest.  Going from Mount Spaulding to Mount Evans took much longer than I anticipated as Mount Evans sits at the very east end of the ridge.  I shared the summit with six medical students from Denver who had taken the Summit Ridge route from Summit Lake.  I was unable to convince their group leader that descending the northeast face of Mount Evans back to the parking lot was going to be substantially quicker than retracing their steps back over Mount Spalding.  Not only is it much more direct, it's all down hill and you aren't required to regain any elevation.  I even felt that going down the road would be quicker.

The northeast face ended up being a trail most of the way and three individuals of the group ended up giving it a shot.  Other than contending with a bit of loose scree, it was an easy descent.  The beginning of this route is marked with a large cairn on the south side of Mount Evans Road about a half a mile up from Summit Lake.  It only took us 35 minutes to return to the trailhead.  Although this was my official climb of Mount Evans, I actually enjoyed Mount Bierstadt's east ridge and the Sawtooth the most.  My total trail time was 8 hours and 55 minutes. 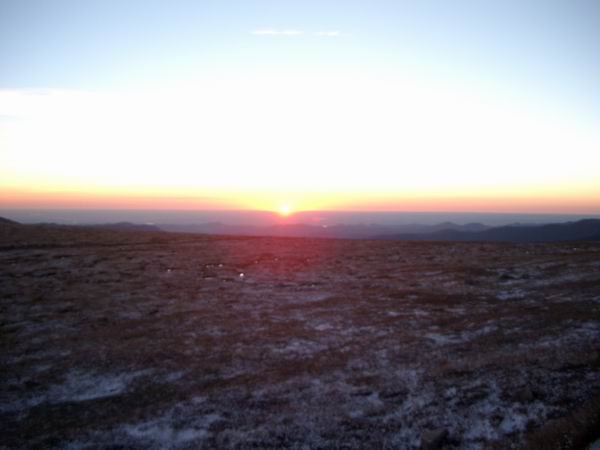 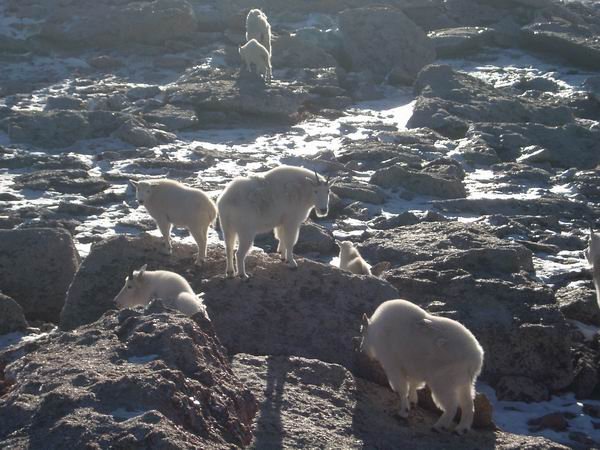 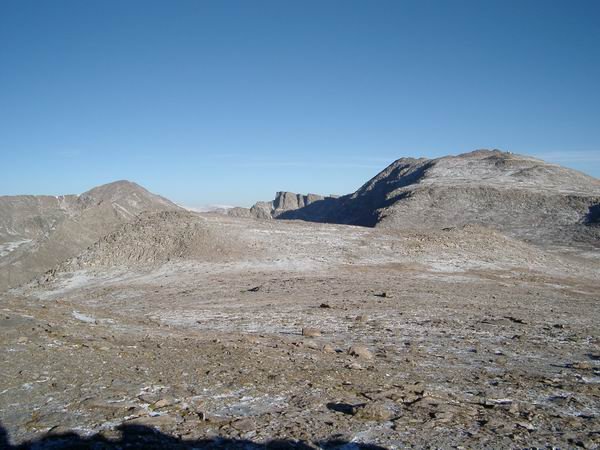 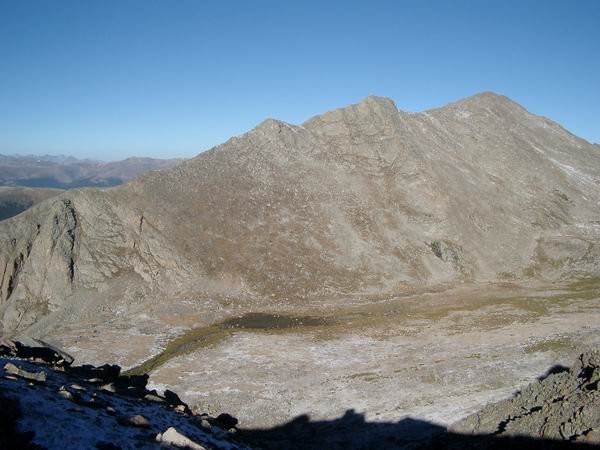 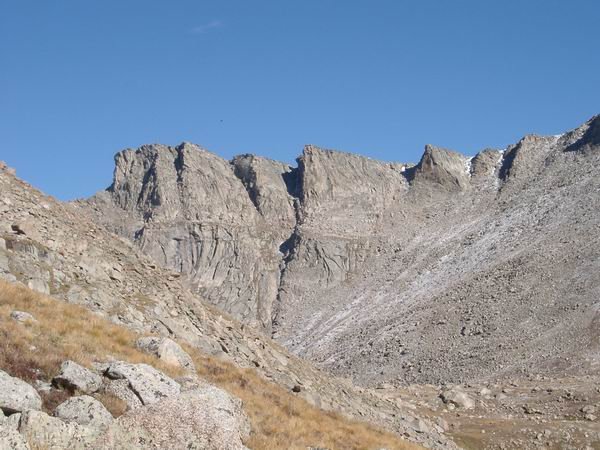 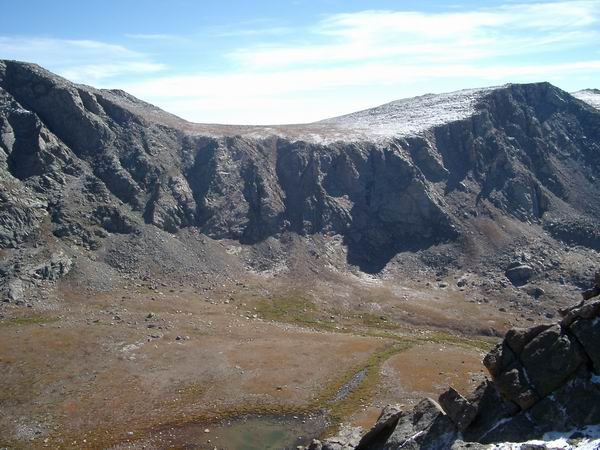 The gully I descended from Mount Bierstadt's east ridge. 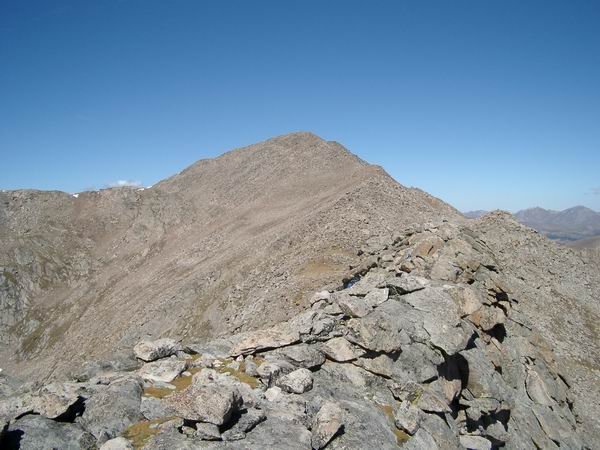 Mount Bierstadt from near Point 13641. 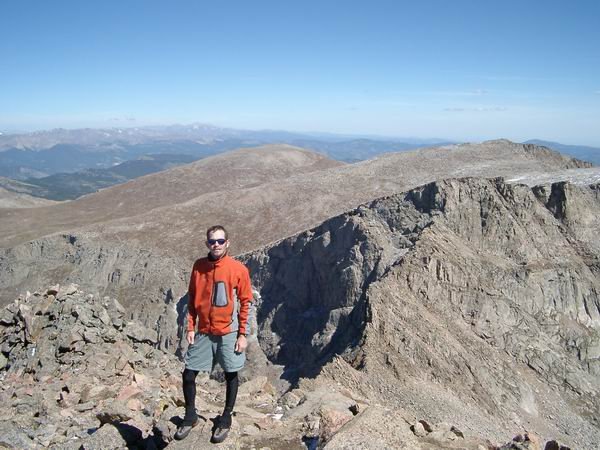 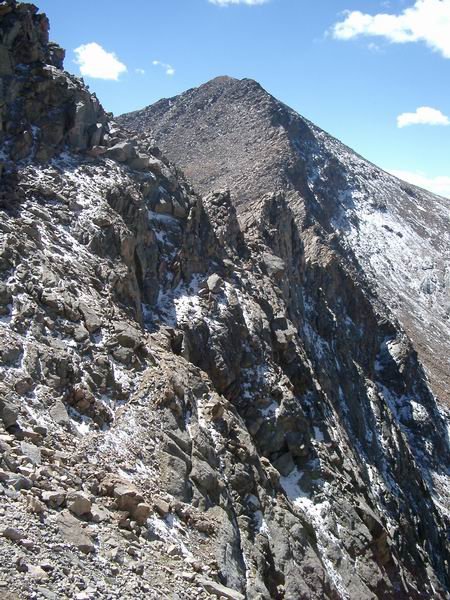 The Sawtooth and Mount Bierstadt 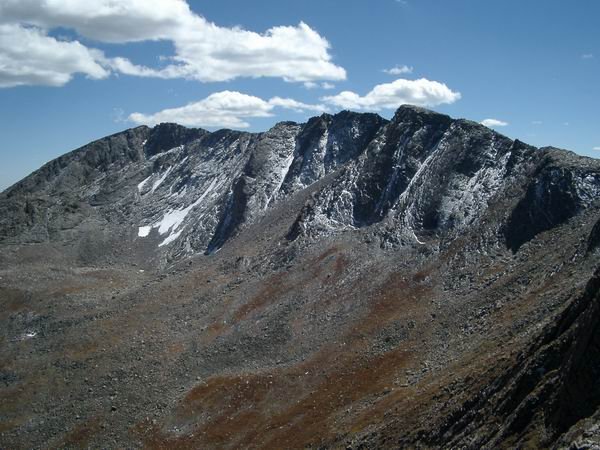 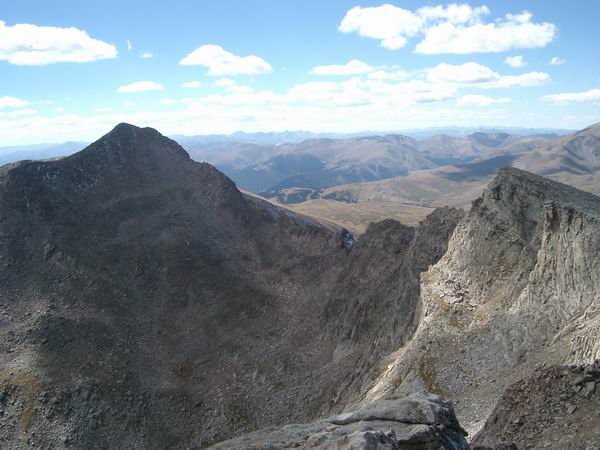 Mount Bierstadt and the Sawtooth from near Mount Evans. 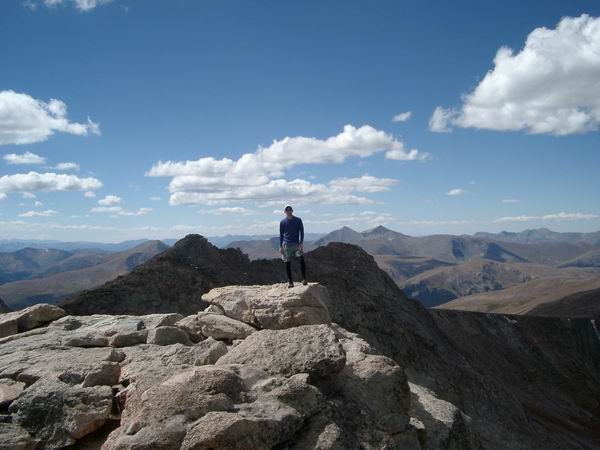 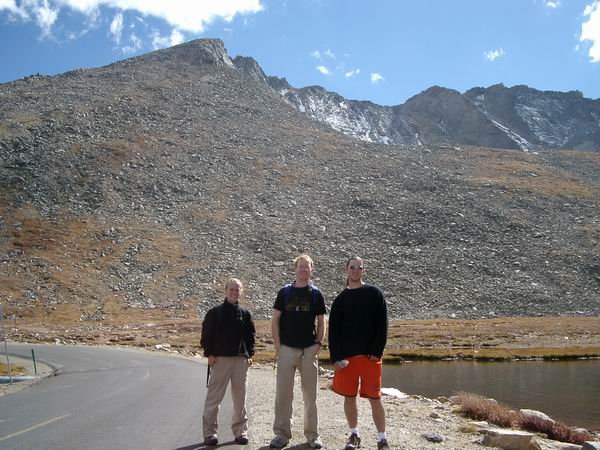 Erin, Aaron, and Mike with Mount Evans in the background.