After reviewing accessibility, rating difficulty, watching the weather, and gathering some information on local forums, I decided to attempt Pikes Peak via the Crags Campground Trailhead.  I was successful in hiking the mountain as the weather was clear and the trail was empty.  I was up and 5:00 and left my house at 5:30.  After going through Colorado Springs, Colorado, and Woodland Park, Colorado, I was at the trailhead by 7:15.  The road was plowed all the way through Crags Campground to the actual trailhead.  In reading the guidebook and reading trip reports, I was a bit concerned about route finding as hikers seemed to indicate that it was somewhat difficult.  To mitigate any problems, I loaded up my GPS with waypoints and photo copied route descriptions.

The trail was well packed and snowshoes were not required.  I hiked a short way up the trail and off to my left were the three pipes described in several trip reports.  A few hundred feet later was the creek crossing off to the right.  From here, the trail continued to appear heavily used as I made my way up the southern drainage.  The trail crossed to the north side of the creek at 10,900' below a towering block of rock to the north.  I continued east and upon my return, learned that I left the trail to the right earlier than I would have needed to.  Instead of switch backing up and staying on the north side of the basin, I simply followed the bottom of the drainage all the way to the timberline at 11,800'.

From timberline to the saddle at 12,730' is where I ran into my first of two difficult sections of the day.  Not only is the distance from the top of the trees to the saddle deceiving and much longer than it initially appears, a light dusting of snow filled the rocks which made progress slow.  I began to post-hole a lot and had to work much harder.  My feet were also getting cold and the sun had still not risen over the horizon.  I stopped for some water and a snack, loosened the laces on my boots to increase circulation, and then finally reached the 12,730' saddle shortly after seeing the sun for the first time of the day.  I got my first glimpse of Pikes Peak and felt rejuvenated.  I hiked on the abandoned spur road and was at the Devil's Playground in shortly afterwards.  From the 12,730' saddle to the 12,930' saddle to the base of Pikes Peak was easy going as I followed the route description to the right of Points 13190 and 13250 and to the left of Point 13363.

At 13,400', the summit was only a half a mile and approximately 700' away.  The dusting of snow discussed earlier would return to haunt me as this section of the trip proved to be the second crux of my hike.  With snow filling the talus, climbing Pikes Peak final northwest slope was challenging as I post-holed some more and had trouble maintaining my footing.  I was also becoming fatigued.  Trying to rock hop on the exposed talus, I struggled to the top after wiping out a couple of times and slipping on the rocks.  The summit was like a ghost town and I was the only one there.  The summit house was locked and the peak had a surreal feeling.  I ate and hydrated while taking photos of the surrounding mountains.  The Bottomless Pit, Railroad Couloir, and Y Couloir looked intimidating.  Because of the difficulty I had on the northwest slopes coming up, I opted to hike the road back down although this is illegal.

Since Point 13363 is the highest assessable point next to Pikes Peak on this route, I decided to go over it on the way back down.  I also read about Point 13070 being the highpoint for Teller County, so I scurried to the top of it too when I got back to the Devil's Playground.  On the way back out, I picked up a snowshoe trail that led me to the north side of the basin to the switchbacks referred to in Roach's route description.  It took me 5:25 to reach the summit, I spent 0:40 on the summit, and it took me 2:45 to get back down.  I may have done slightly better on the way up, but I had a couple of episodes of low blood sugar that slowed my progress some. 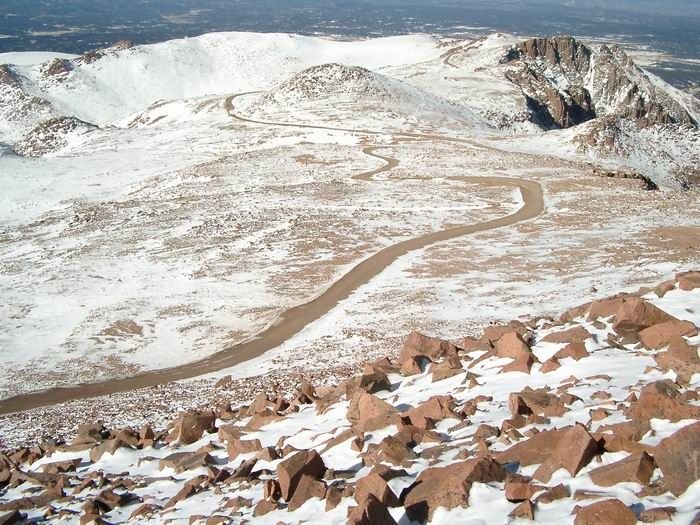 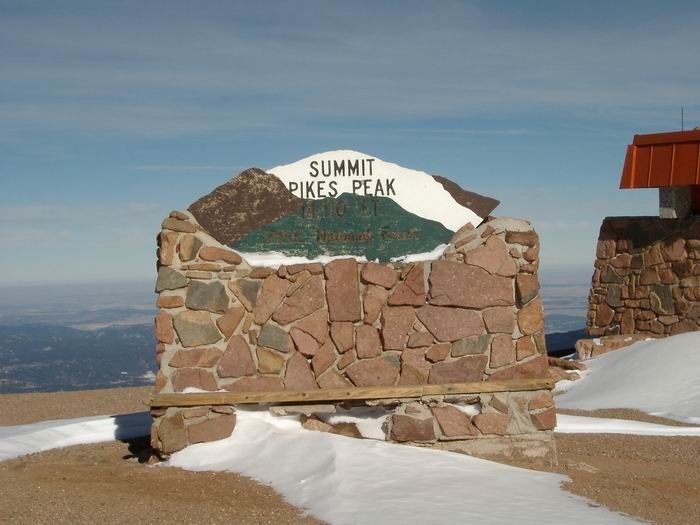 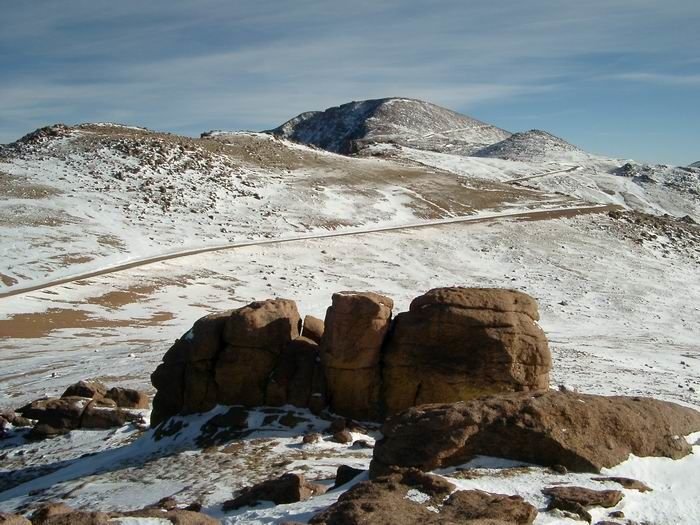