Mount of the Holy Cross (1)

Since I was working in western Colorado for the week, I thought it would be a good idea to try and climb Mount of the Holy Cross on the way back home.  Mid-June to mid-July is the best time of the year to attempt the Cross Couloir, so this became the plan.  The Cross Couloir is a steep snow climb with the angle exceeding 45 degrees near the top.  I would agree with this statement and consider this the most difficult and dangerous snow climb I have done.  After having mixed feelings about backpacking for Challenger Point and Kit Carson Peak, I decided to day hike Mount of the Holy Cross and compare the two trips.  Unfortunately, the circumstances in terms of timing were different for the two trips, and I think I made the wrong call on both of them now.  The extremely late backpacking start on Kit Carson Peak and Challenger Point seemed to make that climb more challenging.  My arrival at the Halfmoon Trailhead near Mount of the Holy Cross was much earlier and backpacking in during the late afternoon would have likely been a wise choice for the Cross Couloir.

I got nearly six hours of sleep before waking at 2:20 for Mount of the Holy Cross.  I knew an alpine start was needed in order to reach the couloir before it had received too much morning sun.  I was hiking by 2:45 and reached East Cross Creek in 1 hour and 45 minutes.  Things slowed down considerably here as I fumbled around trying to locate the climbers trail heading to Lake Patricia and the Bowl of Tears Lake.  I wasted 45 minutes to an hour trying to find some sign of the trail before realizing my efforts were futile in the dark with only a headlamp.  At this point, I knew the lost time may hurt my chances of quality snow conditions, so I simply started bushwhacking in the direction of Lake Patricia.  The initial hiking was difficult and slow, but once I reached the large boulder fields after climbing 300', things eased up and I began to enjoy myself again making adequate progress.  I never did see Lake Patricia as I passed it far to the west, but was happy to realize that after missing the lower lake, I was only 400' and about one half mile from the Bowl of Tears when the first sun started to hit Mount of the Holy Cross.

I passed below the base of the Cross Couloir and proceeded to the frozen Bowl of Tears Lake.  I put on lip balm and sunscreen, stripped down to shorts and a t-shirt, and started up the west slopes above the Bowl of Tears Lake to the entrance of the Cross Couloir.  By circling around the base of the couloir and gaining 800' on its south side, you avoid the nasty cliffs that reside at the bottom of the couloir.  I located the entrance of Cross Couloir and tested the snow conditions that appeared fine to begin with.  I entered the Cross Couloir at 8:20 and 12,800' feeling relatively confident with only 1,200' to go.  The steepness of the cliffs below were unnerving to begin with, but my initial progress and the task that lay ahead shifted my focus as I concentrated on gaining elevation in the now stronger sun.  It didn't take me long to realize that the hour I lost at the creek made a significant difference in the quality of the snow conditions.  The snow was softer than I would have preferred, but I had committed to the couloir and down-climbing was not an option on the steep grade.

The shaft of my axe would enter the snow all the way to the pick and adze on almost every plant at which point I would take two or three front point steps kicking deeply into the snow.  I couldn't use a low-dagger or high-dagger technique with my axe because the snow was too soft for the pick to make any sort of descent hold.  I continued to the cross ledge where I was able to climb onto some rocks and remove my pack for a short period of time.  My confidence remained moderate at best as I was extremely fatigued at this point and still had 400' to go.  My upper body was tired from planting my axe and holding my other arm above my head the whole time.  In addition, by having to often kick two or three times to get a solid placement, every step was more like two or three.

I didn't feel as though the couloir became much more steep after the ledge; however, I thought the entire couloir was pretty steep so a few more degrees apparently didn't make a huge impact on me.  I gained another 100' and than had to begin counting steps.  I had slowed significantly and was stopping far too often.  Counting steps helped a lot and the last few hundred feet went by fast.  I took 30 steps and then rested, 30 more and then rested, etc. etc. etc.  I finally saw the grade ease up and thankfully popped out on the ridge only 30 yards from the summit.  I sprang onto the ridge where I saw Rob Judd on top and asked if I had made it.  I startled him and he responded that I had made it.  It was 9:50.  I would have likely stayed on the top longer, but wanted some company on the descent, so I removed my crampons, had a quick bite to eat, took a few photos, and started down with him.  He had completed the Halo Ridge route and was ready to head back.  The hike down was uneventful, but time went by fast as we picked our way down the north ridge and discussed mountains.  Rob pulled away from me on the hike back up to Halfmoon Pass and I arrived back at the trailhead at 1:40 completely exhausted.  My total trail time was 11 hours. 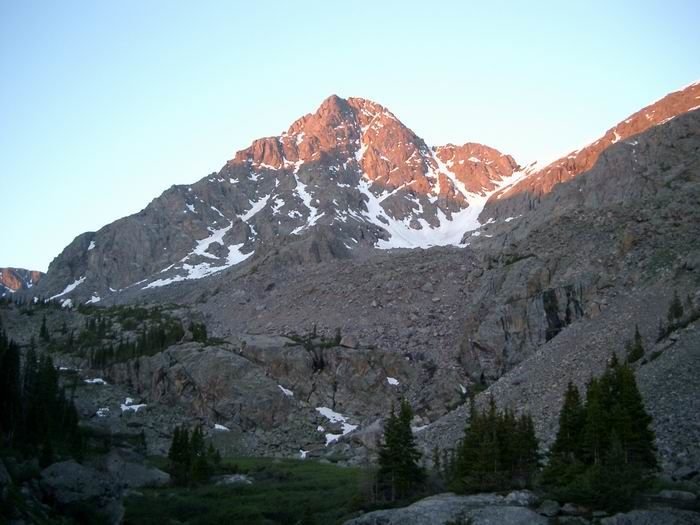 Mount of the Holy Cross and the Angelica Couloir 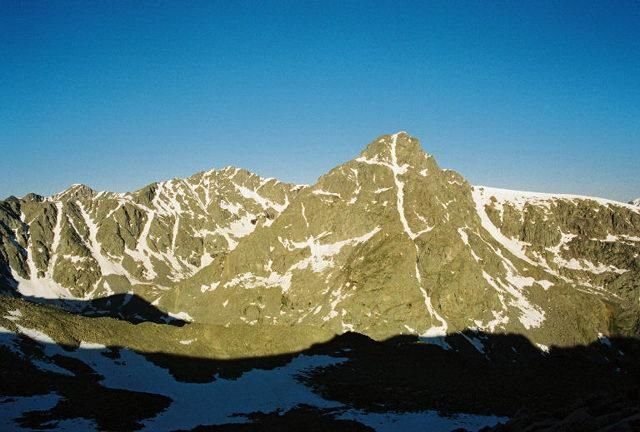 Mount of the Holy Cross and the Cross Couloir 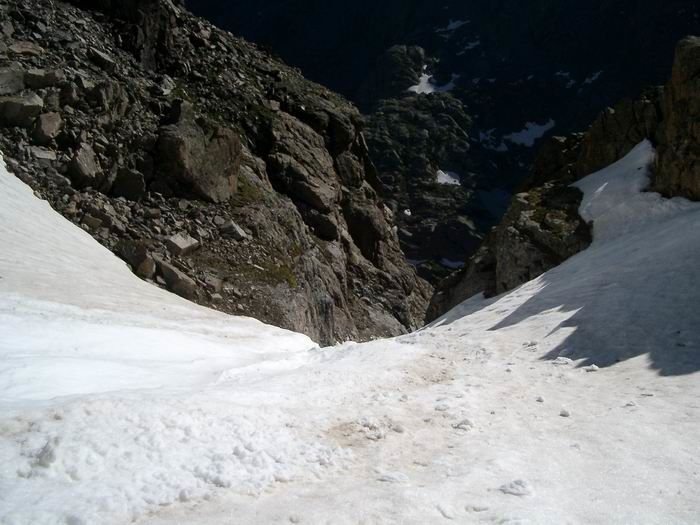 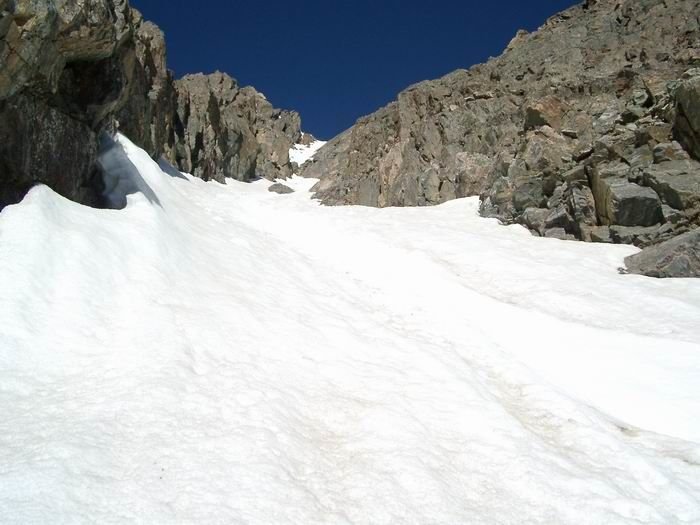 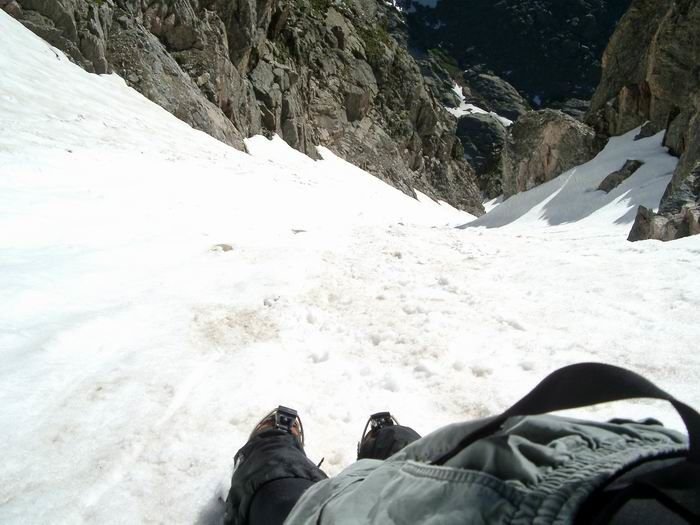 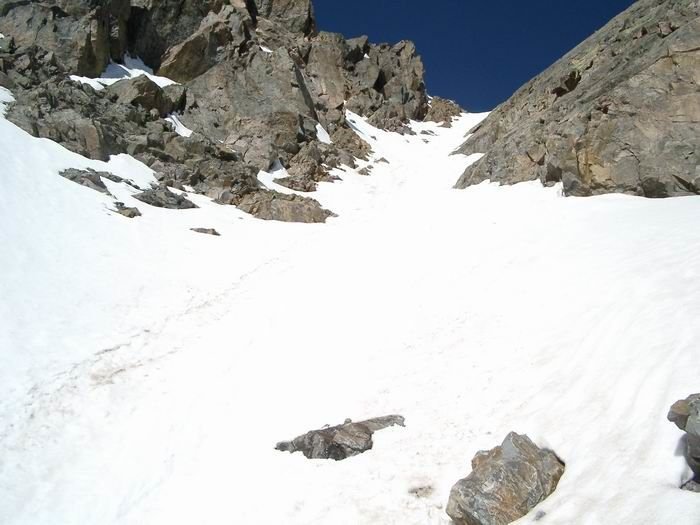 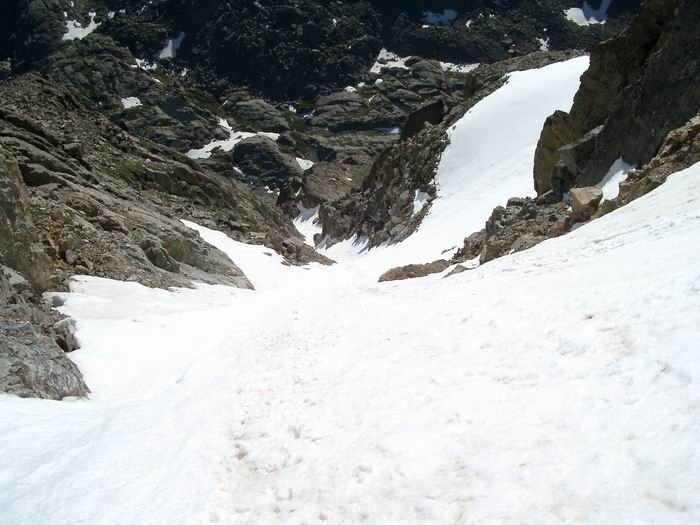 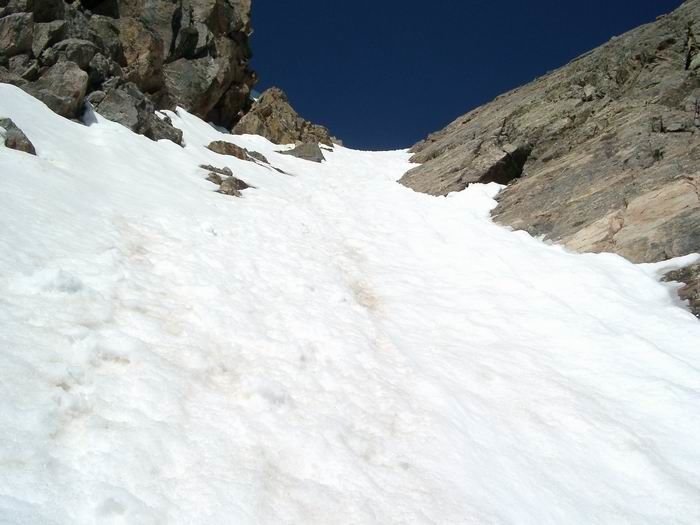 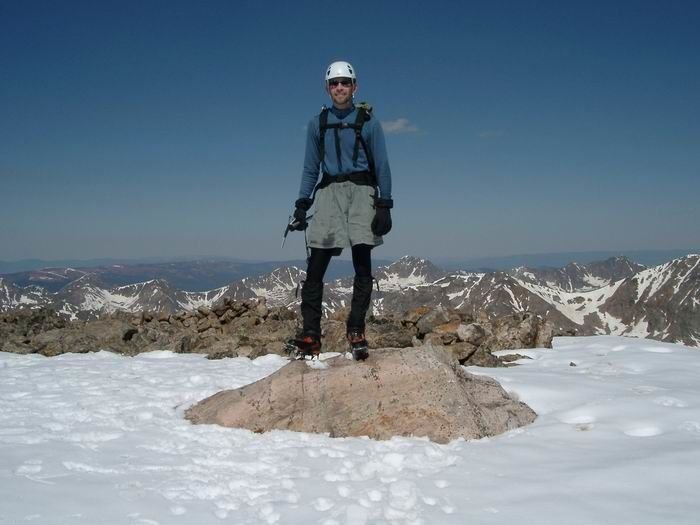 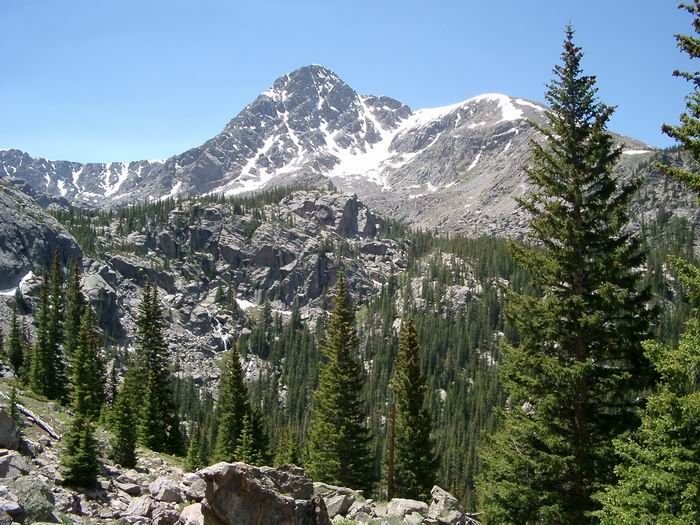 Mount of the Holy Cross