An unexpected out-of-state trip foiled my plans to attempt the Crestones with some co-workers of mine last weekend.  I wanted to get out again, but because of the questionable forecast for the weekend, I didn’t want to waste a drive up the South Colony Lakes road without better odds of reaching Crestone Peak and Crestone Needle.  Instead I opted for Mount Lindsey.  Mount Lindsey sits near the southern end of the Sangre de Cristo Range mountain range in south central Colorado. To my surprise, this peak turned out to be more than I anticipated.  Based solely on the guidebook statistics, I wasn’t expecting too much in terms of difficulty, but the route, trail profile, and weather made this trip an enjoyable challenge that was rewarding.

After checking the forecast for one last time on Saturday afternoon, Brandon and I decided to head down to Red Wing, Colorado, and make the most of the weekend.  Although Colorado has been receiving a lot of precipitation as of late, it appeared as though there was a window of opportunity on Sunday morning that might allow us to climb Mount Lindsey.  As we approached the Huerfano Trailhead our optimism faded.  It rained heavily much of the way from Walsenburg, Colorado, to Gardner, Colorado, and at 10,000’ there was a fresh dusting of snow in the trees and high on the surrounding mountains.  Nevertheless, we organized our packs and went to bed hoping that the weatherman was right about the break in the rain.

The alarm sounded at 4:00 and it was easy to get up after our less than satisfactory sleep.  The sky was full of stars and the hike was on.  We grabbed a small bite to eat, turned on our headlamps, and started up the Lily Lake Trail.  As previously mentioned, the statistics of the hike and the trail profile are deceiving.  You only gain approximately 100’ in the first 1.3 miles which leaves 3,300’ for the final 2.6 miles to the top of Mount Lindsey.  After reaching the junction for Lily Lake, it is a short distance before you cross the Huerfano River.  We hiked along the east side of the river for a while before leaving the valley floor and starting our ascent up the north side of an unnamed creek.  Even though we lost some time due to route finding near the river crossing in the dark, I was impressed by the quality of the climber’s trail and feel as though with daylight, this area would be easy to navigate.

We started gaining elevation and got into a good rhythm next to the rushing creek.  The sun was starting to rise and the views of the clouds drifting over California Peak and the mountains to the west were amazing.  We made it to the basin below the Sierra Blanca and the Iron Nipple where we took our first extended break at 12,000’.  After refueling and taking a few photos, we started the stroll across the basin to a small rib leading to the 13,160’ saddle between Mount Lindsey and the Iron Nipple.  At the base of the rib, the route became steep again as we gained the saddle and felt the warming sun for the first time of the day.

Although the low clouds to the east were beautiful to observe, the daunting north face couloir and northwest ridge of Mount Lindsey maintained our attention.  We cached our trekking poles and some water while contemplating our ascent route.  It wasn’t the small amount of old snow in the north couloir that concerned us, it was the new dusting that made the rocks icy and slippery which we debated about.  We followed the climber’s trail to the southeast and reached the base of the couloir.  Although the couloir looked passable, I suggested we gain the northwest ridge and try the solid dry rock above us on the class 3 route.  Brandon agreed and we worked our way up a small rib to reach the exposed northwest ridge of Mount Lindsey.

Although I have done a couple of steep class 3 and 4 routes in Colorado, they have all been snow climbs.  This route provided me the opportunity to compare a Colorado class 3 scramble to what I have experienced in the past.  After reaching the summit, it became obvious to me that some of the class 3 ratings on my prior climbs have been liberal.  Mount Lindsey’s northwest ridge was extremely fun, but it certainly tested our skills and tolerance for exposure.  A couple of moves approached class 4 in my opinion.

After gaining the ridge, the guidebooks recommended staying directly on the crest and that is what we did.  The rock was solid and there were two sections I would consider the crux, which provided relatively high exposure with limited holds.  The fact that it was slightly cold and windy may have made these sections more difficult than they actually are.  We worked closely together and provided assistance to one another getting through the harder areas.  The weather was holding after we made the summit and it was an extraordinary day.  We rested in the rock shelter, ate some more, drank some water, and took the traditional summit photos.  After spending 30 minutes on top taking in the views of Blanca Peak, Little Bear Peak, Ellingwood Point, the Spanish Peaks, and the Crestones, we decided it was time to head down.  We noticed another party of two at the saddle when we approached Mount Lindsey’s south summit on the way up, so we were thinking we may be able to gain some beta on the couloir if we passed them on the way down.  Our logic proved correct, and they informed us that the couloir didn't pose any serious threats.  Not wanting to down climb the ridge, we hiked off the northeast side of the mountain and picked our way to the top of the snow filled gully.

We actually ran into another couple just as they were coming out the top of the gully which was perfect timing.  We double checked to ensure there wasn’t anyone else below us and started our descent down the couloir.  Before we knew it, we were back at the saddle picking up our cached gear.  At this point, I asked Brandon how he felt to see if he was interested in hiking to the Iron Nipple and/or Huerfano Peak.  Although fatigued, we decided to climb Iron Nipple since it was so close and then see how we felt once on top.  The 340’ to the Iron Nipple was draining.  I wish we could say weather chased us out of the mountains or we had an obligation to return to, but we were simply tired and decided to pass on Huerfano Peak.  Once back in the basin, we took another extended break, stripped down to our shorts, and prepared for the hike out.  We made good time back to the Trooper where we celebrated with a couple of cold beers.  Our total trail time was eight hours. 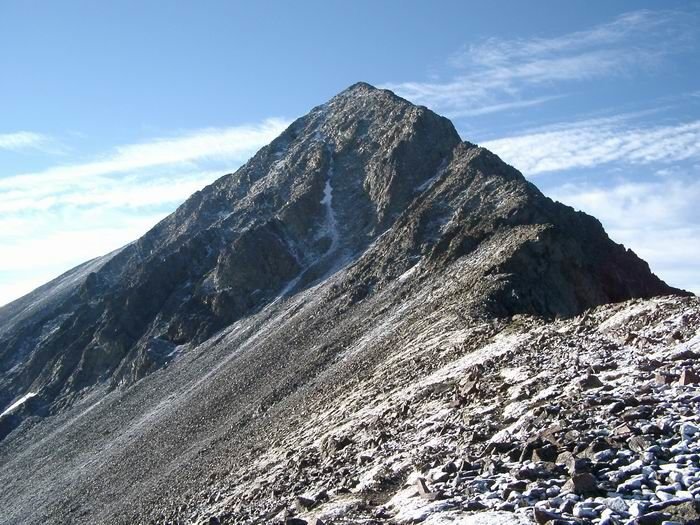 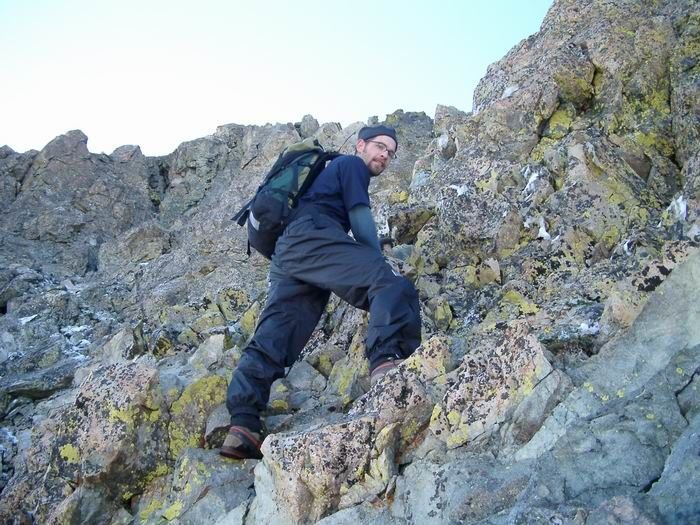 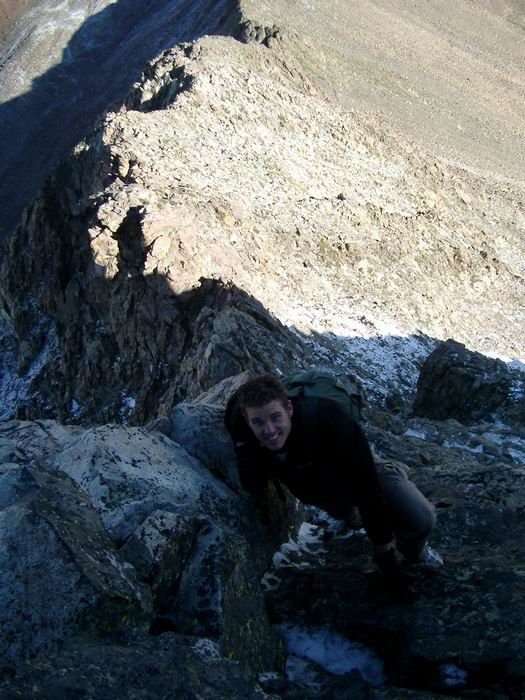 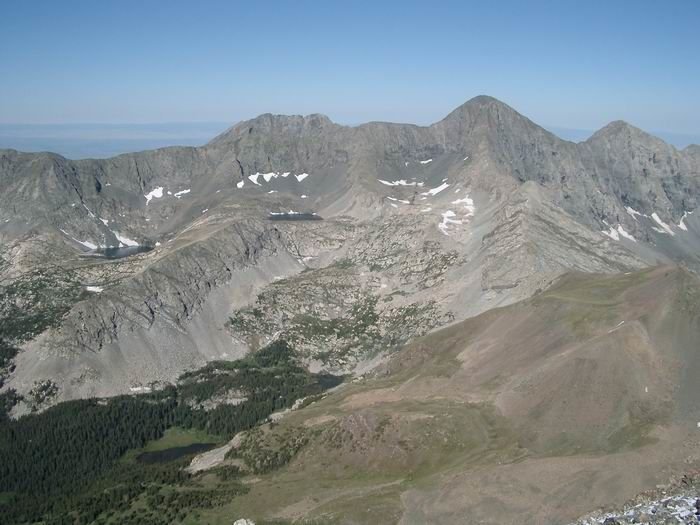 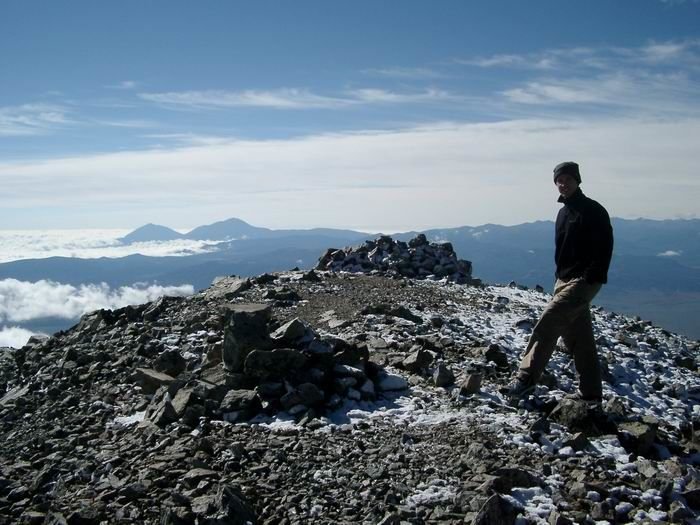 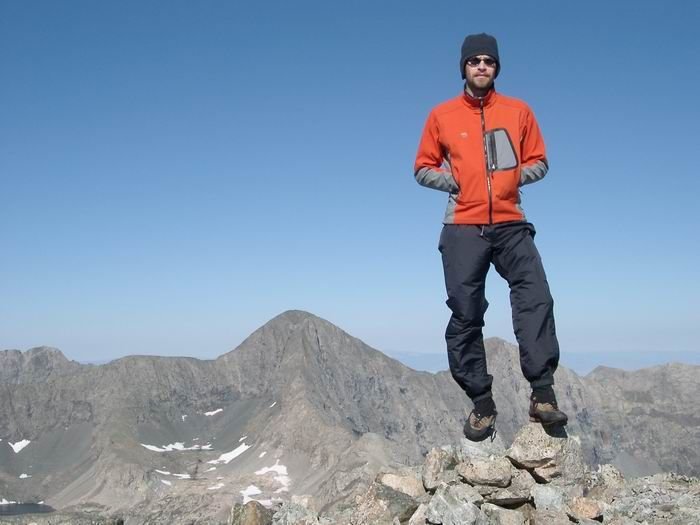 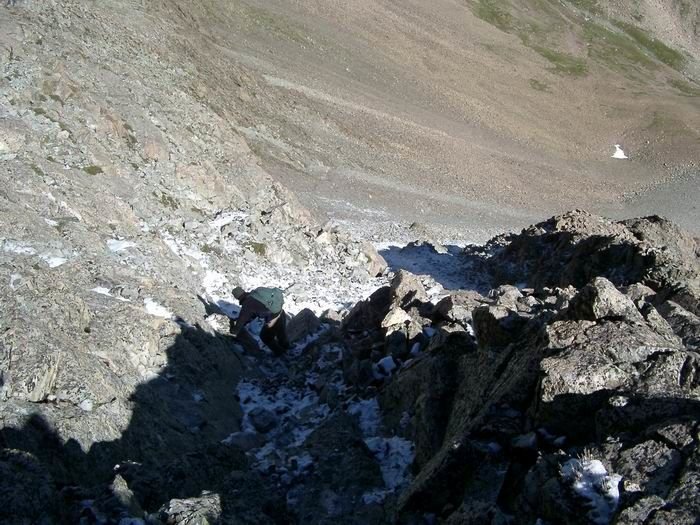 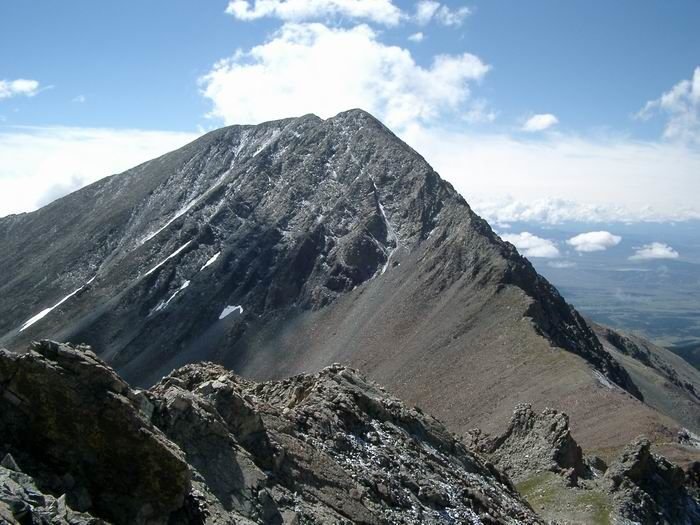 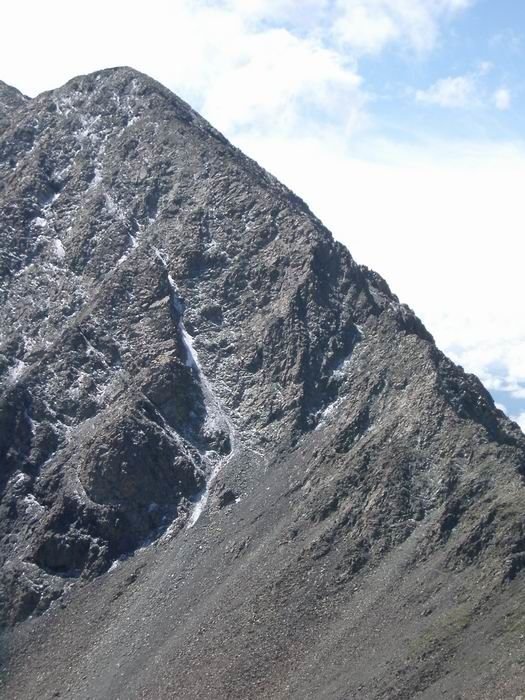