This particular hike could just have easily been named Mount Belford Attempt.  November is the only month in which I haven't hiked a 14er, and this weekend was going to be my last chance in attempting one this year.  I drove over to the Sawatch Range to give Mount Belford a shot.  Last year Mount Bierstadt eluded me due to high winds, cold temperatures, snowfall, and low visibility.  Mount Belford did the same thing to me this November.  After seeing the questionable forecast, I could have played it safe and hit 12er or 13er in the Front Range just to add a peak to my list.  However, I knew if I did that the weather would have been perfect for my original plans, so I stuck with Mount Belford and took the risk of not making a summit and just going on a hike.

The drive to Leadville, Colorado, was difficult.  There was ice on the interstate near Eisenhower Tunnel, and the road over Fremont Pass was less than ideal.  Nevertheless, when I pulled off the highway onto Chaffee County Road 390, there was less than an inch of new snow on the ground and I could see some of the surrounding peaks.  I knew the temperature was going to be cold, so I added an extra base layer before leaving and packed an extra fleece in addition to my normal winter hiking apparel.  I had no idea what to expect, so I threw my ice axe and crampons in my backpack as well.

I left Denver at 4:00 and was hiking by 6:40.  The trail appeared well used and I decided to strap my snowshoes on my pack and try and go without to begin the day.  This worked well other than the fact that I now had a few extra pounds on my back.  I warmed up quickly and was having a pleasant hike in the comfort of the trees in Missouri Gulch.  This is a moderately strenuous trail gaining 4,500' in 3.5 miles so the grade is relatively steep and constant from the beginning.  I followed the snowshoe trail up the switchbacks and was pleasantly surprised to determine that I had gained 1,200' in my first hour.  The snowshoes stayed off although I continued to carry them not knowing exactly what to expect going forward.

I reached the remnants of an old cabin and continued to just below tree line where I took another break.  I could see that the northwest shoulder of Mount Belford could be climbed without snowshoes, so I cached them along with a quart of water and my crampons.  Needless to say, this lightened my load quite a bit and my pack felt much lighter.  Upon leaving the shelter of the last few trees, it seemed as though I had landed on another planet.  The wind picked up considerably and the spindrift was blowing all over.

I decided to press on with my hopes of a November 14er quickly fading.  I at least wanted to gain the shoulder of the peak to make the hike and drive worthwhile.  Visibility across the gulch was quickly diminishing and the snow seemed to be falling more heavily now.  It was at this point when I saw a herd of approximately 40 elk on the west slopes of Peck's Peak.  Although Mount Belford was in sight, there was still much work to do after initially seeing the summit.  I began climbing the shoulder and was able to follow the trail for the most part.  Unfortunately, I quickly became miserable and wasn't having much fun.  My goggles iced over, my feet were numb, and as soon as I removed a glove to make adjustments my hand froze.  I actually felt pretty good physically, but needed to make a decision because of the weather.  I dropped my pack and pulled out my GPS to see what elevation I was at.  I had gained 1,600' from my first break for a total of about 2,800'.  This left me with 1,750' to make the summit which I knew would take me at least two hours in the current conditions.

In the five minutes it took me to check my status, I grew even more cold and my clothes and pack were frosting over.  I didn't think I had it in me so I submitted to mother nature.  Once back at my stored gear, I managed to crunch away on a rock hard rice crispy bar and eat a solid stick of beef jerky.  The water I left behind had a half inch of ice in it.  I loaded my gear and made my way back to the trailhead.  After reentering the trees, the hike out was enjoyable and I was glad I made the trip despite not reaching the summit. 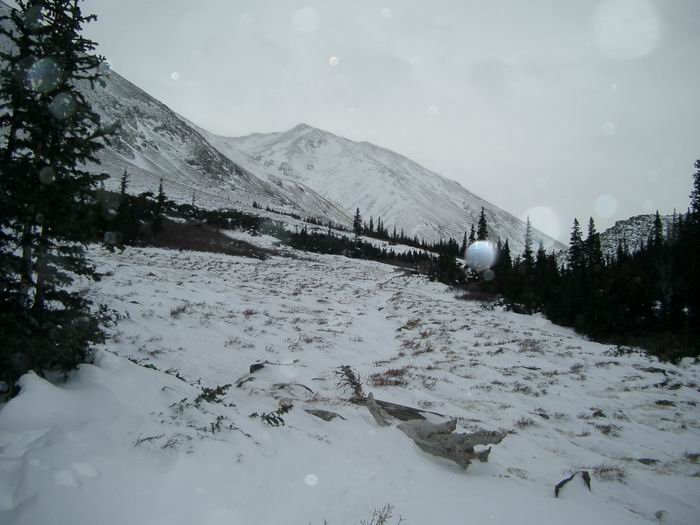 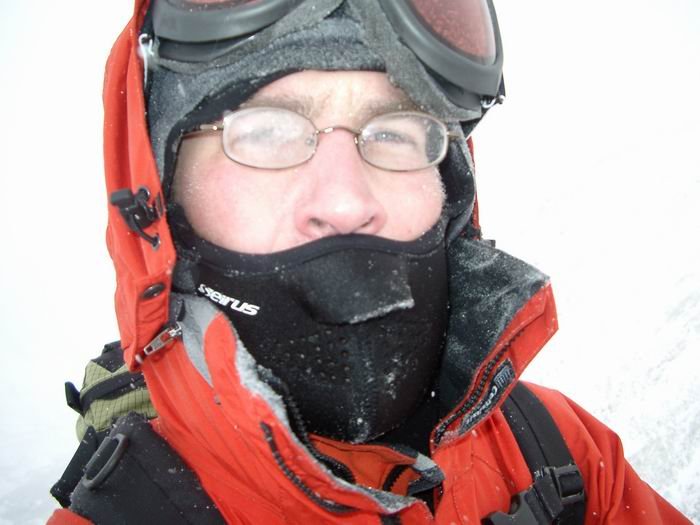 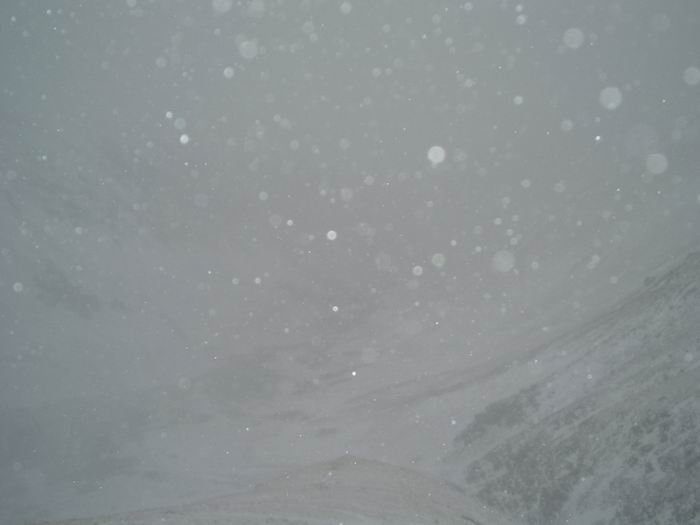 Looking north down into Missouri Gulch. 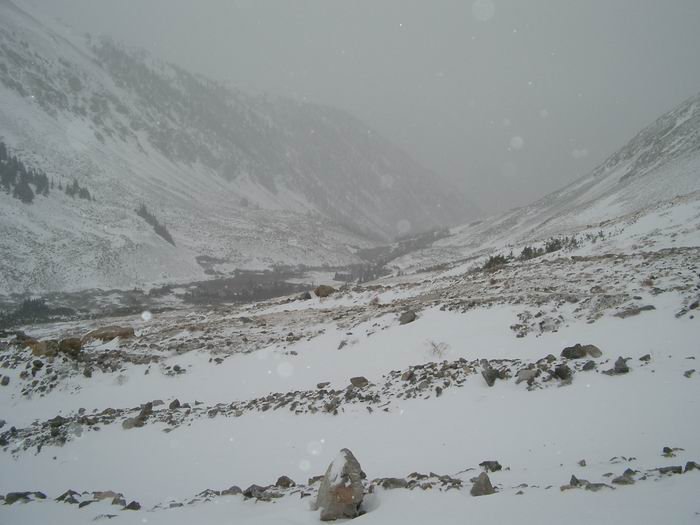 Slightly better weather on the descent.