After hearing of the recent success climbers were having on Little Bear Peak in the south Sangre De Cristo Range, I pulled together a last minute trip to climb it myself.  Little Bear Peak is considered one of the more difficult 14ers in Colorado with the easiest west ridge route rated class 4.  I would consider this a grade II climb with steep snow.  In addition, it is also revered as one of the most dangerous 14ers because of the excessive rock fall that occurs near the Hourglass Couloir.  Many climbing accidents and several deaths have occurred on this mountain.  In order to mitigate this danger, I decided to attempt a spring snow climb on the peak similar to the one I did on the Lost River Peak.  The route is more safe with all the loose rock under snow.

I left Highlands Ranch, Colorado, at 4:00 on Wednesday afternoon to pick up Mark in Colorado Springs, Colorado.  After a quick meal at McDonalds, we were on the road at 6:00 and parked at our trailhead by 9:00.  The official trailhead for this approach is at 8,000', one of Colorado's lowest for 14ers.  Although all passenger vehicles must utilize this low trailhead, the initial section of the trail is actually well known for being one of Colorado's toughest four wheel drive roads.  In an effort to cut some distance and elevation off of the hike, we decided to see how my Trooper would perform on this road.  I was pleasantly surprised, and we actually made it exactly three additional miles up the road to 9,850' cutting six miles round trip off the hike and approximately 1,850' of vertical gain.  We went to bed at 10:00.

We awoke at 4:00 and were hiking in the dark at 4:30.  It became light sooner than expected and we could have started at least a half an hour earlier.  On the approach, I became very pessimistic about our climb because of the warm overnight temperatures and soft snow we encountered on the hike in.  After caching some water and gear at Lake Como, we made our way over to the north facing gully that leads to the notch at 12,580' on Little Bear Peak's west ridge.  Things began to look better as the snow was considerably harder above the trees around 11,900'.  We put on our crampons and helmets, pulled out our ice axes, and began up the gully.  The snow remained stable, and although relatively steep, the gully posed no significant problems.  Approximately half way up, we looked back to see another climbing coming up on us fast.  We gained the ridge at the notch, removed our crampons, and continued east on the west ridge assuming the other climber would catch us on the traverse to the base of the Hourglass Couloir.  We stayed directly on top of the ridge to Point 12,980' where we could finally see the crux of the climb.  Descending slightly, we made our way over to several snow fields that we had to cross on the south side of the ridge.  This snow was sun-cupped enough to provide adequate footing, so we didn't put our crampons back on until we were directly below the Hourglass.

Jim finally caught up to us at this point and we decided to all climb together just in case there was any rock fall hazard above.  As mentioned in Roach's Colorado's 14ers, the initial climb of the Hourglass is class 3 and then increases to class 4 as you near the narrow section of the route.  Despite being the steepest snow I have ever been on, I felt comfortable as the crampons bit in well and no rock fall was evident.  We passed a sling rappel anchor and continued to the steepest and slightly icy portion of the climb.  The gully opened up and we were now only a couple of hundred feet below the summit.  We all wanted to avoid any rock climbing, so we angled to the left and continued towards Little Bear Peak on snow that remained steep all the way to the summit.

There were only two short 20' to 30' foot sections where we were required to do some mixed climbing.  After a few more minutes, we popped out directly on the summit with only a slight breeze to chill us.  Jim and I climbed most of the day with simply a base layer or light wind shirt on while Mark kept his soft shell on for much of the day.  We were the only three individuals on the mountain, and after taking a few photos and congratulating each other, we started back down.  We wanted to get back to the notch and Lake Como before the snow had time to soften.  Generally speaking, the descent was uneventful.  We down-climbed face in using our front points for approximately 100' of the steepest and icy section of the Hourglass Couloir.  After crossing the snow fields, we removed our crampons and began our slog back across the west ridge to the notch.  Conversation dwindled and fatigue settled in.  Once on top the notch, we tested the snow and decided to plunge step and glissade back to the lake.  We rested at the lake, ate, drank, packed up, and headed out after becoming slightly rejuvenated.  Upon reaching the Trooper, we celebrated with a Milwaukee's Best and headed home.

Other than ripping a hole in my shell pants and slicing my hand open with my ice axe as I threw my pack into the back of my vehicle, it was a great day of climbing.  I would recommend this type of climb on Little Bear Peak to anyone apprehensive about climbing it because of the horror stories circulating around the rock fall danger.  It is still a difficult peak to climb, but alleviating some of the risk can help a lot.  My total trail time was nine hours. 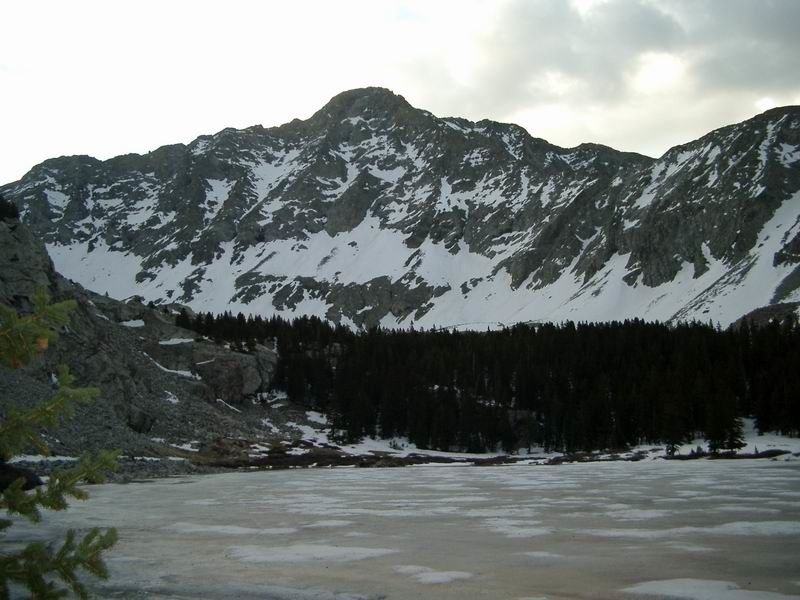 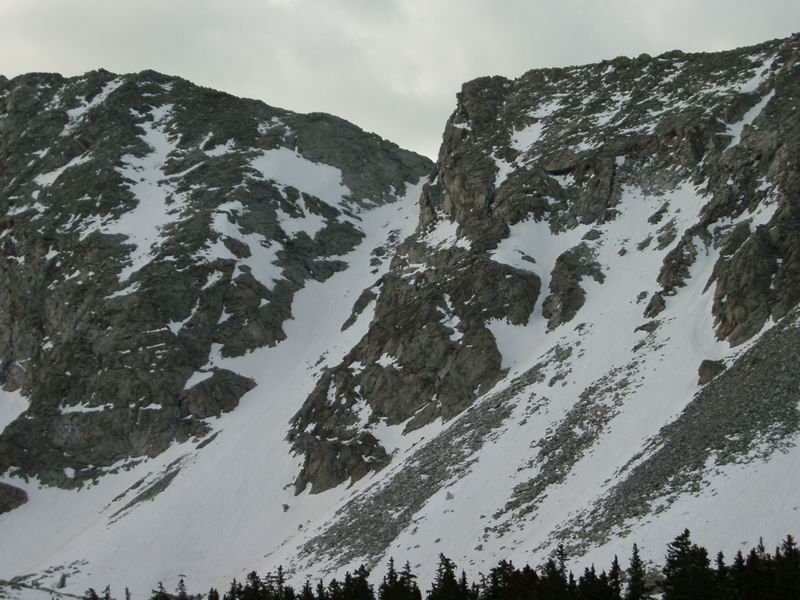 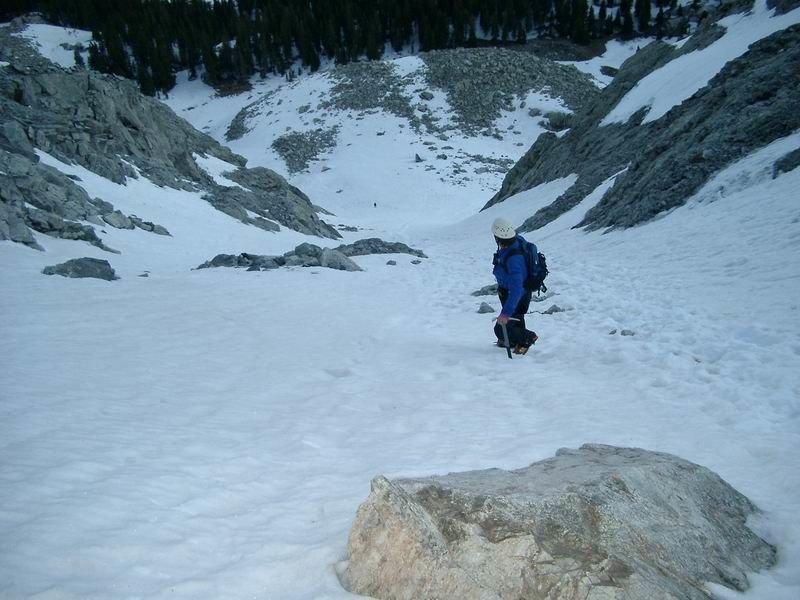 Jim climbing the gully to the west ridge. 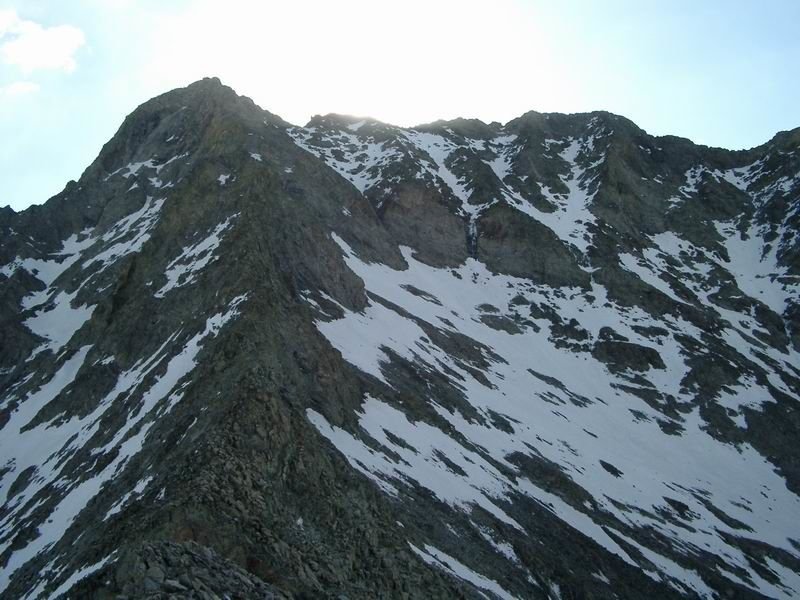 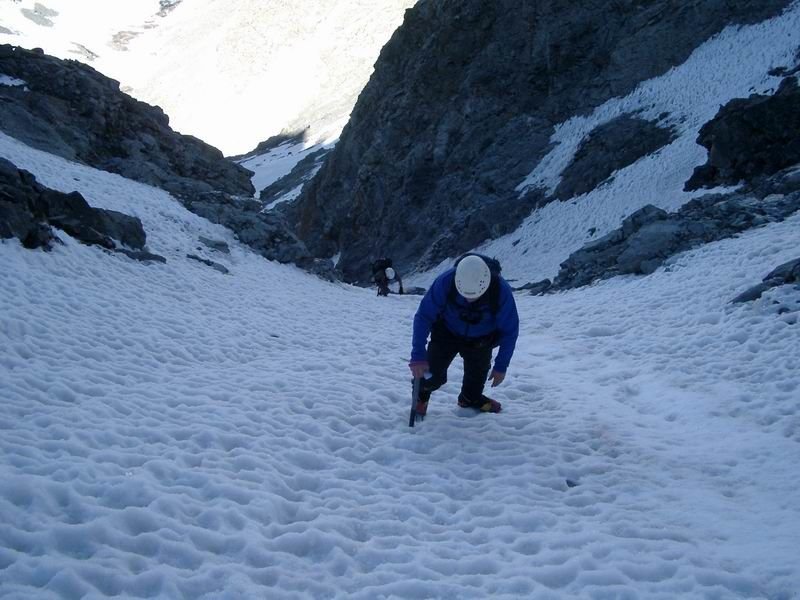 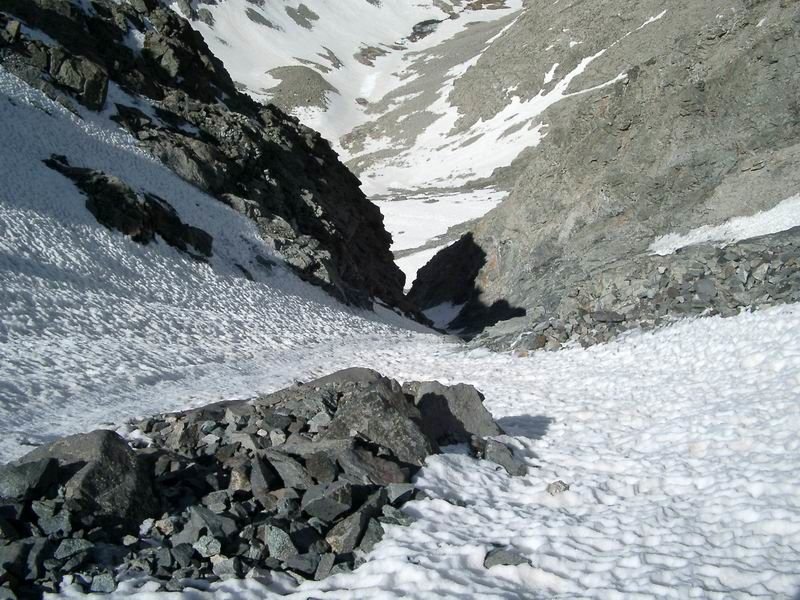 Nearing the top of the Hourglass Couloir. 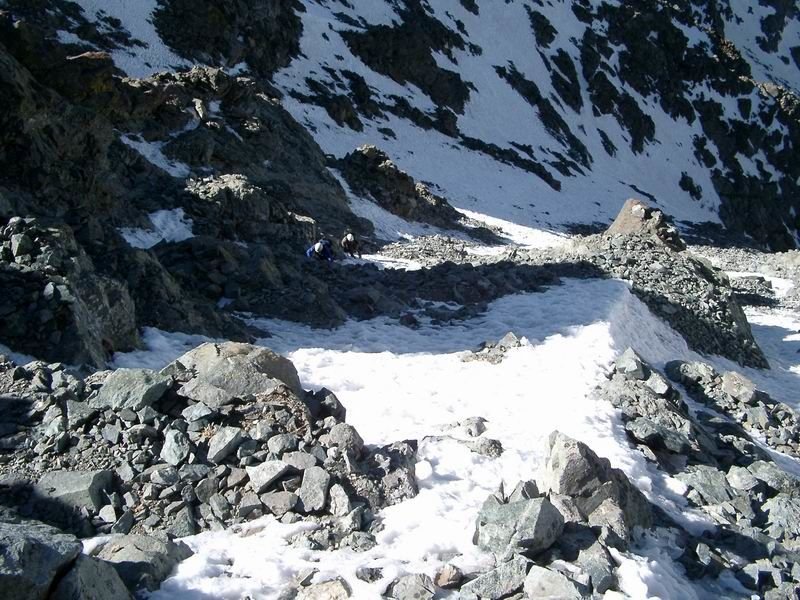 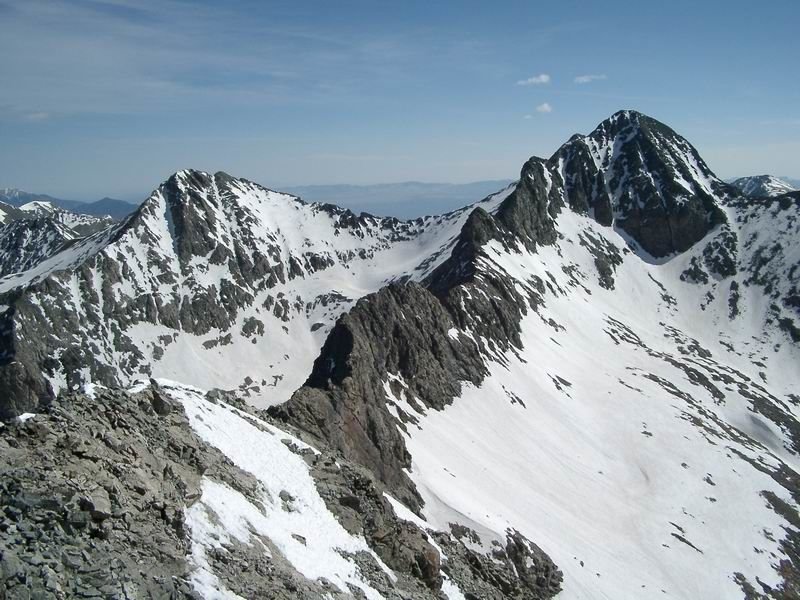 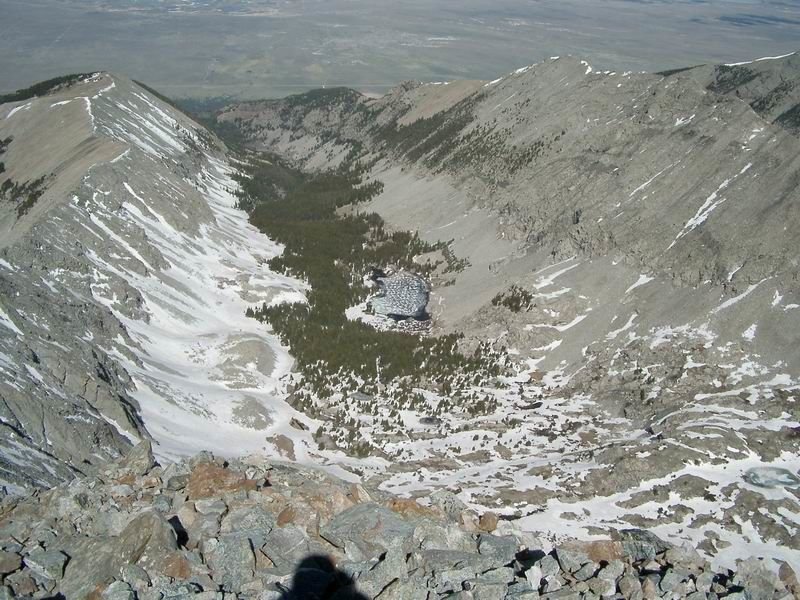 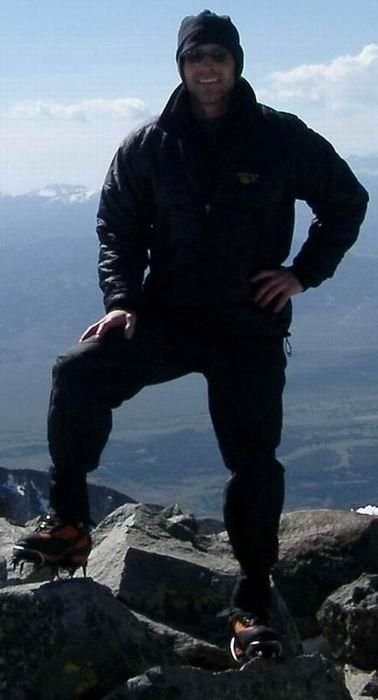 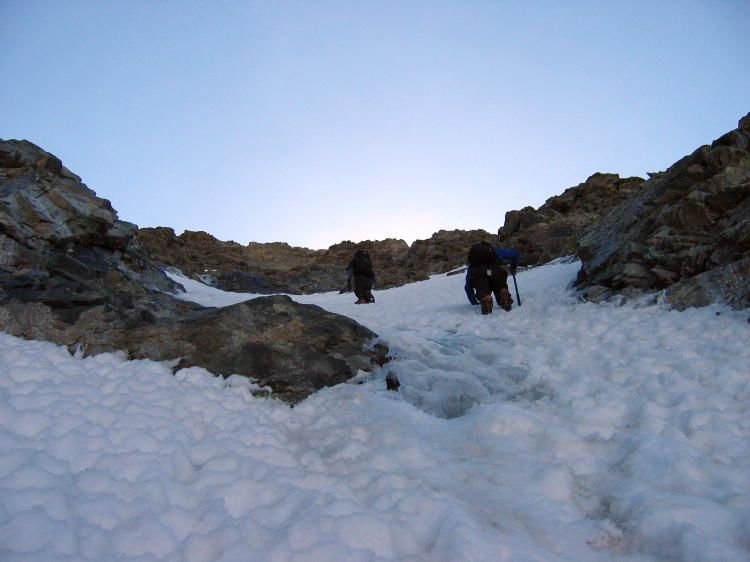 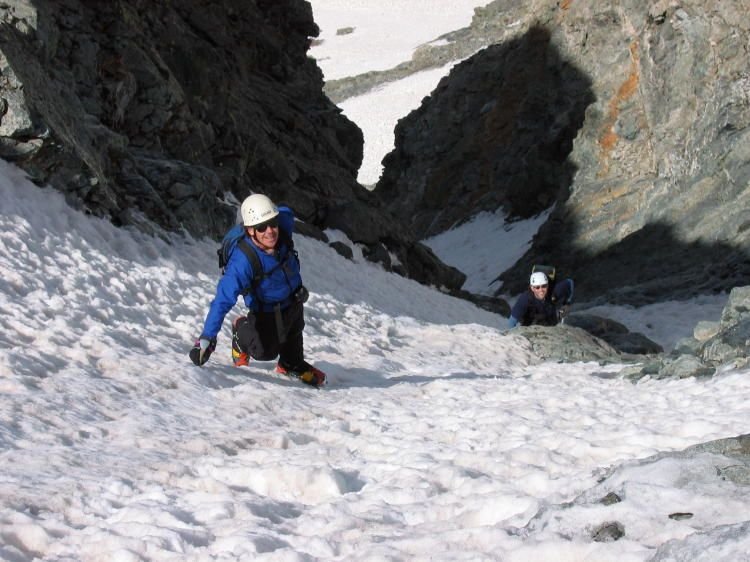