I seem to have a way of turning a few of the easier 14ers into difficult hikes.  I have done this with Torreys Peak, Mount Yale, and Mount Elbert.   Humboldt Peak is no exception.  I was contacted by Jim via email to attempt something in the Sangre De Cristo Range.  We decided to try the 14ers in the Crestone region and play it by ear.  I was disheartened by the forecast all weekend, but we stuck with our plans and met at the lower trailhead of South Colony Lakes late Sunday night.

Jim drove from Norman, Oklahoma, so because of his already long day and the currently questionable weather, we camped at the lower trailhead for the night.  We were awoken around 1:00 by search and rescue personnel looking for an individual who had been missing in the area since 3:00 the previous afternoon.  After they determined we weren't who they were looking for, three vehicles proceeded up the road and we fell asleep for a couple more hours.

The wind blew hard all night as it also rained much of the time.  Jim woke me shortly after 4:00 and we began the laborious drive up South Colony Lake Road.  My pessimistic attitude didn't show through, although I felt as though we were making the drive for no reason.  The difficult South Colony Lake Road lived up to its reputation.  Because of the area's popularity, I wish they would bulldoze it once a year.  Nevertheless, through the darkness of the morning, we worked our way up the wet road with my speedometer never registering an actual speed.

Of the numerous sections of this road, I would say there were at least four areas I could have classified as the fairly difficult.  Going up in the dark may have assisted because it forced us to focus on the 50 feet in front of us rather than seeing farther ahead and becoming demoralized.  I have to say that I was extremely impressed with my Isuzu Trooper's performance.  In four-wheel-drive low, we crawled up the 5.2 miles and finally made it to the upper trailhead after 1 hour and 50 minutes of driving.  Although making it to the upper trailhead was a small victory, it would later have to take a backseat to our summit climb.

With extremely overcast skies and strong winds, we started towards the South Colony Lakes.  Holding in my skepticism, we enjoyed our hike to the lakes while getting acquainted.  Once at the lakes, the wind swirled around us as though it was unsure what direction it wanted to go.  We stopped for our first break when I finally admitted to Jim that I felt it was futile to continue.  I refused to attempt the Crestones in this weather, but knew that Humboldt Peak was class 2.  He asked a few more details about the route conditions, and I explained that I thought there was trail almost the entire way to the summit.  He suggested we hike a bit farther and I reluctantly agreed.

From the lakes, we couldn't even see the bottom of Crestone Needle's east face.  It remained overcast with the winds now stronger as we started up to the pass between Humboldt Peak and Point 13799.  We took one intentional break approximately half way up where we found shelter in some rock outcroppings.  Other than this, we stopped only when the wind became so strong that we had to brace ourselves.  Before too long, we found ourselves above the switchbacks sitting on the saddle at 12,800'.  The lakes below were only briefly visible in small windows of the swirling clouds.

As a pilot, Jim was entertained by the fluid motion of the clouds over the ridge in front of us.  We assessed each other's condition and decided to proceed up the mountain.  The one positive thing that we had going for us was that the clouds we had ascended into did not appear to contain significant moisture.  Once again, the wind was stronger.  On a number of occasions, you could hear the gusts screaming up the side of the mountain like a jet engine.  Whenever this occurred, we warned each other to take hold and brace for the upcoming blast.

We proceeded up the ridge in bits and pieces finding cover in the rock as we went along.  At 13,100', only 300' from the saddle, we had our first real conversation about calling it a day.  Progress was slow, the winds were not relenting, and our breaks were becoming too frequent.  I knew that we still had over an hour of climbing left and wasn't sure if we could sustain the weather for that long.  In addition, I personally questioned Jim's clothing although I didn't tell him that.  (Check out his summit photo.)  He insisted that he was fine.  Since we were both comfortable temperature wise, we concluded that as long as we could follow the cairns back down, we could proceed.

I took the lead for route-finding and forced a stronger pace.  We always keep each other in sight.  During the lulls, we moved rapidly to the next area of protection.  Occasionally, there was a short break in the clouds that allowed us to see the remaining ridge.  I warned Jim that I was certain there was a false summit so don't get your hopes up too high.  Around 13,900', the winds were becoming unbearable.  We hid behind a cairn when I told Jim I thought I had a shot at the summit trying to get a feel for his condition.  He told me to go for it and he would continue as far as he felt comfortable.

I'm not sure if this was the right decision, but I dropped my pack and left for the summit.  The wind practically carried me up a short section of class 3 climbing for 100', and I reached what I thought was the high point.  Jim later concurred that the wind assisted in the hiking for the last couple of hundred feet.  I crawled around on my hands and knees for five minutes desperately trying to find the summit register to confirm the ascent and keep from being blown off the north face of the mountain.  As I looked to the east, I caught a glimpse of another cairn which instantly crushed my summit elation.  In the mean time, I could see Jim approaching from the west.

The wind was slightly less strong below the ridge, so I stepped off the crest and waved Jim on.  It appeared as though he was as determined to reach the summit as I was.  The ridge traverse from the false summit to the actual summit was a test in not getting blown forward onto your face.  I finally saw the rock shelter after only a few minutes and dove in to take cover.  I raised my hand over the top to announce our arrival to Jim.  He joined me shortly, and we laid behind the rock wall only long enough for a quick congratulation and a couple summit shots.  There was a lot of work left and we wanted to get off of the mountain.

I warned Jim to cover the left side of his face as we descended so it didn't get too cold, and with that, we left the comfort and safety of the summit to make our way back down.  Of course, going down is always easier, but we still had to concentrate and make our way from one cairn to the next.  We grabbed our packs and continued to work our way down the ridge.  The wind remained strong, and it wasn't until we were back at the trailhead when Jim told me that on the descent, one of the gusts almost blew him over the edge.

Back at the vehicle, we had a beer, discussed our adventure, took a nap, and then had a warm dinner.  We spent the night at the upper trailhead thinking we might attempt the Crestone Needle on Tuesday, but the weather was worse than the previous morning and we weren't going to attempt the steep ridge in similar circumstances.  The blizzard I drove through on my way home further confirmed our decision to exit the mountains.  I went through Salida, Buena, Vista, and Fairplay, Colorado, since I had the time.

After reading this report, it seems a bit dramatic, but I can honestly say that this was an extremely challenging hike.  Again, with Jim being a pilot, he is familiar with wind speeds and estimated the gusts to be at least 40 mph on the summit.  We definitely had reservations and were in danger, but I also think we knew our limitations.  If it had been raining, snowing, or if the temperature was even 5 to 10 degrees less, we would have immediately turned back.  Without Jim encouraging me to continue early in the day, and without me pushing Jim higher on the mountain, neither one of us would have made the summit. 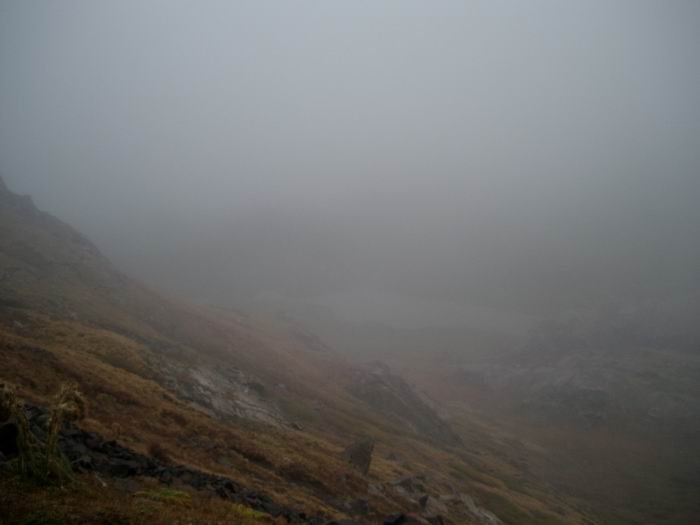 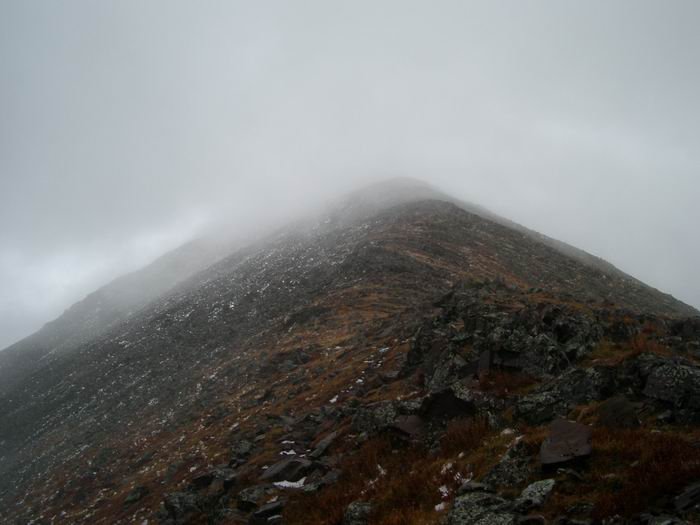 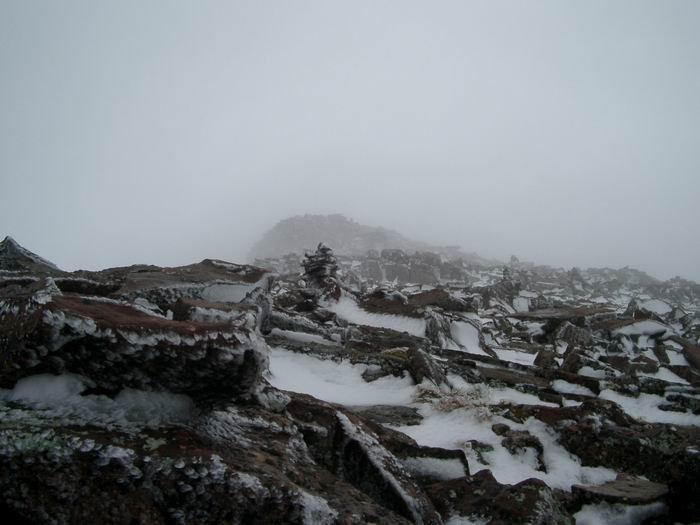 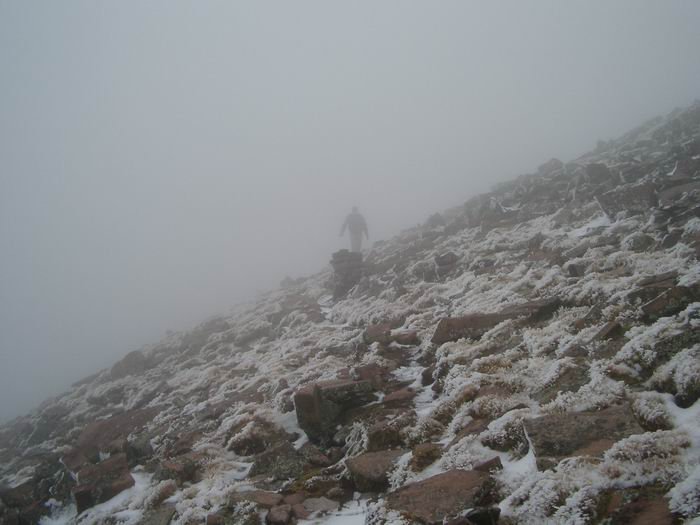 Jim during the ascent of the west ridge of Humboldt Peak. 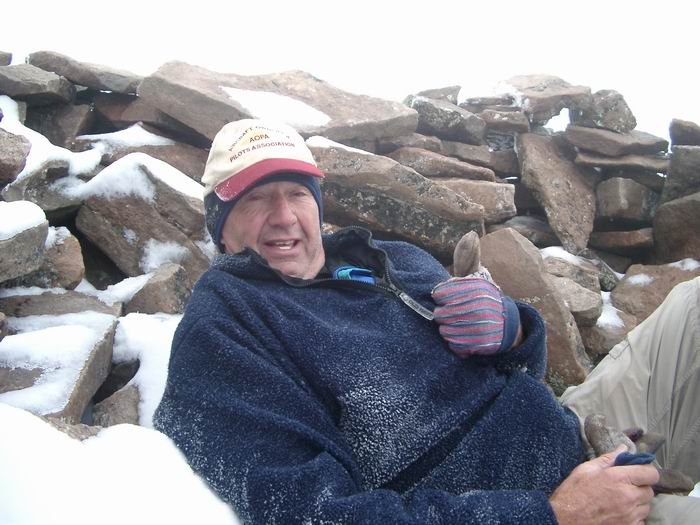 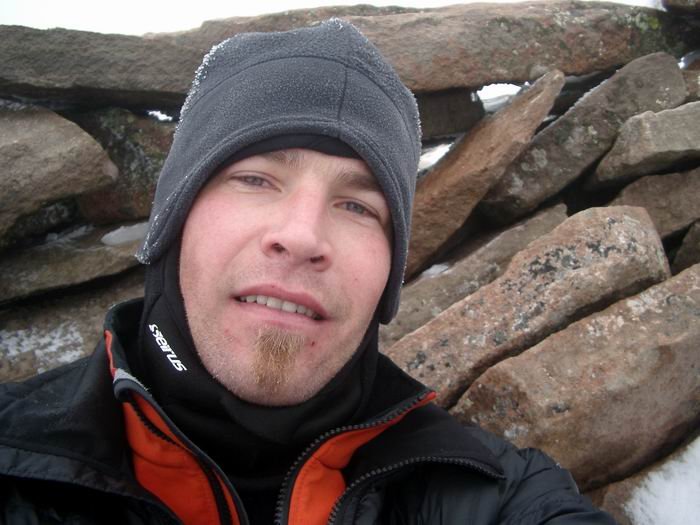 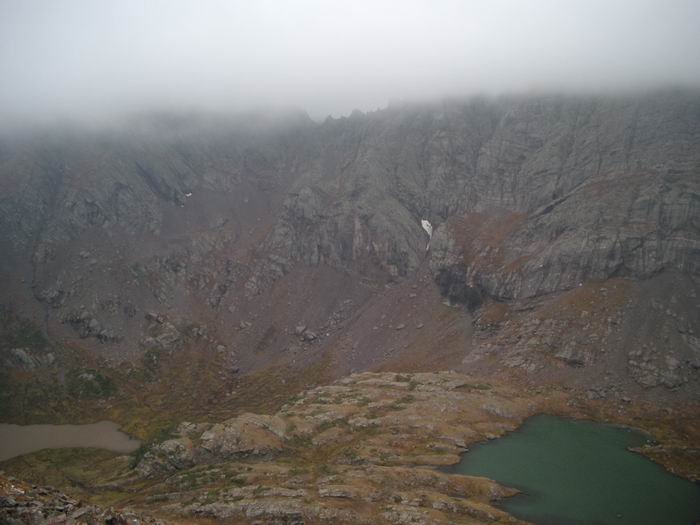 Looking across the valley to Brokenhand Pass. 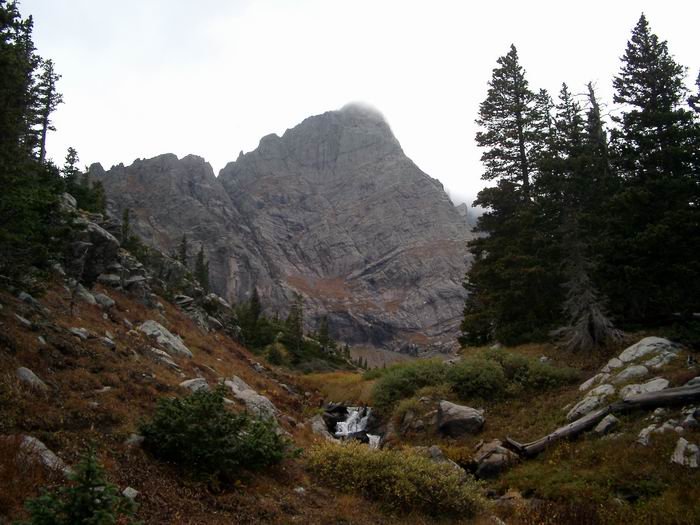 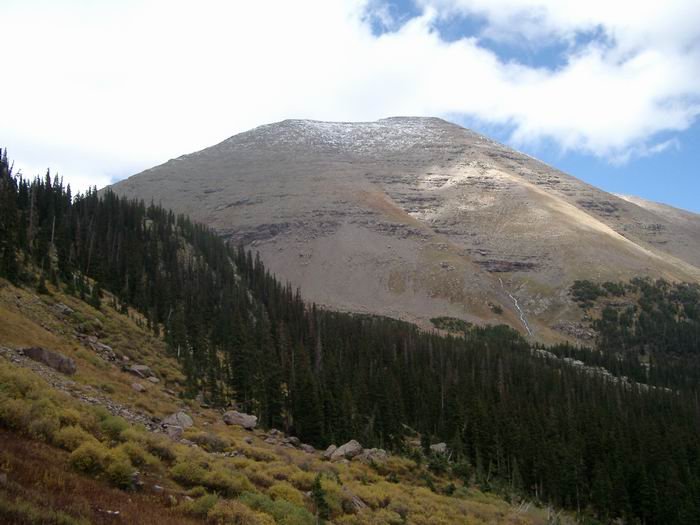