Mount Hood is Oregon’s tallest mountain standing at 11,239’.  It is located approximately 50 miles east southeast of Portland, and is arguably considered the second most climbed glaciated peak in the world next to Mount Fuji.  The primary climbing season is April through June with the class 3 south side route being the most utilized.  I would consider this a grade II climb with moderate snow steepness.  Many novice climbers use this mountain as a training ground to gain experience and prepare for more difficult climbs such as Mount Jefferson and Mount Rainier.  With that being said, Mount Hood is still a serious mountain.

I spent a portion of this past year trying to organize a backpacking trip to Wyoming; however, things didn’t work out and by the middle of May I was back at square one.  Scrambling to find a trip to go on, I contacted Dan Robbins regarding Mount Hood and asked if I could join him on his climb.  After exchanging two or three emails, we had two climbs planned and were set to attempt Mount Hood.  Our first outing took us to the Lost River Range to summit Lost River Peak and become more familiar with using crampons on steeper snow terrain.  The trip went well as we felt comfortable climbing with each other.  As a result of our personalities not clashing, our newfound experience on snow, and the overall success of the climb, we decided to continue with our plans for Mount Hood.

Dan picked me up on the way out of town on Friday morning and we loaded his car with our gear.  The drive went surprisingly fast as we spent most of the time talking about mountains.  We picked up a few last minute groceries in Hood River before heading south on Highway 35 for our first obscure views of the mountain.  The summit was covered with clouds and the sky was overcast.  The temperature was definitely dropping and by the time we reached the Timberline Lodge our shorts and sandals were not appropriate attire.  In order to enhance our climbing skills and knowledge, we decided to take a basic mountaineering course offered by Timberline Mountain Guides.  We checked out the lodge, which is located at the base of the mountain, made sure we knew where to be in the morning, and went back down to find a camp ground.

We found Steel Creek Campground right at the entrance of the road that takes you up to the lodge which was only six miles away.  We spent the evening hanging out and preparing for our class the next day.  We met for the class at 9:00 on Saturday morning and were training in the snow by 11:00.  Although Dan and I were pretty much prepared shortly after we arrived, it took a while for our classmates to acquire the appropriate gear and get organized.  The course covered topics such as learning how to walk on snow, how to use an ice axe, self arresting, and rope travel.  Throughout the day we snacked and hydrated as much as possible.  Even though we didn’t utilize Timberline Guides to assist us to the summit, the instructors were helpful outside of the class by answering all of our questions and giving us a few tips to help prepare for the next day.  The conditions were forecasted to be excellent with clear skies and cool temperatures.

After entertaining the idea of climbing a couple thousand feet and setting up a high camp, we decided to simply day hike the mountain.  We had good luck finding an eating establishment after class and ate the Mount Hood omelet at the Huckleberry Restaurant in Government Camp.  Then we went back to Steel Creek Campground to organize our packs, prepare for the climb, and rest.  Sleep didn’t come easy, and the rest was fitful at best.  The fact that it was still the early evening and we were anxious for the challenge of Mount Hood made it difficult to sleep.

Dan woke me shortly after 11:30 to a starry sky and clear conditions.  After we put on our boots and climbing gear, we headed back up to the lodge to begin our journey.  It is possible to purchase a snowcat ride to the top of the ski area which eliminates two miles and 2,500’ of elevation gain, but we started from the bottom at 6,000’.  We dropped off a form at the climber’s registry and started up the mountain shortly after midnight.  Because of the full moon, we weren’t required to turn our headlamps on during the entire time on the mountain.  I began with a base layer on the top and bottom, shell pants, a technical fleece top, and fleece gloves and hat.  Although I had my shell jacket on when we stopped for breaks, this is basically what I climbed in until right before the Hogsback.  The Hogsback is a narrow ridge of snow that connects Crater Rock with The Chute that exists between the Pearly Gates.  The Pearly Gates are two towers of rock that create The Chute that leads to the summit.  At this point, the shell went on to cut the wind and stayed on until we were back down below the Hogsback.  It was key for me to keep an even pace to avoid overheating when hiking and then cooling too much when we stopped.

Dan wore his base layer, insulating layer, and shell layer after our first break.  We both found what worked for us individually.  The right clothing and speed, along with forcing each other to eat and hydrate regularly, allowed us to remain strong and comfortable throughout the day.  The initial section of the climb was routine and allowed us to enjoy the moonlit views of Mount Hood and establish a steady pace.  The first half of the hike follows the eastern boundary of the Mount Hood ski area to the top of the ski runs.  It was at this point that we saw our classmates cruising up the slopes in the snowcat.  They departed from the lodge at 2:00 and sprang out of the snowcat fresh and ready to go.  We were now at 8,540’ and stopped again shortly to put on crampons.

The next section of the hike became somewhat steeper but didn’t require much in terms of concentration.  We simply made our way up the hard packed snow.  After passing our classmates while they were on their first break, we moved up to the base of Crater Rock and took a short break.  The smell from the Devil’s Kitchen was strong and made Dan feel nauseous.  I also felt slightly sick, but that was mostly from my body not wanting to eat nasty tasting energy bars in the middle of the night.  I primarily maintained my blood sugar levels with Power Bar Power Gel and GU Energy Gel.  We passed between Crater Rock and the Steel Cliffs and began to traverse our way over to the Hogsback.  As I said earlier, this is when I put on my shell jacket along with my climbing helmet.  I also put my trekking poles away and started using my ice axe.  It wasn’t long before we were on top of the Hogsback looking at the crux of the climb.  We debated for five minutes about roping up before I finally suggested we free climb it and fall in behind a rope team of four that was getting ready to depart.  Dan agreed and off we went.  Several times on the way up we were stalled by the rope team ahead of us as I followed behind their end climber.

The snow was extremely hard and there was a well defined path all the way up to the bergshrund.  The bergshrund is a large crevasse or crack in the ice where the glacier is pulling away from the mountain.  The trail then led across a snow bridge to the left of the bergshrund, and then switch-backed to the right above the large crevasse.  The climbing became steeper at this point and although I was comfortable going up, I became concerned about how we were going to descend.  Dan asked how I was doing, and I admittedly said I was a bit nervous.  He felt as though we were doing great and wouldn’t have any problems.  This reassured me and we pushed on.

Dan was right, about five minutes later we were on top of Oregon enjoying the views.  It took us 6 hours to go the 4 miles and 5,300’ to get to the top.  The summit was a bit windy and cold, especially on your hands if you took your gloves off.  We snapped some photos, enjoyed our accomplishment, and started to make our way back down 20 minutes later.  The Chute between the Pearly Gates and the area above the bergshrund were much easier to down climb than I anticipated.  We simply used the frozen plunge-steps of previous climbers that provided very secure footing.  Before we knew it, we found ourselves back on the Hogsback.  I had already consumed all three quarts of water that I packed along, but wasn’t concerned as it was all downhill from here.  We decided to call our dads and wish them a happy Father’s Day and also say hello to our wives.  The rest of the descent was uneventful with the exception of some fun glissading.

I was certainly tired when we were done, but given the fact that I had a relatively heavy pack on and wore plastic climbing boots with crampons all day, I actually felt pretty good when we finished.  Dan felt good too and we were proud of our accomplishment.  We drove back to Boise, Idaho, on Sunday afternoon and were in town by 7:30.  Neither of us was able to get to bed very early, so with the exception of the two hour nap on Saturday night, it was pretty much a sleep free weekend. We were back at work on Monday morning only 25 short hours after reaching the summit of Mount Hood.  The fact that we paid attention to a lot of little details contributed to a successful climb with calculated risks and plenty of energy in reserve. 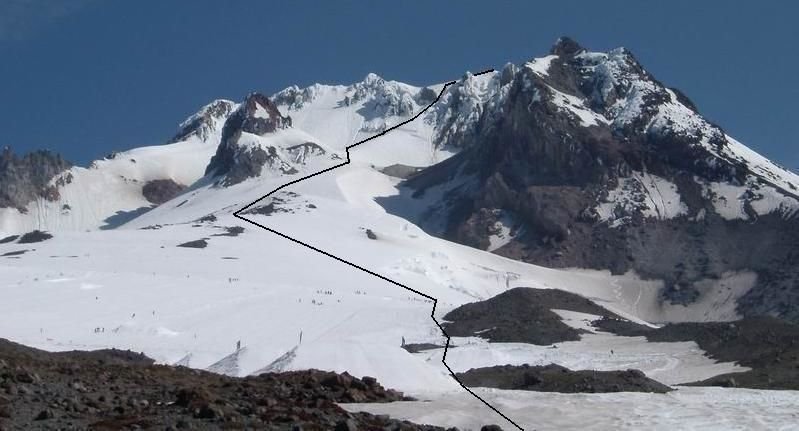 Mount Hood from the south including our route.

Mount Hood from the north. 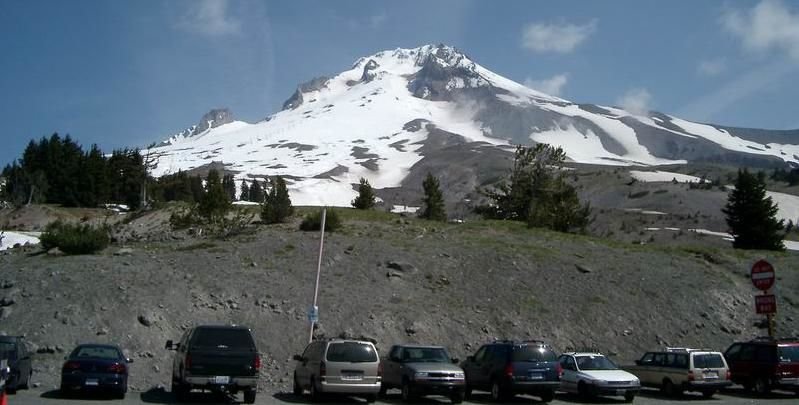 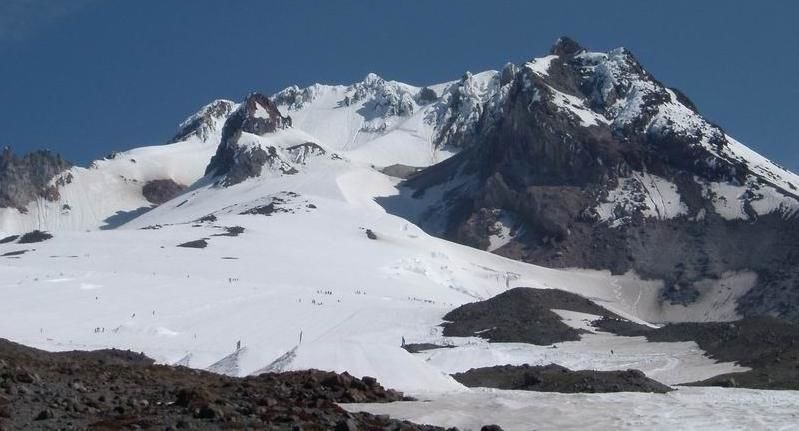 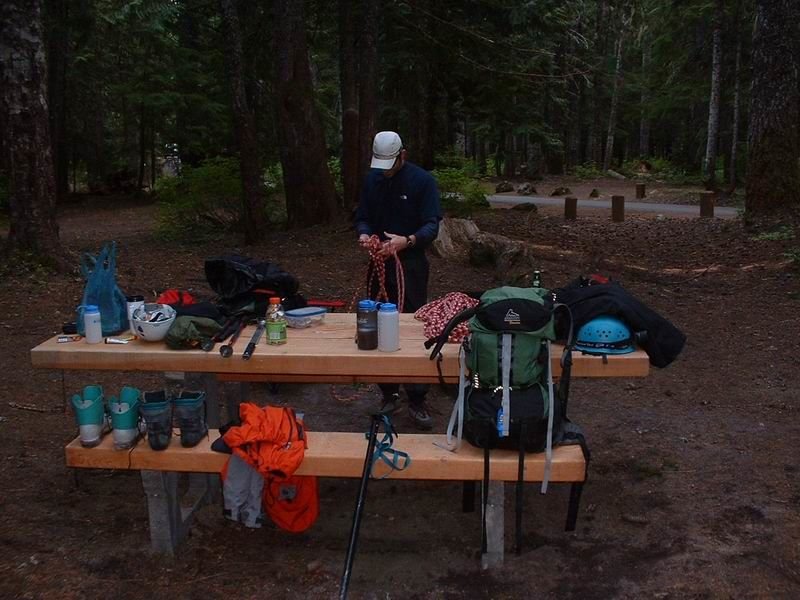 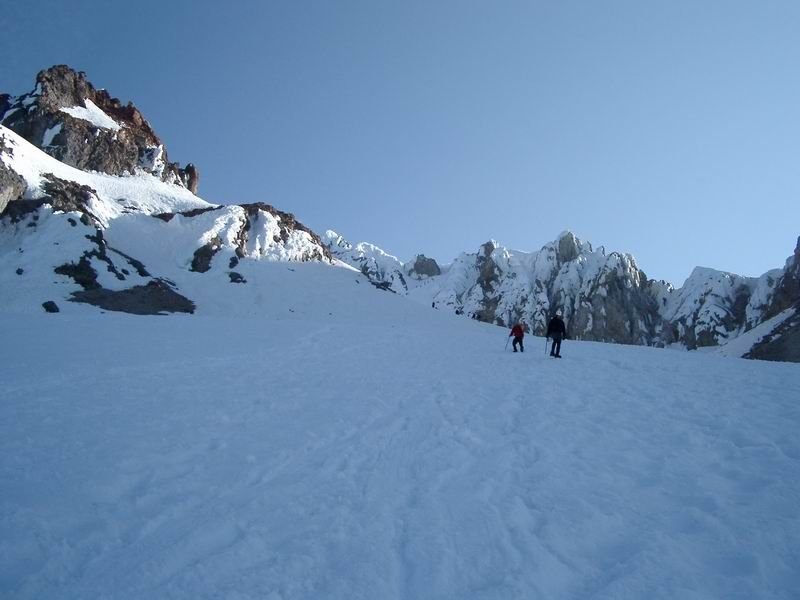 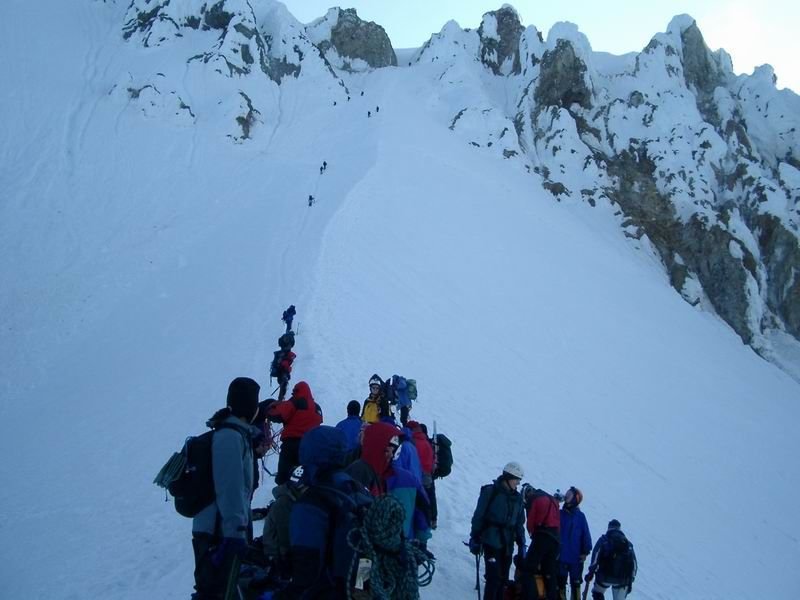 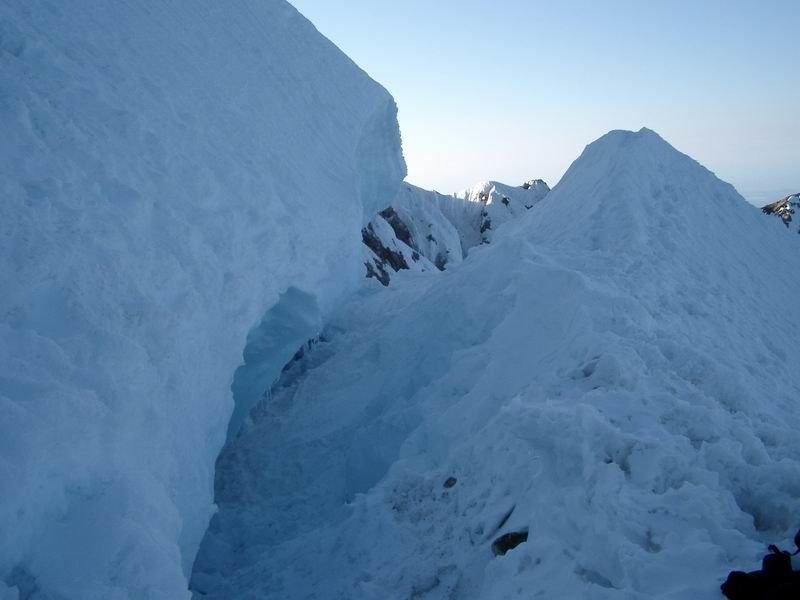 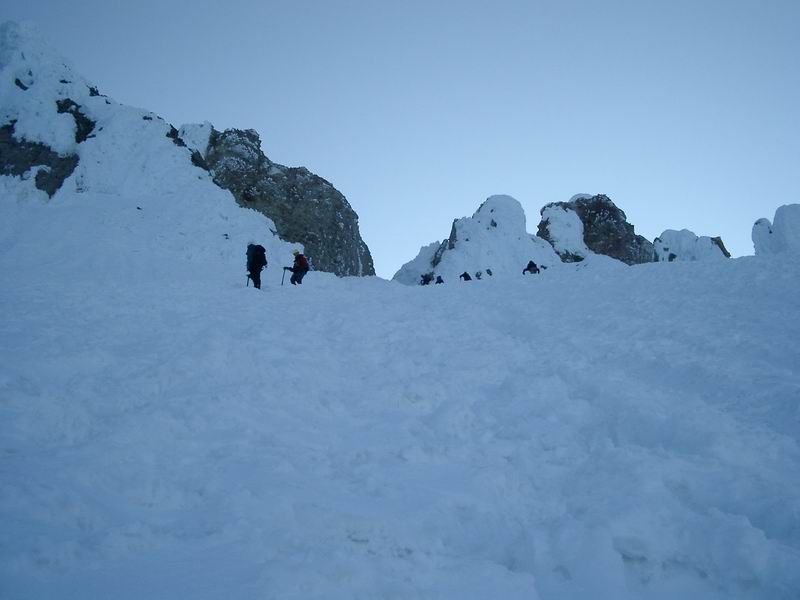 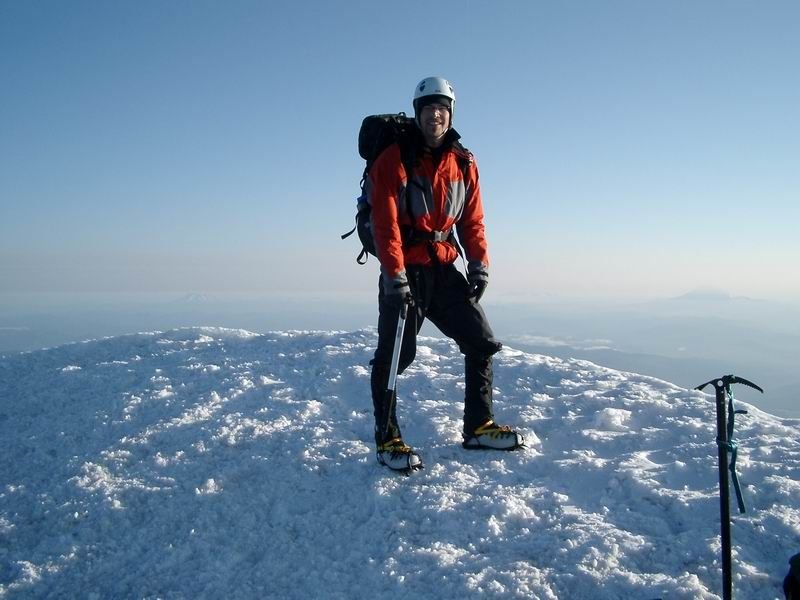 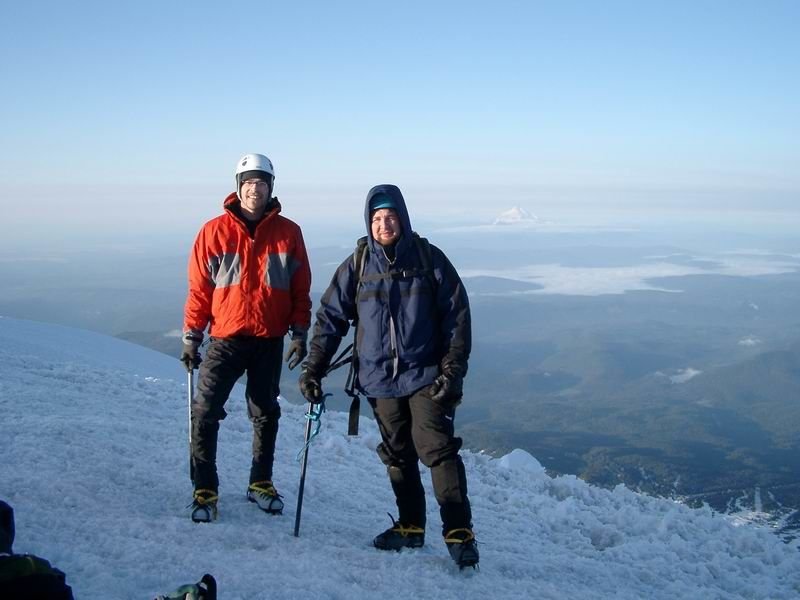 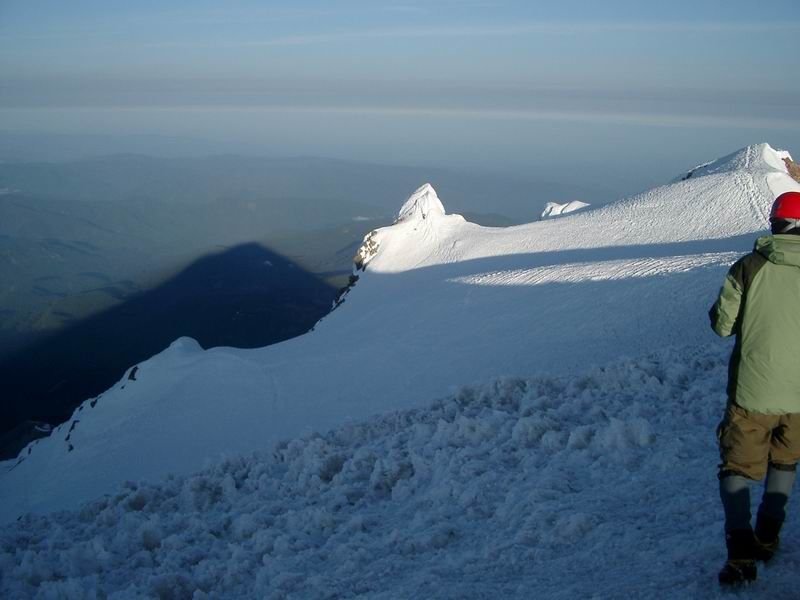 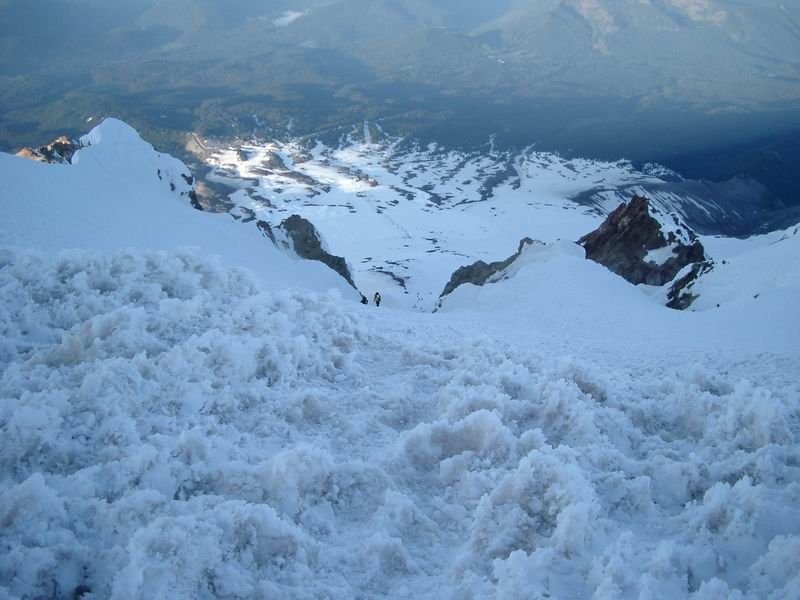 Looking down through the Pearly Gates. 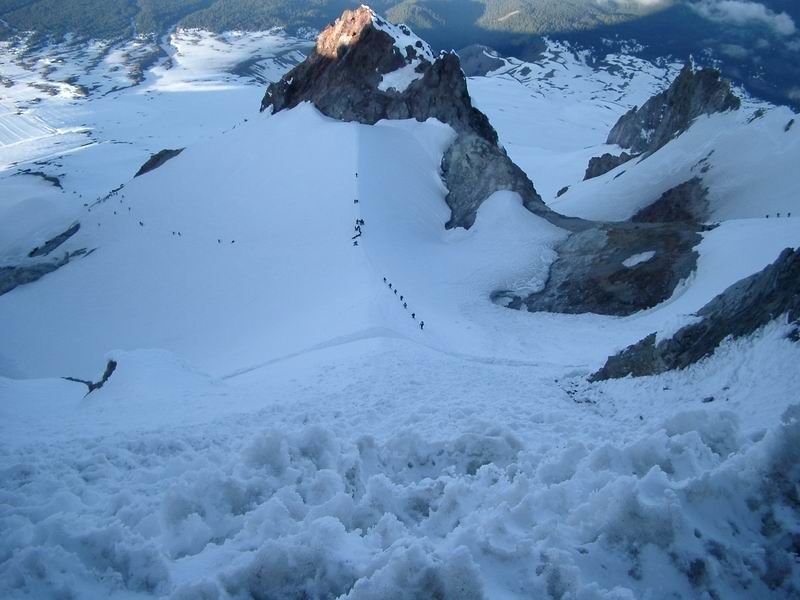 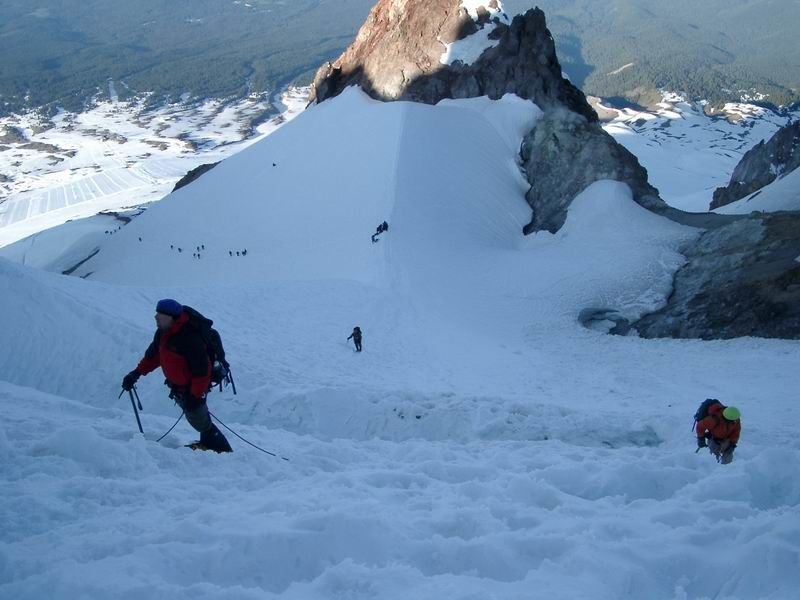 The Hogsback from just above the bergshrund. 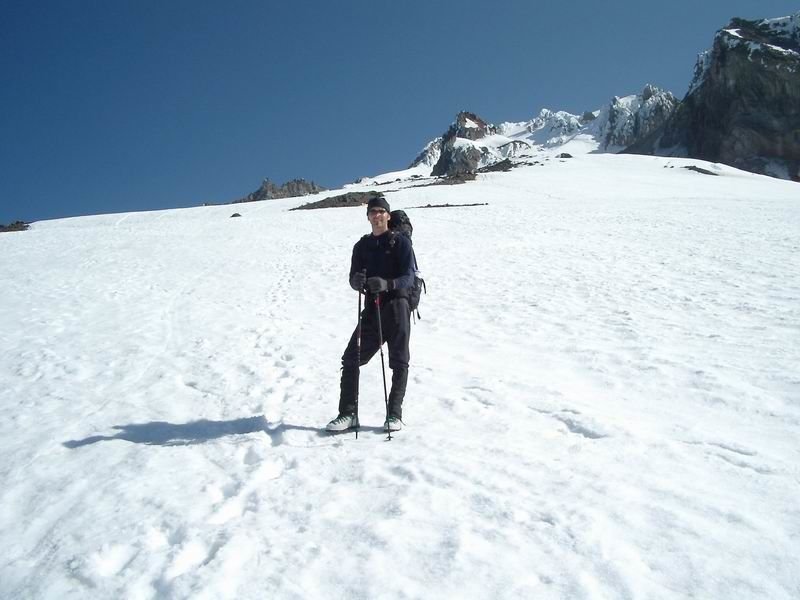