I didn't anticipate returning to the Lost River Range as soon as I did after attempting this peak a couple of weeks ago, but things worked out and I made the trip with Daniel Robbins.  We left Boise Saturday afternoon to make the drive and sleep at the trailhead in order to get an early start.  I upgraded my beer from Pabst to Moose Drool, and after we drank one, we went to bed for a fitful night of sleep.  We got an alpine start waking up at 3:40 and hiking shortly after 4:00.  We hiked the first section of the climb in the dark.  Dan started off feeling poorly, but recovered quickly and we began making great time to the entrance of the Super Gully.  The initial portion of the hike is relatively straight forward, but it was still steep and required effort from the start.  When we made it to the tree line, the headlamps were off and we identified a distinct trail in the scree that leads to the couloir.

From this point, it was only about 25 minutes of hiking before we reached the snow.  After slight hesitation, we strapped on our crampons and began testing our snow climbing skills.  The crampons provided solid footing and stability on the steep snow.  We adjusted our walking and got used to crampons quickly.  Snow conditions were perfect as our points bit into the snow but our boots stayed firmly on top.  As we moved up, the gully got steeper and steeper.  In several areas we passed avalanche, rock fall remnants, and scree that laid on top of the snow for several hundred feet at a time.  For the most part, we traversed back and forth across the gully until the final steepest section to the top of the Super Gully.  At this point, we started climbing straight up planting a foot, then the ice axe, then the other foot, and finally placing our hand on the snow.

Once on top the gully, the mountain opened up to an enormous scree and talus field.  We elected to proceed to the right, remove the crampons, and work our way up to the ridge line.  The grade didn't relent much; however, I would say there was less exposure due to the fact that we maneuvered above a large flat outcropping, and also because arresting a fall in the rocks would have been easier than on steep solid snow.  Initially the rock was extremely loose and rotten.  Approximately half way up the talus tightened and the climbing became easier.  After we made it to the ridge, we caught our first look at the true summit and were in the sun for the first time all day.  We peeked over the snow cornice seeing how the bottom of it was giving away in sections.  The climb from here to the summit was very similar to that of Mount Breitenbach.  We made our way up the ridge to the south summit on relatively good rock staying very near to the actual ridge line.  It didn't take long to reach the south summit where a wooden stick was stuck into a rock cairn and we were able to see clearly to the north.

On the summit ridge, we kept our crampons on nearly the entire time and were quickly on the summit.  We only stayed long enough to take a number of photos and sign the summit register.  We were the second team of individuals to climb the peak this year.  In the 15 to 20 minutes on top, the snow was softening and we headed back down.  In hindsight, this didn't pose a problem in the gully as it was protected from the sun for a large portion of the morning.  Regardless, from the summit to the top of the scree field was easy going.  On the descent of the gully, we began to feel the burn in our thighs as we worked our way down.  After we made to the bottom of the gully, we removed the crampons, did a bit of glissading, and hiked back to the trailhead.  We drove to Arco, Idaho, to have lunch at Pickles Place and then drove home.

It took us 5 hours and 25 minutes to summit and 2 hours and 55 minutes to descend.  Although one guidebook suggests that this is a 5 to 8 hour round trip, I think our time was respectable.  I do not think that I would want to climb this peak in any other conditions.  The weather cooperated, the snow remained solid, and I had a good climbing partner.  This was one of the best hikes I have done so far. 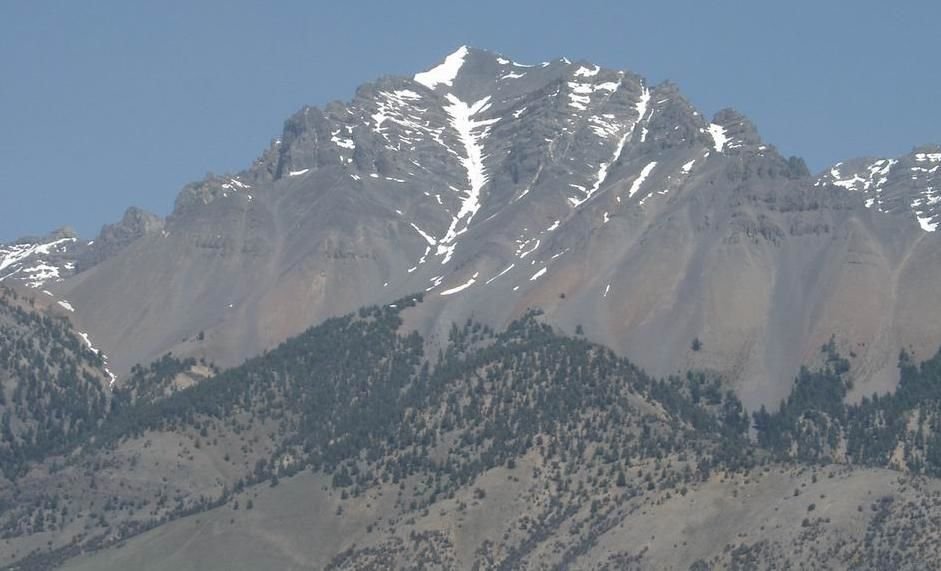 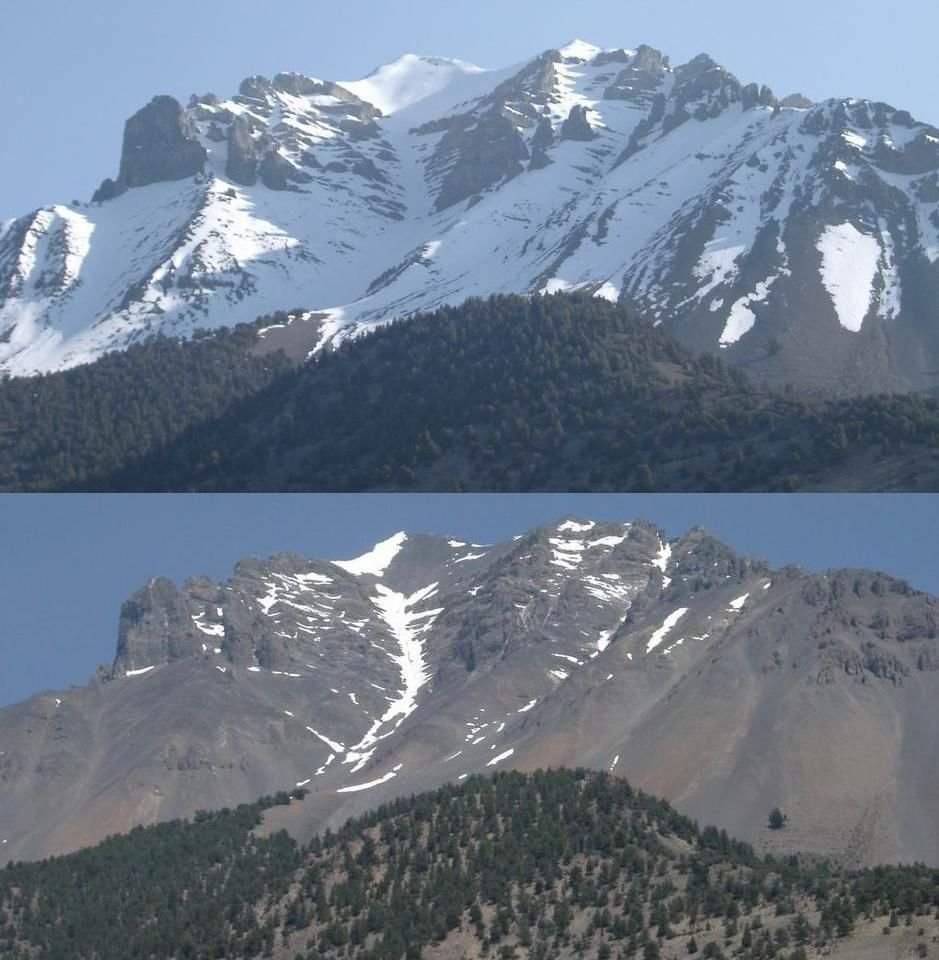 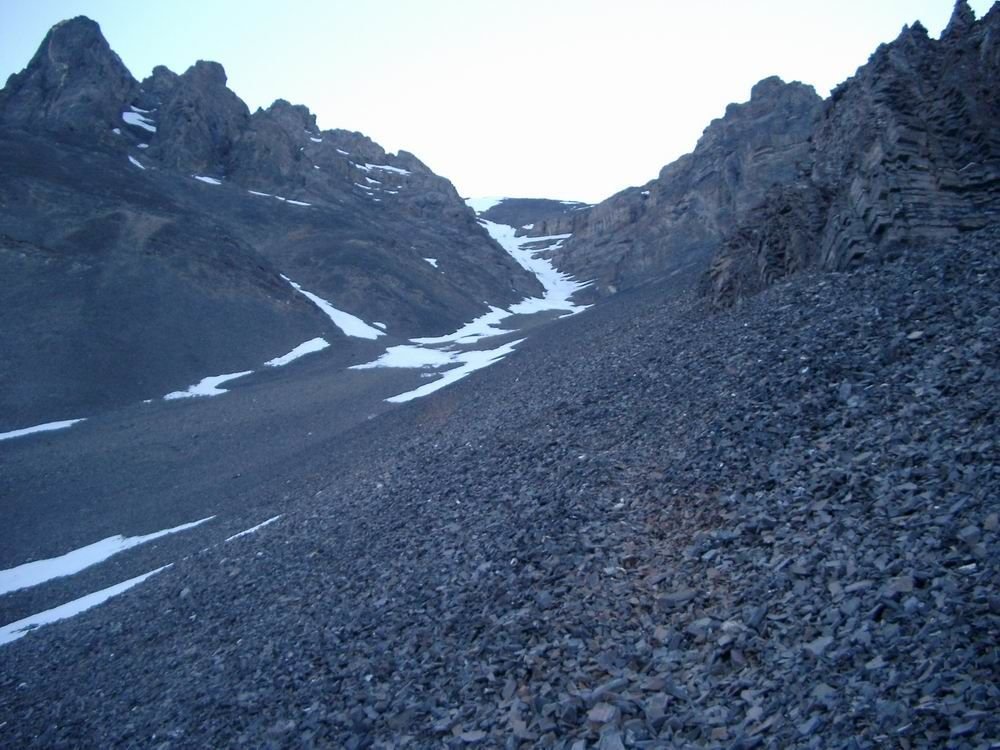 Heading towards the start of the gully. 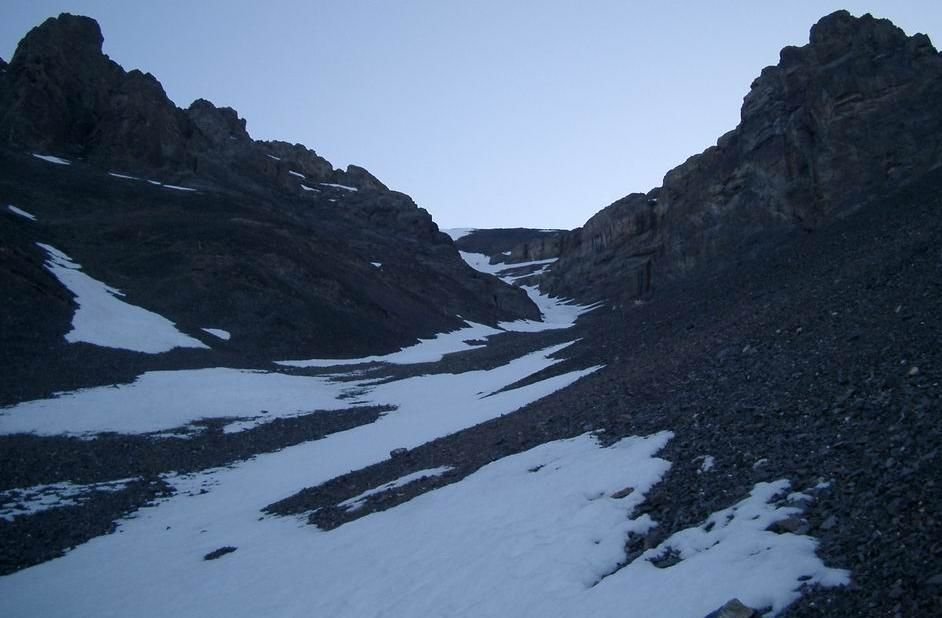 Start of the Super Gully. 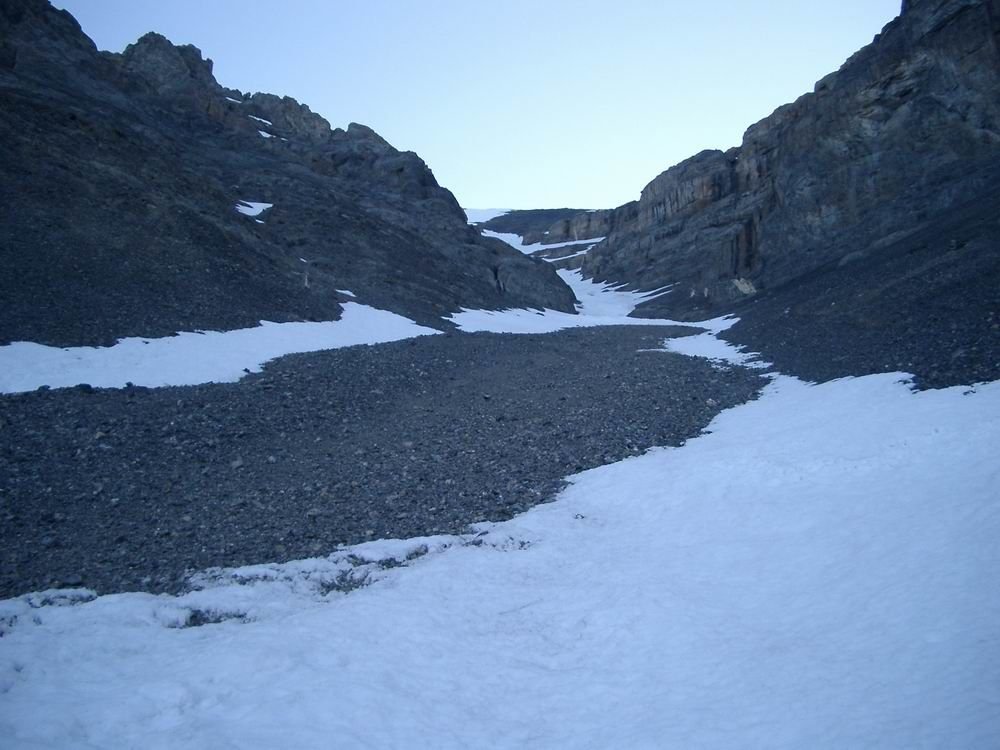 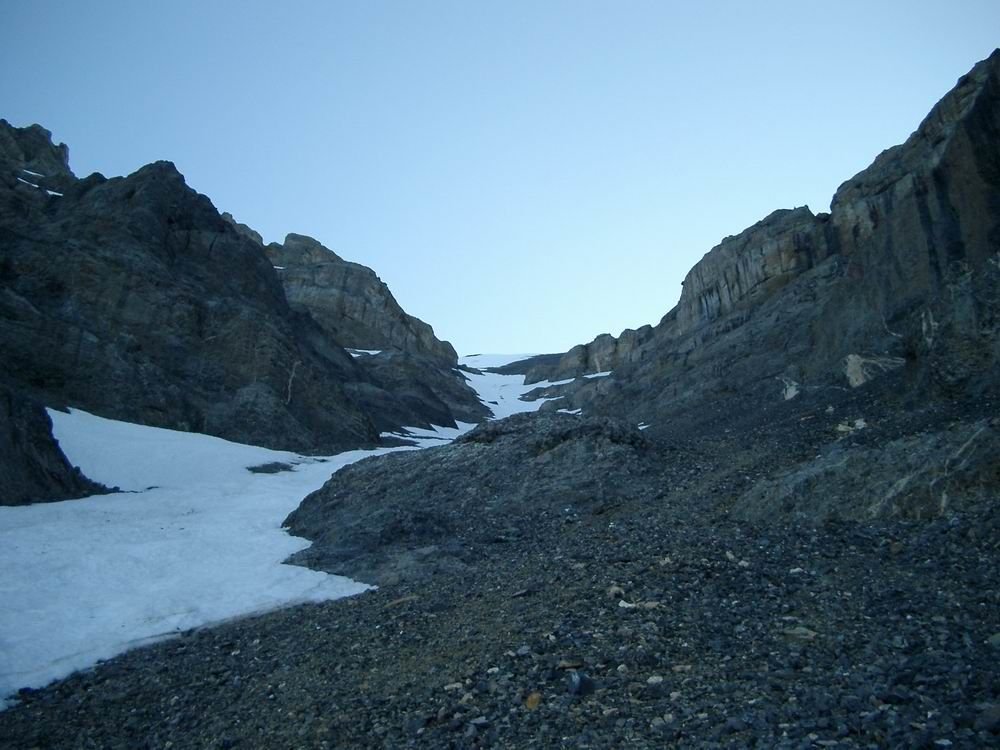 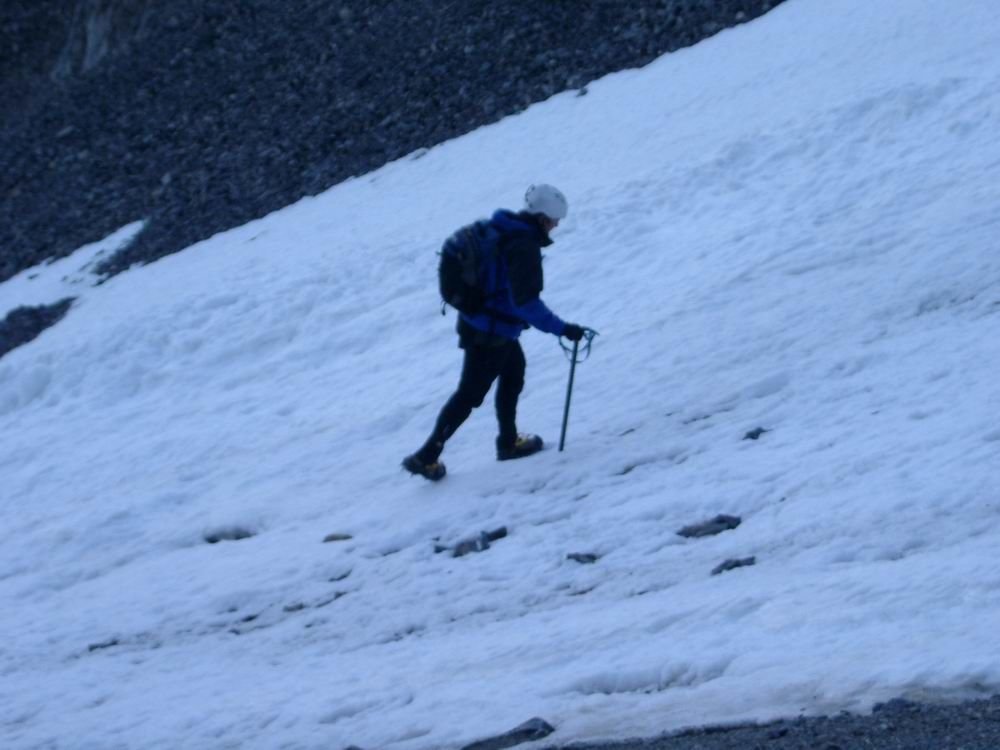 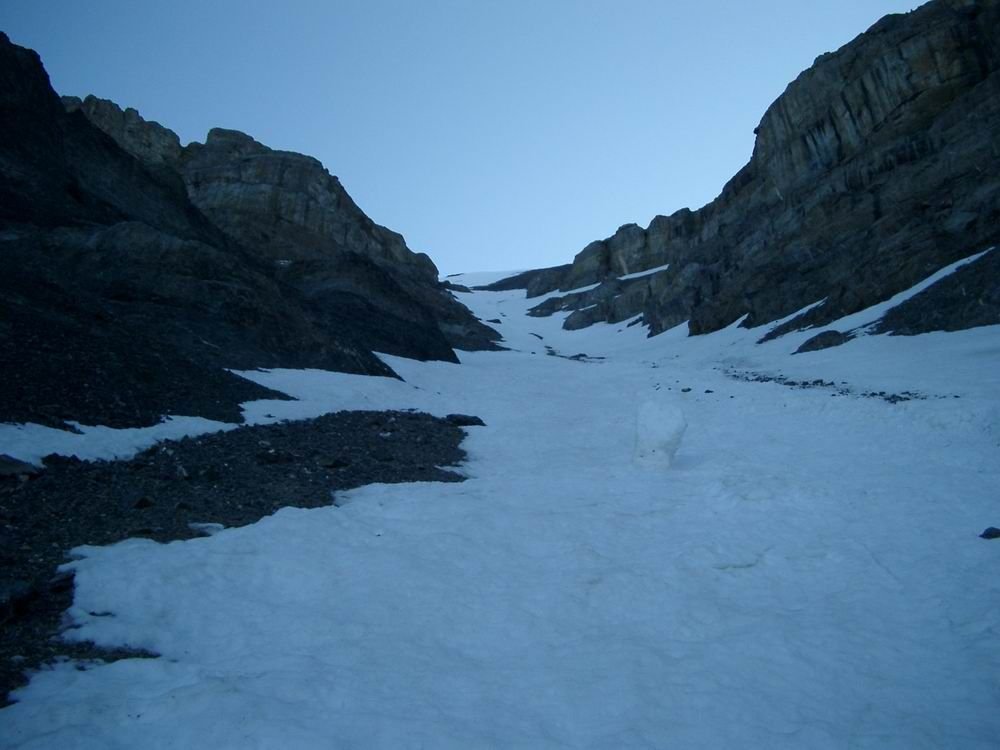 Half way up the gully. 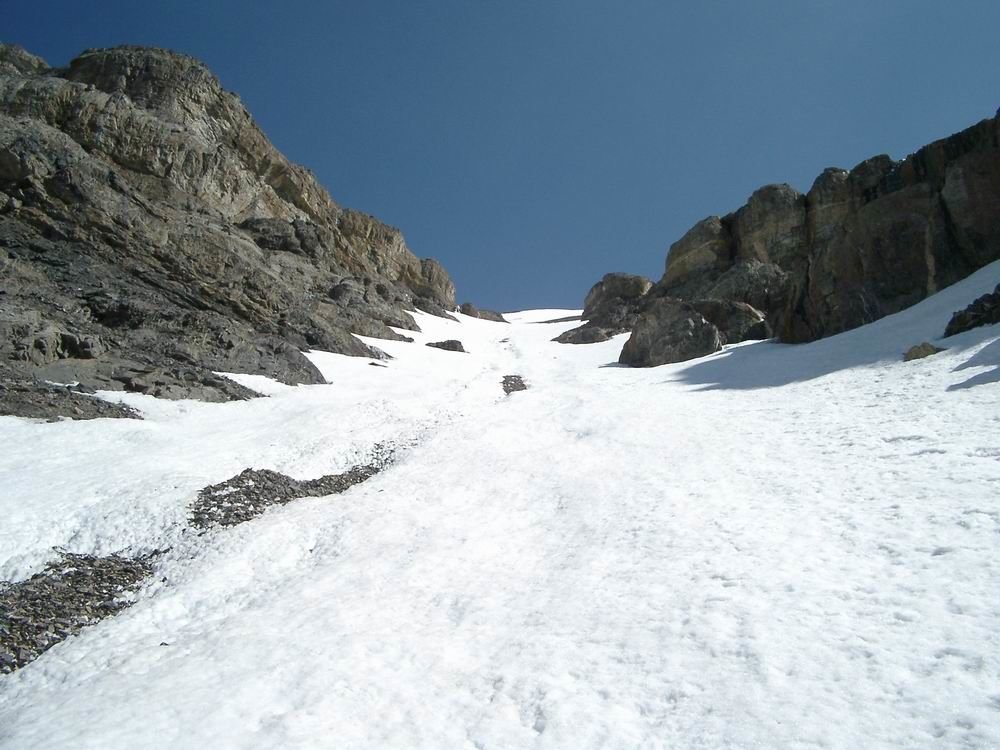 Sun on the gully as we descended. 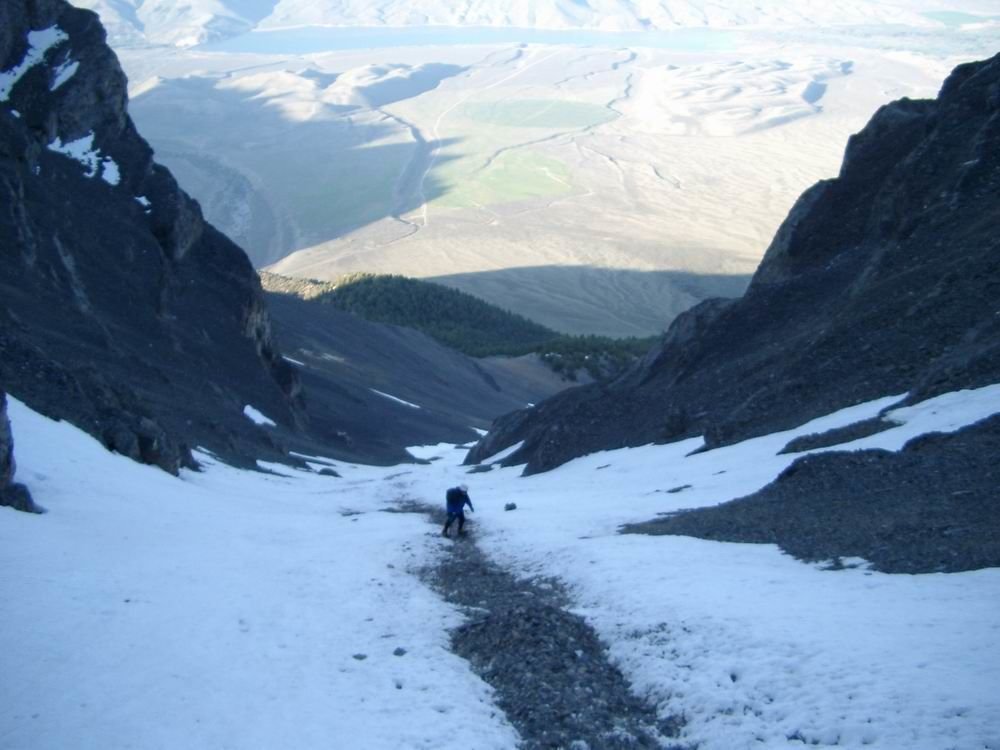 Dan near the top of the gully. 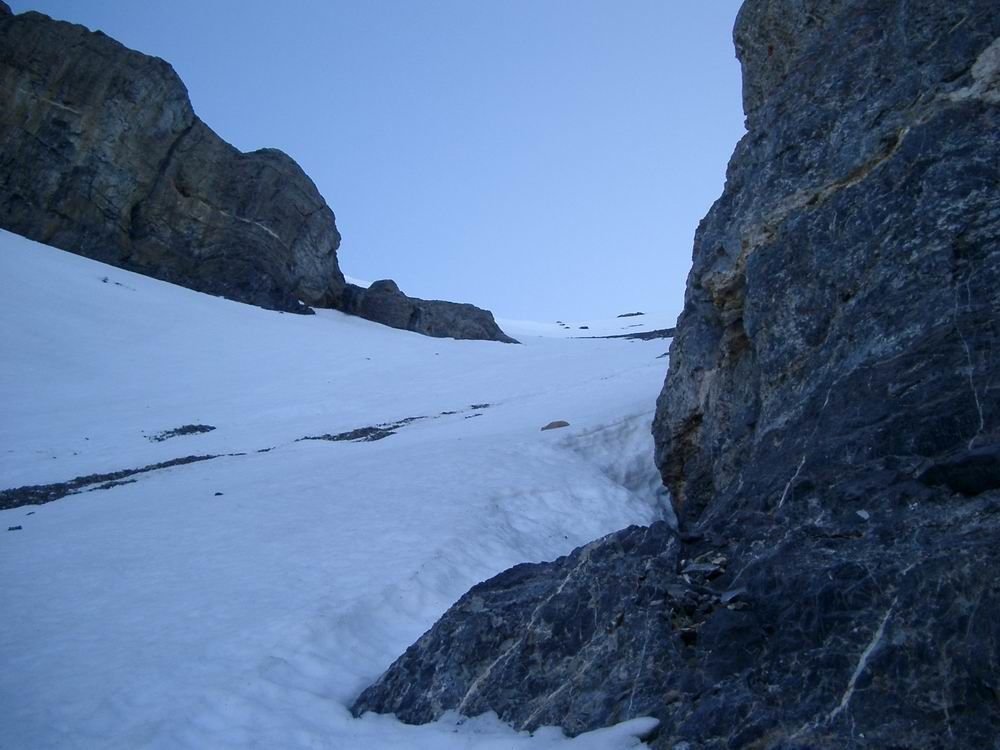 Nearing the top of the climb. 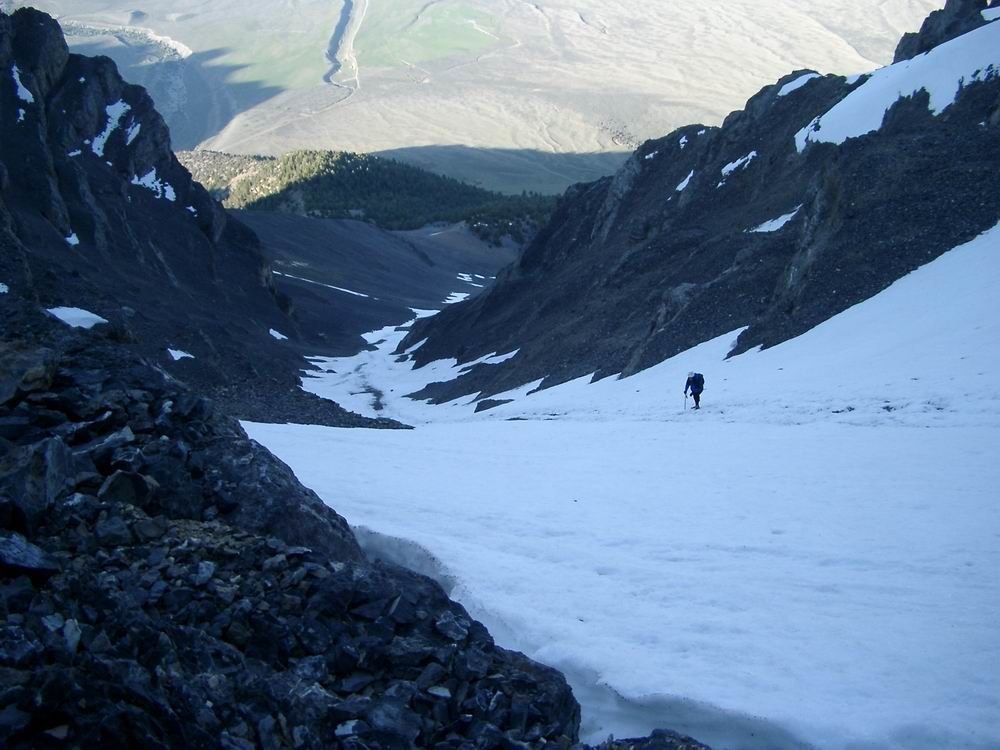 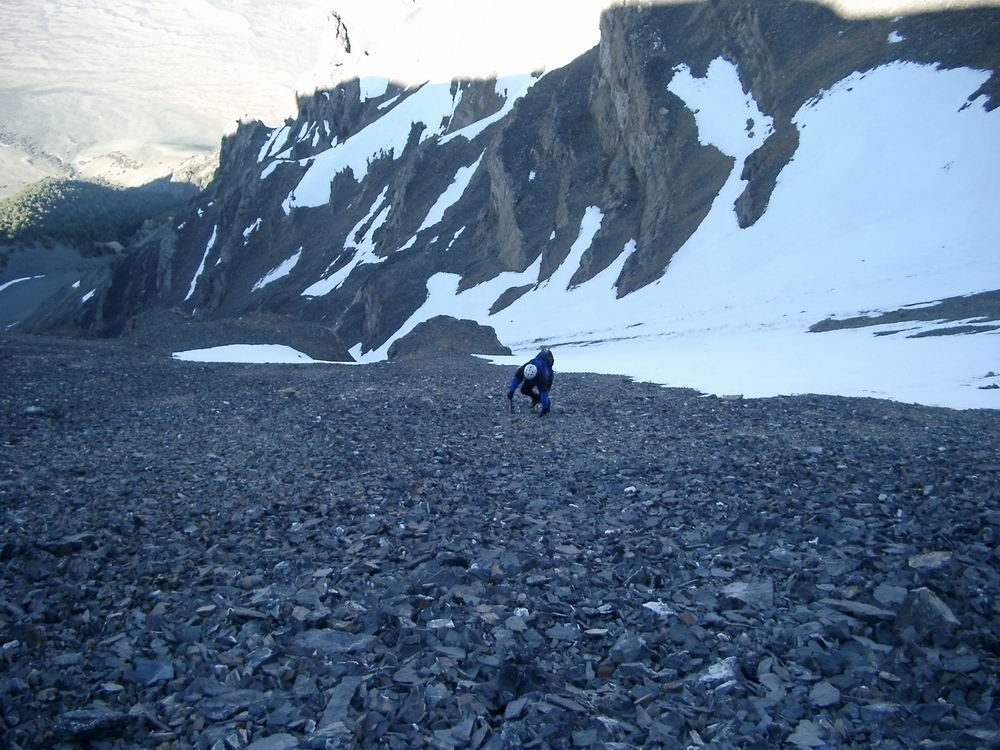 Dan moving from snow to rock. 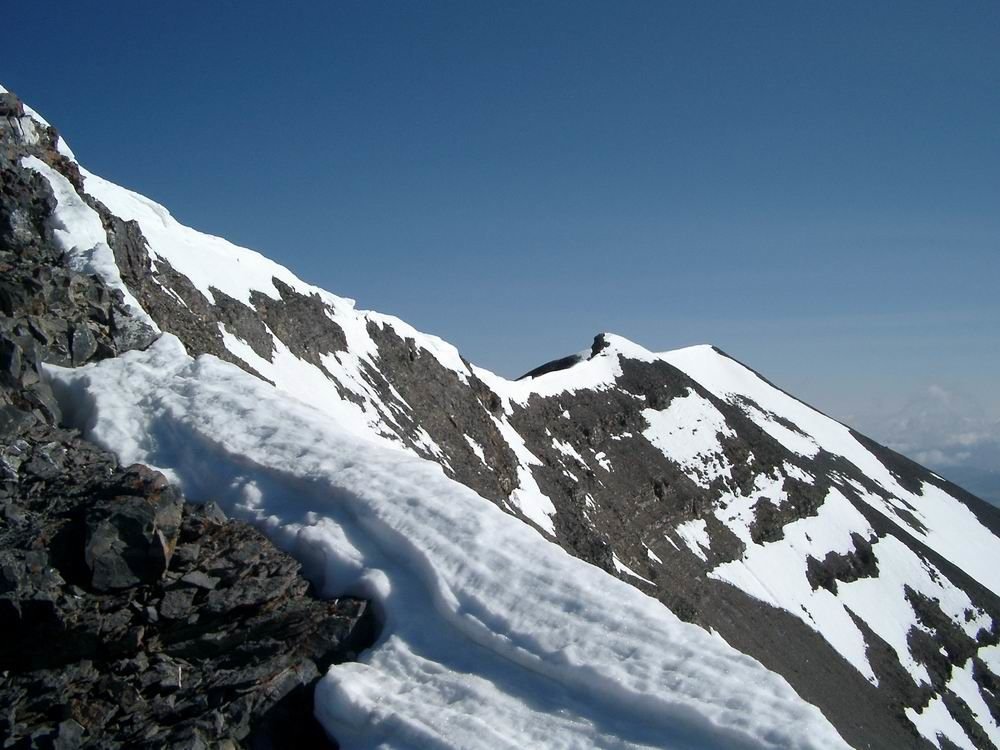 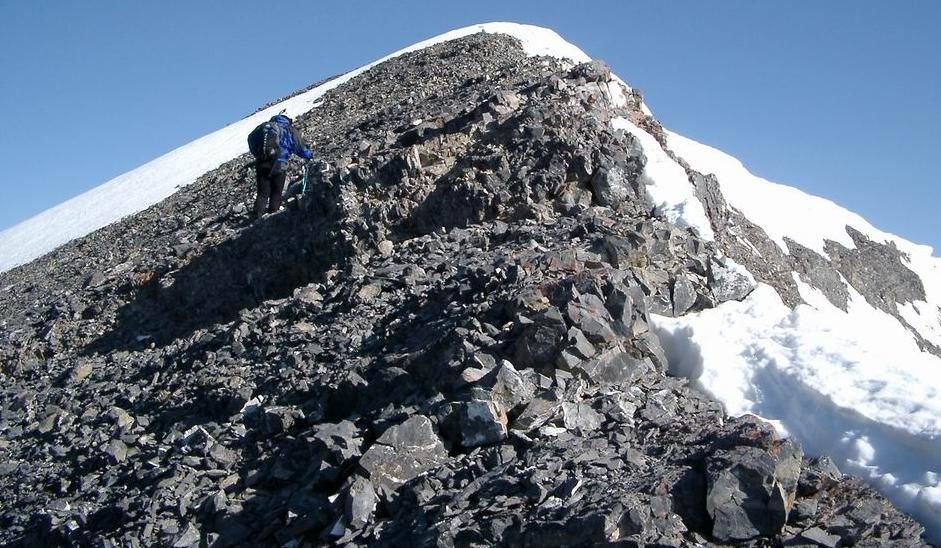 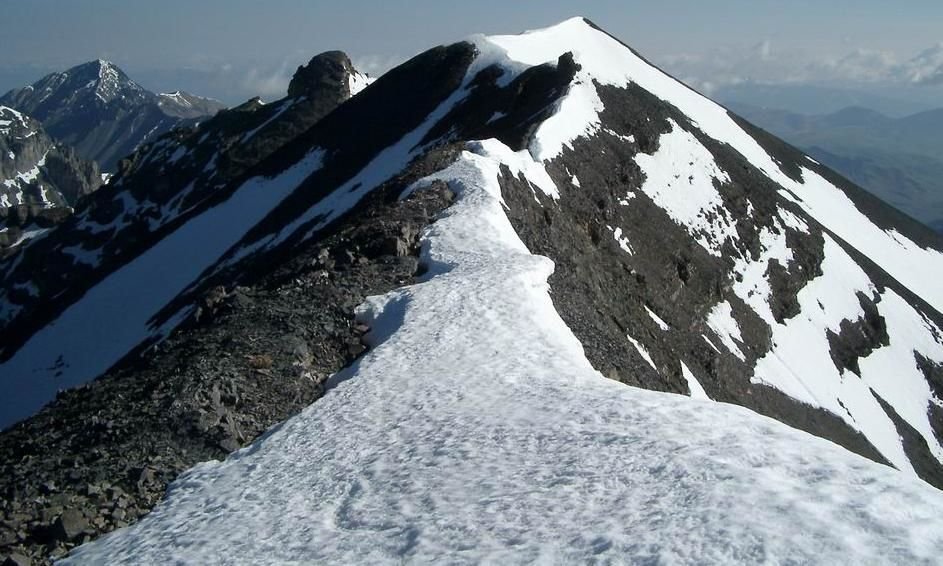 Final ridge to the summit of Lost River Peak. 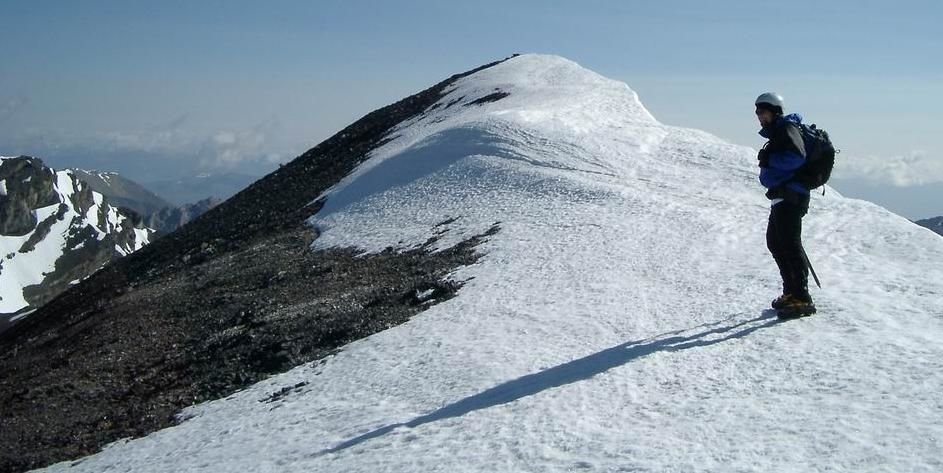 Dan on the final push to the summit. 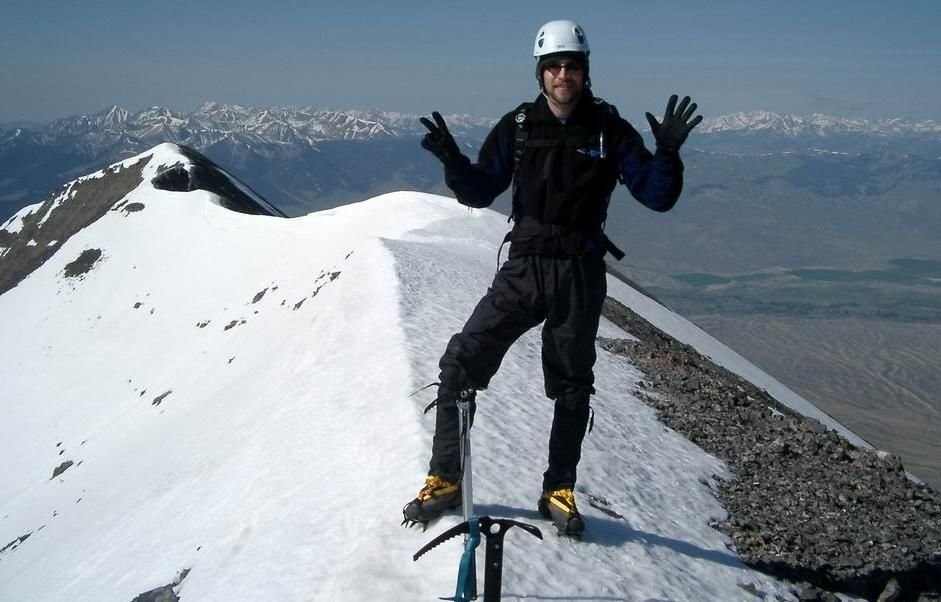 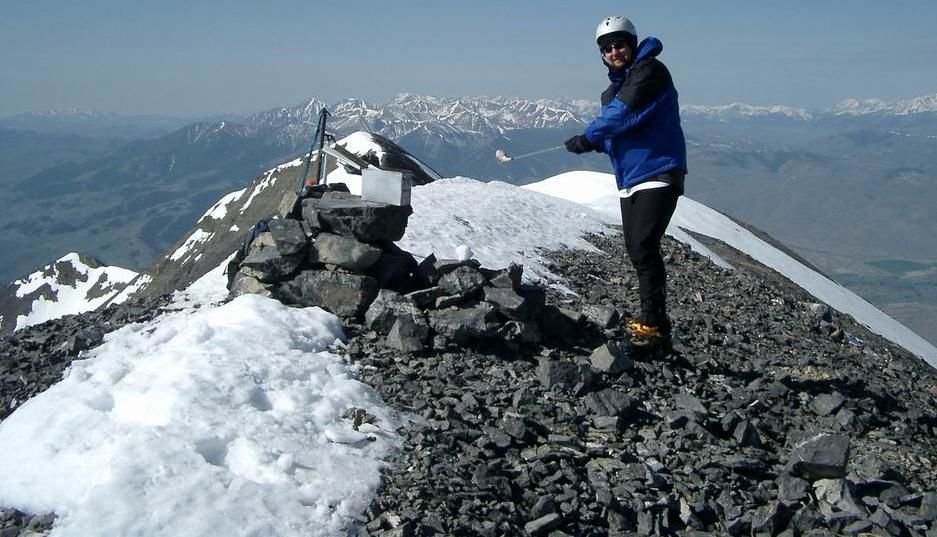 Dan on the summit of Lost River Peak. 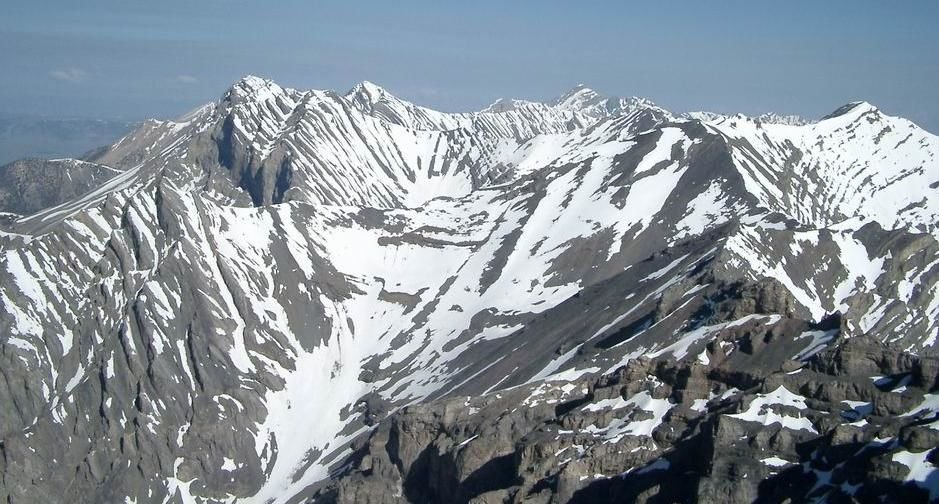 Views to the north from the summit.