I hadn’t been out hiking since the middle of August when I finished the 12ers, so I decided it was time to get out again.  I didn’t want to drive far, but I still wanted to attempt a relatively big peak.  I returned to the Pioneer Mountains northeast of Hailey, Idaho.  Old Hyndman Peak and Cobb Peak make up the second and third legs of what is sometimes referred to as the Trifecta of the Pioneer Mountains with Hyndman Peak completing the group of three peaks.

I left Boise, Idaho, on Thursday evening after work and made it to the Hyndman Peak trailhead shortly after 8:00.  After organizing my gear, I had a bite to eat, read for a while, and went to sleep in the back of my Trooper.  I needed daylight for the entire trip since I was biking part of the trail, so I did not get up very early.  Although the 2.4 miles I biked only gained 800’ of elevation, I anticipated it being difficult since I am not an avid biker.  In fact, my bike had not been ridden all summer and I had to inflate the tires the night before.  The primary reason to bike at all was simply to speed up the descent.  I'm not sure this was a good decision or not.

The morning was cool, but I stayed warm peddling.  I cached my bike where the trail splits.  To the left is the main trail up Hyndman Basin to Hyndman Peak, and to the right you ford Hyndman Creek and make your way into Big Basin.  I wouldn’t consider the fork to be obvious, but there is some old fence posts and wire that I kept an eye out for to help me determine its location.  My goal for the day was to start up Hyndman Basin, leave the trail around 9,400’ and climb the west ridge of Cobb Peak to the summit.  At that point, I would determine whether I was up to descending the east face of Cobb Peak to attempt Old Hyndman and finally exit down Big Basin.

The hike into Hyndman Basin was uneventful and most of the west ridge of Cobb Peak was too.  The initial section was steeper than the west ridge from 10,000’ to 11,000’.  As you near the summit, the ridgeline narrows and the route-finding and climbing increase in difficulty.  The guidebook I used recommended staying well below the ridgeline which I attempted to do.  Feeling as though I was only 100’ away from the top of Cobb Peak, I picked a line up a gully and gained the ridge on large slabs of rock.  It was fairly steep, but there were plenty of cracks and holds for climbing.  Unfortunately when I came to the crest, the north face dropped off precipitously and I was not as close as I originally thought.  In addition, the ridgeline still looked technical.  I should have traversed further east over a couple of ribs down below and then climbed the final chute that leads directly to the summit.

Rather than dropping back down, I decided to try and continue up high.  I completed a difficult move on the north side of the ridge that required me to expose myself more than I was comfortable with.  If I encountered a similar pitch, I was going to down climb and use the class 3 route.  Although I did run into another section like the one previously described, it was on the south side so the exposure was considerably less.  After a bit more class 3 climbing I was on top. A combination of the bike ride in and the final section to the summit made me feel somewhat weak and nervous.  My blood sugar level was low (I have Type 1 diabetes.), but I was glad to have made it.  I signed the crude summit register, took several photos, and had something to eat.  It didn’t take long to start feeling better.

Tom Lopez’s “Idaho: A Climbing Guide” designates the east face of Cobb as class 3 to 4.  With the exception of the Lost River Peak and Mount Hood, both of which I consider class 3/grade II snow climbs, I have only done class 3 scrambling.  In addition to my lack of technical climbing experience, I was also solo.  These factors made me reassess my original plans and think twice before dropping off the summit.  After regaining some strength, considering the route I took up Cobb, and bearing in mind that I was going down, I finally decided to give it a shot.  When facing east on Cobb Peak's summit and looking down, you essentially have three options.  You can go left and take the gully next to the ridge between Old Hyndman and Cobb, you can go right and take the larger gully that is apparent on the topographic map, or you can go down the middle gully.  I didn’t like the looks to the left, and Lopez defers to the north side of the east face, so I went down the middle gully.  In addition, it appeared the most stable and seemed to provide the best protection from my initial perspective.

I dropped several hundred feet and was feeling comfortable.  Although there were several sections where I had to down climb face in, I never ran into any serious problems that couldn't be solved.  I continued down the chute on relatively solid rock with ample holds.  The steepness of the mountain may actually have assisted with the climbing by eliminating any location where loose rock could build up and cause greater obstacles.  This was challenging route with over 1,000’ of sustained class 3 and 4 climbing.

Once the gully began to open up, I found myself above a dark band of rock that was leading me to the southeast.  This band appeared to cliff-out southwest of Lake 10241, but this didn’t concern me because I was trying to traverse back north towards Old Hyndman Peak.  Now at the lake, I had to change gears again and start heading up to the east ridge of Old Hyndman Peak.  Compared to the east face of Cobb, this section of the hike was tame.  After making it to the saddle between Old Hyndman Peak and Point 11442, I dropped all of my gear with the exception of a long sleeve shirt, my camera, and some water.  Although, I only had 750’ to go I knew it was going to be difficult and I was fairly tired.  It really wasn’t a bonk where I could eat something a perk up, it was exhaustion.  The ridge up to black rock dike contains stable footing on relatively tight rock.  Climbing in the dike is fun and well protected.  At the top of the dike, you are almost done with only approximately 25’ to the summit.

I thought the views from the top of Old Hyndman Peak were great.  Hyndman Peak’s east ridge looked very steep, Cobb looked impressive, and both Hyndman Basin and Big Basin were enjoyable to view.  I signed the summit register, took some photos, and began the long journey back to my bike.  By the time I had gotten to Lake 9758, I wanted the day to be over.  The fatigue, bushwhacking, and route-finding had taken their toll.  Getting out of Big Basin proved to be more difficult that anticipated.  My legs got cut up on the way down, it took me longer than expected to find the old jeep road to lead me back to my bike, and I fell down in the creek on the way back too.  On top of that, I almost ditched my bike a couple of times on the ride out.  Needless to say, I was happy to get back to the Trooper and on my way home.  Despite the troubled exit, this was a great and challenging hike that I enjoyed immensely.  My total trail time was 9 hours and 15 minutes. 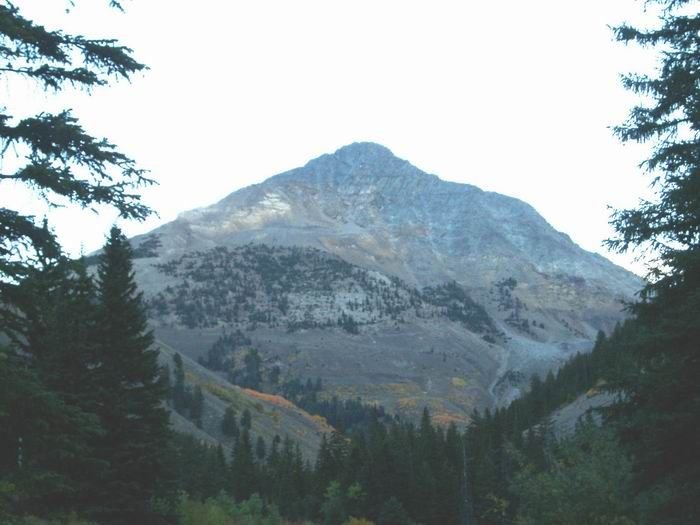 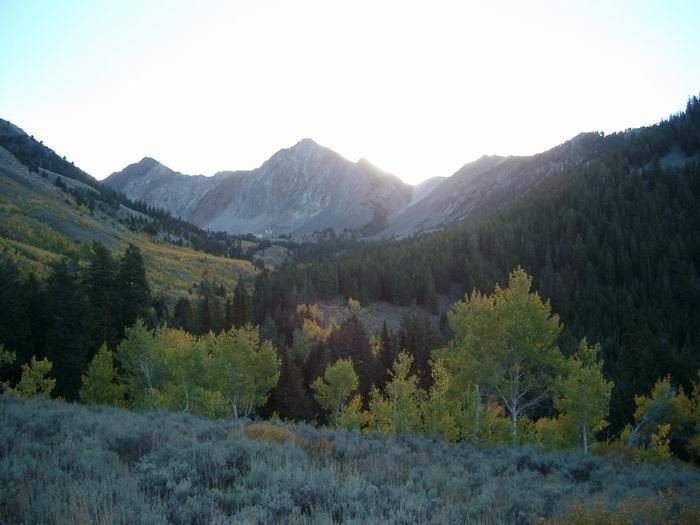 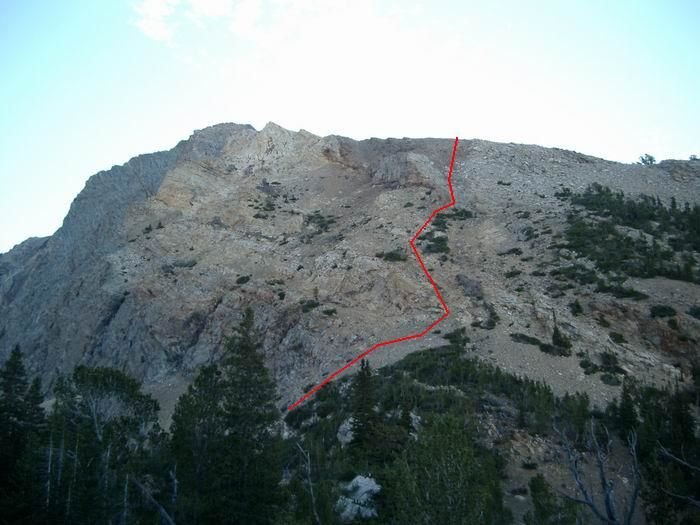 The beginning of the route up Cobb Peak. 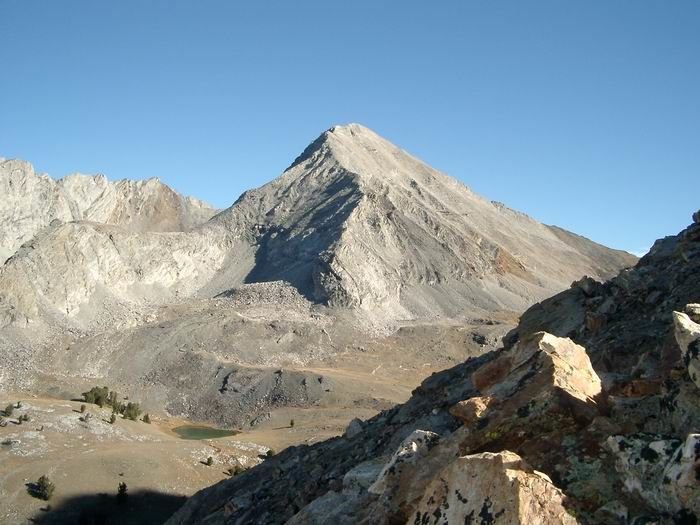 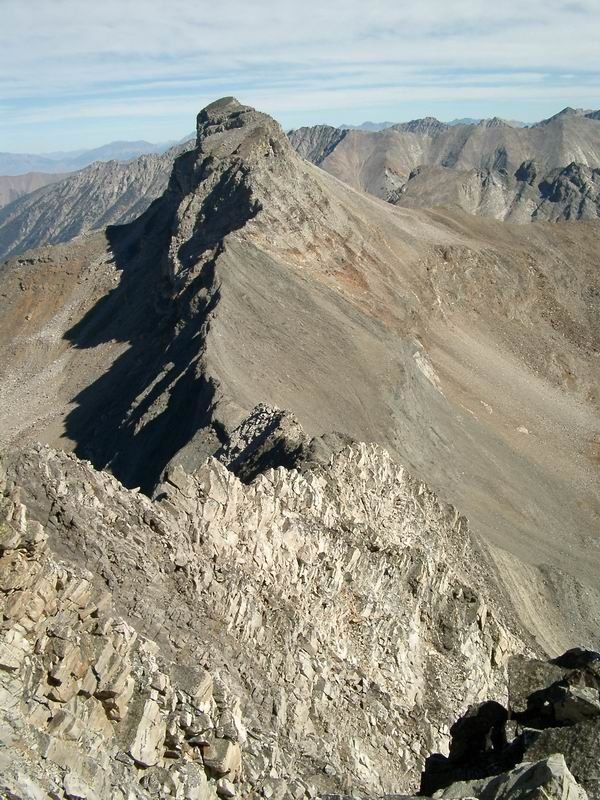 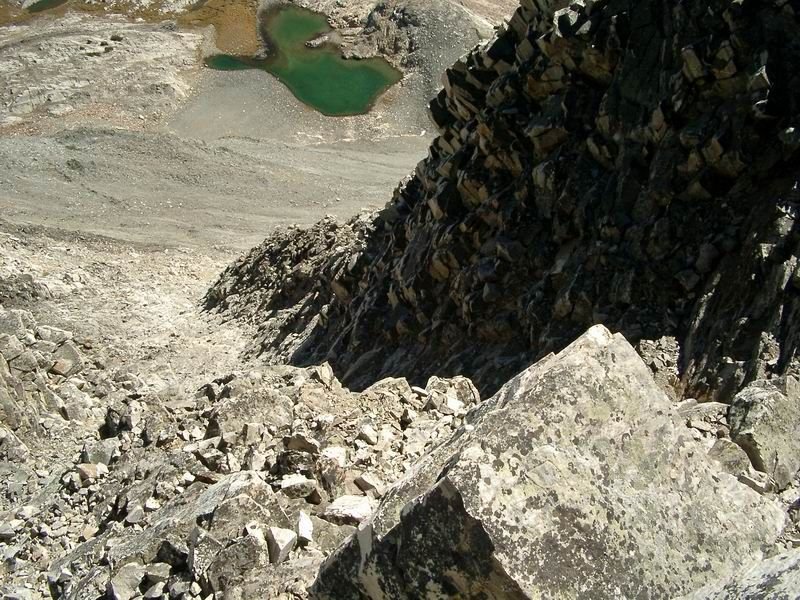 Looking down the route on the east face of Cobb Peak. 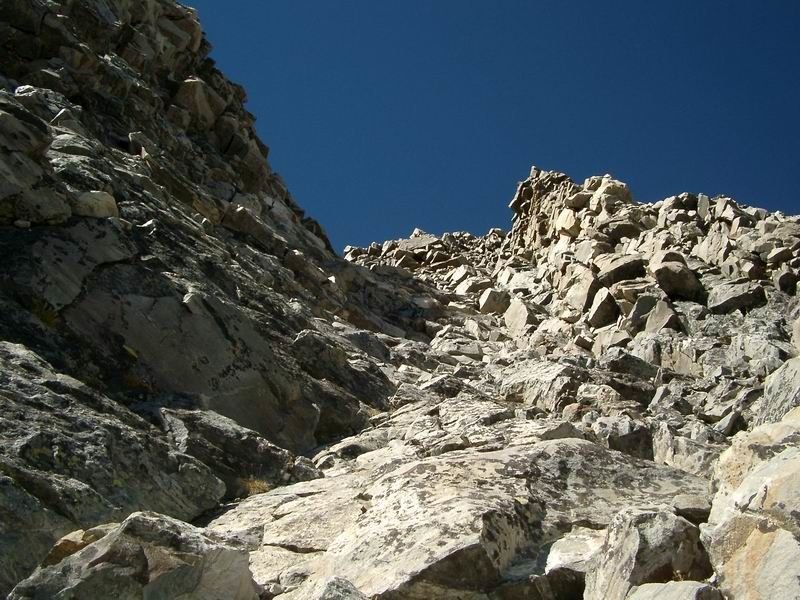 Looking up the route on the east face of Cobb Peak. 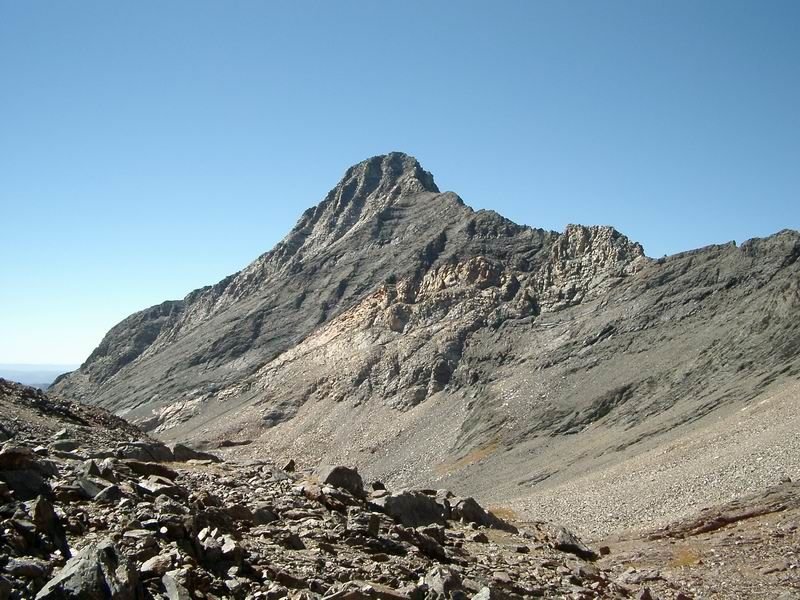 The east face of Cobb Peak from Big Basin. 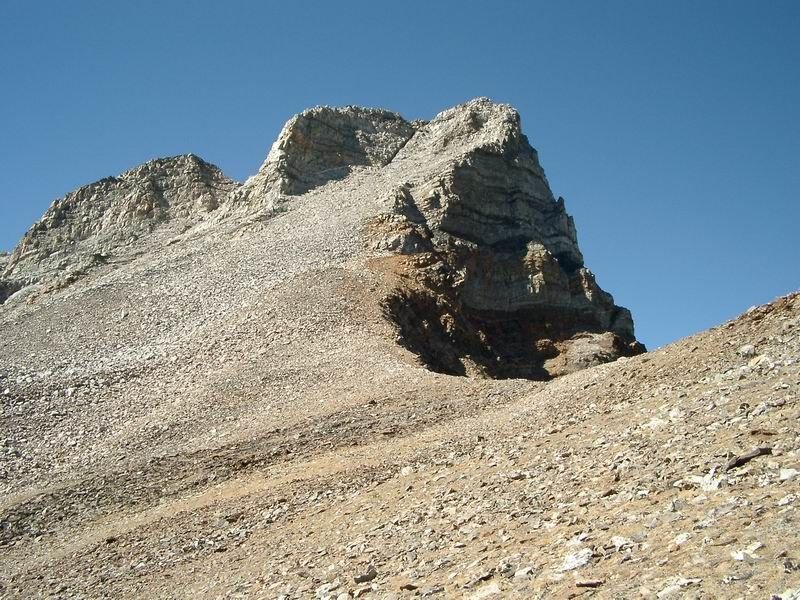 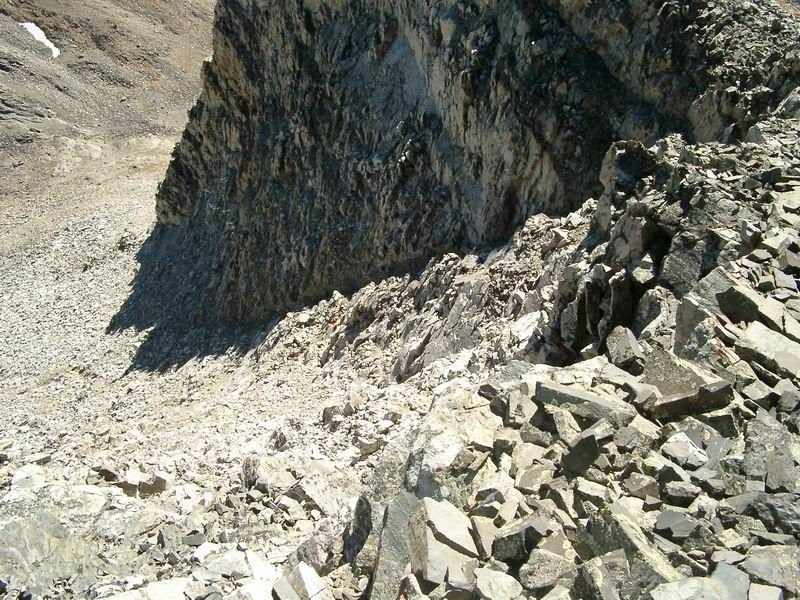 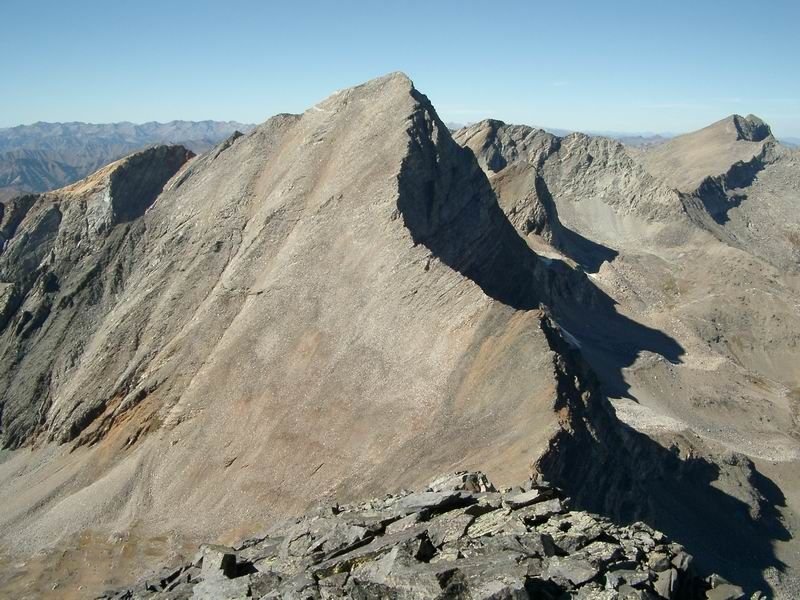 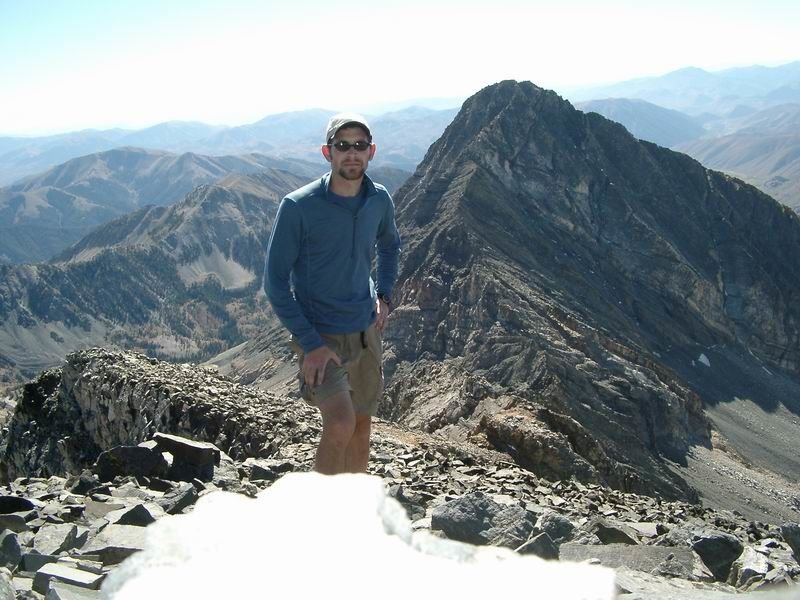