Sine I have been unable to hike as much as I'd like, I have been selected my hikes carefully.  This trip allowed me to get to the top of two 12ers in one hike.  The eighth tallest mountain in Idaho is Donaldson Peak at 12,023', and the third tallest mountain in Idaho is Mount Church at 12,200'.  Although this was not the most physically challenging climb that I have been on, it was definitely the longest in terms of time.  Bruce and I spent 14 hours on the trail with limited summit time.  Hiking in the dark, no trail, going through a creek bed, steep scree slopes, loose and falling rocks, difficult route finding, and considerable elevation gain all contributed to the long hard day.

We drove to the trailhead northeast of the Mackey Reservoir on Friday night.  We camped at the mouth of Jones Creek and started hiking at 5:00 with our headlamps glowing.  After getting our boots wet a couple of times and hiking in the dark for a while, we finally saw the sun start to appear and made our first material change in course at a small cascading creek.  From here, there was a long steep scree slope to hike which got us to a saddle at 10,000'.  The scree and talus here was stable and footing was not a problem.  Once at the saddle, we saw four elk and a party of seven hikers in a meadow several hundred feet below us to the northwest.  From the saddle, we aimed for a notch to the northeast that we had to traverse to.  The notch is actually an outlet for a small pond that sits in a cirque below Mount Church and Donaldson Peak.  This section of the hike remained steep, but the footing was less stable and more difficult to get through.

We visited with the other party of hikers we had seen earlier at the dried up pond.  They also thought that they were hiking up Jones Creek.  After reviewing the maps, we determined that Bruce and I were definitely in the correct drainage; however, that didn't make us feel any better.  The other group actually started hiking approximately 1.5 hours after us, but reached the base to the two mountains at the same time as we did.  It was a bit disgusting to learn this especially after following our guidebook directions correctly.  Needless to say, from the timing difference and description that the other hikes gave us, I would recommend their route.  Basically, they bushwhacked up the drainage to the west of Jones Creek below point 10,705'.

The nine of us stopped for a break in the pond and shared maps with each other in order to determine the route we were to take to the ridge between the two peaks.  Relying on a photo from the Lopez climbing guide, we came to a conclusion and started up what became the most difficult section of the climb.  From the pond to the ridge was an extremely difficult and dangerous climb.  In addition to the steepness, the rock was unstable and loose so we tried to spread out in order not to kick rocks on one another.  The going was very slow as we picked our way up the mountain trying to choose the path of least resistance.  Two hikers from the other party made a tactical error in deciding to go too far to the right and ended up on a steep and exposed scree slope.  The rest of us stayed farther to the left and made it to the ridge and Donaldson at approximately the same time as they did, although the two lone hikers had a considerable head start over the rest of us.  Bruce and I spent less than 15 minutes on top of Donaldson taking a few photos before heading back down the ridge.

The ridge between Donaldson Peak and Mount Church is less that 0.5 miles apart, but it take some time to negotiate.  The rock is solid and it wasn't difficult hiking, but it was narrow in sections and the exposure was high on both sides of the ridge.  It took over an hour to get to the top of Mount Church where we signed the summit register, took photos with the old axe handle that remains on top, and celebrated our climb.  At this point, we learned that three individuals from the other party turned back and decided they were done for the day after Donaldson Peak.  Although we were happy with our accomplishment, the work was not over.  We still had to get back down and were beginning to get tired from the long day.  The ridge back towards Donaldson was not difficult to descend, but we took it slow and made sure we had solid holds.  Getting from the saddle back down to the pond proved more challenging.  The four of us descending spread out again, which ended up being a very wise decision.  About half way down, I nearly took out another climber with a basketball sized rock and only minutes later it was my turn to play dodge rock.  Missing me by less than a yard, another large rock almost hit me.

By the time we returned to the dried up pond, we were very happy to be down and stopped to rest one last time before the final hike out.  The scree on the way out wasn't as difficult as on the approach.  We got back to the first saddle and eventually Jones Creek.  Surprisingly, the hike down the creek seemed almost as difficult going out as it did going up in the dark.  But eventually we made it back to the truck and headed for home.  My main recommendations for this hike would be to go slow and preserve enough energy to get back down, take plenty of water, and do not climb these two mountains alone.  The fact that there we saw a total of nine other people on the route was reassuring and helpful. 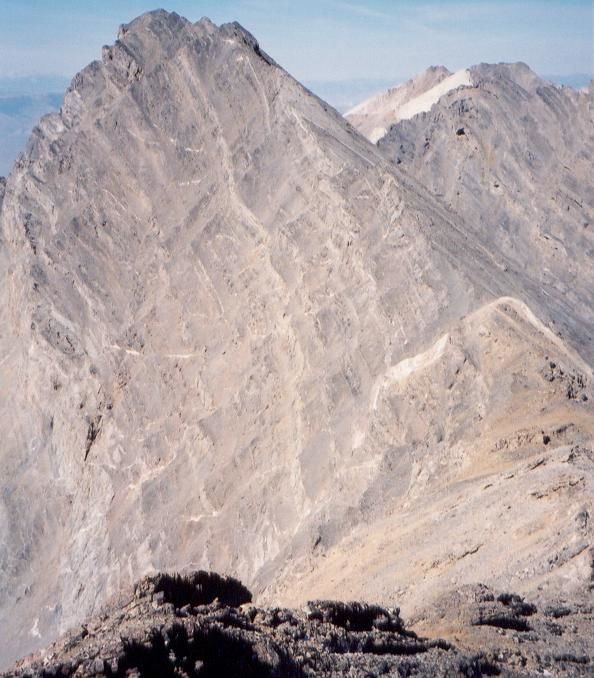 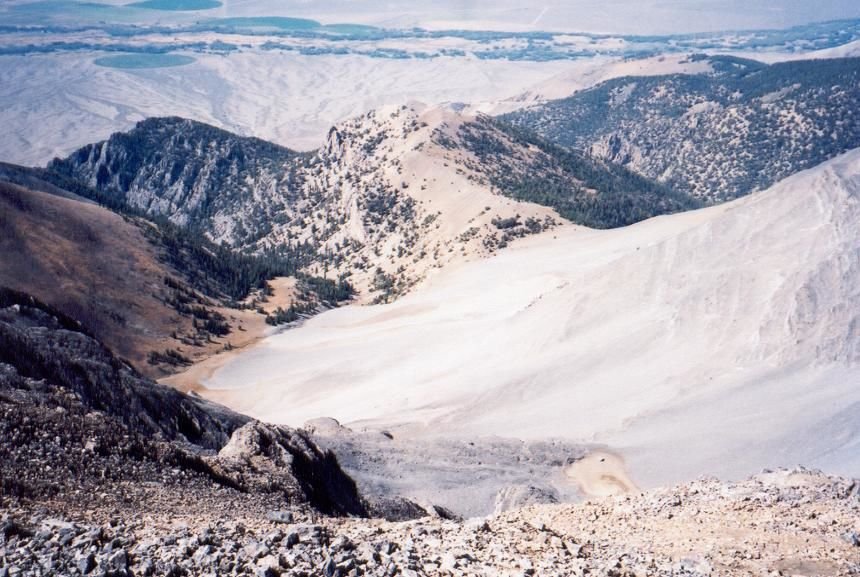 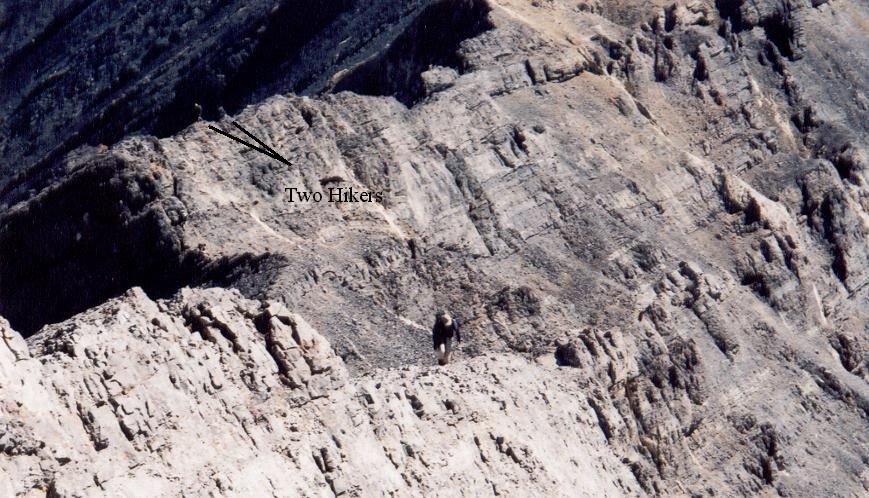 Bruce on the ridge. 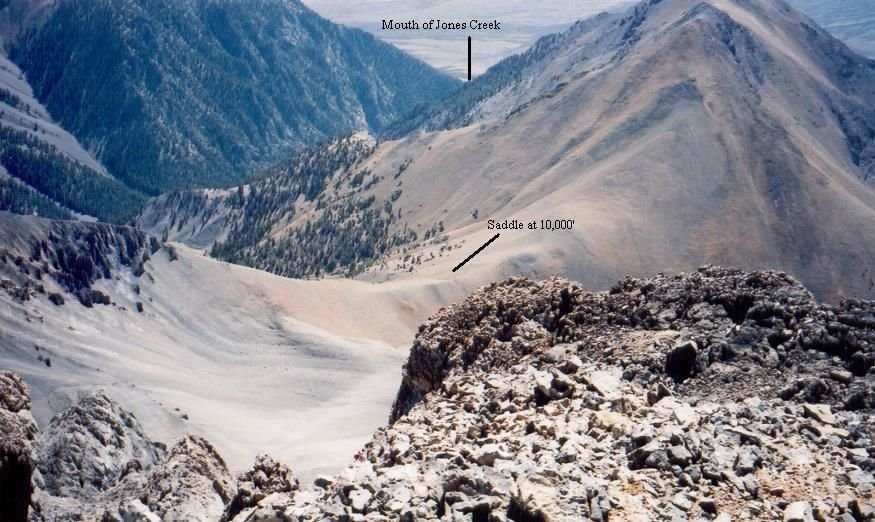 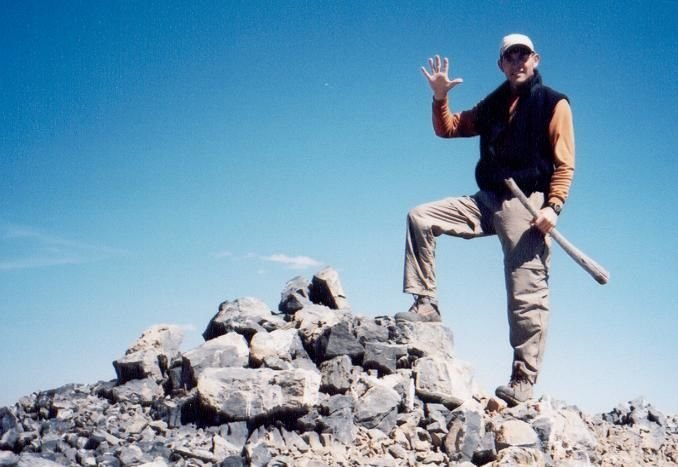