After celebrating with an early beer after hiking Leatherman peak, I headed into Mackay, Idaho, to restock on water and ice.  When I got back to the Mount Breitenbach trailhead, I was finally able to contact Dan on the radio and he informed me that he was just coming off the summit of Mount Breitenbach; it was approximately 11:00 am.  I had a couple of hours to relax as he descended the mountain.  After the Dan returned to the trailhead, we visited a while before we decided to find the Mount Idaho trailhead.  The conditions of this road were similar to that of Leatherman Peak.  A high clearance with four wheel drive is recommended.  Camping conditions at this trailhead were less than acceptable, so we decided to head over to the Borah Peak trailhead for the evening and night.  We realized this would require a 30 minute drive in the morning, but the improved camping location was worth it.

Throughout the evening we grilled some meat, hydrated, and talked with a few people as they finished Mount Borah.  It was decided that we needed more sleep rather than an alpine start, so we set the alarm for 5:15 and went to bed around 10:00.  We awoke as scheduled, and although we didn’t feel too bad, the enthusiasm level had deteriorated from the previous day.  Our interaction during the drive to the Mount Idaho trailhead was abbreviated.  By the time we were ready to hike, it was light out and we didn't need headlamps.  It didn’t take too long to warm up, and I actually thought Dan had set a fairly rapid pace to begin with.  We hit a steep pitch about three quarters of a mile in which slowed us back down.

The hike starts out on a relatively well defined trail and crosses the dry creek on a couple occasions before remaining on the south side.  The initial section of the trail lulls you to sleep because of the easy grade, but as mentioned above, it didn’t take long for things to become steeper.  We quickly gained some elevation and then took our first break.  Surprisingly, we were required to put on our jackets and fleece during our first several breaks because of the cool morning.  The creek curves northeast and soon the trail becomes faint and disappears.  Route finding was not too difficult, but nonetheless some route-finding was required.  We worked our way up the creek until we came to the base of the rib that leads to Point 11,060.  The next section of the trip from the base of the rib to Point 10,400 was steep.  However, the rock was relatively solid and the only alternative was a scree filled gully to the east.  We opted for the rib and after climbing to 10,400’ got our first clear views of the west ridge of Mount Idaho.

From this point, we traversed below Point 11,060 to the saddle between this point and Mount Idaho.  We reread the route descriptions from our guidebooks and analyzed the route before making the last big push to our final 12er.  With approximately 1,000’ to go, the first section stays close to the ridge as you maneuver up and around several towers and blocks.  There were a couple of tricky sections but nothing too dramatic.  Approximately half way up the ridge, we encountered a couple of ledges which deposited us onto the west face of Mount Idaho.  From here, it became sustained class three climbing as we worked our way up the face on solid rock able to avoid any loose scree or talus.  We reached the summit and briefly celebrated our accomplishment.  After reading the summit register, it became apparent that many people have left Mount Idaho for their last 12er.  In addition, many climbers utilize the north couloir for winter ascents.

We snapped a few photos and started the descent.  There were two longer sections on the west face where we were able to glissade down on the scree.  We maneuvered back under the ledges to the ridge and made our way to the saddle between Mount Idaho and Point 11060.  At this point, rather than descending the rib we climbed, Dan suggested we try and speed things up by going down the gully to the east of the rib.  We both took off running and dropped 1,000’ in a matter of minutes.  It was a lot of fun and the few times I looked back at Dan, all I could see was a huge plume of dust.  The loose scree gave way to tighter rock, and we slowed down as we approached the basin below Mount Idaho.

The rest of the trip out was uneventful, although we didn’t pick up the trail until we were about a mile away from the trailhead.  In conclusion, I have to say that I would agree with many who state that Mount Idaho is a classic Lost River hike.  The climb has many characteristics including a trail, route finding, a ridge, class three scrambling, great views, loose scree, and of course a descent amount of elevation gain.  I would have a hard time believing that anyone would be disappointed climbing Mount Idaho. 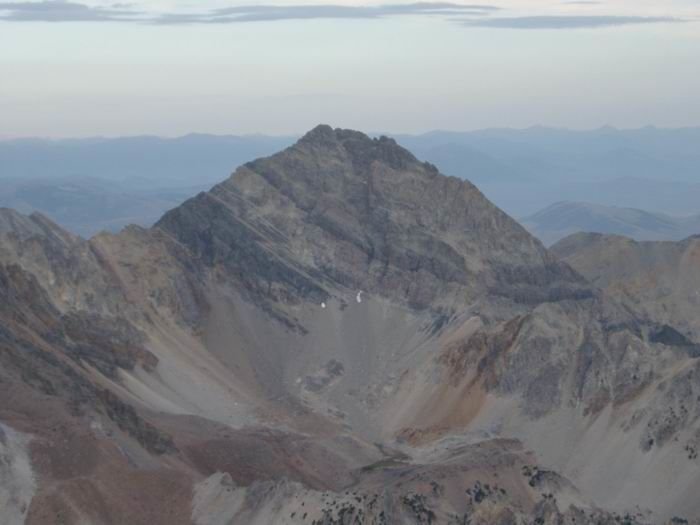 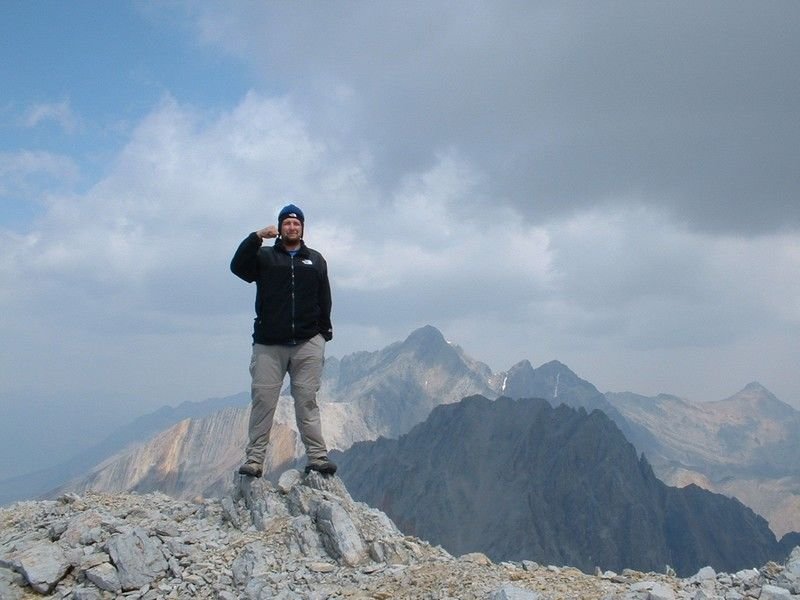 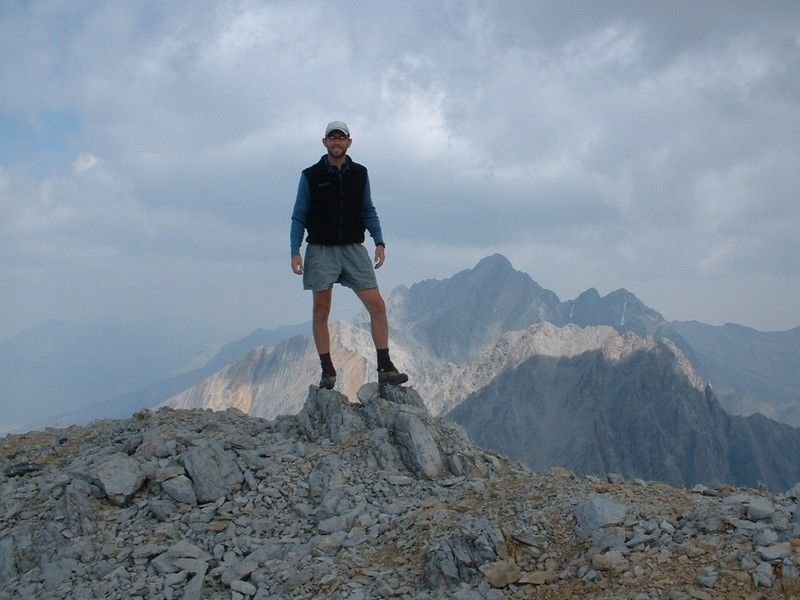 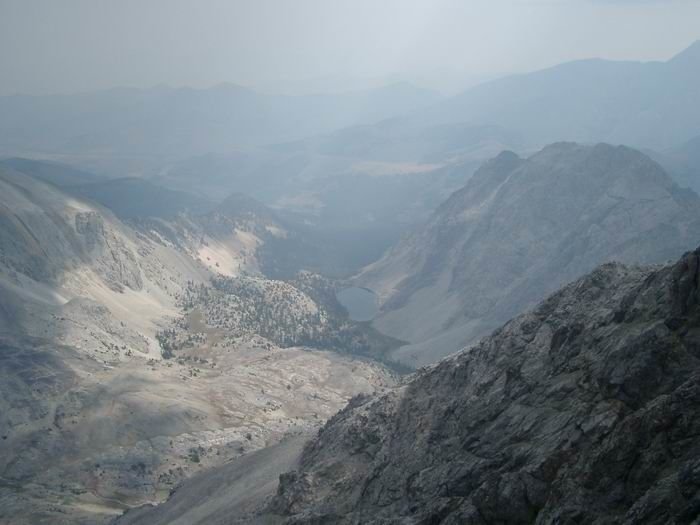 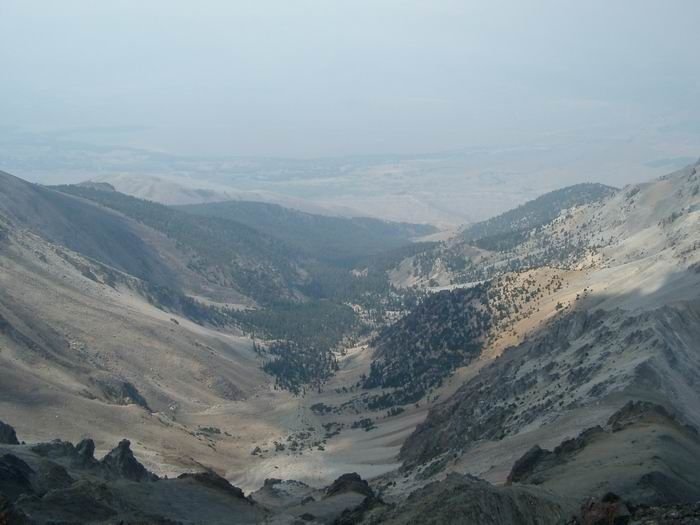